United nations on the Burma Road but no snow on Cairngorms

United nations on the Burma Road but no snow on Cairngorms


First time I was up Geal-charn Mor was in July 2011, along with Moira and my two trusty hounds. Mid summer it may have been but it was a grey overcast day and the wind was cold enough for us to wear waterproof jackets at the top. I thought then it would be good to come back in winter to see the Cairngorms covered in snow. 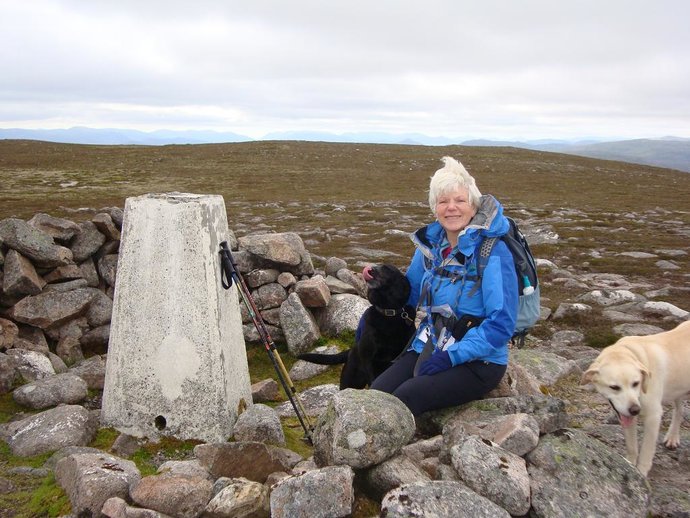 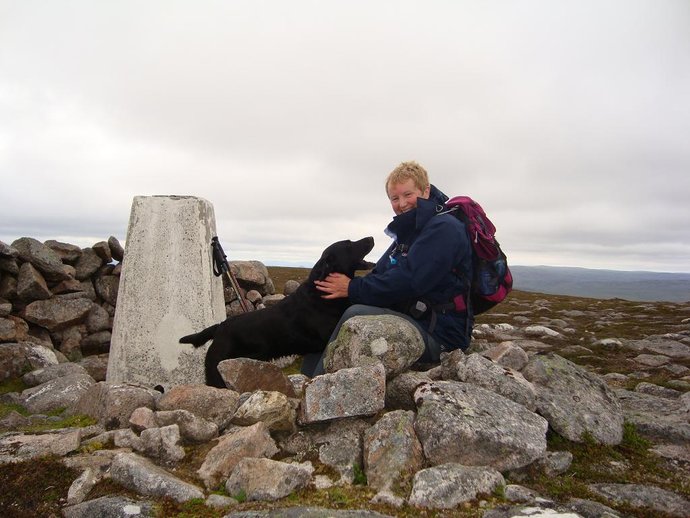 Burma Road and lone pine on the way down The Burma Road was built by prisoners of war in the 1940s and is a right of way from Lynwilg to Carrbridge. It makes it a very straightforward ascent for most of the way and there's an easy to follow path off it to the summit. Twelve of us representing six nations set off to climb it on Saturday 21st January when after a particularly mild spell I knew it wasn't going to give quite the winter views I had originally hoped for! But it seemed a good choice for some of the group who had never climbed a Scottish hill before - as well as for the forecast weather.

Part of the group was running late so we started the walk in two installments, with the second group playing catch up.

Advance party at the parking spot beside the gate It was a beautiful morning and we set off at a leisurely pace so it wouldn't be long before the stragglers caught up. 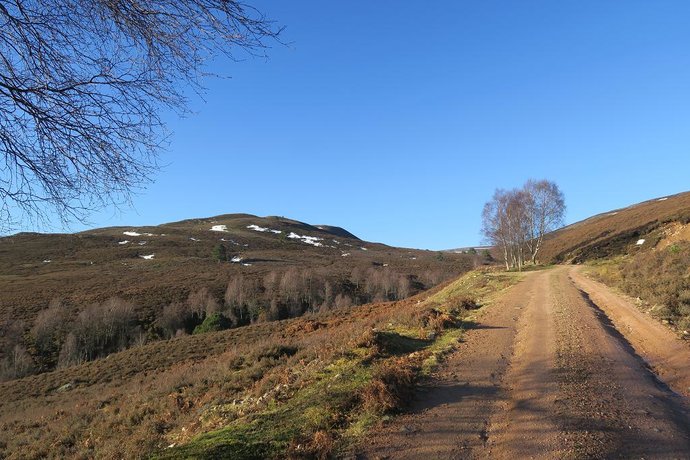 The road stretching ahead up and on to the open hillside 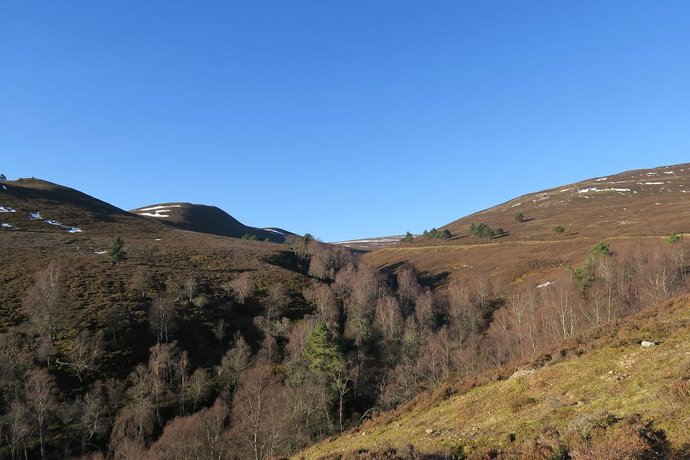 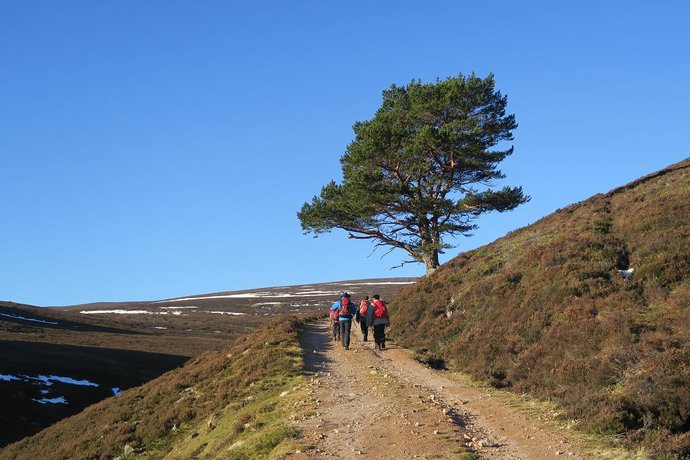 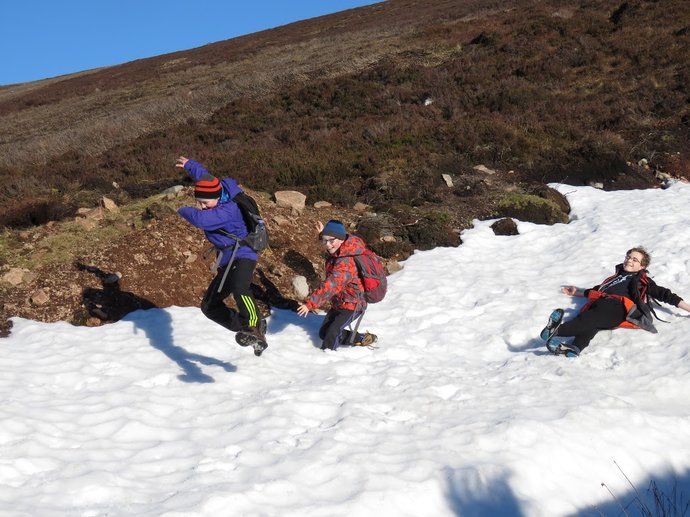 And some on the track 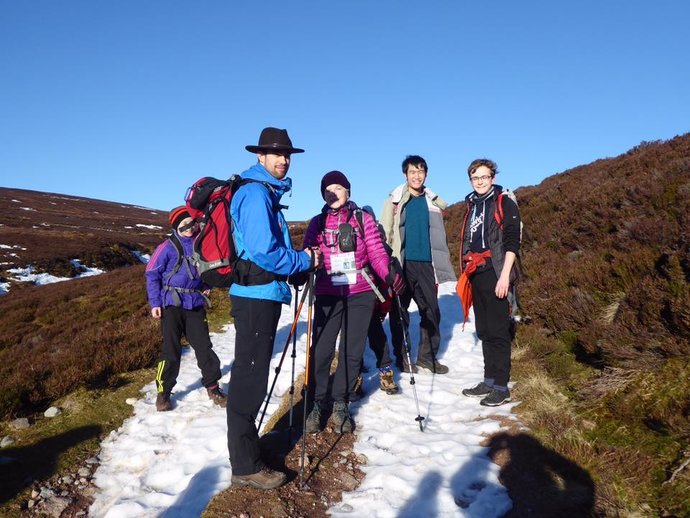 A large cairn marks the high point of the Burma Road before it descends to the River Dulnain and Carrbridge. The cairn also marks the point you leave the road, taking a rough path to the left which climbs all the way to the summit.

Cairn at high point on the Burma Road 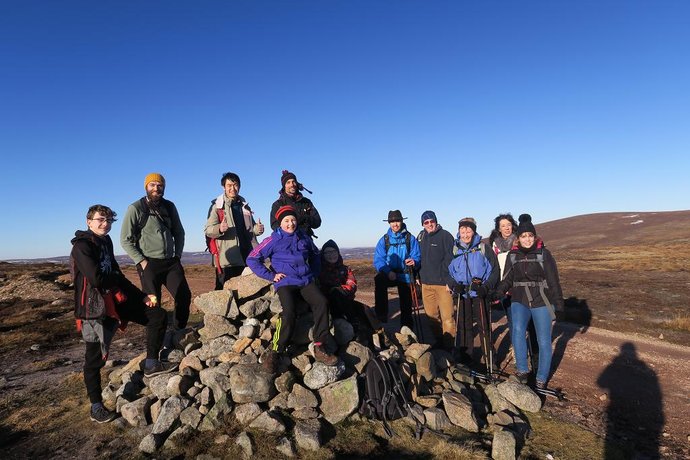 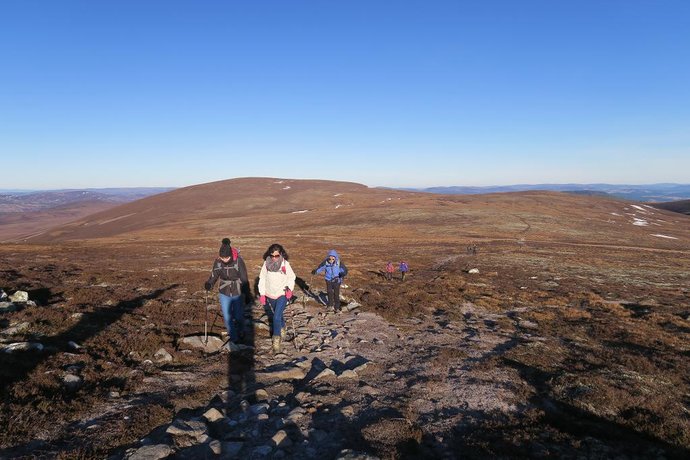 There's a trig point at the summit surrounded by a roughly built wind shelter. The wind at the top was fierce and my grandson had reached the top a good 10 minutes before everyone else and sitting there waiting he became quite chilled. As soon as I clocked how cold he was I gave him my jacket (same one I was wearing at same spot back in 2011), someone gave him a mug of hot tea (he'd already downed the hot chocolate he'd brought) and someone else produced one of those chemical hand warmers (which had been in his rucksack such a long time it unfortunately didn't work). It was great to see the way folk rallied round to help - I love that kind of camaraderie in a group out on the hills together. Everyone looking out for everyone else is the way it should be in life, but so often isn't. 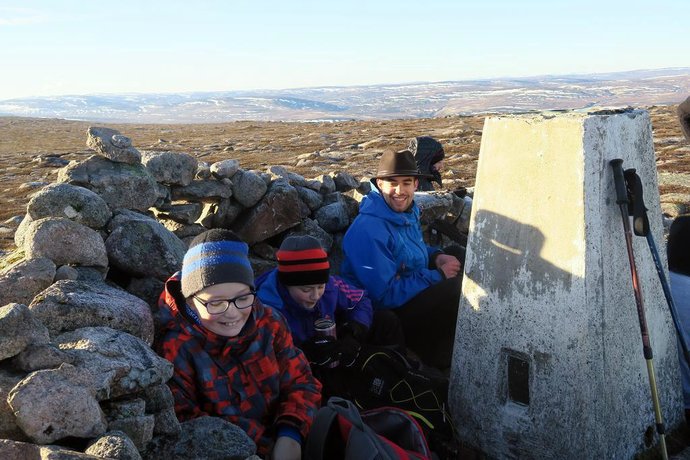 I was kicking myself as I'd brought an extra Goretex jacket in case one of the Spanish girls needed it but they had left it in the car and if Jonny had been wearing that on the final ascent he would have been fine. But as he said himself it was a mistake he would learn from and the next time he was out he had his rucksack full of extra layers he didn't on that occasion need. I wasn't cold but when I took my thick gloves off to take photos my hands were numb in seconds. There was also a fair degree of buffeting - which is my excuse for a slightly blurry summit photo. 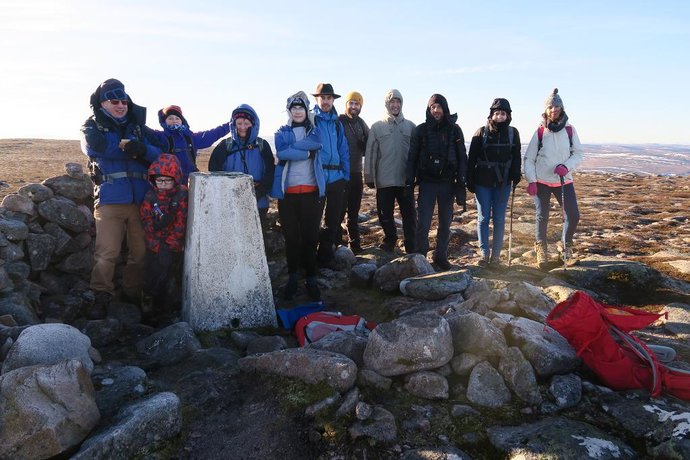 Nationalities represented at the top were Belgian, French, Irish, Malaysian, Scottish and Spanish and the cold wind did nothing to dispel the bonhomie! For some it was their first Scottish hill and they took the buffeting in their stride. It's a great viewpoint - with the Monadh Liath plateau stretching west, Drumochter to the south, Glen Feshie, Braeriach, Cairngorm, Bynack More to the east and Ben Wyvis to the north. But views or not, after lunch at the windswept top we weren't for hanging around and were relieved to head out of the full blast down to the Burma Road again.

Not quite the winter view of the Cairngorms I'd hoped for After walking about 10 minutes I turned to check we had everyone and noticed a lone figure in blue still at the wind shelter. The jacket I'd given my grandson was blue so I thought it must be him and not being sure why he was still there I headed back up, wondering as I got closer why Jonny was wearing Thibault's hat! I then found it wasn't Jonny but Thibault, who was happily playing geocache games with stones while meanwhile the grandson was already well down the Burma Road.

Thibault and the hat On the Burma Road again 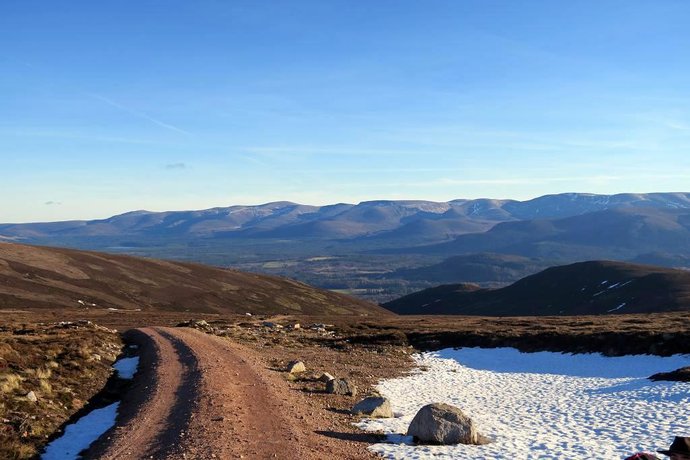 Remarkable lack of snow on high plateau for late January Young Calum on the Burma Road 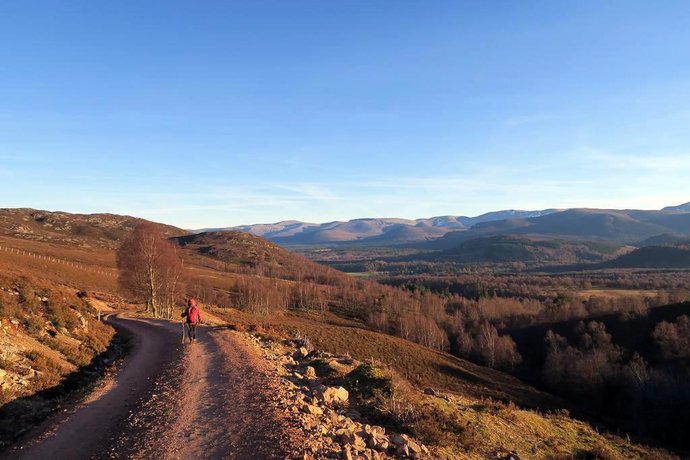 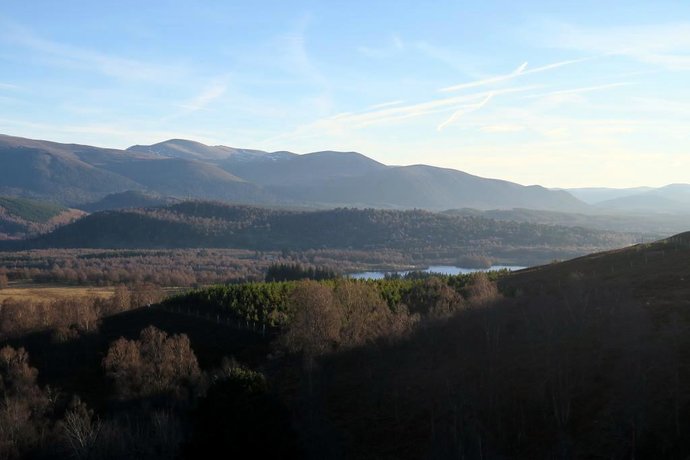 Near to the gate some of the staff at the Alltnacriche SU outdoor centre have set up a stall of home baking along with an honesty box for any purchases made. We managed not to be tempted on this occasion but it's an excellent idea for walkers who've worked up an appetite and I really hope folk don't abuse the trust involved. Instead of goodies from there we headed for the coffee shop in the Aviemore MacDonald resort which had plenty of free tables for all of us. I suspect if we'd gone to the Mountain Cafe we'd have been waiting on the stairs for half an hour before getting in in dribs and drabs.

A good end to an excellent day 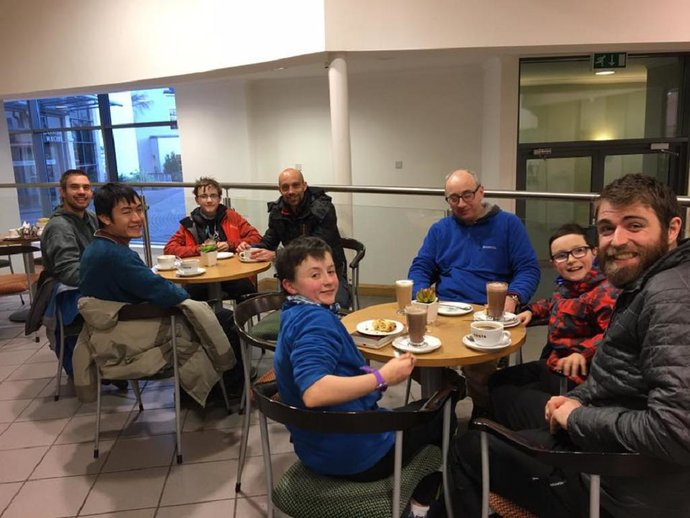 Lovely family story! I laughed aloud at the kids sliding down the snow!

Absolutely astonishing "winter" landscape - are you sure you didn't do this last June???

That sounded like a great walk, and a good fun for all, although I am sure you were getting rather chilly without a jacket. Next time we have some visitor we may well give it a try, thank you.

What a grand day out!

Oh! I recognise some picture...

A good souvenir of a great day!

Oh! I recognise some picture...

A good souvenir of a great day!

Here's one for your family at home 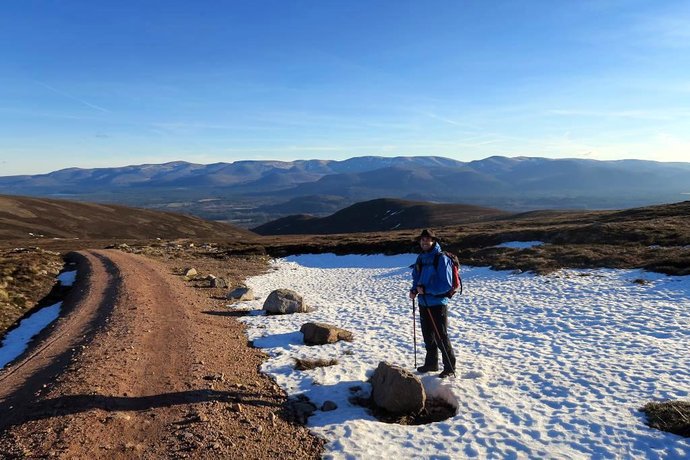 Alteknacker wrote:Lovely family story! I laughed aloud at the kids sliding down the snow!

Absolutely astonishing "winter" landscape - are you sure you didn't do this last June???

It may look it - but it sure didn't feel like June.

Cairngorm creeper wrote:That sounded like a great walk, and a good fun for all, although I am sure you were getting rather chilly without a jacket. Next time we have some visitor we may well give it a try, thank you.

I was fine without the jacket...... but I've got a lot more natural insulation than the grandson has.

Not quite on the level you got on your recent trip north - but yes it was.