A somewhat fraught start to our half day up this small hill as the A84 layby was full up - the next is quite a ways down Loch Lubnaig with no real footpath to speak of. Luckily we gave it a second try and by that time the massive lorry that was taking up 5 or 6 spaces had elected to move on - thank you sir.

The route described on WH is quite obvious and we started up Beinn Each in no time. The ascent is quite steep but the path is mostly excellent, slightly boggy at the beginning but once you start to gain elevation there are no problems to speak of. Don’t forget to look around now and again to take in the wonderful views to the hills behind Strathyre and the view down Glen Ample to Loch Earn. Our original plan was to tackle Stuc a’ Chroin after Beinn Each but on the way up the clouds rolled in and things were not looking favourable. A couple we met who were on their way down had had the same idea but said that there was zero visibility at the top and they had decided against it. We hoped things might improve by the time we got up but if anything conditions had worsened. “Atmospheric” is the word some might use, enhanced by the roars and groans of rutting deer, invisible in the mists - they were having quite a party from the sounds of things. 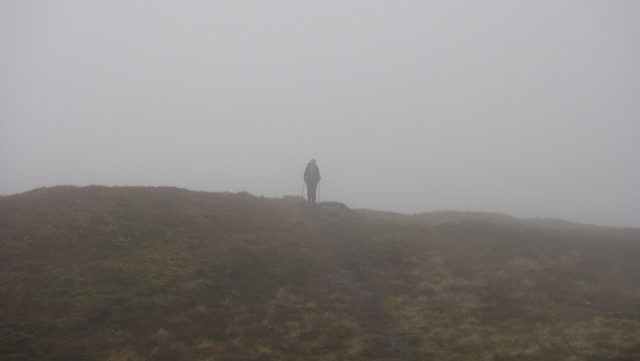 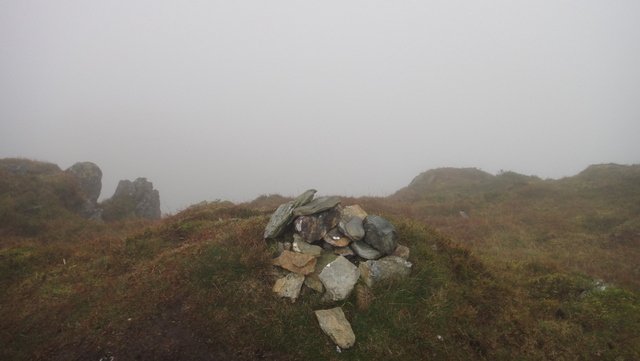 At one point a gust of wind dispersed the cloud and we could see over across Loch Lubnaig to Ben Vane as well as the bealach leading to Stuc a’ Chroin. If the visibility had held we might have attempted it but within minutes it was all shrouded in fog once again. so that's where the bealach is

Dejectedly we let better sense get the better of us and elected to descend from whence we came. This however didn’t deter the gaggle of teens/twenty-somethings who had been plodding up behind us, mostly in trainers and without any gear or, in some cases jackets, to speak of, from disappearing off into the clouds! We didn’t hear anything on the news so presumably their walk turned out OK in the end… Afterwards over a pint of Trade Winds at the Inn and Bistro in Strathyre we discovered that Brian Johnson (he of “Walking the Corbetts” fame) rates this route as “easy” and requiring just 2:30 to complete…hmmm. It's certainly not a difficult climb by any stretch of the imagination but 2:30 seems awfully optimistic. Perhaps Brian also completes the race each May from Strathyre to Stuc a’ Chroin and back - a 22 km route with 1500m of ascent and a course record of 1:59. Ah well, there's always something new to train towards.

BeinnEach_1415636225.gpx Open full screen  NB: Walkhighlands is not responsible for the accuracy of gpx files in users posts