Early pre-dawn start, as the forecast suggested the weather would go rapidly downhill from noon onwards, so I was keen to be doing the same.

Nice combination of moon-light and pre-dawn light looking west from the car park at the gates to Killilan. 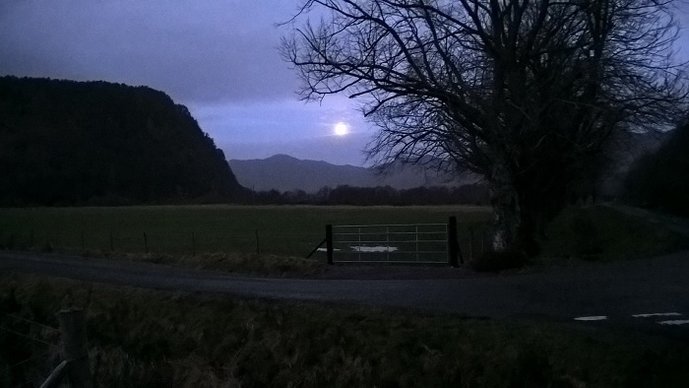 On my bike and off up Glen Elchaig by about 6:45 – metalled road for a while, then well-maintained estate road all the way to the (unoccupied) house at Carnach, with occasional gentle up and down-hill stretches – loads of deer down by the roadside, including a lot of young stags.

Dropped the bike behind the garden wall at Carnach (7:45) and set off towards Allt Coir Easach - the path up past the waterfall became fairly indistinct, but it was no problem to follow the various faint paths, ledges and grassy clambers to reach the upper valley and re-join the main path north of Loch Lon Mhurchaidh.
Delightful easy tramp past the two small lochans in the valley floor as the clouds gradually lifted to reveal views of the impressive entrance to the Falls of Glomach gorge, A Ghlas-bheinn and Beinn Fhada. 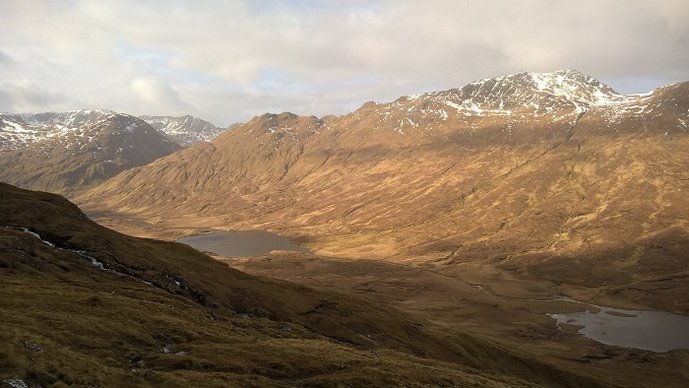 I kept heading south up the glen for longer than strictly necessary, to avoid any snow-related issues on the northern prow of Creag nan Clachan Geala, so was rewarded by fine views of Sgurr Gaorsaic and the Allt Thuill Easaich waterfalls (which are surprisingly absent from the map).

I then made a straightforward ascent almost due east to the summit of CnCG, with neither snow or any rocky outcrops causing any probs and ever-improving views of Beinn Fhada and the Glen Shiel hills to give me an excuse to pause for breath when I needed one. Reaching the summit of CnCG, the entire north ridge of Sgurr nan Ceathreamhnanananan popped into view and confirmed that I was going to have a successful and fun-filled top-ticking trip. 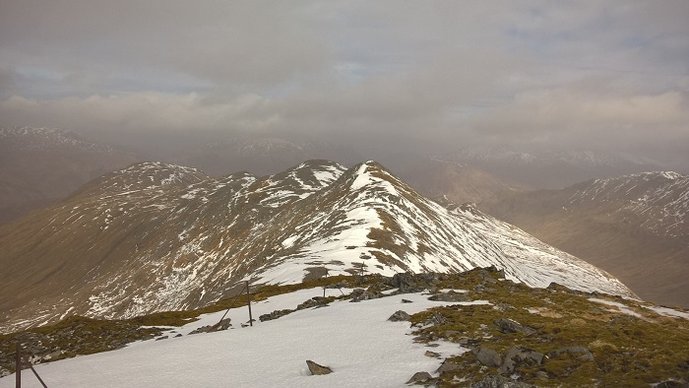 View along the North Ridge

An easy stroll led to SnC’s western Top (12:00 noon) and the spectacular view of the main Munro summit. 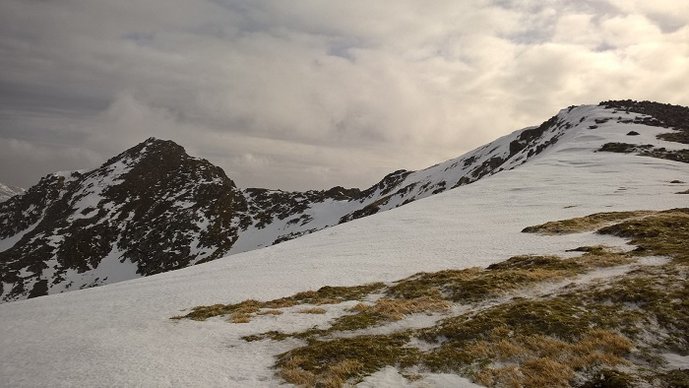 SnC from the North Ridge

I didn’t bother with the short diversion which would be needed to include the Munro in my itinerary for the day, as I had ticked it (and most of its other Tops) from the Alltbeithe side many years ago.

Quick bite of lunch, but didn’t linger, as the wind was cold and getting stronger/more-unpleasant by the minute (as per the forecast), so a pleasant (but slightly chilly) yomp along the ridge to bag each of the three Tops (Stuc Bheag, Stuc Mor and Stuc Fraoch Choire) in turn, taking approximately half hour for each), a quick last look at the great views to the north and east (including the interesting ice patterns on Loch an Fhraoich-choire – see pictures), View back along the North Ridge before an easy descent west into the upper glen to pick up the path at the north end of Loch Lon Mhurchaidh - slightly boggy in places, but no problem.

Followed the good path back to the top of the Coire Easaich, but did not see the left-hand branch (which might have disappeared?) so I ended up making my own way down the very steep valley wall towards Carnach. This was distinctly unpleasant and I would not recommend it, particularly if you were trying it in the wet, dark or when it was covered in snow. Following the main stalkers path out to the north-east is probably quicker (and certainly more fun) than all bum-sliding and clinging to birch trees that I needed to get me safely back to the valley floor.
So, if anyone wants to be useful, can you build a wee cairn at the junction of the two paths at the top of the Allt Coire Easach waterfall and/or go up and down this ‘direct’ route a few times to make it easier for old duffers like me to find something resembling a path down this ‘cliff-face’.

Anyway, I got back to Carnach about 3:15pm (ie after 7.5 hours walking) and had another hour of cycling into a strong head-wind all the way back to Killilan (where a dog-walker became the only person I’d seen all day) and the lovely drive back along Loch Long to the A87 at Ardelve & home.

An excellent day-out resulting in another set of missing Tops successfully mopped up – 23 walks to go!

Ceathreamhnan_Northern_Tops.gpx Open full screen  NB: Walkhighlands is not responsible for the accuracy of gpx files in users posts

Enjoyed that. Doesn't matter where you do it from, I did it from Glen Affric car park, its a big day out. Well done!

We did it on the first day of the "Foot and Mouth" closures, with special permission. It was amazing, crisp and cold under blue skies all day.