The Great Plan and The Tenth Munro

The Great Plan and The Tenth Munro


When I have a detailed plan it is probably considered by others to be merely broad strokes with a brush, but I don’t seem to change. I do my best thou… I spend a lot of time studying the map planning on how to do 4 Munros, and make my way from Tyndrum to Dalmally in a two days walk. In particular I studied area of the map between Ben Oss and Ben Lui in order to find out the best path, I even asked here on the forum if it would be possible. In my mind I had a detailed plan… So last Friday I left work early and took the Oban train to Tyndrum. I figure I would reach there approximately before sunset, but as the train passed the banks of Clyde, and further the strand of Loch Long, it became evident that the sun was going down more quickly than I had anticipated.

Up at Crianlarich it was dark, and in Tyndrum it was raining as I stepped onto the platform. I used my phone to locate the west highland way, and began walking south along the river that is passing through the small village. I was looking for a campsite and would you know, right on the other side of the river, I could see flat grounds great for a small tent like mine. I thought it perfect, walked over a small bridge to reach the site, but before I knew it a car with full headlights on snuck up behind me.

I could barely see the man in the car as my eyes tried to adjust to the bright light, but I didn’t really need to because the anger in his voice was clear enough, and he chased me off his camping ground. My apologies sir! And the error was evidently mine… Of course I had seen all the caravans, the huts, and the shop, as I passed the bridge, but in my mind neglected the possibility of there being a fee to pay, and that it was my responsibility to find out. Instead, I took it for granted that no one would bother or care about one single soul and where that soul spends a night or two.

Pitch black, back to the track, I walked down the river and left the village according to instructions from the curator. My head torch cast LED light upon the forest and the track, it made the rain look white like falling snow, and caused dancing shadows between the tree trunks to appear. Outside the village and at the edge of the forest, I found a place where I could raise my new ultralight weight tent. It was done quickly even in the dark, and I soon found myself in the dry. Being not far from the railway track I could hear the characteristic sound of trains passing by in the night, and I came to think about a homeless bum I saw in India who was sleeping next to the highway outside Mumbai, and I gave myself the honour to consider myself to be little bit like him… The night was a success; I only woke up once because of the cold, but being prepared I had an extra shirt packed!

Next morning I woke up at 8am and hurried to pack my gear to get back onto the highland way, and make my way to the track leading to Ben Oss. I passed by the loch of the lost Sword were Robert the Bruce threw his Claymore after losing a battle nearby. I passed by the actual battlefield and considered myself lucky to be wandering in the Tyndrum valley without any battles to fight, but instead free to enjoy the great views, the fresh morning air, and the sounds of the river and the robin birds. 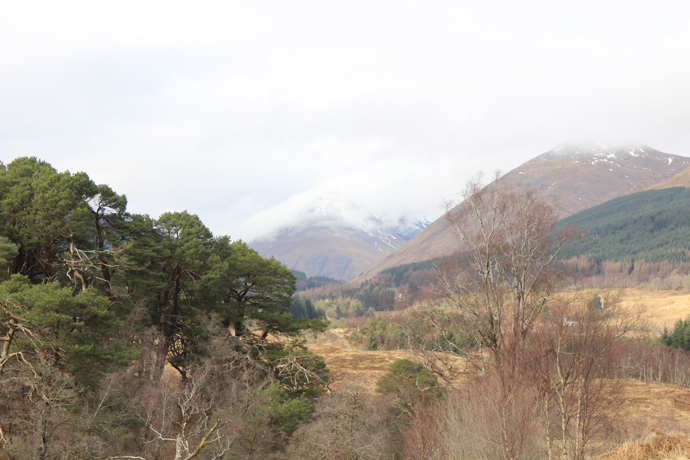 To get to the trail leading to Ben Oss one has to pass the Fillian river and also the railway track that goes between Crainlarich and Tyndrum . All is done following a nice little road further leading you through open landscapes with views of Beinn Odhar to the north, and eventually to an inviting grove of old pine trees. Before reaching the woods, the idea is to head of the road and pass river Cononish to reach the track leading towards Ben Oss. A "bridge" over Cononish

I did a quick google search on my phone to find out if there is some way, unknown to me, to pass a bridge looking like this one… maybe it is a trick to it? I also, for a moment, thought that one could pass it in a careful balancing act, but decided it to be a stupid idea as the iron bars also were slippery.

Instead I thought the stream would become thinner higher up the mountain, and that there must be one or two sections along the stream where I could gracefully jump it. With this in mind I stayed close to the stream and began walking towards Ben Oss and Beinn Dubhchraig. I entered the grove and got fascinated by the old trees, and I follow trails made by sheeps and deers through soggy under vegetation. My theory seemed correct, and for every little ditch and stream connected to the river that I passed the greater river was getting thinner.

Even if it was only a branch of the initial river the stream was still not thin enough for me to jump it. This branch of the river is called Allt Gleann Auchreoch, and luckily I eventually found a foot bridge. It was the same design as the previous bridge but this time with a few wooden boards between the metal bars. I was finally across but now quite far away from the track and I began to walk straight westward to find it. In this way I crossed the old forest, and I eventually reach the other branch of the River called Allt Coire Dubhchraig, and there on the other side was the path to ben Oss to be found. Still the stream was to wild and I could simply not see an easy passage over it. I could do little but to continue on the boggy side of the stream glancing towards the other side and the dry gravely path that I initially had thought to follow. I reached higher grounds, and even if the slopes themselves where still covered with frozen patches of snow, the stream would simply not thin out. Waterfalls of the river

By now I was half way up the slopes towards Beinn Dubhchraig and simply decided to ascend Beinn Dubhchraig off track. It was a wet and tiring story, and I was way behind schedule when I reached 800m where the mountain was still completely covered by snow. I barley had to use my ice axe because of the gentle ascent, and every step in the melting snow was firm.

The snow and the dense fog lit from behind by our great sun, made it immensely difficult to see much or to distinguish anything but faint contours of the mountain and some of its larger rock formations. I find this to be a fascinating situation to be in, because although I am safe and that I know my way perfectly (GPS), and although that I am fit and careful, there is still this feeling of unease and perhaps fear that forms in my mind when the mountain turn out to be far too different from what I usually experience my everyday life. I think it might be an effect of ventures that takes you into the unknown, at a certain point if you leave what is known to you behind, and completely end up in a to you unknown situation you will be “afraid” or feel uneasy. Sight deprivation, exhaustion carrying a large backpack up a snowy mountain, being far away from home, being by myself, are all factors forming, to me, something unknown… something that makes me feel afraid.

So what do you do… turn around… Go back down? Well why not, that’s always an option and perhaps the most sensible one. The other option is to continue, that is to find your strengths and overcome the obstacle. That is to be rational, to be brave, to be determined, and to be intuitive; that is to slowly make what is unknown and frightening to you, into something that is understandable and known, and something that you can control and even master. I made it up to the summit, and I had already given up walking all the way to Ben Lui and was not even sure if I would make it to ben Oss, because it was already well past 2pm and the slow off track ascent had drain all of my energy. I took a few steps passed the cairn, in the direction towards Ben Oss, and then I stopped, and I turned back.

As I was returning down to the valley now known to me from before, it was difficult to tell if my mission had been a failure or a success, and maybe it is fair to leave it undecided. Weeks before this walk I had planned and even dreamt of walking really far and camping in the wild, and obviously I didn’t even come close to this plan. On the other hand, I had made it up my tenth Munro overcoming some worries and obstacles on the way, and I had successfully managed to camp with my new tent.

I guess it is fair to leave it undecided, because it feels like all these plans and dreams of mine aren’t really meant to be fulfilled, maybe they are only there to point me in a direction, and that I like to keep them free from details and from a determined faith. Free from a judgement...

Re: The Great Plan and The Tenth Munro

Fascinating and though-provoking story. Any trip where we experience the wilds, learn a little, and return safely is definitely a success.