There's no doubt that Cruach an t-Sidhein - the Fairy Knoll - is very much the Awkward Customer of the eight Luss Grahams, and it has become something of a bête noire for me. Almost exactly three years ago I set out to attempt the classic round of the four central Luss Grahams from Luss on a cold but clear March day, only to have to give up on Cruach an t-Sidhein due to a combination of, to be frank, knackeredness after the first two hills

, plus a shedload of snow on the Cruach's steep eastern slopes which made it look a tad risky. Since then, I've planned to bag the Cruach on several occasions, only to have my plans thwarted by unexpected traffic chaos, sudden unforecast storms, civil unrest and what have you

- I've been starting to think that I must have inadvertently offended the Good People at some point in the past, and that the Sidhein clearly don't want to be disturbed by the bobble-hatted one

...
On this occasion, I'd initially had vague plans to have a look at a dull-but-relatively-easy Munro, Carn Bhac, that I still had to do. However, the weather forecast for this weekend was unexpectedly poor even by March standards, and also the early rise and long drive that would be required didn't greatly appeal after a busy week at work. So, needless to say, my thoughts turned yet again to the dreaded Cruach

. It looked like I was going to be in for a soaking, but I decided just to don my waterproofs and prepare for the worst that the Sidhein would be able to throw at me.
Cruach an t-Sidhein is not a particularly hard hill in itself (it's a steep and shapely, but predominantly grassy hill): the problem is the tricky spot it finds itself in, tucked out west as an awkward outlier to the main horseshoe of Luss Grahams. It is accessible, but just as much of an awkward outlier, if tackled from the south as an extension of the Beinn Chaorach / Beinn a'Mhanaich round. On the map, an approach to bag it as a singleton up its long north ridge from Cona Glen looks appealing, but then there's a substantial MOD presence in Cona Glen, and they don't particularly welcome visitors

. The most uncomplicated way of tackling it is probably as a fairly long but otherwise straightforward round from Luss along with Beinn Eich and Doune hill, so that's what I went for, despite the fact that I'd already done the other two hills.

our_route.gpx Open full screen  NB: Walkhighlands is not responsible for the accuracy of gpx files in users posts
It wasn't clear to me whether or not the steep pay-and-display charges in the Luss village car park still applied at this time of year (the signage was distinctly unhelpful and I didn't want to take a chance on it), so I ended up parking in one of the loops of old road off the A82 just north of the village. Parking on the Glen Luss minor road is definitely limited, and probably more hassle than it's worth. The roadside walk along the verge of the busy A82 wasn't particularly pleasant but thankfully was fairly short. Soon enough I was on the Glen Luss minor road: a long road walk to start the route, but quite a scenic one. The sleeping giants were just beginning to raise their heads from the morning mists, and so far the rain was holding off. ), it's nice to be able to record a good-news story. It is well known that mosses and lichens act as barometers for air pollution, with lichen in particular flourishing only in clean air. Luss is less than an hour's drive from central Glasgow, yet the luxuriant growth of moss and lichen in this area shows what the Clean Air Act has done for air quality in the Glasgow area. It wouldn't have looked like this sixty years ago, I bet! After yesterday's heavy rain, a wee waterfall on one of the burns to the right side of the road was looking more impressive than it probably usually does. 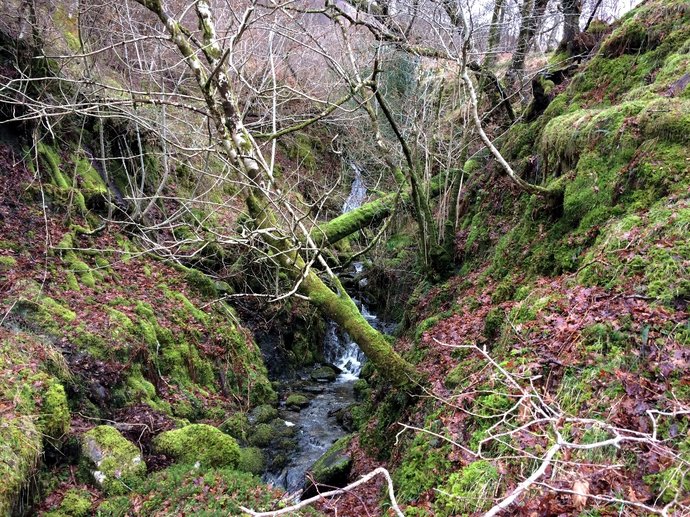 Spring had definitely sprung in Glen Luss, and the whin bushes were in full bloom. A bit further up the road, there was a nice view of Edentaggart Farm, with the nose of Beinn Eich rising hazily up behind it. Eventually I reached the pleasing wee bridge over the Glen Striddle burn just before Glenmollochan Farm, decorated with a stone carving of a sheep's heid. Some nice waterfalls here too! I headed on down to the lower bridge over the Glenmollochan Burn, then took the signed path for Beinn Eich across a stile a couple of hundred metres before Edentaggart Farm. The Clag soon started to close in, but there was a hazy view across the steep-sided Glen Mollochan to Mid Hill / Beinn Dubh on the northeastern side. A bit higher up the ridge, there was a pleasantly indistinct view back down Glen Luss to the south end of Loch Lomond with its many islands. A bit more grassy trudging, and I emerged rather suddenly at Beinn Eich's small but perfectly formed summit cairn, with the summit environs looking rather soggy today after yesterday's downpour. As I headed down northwards from Beinn Eich's summit cairn, it was time for Revenge of the Sidhein

: the weather took a sudden turn for the worse, with driving sleet and very poor visibility. However, I pressed on regardless, and it wasn't long before I was down at the bealach between Beinn Eich and Doune Hill's southwest top, which is known as Beinn Lochain. At this point, the Fairy Folk either decided that I wasn't going to be deterred, or maybe that I had passed some kind of test

, because the rain relented and the clouds even parted momentarily to give me a glimpse of my next target, the Beinn Lochain / Cruach an t-Sidhein bealach. 'Moments of clarity are so rare', as Björk tells us, and that's certainly true when walking in the west coast of Scotland in March

! I was very relieved to get a quick glimpse of where I was aiming for, as otherwise navigating this next section could have been a bit of a challenge. The Clag soon descended again, but the traverse round the southwestern flanks of Beinn Lochain to reach the slightly higher bealach with Cruach an t-Sidhein proved to be a straightforward enough trudge, although further than it initially looked.
Eventually I found myself at the foot of the Cruach at last, where the clouds parted once more to give a nice view north down Cona Ghleann. Cruach an t-Sidhein has a tempting-looking north ridge which is clearly visible in this view, and this would certainly be a feasible approach to bagging this hill on its own, although parking at the start of the route could be tricky, plus the various mysterious MOD-related installations down Cona Ghleann might give pause for thought

- probably not the best route for communing with nature, anyway! The ascent of the Cruach, although continuously steep and pathless, was straightforward enough, and I reached the summit cairn at about quarter past one - only a tad behind schedule so far, and quite good going by my standards

! The cairn itself proved to be a pleasingly unusual one, constructed out of odd fibrous-looking boulders that almost resembled petrified logs

. Anyway, I was delighted to get this one bagged at last It was a quick descent back down the way I'd come up, to the Cruach an t-Sidhein / Beinn Lochain bealach, where there was a hazy view back to the Cruach. It must be a rather shapely hill when you can see it properly... From here, the re-ascent up Beinn Lochain was just a steady plod, with a path soon appearing to aid my progress. All the same, it was quite a relief to top out on Beinn Lochain's unmarked and rounded summit. From here, it was only a short pull up to the north-east to reach Doune Hill's summit trig point. This is the highest point in the Luss Hills, and a grand viewpoint on a clear day, but there was nowt much to see today! Just a couple of hundred metres northeast of the cairn, however, the clouds parted once again to give a good view over to Doune Hill's northeast Top, with the north end of Loch Lomond away in the distance beyond it. To the south-east, there was a pleasant vista of the south end of Loch Lomond with all its islands, directly to the right of Mid Hill / Beinn Dubh. I made my way carefully down to the bealach with the NE Top - it's a fairly steep descent, and it was a relief that there was absolutely no snow on any of the hills today. Down at the bealach, a couple of wee boggy lochans provide useful navigational markers: the easiest way down to Glen Mollochan is to follow the outlet stream down southeast from the bigger of the two lochans. There was a fine view right down Glen Mollochan to Glen Luss and distant Loch Lomond on descent. It was a long way down, and it took me a bit longer than I bargained for. When I eventually did get down to the boggy depths of Glen Mollochan, I was struck by how big Mid Hill / Beinn Dubh was looking when viewed from its very low bealach with Doune Hill, and I was decidedly relieved that I wasn't attempting the Classic Luss Round of all four Grahams! For the likes of me, that would be a fairly major undertaking, and probably one that would require a long day in the summer. I can't say that I regret splitting this group into two outings, even if it meant that I ended up climbing two of the hills twice Glen Mollochan is thankfully rather scenic, as this first section was a bit of a boggy trudge down a faint and intermittent path, with frequent entertaining tributary burns to hop over inelegantly About halfway down, the boggy path reluctantly evolved into a proper track, although it was still rather wet and rough. Ah well, I was feeling a bit wet and rough myself by this point... The cloud base had finally started to lift properly, though, and there was a good view back up northwest, with Beinn Eich to the left and Doune Hill just keeking through the Clag at the head of the glen. I was relieved to finally make it back to the car, and also very glad indeed to have gotten Cruach an t-Sidhein bagged at last