Brack "The Blowy" and Cnoc of False Summits

Brack "The Blowy" and Cnoc of False Summits

Corbetts included on this walk: Cnoc Coinnich, The Brack


Working in Helensburgh on a Saturday morning means that I'm already nearly at the hills... a perfect excuse. And even though the forecast was not great, the Knee Recovery Programme demanded hills. Scouring the map for something close by I realised that Arrochar was less than 30 minutes up the road, which gave me plenty of time, if I got a move on and didn't get lost

I've never been exactly slow despite the injury, but there's something about having a deadline....

As I drove up the Loch Lomond road there was a beautiful rainbow across the Loch. A good omen perhaps? I parked at Ardgarten and booted up, leaving off the waterproofs more in hope than expectation, although it wasn't actually raining as I set off across the bridge and turned right along the track. 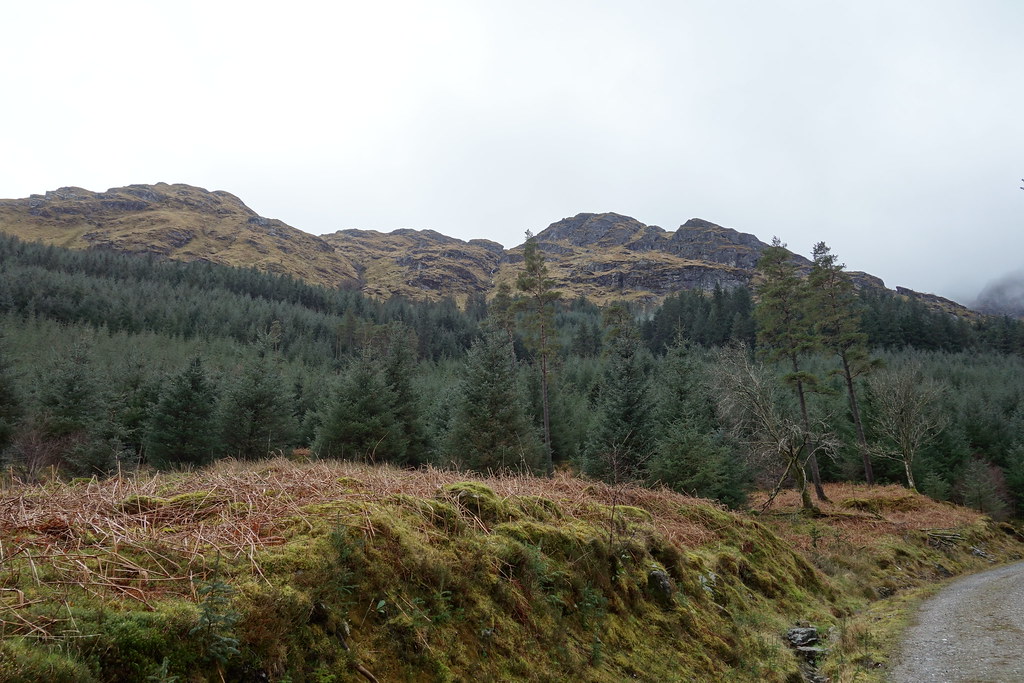 It did look to be clearing, despite the forecast which suggested the morning would be better (I met a few people shortly who confirmed that hadn't been the case

It was an easy walk along the track and views started to open up a little as I began to climb. 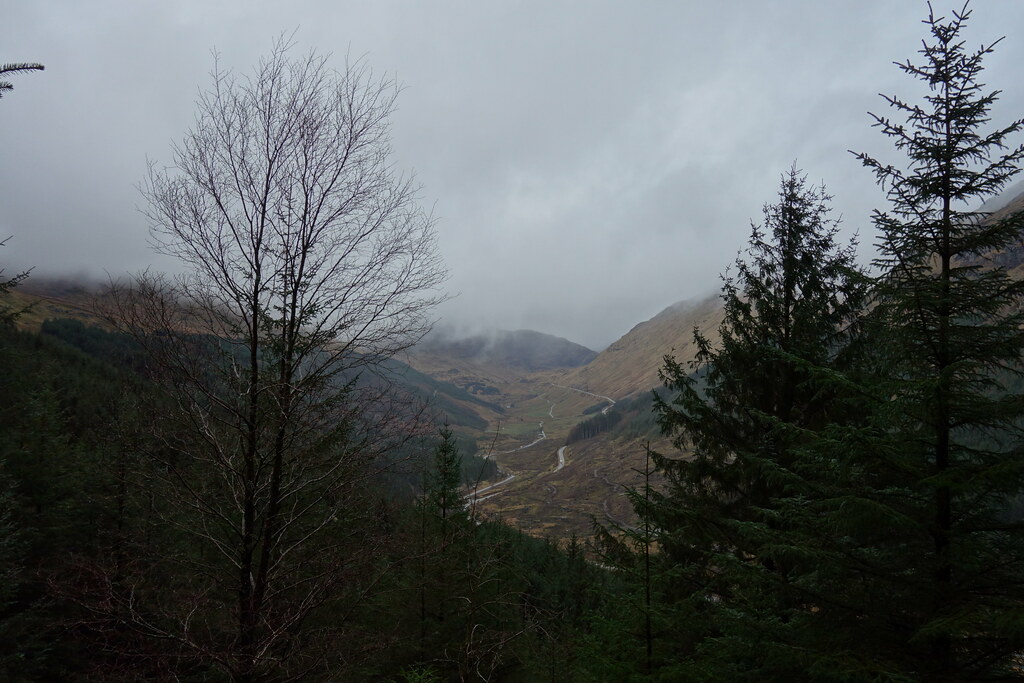 But it was not to be...soon the skies opened and I had to dive under a tree to avoid getting soaked while I put my waterproofs on. Ahh well....

it was wet and slippery and not designed for short people. After the initial struggle it was easy going despite the steepness and I was gaining height quickly. 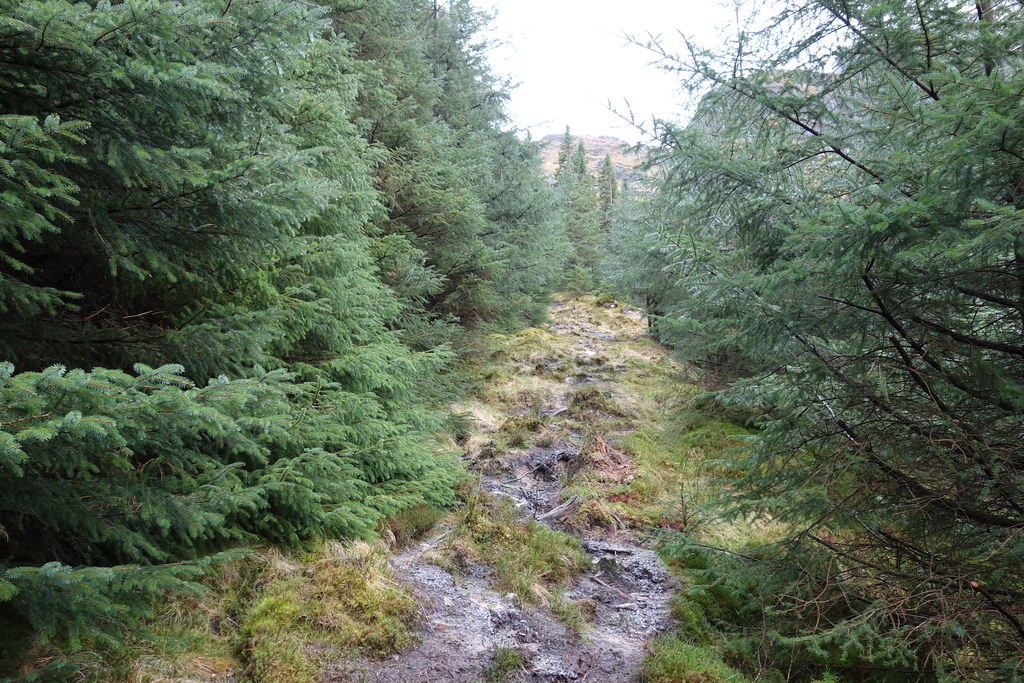 The views back the way were still good... 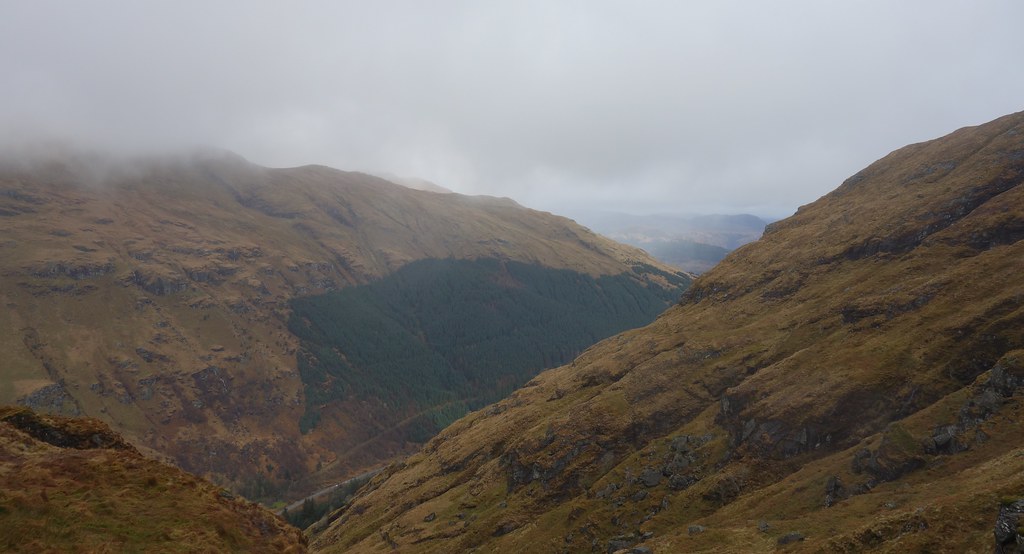 And the views ahead of creepy crags... 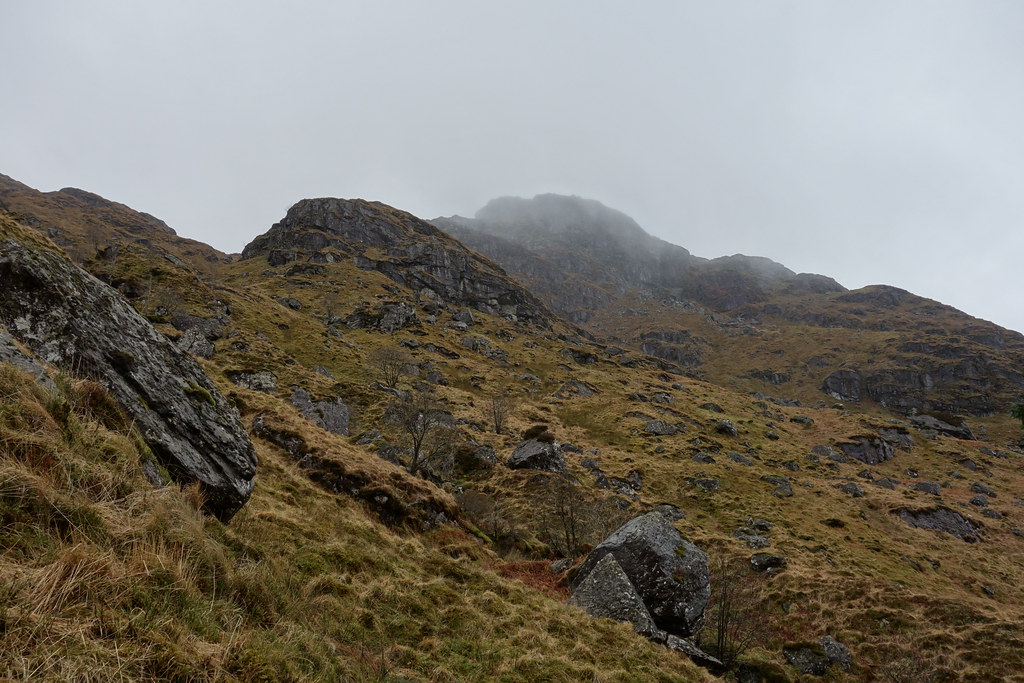 The rain was on and off but soon I was deep in clag. The path became very soggy for a while as I climbed the grassy rake up to the Lochan. Objective 1 reached! 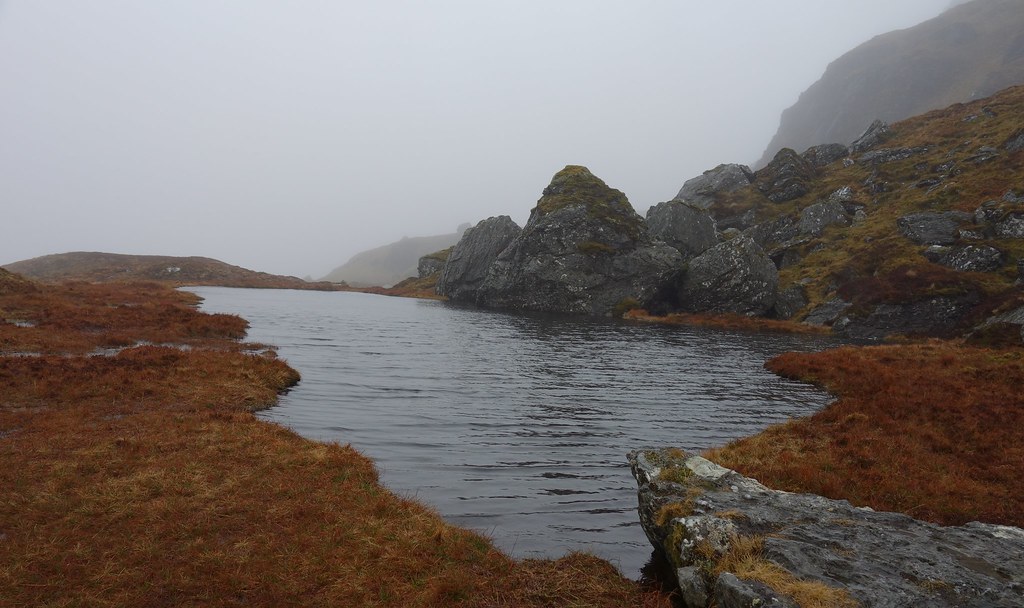 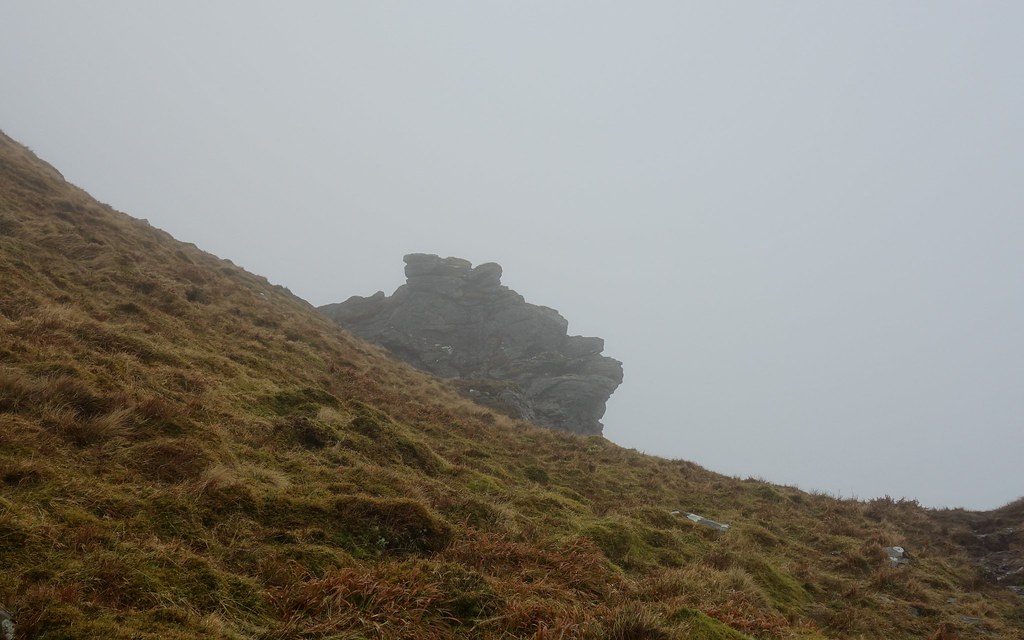 From here the path wound around the hill before climbing up in between the crags to the summit where I was hit by the full force of the wind which I'd been relatively sheltered from up until now!

Nae views of course, the wind was trying to blow my map free and the rain had chosen that moment to return. But I was still glad I'd come out! 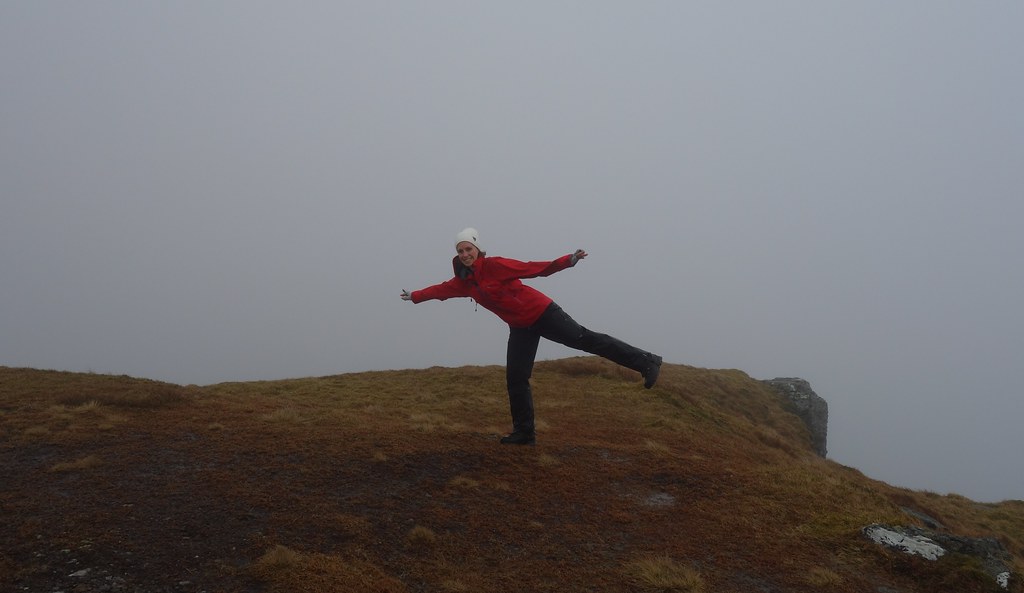 I took a bearing from the summit and headed off. It was cold and wet and I didn't bother to check the map for a while, which turned out to be a mistake as I'd started to head too far West??? Actually for once double checked with the GPS here (hardly ever use it) but I was worried about getting too far off course and running out of daylight! It confirmed my suspicions, as did a very brief semi-clearance and hazy glimpse of a road. I corrected myself, and then picked up a sort of path which led me safely around the crags and down to the bealach where I met the Cowal Way at a cairn.

The Cowal Way was a bogfest as I followed it to the right until the crest of the ridge. Here I headed up rough ground which was supposedly the shoulder of Cnoc Coinnich (if this was true it was a very funny shaped shoulder

) I kept seeing a peak looming out of the mist and it turned out to be yet another false summit. On and on, at least I was largely out of the bog now! Eventually I arrived! It was a tiny cairn on huge rocky slabs to mark the summit. I paused to admire the views.... 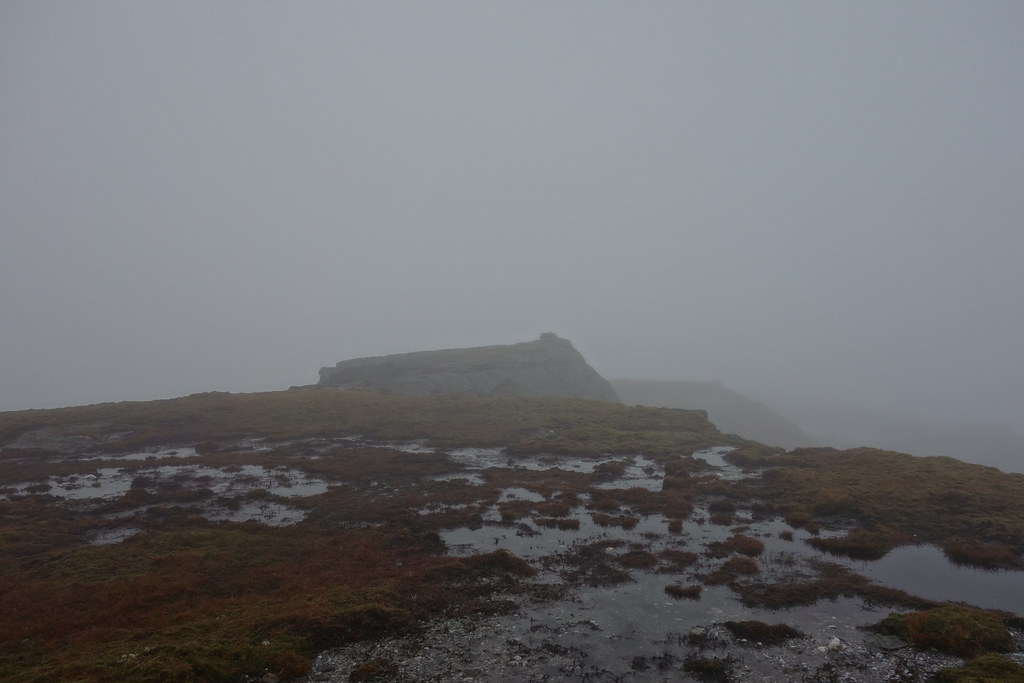 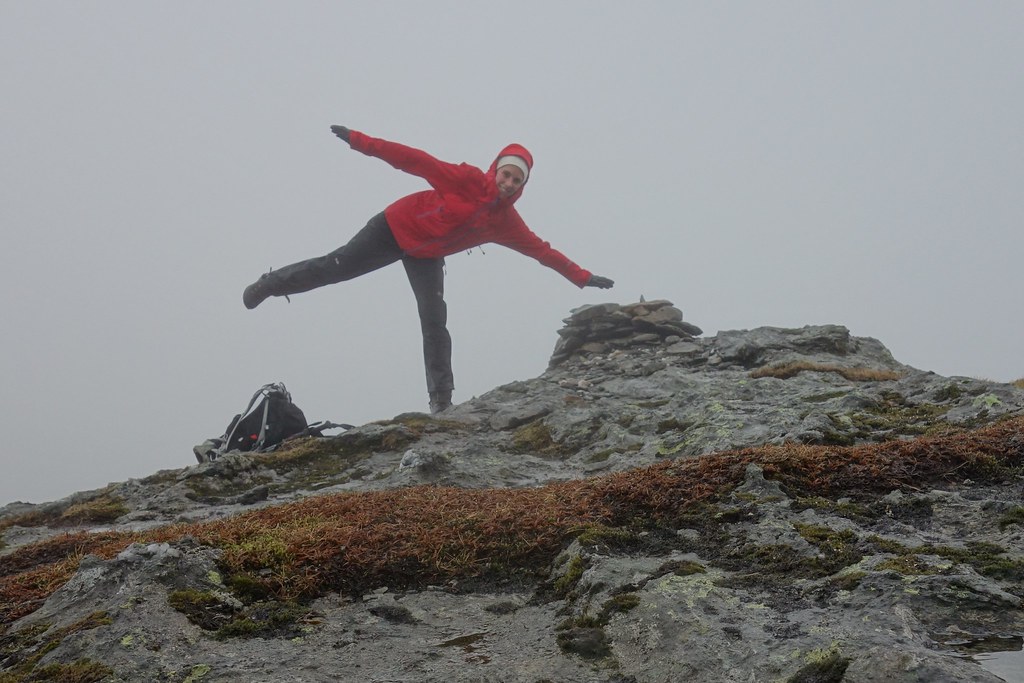 It had only taken me 3 hours to this point despite my...diversion...

but I did realise that my calculation of 1-6pm being 6 hours was incorrect...

maths was never my strong point...but i had deliberately left the long track and road walk for the end anyway

I thought these two rocks were people 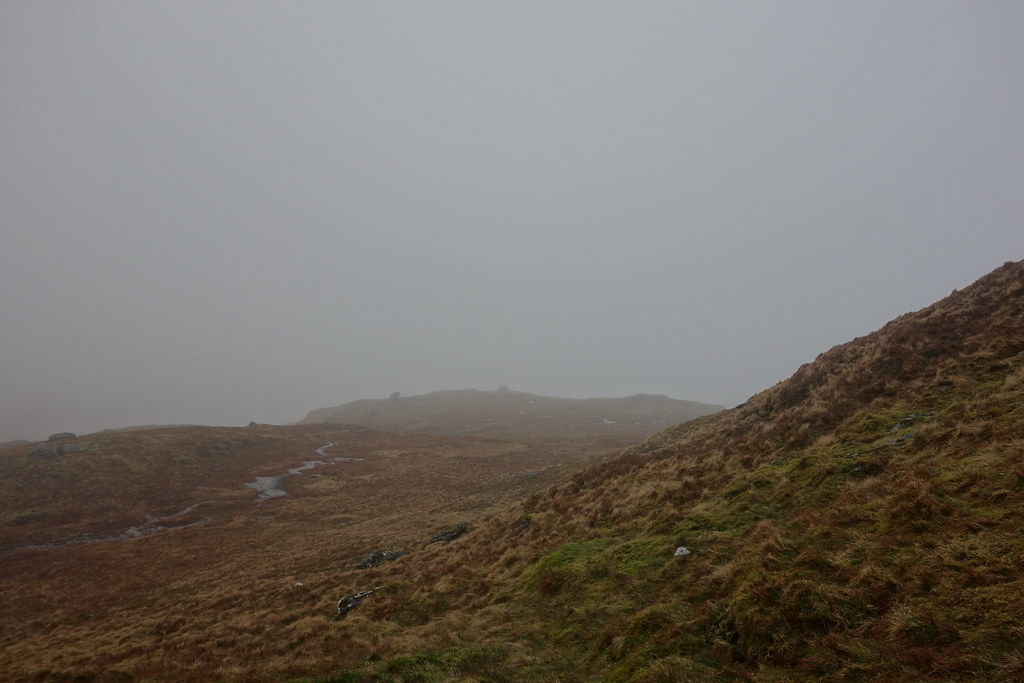 There were no views to admire and no prospect of it clearing so I headed off, back down the "shoulder" to the Cowal Bog Way and back to the cairn. 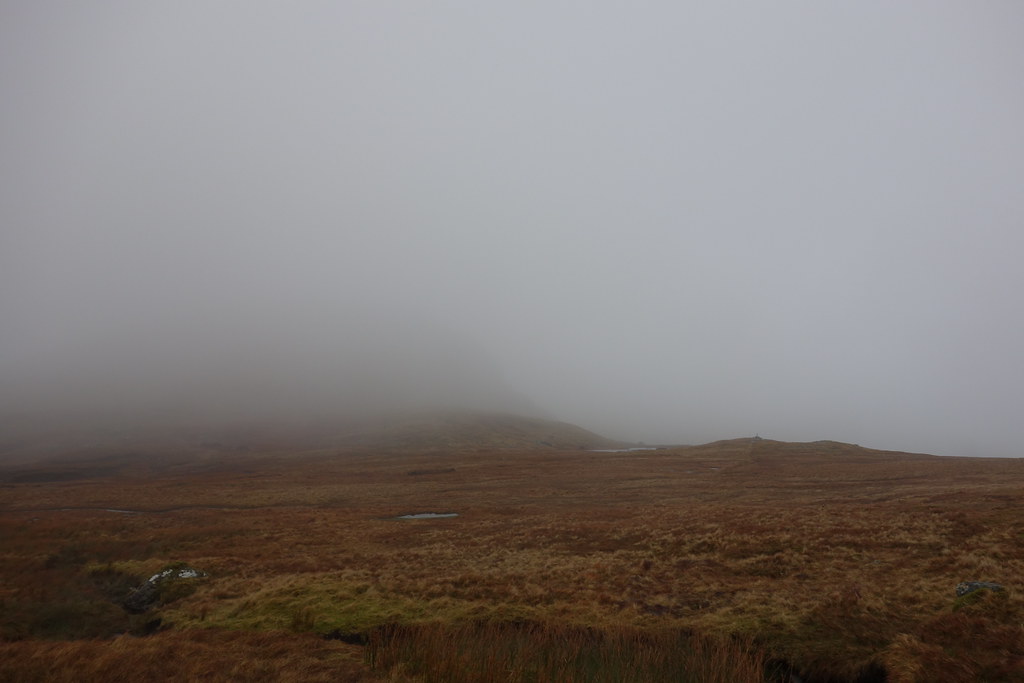 Here some views did start to open out a little and I was able to see down the valley towards Arrochar. It was nice to finally have some visibility! 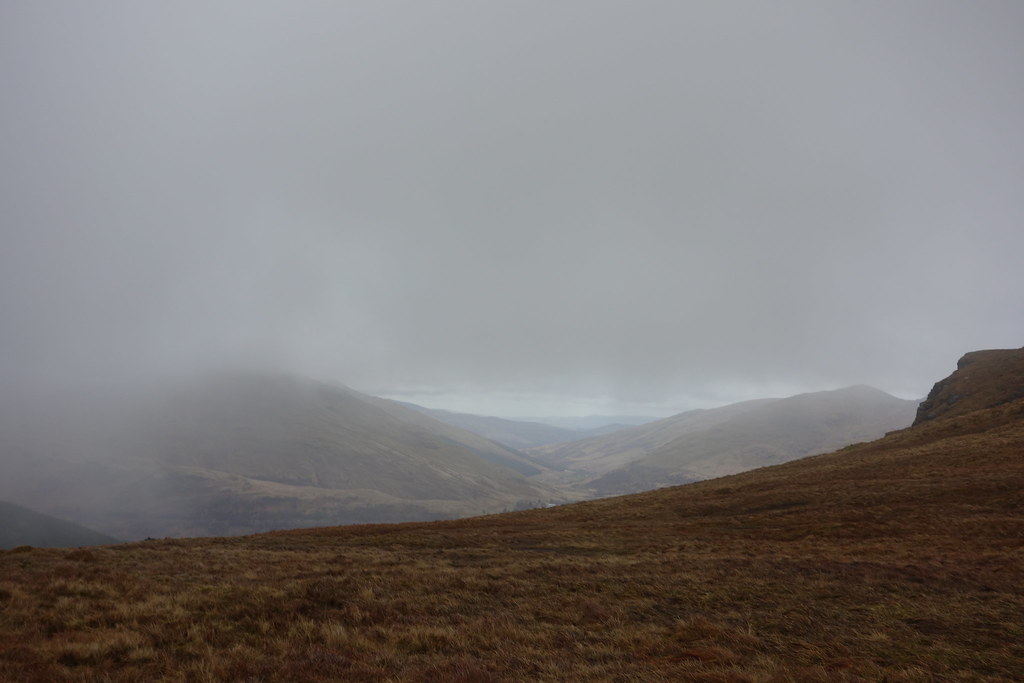 The path was wet and slippery and care was needed to avoid an accidental muddy bum slide. Mud slide averted, I reached the gate which led me down a path along the side of the forest and across a couple of bridges before reaching the track. 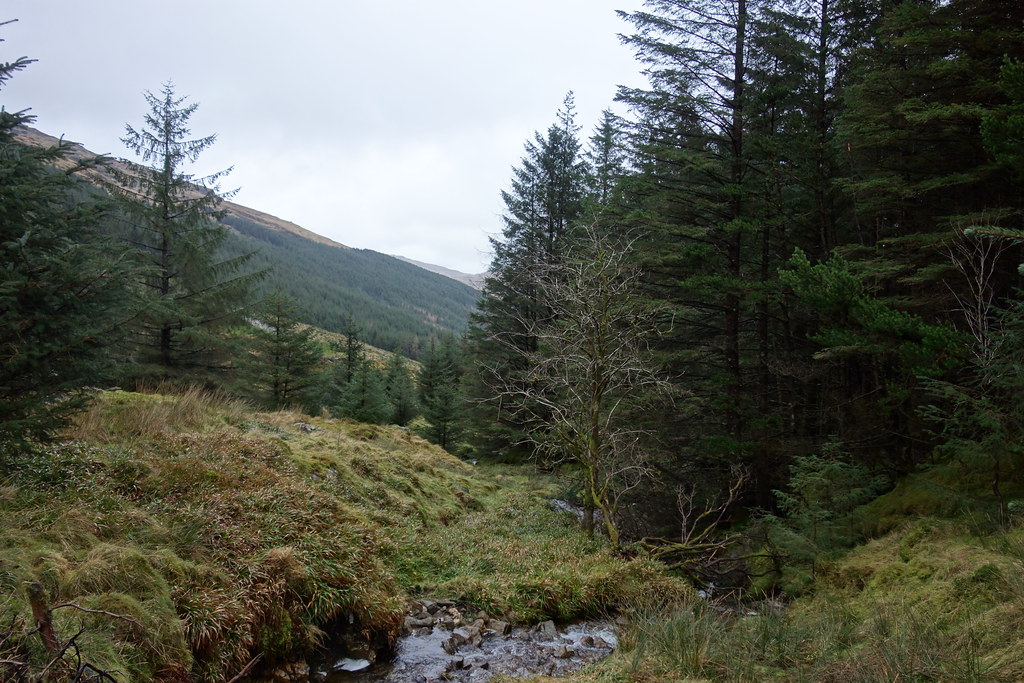 The track had been chewed up by lots of big tractor-like vehicles and this whole section turned into a bit of a trudge, but at least the rain was off (for now) and there were views.

Ahead to Luss Grahams – Doune Hill and Cruach an t-Sidhein 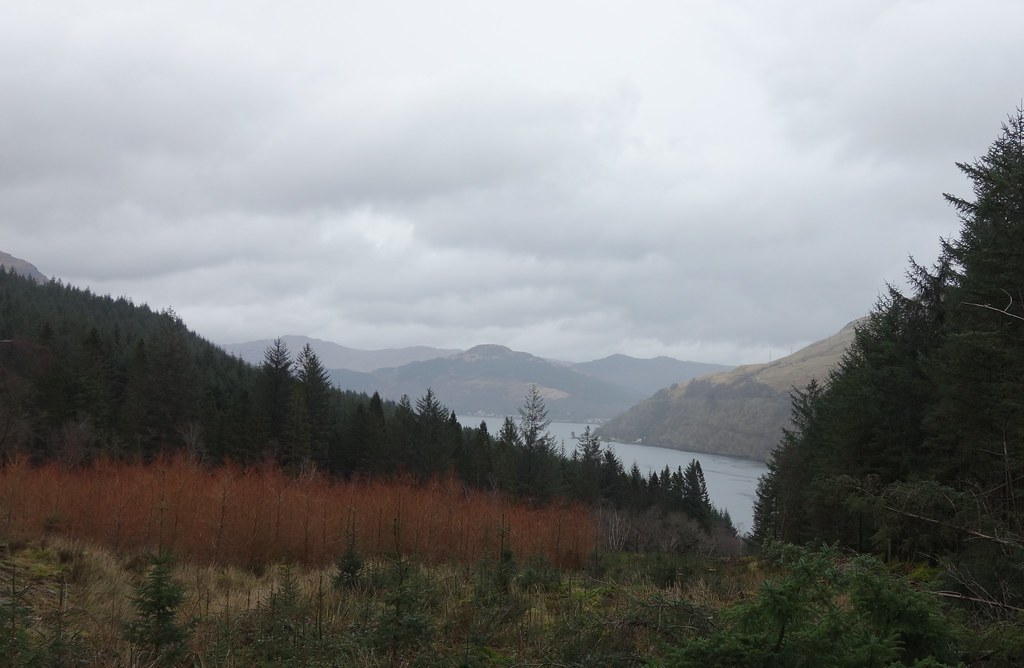 After a while, the track became a surfaced road; easier to walk on but less interesting. A water feature: 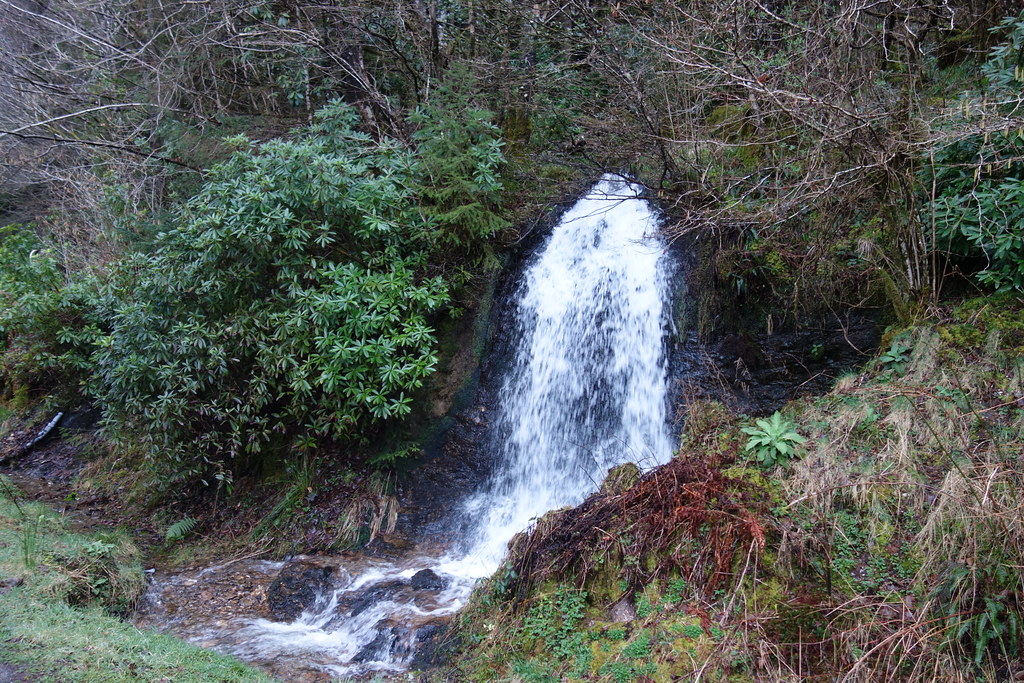 I plodded on, eventually reaching the signed Ardgarten Shore Walk, which was much more pleasant as suggested. 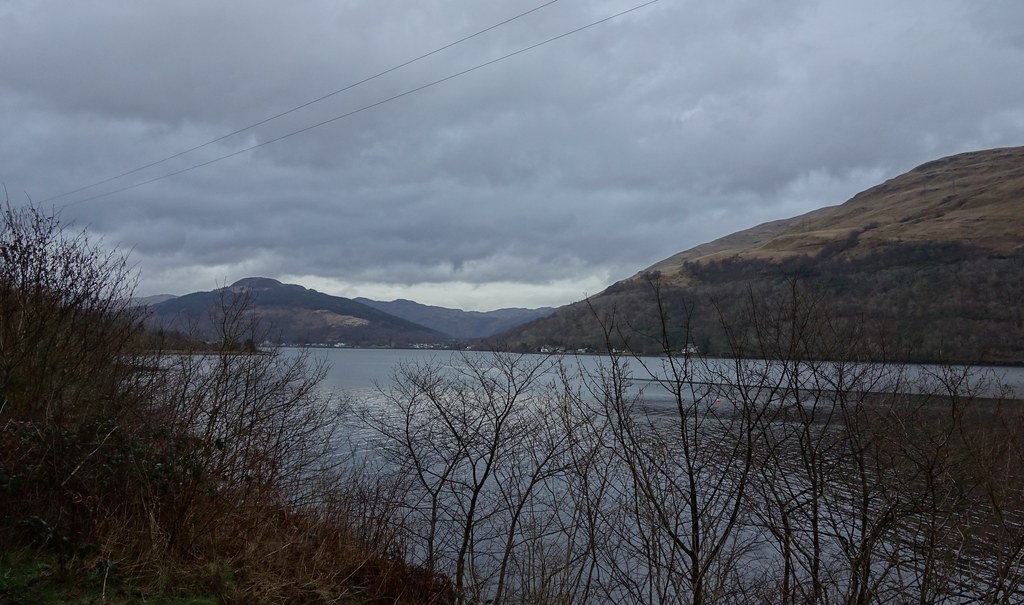 All too soon I was back on the road (at the Ardgarten Hotel) and heading back up towards the car park. There was an interesting ruin along the way... 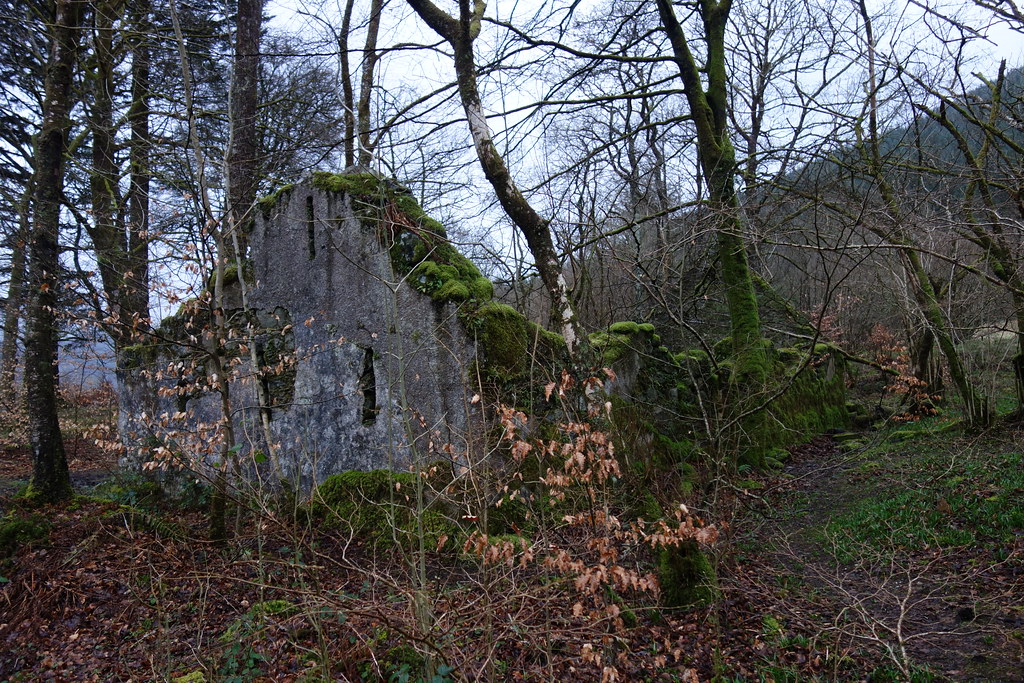 And I was back at the car. It was raining. It was a wonderful feeling getting Boots and waterproofs off and even being able to use a real toilet as the block was still open

not too bad for an invalid

As I drove home, I was able to catch up on the final day of the 6 Nations and the news that not only had Scotland thumped Italy, but also that England had been denied the Grand Slam by a spirited Irish performance

You poor Weegies seem to have missed out on the sunshine.

Up here It's suntan time.

the left leg 'Jaxter' is cool.

P.s even I knew they were stones

It was a dangerous game...good job it wasn't more windy

Andymac75 wrote:You poor Weegies seem to have missed out on the sunshine.

Up here It's suntan time.

the left leg 'Jaxter' is cool.

P.s even I knew they were stones

Luckily us poor Weegies have other things going for us, such as...err....

Those stones were creepy

That area is awesome, and so close to home