This Graham does not have its own WH route (hopefully it will have one soon), but it's much more than just "another BHL". This hill has a lot to offer, sadly we couldn't appreciate it to the full due to foul weather, but nothing is lost. It's not that far away to drive from home, so we can always return on a better day to savour the views from the summit.

It was Sunday the 12th, and a wet front was passing over northern Scotland. It was going to reach the western coast in the morning then spread to the east by midday, but Applecross and Skye should clear by 1pm. High winds and low cloud for most of the day, but as we didn't want to sit at home, a wee plan was hatched. We would go to Applecross to climb Beinn a'Chlachain. It's only a half-day hill, so we should miss most of the bad front if we started at 11-12ish.
The best way to climb this hill is a circuit described in SMC guide, ascending the steep slopes to the left of of Coire Glas and descending SW along the gentler side. We hoped to do that, but when we got there, the clag was down to what looked like 150-200m and it rained. Driving over Bealach na Ba with visibility down to 10m was a challenge in itself

and when we arrived at the starting point (a car park overlooking Applecross Bay) we were not really sure if going up the steep, slippery slopes in rain and zero visibility was a good idea. Safety first, so we decided to take the easier option and go up and down the SW side.

Track_BEINN A CHLACHAIN 12-03-17.gpx Open full screen  NB: Walkhighlands is not responsible for the accuracy of gpx files in users posts
The car park was deserted, no wonder, weather was not good enough even for beach strolls... From the Cruarg car park, we took a well-made coastal path but left it very quickly - too quickly. It was Kevin's idea

It is actually better to stay on the path for about 1km, and then turn right to tackle the slopes - it's much less steep ground, which we only discovered on the way down

So it was a steep, wet, slippery trudge for the first 100m or so of ascent, we were slow and didn't enjoy the experience at all. The only views we had were down to the beach: We knew it was going to be a day of cloud and waterproof layers, but there is always hope somewhere inside, that conditions may change...
After the initial steep stage, the slope became easier and we picked up pace. The ground was wet and slushy, our boots making squelchy sounds: glooomp... gloomp...
It was a relief to hit more rocky ground higher up:

We reached the first "set" of little lochans at about 400m. In better weather, it would be a perfect place for a break and some lurking, but no point now.

At least the rain stopped and the cloud was lifting higher and higher as we climbed through the squelchy landscape... even some promise behind us... The second "set" of lochans is at 520m, we passed well to the right of the biggest one:

Soon it was "into the clag" for good and if any hope for full summit pano existed, it was gone now...

The top has a trig point and a stone shelter built around it. A very useful structure in the strengthening wind

With Lucy on my 62th Graham: 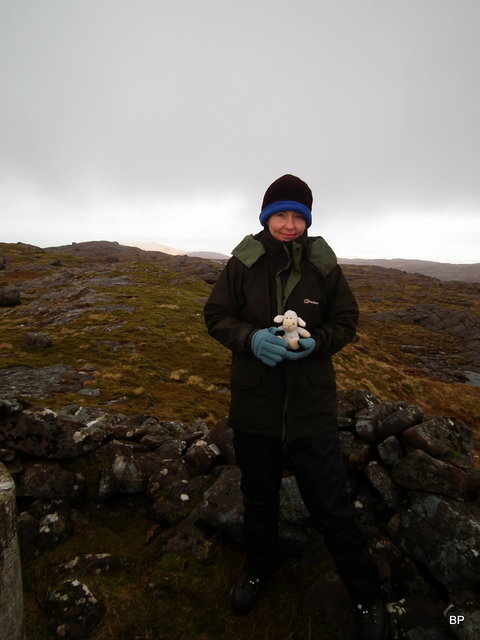 The cloud lingered just above the summit and we had glimpses of views, but nowhere near as good as we had hoped for...

View back to the sea:

Kevin, Lucy and the trig point: 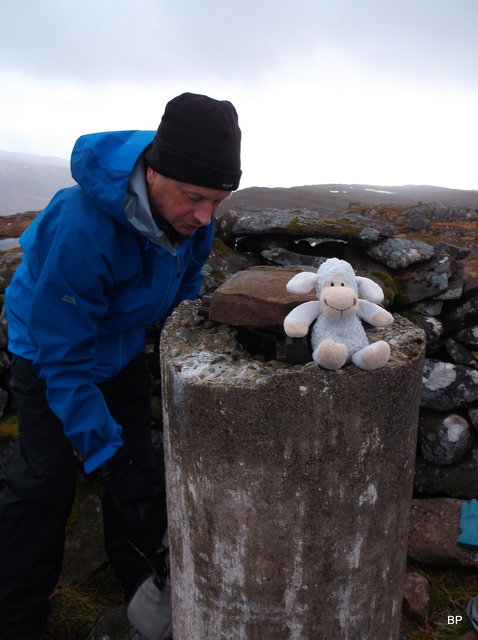 After 20 minutes of waiting for clear panoramas that never came, we decided to go down. Wind was pretty gusty now, so it was necessary to wrap up properly:

We walked to the edge of Coire Glas to take some photos from there - it's steep indeed and we were glad we didn't try to go up this side in given conditions. On a dry summer day it would be a different story though:

But as we walked down through the squelchy landscape once again, weather started showing some signs of improvement:

Sunshine! Sunshine! Far too late, but better than nothing 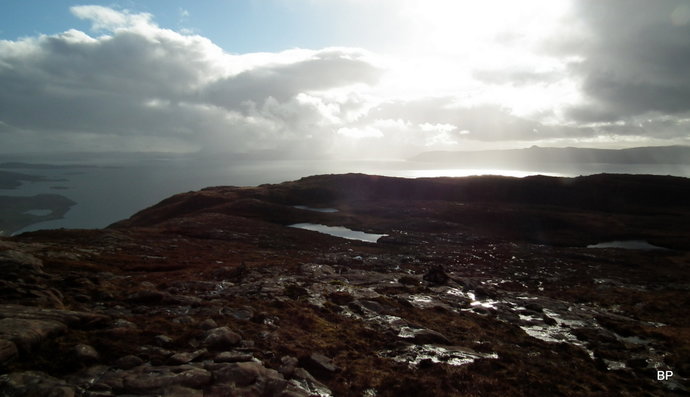 When we reached the lower group of lochans, we stopped for a few minutes to admire a double rainbow: 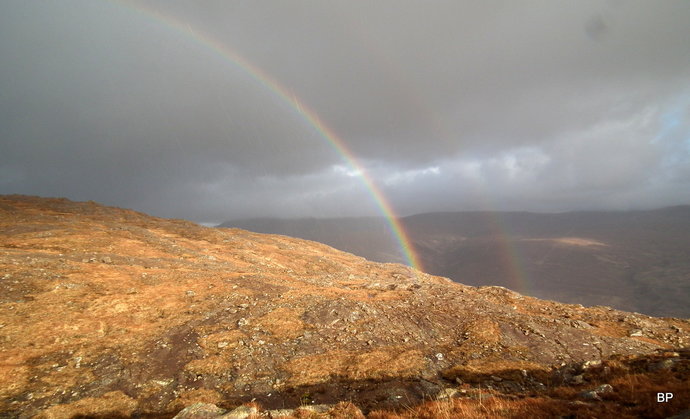 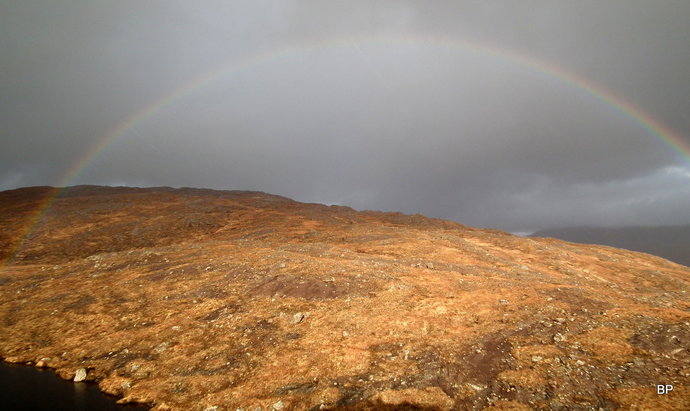 We found the viewpoint cairn at 400m (we somehow missed it on the way up, but to be honest, we didn't really look for it) and took a break for photos. By now, we were off the nasty wind and the temperature was rising - it wasn't a lost day after all!
The summit of Beinn a'Chlachain behind me: 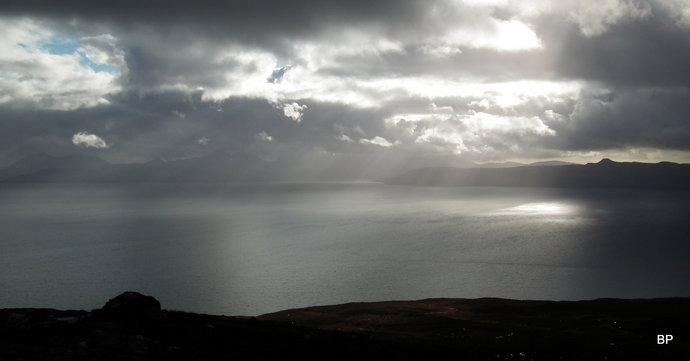 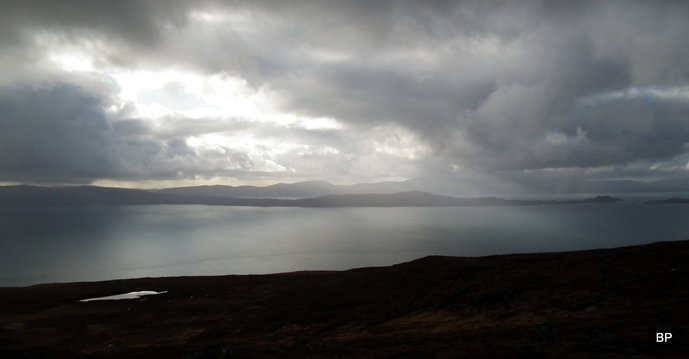 Low cloud over Bealach na Ba. Kevin said, he didn't fancy driving into that clag again, so we decided to return the other way, around the peninsula and through Torridon. It's a bit longer, but does not involve high bealach crossings

Back to the sea - amazing game of light and shadow:

Getting ready for another photo session 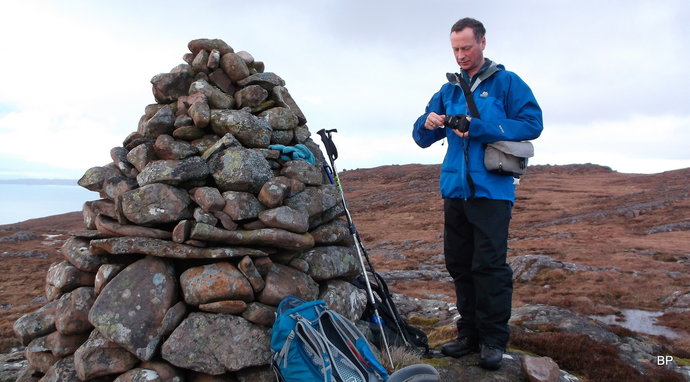 On the final descent we kept more to the right hand side as we walked down, to avoid the steep section above the car park. Indeed it was much easier going on grassy slopes and soon we located the coastal path, which took us down to the road. Another Graham in the bag!
Summing up, a half-decent day. Actually, better than the forecast. Shame we didn't get the full views, as they must be stunning, but good enough a trip for a spring outing. We will return to this hill to give it full justice - in better conditions of course!
The next day was again forecast to be windy (35-40mph) but sunny, so we went to visit another Graham: a lovely, easy walk-in on a track, some deep heather higher up, windy summit... But at least it didn't rain! TR coming soon.

The rainbow and the atmospheric views must have been a really cheery sight after the start in the rain.

I love your atmospheric pictures out to sea and across to Northern Skye.