Picked where to go on my day off by the forecast, Aberfeldy area looked nicest so I picked out this route, of course by the time it got to today the forecast sunshine was replaced by cloud but I went anyway. Setting off from the car park at around 10:30am, the dogs came across this gentleman sat on the bench... 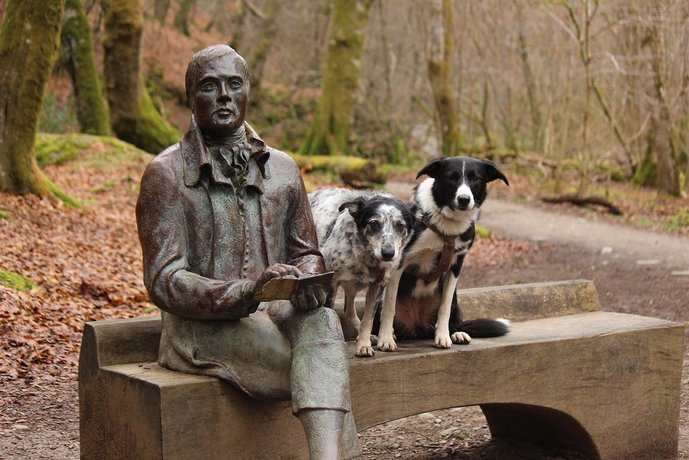 He completely ignored them! AND he didn't have any treats (Millie checked thoroughly). So we said goodbye and continued on up the Birks of Aberfeldy passing a number of waterfalls, some of which had frozen in places. 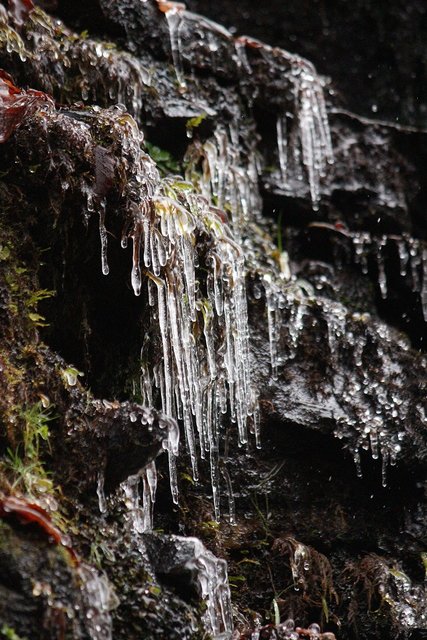 And there was this frosty log at the bottom of another waterfall... We soon left the Birks and followed the road along to the farm, where we were directed off the road onto a path around the field with sheep and horses watching us walk by. Rejoining the main track, we were now on the moorland stretch and were greeted by the sounds of lapwing, curlew, red grouse and other upland birds. 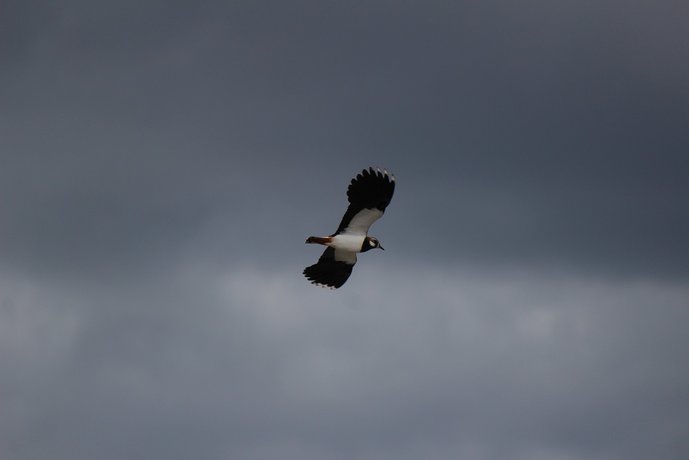 This didn't last long though, further along the track silence descended only broken by the odd grouse. It was a mostly quiet walk following the burn, which also made it an easy route to follow. And for the first time I got to use my pocket wellies when I couldn't find a good spot to cross a ford! 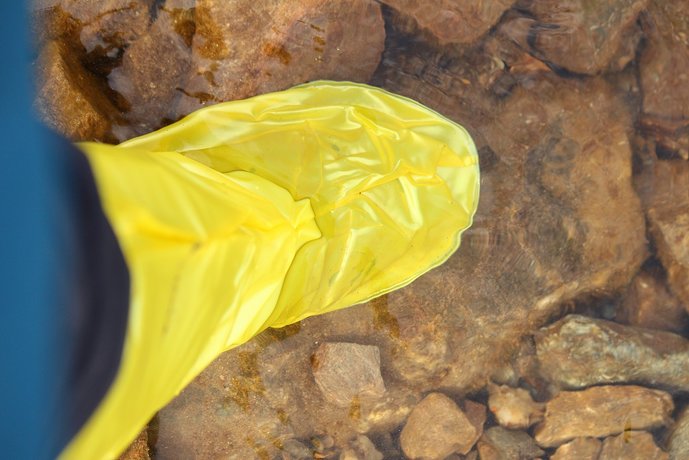 Now, I know some will probably laugh at these but I have a bit of a problem when it comes to crossing water (unless on a bridge, I like bridges!). It is just something I have a bit of a fear of, my legs turn to jelly when having to use stones to cross water, and I always try to find the easiest way to cross. But the pocket wellies slipped over my shoes and I could just walk across (as I would with normal wellies, but they aren't so good to walk in!), bit awkward to get on and off but I was much happier crossing using them. I've not done too badly though, bought them ages ago and this was the first time I've needed to use them. 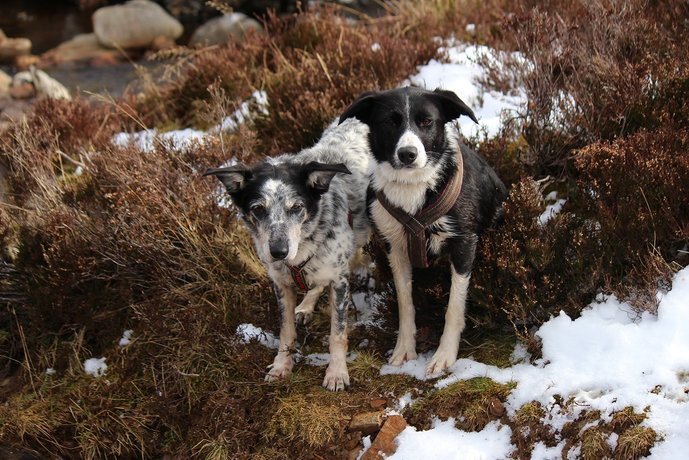 We continued following the main track, there were hills behind us but unfortunately the pylons were there too always getting in the way of photos! They certainly didn't leave any feeling of remoteness up there. Crossing under one lot of the pylons the original track has been fenced off in a large square (nothing in it) and a new track created to the right. It was only a minor change though, the fenced area is tiny! No idea what it is for.

The track led away from the pylons and they were no longer in view ahead of us. Though they were always there, lurking somewhere...usually in front of the distant mountains! The trail led away from the burn, I glimpsed a car on the road that the track would come out onto but even then I was still surprised when we went round a corner and there was the lochan (and the green hut). From here it was goodbye to the moors and their grouse, and hello to the road downhill... On the way down I glimpsed what I'm sure was an owl just at the edge of bit of woodland. Of course, by the time I got there it was long gone so couldn't confirm what it was. The road leads down to a house where there is now a signpost directing walkers along the route to Aberfeldy. Most of the way is waymarked/signed from this point on including at forks in the forest so working out the right track was no problem.

After walking through some fields of sheep, we reached the forest and the dogs could get a bit of a run around along the very muddy trail... And find some exciting new things to play with! (I did make her put it back where it was!) Most of the sections were separated by gates, but there was one bit where we had to cross a stile. This posed a bit of a problem as while Moss jumped it no problem, Millie couldn't manage the jump (she is 13 this year!) and the platform bit was too high for me to lift her onto easily. Fortunately I managed to pull the gate apart enough that she could slip through. Something to be aware of if taking a dog on this route. The forest left behind, the views opened up again (though often with the pylons in the way!). Kenmore could be seen at the head of the loch, and what I'm guessing in the Lawers range behind? And more snowy landscapes with a tree... There was another problem if walking with a dog, a cattle grid with no gate to the side to avoid it just before a cottage. I had to carry Millie across, not great when she was covered in mud. I tried to get Moss to jump the fence at the side, which should have been no problem but she had other ideas and went across the cattle grid somehow using the tiny bit of concrete at the edge! At long last, Aberfeldy came into view below and the track forked, with a sign directing down to Aberfeldy and another to the Birks. I was tempted to just head straight down, but we stayed on route and headed back to the Birks, where that guy was still sat reading on the bench... Re: Aberfeldy and Kenmore Hill walk

KatTai wrote:He completely ignored them! AND he didn't have any treats (Millie checked thoroughly).

I always enjoy reading your reports and seeing your superb photo's of those lovely Collie's, my favourite dog breed. Your pics are always top notch, can I ask what camera you use?

Yes that is Ben Lawers and co. behind Kenmore, not sure what mountains you saw behind the pylons though, depends on what direction you were facing... i'm guessing the Glen Lyon Munros?

I have a friend in Pitlochry who refers to Aberfeldy as "Abershelbyville" with Pitlochry obviously being Springfield!

Re: Aberfeldy and Kenmore Hill walk

KatTai wrote:He completely ignored them! AND he didn't have any treats (Millie checked thoroughly).

I always enjoy reading your reports and seeing your superb photo's of those lovely Collie's, my favourite dog breed. Your pics are always top notch, can I ask what camera you use?

Yes that is Ben Lawers and co. behind Kenmore, not sure what mountains you saw behind the pylons though, depends on what direction you were facing... i'm guessing the Glen Lyon Munros?

I have a friend in Pitlochry who refers to Aberfeldy as "Abershelbyville" with Pitlochry obviously being Springfield!

The dogs had great fun, that distance is getting a bit much for Millie now though! Suspect it will be me and Moss for much of the time now...until the neighbours puppy is old enough to offer her some company lol

Could be Glen Lyon, think it fits with the direction. I just think "pretty snowy hills" most of the time! I think I spotted Ben Vrackie...not sure though as it didn't look like it had snow on it so maybe it was something else as I'm guessing there should be snow up there.