Misfiring with the Dutch on Ben More and Stob Binnein

Misfiring with the Dutch on Ben More and Stob Binnein


This is one from the summer holidays of 2009. Turned out to be an "interesting" day in the hills.

I had originally intended to do the ascent route as described in the Ralph Storrar book "100 Best Routes on Scottish Mountains" but got hopelessly and somewhat inexplicably lost in a maze of forestry, felled trees, streams and tracks. I couldn't seem to make head nor tail of what was going on and just ended up getting more and more frustrated and irate. Things came to a head when I tried to cross a river and Lucy decided to take a running jump at the rock I was occupying. Result - I ended up in the drink with a badly cut and bruised elbow and ended up retreating back to the car with my tail firmly between my legs and a good hour and a half of my life up in smoke.

I decided that there was no other option but to drive further along the road to Benmore Farm and undertake the ascent on the traditional, notoriously steep and tedious route. During the short drive, large dollops of rain began to splatter the windscreen and I seriously considered jacking it in for the day. Maybe I would have done if I hadn't been so determined to salvage something from the day after the false start. At the gate just beyond the farm (which must have been padlocked I guess although I cannot actually remember exactly) I was manhandling Lucy over it as a Dutch couple and their two kids descending the track reached it and made some comment about this in that particular cheery and jocular Dutch way, a trait that is often quite endearing but following my dunking in the river and various other misadventures today, it was far from endearing and the poor family ended up copping a dose of hill rage. If that particular Dutch family ever happen to read this, I apologise profoundly for my ill manners. There is no excuse for hill rage - ever!

The views were some reward for the brutal ascent in the muggy conditions. At the summit trig point I met another two Dutch blokes sitting having lunch. Still quietly fuming and recalling my earlier outburst, I bade them as cheery a hello as I could muster (although having reached the summit and being rewarded by the extensive views my mood had lightened a little) and moved a safe distance away before settling down for my own lunch. Must have been Dutch Day on Ben More or something!

From there it was a relatively uneventful descent into the deep trough of the intervening bealach followed by another steep, relentless climb upon to the second Munro summit. The dark clouds were massing angrily by this stage so I didn't hang about too long before descending back down to the bealach and heading down grassy and boggy slopes by the side of the stream into the glen below. Once in the glen, it was an unremittingly squelchy walk back along to the start of the track near the ruined bridge, marred in particular when I went tits up into the bog from hell.

I was very glad to get back to the car but there was one further sting in the tail yet. As I removed my waterproof over-trousers, I noticed a small tear in the arse area. Upon closer inspection, I noticed that the actual tear was semicircular in shape, and the outline of the whole circle could clearly be seen upon the material of the trousers. I mused for several minutes as to what could have caused this before finally twigging - the cargo pants I had been wearing underneath had a rear pocket, the flap of which had been stuck upwards, revealing the little circular metal clip button which had obviously managed at some point to dig into the waterproofs and tear through them. I was fairly hacked off by this further incident of misfortune but hindsight is a wonderful thing - they were the self-same pair of waterproofs which were shredded some 8 months later in a freak crampon-related accident on Bynack More on a day which made this one seem like an afternoon on a sundrenched beach in St Lucia! To Loch Tay from summit of Ben More Crianlarich and the Tyndrum hills beyond (Lucy's bum in foreground) 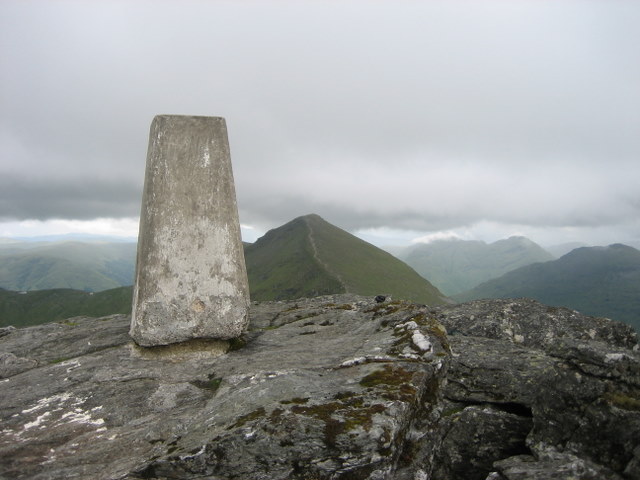 Ben More trig and Stob Binnein in the background 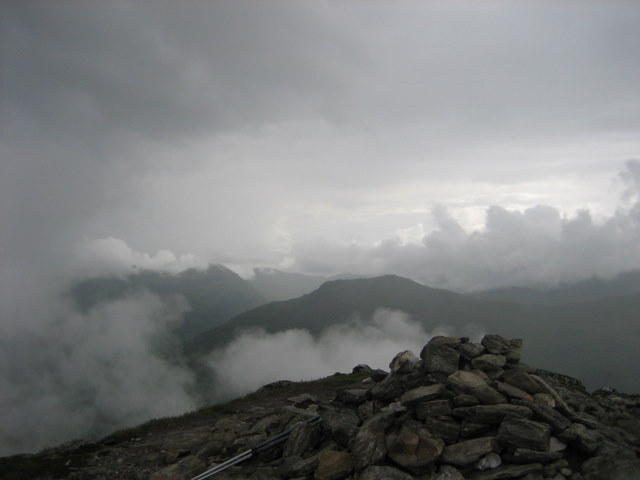 Dark clouds gather above the hills to the south 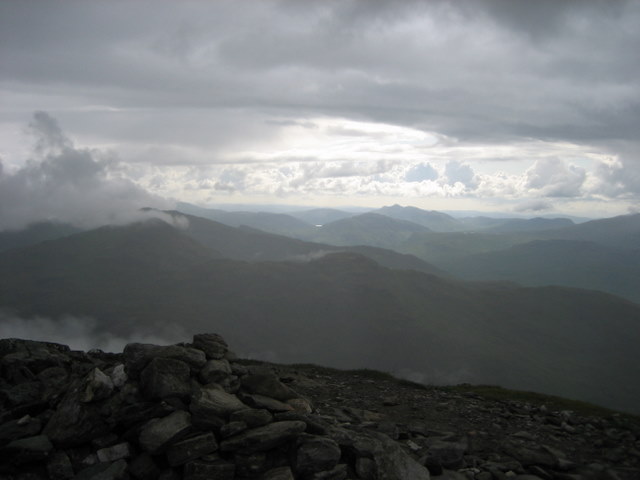 A chink of light out west 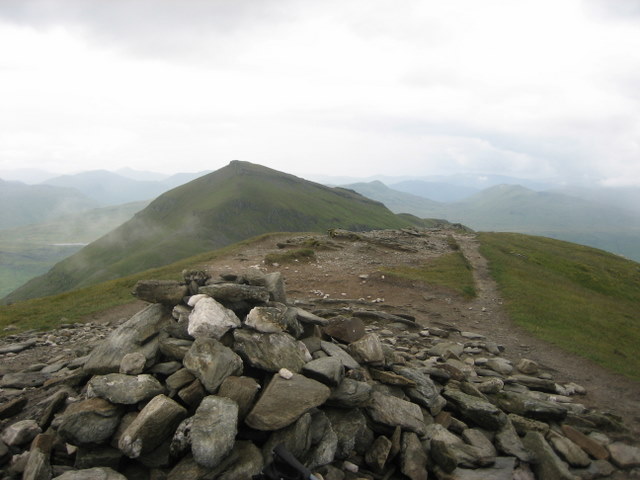 Sounds like you had a lot to contend with on this walk! These things happen to everyone though. At least you made it to the top of the two summits and got a view!

Nice pictures, and those dark clouds do not look friendly at all.

vindaloo the night before ?

Interesting to compare one's own experiences to others... I did this a couple months ago on a scorcher with great views and even the "boggy" glen was dry. I guess that's the "beauty" of walking in Scotland - no two days are the same.