Somewhat less than hill fit having been nowhere near a hill for 6 weeks so needed something not too taxing. The Moorfoots fitted the bill. Met office was warning of the risk of sunburn – taking suncream would probably only tempt fate so left it behind – turned out that it could have been useful.

Parked in the parking space just before the “no parking beyond this point” sign at the side of Gladhouse Reservoir. Walked along the road SE through Moorfoot then along the track which heads south by the River South Esk.

Rather than head uphill, followed the track until it split – turned east and started more steeply uphill

On nearing the fence, turned towards the south for the walk to Blackhope Scar. Ground conditions weren’t the best – heather and grass tufts, soft snow which was deep at times and a bit boggy as well. 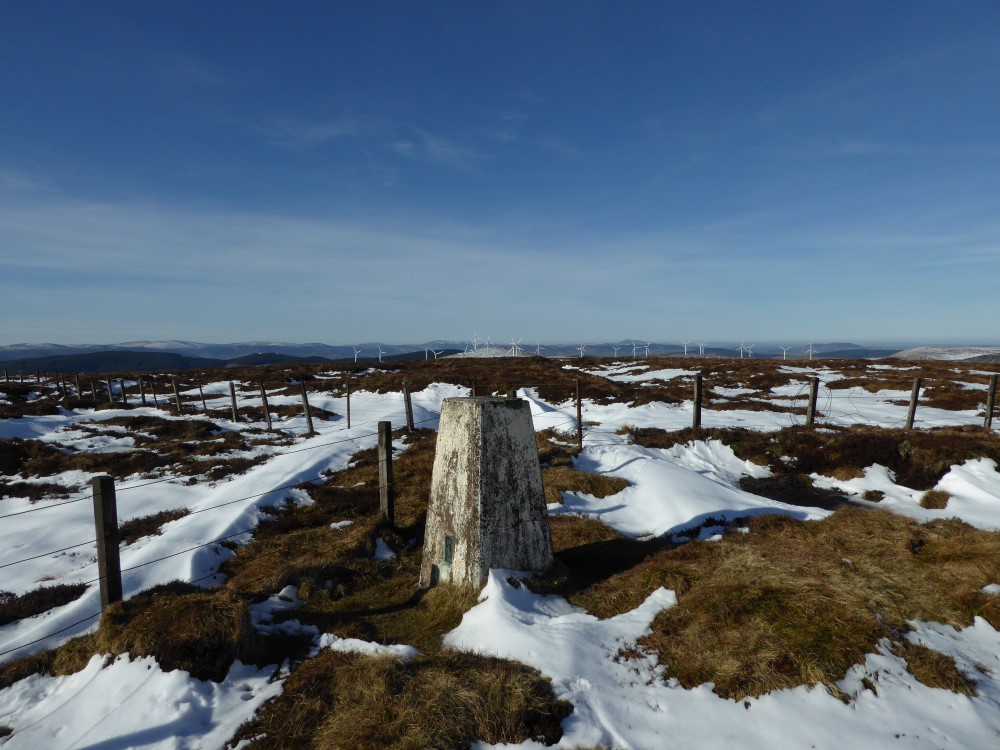 Next up was Bowbeat Hill. Off towards the SW. This was one of the toughest sections of the day – ground conditions got even worse which made for quite slow going. Still it was a nice day so no complaints.

Got to the start of the windfarm then wandered along the track through the turbines.

Was under one of the turbines when it suddenly made a different noise. Had me worried for a bit until realising that it was slowing down to stop. Hadn’t known before that the tips of the blades extend out then turn through 90o when the blades stop then they go back in turn afterwards.

Summit of Bowbeat Hill – couldn’t find a cairn though

Then the walk north and back down to the reservoir

Back at the car a little after midday – too early to head home so drove up to Gorebridge then down the B7007 towards Innerleithen. Stopped and parked in a wee off road spot NT342436 south of Blackhopebyre farm.

Crossed the road then steeply up to join the Glentress Rig track which would take me most of the way over Wallet Knowe and up Windlestraw Law.

Weather station possibly, not far from the top

Getting quite warm now – was already down to just a baselayer. Back down the ascent route. Met a couple of walkers on their way up. View towards the last hill of the day.

Crossed the road then headed straight towards what looked like a bridge on the 1:25,000. Turned out to be three logs which, when tested, didn’t seem overly secure or able to bear weight.

Wandered upstream a short distance and managed jump over the water using a stick as fulcrum – fine as I was higher up than the other bank but it wouldn’t be an option on the return.

More or less straight up – steep going especially on reaching the longer, tussocky heather sections but didn’t take too long.

Cloud and heather being burned over towards Windlestraw Law

Extreme zoom on the heather being burned

Then just a case of heading back down the same way

Boots and socks off, flipflops on to cross Glentress Water – walked the short distance back to the car in flipflops.

Your "not too taxing" would probably kills me off. Nice zoom shots. I think it's good to take a few zooms as the eyeball is often picking up on some minute detail on the horizon that will never show up on photos otherwise, though I suppose there is always the option of cropping. Anyway, more people should zoom more.

Aye, your stats say that in your day you did almost as much as we did the whole weekend

So much for an easy wander

Looks like that weather station is obtaining data for another possible windfarm .....

Another good report RH, enjoyed that and I would hardly call that an easy day.
It was a cracking weekend for being out, love the zoomed shots - your camera must be much better than mine

Just a little 28k to break you in eh

Fife Flyer wrote:the zoomed shots - your camera must be much better than mine

Big wide spaces down here - probably need to zoom more. First time today trying out a new camera but still sticking to a digital compact although this time it's a Panasonic rather than the previous Fuji

Essan wrote:Looks like that weather station is obtaining data for another possible windfarm .....

Hadn't thought of that but you could be right - cheers

My less than hirsute head is testament to the temperatures Scotland basked in last week haha. Interesting wander that RH