Just before Christmas I tore the cartilage in my knee whilst running with MT & Polly. I endured fluid build-up and an inflamed kneecap. For the last 12 weeks I’ve been doing an hour of physiotherapy daily, incorporating different exercises as I progressed. I was banned from hillwalking and running!

Five weeks into physiotherapy I was allowed to participate in spin classes, so I was doing 5 per week. Two weeks ago I got the go ahead to walk those hills

. I started slowly doing Ben An, followed by a pathless Graham from Glen Fruin, and then the Corbett Ben Venue…all seemed well.

When half way through 16 days A/L my plan was to drive to Assynt early Saturday, following seeing Goldfrapp the Friday evening as part of BBC Radio 6 Music Festival. The plan for Assynt crumbled on the Wednesday as my little old car finally went to the car park in the sky.

With no transport, and no one available for a lift due to Mother’s Day, I quickly looked what was available via public transport. Destination Isle of Arran

. Sunday morning I left Finniestion and walked to Central Station. Train>Ferry>Bus> and I was ready to start my assault on 3 Corbett’s from North Glen Sannox

The Start – Heading West alongside the North Sannox Burn, the Sun beating down on me and not a soul in sight 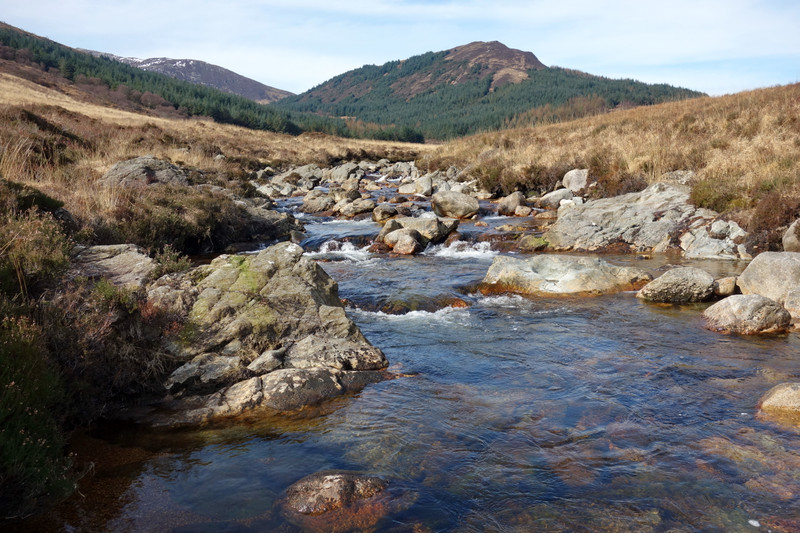 With Caisteal Abhail soon in view I was quickly on the ridge, another 3K to the summit. It was warmer than the “feels like 3 deg” predicted by the Metoffice, but I wasn’t complaining at all

The views over to Caisteal Abhail and its ridge looked magnificent, and I knew it was to get better! Time for some Dooter Posing 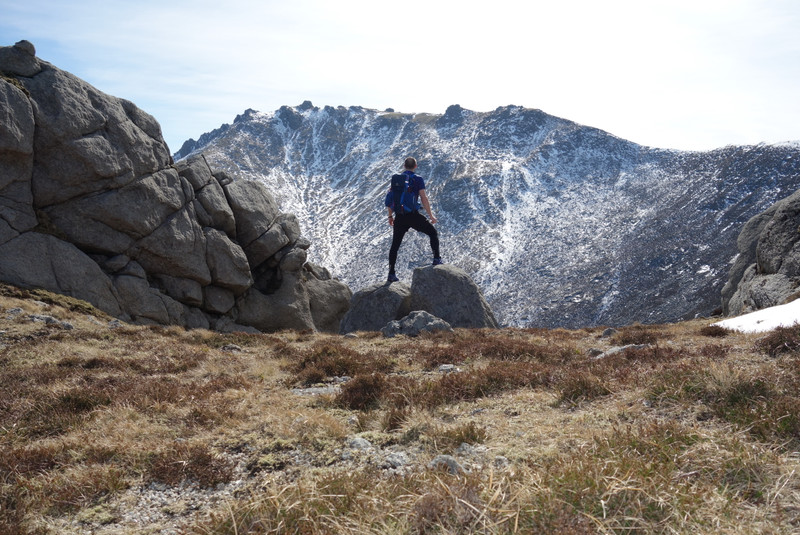 The ridge and CA.

I reached the Summit in two hours. My plan was now to find a nice spot, have lunch and take in the breathtakingly tremendous views , observing what lay ahead for me. I was apprehensive as I had never descended the very steep South face of Cir Mhor, this wasn’t helped later when chatting with a fellow walker…

The Arran Corbetts – what a view!! Cir Mhor (centre) my next target with Goatfell (left) afterwards.

After a long layoff I was overjoyed and super exhilarated to be up high in the mountains again, it just feels utterly awesome. I was also loving the solitude, I felt like the only person on this range

I reminisced about the last time on these mountains when I did a summit camp back in August 2016. I had the car then, which was roadworthy, and took the ferry from Lochranza to Tarbet. I would cycle around Tayvallich and Lochgilphead. Great days, even though I came of my bike and ended up in A & E with concussion and subsequent headaches for 3 months…ah the joys of outdoor pursuits 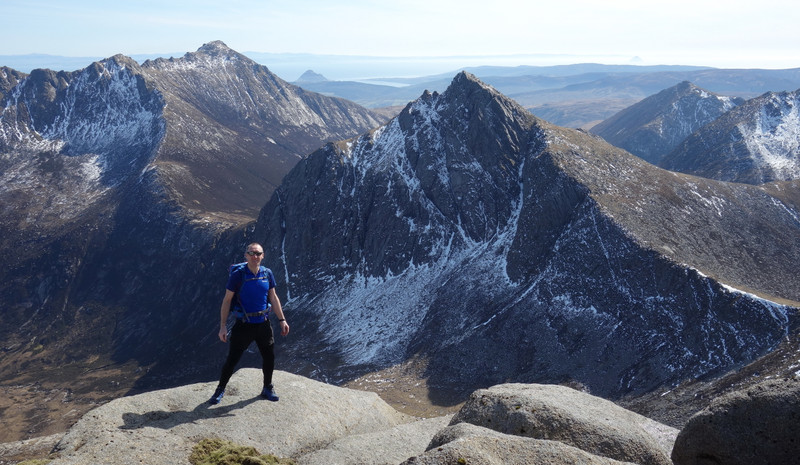 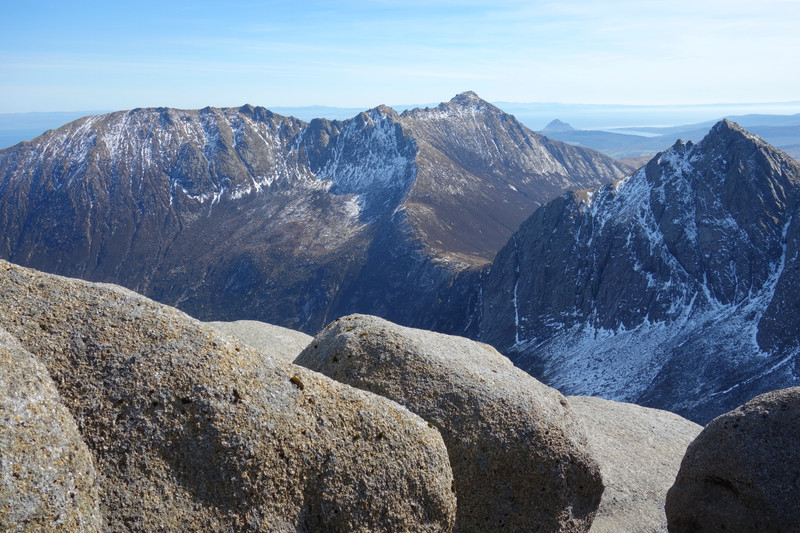 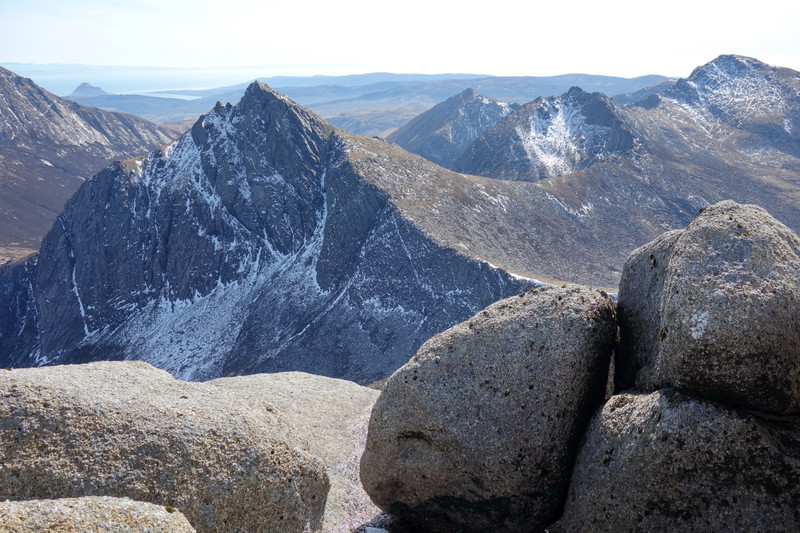 The commanding thrust of Cir Mhor and its tiny peaked Summit. 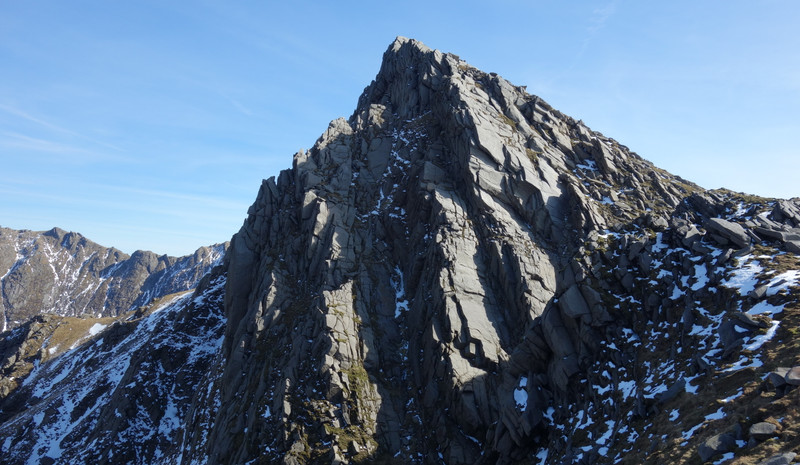 Whilst on route to Cir Mhor I went over on my ankle – ouch!! I sat for 5 minutes till the pain subsided slightly and was on my way again. Wearing new trail runners wasn’t helping either as I had already tended to the back of my ankles with plasters and compeed…but it was too nice a day to worry about pain!!

Remember that fellow walker I mentioned…. I got chatting with him whilst he was descending Cir Mhor’s SW ridge, just as I was ascending it. I queried the Southerly descent of CM. He informed me he went down a little way but basically sh#t himself! Further explaining that at one point you had to lower your body down some rocks and then jump onto a large slab at a steep angle. He wasn’t doing it so headed back up.” I’ll have a look” I quipped, now filled with fear!!

I soon reached the summit of Cir Mhor. Took a quick photo looking at the ridge leading up to Goatfell. From here you can’t see the steep descent off CM I started tentatively down the strewn boulders, always looking at possibilities of routes. There was indeed a very tricky move which I just managed, at the expense of grazed shins and arms. With all these little ailments I was feeling like John Rambo

Above me I heard a shout! Some Australian fell runner asking what it was like down there, not down under

. I gave him the thumbs up. He joined me and we chatted a bit before he scrambled quickly down the steep face.

Eventually I reached the bealach and started heading up the ridge to Goatfell, now mindful of catching the last ferry at 19.20 hours. I was now starting to feel less energetic but I was loving the challenge, it reminded me of how I felt cycling up the Sa Calobra in searing heat – hard work but perversely enjoyable

A quick look around to CM – did I really just descend that!! 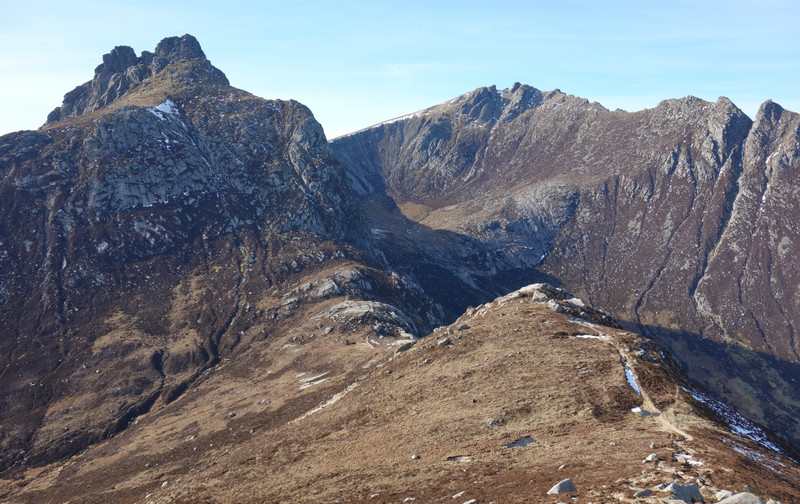 Some patches of snow still lay around so I ate what looked appetizing, this refreshed me for the final push to the top of the ridge.

Views back to CM from the ridge. 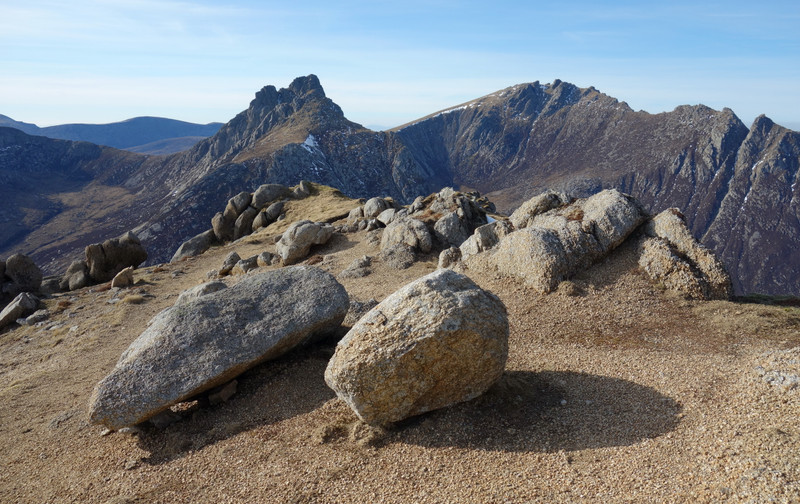 I now only had the scramble over the pinnacles to reach the summit of Goatfell. I really enjoyed this scramble, although at some points I thought there was no way down. However, a roving eye helped the cause.

Views from the summit of Goatfell. 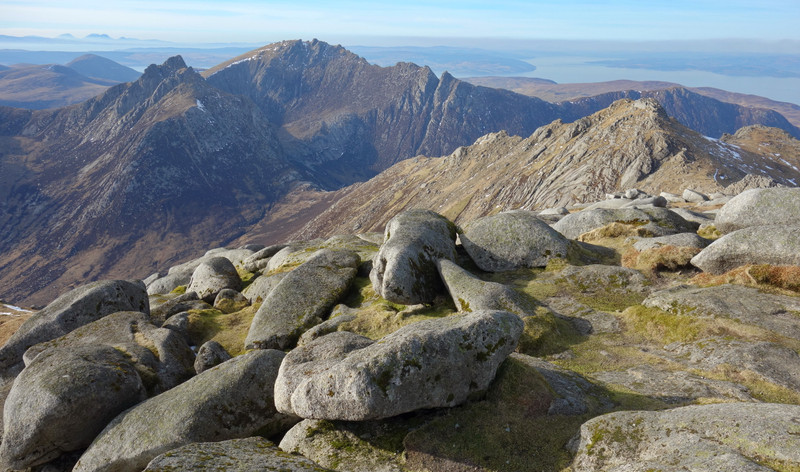 Three were only two people on the Summit of Goatfell, a bloke from Irvine and his girlfriend who was from Eastern Europe. We chatted a while, milking the views, before we all left the summit at 17.00 hours. Shouldn’t be any bother for catching that last ferry…

The walk out was really nice, escaping the jagged and smooth rocks of Goatfell for a barren landscape looking South. My legs and arms were stinging, my feet felt like I was wearing a pair of Herman Munster’s four season boots with crampons attached! But I was loving it

It was around 19.00 hours when I hit the coastal path back to Brodick which cuts through the golf course. This provided a nice backdrop out to the sea and looking back to Goatfell. With just five minutes to spare I made it onto the ferry – phew! I guzzled down two bottles of Lucozade and got a nice seat up on deck, hoping for a nice sunset. Joining me was fellow Walkhighlander Tommy Lavelle whom I had chatted with on the way over.

What materialized was one of the most amazing sunset’s I have ever seen!! Initially it was only Tommy and I taking this in but soon it felt like the whole ferry had stampeded its way to the upper deck

. I’ll let the photos and video do the talking….

Me spoiling the view, and holding up the Goatfell Range, that Lucozade is way better than I imagined 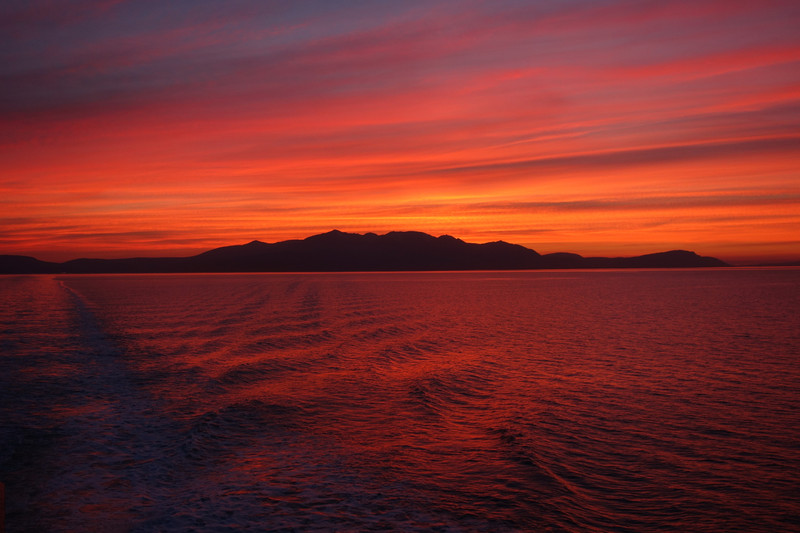 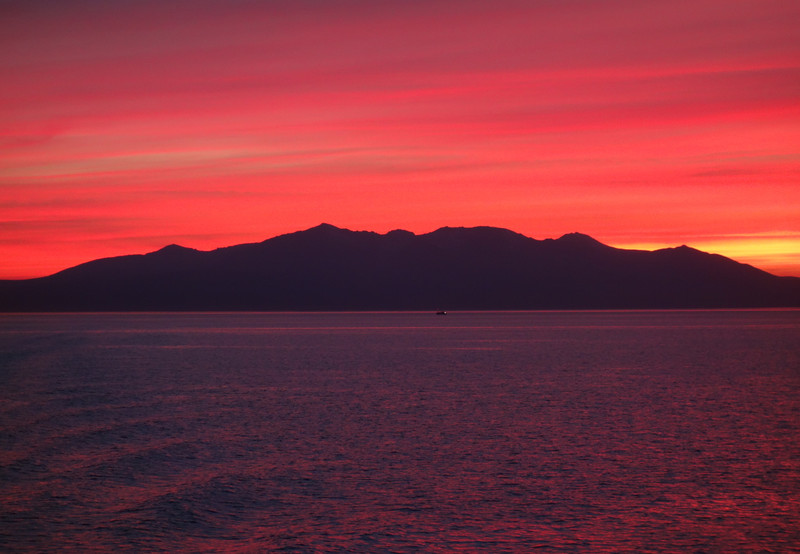 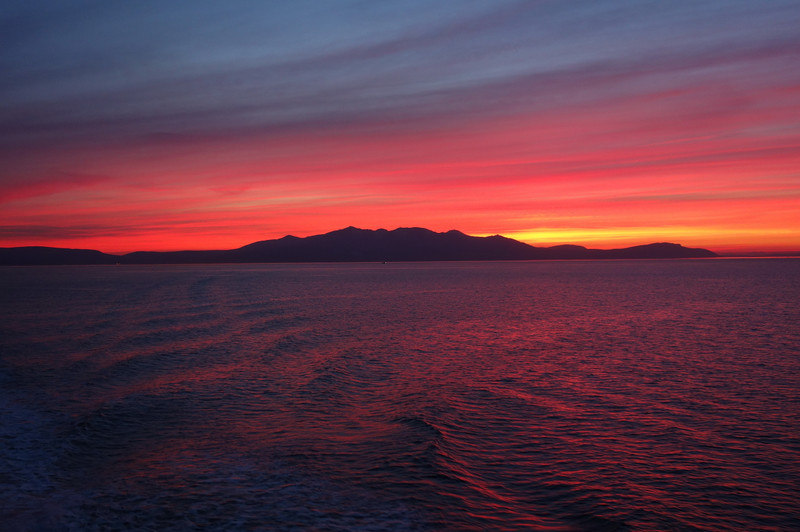 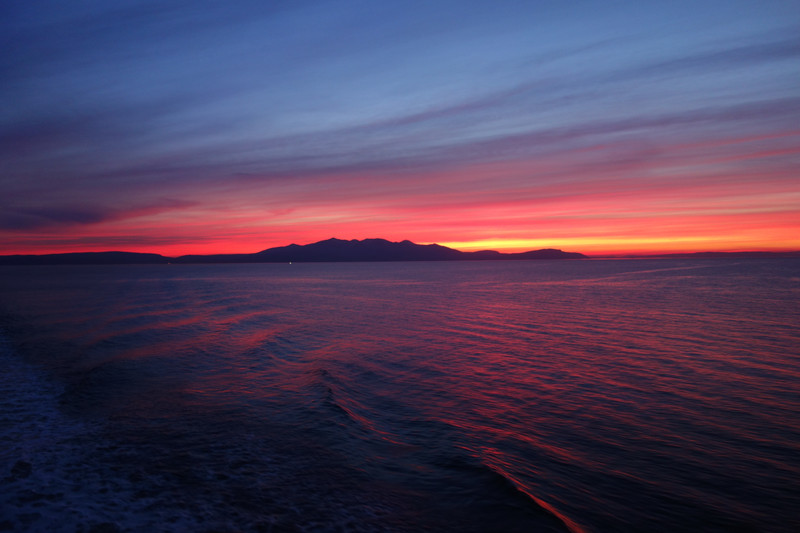 I was already feeling that I had experienced such a wonderful day but the sunset took it to a whole new level, one that will live long in the memory

My friend Ian was meant to be over cycling and we’d arranged for him to drive me back to Glasgow, however he couldn’t get over…but he did come and provide a lift – top bloke

I got home after 10pm, totally buzzing but equally shattered. Been a while since I walked 20k and 3 Corbett’s, but I can’t wait to do it all again...

Arran has it all and I recommend you visit it soon - only £15.95 for a rail & ferry return, so no excuses

The Arran corbetts ARE fantastic. I need to get back over there.

I didnt recognise you in those pictures. Its not like you to pose

Good to hear from you and that your knee is improving. Maybe it's an age thing

nice report , still sounding as excited as you were on the boat !

i`m just getting around to my pics and do a wee report, need to educate those Mad Munroists more about the Arran Corbetts and Glens

Cracking WR Paul and what an advert for Arran - one of my favourite places.
You should have taken some photo's of your 'interesting' descent

Days like that are very rare and so special, you really were rather lucky and the sunset was pretty amazing

. Watch them knees now you need to complete this year

That is some view from Caisteal Abhail and a wonderful sunset. Good luck with continuing your recovery. Been there (almost literally) -Caisteal Abhail three years ago with a bad back.
Interesting too to think that a bit of sensory and/or hillwalking deprivation might add to a walk. I certainly felt that after hospitalisation last August -first walk after that the colours all seemed to have extra intensity. Wore off though, dammit!

Arran - and especially this bunch of hills - is a truly wonderful place; and good to see it with a dusting of white.

Those sunsets on the ferry back can be spectacular, but you seem to have caught the mother of sunsets there!!!

Good luck with your "convalescence"

The photo of that descent off CM

mountain thyme wrote:The Arran corbetts ARE fantastic. I need to get back over there.

You only went the first time when I dragged you over, to busy ticking lists. And now not wanting to do repeats

rockhopper wrote:Good to hear from you and that your knee is improving. Maybe it's an age thing

Ha ha, slow down...like you and them epic walks

I am being good this time though

tomyboy73 wrote:nice report , still sounding as excited as you were on the boat !

Love being up high

Good to see you

Fife Flyer wrote:Cracking WR Paul and what an advert for Arran - one of my favourite places.
You should have taken some photo's of your 'interesting' descent

Days like that are very rare and so special, you really were rather lucky and the sunset was pretty amazing

No wauy the camera was coming out on that descent

. Watch them knees now you need to complete this year

litljortindan wrote:That is some view from Caisteal Abhail and a wonderful sunset. Good luck with continuing your recovery. Been there (almost literally) -Caisteal Abhail three years ago with a bad back.
Interesting too to think that a bit of sensory and/or hillwalking deprivation might add to a walk. I certainly felt that after hospitalisation last August -first walk after that the colours all seemed to have extra intensity. Wore off though, dammit!

Bad backs are awful eh!! Yeah, the enthusiasm and sensory perception is more alert after a lay off. Cheers.

The ridge looks amazing, glad you managed to get out

Arran's been on my to-do list for ages... looks amazing!

Knee injuries... tell me about them...

As for repeats - at some point they just become necessary, especially in winter. We climbed 7 Muros so far in 2017, only one new, but every repeated hill was great fun.

Great to see you out and about again Paul.

Stunning stuff and great photographs hope to go over later this year, thanks for posting