A dreich day in Westhill - mist & drizzle, but elected to tough it out. Collected GordonC & Harvey - and hey presto, as we approached Huntly - sunshine, but still the odd bit of clag on the tops of the eastern Marilyns, But to the west - braw !
Took a "shortcut " to get to the bottom of our first target - Knockan. GordonC corrected my road nav error and steered us to the right place -what detour ?

Sneaked into a gap between the gate and the muckle boulder at the entrance to the eastern fannery at Hill of Towie. Swallowed our pride and walked up the road to the northern set of turbines on Knockan & Machatties Cairn. A light breeze had a little edge on it compared to the tropical conditions of the last few days.
Half way up we met a person in a 4x4 with a company logo on his fleece, who politely asked us not to park where we had, next time we came, as the gate was swung back 180degrees and tied to the fence. We apologised then mumbled all the way to the top on how easy it would have been to leave the areas at the entrance to the roads for a few cars to park, intead of putting muckle great boulders there or even to put a post in to tie the gate to. We felt that our ancient wrinkled brains were more than a match for these whizz-kid fannery site designers, as we'd immediately come up with several solutions to poor track design - the cost being mere pence compared to the cost of the project. Anyway - we're paying for these useless eyesores !
The guy scooted off to another fan while we walked up the gentle slope to the cairn amid the forest of fans. Surrounded by wind turbines on Knockan GordonC checking the height of Knockan Top of Knockan amid the fans

We were back down in no time to clear the gate area for his 4x4 to access to the site - with the ability to have the gate tied back.
Drove off in search of Ben Aigan, with GordonC poring over the map and giving instructions in staccatto bursts like a rally navigator. Nae bother this time, with both brains functioning.

At Balnacuil, the FC had kindly moved the gate further into the forest at the start of the path up Ben Aigan, facilitating a generous parking space. This had been done since the Google street view image had been taken.

The well-used path disappeared into the trees like the the cupboard in Jumanji.
We were immediately confronted by a stepped wooden fence, just into the forest, which had us puzzle for a few moments, before GordonC thought it might be used to stop cyclists bursting out of the trees into picnickers and scaring the living daylights out of them ! GordonC searches for the start of the track up Ben Aigan The path wound up through the trees at an easy incline , intersecting a newly upgraded track, presumably for some forestry extraction work. The path through the trees up Ben Aigan

A further section of forestry brought us out on to a path leading to the top. ( not shown on the map) The forestry had built a fence on either side of the path to guide us back into the forest should the weather turn inclement. Nae problem today, though - blazing sunshine all round. Great views all round to Rothes and across to Ben Rinnes. The path to the top of Ben Aigan 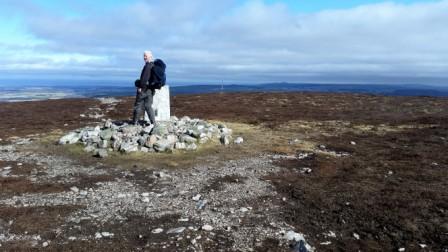 We sauntered from the trig point over to a wee subsidiary cairn then wanderd down to pick up the path again, to be funnelled down into the forest again. Had our lunch at the car with a super view over the glen down towards Dufftown and the Convals.

Drove back up to the A95 and up the B9103 to Cranloch Fm until striking south again by Strypes ( sounds like an affliction ! ) to park beside 3 workie vans at the bottom of the track up Broon Muir. Start of the track up Brown Muir

Headed up by the abandoned Moniemouies farm avoiding Harvey being run over by a 4x4 coming down the eroded track with a couple of folk in it. Five vehicles on one job - one per person - nae wonder the phone bills are big !
At the radio mast at the top, there were another couple of 4x4's laden with equipment and tools. 3 guys were working away inside on what looked like a fairly major installation job, with the other guy doing the mast work.
We wandered over to the trig point which sported a bunnet on top. It was a cast iron cap ( a wee bit broken - no doubt from being dropped , as it looked quite heavy). Never seen a trig point with a lid on it before - ever !
We wandered over to a bit of ground that may have been a few inches higher, then decided it wasn't.
Said hello to the workies, who were beavering away industriously over what looked like a major modification to the terminal equpment of the radio mast. The radio mast at the top of Brown Muir Trundled off down to the car & met a local loon walking his wee wally dug. He didn't realise there was a track up to the mast.
Drove home the scenic route via Duftown and Rhynie. We mused whether we'd been down this route before during the last century. Finally we concluded that we couldn't remember. ( what a surprise ) Passed a wee well made out of the spare masonry left over from the construction of the nearby bridges.
We congratulated ourselves on choosing the only hole in the cloud cover to enjoy an absolutely fantastic day in the distillery capital of the world ! Couldn't help but be impressed by the massive bonded warehouse farms that have sprung up in the area, to house the still-to-be-matured distilled scotch spirit being generated by these famous distilleries - Glenfiddich, Macallan, Glenlivet, Glen Grant, Craigellachie, Glentoucher, Balvenie, Ben Rinnes etc, etc. Makes me slaver just writing about them ! Seemed like there's a distillery on every corner in this area !
Must pay a visit to the cooperage that we drove past at Craiellachie - http://www.speysidecooperage.co.uk/

It was a glorious drive through magnificent scenery and in bright sunshine, but we gradually edged closer to the ominous mirk near the east coast, which eventually enveloped us after Alford.