What to do an a cloudy Saturday? Well, one can bag a few hills even if conditions are unfavorable. We still had a couple of unclimbed Corbetts in the east, so we went on another bagging spree, hoping to climb Morrone and Monamenach, which are both easy up-and-downs. As we had enough time left for a third hill, we added Badandun Hill, a nice Graham located opposite Monamenach in Glen Isla. Such a shame weather didn't play along and we only had views from the first hill, but trudging up boring slopes in total clag has become our second nature now, so no complaints from my side

Track_MORRONE 18-03-1730.gpx Open full screen  NB: Walkhighlands is not responsible for the accuracy of gpx files in users posts
8 o'clock sharp, we started from the car park in the center of Braemar. It is possible to park at the top of Chapel Brae, but it saves little distance. At the moment, no rain and very little wind, but the sky was so grey and depressing that we were already resigned to "a cairn in the mist" experience. Of course, in case of Morrone, it's a big mast in the mist

Bridge over Clunie Water - rivers still in spate and I was glad we didn't plan any hills with stream crossing today: By the duck pond, we met a small flock of young, male ducks, obviously used to being fed, as they swam to us immediately and begged for crumbs The paths above Breamar are well marked so it would be difficult to get lost here. It felt like autumn though, very moody atmosphere at the moment! We walked past the viewpoint and continued on a good path uphill. Cloud was low on the Cairngorms once again and the only view we had was down to the village:

At about 700m, we entered the snow zone. Now, this was something different! Two days earlier when we bagged Carn na Drochaide, there was no snow on the lower hills at all, now winter was back, if only for a short time.
Snow and dark Cairngorms in the background:

A few patches of blue sky in the east, but we knew a nasty front was coming from the west, no hopes for clear views this time... A couple of inches of the white stuff at least added some fun to walking. It's not a long climb and soon we saw the summit with all its clutter: We reached the mast and the trig point just before the western front arrived, so we had a short weather gap to take some photos and videos. At least some views today...

Looking south towards Sgurr Mor and An Socach:

A few more panoramas, nothing too exciting but better than a cairn in the mist:

Corbett no. 113 (and 35 for Lucy). As we posed for a summit snap, we were showered in snow and ice falling from the mast above Kevin found a safer place for a summit photo. He he he.

Zoom through the gaps in clouds to the tors of Ben Avon: One more Cairngorms pano - enjoy the views as long as they last (not for long today):

Brace up and get ready for the shower, the western front is coming!

Five minutes later the cloud arrived and it started snowing, so we wrapped up in waterproofs and started to descend back to Braemar. There was no point continuing along the track for a circular route today, maybe we will re-do this hill in better conditions sometime, but for now, it was "a quickie". We met some people heading up as we descended, they would see no views at all (sometimes it pays to be up and walking early). Lower down, the snow turned to rain but it wasn't very heavy. We stopped by the pond where I couldn't resist sharing a few oat biscuits with the ducks. We were back in the car park in just under 3 hours. I hoped to take some photos of Kindrochit Castle, but it was still raining so I gave up and we set off immediately on our way to Glen Isla, where we had another unfinished business to climb, called Monamenach.
...............................
2. Monamenach
Distance: 5km
Ascent: 443m
Time: 1hr 45min

Track_MONAMENACH 18-03-17.gpx Open full screen  NB: Walkhighlands is not responsible for the accuracy of gpx files in users posts
By the time we arrived in Glen Isla, the rain has stopped and wind dropped down to almost nothing, but the clag was sitting very low on surrounding hills, so we knew there would be no chance for any views from the second summit. We parked at the end of public road in Auchvan and prepared for the climb.
Bridge to Dalhally: We visited Glen Isla a few years ago when we climbed Driesh and Mayar from this side, we should have added Monamenach then but we didn't even realize it was a Corbett

Now it was time to correct the omission.
The way up - low clag, boring slopes... Rather than returning to Auchvan (as WH description suggests) we took a shortcut across a wet meadow, jumped over Glack Burn and avoided some boggy ground, before emerging on a wide track.
Panther short-cutting:

Looking back to the car park from the track above:

Following the track, we soon walked into the mist and Kevin was very unhappy - nothing to photograph!

The main track turns south at the top of the col, but another, grassy one climbs due north straight to the summit of Monamenach:

We marched up to the summit, which is easy to locate - a cairn by the fence. No views and it started raining again, but Corbett no. 114 bagged: We retraced our steps down the track, disappointed about cloudy summit, but ready to tackle another one!
Bring on more speed bagging! We had about 4 hrs of daylight left, enough to climb a quick Graham, so Badandun Hill on the other side of the glen came to our minds as a perfect time-filler.

Track_BADANDUN HILL 18-03-17.gpx Open full screen  NB: Walkhighlands is not responsible for the accuracy of gpx files in users posts
This hill can be climbed in a few different ways, making a nice circular using the existing net of stalkers tracks, but we didn't have time for that option. The easiest approach begins from 190684, where it's possible to park carefully by the entrance gate to Fergus: The clag was still low and with windless conditions, no chance of it lifting: River Isla from the bridge:

The track follows Fergus burn, then climbs uphill to a lower top Craig lair, usually it must be a pleasant stroll with nice views across the glen, but we just had cloud for company

It started to rain again, not much more than a drizzle, but due to lack of wind the air was so humid it almost felt unpleasant...

Just before reaching Craig lair, we turned right and took another track, this one a bit boggy in places, heading for the summit of Badandun - more walking in cloud...

The summit is marked by a trig point and a small cairn nearby. Views - zilch 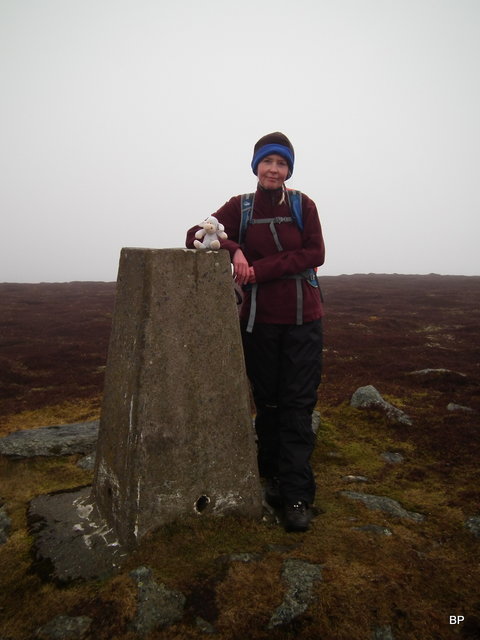 It is possible to drop straight to Fergus from the summit, but we couldn't be bothered to navigate in the mist, so we took the no-brainer option, back down the track, with a little shortcut across the moorland, avoiding the re-climb to Craig lair. The clag lifted a little bit as we descended:

Less than 3 hours and another hill in our bag

though it didn't really feel that much!
..................
There's one more report to write, this one the complete opposite to my previous stories. A remote Munro with superb panoramas

A day not wasted

Parts 1 & 2 - efficient way to collect quite a few hills around here, did something not dissimilar a few years ago but without the snow. Think I had similar weather to you though on Monamenach and Badandun Hill

Impressive motivation demonstrated in both parts. I suspect I'd happily just do one per day...