An early start ensured me a beautiful morning's drive to the car park at the Corrieshalloch Gorge. I'd never visited before, and was excited at the prospect of stupendous views and an assured adrenalin rush from the experience gained from the suspension bridge. I suppose I should have done a little more homework though, since it turned out that due to having found a fault in the bridge structure, the governing authorities had decided to close the suspension bridge and the viewing platform

Add an almost immediate downpour to this disappointment, and you have one very wet and disappointed walker. On the up side, I suppose I still got to visit. Half a walk was better than nothing. Excited that I was going to see a spectacular gorge from an awesome bridge, I chose the shot walk through the "Kissing Gates" only to find the bridge, (and therefore, the viewing platform) inaccessible. I decided to continue the length of the path, and was treated to rather murky views of the gorge, from the viewpoint at the Northern end of the gorge. The midges were out in some force, and the final ascent back to the car park via "Lady Fowler's Fern Walk" was pleasant enough, though strenuous given the poor conditions. Views toward Loch Broom were non-existent too, but all-in-all I was glad I'd come.

Note: Not sure If I could have got to the viewing platform from the other side of the Gorge. Maybe someone knows. Anyway I didn't investigate the possibility since the rain was by now ridiculously heavy!

Undeterred, I decided to head off to Shin Falls, but that's another story The gorge from the viewpoint. We were up at Ullapool last week and didn't know the Gorge was shut until someone popped the local newspaper through our door. Not sure how well publicised it was... I suppose the only consolation you can have is that it's a good job they found out the bridge weakness before you or someone else were on the bridge and it failed!

Wouldn't like to say for sure. I visited this spot last year after doing An Teallach but I walked over the bridge and down to the viewing platform and didn't notice any paths from the Ullapool road. There is a rather large layby right opposite the gorge on the Ullapool road but, looking at it in Google Earth 'street view', there doesn't appear to be any access to the gorge from it. This is what it looks like from the bridge on a good day!! There is a nice little suspension bridge at Rogie Falls near Garve though. 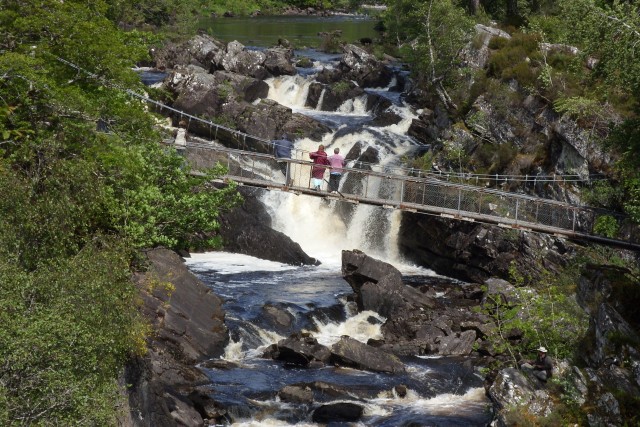 The layby/car park to the north side used to be the main access point.
Think it was discontinued because of traffic problems - people crossing the main road etc
So I suppose there must be some sort of path from that side though maybe a bit overgrown.
I believe that they are considering reinstating access from that side - wonder if the bridge weakness is related

Sorry you found the gorge closed - the first we'd heard but it sounds like it closed only in the last week. The NTS say it will be temporary. Hopefully this will be the case as I think the bridge repairs and new viewing platform cost a small fortune

There is no longer access from the Ullapool road as this was closed (following wind damage) a few years back.

We've put a note on the walk description.

Not so sure about the closure only being in the last week Paul. There was a notice of explanation at the gates, which stated that they hoped to have it re-opened to the public in early September. I took that to be this month and perhaps mistakenly this year, although I think I'd have noticed if it had said 2011. Also, the notice(s) looked to have been there for some time. Surely the relative authorities will have the info. Nice to see all the replies to my first post too by the way. Thanks to everyone!!

This the layby on the Ulapool Road. And this is probably what Paul means? We went from the main Ullapool road a few years back when we saw it... the bridge was accessible from either side. But the path probably has overgrown now if they've shut that route... Having said that, the engineers were parking in that layby to do the repairs so they must have been approaching from there. But if the bridge is shut, I don't think you can see anything which ever side you approach from.

Was down at the Bridge 1st week in July of this year and it was opened. Have to say there were a quite a few tourist buses full of people all making there way down to the bridge and none of them took any notice of the 7? people at a time on the bridge, no wonder its closed!!