A quickie on the south side of Glen Shiel

A quickie on the south side of Glen Shiel

No big plans this weekend, but Sunday afternoon seemed to be shaping up to be better than forecast - worth begging for the car and going somewhere not too far away. I had fully intended to do this route (or something similar) in the winter, when it would give easy access to firm, snowy ridges, but winter didn't really happen and on the days it did, I was doing something else.


Map.gpx Open full screen  NB: Walkhighlands is not responsible for the accuracy of gpx files in users posts
I parked up in a layby on the A87 at about 2pm and crossed the road to pick up the stalker's path onto the South Glen Shiel ridge. Most folk seem to want to do this in a oner (as I have in the past), but it is worth exploring the various spurs that drop down into upper Glen Shiel - they always look interesting from the road.

Sgurr na Ciste Duibhe and the top of Glen Shiel: 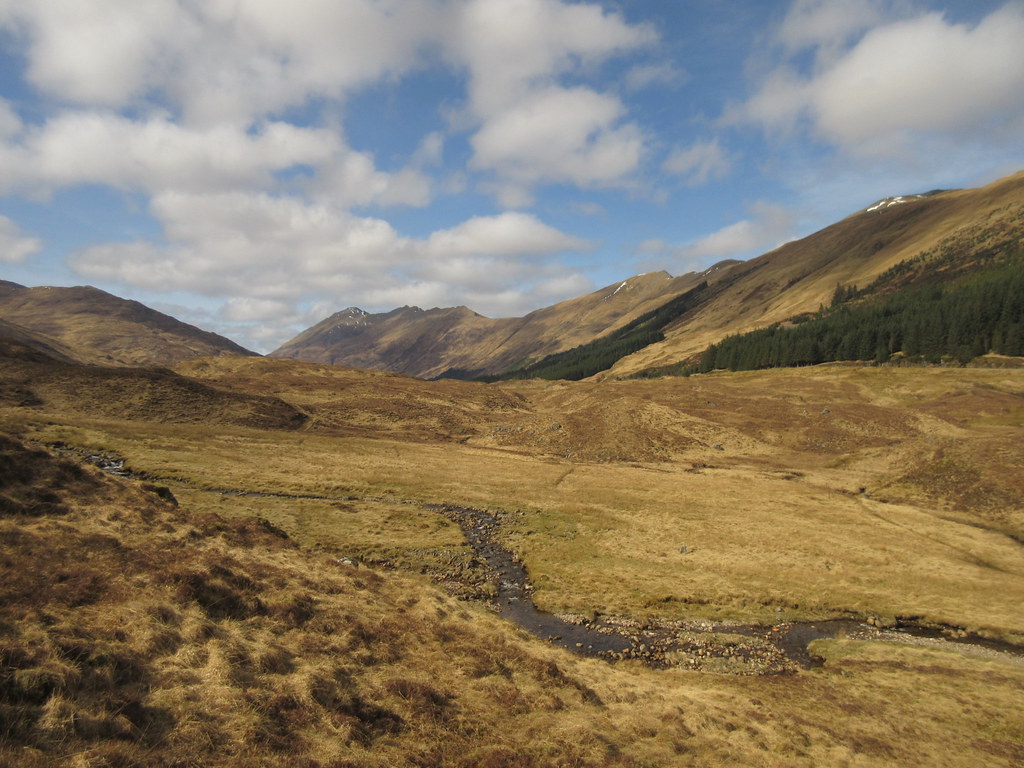 The path certainly had some wet patches, but got me up high nice and quick. I had contemplated doing the route the other way round in order to be covering the potentially awkward ground on the NE ridge of Sgurr an Lochain in ascent, but I decided that I preferred walking from east to west. I could worry about finding my way down later.

A' Chralaig and the head of Loch Cluanie: 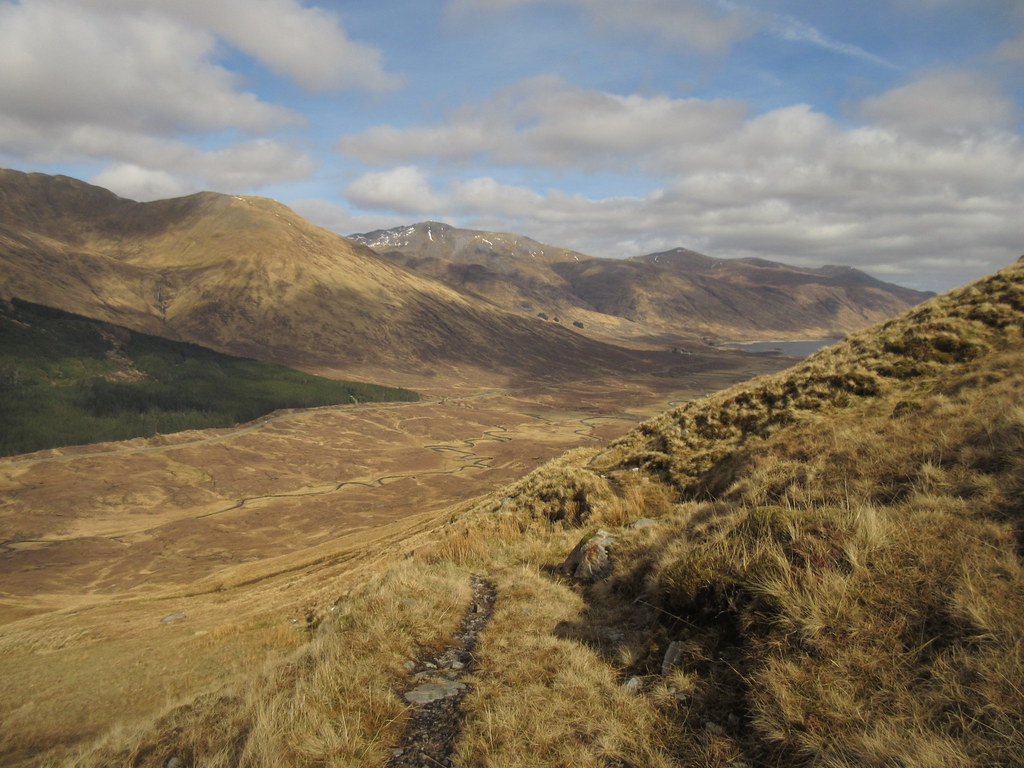 By the time that the made path petered out, I was on short grass and an obvious spur - indeed there was still a bit of a path scratched in the ground all the way up. The crags of Aonach Air Chrith look good from here. 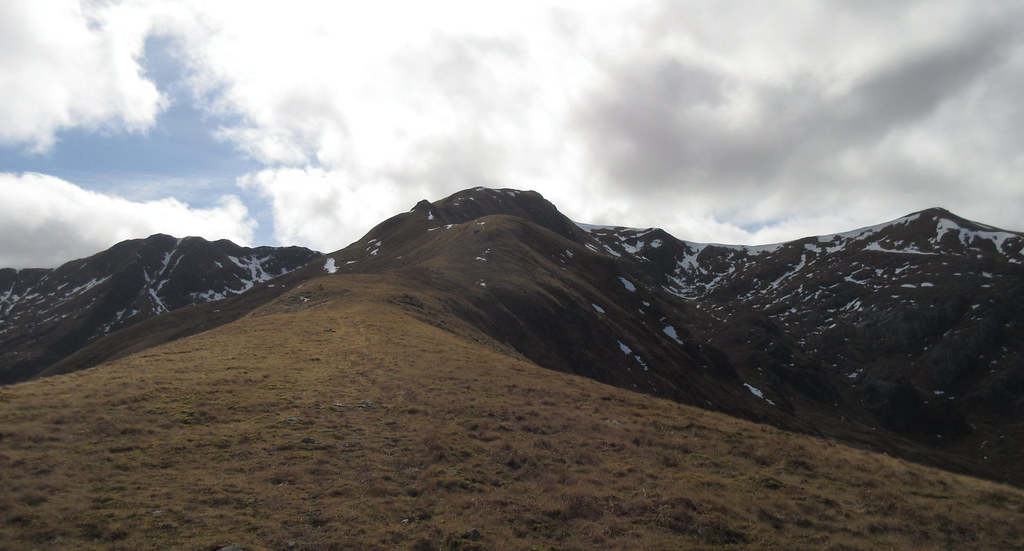 The spur made light work of the ascent onto Maol Chinn-dearg and I felt like I had only just started when I got there. A bit of a nippy breeze on the summit, but plenty of sunshine in most directions (Cuillin looked like it was taking the worst of the weather).

Back down the ridge; Aonach Mheadoin behind: 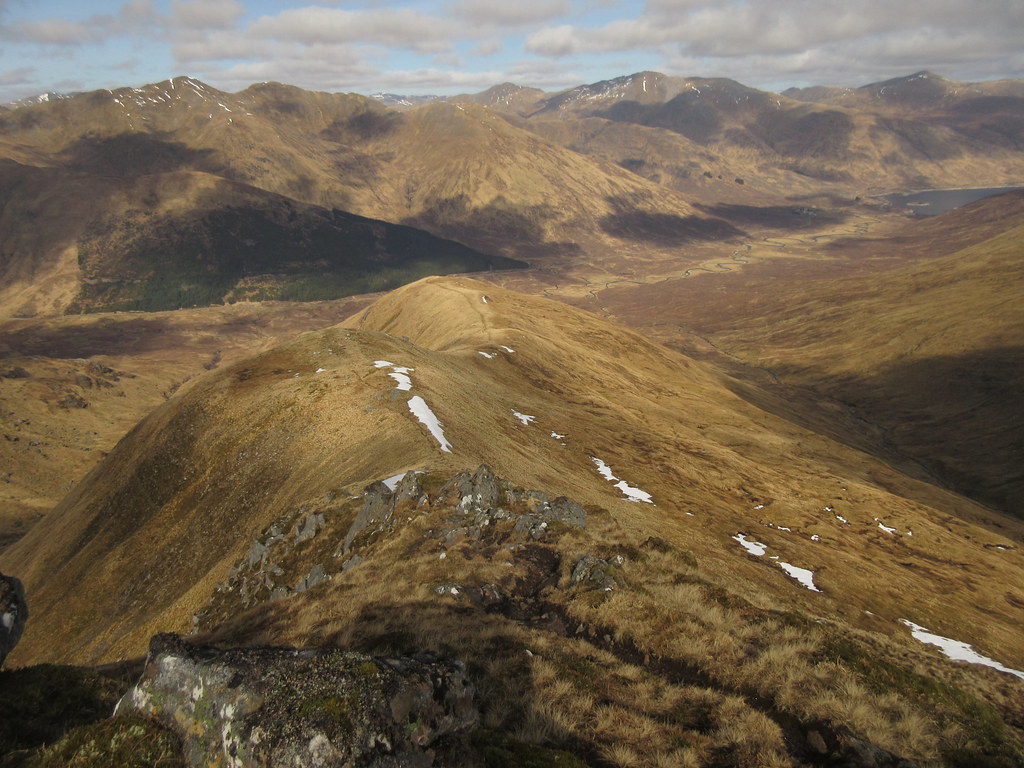 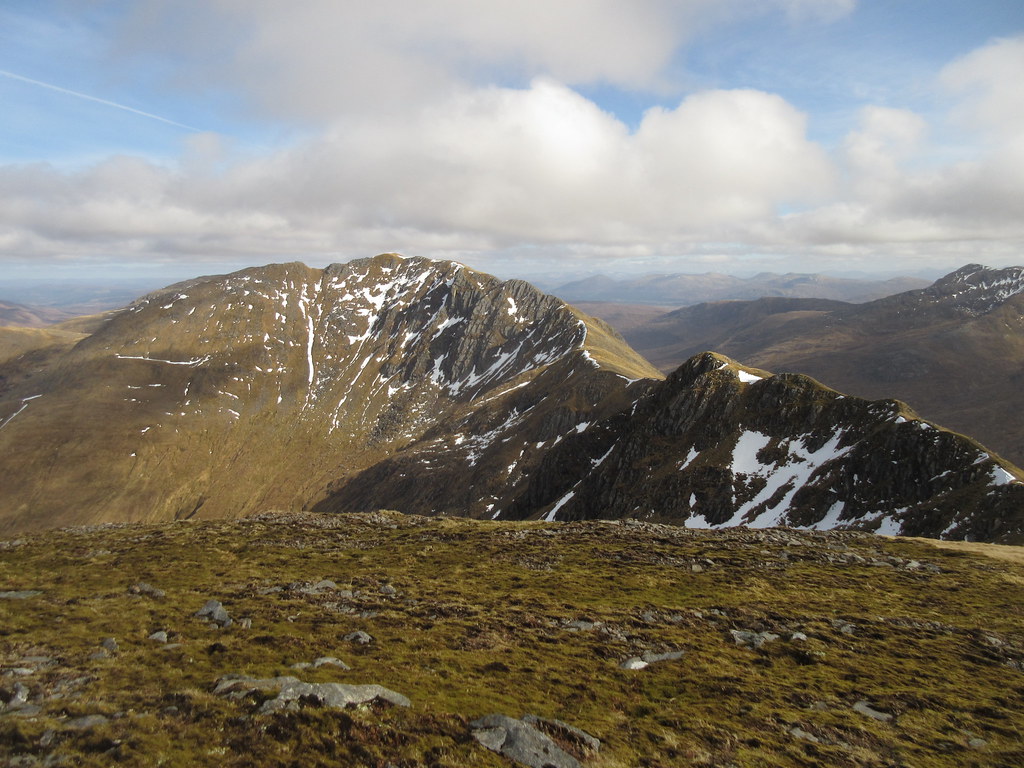 Loch Quoich and the edge of the Rough Bounds, then onward into Ardgour: 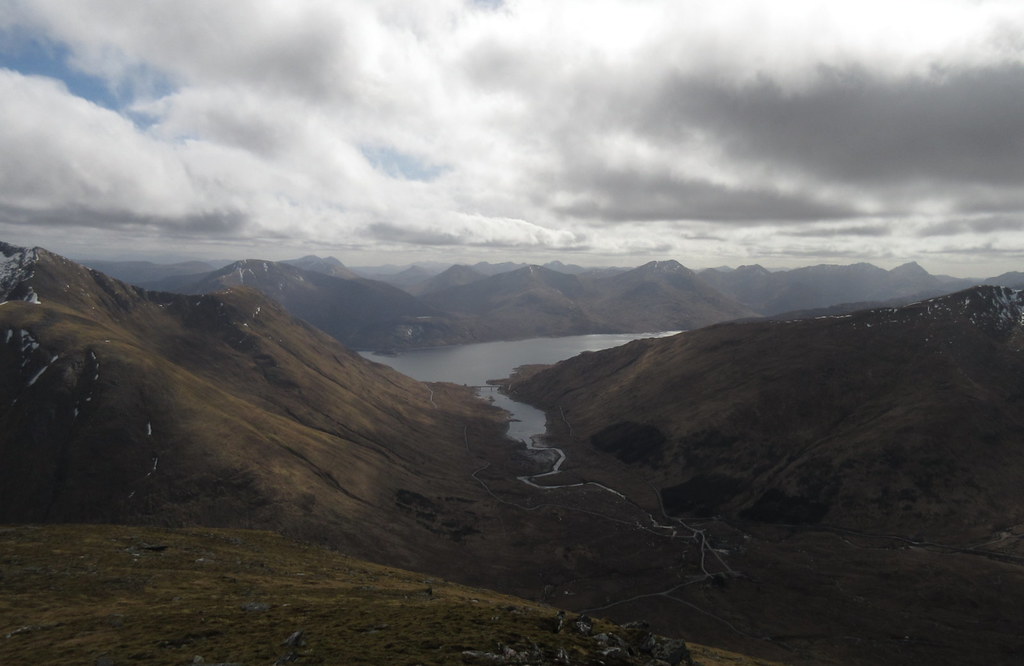 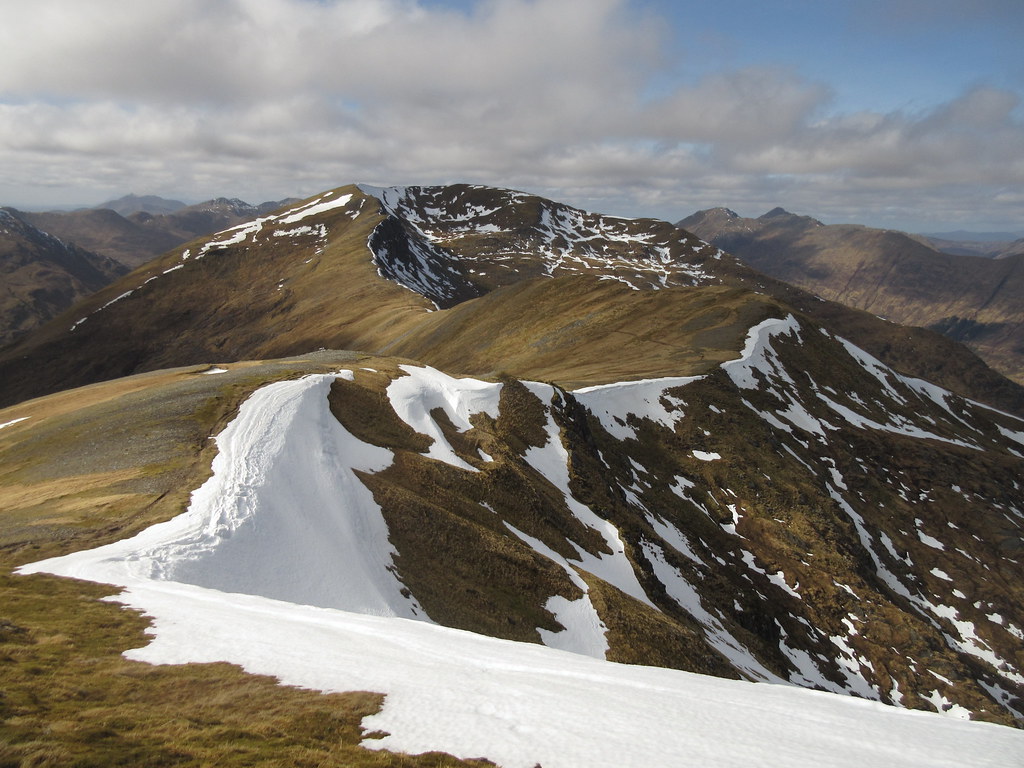 It was interesting to see what was going on in hydro-scheme world down in Glen Quoich - I had seen some of this from the Loch Quoich road last week. There appeared to be far more tracks than necessary, with a new one skirting the foot of Gleouraich, seemingly just to provide alternative access to Alltbeithe. Of more interest was Gleouraich itself - I have long intended to do a round of it and Spidean Mialach from Cluanie. The N ridge of Gleouraich certainly looks good.

Next up was the minor rise of Sgurr Coire na Feinne, which is where the other stalker's path emerges - looked good for another day.

The other ridge with a good path - Druim Thollaidh: 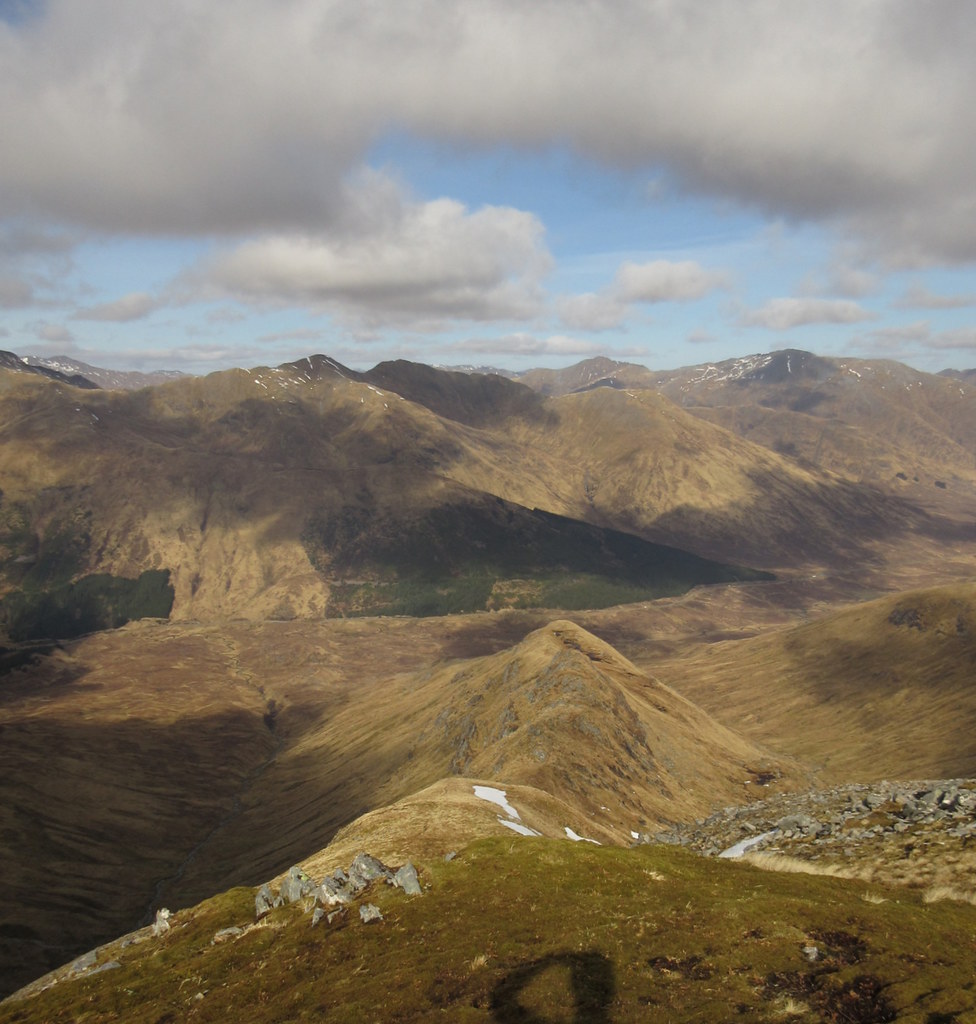 Gleouraich. Been thinking about the north ridge of this for some time: 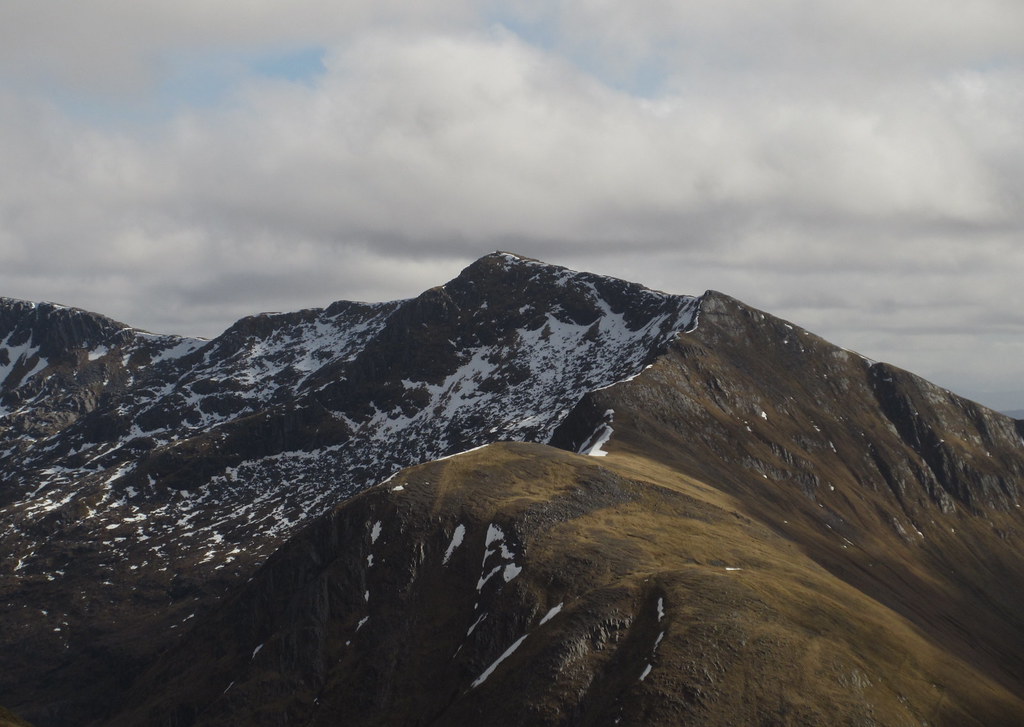 Then a sharper rise onto Sgurr an Doire Leathain, where I had a break. Views to the west were improving all the time. 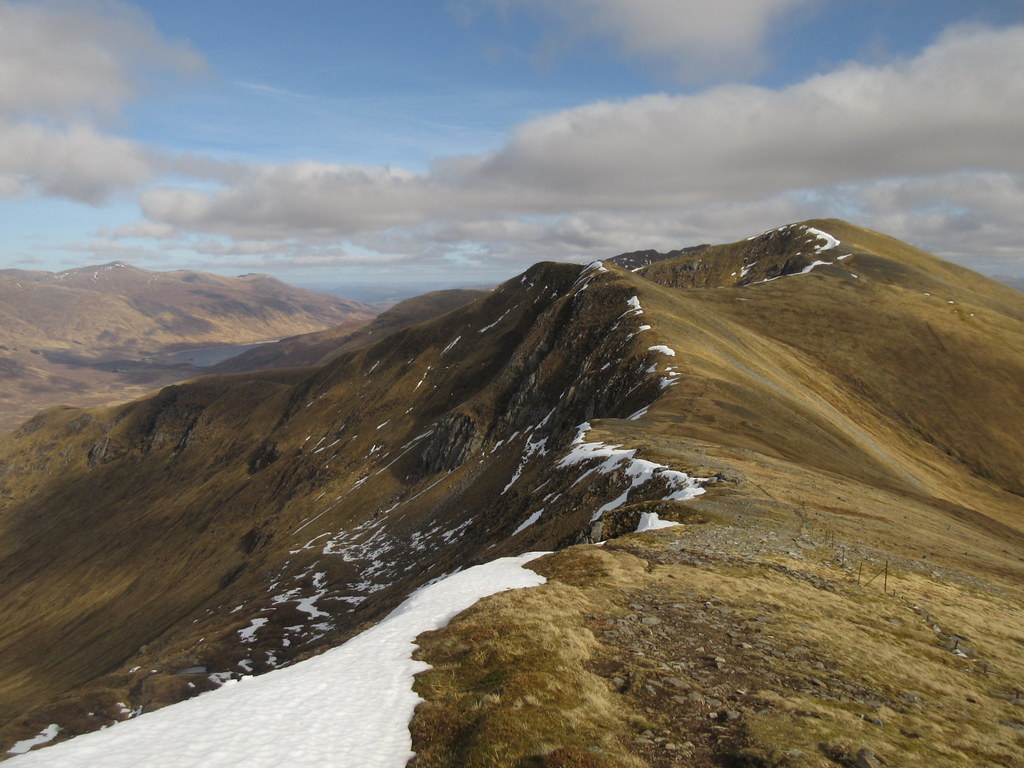 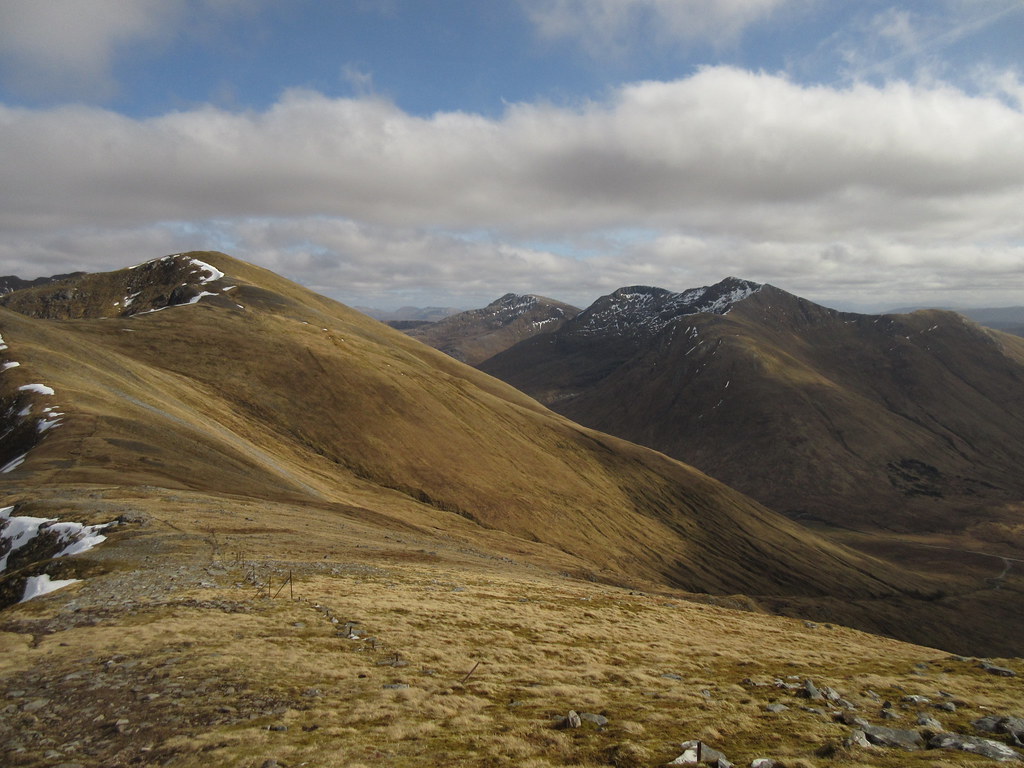 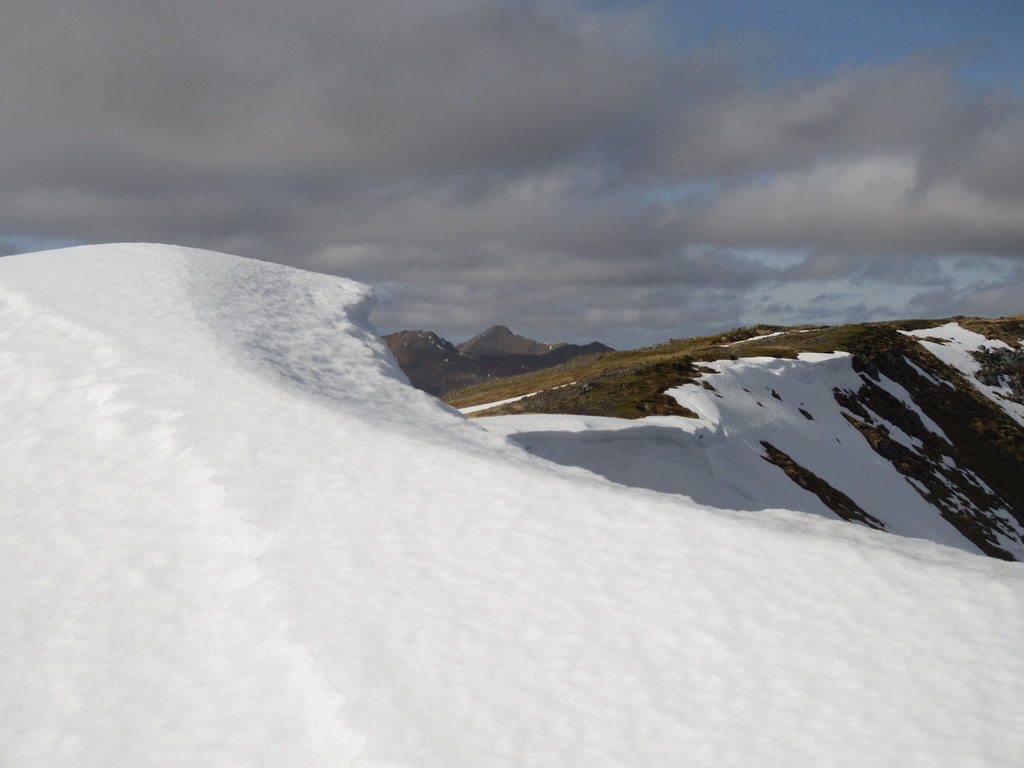 I could see Sgurr an Lochain from here - the most interesting looking of today's trio. To be fair, all of the summits have character, but as I'd previously traversed them in one go on a miserable day, I had no real memories of them, and have always struggled to put names to them.

Sgurr an Lochain comes into view: 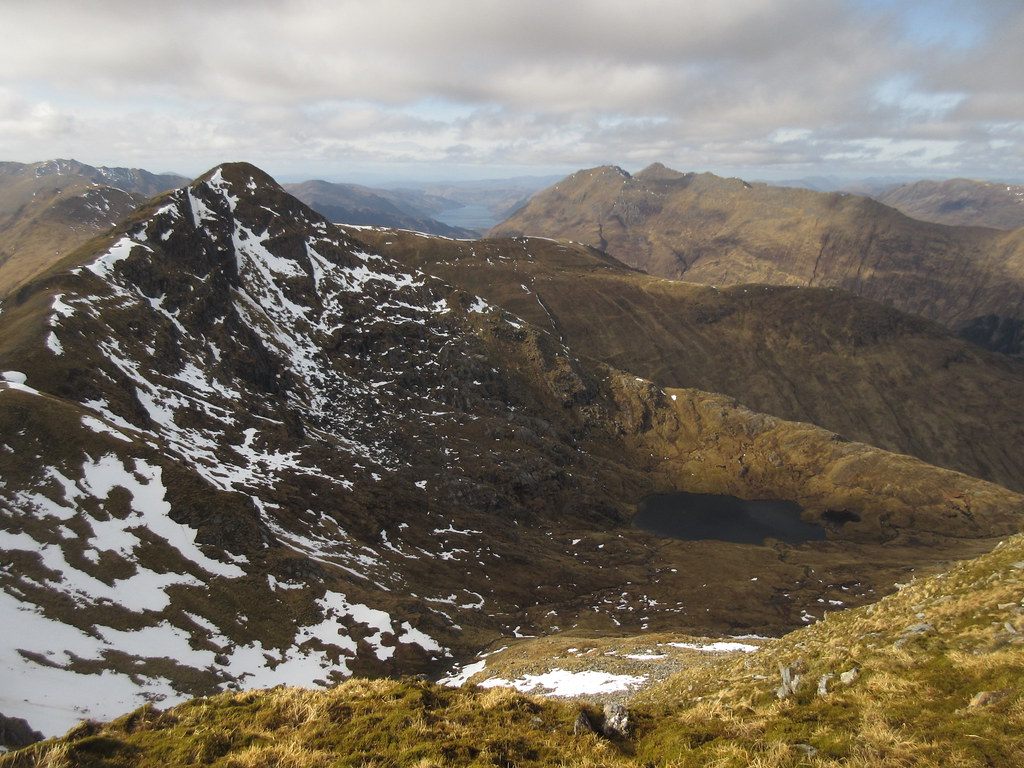 Sgurr an Fhurain and Coire an Lochan: 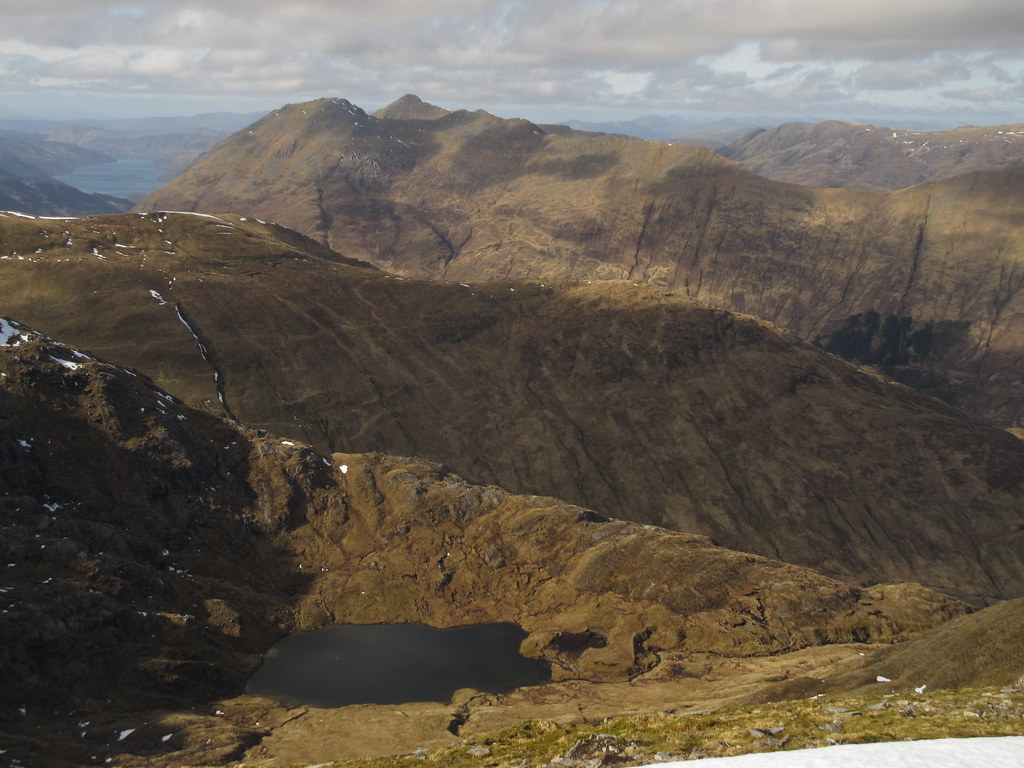 The NE ridge of Sgurr an Lochain looked no easier from here than on the map, but I reckoned there was a way down it. If not, I spotted a couple of points along the ridge that I would be able to return to and drop into Coire an Lochan if required. 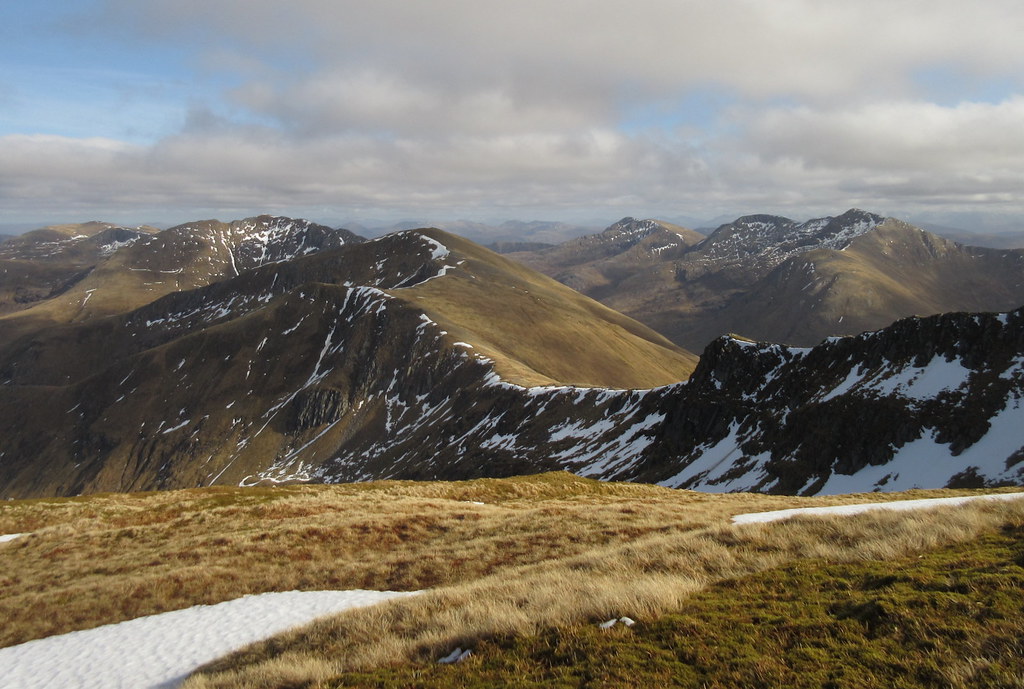 On the ridge to Sgurr an Lochain: 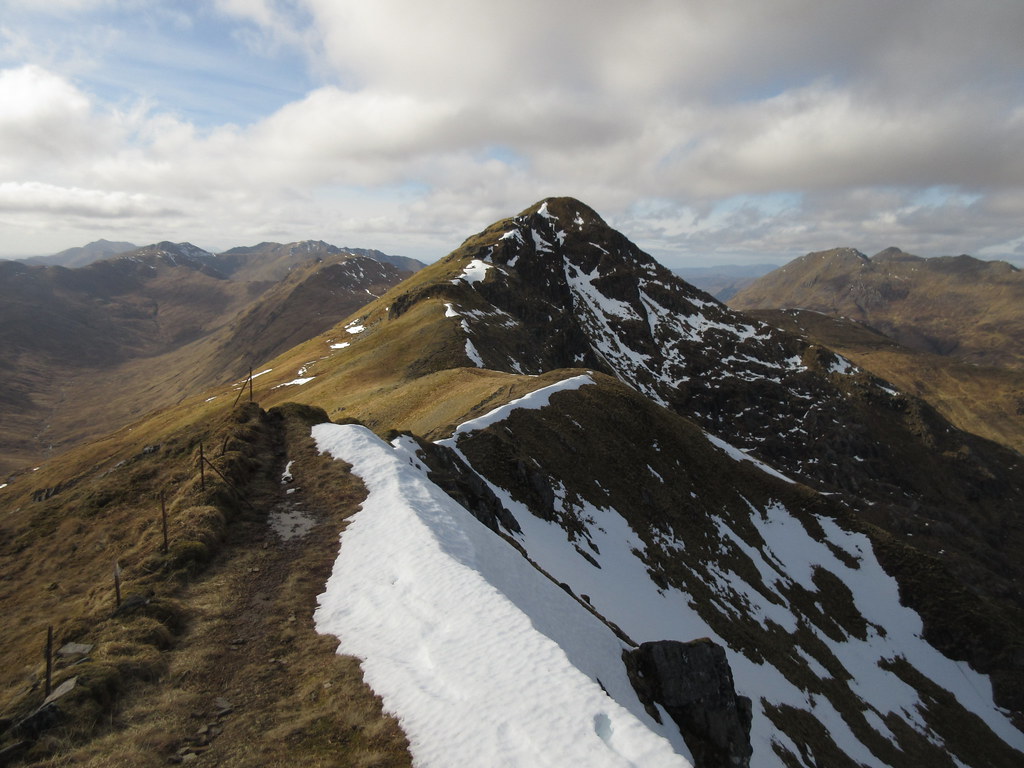 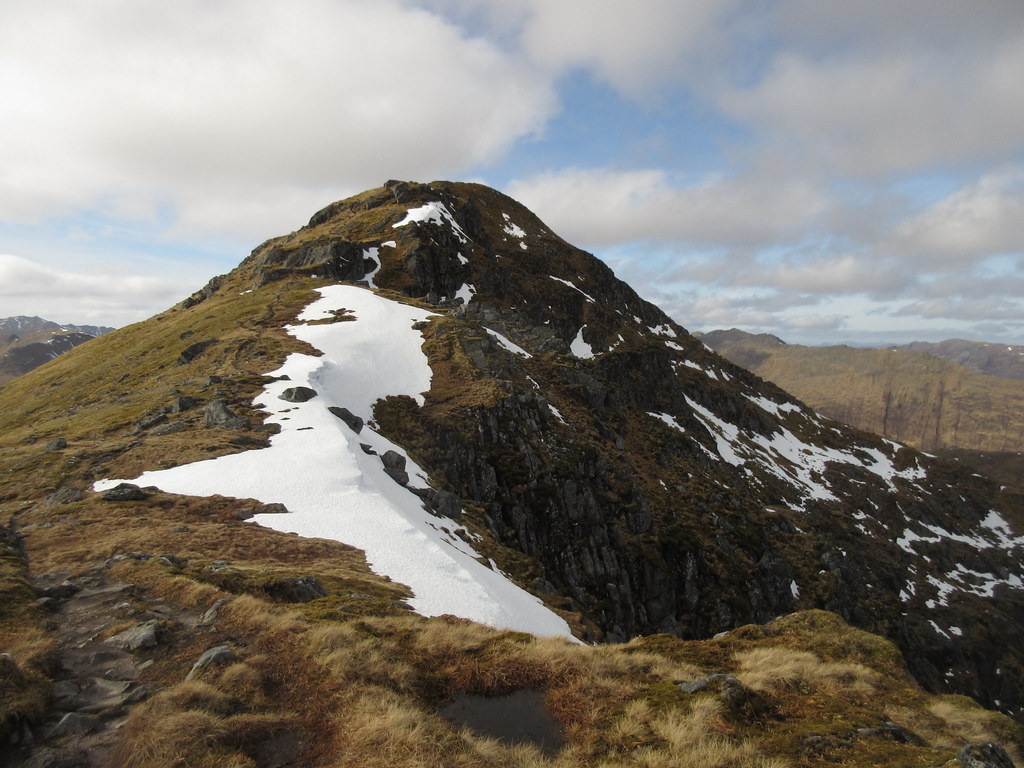 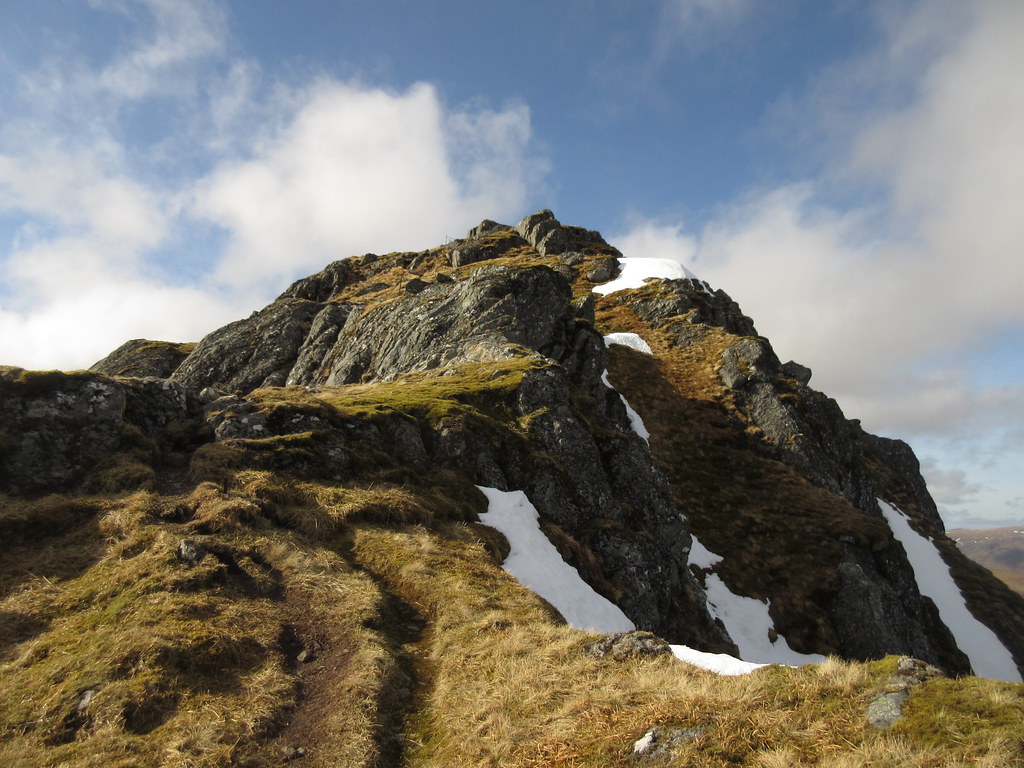 Coire an Lochain and Glen Shiel: 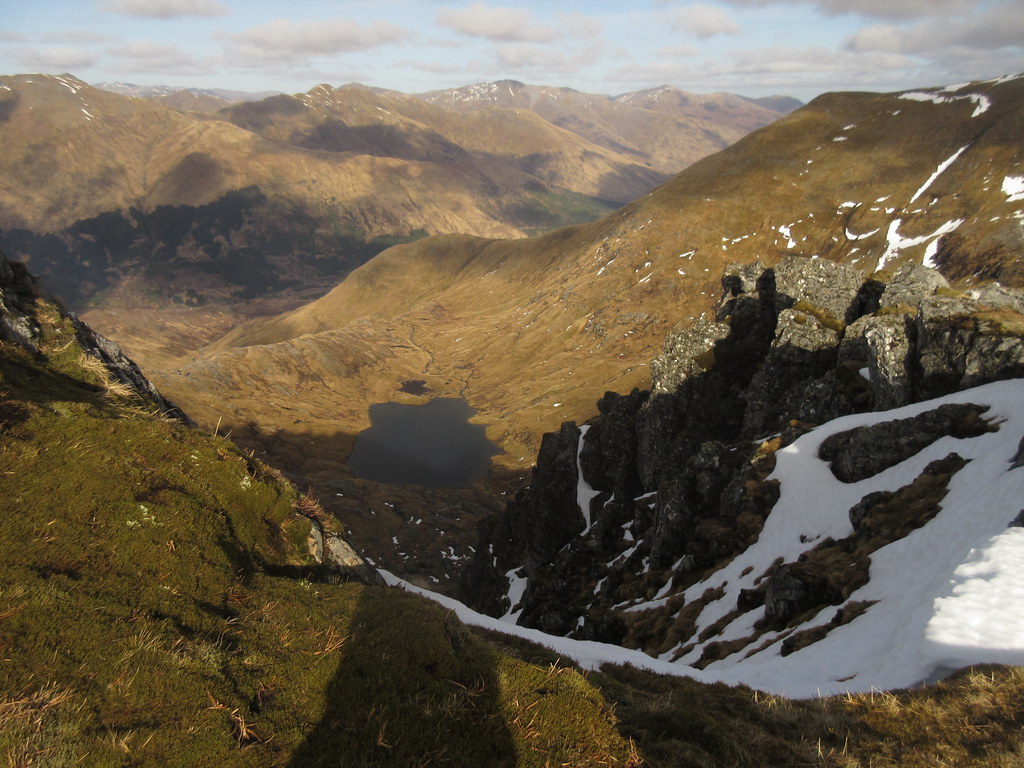 Finally I reached Sgurr an Lochan, where there were tantalizing glimpses of Rum and the southern end of the Sound of Sleat. Then it was time to pick a way down.

Torridon peaks in the distance: 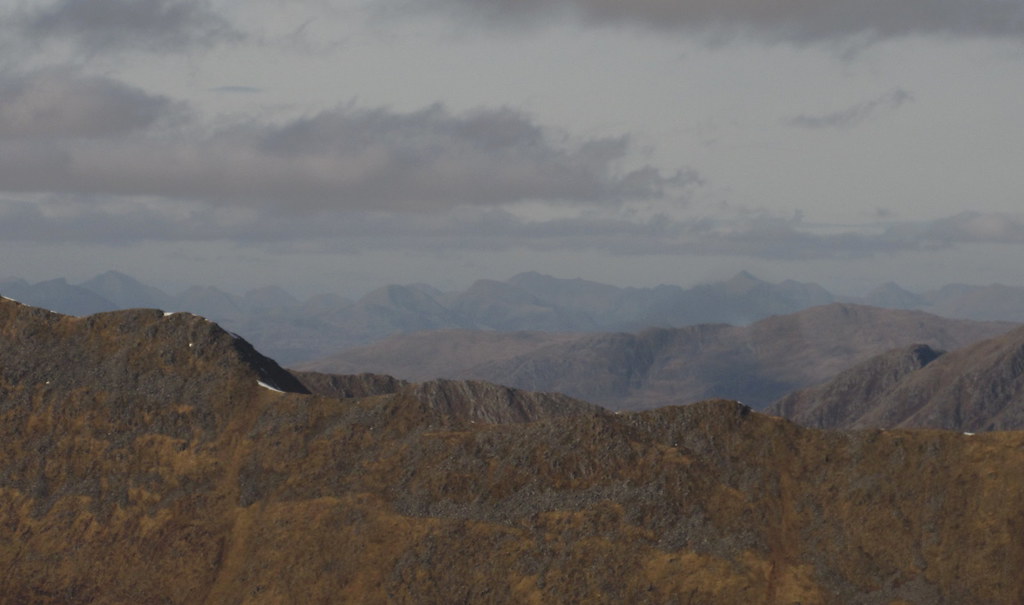 ...and most likely the Isle of Muck: 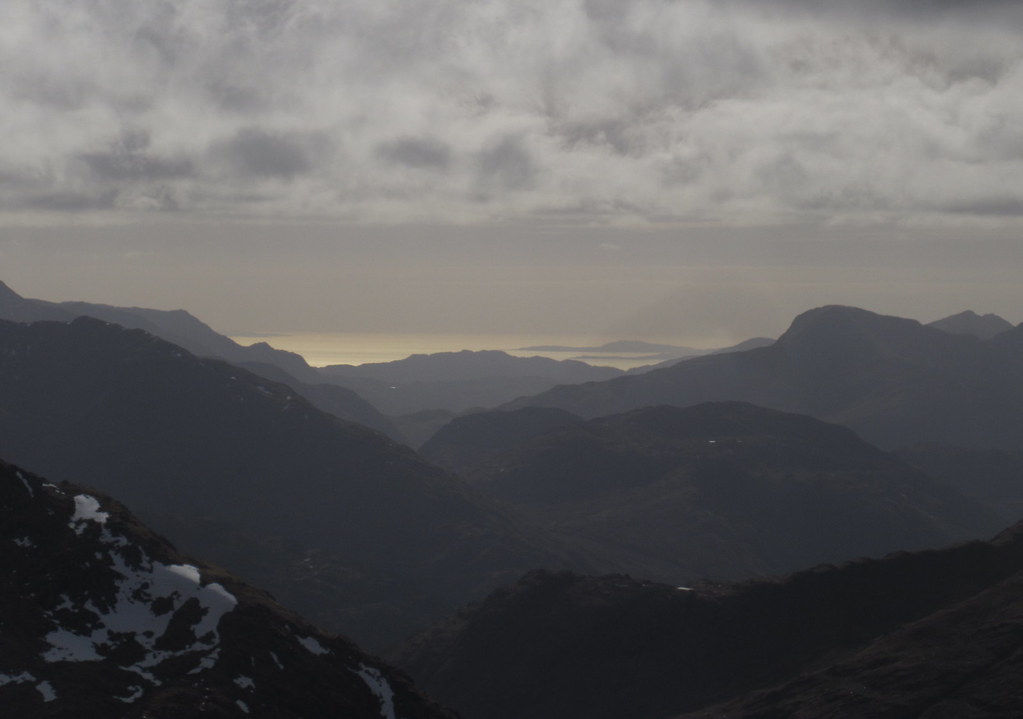 The NE ridge was certainly steep, and you wouldn't want to be on it with any kind of avalanche risk, but today it was mostly grassy and mossy. If I had been in the clag, I probably would have dismissed it as unpromising, but today I could see a clear way down. Hands needed for balance a couple of times, but it was way easier than my worst idea of it.

NE ridge of Sgurr an Lochain: 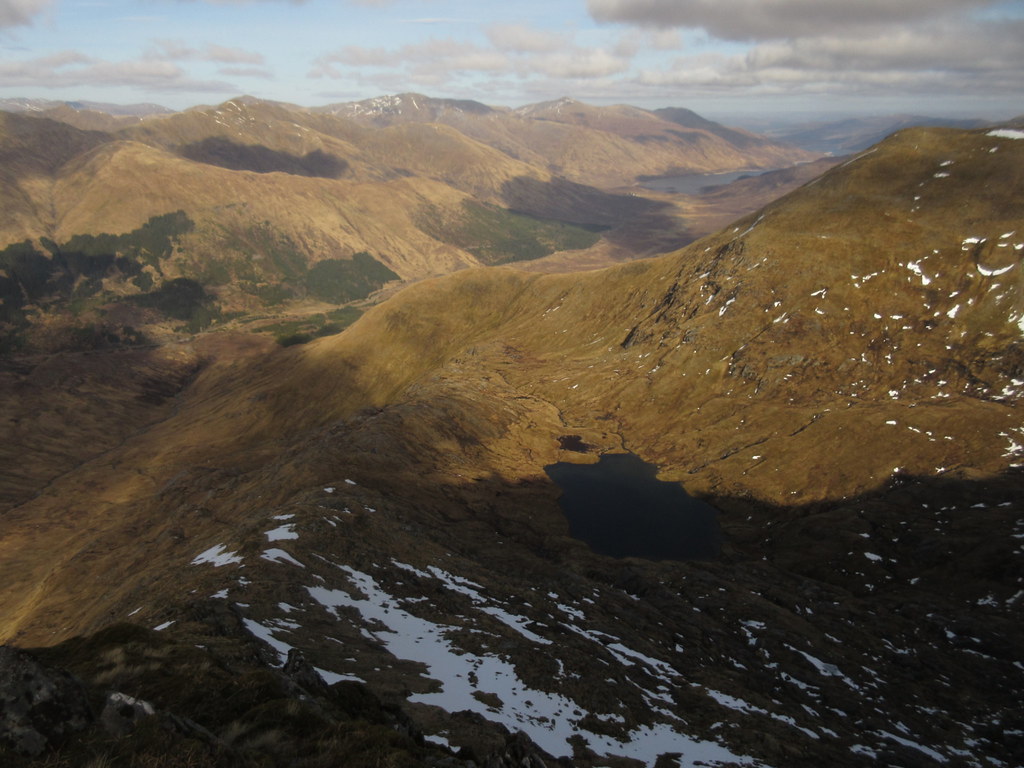 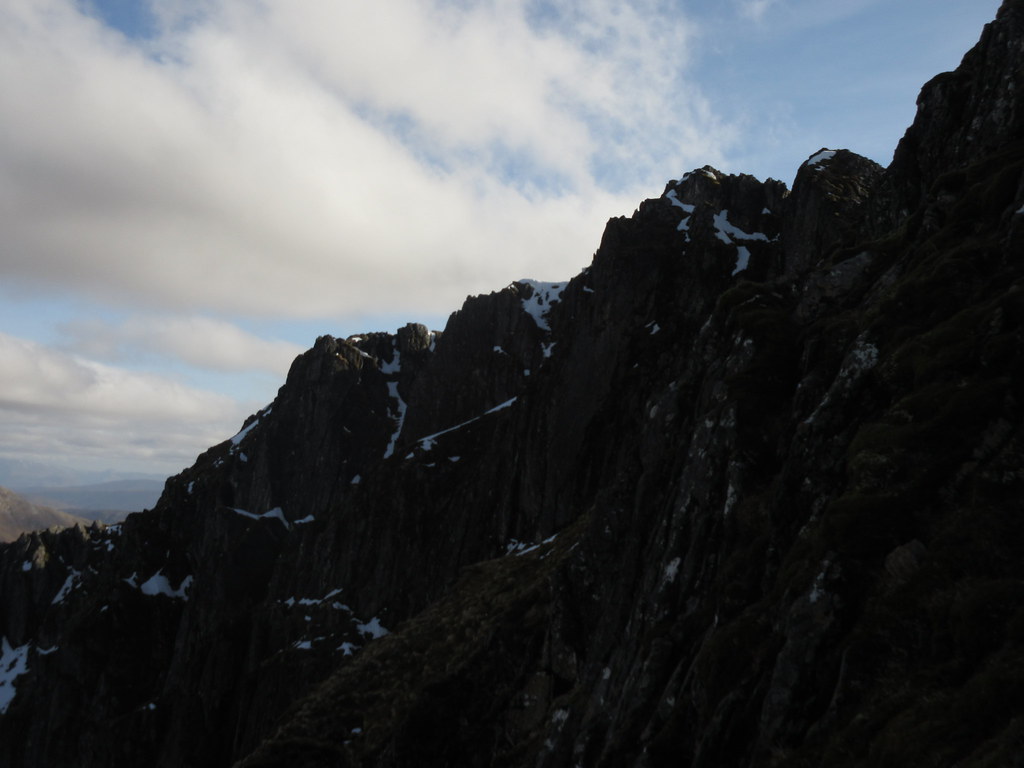 Good views back to the crags at the back of Coire an Lochan too (although I was looking directly into the sun). The ridge gradually eased, and before long I was crossing the outflow of the lochan, disturbing some deer as I passed.

Stream into Coire an Lochan: 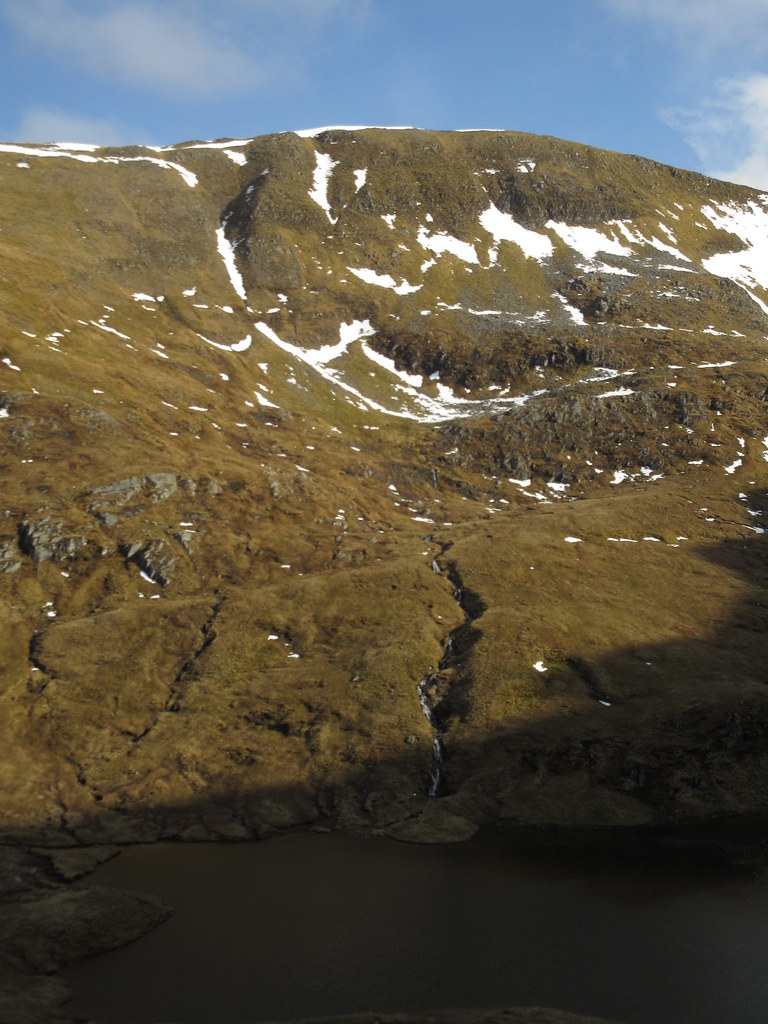 There was a short contouring ascent from here to reach a flat area on the N ridge of Sgurr an Doire Leathain, then a slightly wet but not too rough descent in the general direction of the car, picking up the stalker's path at the lowest point in the glen. 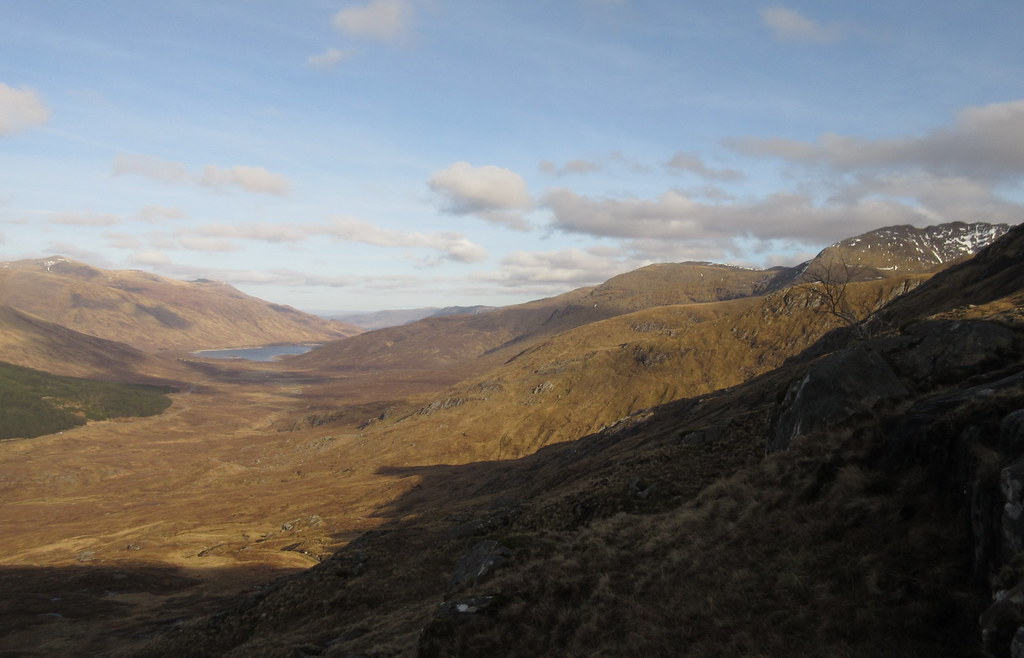 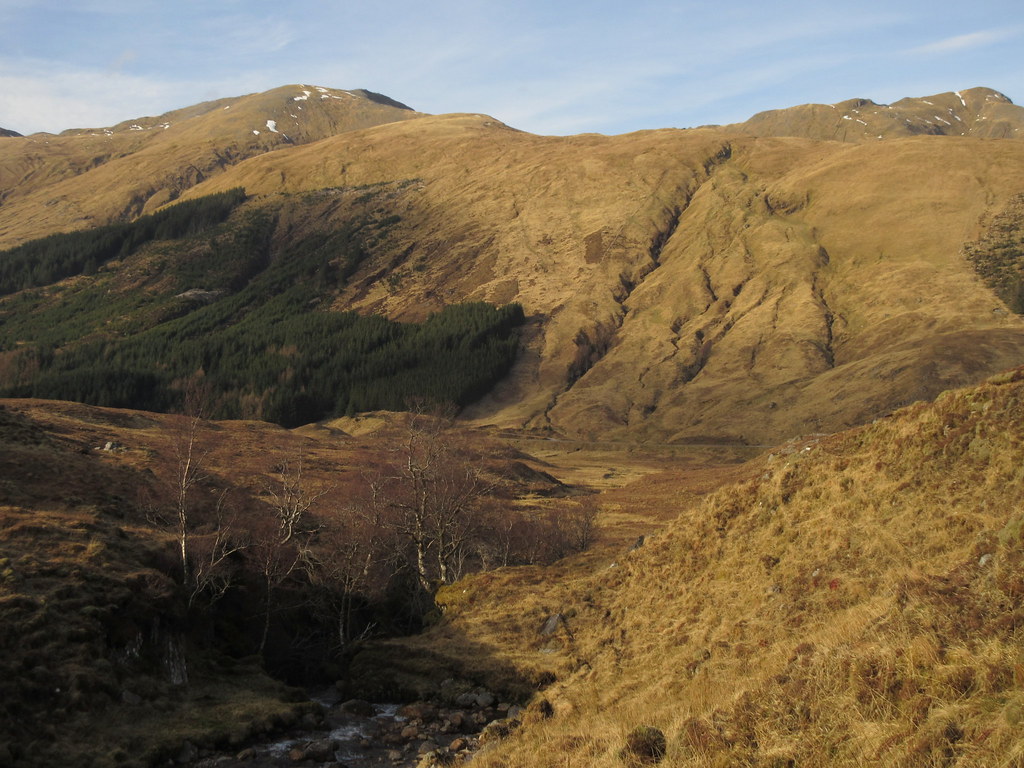 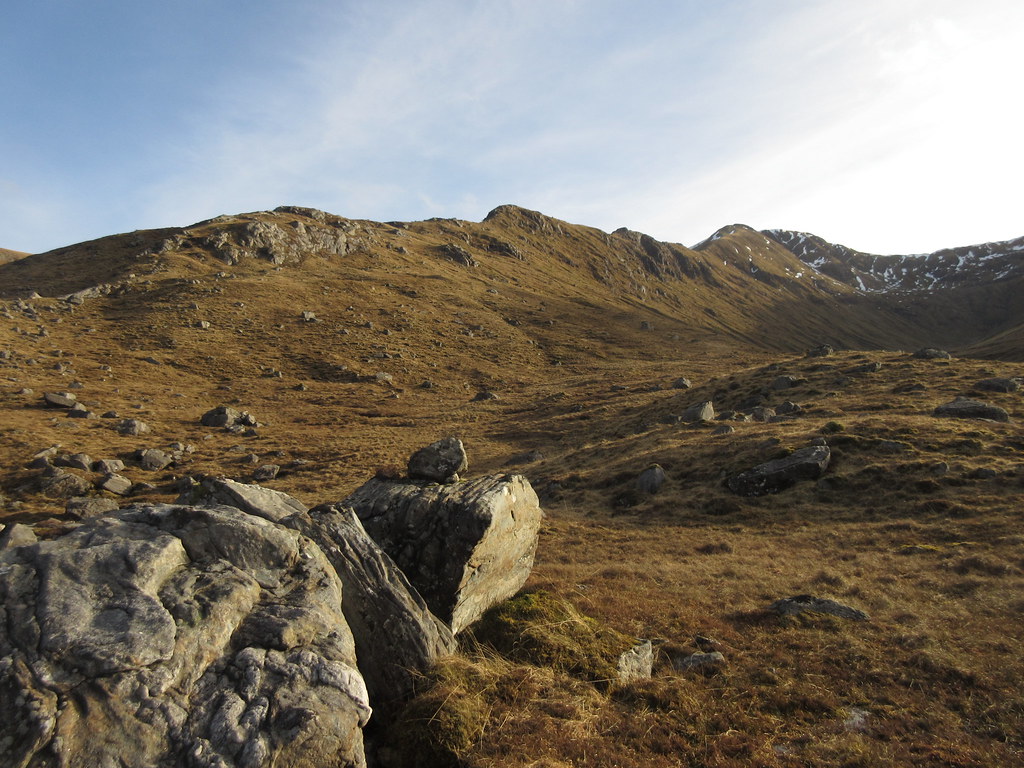 Glad to finally get back on some of these hills. They provide an easy way to get onto high, sweeping ridgelines, and I'm sure I'll be back again to do another variation of this walk, perhaps lopping off Sgurr an Lochain and adding Aonach Air Chrith. 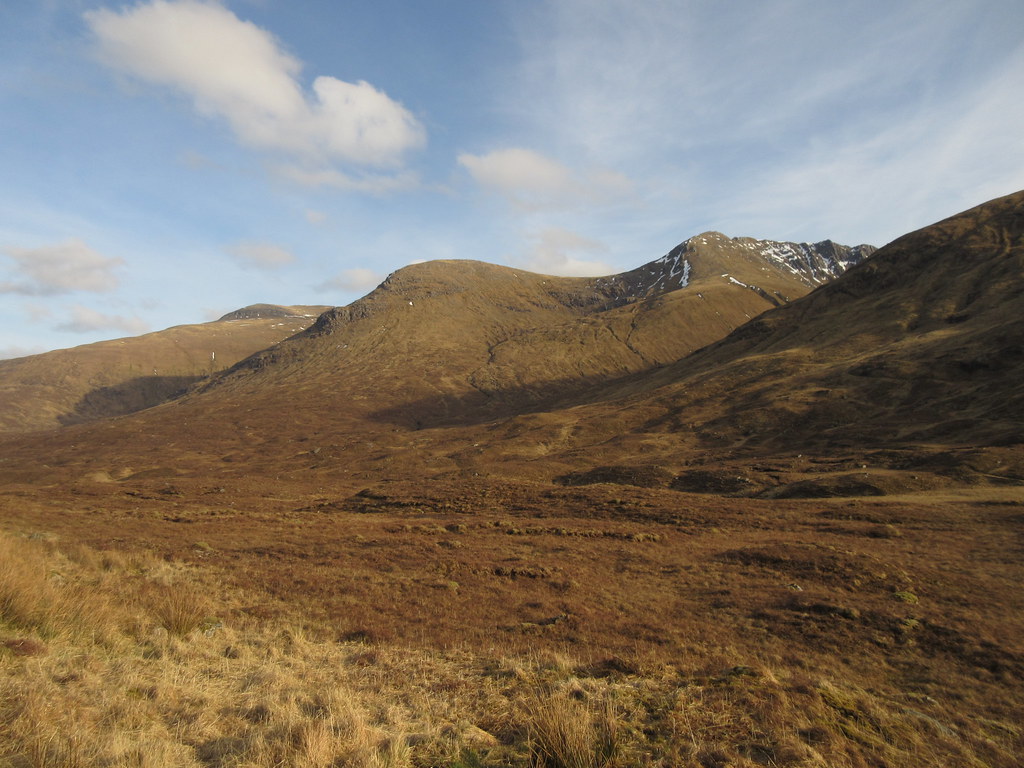 It was a lovely day... Snow gone so early this year, looks like May or June

But I heard something about winter coming back, snow showers and frost

We were lurking nearby on Sunday, too

Enjoyed your report and pictures. We have been having a lot of fun this winter on the shorter ridges in Kintail and had been wondering what the ridge leading up to Sgurr an Lochain was like so your report was really useful. I think we best try this one without the snow.