2017 saw me promise myself that I was going to start the Munro's with the dog. It was already April and I hadn't bagged one, so time was ticking on. After managing a few smaller Corbetts and Grahams last year, it was time to move onto the big hills.

Yesterday I set out for Ben Wyvis as it was supposed to be a nice day. As I was driving towards Wyvis, it looked like it was just behind Dingwall. As the satnav kept on taking me towards Garve, I was thinking where the hell am I going. I eventually ended up at the Garbat car park, which has enough space for 10-15 vehicles. There is only 1 track from the car park so we set off: 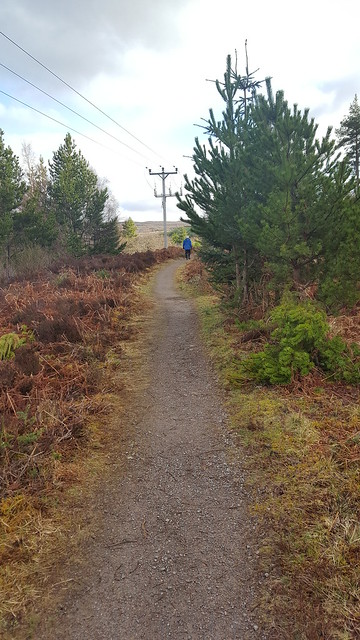 There is only one track all the way up Wvyis so it was easy to follow and get through the woodland without getting lost. Within 20 minutes, we were at the bottom of the hill, ready for the accent: 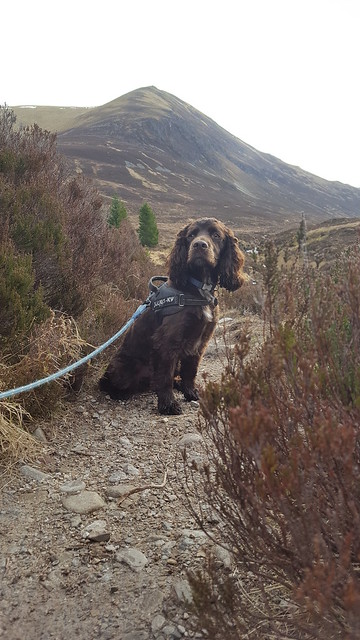 The path up is very defined and you simply cannot miss it. It zig zags up the side of the hill which is far better than walking straight up. The dog is still young and stupid and has a very poor recall, but I let him off for a chance to run around. He always checks in every 5 minutes which is good: 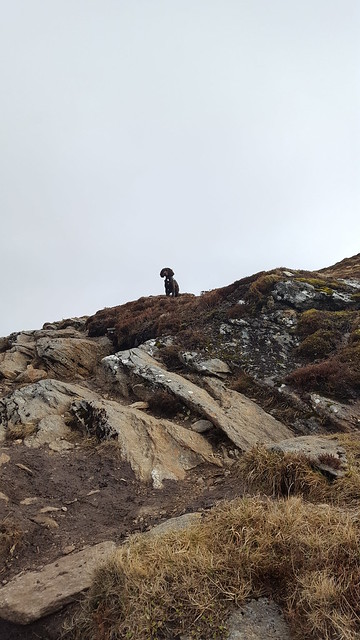 I would class myself as fit and I managed to pass about 5 different groups on the way up. Some did not look prepared for hill walking I do have to say

A quick stop for some breath and the views of Little Wyvis were simply fantastic. It does look small from it's big brother 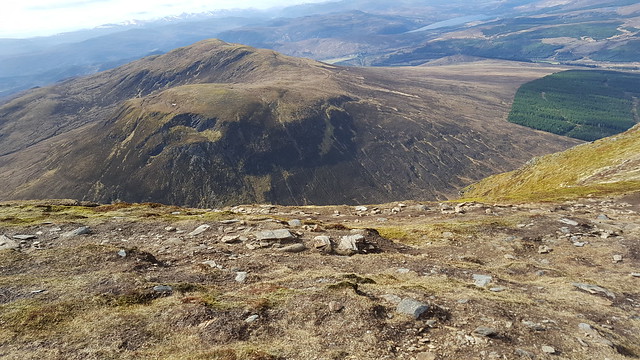 It took me bang on 1 hour 30 mins to get to "An Cabar" and with the help of someone having a cuppa in the shelter of the cairn, I got the dog back on the lead. It was getting a bit dark and misty at the top so I didn't want him disappearing. 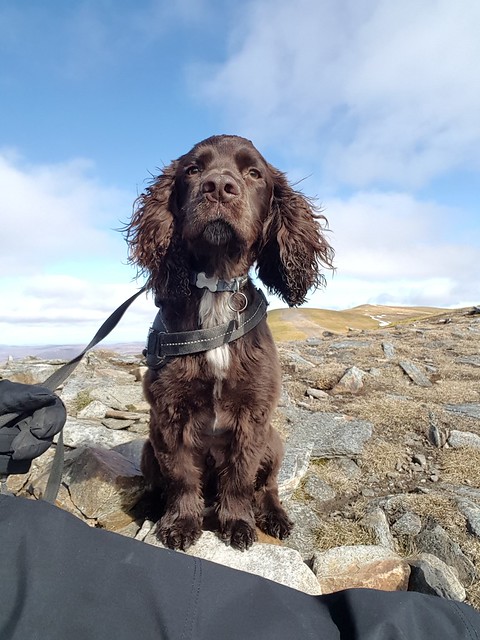 The chap I spoke with was very friendly and advised me that the summit was freezing. He hinted at me to get the gloves out and by god he was right. A few snaps of the walk to the summit: 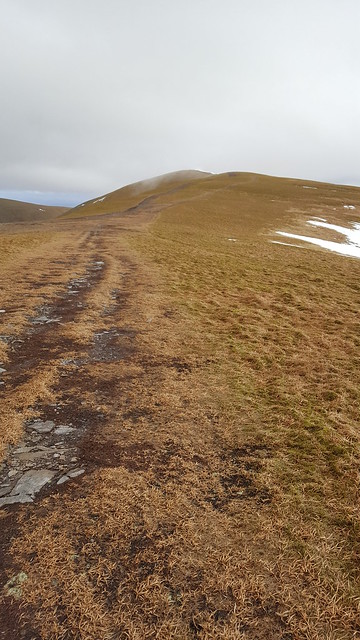 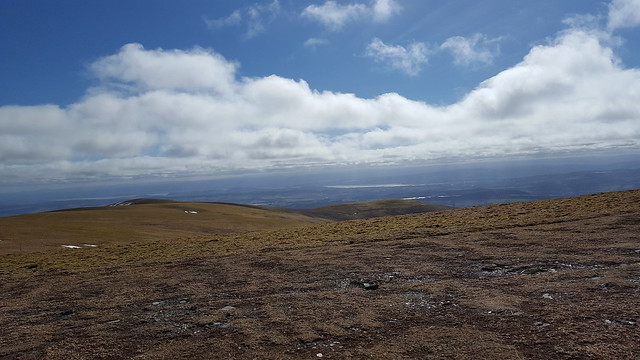 This isn't the best photo as the sky isn't bright enough but I find it funny to look at. It looks like the snow has been cropped in, but that was just a blanket patch close to the edge. 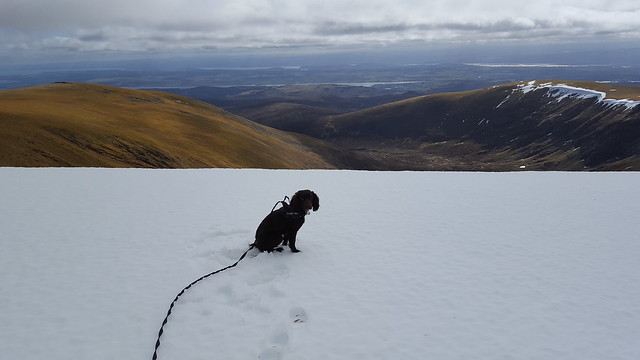 At bang on the 2 hour mark, I hit the summit Cairn. It was windy, cold and very windy so I got the photo of the dog and set off back towards An Cabar. 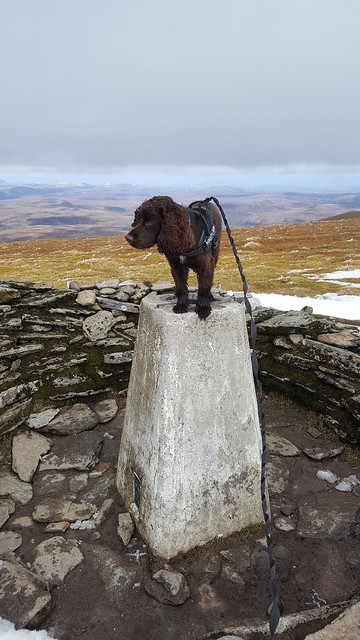 I had a quick sandwich in the shelter of An Cabar and set off back down to the car. I saw that my garmin watch was low on battery so I was hoping it wouldn't switch off and stop recording my trip. Few photos of the way down. 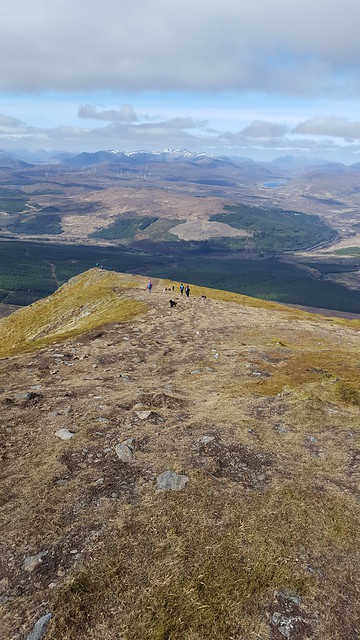 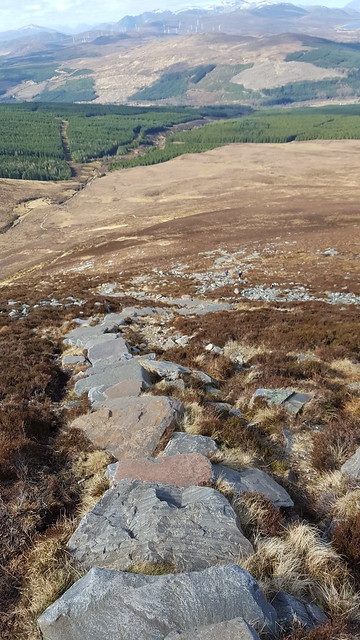 The watch showed less than 10% battery remaining, so once I passed the big rocks and hit the smoother path, I jogged down the hill, towards the forest and back to the car. Yes, crazy I know, but it was enjoyable. I did pass a few going up who looked like they were going up to sunbath, but I suppose there will always be people who don't prepare properly for hill walking.

Review of Wyvis - A little bit of a walk in to the hill, great paths all the way up with good views. There is a decieving long walk from An Cabar to the summit though

Well done to you and the pup. Lovely hill Wyvis and as you say, pretty straightforward. My trip there saw the whole plateau without views and VERY cold.

Best of luck with your bagging, stay safe out there.

What a beautiful dog. We were out walking on Monday with a working cocker - great wee dogs and never stop!