This was probably one of those days when it would have been better to be starting out rather than finishing off mid afternoon. Can’t complain though as it stayed dry and reasonably bright if a bit claggy at times.

Early start and a decent drive up the A82 – parked just off the road before the Inverskilavulin Bridge on the verge of the forest track. Up the track towards the holiday houses then took the signed detour off to the left.

Planning to walk the loop so bypassed the wee bridge. Up the hillside to the left of the Allt Coire Mhuillinn.

Just after the first cairn around the 771m point, the clag rolled in – no view from then onwards. Waited at the summit for a bit but there was no sign of it clearing.

Off down the east side of the corrie – needless to say it started to clear a little but the tops were still hidden.

Back at the car, met a couple of walkers who were just setting off. Got ready and drove down and along the A830 beside Loch Eil.

Various options for this hill included going from the Achnanellan to the east or Fassfern to the south. Had looked at the map and there was a good forest track starting at NN040784 – although the gate was open, it looked to be private ground so drove back along the A830 and parked at the first lay-by at NN047784 which only added 1.4km to the return route.

Got ready and cycled along to the start of the track then up through the trees. Hadn’t cycled for a while which showed. 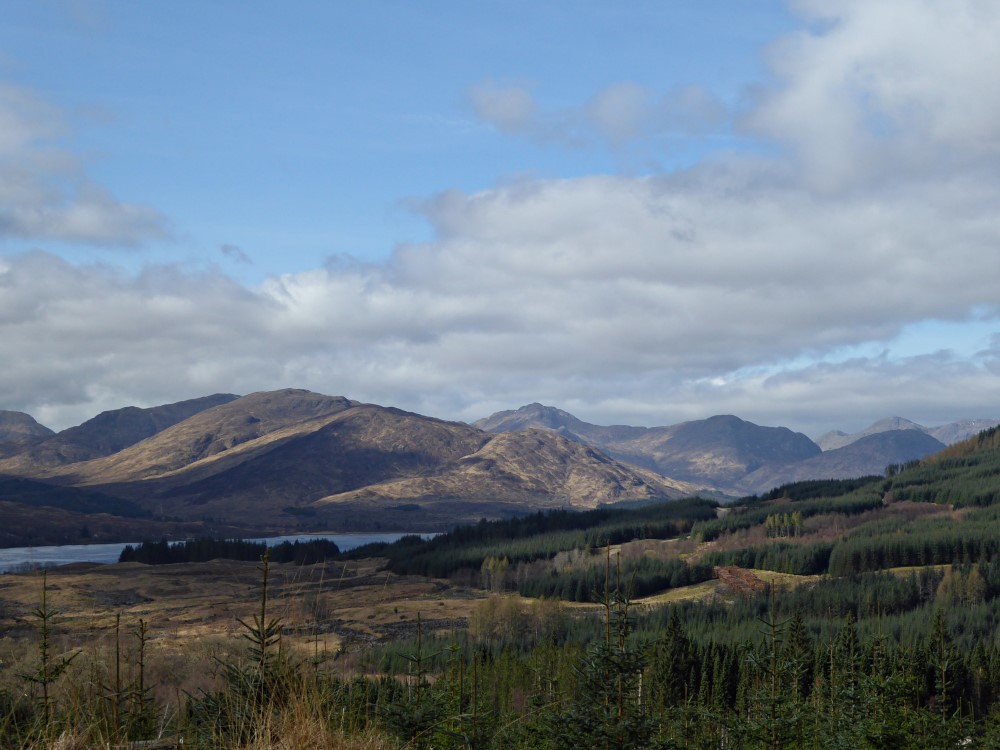 A few ups and downs – passed by the point where the Fassfern track joins in then into more open terrain. Meall a'Phubuill in sight.

Downhill section as the bothy came into view – saw two walkers ahead. Locked the bike to the fence just before the bridge over the An t-Sùileag and set off up the track on foot.

The two walkers and their dog had stopped for some food. Chatted a little – they were heading for the two Grahams which got me thinking about possibly adding on Meall Onfaidh (decided against it in the end though).

Waterfall (with some hdr)

At the end of the track, headed steeply uphill – view over to Meall Onfaidh

The Saddle (maybe, not sure)

The wind had been getting up and was finding it quite chilly. Set off back down the same way. More blue sky appearing on reaching the track.

And with a bit of hdr

Back down the track

Could see four walkers heading away from the bothy. Picked up the bike and set off down the track.

Met up with the walkers a little further along. They’d had a great night and said it had been nice and warm inside.

Much faster on the way down. Stopped for a few photos en route.

Back at the car, got changed and set off home. Warm and sunny now – would’ve been better to be setting off late today. The return journey took a lot longer – big hold up at the bottom end of Loch Lomond.

Nice one day deffo improved as it wore on

Some great pics there, always looks better with a few clouds making some hills dark and other light and it shows, especially the pic after you started cycling, stunning!

Yeah I thought the same on Sunday driving home after Beinn an Lochain, was tempted to escape the traffic jam and take on another hill around Loch Lomond to take advantage of it. I would definitely have been denied if i'd asked though!

Signs pointing to the hills always amuse me as I ponder the incidents that make someone put them there!

Collaciotach wrote:Was on Garbh Bheinn on Sunday and left house at 11.30 am .....mind it only takes me 10mins to start

Lucky you, my "closest" is Corse Hill, easily the worst hill i've done over the years...

Tempted to nip down and do Middlefield Law on Saturday though as it's only 45 mins drive to Muirkirk then half an hour to the top, the best local option i'll get!

See you are on "bagging spree" as well, RH?

We did MaP from Glen Loy and walked the whole length of the ridge. Great hill with superb views.

I wonder if you have done the two Fassfern Grahams? Some folks combine them with MaP, but even by themselves, they make for a good day. Shame only about the tree feeling around Fassfern

Have you stopped cycling to work then? Ive actually just started

Shame you didn't get views but looked a good view point when you did.

I also got held up in that traffic! Was out cycling and seen the masses of cars so we went Helensburgh/Dumbarton route, but was equally busy.

cycled up it last year

- that's the second time I've done that - my local too - cheers

BlackPanther wrote:See you are on "bagging spree" as well, RH?

- needs a few more for a spree

haven't started yet - it's a 32 mile round trip - at my age, I need good weather (and a following wind)