Playing hare and tortoise and doomed frogs on Meallach Mhor

Playing hare and tortoise and doomed frogs on Meallach Mhor


My friend Lean had bought a pair of boots and was needing a hill to try them out so I kept an eye on the weather for the only day I thought he had free (found out later that wasn't the case but it was probably as good a day for weather as any other this week). It didn't look too bad down Kingussie way so I set my eye on Meallach Mhor which sits a fair distance back but is made more easily accessible by the surfaced road up Glen Tromie. I noted the WH route suggested going in by the road with the option of a slightly longer and rougher return over a ridge including the tops Clach-mheall and Croidh-la. My thinking was we'd climb the Corbett and then decide whether or not to return by the ridge, depending on how we felt once we were up there. If it was a clear day for views I had a good idea which option we'd choose. Three of us drove down to meet the fourth member of the group at Ruthven Barracks and with the benefit of his local knowledge we ended up parking at the start of the Invertromie Trail which added about a mile to the overall distance we would walk. 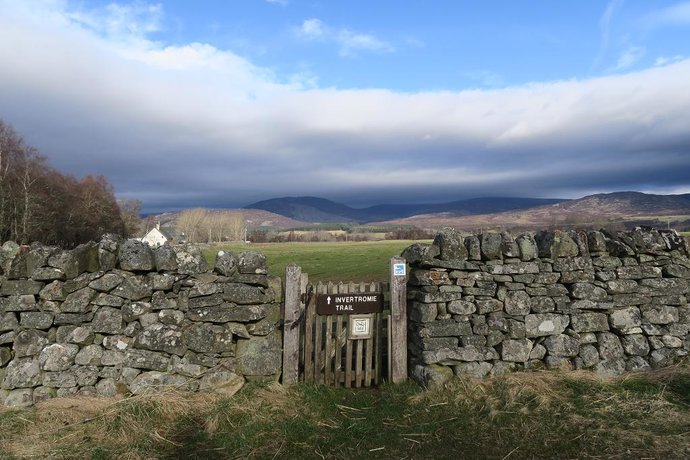 Ian and Lean both giving new boots their first outing A pleasant wander through lichen-covered trees 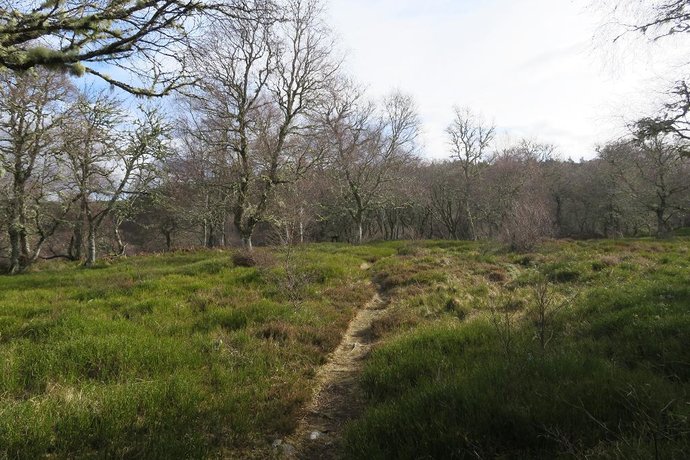 We emerged on the road a short distance west of the bridge over the River Tromie carving its way through steep sided rocks and giving the appearance of a ravine down below us. 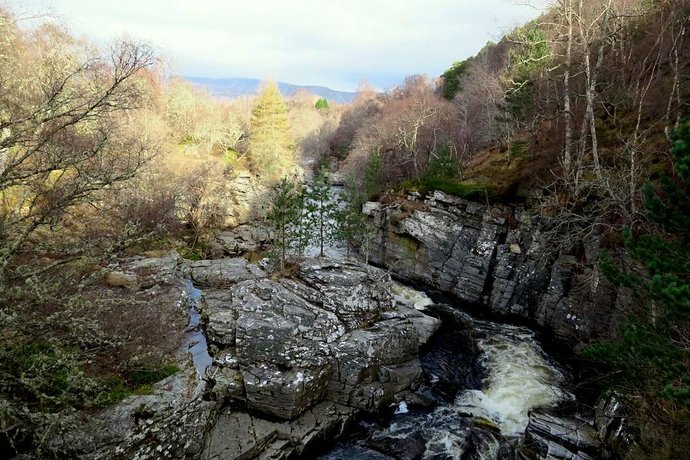 Once over the bridge we took the right turn signposted for Atholl via the Gaick Pass. As we began the long trek up the Glen Tromie road (or it would have been if we'd stuck with the WH route) we noticed a few places we could have parked but they were probably intended as passing places and leaving a car there might not have made us popular with the estate workers who were rumbling up and down at regular intervals in their heavy vehicles.

Our local member wasn't for walking up the road any further than we had to and said we should forget Walkhighlands and follow his usual route which headed straight up the nearest hill, Croidh-la, which had already come into view through the trees. In other words it was the WH route in reverse. At the end of the recently repaired dry stone dyke we turned left off the road onto a narrow overgrown path through heather which steepened as we gained height. This led to a deer fence with a high stile. The next obstacle was a fence across the ridge which we crossed via a gate.

What's Ian up to? 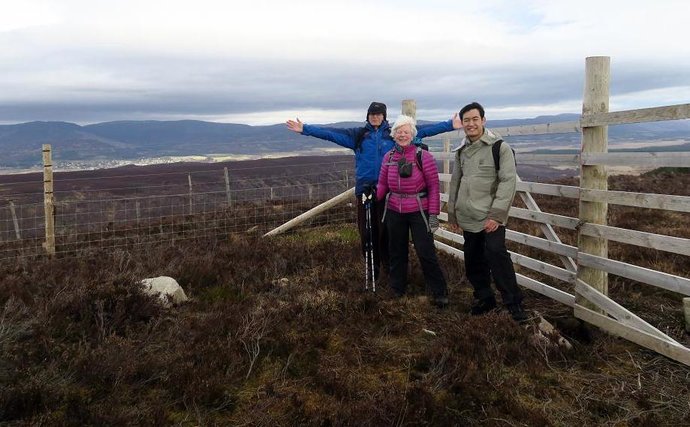 We continued on a sketchy path alongside a fence (at right angles to the one we had crossed) which led us to a trig point. 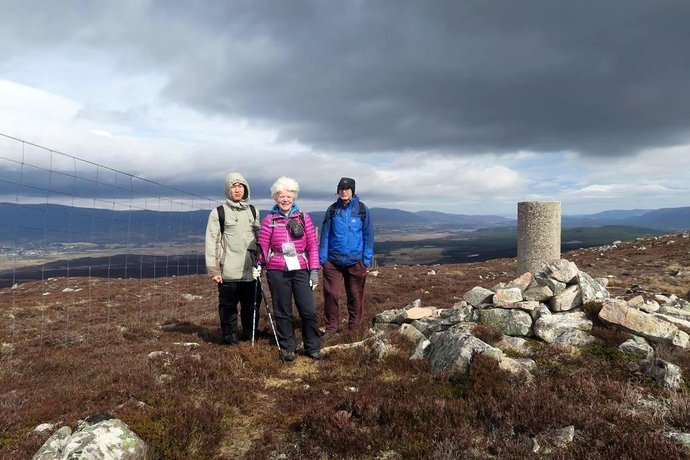 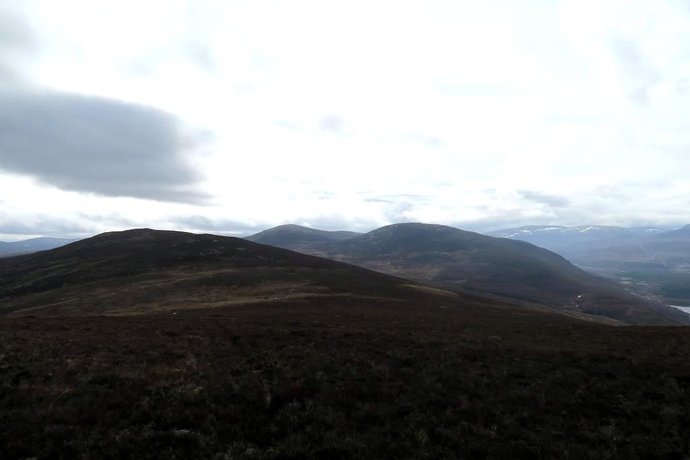 After Croidh-la the gap lengthened between Lean and me the other two, and we didn't see them again until just below the Meallach Mhor summit where they had found a spot to shelter out of the wind. For my part I was trying my best to keep up but my body was telling me rather loudly it wasn't liking walking into a strong wind over rough ground with an uphill slant!

Think this was top of Clach-mheall 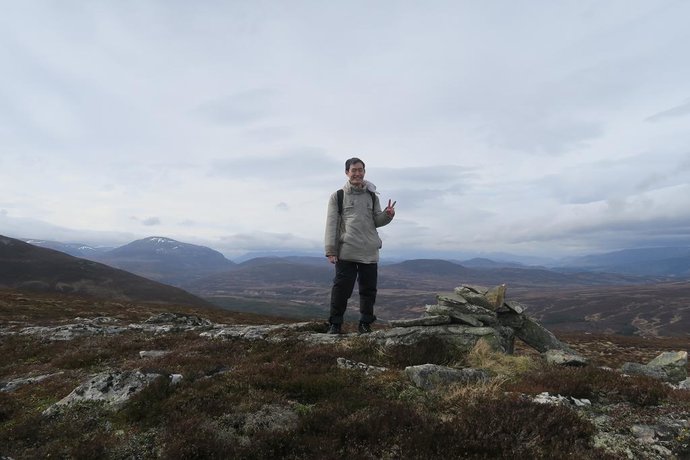 We crossed the boggy beallach between Clach-mheall and Meall Bheag before toiling up the heathery side of Meallach Mhor, which I found energy-sapping after not having done a proper hill since last November! Slightly below the summit we found the others sheltering out of the blast of the wind and had lunch with views all the way back to Kingussie. 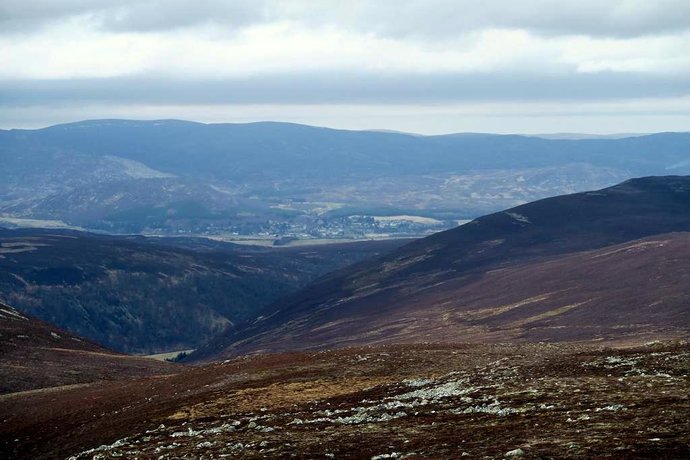 Our canine companion was living up to her breed's reputation and was on the go constantly for the duration of the walk.

A rare moment she wasn't moving Apart from that wagging tail 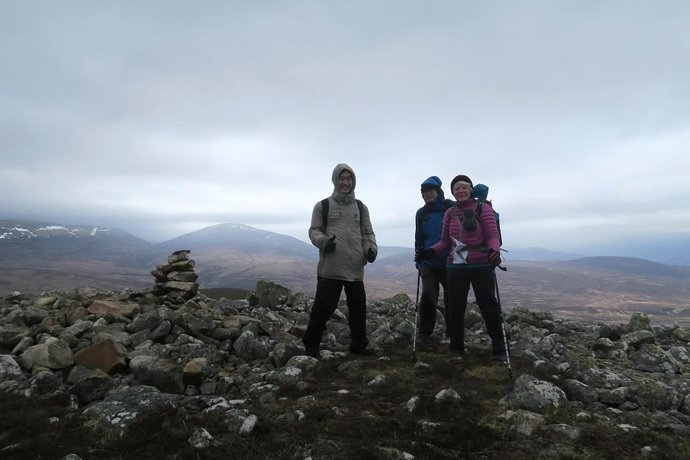 There had been some discussion about the return. Our local lad was for returning the way we had come as that's what he's done before. But I wasn't sure I had the stamina for it and would rather drop down to the road in the glen. At least on an even surface you can forget about careful placement of feet on potential ankle-twisting terrain. I suggested the guys take the high road and I'd take the low road.... but in the end it was agreed we'd come off the hill together. 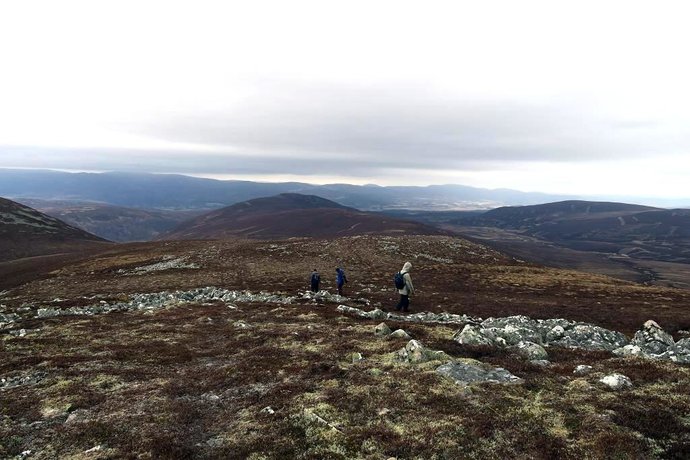 We returned to the bealach east of Meall Bheag and found a path off to the left which dropped diagonally into the glen reaching the road just before Bhran cottage. The guys stopped for another break at the top of this path but knowing I would be slower I kept right on plodding and sure enough it wasn't long before they overtook me and were soon out of sight. Lower down parts of the path were waterlogged but it was a relief not to be battling against the strong wind higher up.

Path leading down to the road in the glen Once they reached the cottage the fleeter footed fellas waited for me before we set off along the welcome even surface of the road.

Looking back to Meall Bheag and Meallach Mhor from Glen Tromie 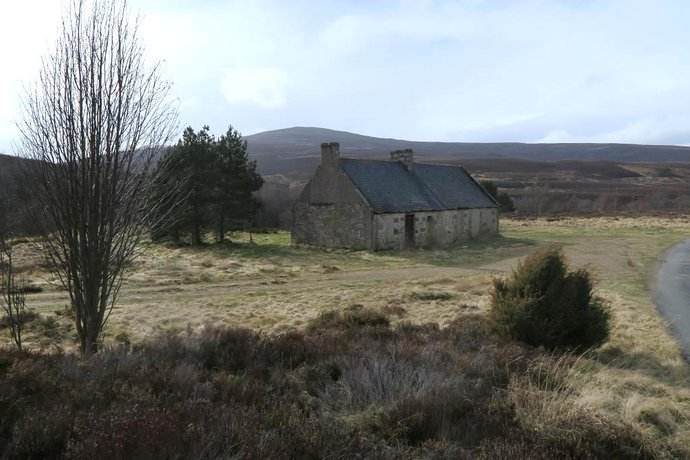 Under my feet I noticed a large number of flattened frog carcasses etched into the tarmac like transfers. They must have been caught under the massive wheels of the vehicles rumbling up and down which when it came to frogs crossing the road would certainly take no prisoners. The ones in the middle of the road would escape but those caught under the wheels were doomed. A serious health warning for all amphibians living in Glen Tromie!

On the human level I think we were all conscious this had been quite a long walk and Ian had hurt his knee running down part of the descent off Meallach Mhor and was feeling it with every step. But apart from that it was a pleasant walk alongside the river, passing Glentromie and Lynaberack Lodges as we went. At some point along the homeward stretch the others stopped for a break but I didn't feel the need of a stop and kept on plodding, assuming they would soon catch me. But they never did. After playing catch up for the entire walk I found myself sitting in the car for a good 10 minutes before the first of them appeared. And my knees were feeling fine, which was more than could be said for one of my speedier companions. It seemed that plodding at a steady pace and not taking too many stops had got the tortoise to the finishing line before the hares.

We considered going into Kingussie for a coffee but decided just to head home as Lean was going out for the evening. It was a good walk but given the strength of that wind I was thankful not to have to return by the outward route - especially when there was an easier alternative.

Nothing wrong with walking tortoise style, I've been doing that recently - slow but persistent

We did this circuit the other way round - walked into Glen Tromie first, then returned over the hills. I remember we had similar weather, with cloud hanging over the Cairngorms.

BlackPanther wrote:
We did this circuit the other way round - walked into Glen Tromie first, then returned over the hills. I remember we had similar weather, with cloud hanging over the Cairngorms.

That was the way I'd planned to do it but one of the group wanted to do both ways over the tops - until I said I was off down to the glen.

That's a fine looking spaniel you had for company, is this a conversion?

Huff_n_Puff wrote:That's a fine looking spaniel you had for company, is this a conversion?

Not ours but a great wee working cocker girl. I suspect B & B might have taken a bit of a shine to her!