It's only been a couple of months since our visit in Kintail area to climb Beinn Fhada in winter conditions. Well, "winter" turned to spring very quickly and the first weekend of April brought warm weather with sunny spells, snow has melted at record speed. I was hoping for another new Munro, but a new Corbett suggested by Kevin sounded just as lovely, especially that it would mean returning to this beautiful area on a good day.
We were always unlucky with Fhada, never saw any views from it

). This Corbett is an awkward hill from logistic point of view. The distance a bit too long for winter, unless you're prepared to walk in-out in the dark, but far too easy for a long summer day (when we usually waste hours to haul ourselves up some BHLs in the east). In autumn access might be restricted due to stalking, so the best time to climb this hill is spring.
Sometimes, Sgurr Gaorsaic is added to the big round of Sgurr nan Ceathreamhnan, but the Corbett is nice enough to deserve a separate walk, especially if one is walking over Bealach an Sgairne, the Gates of Kintail. Loch a' Bhealaich is a tranquil spot, great for wild camping. And views from Sgurr Gaorsaic, albeit restricted by the surrounding higher hills, are surprisingly good.
Most of the walk is on an obvious path. The final climb of 400m is pathless and a bit boggy, but by my standards, it's an easy route and we didn't really feel the 1200m of overall ascent.

Track_SGURR GAORSAIC 02-04-17.gpx Open full screen  NB: Walkhighlands is not responsible for the accuracy of gpx files in users posts
We left Morvich at about 9am, there was some cloud lingering about, but the forecast said, it would all burn off and give way to sunny spells The initial part of this route is exactly the same as for Beinn Fhada or A'Ghlas Bheinn, on an excellent path to the top of the bealach. Last time we were here, we encountered motorbikers roaring their way past us (

) but thank heavens, today was quiet. We overtook a couple walking with a doggie, apart from them we didn't see anybody else. Maybe all other walkers were already on the summit of Beinn Fhada

but we didn't hurry.
Towards the bealach:

Isn't the landscape of this particular corner of Kintail simply amazing? We stopped for a short break by the waterfall of Allt a Choire Chaoil. The path leading to the high pass:

Maybe AE this year... At some point, we will return to Beinn Fhada to explore the whole length of the ridge.

Having reached the top of Bealach an Sgairne, we took another break, just for photos. The day was shaping up nicely, with sun coming out and cloud dispersing... maybe we could have planned something bigger... better... but who cares. I'm not overambitious. Corbetts and Grahams have their charms, too.
It was from the top of the bealach, we first saw our target mountain. Sgurr Gaorsaic looked inviting:

Mullach Fraoch-choire and its infamous rocky ridge. I enjoyed scrambling over it a few years back... Worth returning to for more fun and games

From Bealach an Sgairne, it's over 100m of descent on the path (which has to be re-ascended again on the way back) before reaching the shore of Loch a' Bhealaich. Once on flat ground, the path became boggy, the usual Scottish charm We stopped again by the loch. It's such a quiet, tranquil spot. With the air completely still and the sun shining, it felt like we were in a very special place. Kevin has wild camped in this area once... It hasn't changed that much in 25 years...
Looking back to Bealach na Sgairne:

A couple of panoramas taken from the loch shore. Back to the bealach and A'Ghlas Bheinn:

"Our" hill across the loch:

Checking the depth of the loch, just in case We left the shore eventually and continued on the path, which leads to the Alltbeithe Youth Hostel and then Glen Affric. Of course, today we didn't intend to walk that far.

WH description suggests ascending along a line of fence posts - they can easily be spotted from below. But before we made the final push of 400m, we decided to take a lunch break.
Gazing up, a steep slope to tackle!

We found a good rock to sit on, just above the path, Kevin grabbed his sandwich box

A hungry man means a grumpy man. My mum used to say: always keep your male half well fed Stuffed with sandwiches, we pushed on. The slope is not drastically steep, just annoyingly wet, but maybe it's still the effect of melting snow. The first 100m of ascent were not too bad, and views opening up behind us - simply stunning:

The ground gets steeper as height is gained, but walking is relatively pleasant on short grass and moss, that is if you manage to find a dry line of ascent: The higher, the better, views west to Beinn Fhada:

The ground is quite steep almost all the way tot he summit, which is a rather flat area with lots of scattered rocks. Kevin was up first and started snapping photos again... Ahhh men and their toys

As we crossed the flat summit area to reach the cairn (which is situated at the opposite end), we had the first good glimpse at "The Munster" Sgurr nan Ceathreamhnan. It's the last Munro in Kintail-Affric we haven't climbed yet, together with its sidekick Mullach nan Dheiragain. We will be attempting these two from Affric side, as we live only a short drive away from Glen Affric and we can start the day early. And we will be using bikes to speed it up. It was actually planned last year, but you know how it is with plans... You have a list, then you end up doing something else

Back to Sgurr Gaorsaic, we were pleasantly surprised by the sheer quality of views. Yes, Sgurr nan Ceathreamhnan blocks the eastern sky and Fhada-A Ghlas Bheinn ridge obscures views to the west, but even so, we didn't complain. Once again, a sidekick Corbett proved worth the walk

A Ghlas Bheinn - the Munro of many false summits...

Ciste Dhubh from the less popular side:

Zoomed part of the ridge:

What a lovely place to spend half an hour, even if the air was still chilly. I was reluctant to pack up and go, but one has to get back home before the day ends

On the way down we took a slightly different line of descent, to avoid the worst of the wet ground near the fence posts. We retraced our steps back to Loch a' Bhealaich and then climbed back to the bealach. The rest of it was history

Basking in sunshine on the return walk to Morvich: One more break by the waterfall... We were well ahead of time so decided to take it easy on the way back and strolled to the car at a lazy pace, with big smiles glued to our faces.

What a day!
..........................
I must say, Sgurr Gaorsaic was much better than we expected! Hopefully, the two bigger neighbours will be visited soon to end our Kintail-Affric tally, but it doesn't mean we won't be returning to this area in the future... Expect to hear more meowing from Kintail!

Nice one BP. Some good views there. Ive still to do this one. Was thinking of possibly doing it from the Glen Affric side

I always like the fact that many of your reports are for hills I have never heard of...

...though I have presumably looked down on it as once of the best days we've ever had was on Sgurr nan Ceathreamhnan...


Thanks for showing us somewhere different.

mountain thyme wrote:Nice one BP. Some good views there. Ive still to do this one. Was thinking of possibly doing it from the Glen Affric side

it is a nice one indeed, much better than it looks on the map

If you plan to do it from Glen Affric side you should take a bike - definitely it will speed things up! I have a soft spot for Affric area, so we even did An Socach as a separate trip - just to have a good excuse to lurk around Loch Affric once again

Mal Grey wrote:I always like the fact that many of your reports are for hills I have never heard of...

...though I have presumably looked down on it as once of the best days we've ever had was on Sgurr nan Ceathreamhnan...

Thanks for showing us somewhere different.

Ahh all my pleasure

This is an overlooked sidekick. Funny, all who have done SnC round must have looked down at it, thinking it was just an outlying top

Husband was tempted to go and pose on that wee bump on the way back, and for some reason, that's the only pic that came out. Suspect it was pre-digital. I think you picked the best way....unless you want to add stuff. But even if rockhopper wants to add stuff, the most obvious is Sgurr an Airgid on the way back from this way.

Thanks BP. You've inspired quite a few of the walks Moira and I have done and I've a feeling this one will be added to that list!

Only been up this one once before, but it probably has the best views you can get of Beinn Fada (maybe A' Ghlas Bheinn has better? I can't remember). I also really like the walk-in through the pass and down to the lochan. Nice photos

Re: adding stuff. I'm guilty of that sin, too. I want to do Carn Dearg and Sgor Gaibhre from Rannoch Mor side - to add Beinn Pharlagain. Another walk - adding Graham Meall a'Mhuic to Glen Lyon Corbetts (exactly what Rockhopper did!).
But sometimes it's nice just to do the easier walk and enjoy it at slower pace... Or is it it just a good excuse for being lazy?

I remember A-glas Bheinn has better views to Hunters Ridge. But we climbed AGB in winter conditions, on a good crispy day, so maybe I'm biased...
So-Alpine: 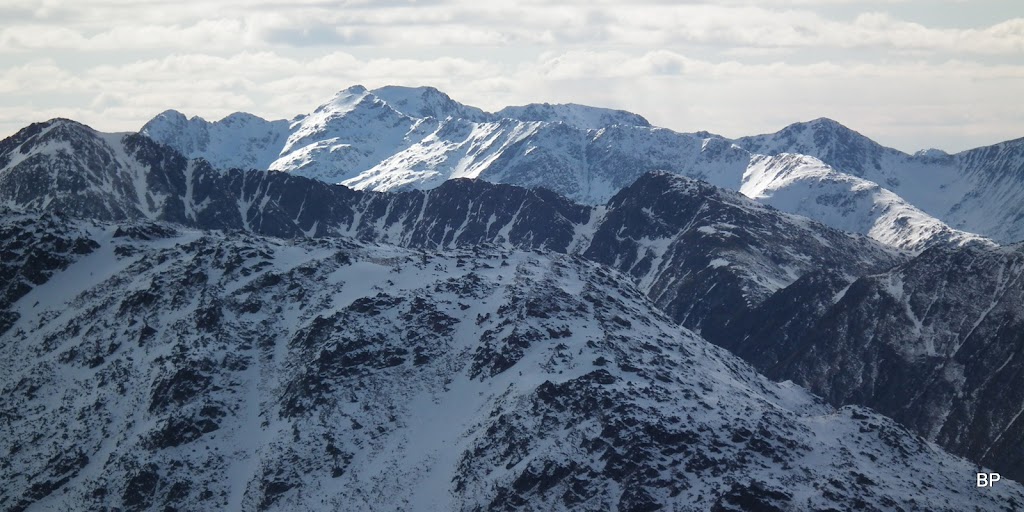 I just found this and have one more day in Morvich.... now praying for good weather tomorrow.