The Cromdale Hills - the lazy way & reindeer too !

The Cromdale Hills - the lazy way & reindeer too !


Harvey is on holiday at Aviemore just now, so just GordonC & me on this trip.
Probably a good thing as the ewes are lambing just now and the shepherds are understandably nervous about strange dogs - even on the lead - wandering through the sheep around the home fields.
Suffering from phone buying syndrome just now - 2 new ones returned, so back to the old S3 with the screen freeze. Also forgot the second battery as I was getting used to the 2.8Ah one on the S5 which lasts 2 days with Wi-fi & GPS switched on all the time. But Black screen syndrome on one and a power socket that wouldn't connect on t'other has me toughing it out with lots of master resets etc to get a few pics on the old S3.
Also unable to send my "I'm alive" texts to my nearest & dearest from the tops, as my groups have been deleted .
Battery died on CaGC so had to rely on GordonC's hardy wee Olympus.

None-the-less, parked up beside the gate oppposite Milton and headed off up the track to Carlag. The bothy in the coire below Carlag

At the track terminus an ATV track headed up through the soft ground to near the top of Carlag. The track contoured round the south side of this subsidiary summit and led us up the the top of Creagan a' Chaise. The walk across to the jubilee cairn on Creagan a' Chaise

Mountain hares were scudding around trying to be invisible, with their -still white- coats making them stand out like moving snowballs ! One even returned down the path to check us out before realising that we weren't what it thought we were and louped away uphill.
At the top, we had a great view of Grantown to the north, Ben Rinnes to the east and the high Cairngorms to the west with the distinctive warty tors of Ben Avon to the SW. The cloud level was quite high and broken so that the sun shone through in places, but the stiff NW breeze made it quite chilly, so we cooried doon behind the Jubilee cairn.
Looking past the jubilee cairn & trig, I was glad I hadn't followed Plan A & attacked this hill from the A939, as there appeared to be a fair bit o chough ground between the road and the top.
I walked round the cairn and found the commemorative plaque set in an alcove in the cairn, so I leaned in to take a photo. After a few minutes fiddling around to get my phone to take a picture, I realised that this muckle cairn was vibrating in the wind. Seemed to me to be surprising, bearing in mind the amount of quartzite rock stacked up to make this huge cairn to celebrate Queen Victoria's Jubilee. GordonC could feel it too - so it wasn't just my imagination. Queen Vic's plaque on the jubilee cairn of Creagan a' Chaise

It was too cold to hang around so we headed down. About half way down we passed a mature couple ascending the track.
We gave the customary hail-fellow-well met greeting and passed on, thinking they were just out to view the wildlife as it was getting late-ish.
Back at the car we were surprised there was no other car there, belonging to this couple - strange.
However, we were needing our piece, so drove along to the parking area near the bridge below our next hill, Carn a' Ghillie Chearr by Mains o Inverourie.

We parked up beside a green people carrier and watched an estate worker chappin staples into a newly strung fence at the side of the track. GordonC sidled over and had a chat. Seemed that the route we'd planned up through Mains of Inverourie was not the preferred way. He directed us to the track by Knock Farm ( disused), which was a wee bit longer, but no big deal.
Just before Knock, we spotted a tree that had been blown over, but as there appeared to be some roots still in action, the upside branches of the horizontal pine tree were still growning vigorously, which I thought was quite impressive. The squinty tree fighting back

I always feel sad to see abandoned buildings that were erected many years ago with a lot of sweat and manual labour, being left derelict as Knock has been. It even had a wee mill driven from the head pond above the farm, but the roof had caved in and the rest of the steadings looked as if they were about to. There was a brand new shiny "granny" on the lum of the house, but it was now abandoned, even after having the windows double glazed. Renovated, it would have made a super family holiday home. Who knows, maybe post Brexit the UK govt will do what the NZ govt did and wean the agricultural industry off subsidies, which may stimulate this type of diversification! ( I'll probably get shot to pieces over this suggestion ) The track through Knock farm

Near the pond above the farm, the sheep were being kept in about for lambing by being fed neeps.

Crossed the ford above Knock easily as the water level was really low. The ford on the track up CaGC

On the way up, we kept crooning the Corries version of the song - Haughs o Cromdale - "the Gordons fought wi sword & lance, the Frasers they made the heids tae dance, upon the Haughs o Cromdale".
Well, we had a couple o Gordons back tae view the Haughs o Cromdale !
The track wiggled about the hillside until it terminated just below the bealach below Carn Eachie. Just near the track terminus we came across 5 white Reindeer. I hurriedly fiddled with the camera to get a shot of them before they galloped off. First sighting of the reindeer

Needn't have bothered - at the the next zig in the track they wandered over, presumably to see if we had any food. The reindeer came a bit closer !

They seemed to be used to humans and were probably being fed through the winter. They followed us for a bit then returned to grazing. What a fantastic surprise. Didn't know there were reindeer outside the northern corries of Cainrgorm & the N end of the Larig Gru !
After the track terminus we followed faint ATV tracks bearing right up towards the top of Carn Eachie. GordonC was a good bit in front at this point and when I stopped for we wee rest I was quite surprised to turn around and find a bigger herd of 18 reindeer following me up towards the top. a bigger herd of reindeer closing in.

They were a wee bit to the north of our track but I toiled up after GordonC over the squelchy ground to the top. From the top of Carn Eachie there was a bit more squelch over to Tom an t-Sealgair where the ground firmed and a lovely ATV track took us the rest of the way easily to Carn a' Ghillie Chearr.
There was no cover at the top other than the trig Pt, so we didnae tarry, as the breeze was still chilling.
The reindeer had followed us to the top and started crowding in to chew my gloves, hillbag & trousers, so we left them and headed down. 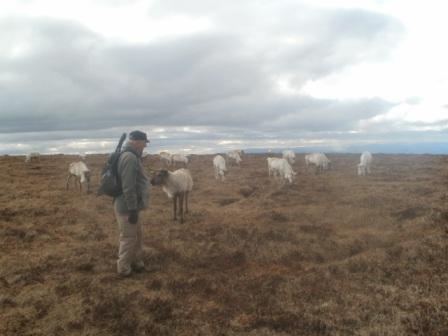 We had no food, so they lost interest in us and wandered off in another direction to graze. They seemed fairly docile. On the way back down, we found a better track on the crest of the SW ridge up Carn Eachie, that the reindeer had been using on their parallel course to me, earlier, on the way up ! Reindeer are nae stupid - just me !
We followed this one on the way down

We found the main prepared track and headed down, overtaking the couple we'd met ascending Creagan a' Chaise, earlier in the day. We started chatting and soon the penny dropped. The green people carrier was theirs. They'd walked along the road from Mains o Inverourie to Milton, then ascended Creagan a' Chaise, walked along the ridge towards Carn a Ghille Chearr. At the bealach below Carn Eachie, they realised they didn't have enough time to do it and get down in time, so they came down this track back to their car - hardy cheils - eh !
It looks a long way along that ridge, which is why we took the lazy people's route and drove along the road between the two hills ! Short and easy is our motto !
We had a braw view of the Tomintoul distillery and if the wind had been in the other direction, I'm sure we could've sniffed the fumes drifting up to intoxicate us even more. Near the bottom of the track we saw a dead ewe, which looked like a lambing death. The couple told us that there was also a dead lamb nearby. Sad loss .......
An uneventfull drive home, just in time to bit my wife farewell as she headed off for her Grannies baby-sitting shift tomorrow.
Thought I'd celebrate this fantastic day with my buddy GordonC by having a Speyside dram of The Glenlivet, which is going down really nicely ! In fact it going down so quickly, I think I'll have another - Slainte !

That does look like you had a braw time. I was singing haughs of cromdale afore you even mentioned it

I think the reindeer are the other (male) half of the Cairngorm herd. The distance between the herds makes for effective contraception. Always beautiful animals though, all the more endeering for their tameness

basscadet wrote:That does look like you had a braw time. I was singing haughs of cromdale afore you even mentioned it

I think the reindeer are the other (male) half of the Cairngorm herd. The distance between the herds makes for effective contraception. Always beautiful animals though, all the more endeering for their tameness

Thanks for educating me basscadet. Knew there must be some plan there, just couldn't think of it !
Cheers Gordon

Would love a close encounter with the reindeer but I remember reading a newspaper account of a lone walker being roughed up by a persistent male reindeer. He was probably looking for food in her rucksack but knocked her over several times and the ordeal went on for a couple of hours until she managed to get away. That gave me pause for thought about going to the Cromdales.