so the day had arrived,after many weeks of thinking of nothing but the challenge
and a few restless nights sleep we arrived in fort william with a few hours
to spare and stopped off in the car park at the water to relax while we could. thomas and our trusty steed-the transit!

the water at fort william

myself,thomas and our driver steven all shared a good laugh at the prospect of
having no sleep and the fact that within 24hrs we would be in wales,it all
seemed very surreal.
we had decided to go with the traditional challenge and touch the water in
fort william as our start point and then finish by touching the water in
Carnerfaron(wales).we touched the water at just after 4 o'clock and quickly
headed round to the visitor centre at ben nevis where we took a couple of
photos to upload to facebook so that our friends and sponsors could track our
progress. the start of nevis

we started with a gentle run for the first 20 mins trying to get as good a start
as possible and with the weather being very warm it soon forced us to just walk
at a good pace as we started the ascent.i think the excitement of the event really
pushed us on and we made the halway lochain in around 45 mins,which was already ahead
of our scheduled time and this only further spurred us on.i arrived at the summit in
1hr 55mins with thomas just behind me by about ten mins.we stopped for photos and chatted
to about ten people who were also taking on the challenge that day. we set off and managed
to run most of the way down,with myself making it back to the van in 3hrs 35mins and thomas
checking in at 3hrs 50mins,a quick change and we were away,headed for Scafell pike.
with our spirits high due to the great time we completed nevis i tried to get my head down
but never managed to get any sleep and with the prospect of our first ever night walk looming
the excitement started to build again as we neared wasdale head.after talking to some people
who had taken on the challenge just before us i knew that Scafell could be the make or break
of the whole 24hrs and that we could not afford to take the wrong path on Scafell. the start of scafell

we set off
at 2:15am and the walk on Scafell was superb,a really clear night and great weather and as we
neared where the path split i used memory map on my iphone just to make sure we were on the right
track.soon after we started to spot the cairns which were now our guide to the summit.we summited
at 4:15am and had a good laugh,a few photos . myself in good spirits on scafell summit

we then headed back down,knowing that we were making good
time 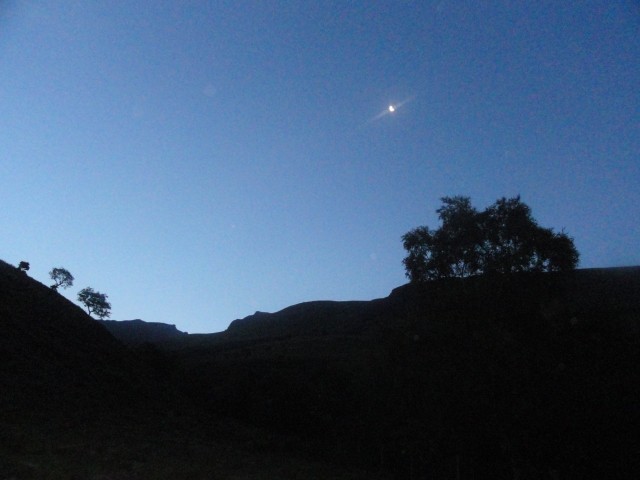 looking back to scafell during our descent

and arrived back at the van at 6:15am,again a quick change and we set off for Snowdon
myself and thomas managed a couple of hours sleep on this leg of the journey and awoke just as
we arrived in wales and knowing that we would arrive at snowdon car park around 11am were in great
spirits with the knowledge that we could afford nearly 6 hrs to complete it. the start of the pyg track at snowdon

we set off just by 11am
and with it being another beautiful day our pace was slower than normal and we got to enjoy the scenery
and stopped for many photos on the way up. the stunning view on the ascent to Snowdon

after about an hour thomas realised he had left his blackberry phone
on the side of the hill and he headed back down the way to try and find it(i used this as an opportunity to get a few pics and sunbathe for a while,lol),

the lake below snowdon

he returned 40 mins later with no phone
and not in the greatest of moods but we carried on regaurdless and summited at 1:20pm on the summit of snowdon

we had a look around the
visitor centre and then headed back to the van,which we reached at 3:15pm-yay! the first part of the challenge
was complete and we headed to touch the water which we duly did at ten to 4 in the afternoon. touching the water in wales i couldnt resist the freezing water on my aching legs,lol

all in all a great 24hrs,we completed in a great time and the feeling when we finished was out of this world,we are all really proud of ourselves and raised over £1200 for mss scotland

oh and to point out the challenge was the 2nd sep-3rd sep,not today as the report suggests,lol

Congratulations to you both.

Glad you got excellent weather.
Give it a few days and you'll be thinking what shall I do next.

too true. the completion of this has left a void and we're now considering what to do next,i will do this again next year but i've possibly got the option of Mont Blanc with thomas or i might go for Kilimanjaro,got some pals in africa just now who are undertaking it and once they are back and i've heard all about it i'll make the final descision where i'll go next year

in the mean time i've still got 246 munro's to contend with,lol

You were very lucky with the weeather! Hope you actually went up Scafell Pike and not Scafell! I'm assuming they were just typos... Hope you didn't walk all the way to Caernarfon from Snowdon?

Would be tragic to go up the wrong hill!

Excellent report and well done for your charity, all your summit round trips are quite quick, would be proud of any of them, shame about the phone, hope it's insured

Well done guys. Did you do Scafell Pike from the Lingmell Col path or direct via Mickledore?
Dave.

I did the Three Peaks Challenge with workmates last year, we had a Chinese meal in Betws-y-coed afterwards, but were almost sleeping half-way through. Did you stop off to celebrate, or just head home?

walk aboot-we stayed at a b&b in wales that night,went out for a few drinks to celebrate,thomas went home early and myself and our driver ended up getting back to the b&b at half eight the next morning

it was certainly a good night!

you didnt touch the water?? you'll need to go back and do it again

slogger-we went from wasdale head and took the path to the left as it splits(we actually saw a group doing the challenge that took on the scramble!-mental) and followed the cairns all the way to the summit

susanmyatt-thomas was extremely lucky that some kind person lifted the phone and handed it in at the visitor centre,it certainly cheered him up

Ah, so you took the Lingmell Col path. Thats the best and the quickest and the route I took when I became the first to the top of England when the paths reopened after the Foot & Mouth outbreak.
Dave.

I don't think there is a scramble as such onto Scafell Pike - it's just rough and loose scree up to Mickledore - highly unpleasant I would think!

we couldnt believe it when we saw them heading for it,i have been up this route and i dont even think its that much quicker,certainly not at night,i'll take the left path with the cairns next year when i do this again,looking forward to it although going up to scafell pike during the night has wetted my appetite for lots more night walks which i plan to do now