A very late decision to tackle these hills was made on Tuesday night...I was making sandwiches at midnight

After the struggle I had on my last outing I wasn't sure about doing such a long day. Pieplough and I left Glasgow early doors hoping to make it for a 10am start.

The Trip up the A9 was the usual affair, slow fast slow fast slow but we eventually reached the layby that would be at the end of the walk, we had decided this would be the best place to park. 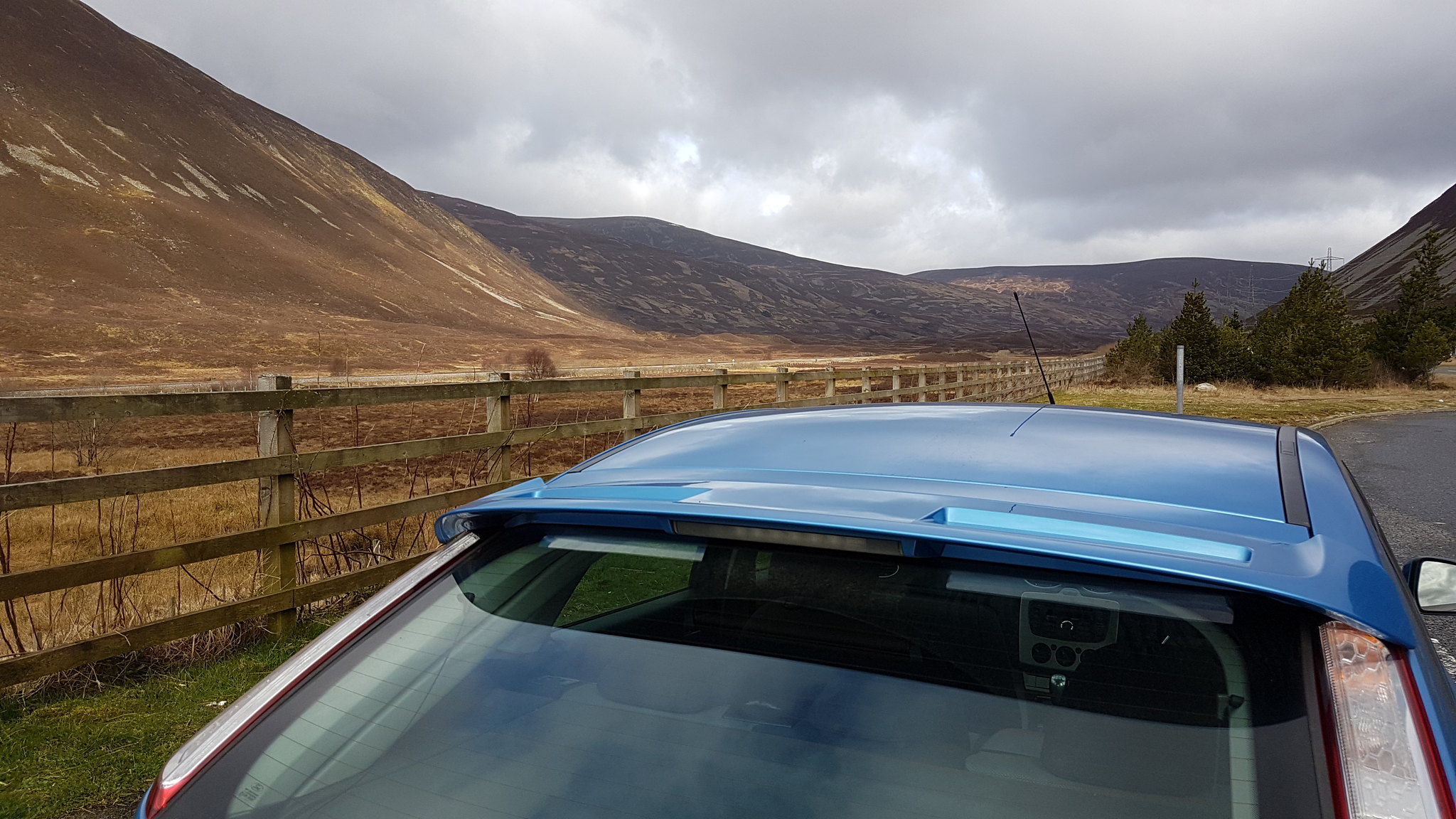 The walk along the path was fine being so close to the A9 is a little unsettling however, so many numpties on that road. 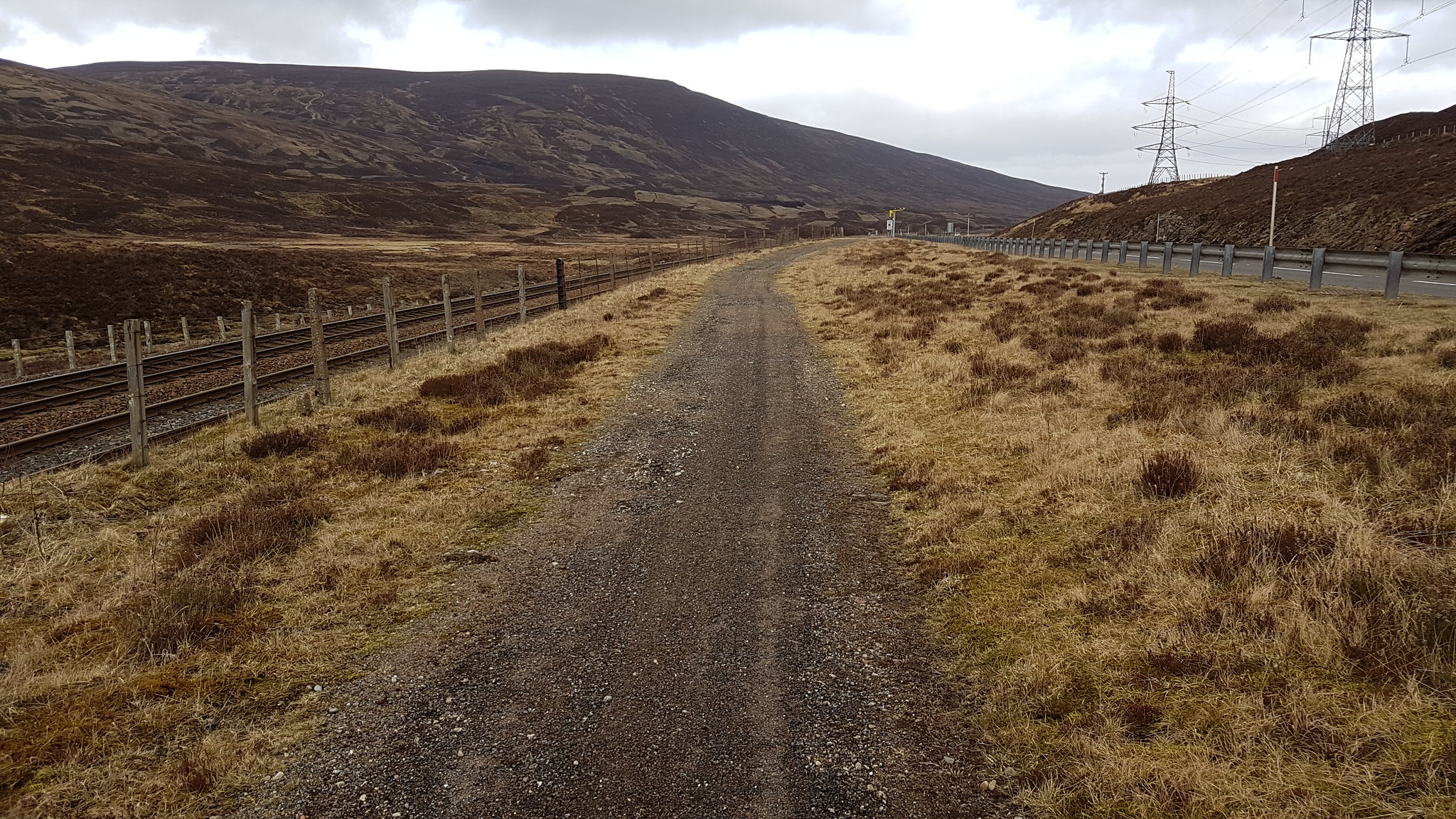 The cottages were reached in, according to the time stamp on my pictures '40 minutes' after settling off, which seems a little bit longer than it felt. I actually don't believe it. 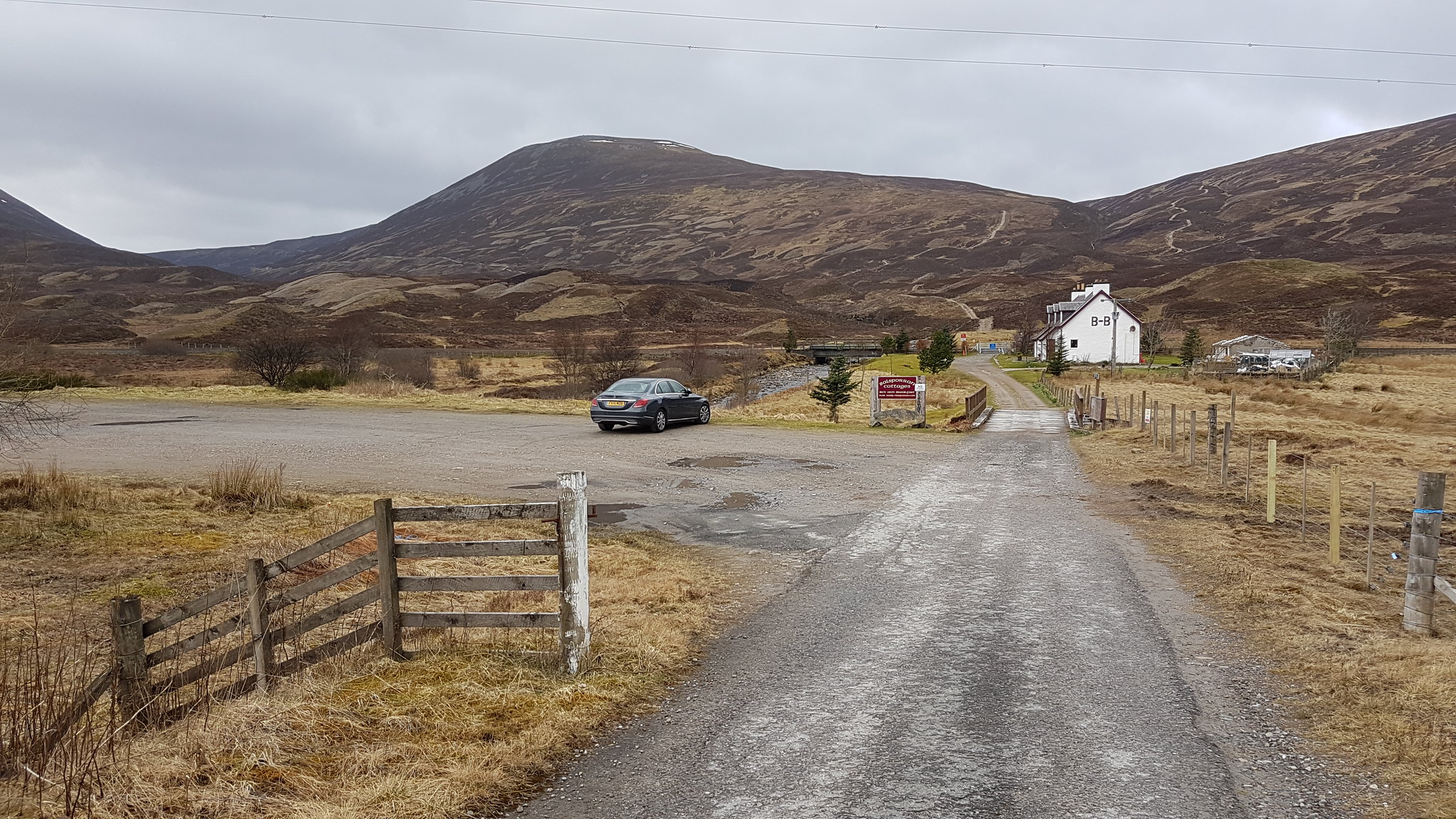 Crossing railway lines is aways odd, it's like breaking a behavioural taboo or something. 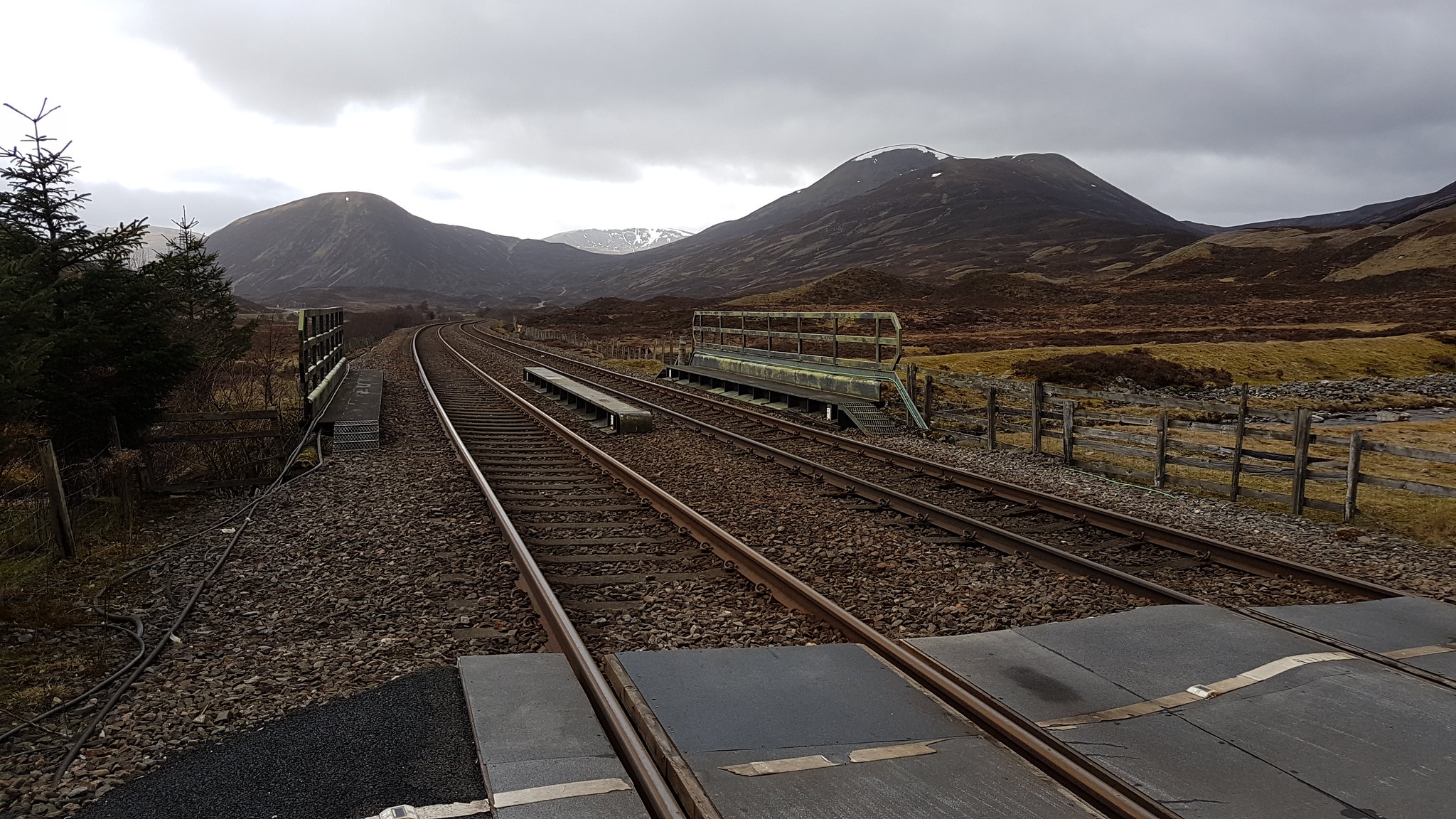 The path after the crossing is good going the first part of the walk but the first accent of the day was a shock to the system. We had elevenses before the serious grind was to start, a pee and a piece. I managed to eat so proud of myself 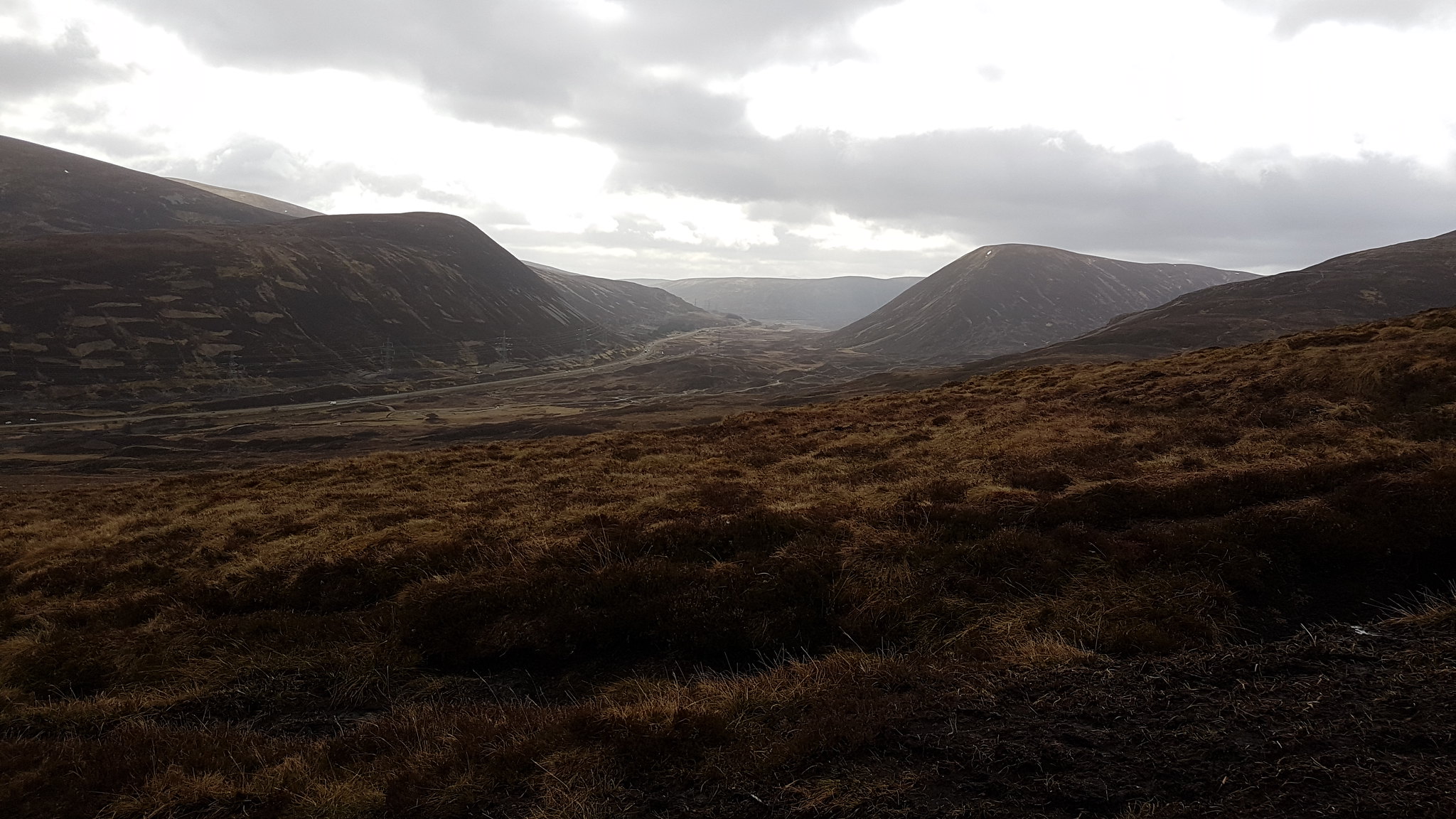 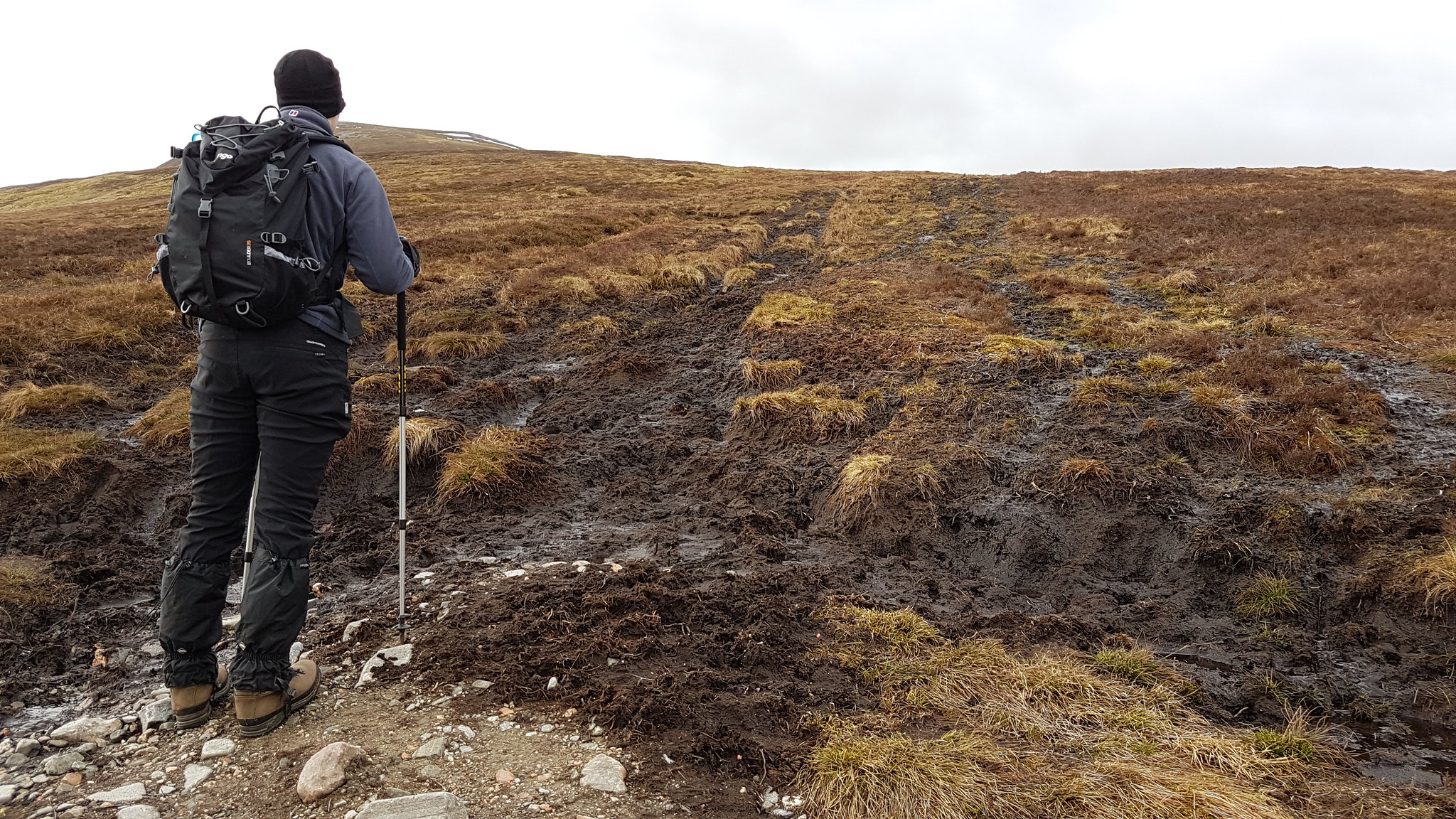 We grinded this part of the walk out and made it to the old cairns, the wind at this point was strong and cold so the jackets went on. We walked side by side heads down into the wind not speaking, there was no point.
The large flat approach to the summit was very nice to walk on, this would become the theme for the day. 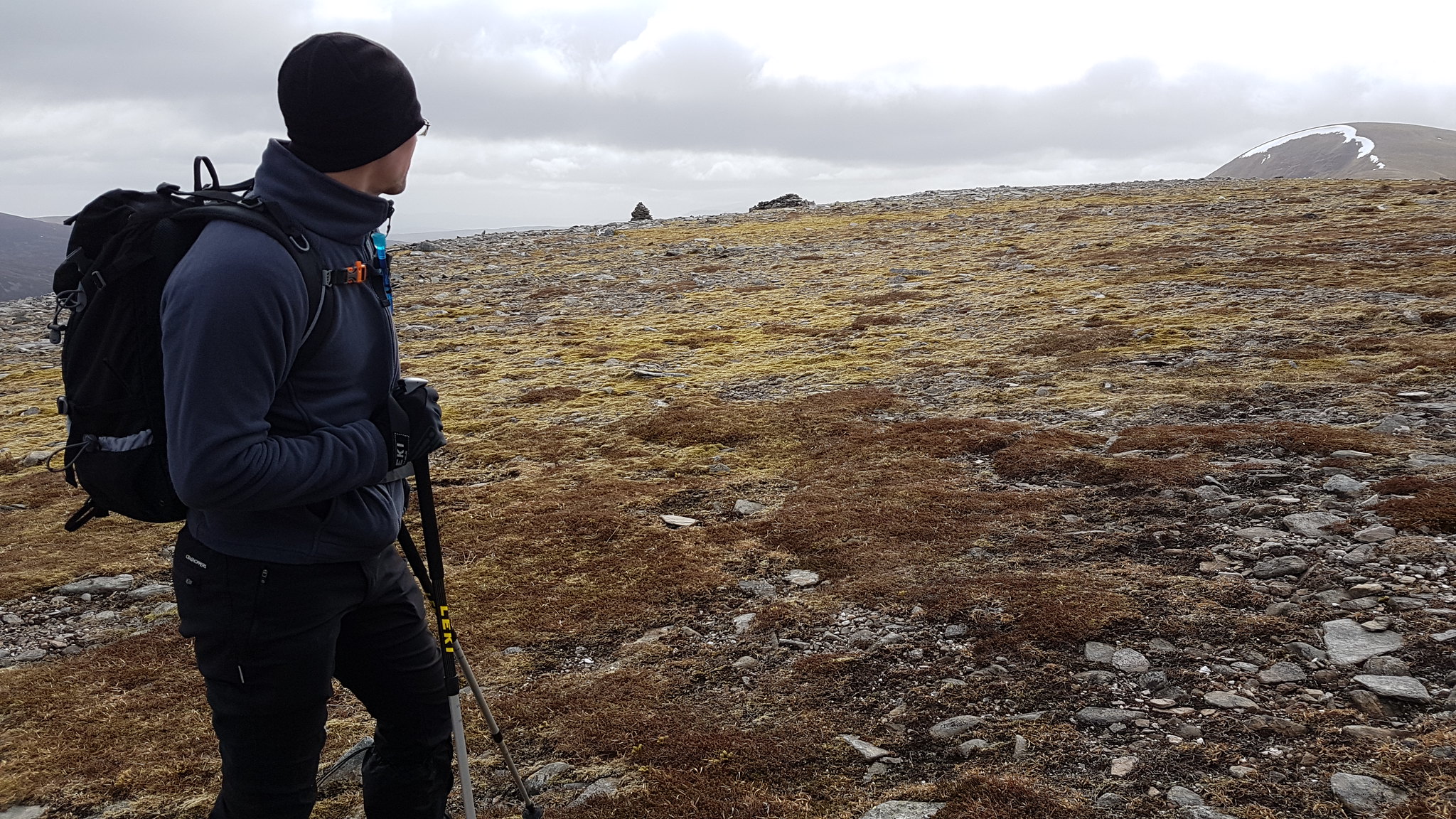 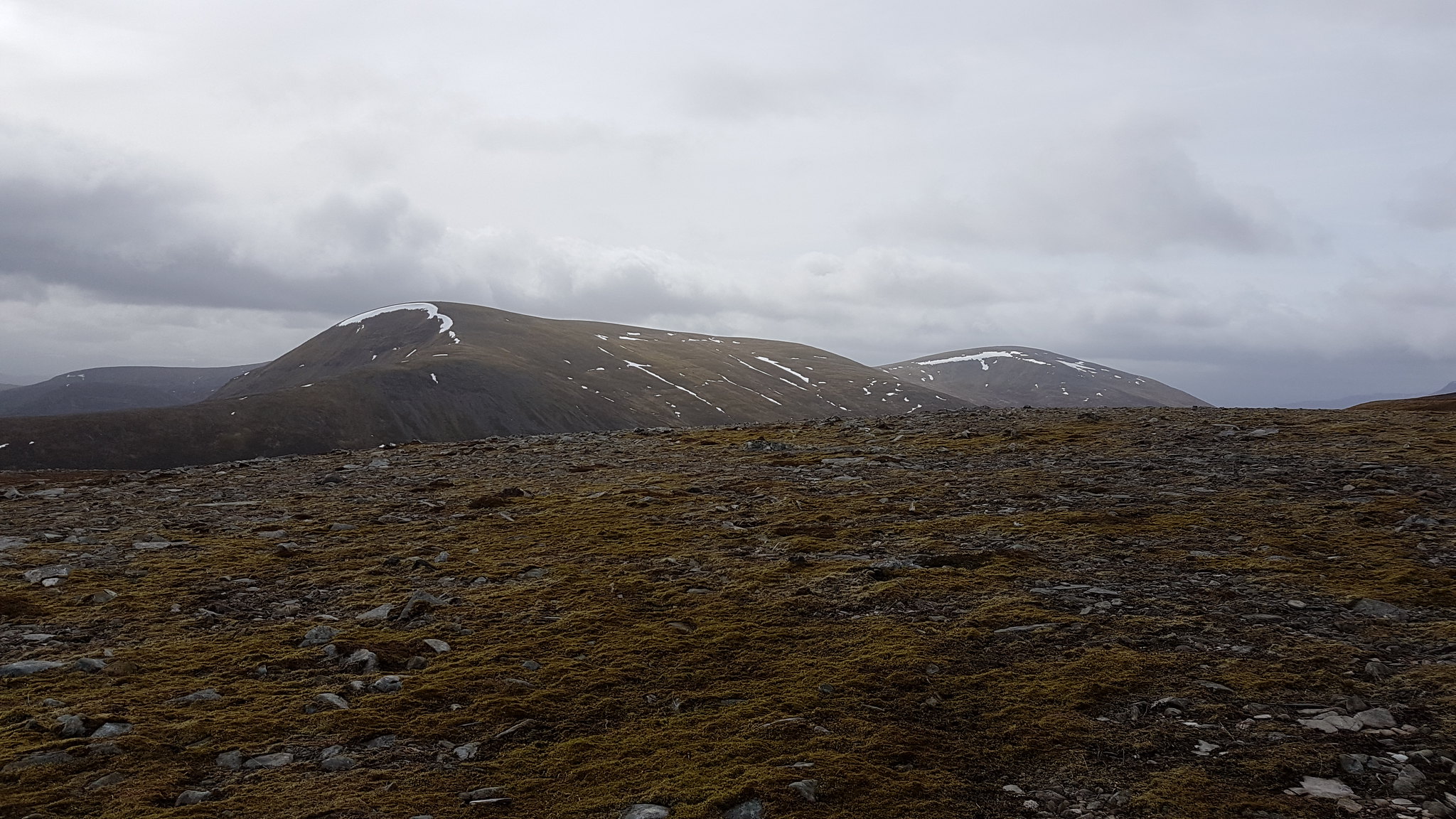 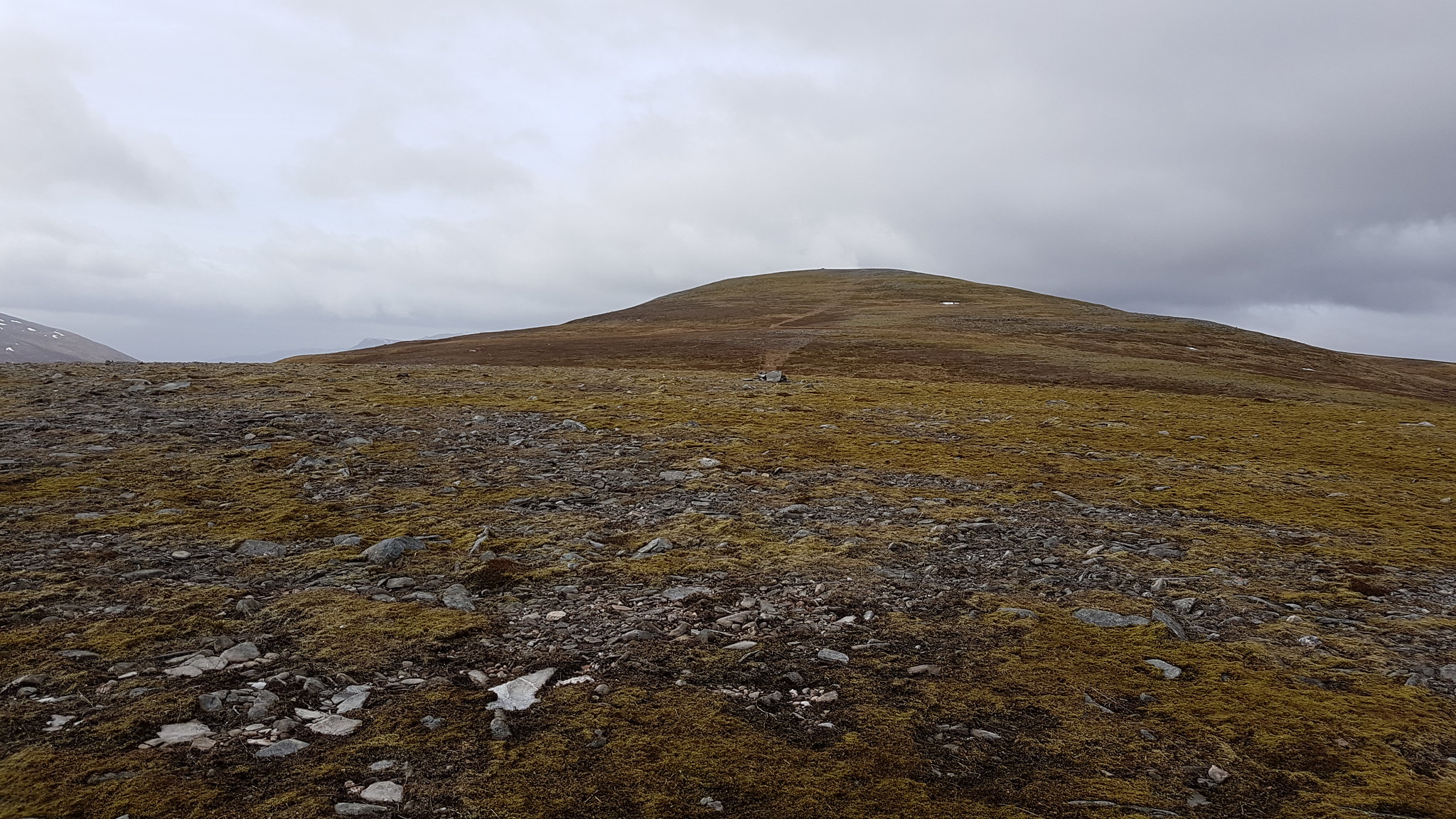 That's further than it looks 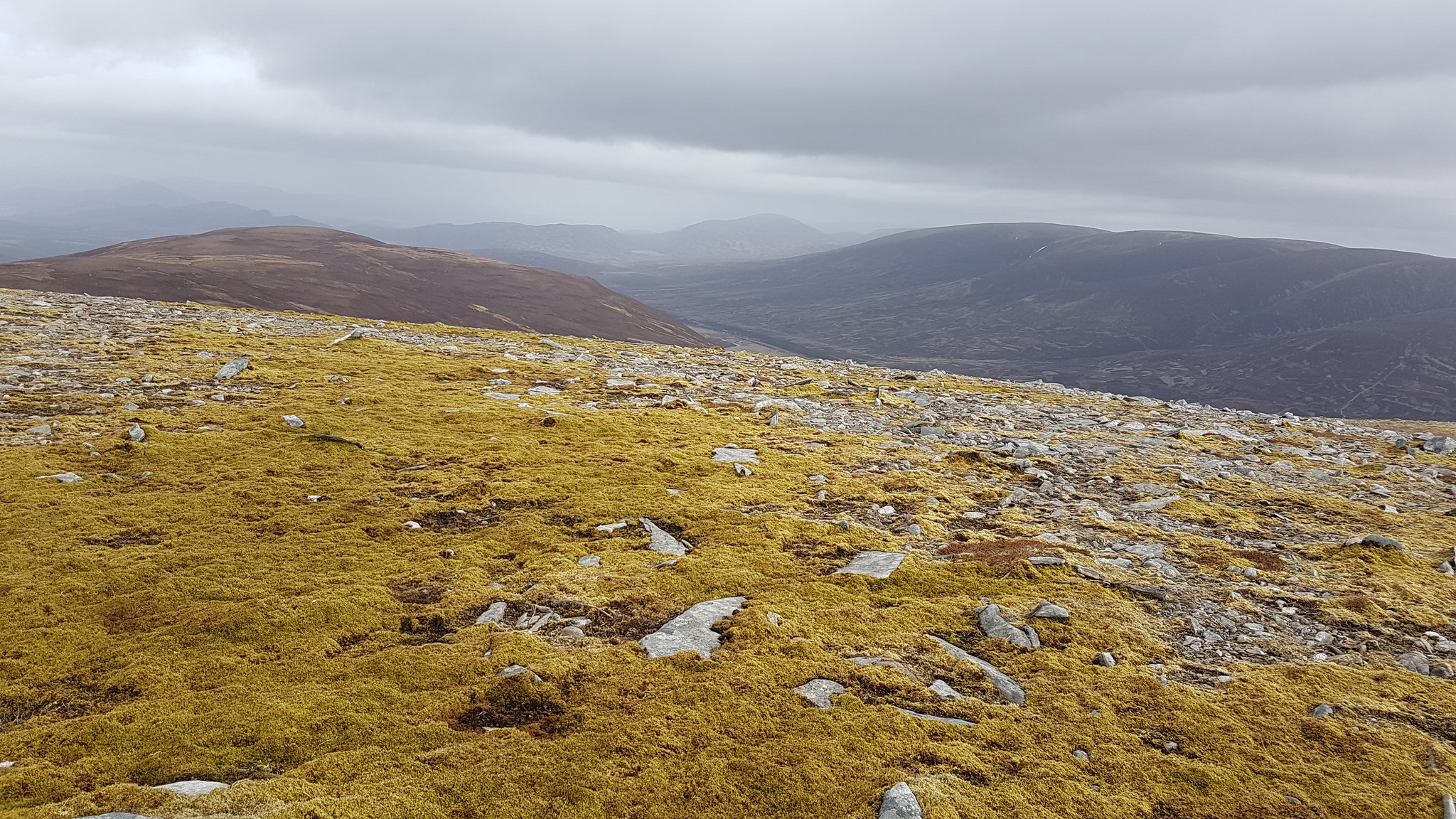 We arrived at the summit, a massive open area. The only points of interest were miles away 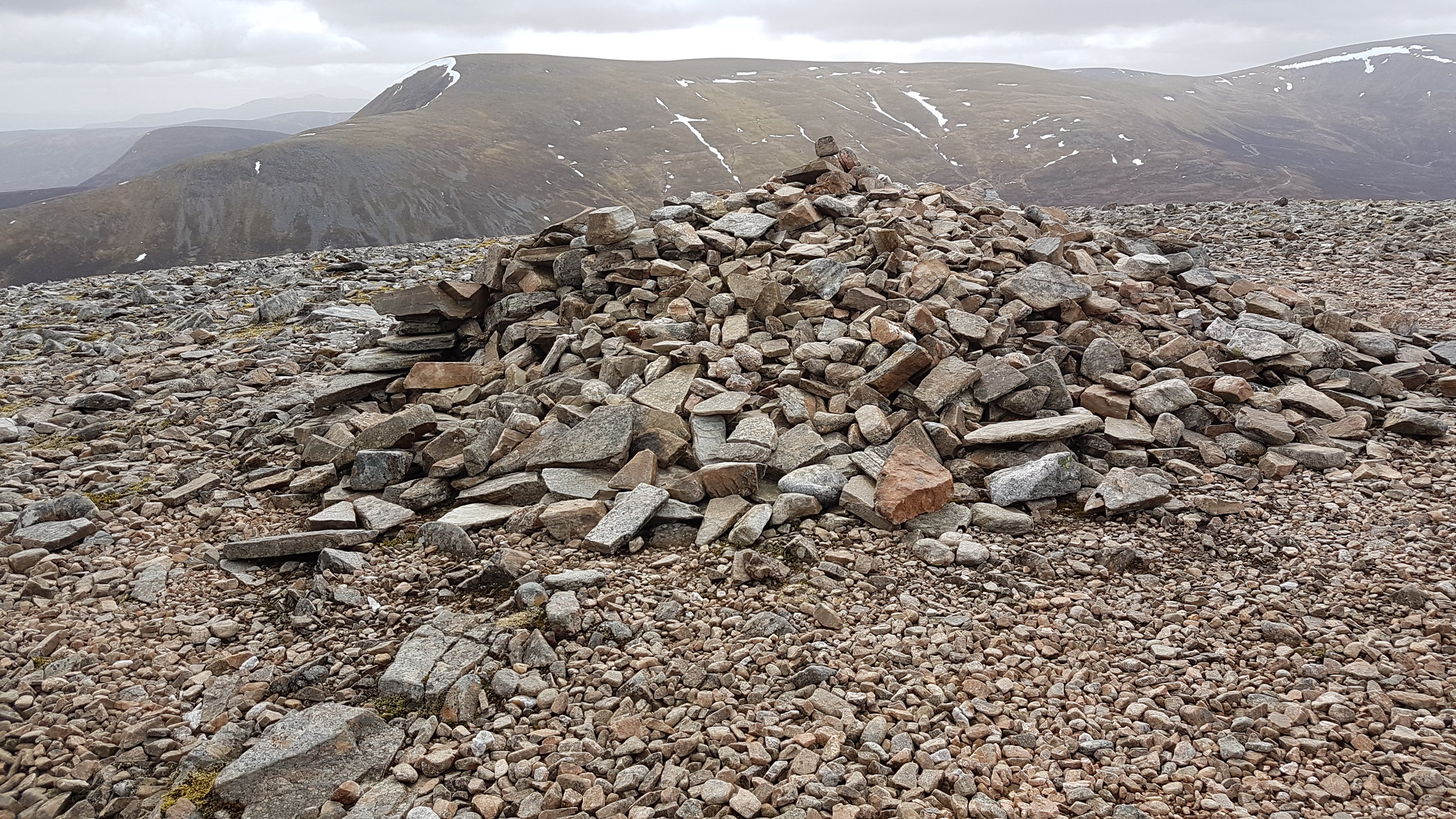 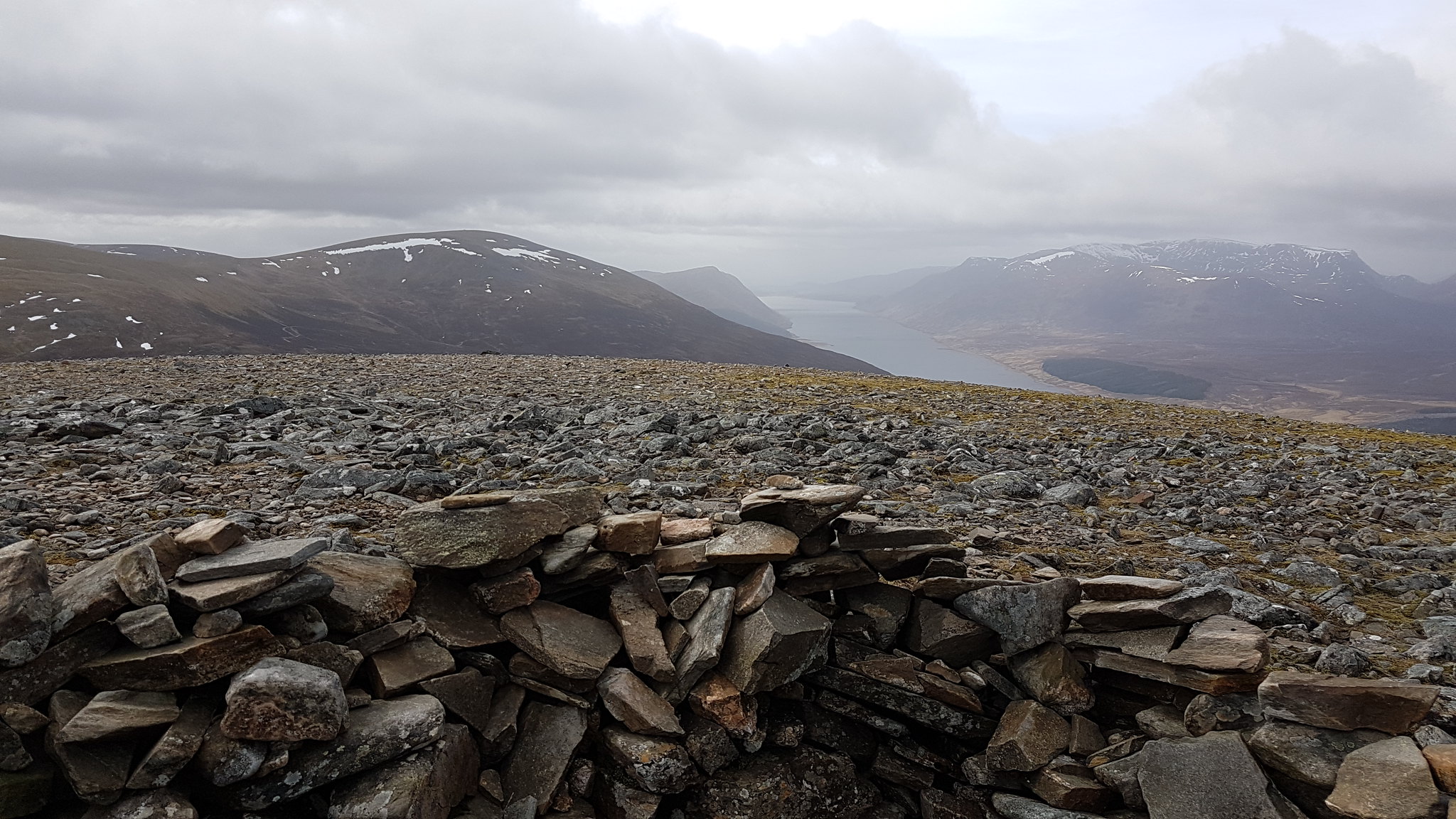 The wind was pounding us severely as we made for the estate road that passes between the hills, at one point there's a rocky rise nect to the path and here we found shelter from the wind, the hoods could come off for a minute bliss. 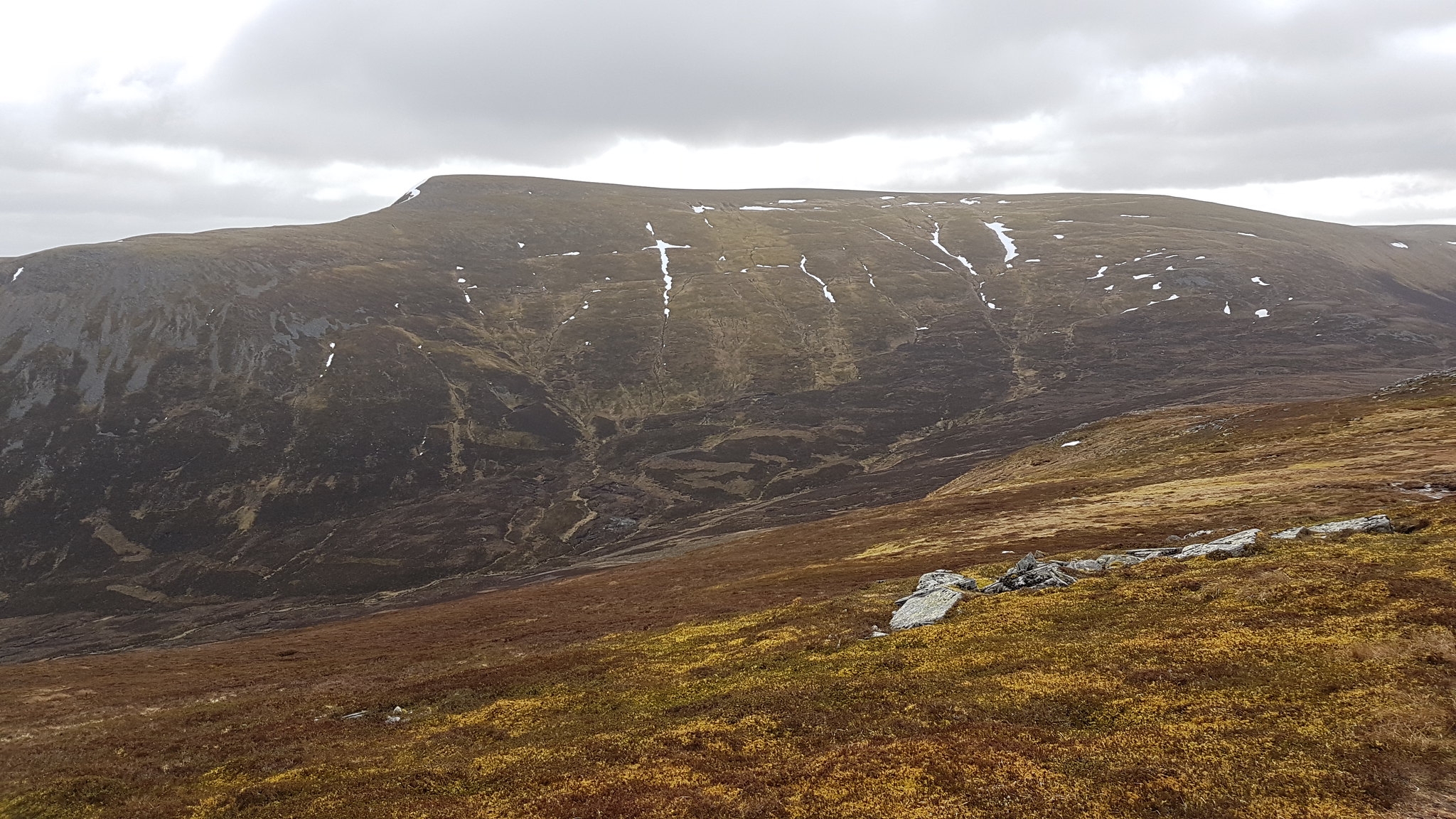 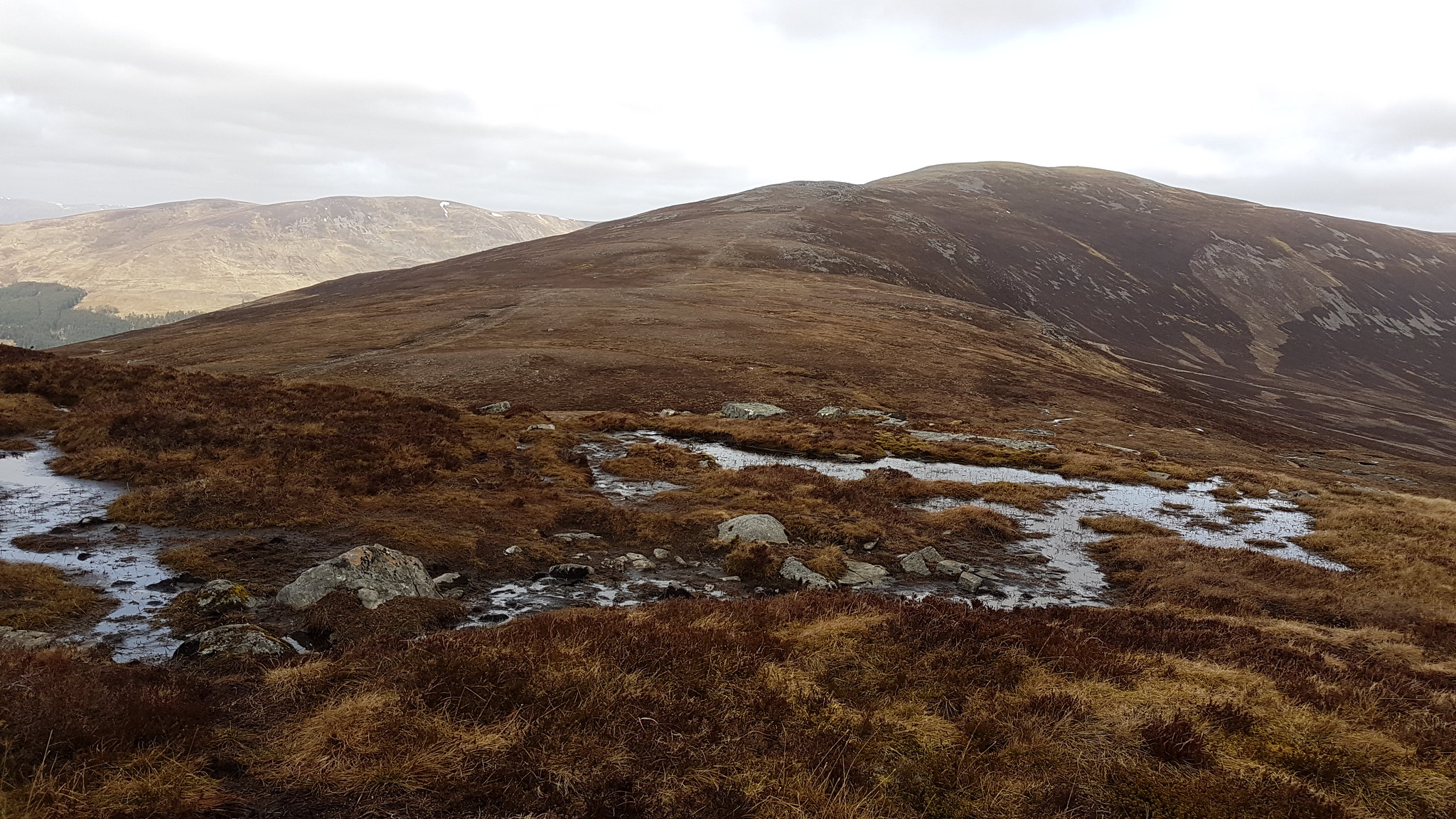 and back to Geal Charn...

The pull to the long flat top of A'Mharconaich seemed steep but actual it wasn't that bad. A few minutes of effort and we'd made it to a marker cairn and from here we went left heading for the summit. 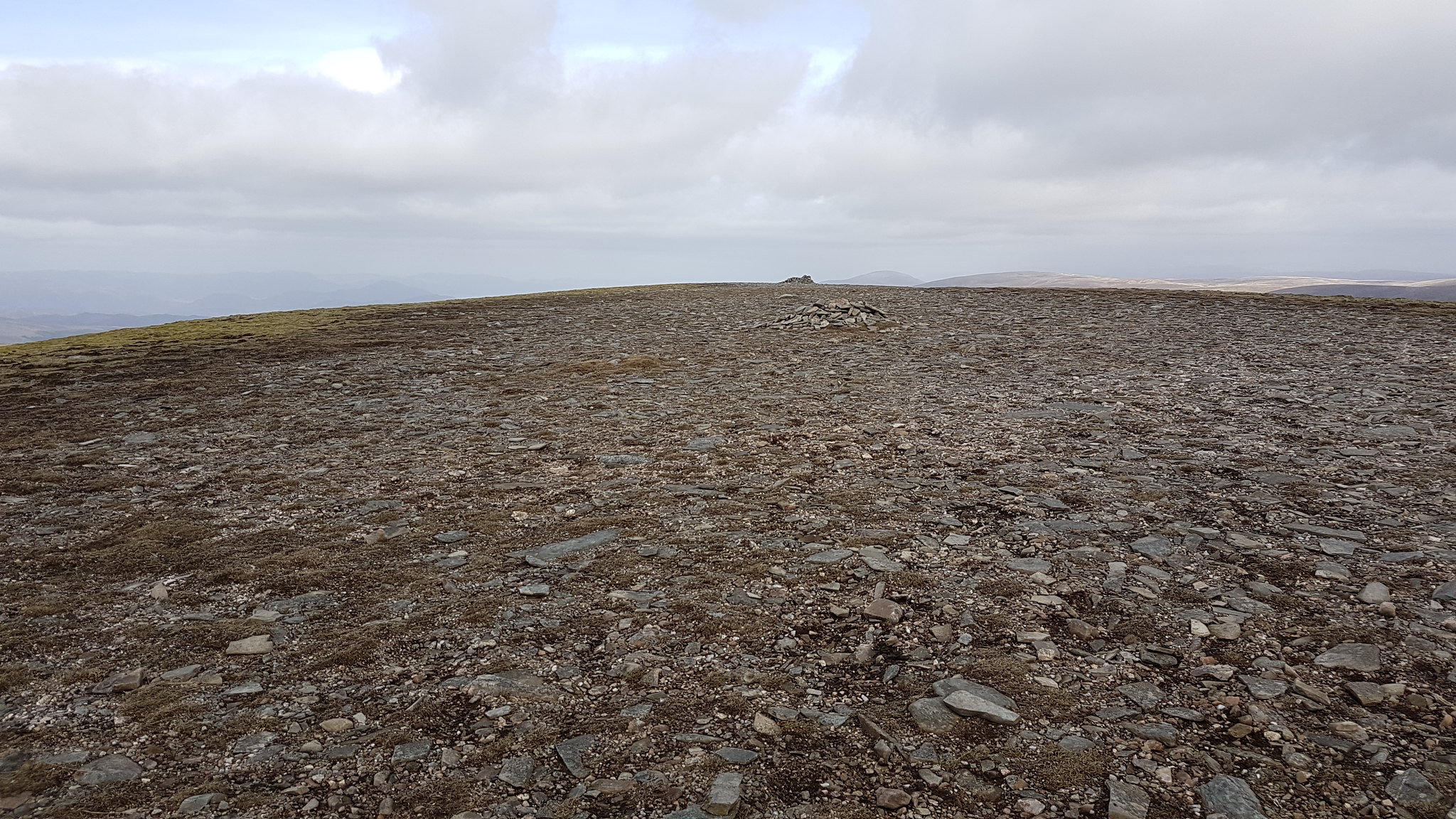 The summit of A' Mharconaich 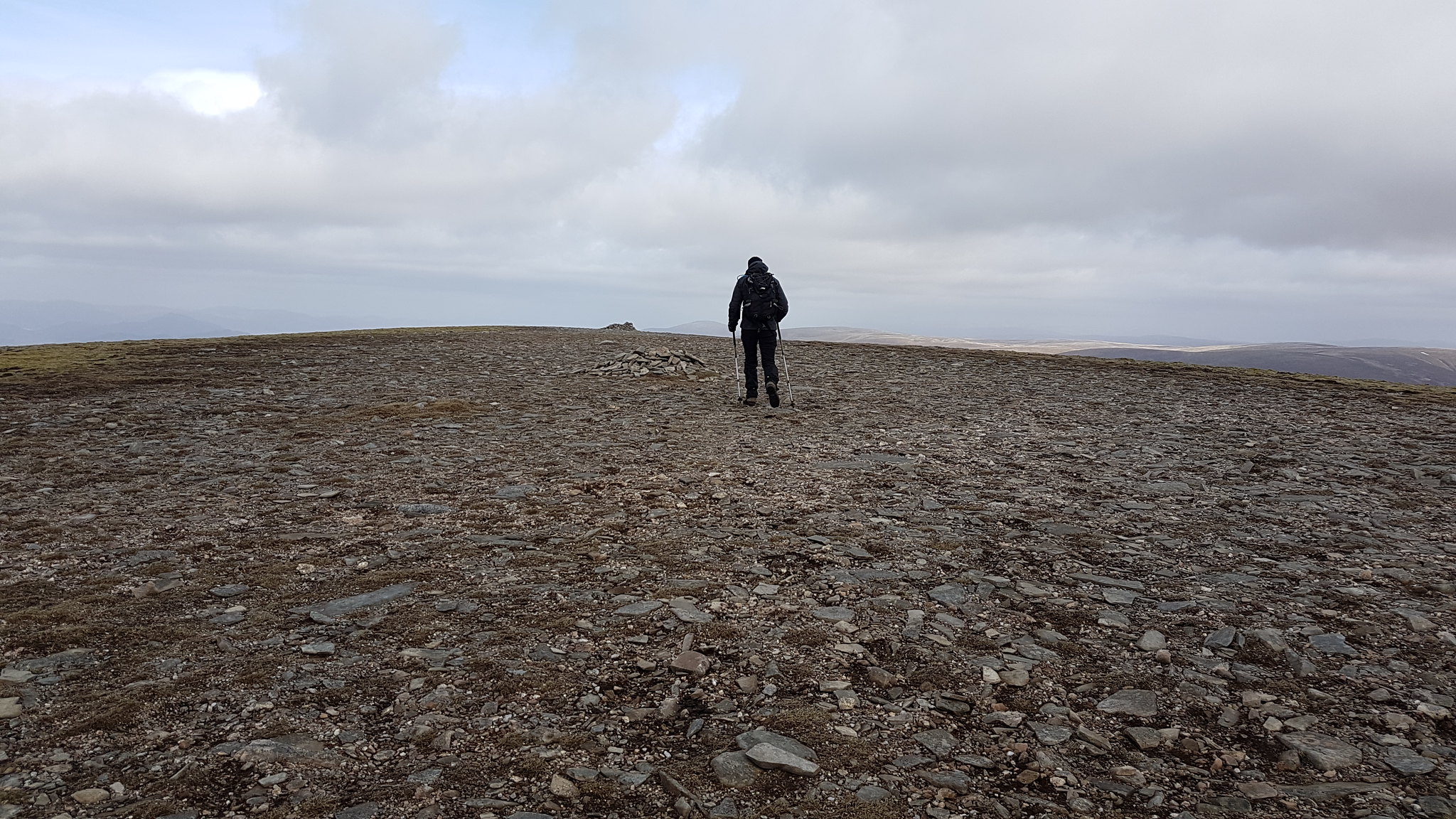 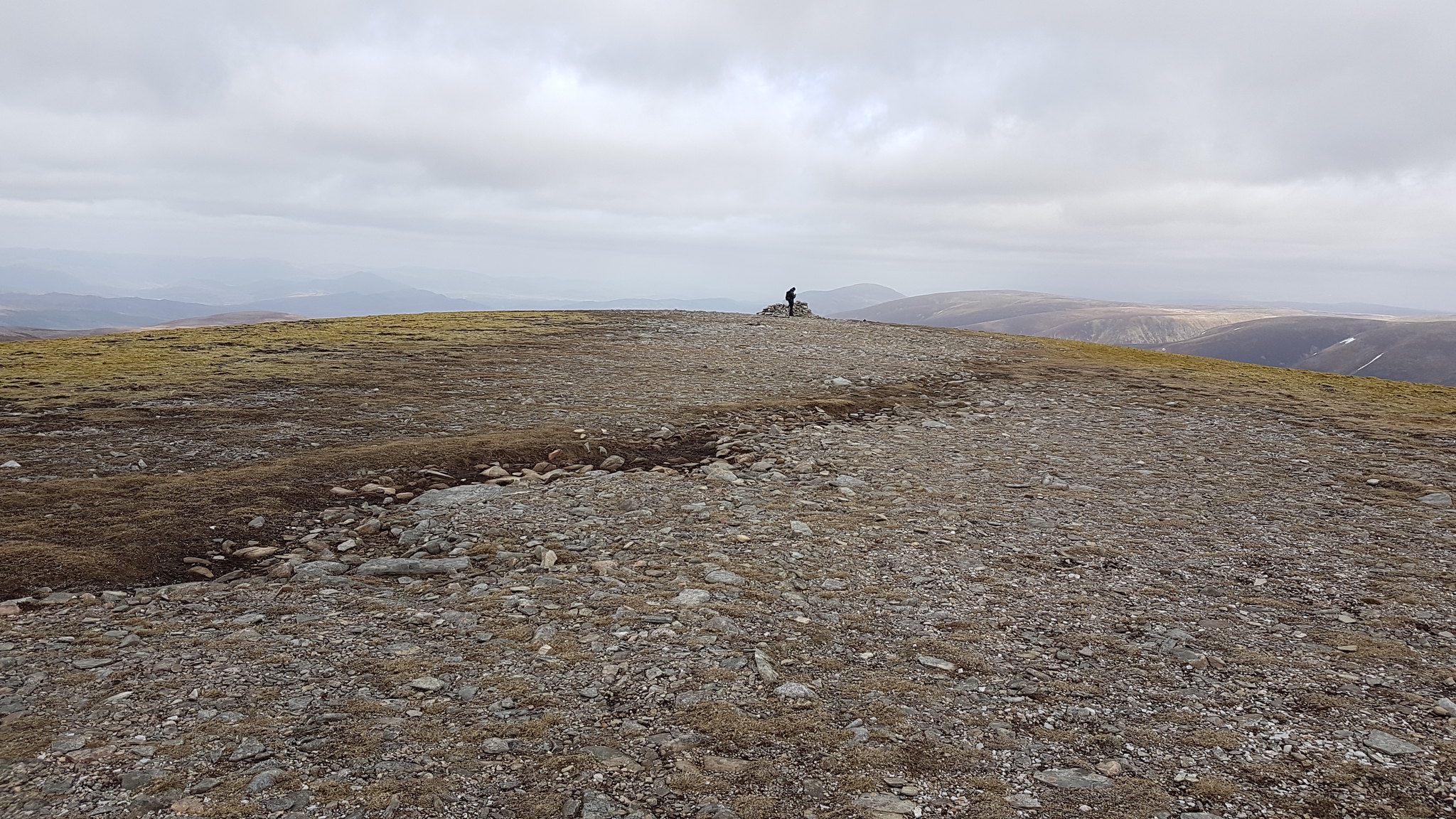 We followed a fence line that takes you all the way to summit of the next hill. Dark clouds had rolled in over Beinn Udlamain casting a dark shadow very fitting that the hills name translates to the gloomy hill

We did stop to have another bite to eat before the steep pull up to the cairn where the fence takes a 90 degree turn and heads for the summit.

The balls of my feet were feeling sore by this point, that's not happened to me for years now 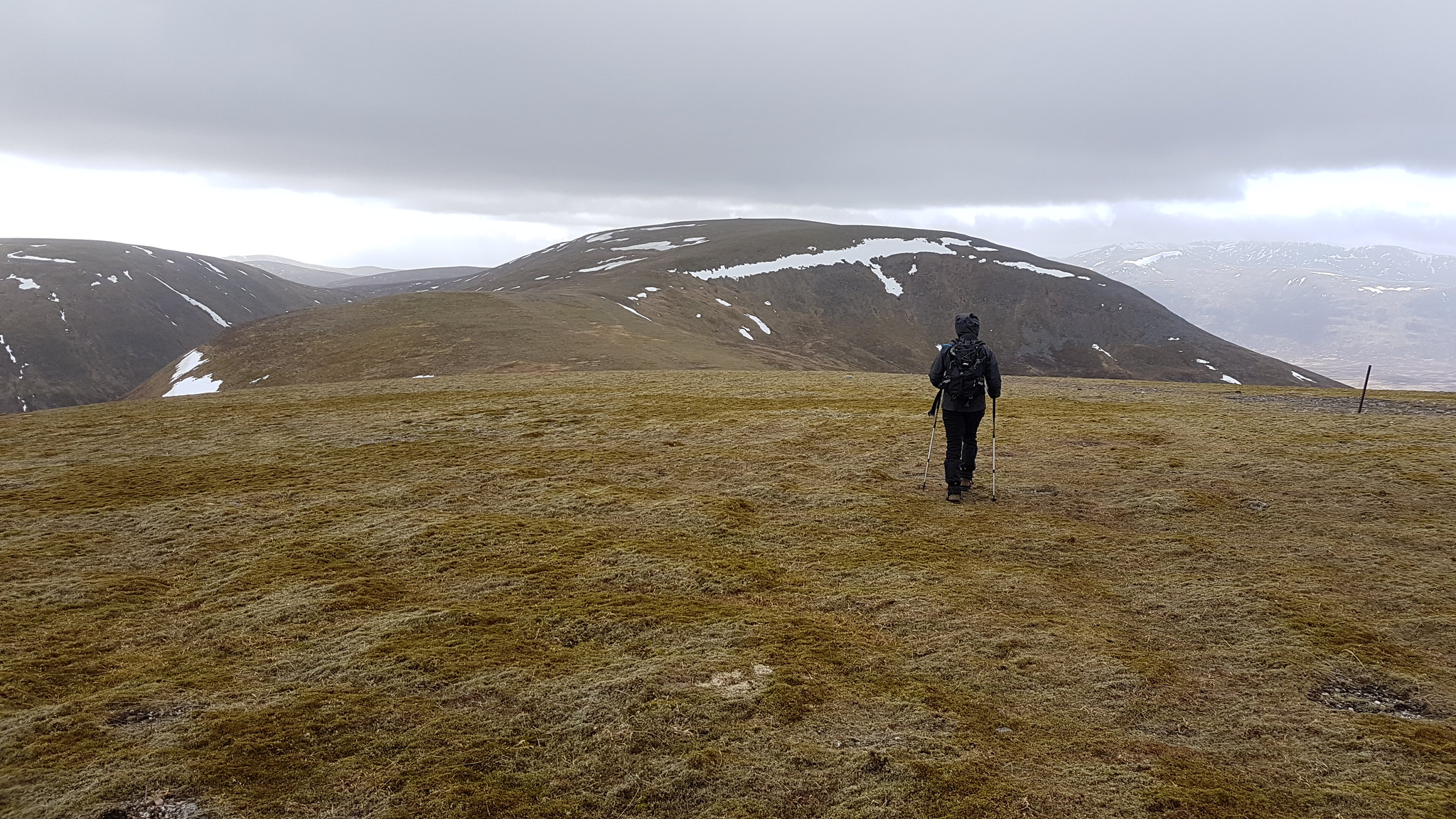 Before we knew it we were on the top. The wind was still ripping the faces of us 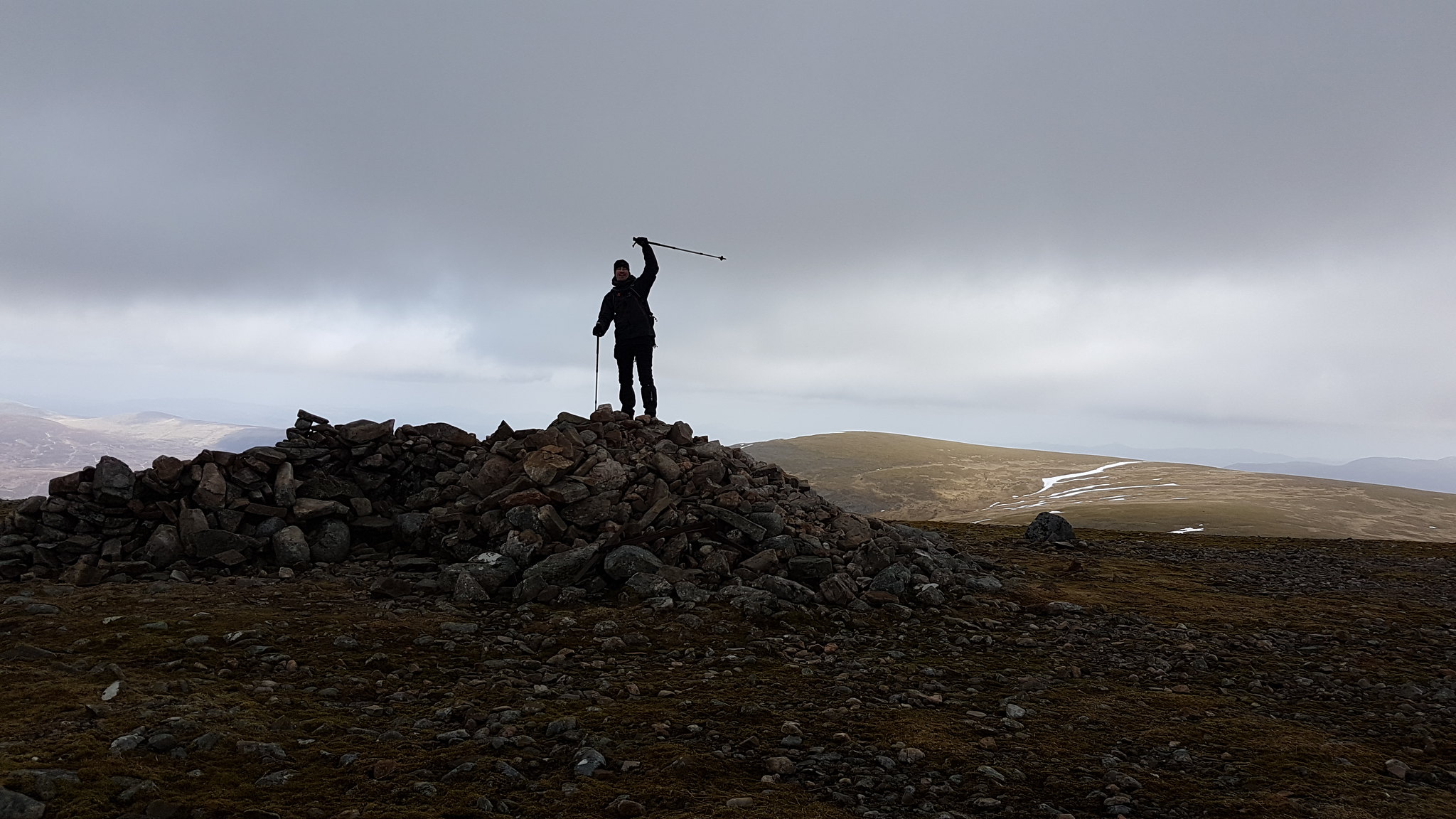 We followed the fence posts off the hill before picking up a path that took us onto the next hill.

We followed a path that took us to a cairn on a minor top before we set off to reach the proper summit. 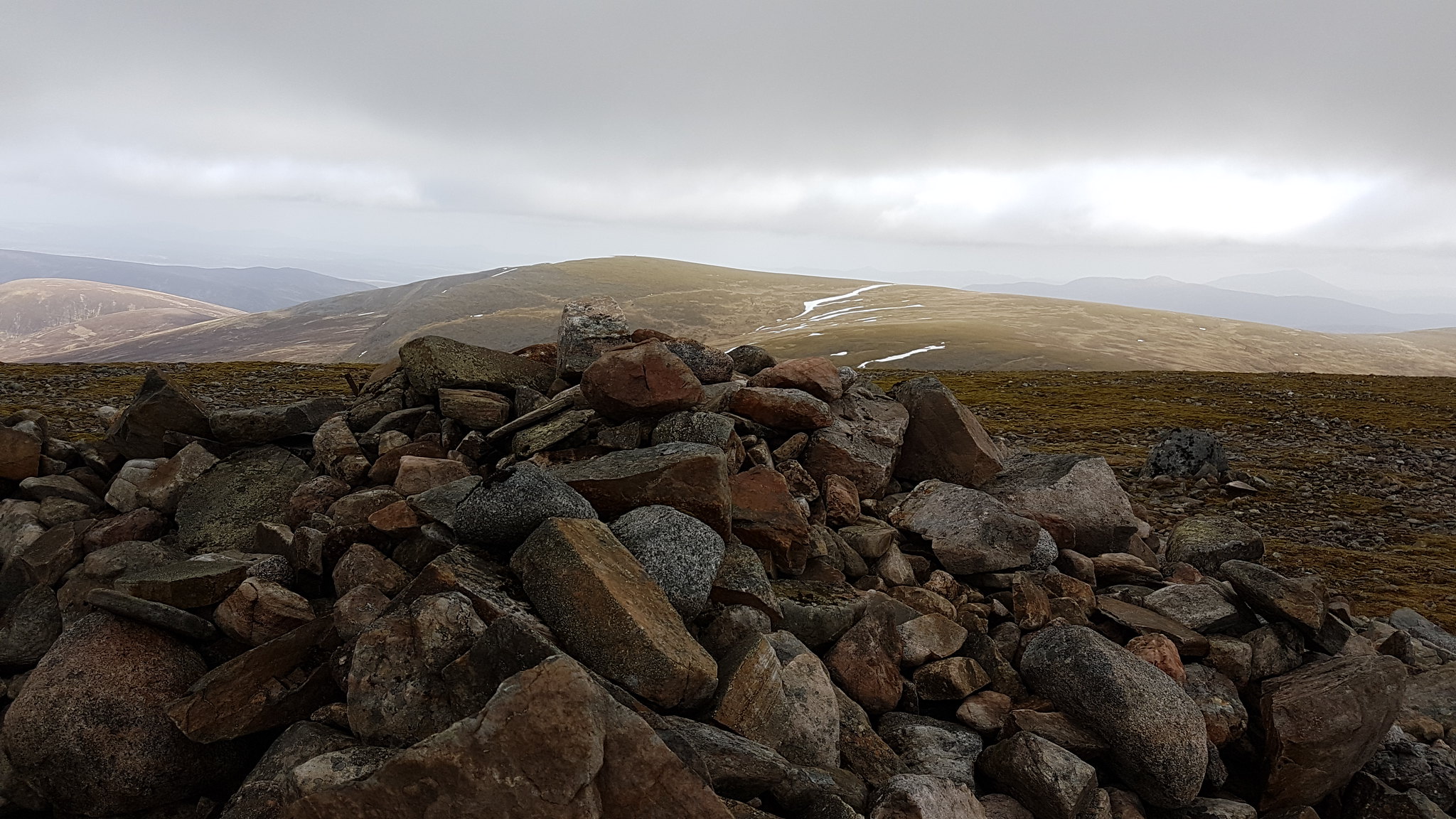 The next hill, Sgairneach Mhor 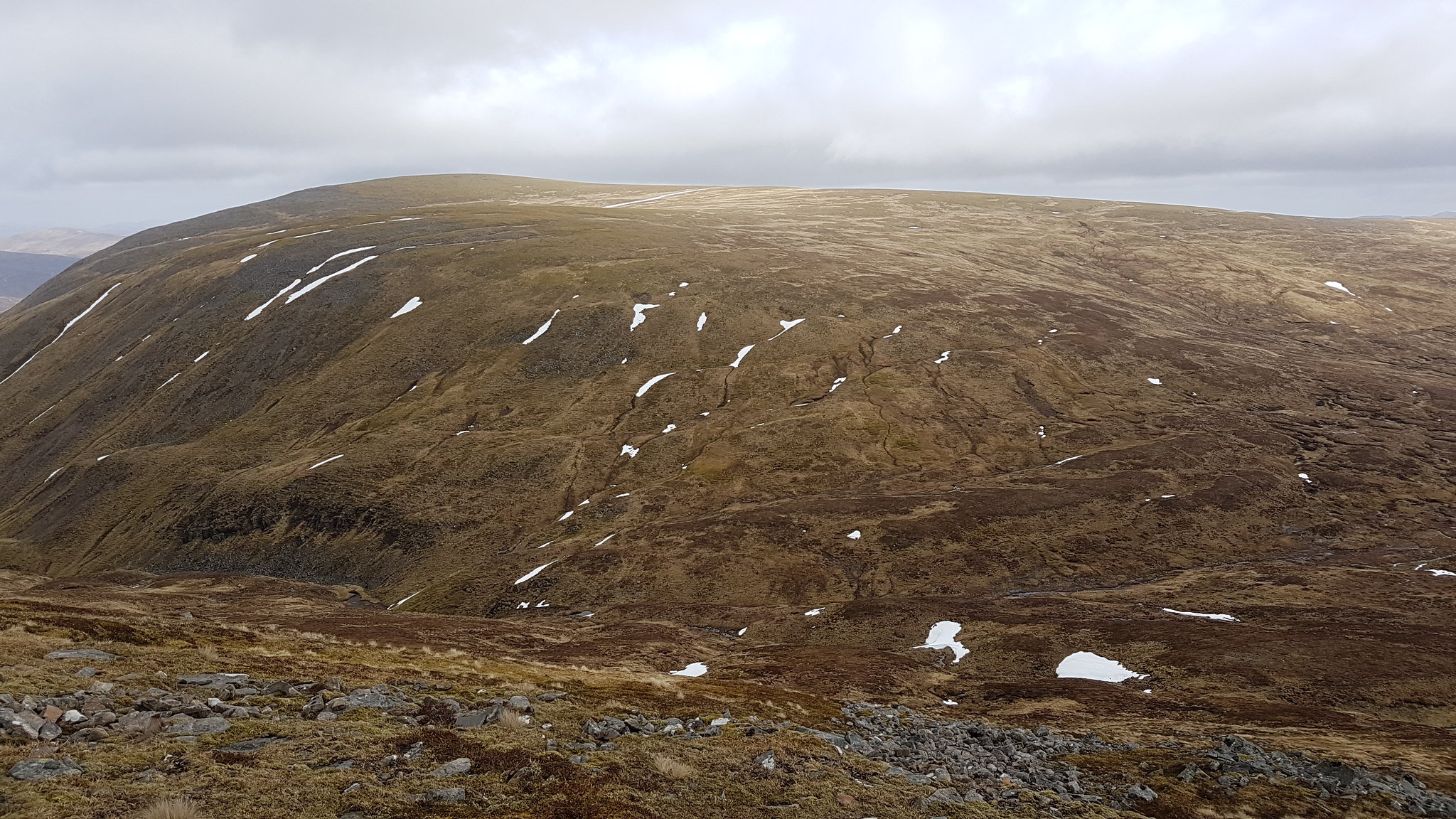 This summit was the most interesting of the 4 Munros, I like a trip point I must say. 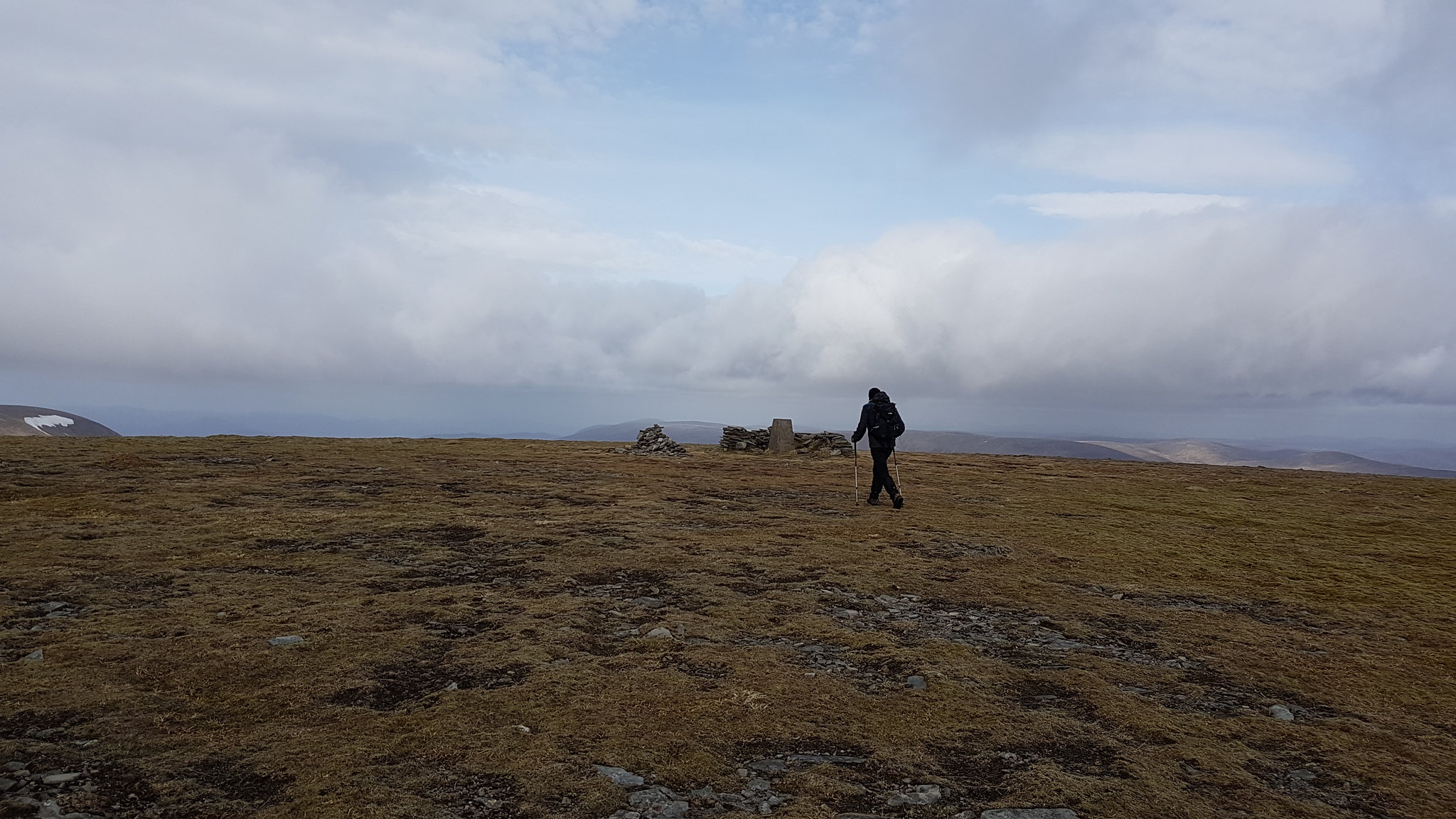 We left the summit and tried to follow the path around the top of the coire but the wind was intensely powerful walking in a straight line wasn't easy. 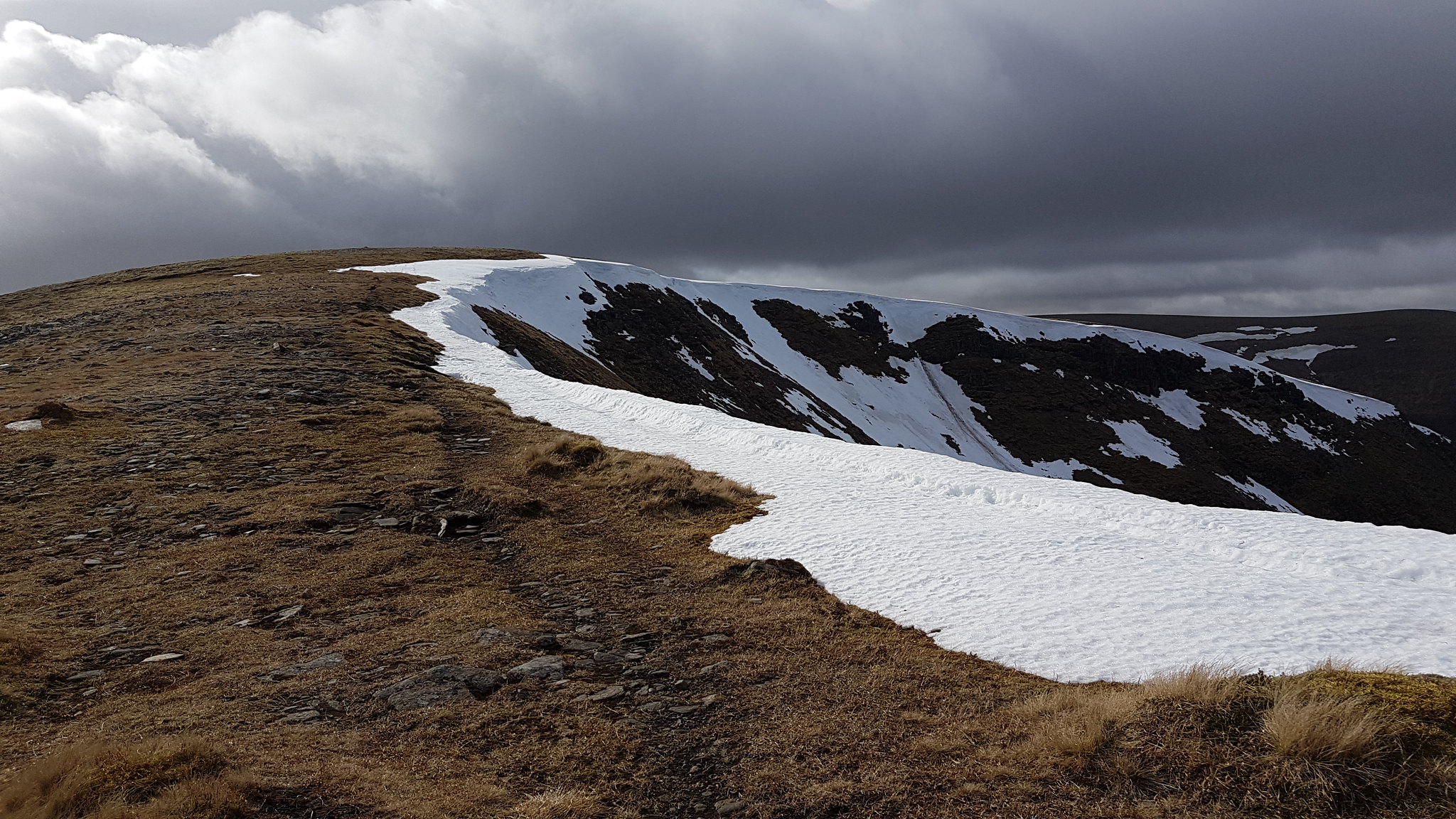 The crags of Coire Creagach

The next hill on the list was the fantastically names 'Sow of Atholl'.

A bit of back story here...

Long before I developed an interest in hill walking I've always had a bit of a thing for this hill. As a child my parent's would take my siblings and I from Morayshire to Perth for family visits, passing through Drumochter the Sow and the Boar (didn't know the names at the time) stuck out as really noticeable features and I always wanted to climb them.
My father told me that mountains were made from dead dinosaurs, they had died and got covered in dirt and I believed this for years, the Drumochter Pass gives a real sense of how big dinosaurs must have been 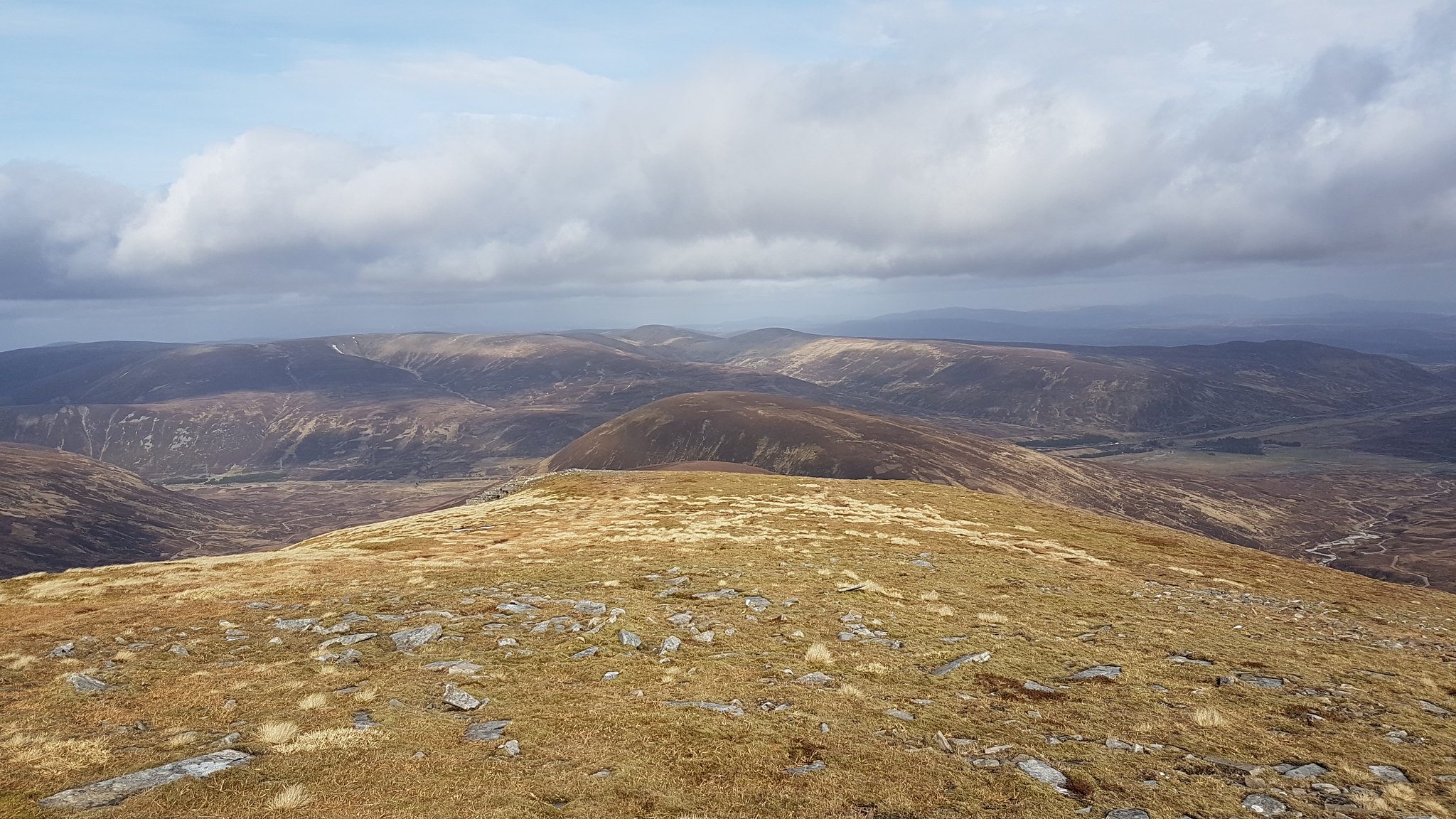 Having asked my dad to stop a number of times so we could climb these hills only to be told no, don't be daft I now finally claim to have genuinely fulfilled a life long ambition...I've topped out the Sow of Atholl!

A panorama of the entire walk

I don't think Pieplough fully understood my motives for wanting to climb this hill but he was a true mate that forced me to dig deap to make the top after a long walk.

We walked about on the top for a while trying to work out what was the best way down, we decided on the North side because of the dirt road.

I found somebody's left over bottle of Vapour fluid so took it off the hill. People are bloody arseholes sometmies. 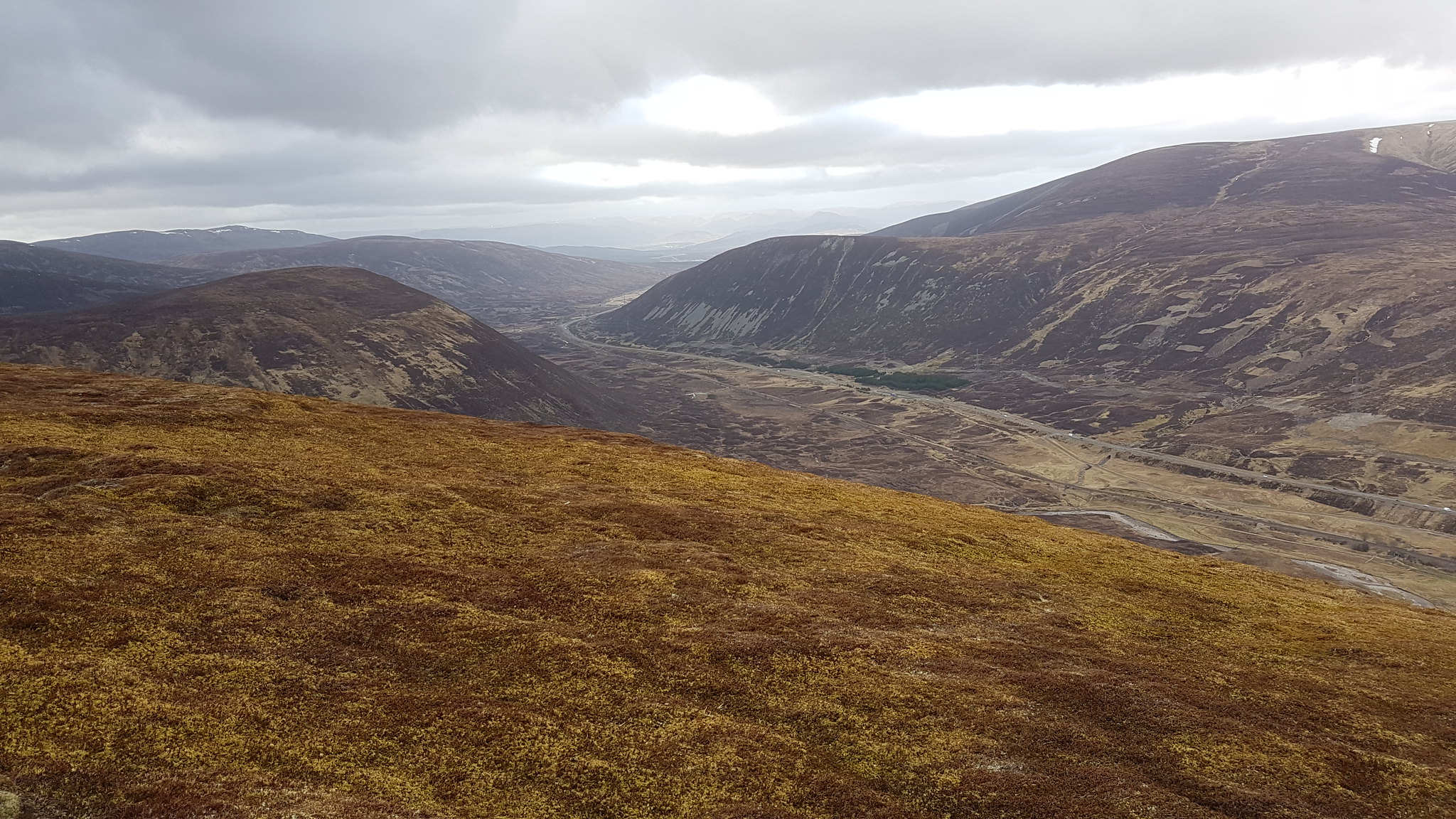 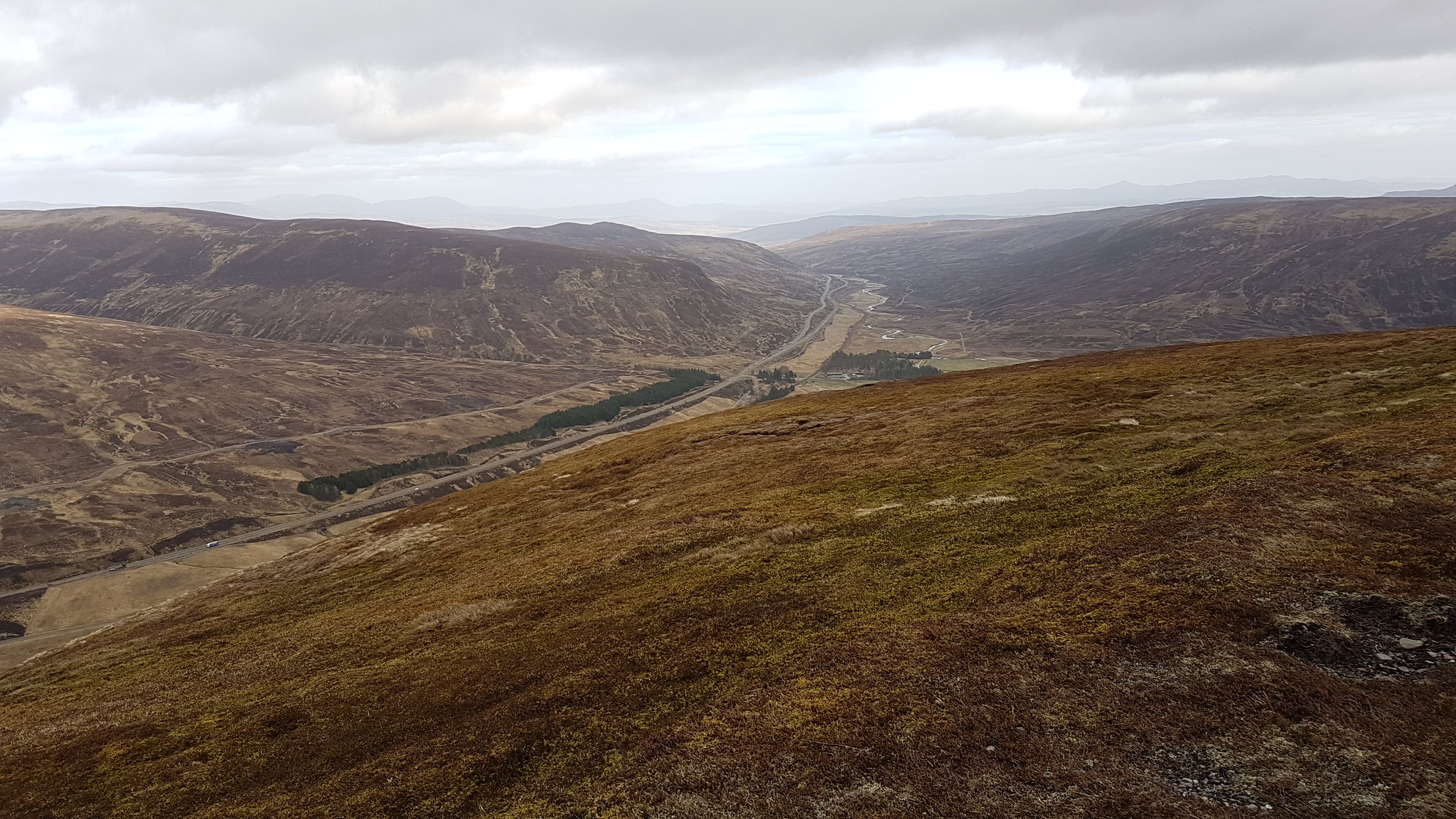 The decent was steep but not as bad as it looked, the ground was decent short bouncy grass that eventually turned into heather but by that time we picked up a boggy ATV track along a line of grouse butts, this boggy ATV track would turn into a far better road after a few more minutes walk. We just followed the road to the tunnel and back to the car. 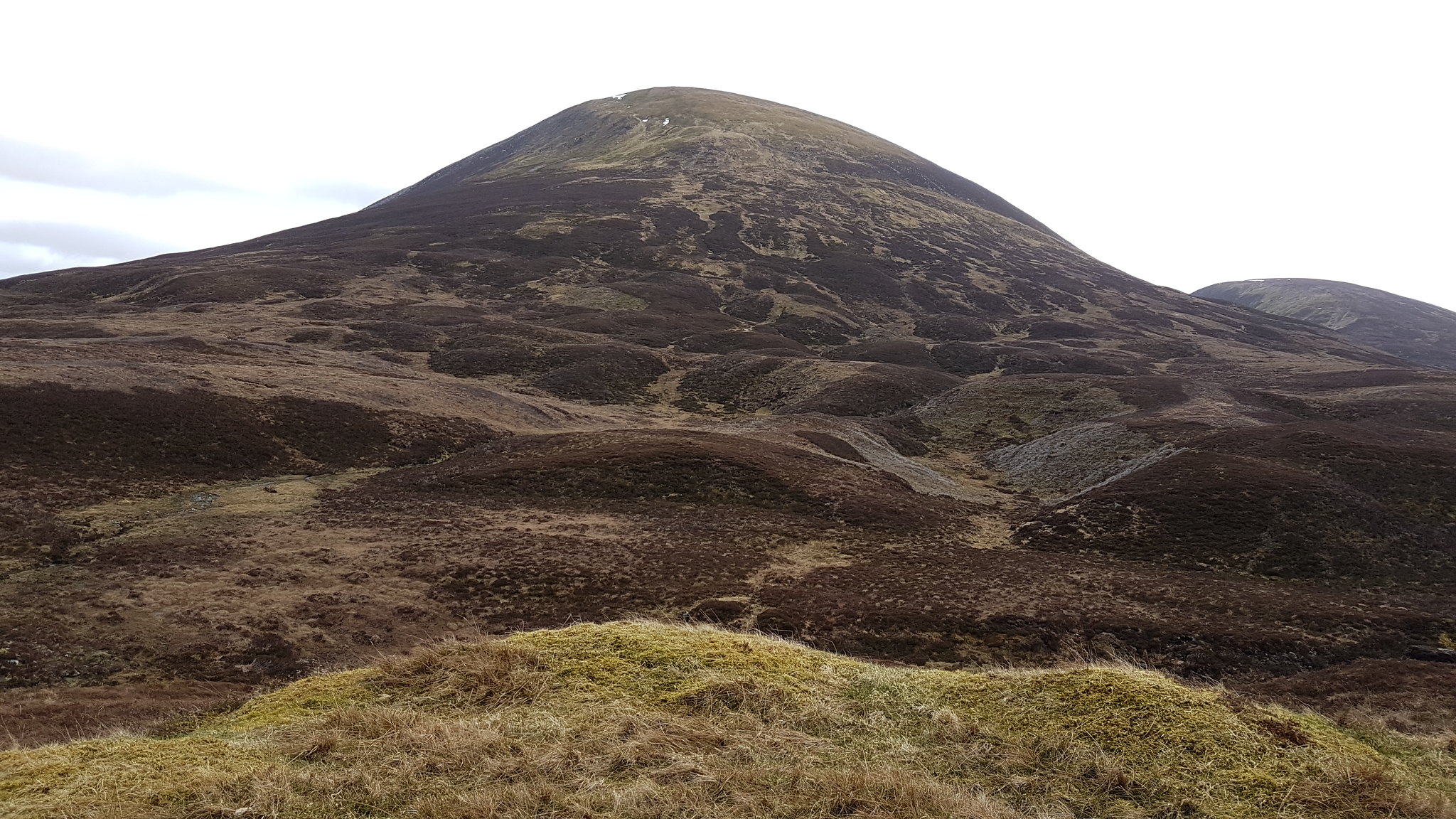 Looking back up to the Sow

I hate this sign, there's far more to the Highlands than Loch Ness. 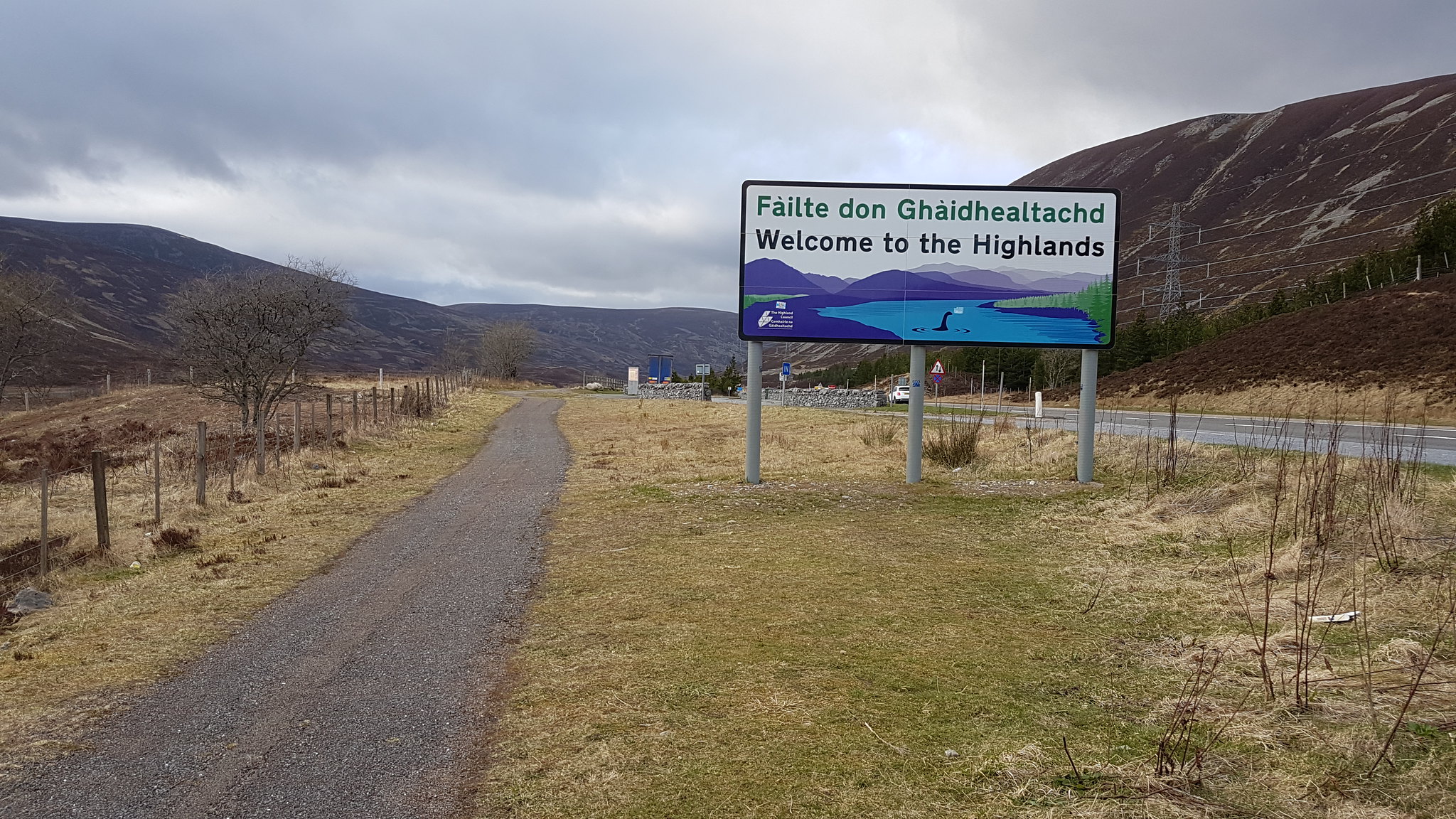 I was feeling pretty good at the end of the walk but my feet were a tad sore. When I took my boots off it was clear why...I had forgotten to put my superfeet insoles in, I had been walking with no liners at all

We stopped in Perth for a McDonalds. Mmm Strawberry milkshake