The Cairnwell Munros.gpx Open full screen  NB: Walkhighlands is not responsible for the accuracy of gpx files in users posts

Today's forecast looked ok, if a little cloudy, so I decided to get up early and get The Cairnwell 3 ticked off. I'd done two of them before but many, many years ago and had never been up Carn a' Gheoidh, so thought I might as well do all three.

Arrived at the Glenshee Ski Centre car park at about 9am...what a lovely sight it is

I headed for Carn Aosda first...the track starts round the back of the cafe on the right and it's just a matter of trudging up the track, through all the skiing paraphernalia, until Loch Vrotachan comes into view. The mist was a-rollin' and the clouds were a-lowerin'...so the only views were of the ski lifts! 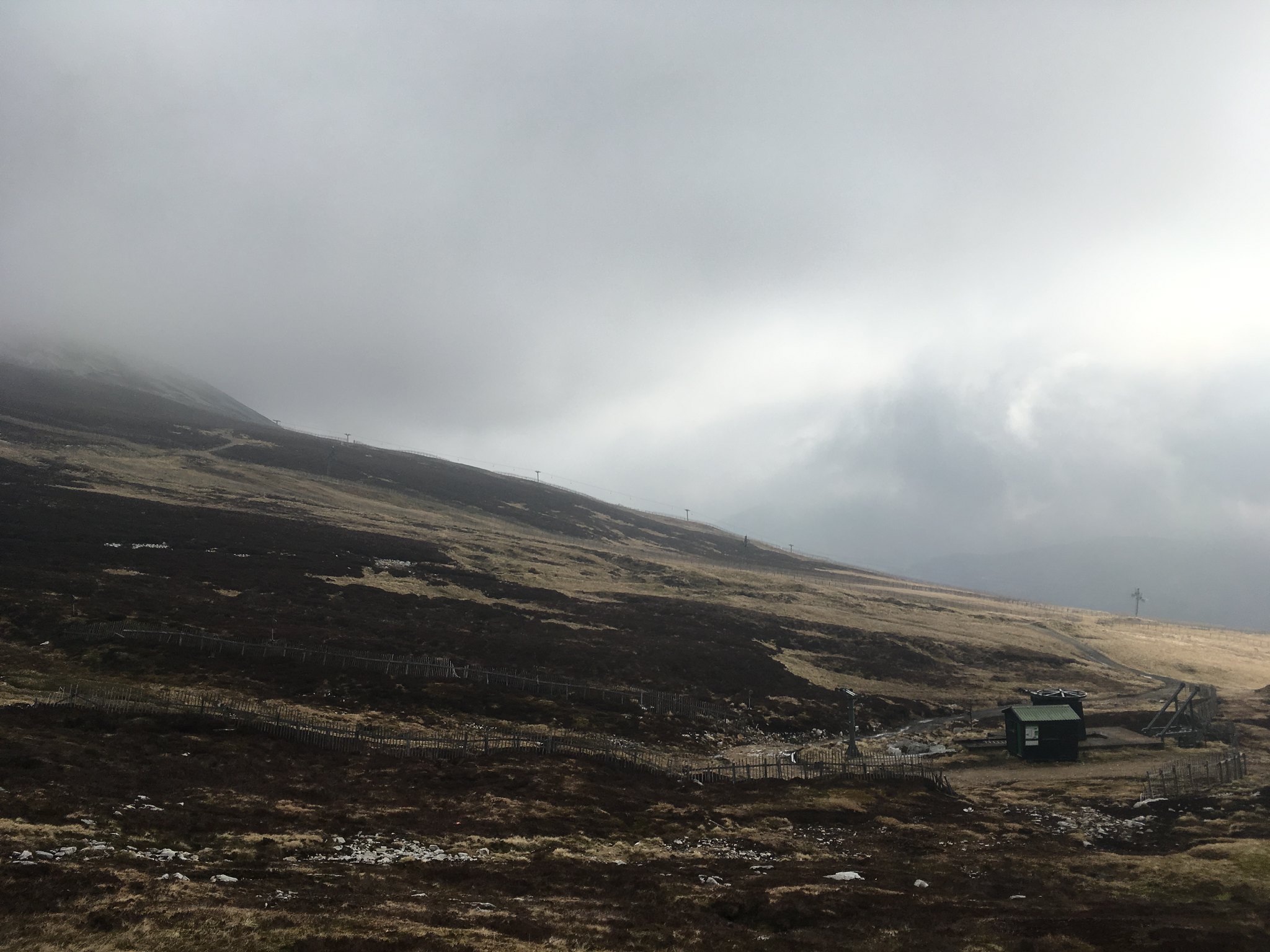 Carn Aosda in the mist 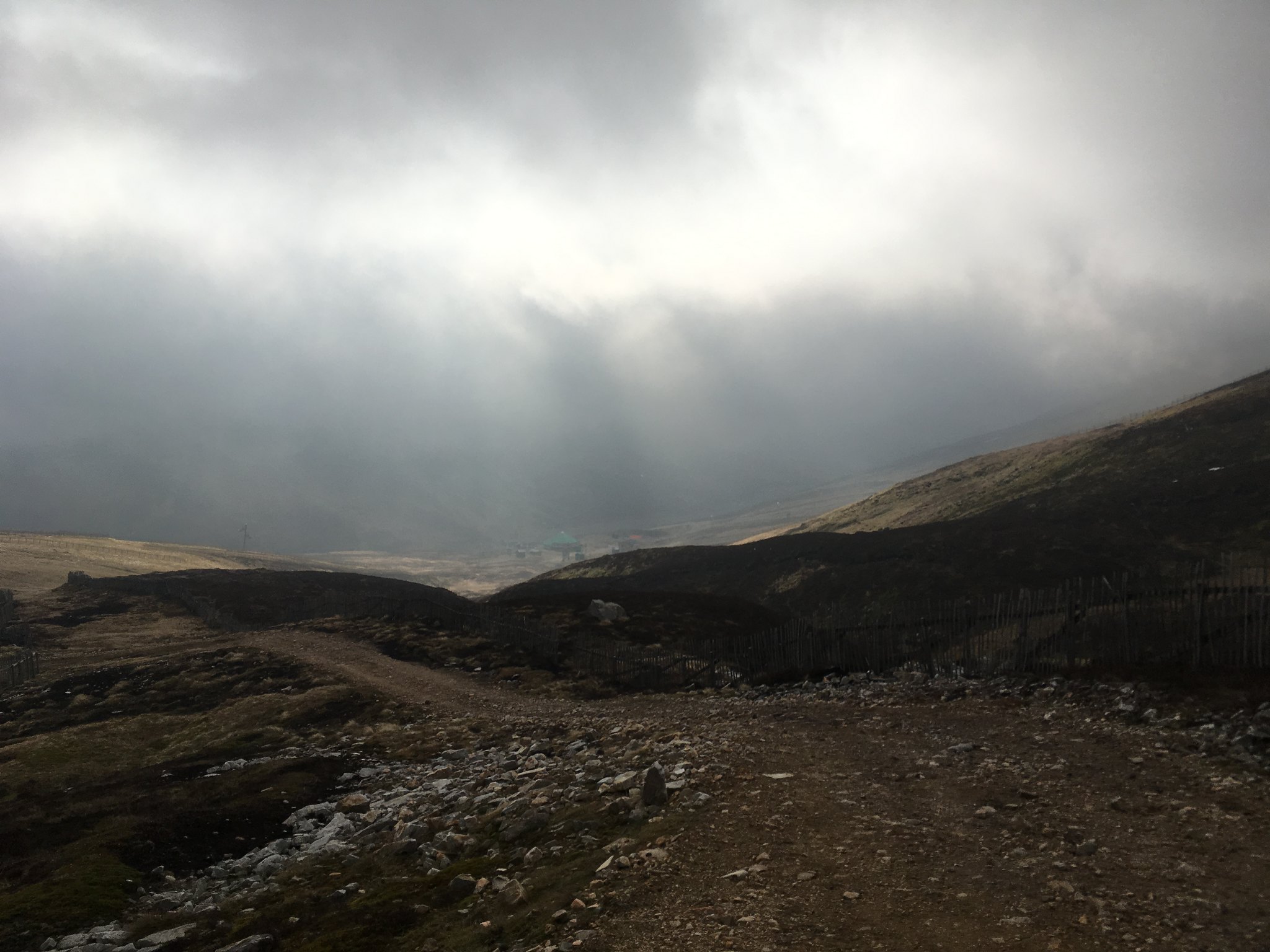 "View" back to the ski centre 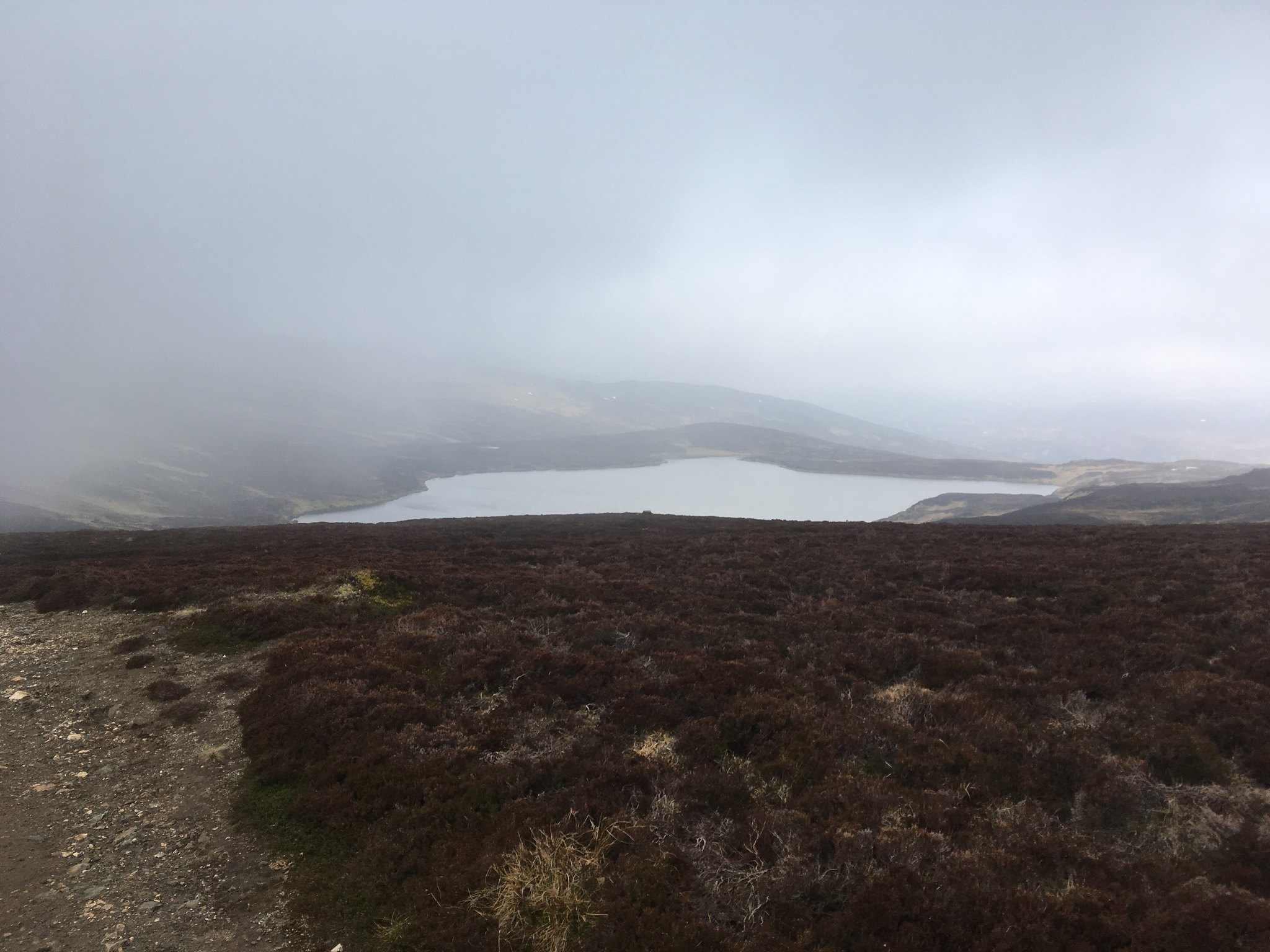 At the top of the track, where the loch comes into view, turn right to head for Carn Aosda...I suppose instead of following the track you could do a short-cut straight up the hill, following the line of the ski lifts, but it looked a bit heathery. This bit of the walk was really nice and atmospheric actually, with the mist and cloud swirling, hare bouncing about all over the place and red grouse flying up into the air and shouting "fancy a shag?" at the tops of their voices...at least that's what I assume they were shouting. The white-coated hare really stood out against the brown heather - they looked a bit self-conscious actually!

You can't escape the skiing though...the track presumably services the ski lifts, so you end up walking through these as you approach the summit. It's not for long though...40 minutes after locking the car I was on the summit of Carn Aosda, and that included a good ten minutes stood watching the grouse. If anyone isn't really into hillwalking, but has "bag a Munro" on their bucket list, then this is definitely the one to do! 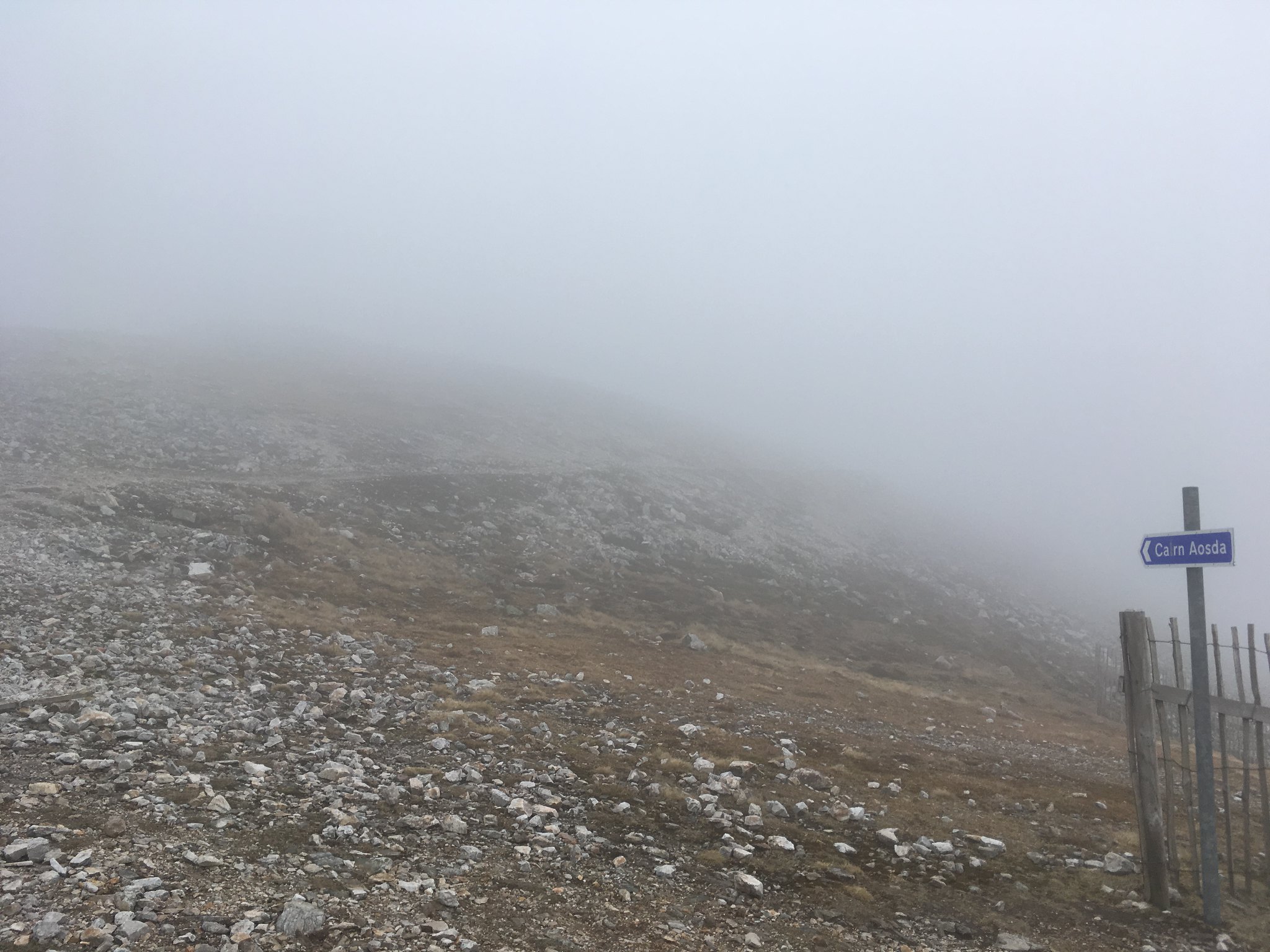 This way to the summit 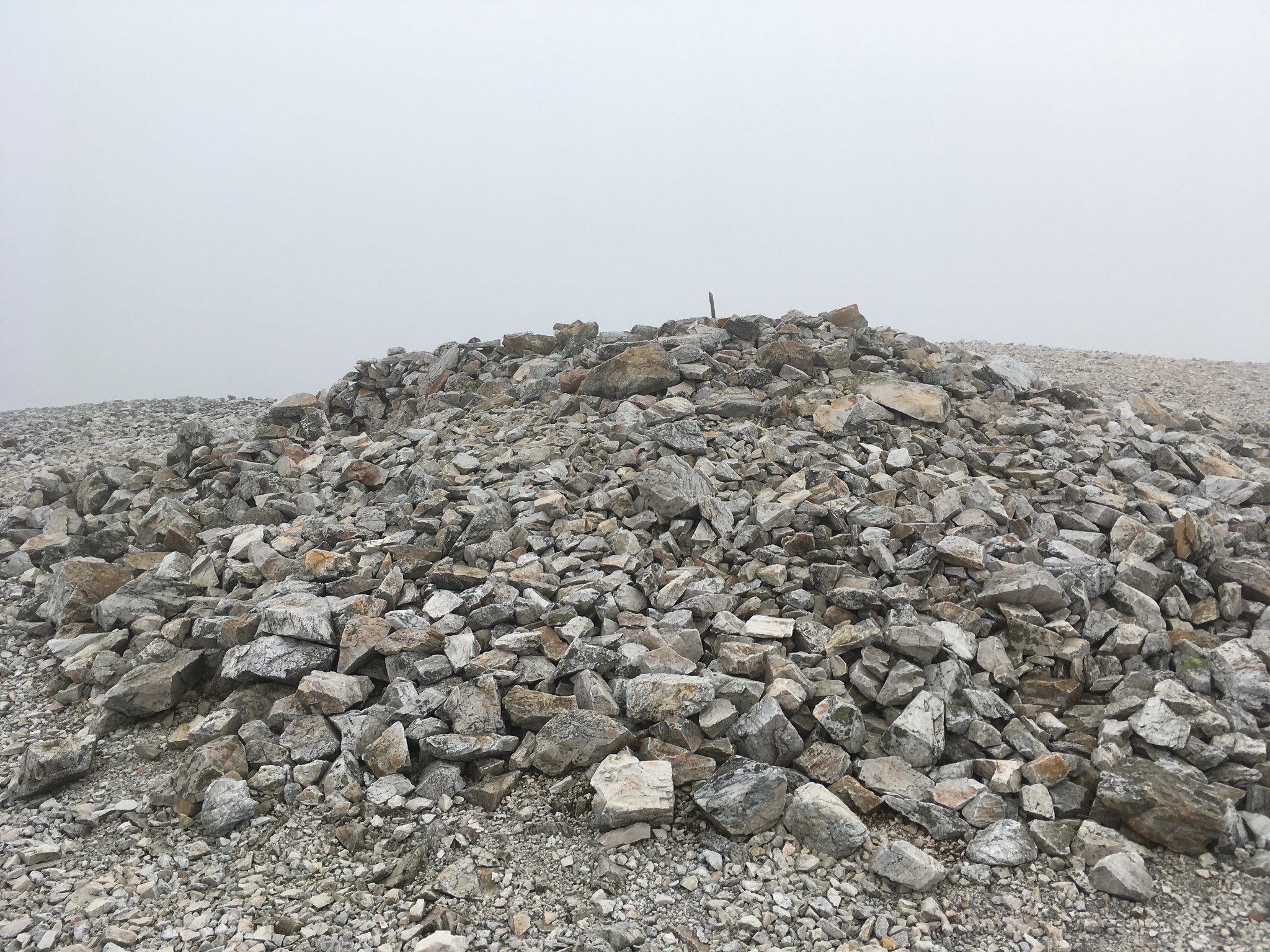 The next target was Carn a'Gheoidh. From Carn Aosda, retrace your steps until you arrive back at the junction of paths where you turned right. Carry straight on for about 20 metres and look out for an indistinct path heading off to the right - carrying straight on takes you to The Cairnwell if you're doing it that way. For the first time on the walk you are now on a path that you couldn't have just drove up. It's a bit peaty and boggy in places, but nothing serious.

At the point marked "808" on the OS Explorer map you come to a junction of paths...keep right and after a short, sharp climb you find yourself on a long, flat ridge/plateau thing that provides easy walking for a couple of km. The cloud was still all around, so I can't really speak about the views, but you pass a couple of picturesque lochans, and the hares were still running all over the place and the air was full of strange bird calls. 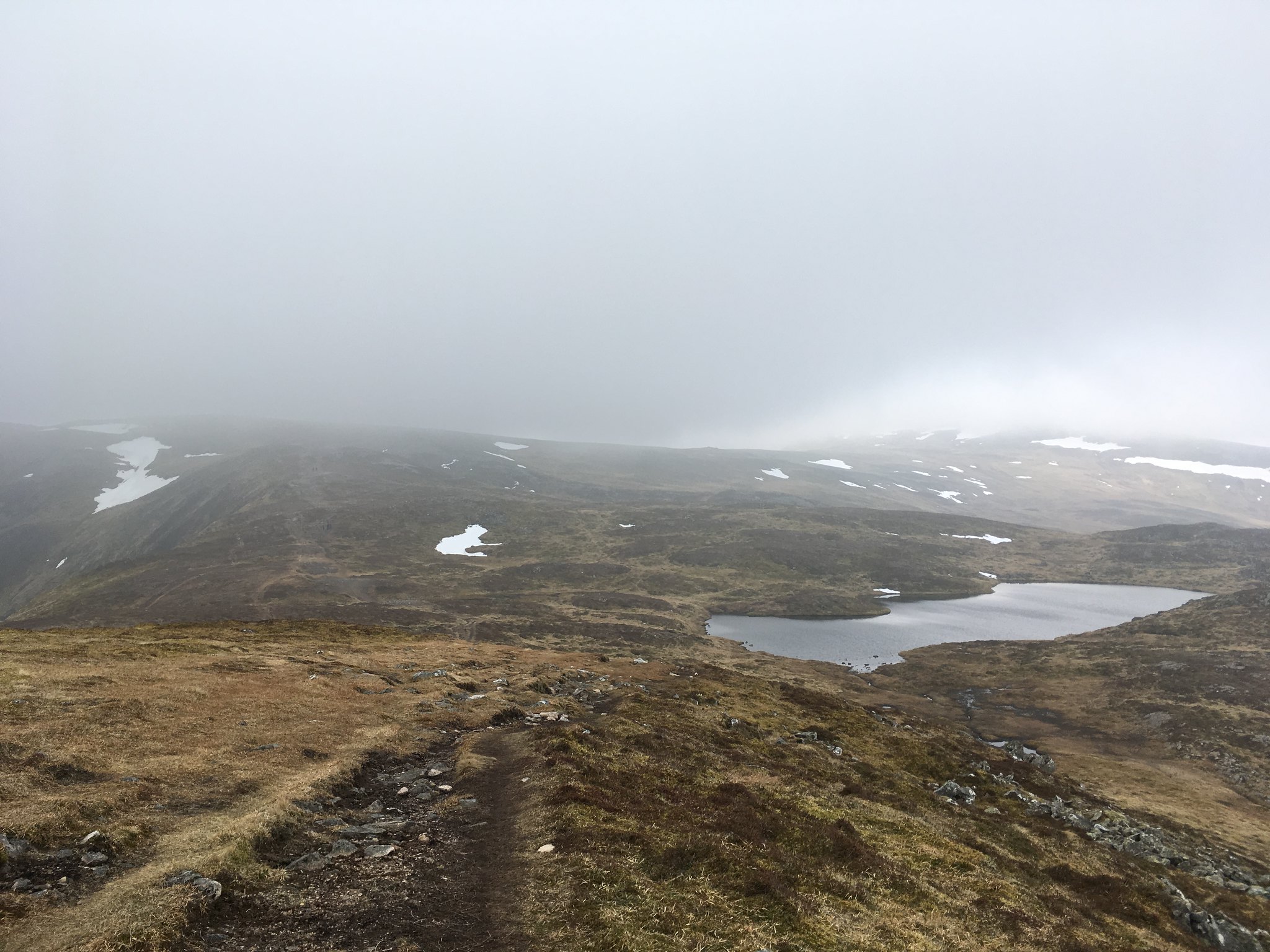 Roughly an hour after leaving Carn Aosda I finally arrived at the summit of Carn a'Gheoidh, just behind a party of four I'd been following...hope the summit pictures I took turned out ok ladies! 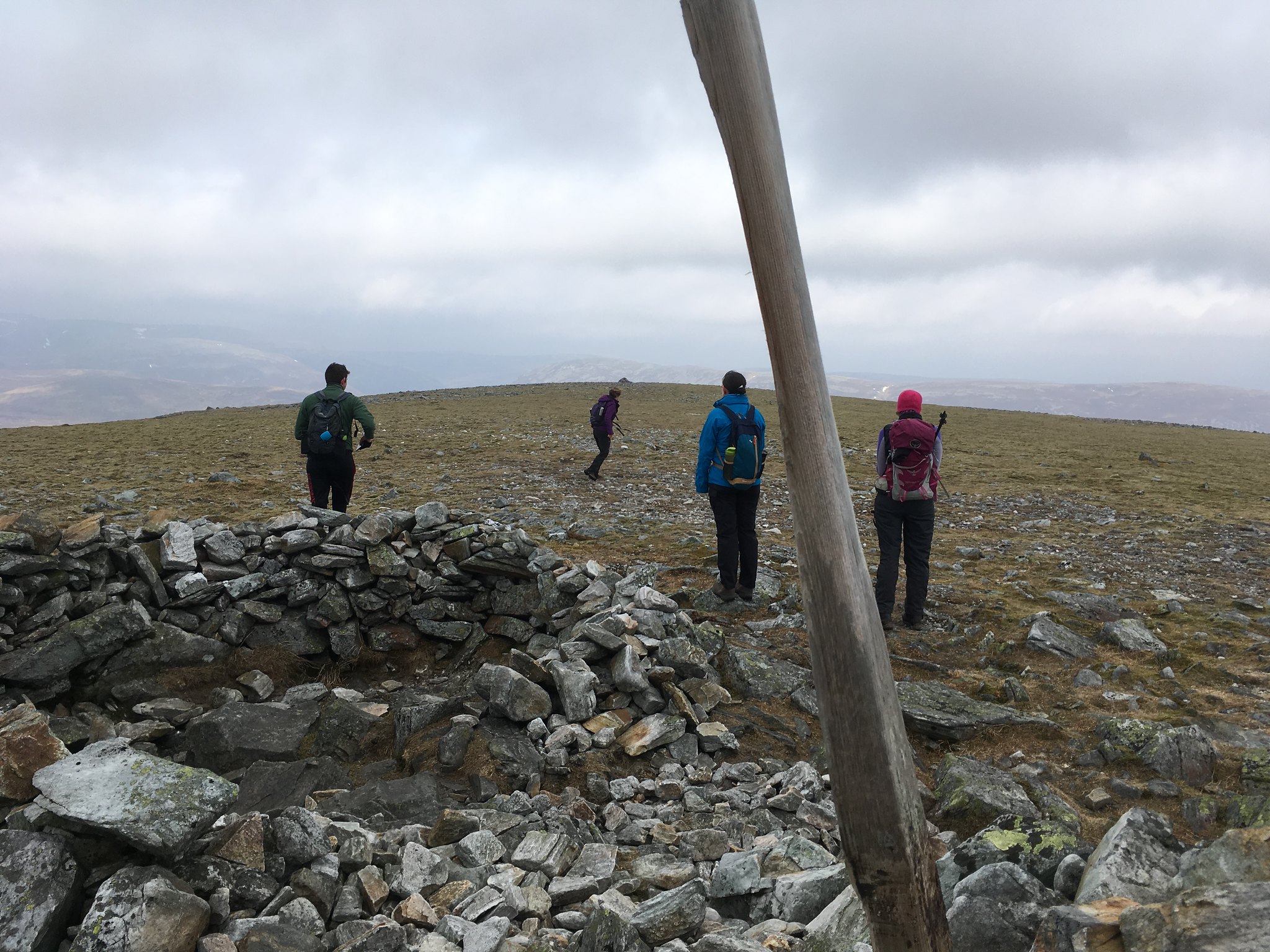 I didn't hang around too long on the summit as their were zero views and a bit of a wind getting up. Time to retrace my steps again and head for The Cairnwell, which was just visible through the clouds. You can't really mistake it for anything else as it looks like an outpost of GCHQ up there! 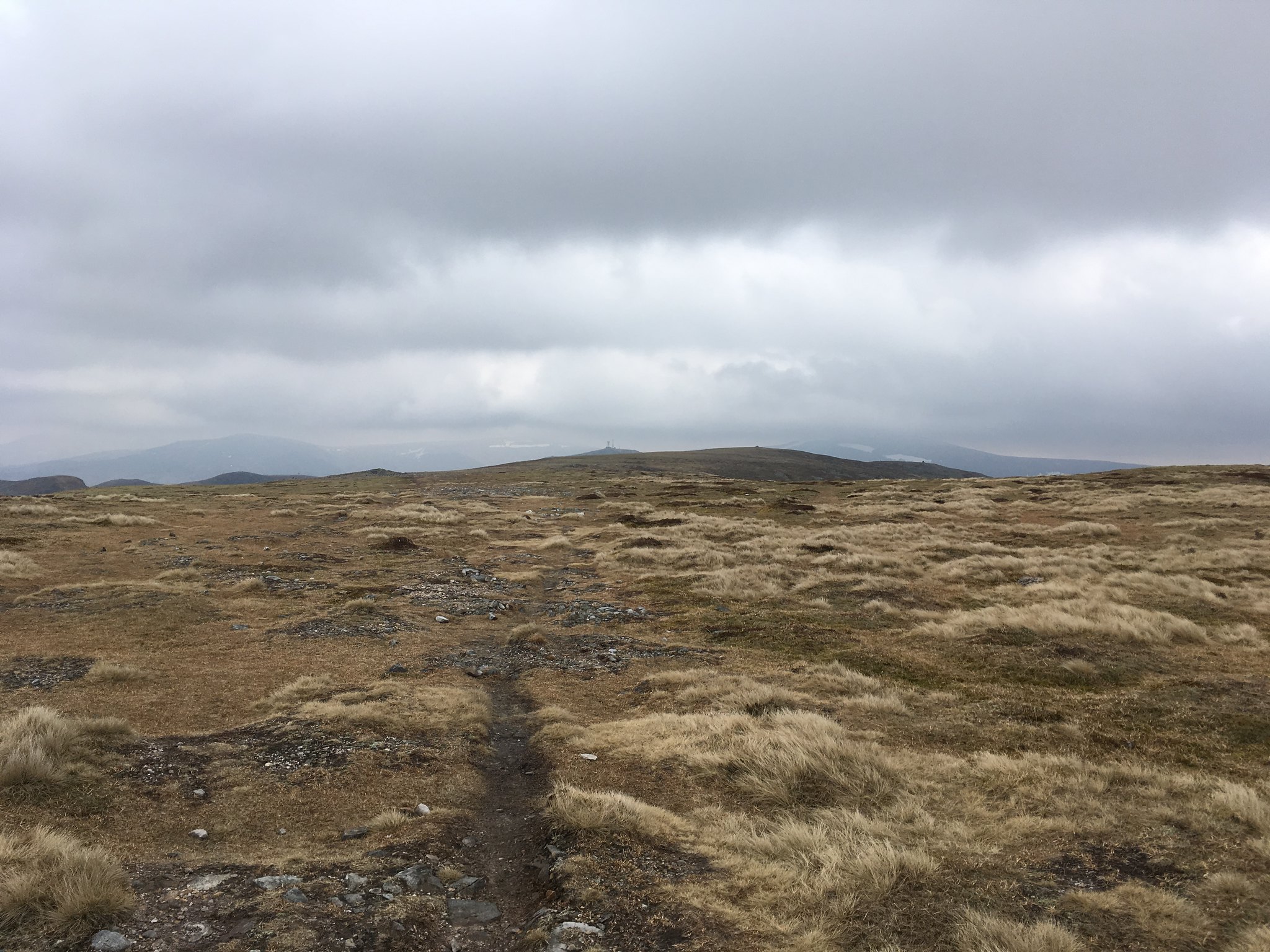 The Cairnwell peeking out in the distance - centre pic

To get to The Cairnwell, it's just a matter of retracing your steps back past the lochans until you arrive at the junction of paths at the "808" mark and heading straight on and up hill to the point marked on the map as "873", where you will join the 4x4 track that takes you all the way up to the summit.

And what a summit! Surely the ugliest of all munro summits? The summit appeared to be a large wooden storage box with stones piled on top, and of course there's the prefab huts and transmitter masts. I don't know what they're transmitting, but it definitely isn't an O2 signal! 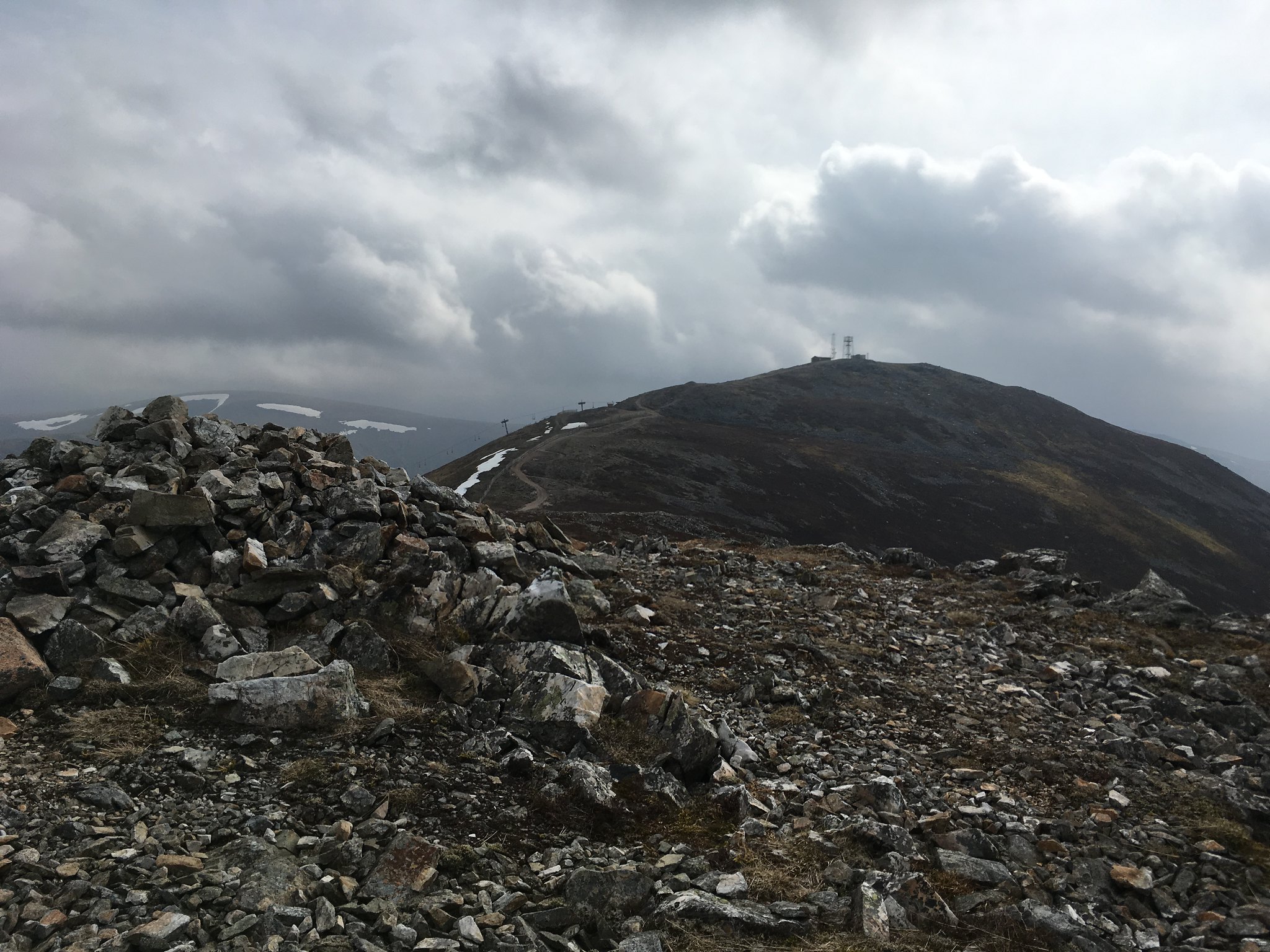 The Cairnwell from the 873 point 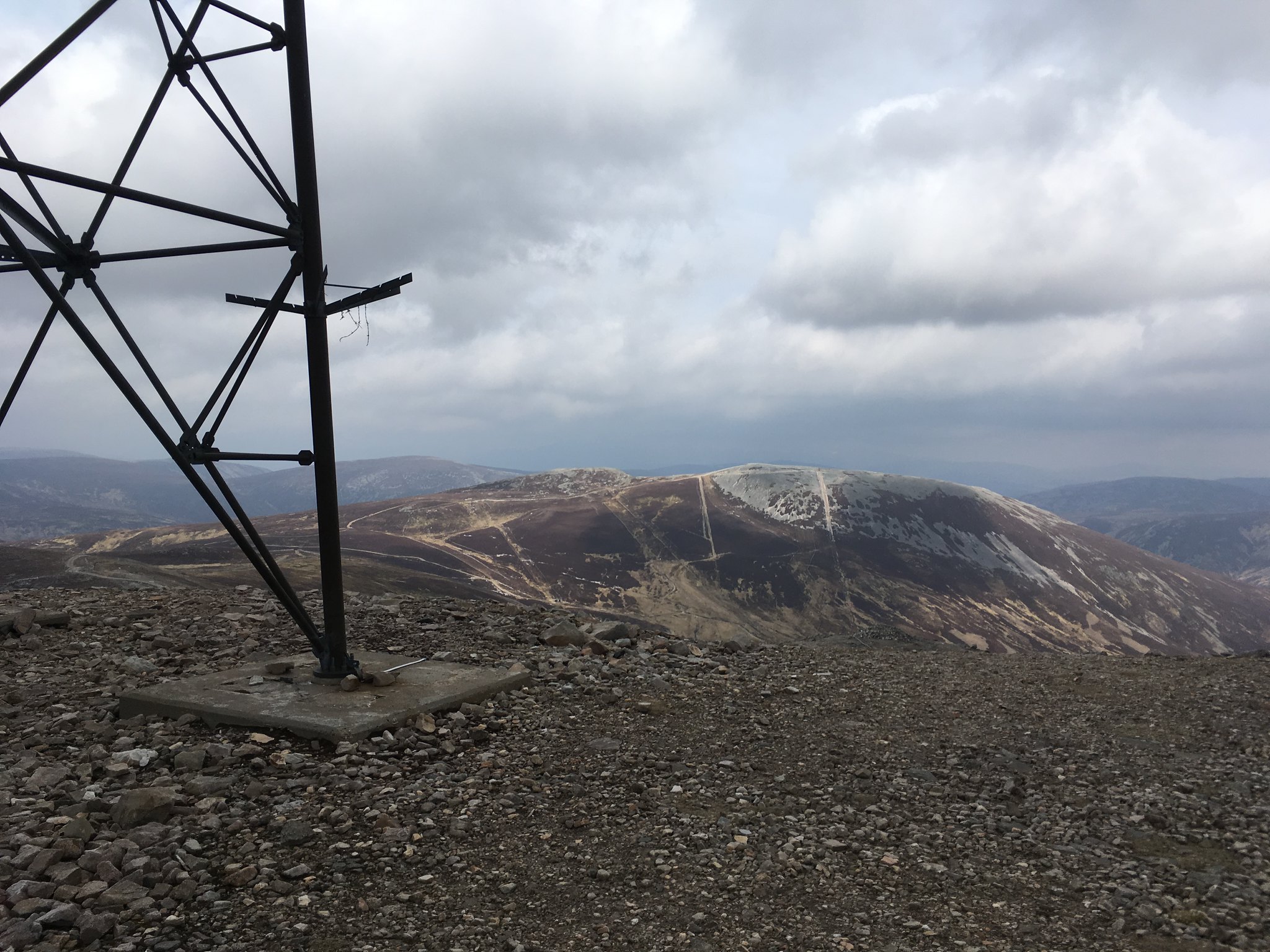 Looking across to Carn Aosda

It had taken me 3 hours to reach my third summit of the day...it kind of felt like cheating really! The WH report suggest following the track all the way round to Loch Vrotachan and going down the track you initially came up, but I couldn't see any good reason not to just head straight down the line of the ski lifts back to the car park...so that's what I did, and was ordering my coffee within 20 minutes.

Finally, if you're the girl who lost her hat going up the Cairnwell lift...I had a good look but couldn't find it. Sorry!