You've no doubt read the lists: top ten of this, worst ten of that, and ten other things you ought to put on your bucket list. The one about memorable roads is one of my favourites: Route 66, the Pacific Coast Highway, that one in Australia that slices through the outback, those high mountain passes crossing the Alps, and now there's our own North Coast 500 as well.

But there's a drive that's missing from them all. For adrenaline-pumping exhilaration, attention grabbing concentration, for sheer intensity, there's a short stretch of road that you'll never forget if you make the white-knuckle drive.

It's only fourteen miles long and takes about forty minutes to drive; and I mean drive. It's not one of those stretches where you switch on cruise control and revel in the scenery. Neither does it allow you to experience the g-force pull of taking long sweeping curves with your foot to the floor - top down and with your hair trailing in your slipstream.

Some would argue that it goes nowhere, others that it reaches the ultimate destination. Some would claim that its surface barely qualifies it to bear the status of 'road,' others might revel in in the way some of the bridges appear shoogly at best.

For those who have driven out from Spean Bridge and beyond Achnacarry to the edge of Knoydart, you'll be familiar with the gut-wrenching bewilderment and stomach churning confusion as the tarmac simply appears to - disappear. Well, I say tarmac, but ... At times there isn't as much smooth black stuff as you'd like. Stretches of gravel hyphenate the road, leaving it like the dashes used by the Ordnance Survey to depict footpaths on their maps. Gravel implies something small, granulated and that rattles on the underside of your car as it speeds along. This road does big gravel, more like stones really, that go clunk as you fear for your sump, exhaust or suspension. There are grooves scored in the surface by those who have hit a hollow with a tad too much speed: will you be next?

Blind summits leave you wondering if any more road exists, and if it does, in which direction it is likely to point. Once your bonnet drops to give sufficient reassurance that the road does actually continue, you're likely to be faced with a tight, blind bend, a bank of tousled bracken, or an on-coming car.

Because, of course, it's a single track road as well.

But, I'd better remember that this is for a hillwalking readership rather than a petrolhead audience. That trip along the northern shore of Loch Arkaig is a means to an end, not just a motoring escapade for its own sake.

A misty Sgurr Thuilm greets me after the spectacular drive alongside Loch Arkaig - and the car park's almost full!

At the end of the drive you get the bonus of being able to select from a clutch of magnificent mountains.

And if, like me, you had already chosen Sgurr Mor, squatting above the adjacent Glen Kingie, then there's another switchback roller-coaster to be faced. Unfortunately you won't have the engine of a car to power you along: this one's all down to you, leg and lung power all the way, with a dose of mind-over-matter as the day's walk comes to an end. 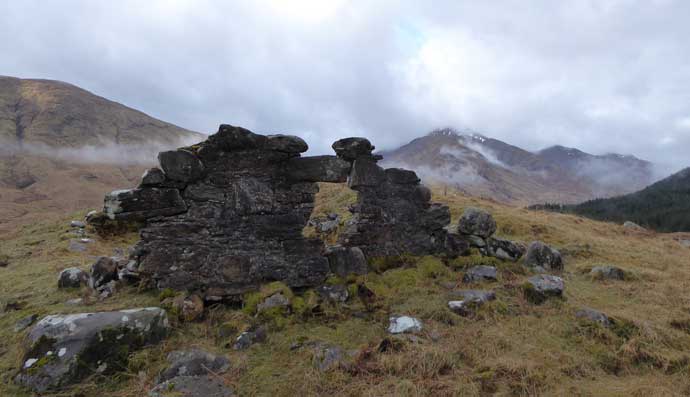 A draughty posting the 18th century redcoats dodging the Jacobites

OK, that's adding on the Corbett Sgurr an Fhuarain as well, but once you're out there in the back of nearly beyond, it constitutes a very minor, but worthwhile diversion. Just imagine, in years to come and you've nearly finished a round of Corbetts, and one of the lingering, stubborn unticked summits is Sgurr an Fhuarain. You'd be kicking yourself for that cussed laziness in your youth. It was only over there. Spitting distance. And it wasn't as if you were pushed for time.

It's not an easy day, and at times it can feel dispiriting. If the River Kingie is in spate, you might also add "frustrating" as you plod ever westwards in an attempt to retain dry feet.

Glen Dessary Lodge and the slopes to Feith a Chicheanais

Before that watery challenge, the day starts with the pull over the Feith a Chicheanais from Glen Dessary. After the gravel track leads easily to the farm below Dessary Lodge, this can be a boggy trudge. Once at the watershed, finding anything remotely resembling a path on the way down into Glen Kingie could be more by luck than good judgment - but hey, we're out on the edge of beyond, what do you expect. Get real, this is supposed to be wild. Once over the tumbling River Kingie, it's just up.

Get over it and get on with it. 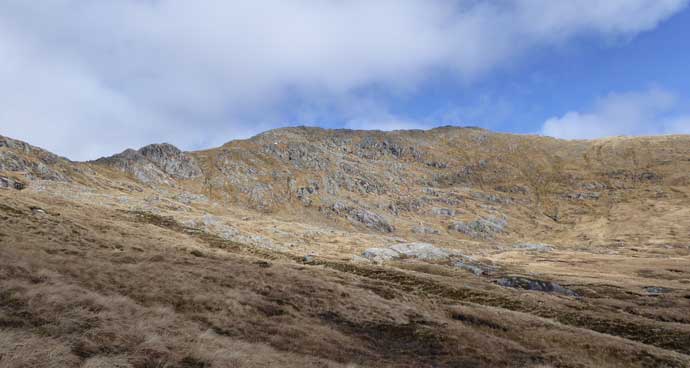 Up the slope of Cadha Riabhach to Sgurr Mor 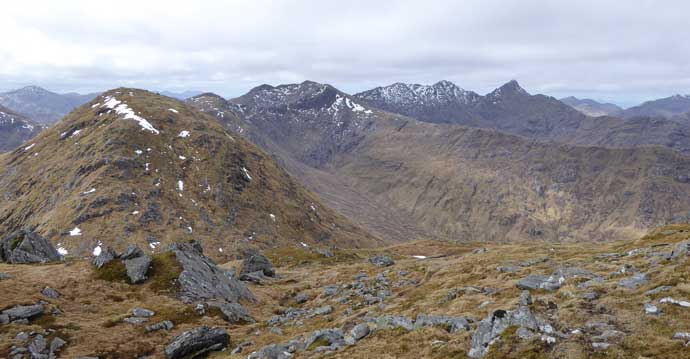 You'll know when you're there: then just turn right and go over as many bumps as the depth of the swelling waters of the River Kingie has forced you to take. If it's really wet, then you'll have been over Sgurr Beag as well. If it's just damp, you could head straight for the back of Cadha Riabach like I did. And if it's been bone dry for weeks, you could end up on the open saddle between Sgurr Mor and Sgurr an Fhuarain - in which case you'd have turned left instead of right. Whichever way you choose, the final few zig-zags and twists to the top remind you of the road at the beginning of the day: where on earth is it going now? Loch Quoich from the summit cairn of Sgurr Mor

Reassuringly, there's no wandering round on the top wondering which the true summit is. It's there and it's obvious and a big pile of stones. But you won't notice much of them because you'll be too enthralled with the views: south west to the pyramid of Sgurr na Ciche, west into the complex ridges and horizons of Knoydart, north over the steel-blue crescent of Loch Quoich and across Kintail, east along the benign ridge to the Corbett of Sgurr an Fhurain and then Gairich. 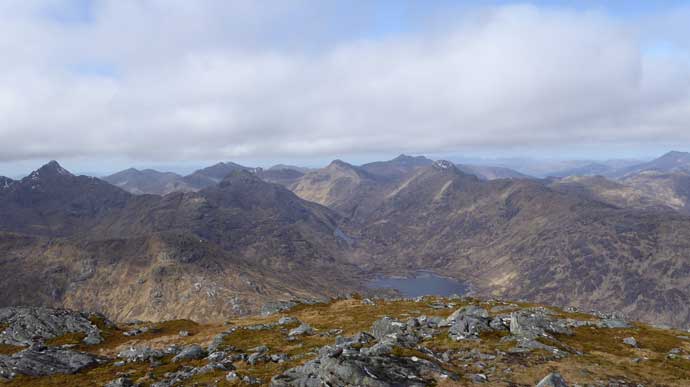 So much to see: so much to do.

Once you've convinced yourself it's a good idea to trot along to Sgurr an Fhuarain, just amble over there and perch by the concrete trig point to enjoy the view across Loch Quoich. Recharge the batteries, take a rest and come to terms with the fact that it's still a long way back to the end of the road in the adjacent glen.

Looking back to Sgurr Mor from Sgurr an Fhuarain From the top of Sgurr an Fhuarain take some time to look across at the choices to be made on that return journey. Do you head downstream towards the bothy where the Tomdoun track comes over from Glen Dessary, or do you retrace your outbound steps back over the Feith a Chicheanais. One watershed is a hundred metres lower than the other so, as unattractive as the western option looks, it's a no-brainer.

Back down into the Glen you'll have another wander up and down to find an easy crossing, then begin the dispiriting climb back over to Glen Dessary. It might only be about five hundred feet, but seemed to go on forever.

Another search for a dry crossing over the River Kingie 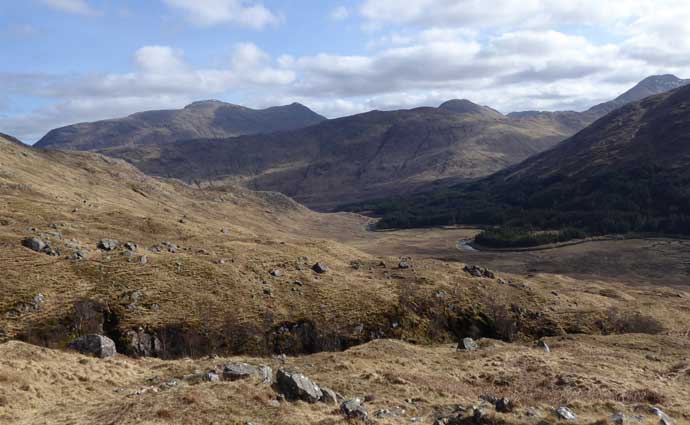 But, I had that exciting drive to look forward to. It helped overcome the tiring legs and aching feet, especially when I finally arrived at the gravel track and knew there was still another two or three kilometres to go.

It was the beginning of April, and a quarter of the year had already gone. All I've done in the first three months of the year are three Corbetts and a snatched Lakeland Wainwright on the way back from a recent trip to Yorkshire. This had been the latest I'd been on a Munro for almost a decade. 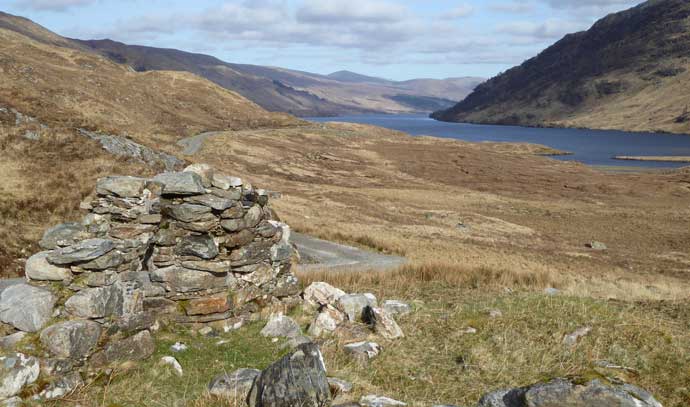 A sight for sore eyes - the final stretch of gravel back to the car, Loch Arkaig and that exhilarating drive back

I was now looking forward to getting back into the swing of things, and as I looked back down Loch Arkaig, it was a valuable reminder to me that visiting all these Munros is a great way to see parts of Scotland I wouldn't otherwise have enjoyed.

Now, what about those other Corbetts alongside Loch Arkaig so I can enjoy that drive again?

Still to do the Arkaig Munros and we're dreading that road. Every time this area is on the radar, we try to find excuses to go somewhere else - has worked so far for 10 years!

The route looks (and sounds) hardcore but that only whetted my appetite! Bring on a good summer...

BlackPanther wrote:Every driver's nightmare - the B8005

Still to do the Arkaig Munros and we're dreading that road. Every time this area is on the radar, we try to find excuses to go somewhere else - has worked so far for 10 years!

The route looks (and sounds) hardcore but that only whetted my appetite! Bring on a good summer...

A few years ago there was quite a bit of work getting done on the road for the forestry operations. However I think that the increased traffic may have been detrimental to the overall quality.
Its not as bad as its portrayed though and a sensible attitude will get you along there safely.

Wonderful and can't wait to go - whenever I can summon the will to do the road!

You should think yourself lucky, I was "fortunate" enough to drive along that road twice in 2 days, day one did the 3 Munro's and it really did take it out of me

I would definitely return and visit all 4 Munro's, even though Pauline and I both said never again, maybe time has erased the road trepidation

But it does look like it would be worth it

Your description of that drive made me laugh, then the memory of it came back. It was the reason my planned walk that day was extended somewhat so I could add on one extra hill, to avoid a return drive. The extra one was a bit of a hill too far

I was stood on the summit of Gairich just 3 weeks back thinking i've the joys of the B8005 to come again soon to get these 2 done. I also had a little chuckle to myself about our 'accidental' Corbett inclusion when we were there 2 summers ago for Sgurr Na Ciche & pals. Good to see there was none of that silliness this time.