It’s been 3 years since I last wrote a trip report, in March 2014, of a walk up Gairich which almost ended badly thanks to me slipping on slushy snow and grass https://www.walkhighlands.co.uk/Forum/viewtopic.php?f=9&t=40553. I was lucky enough to win the monthly Walkhighlands trip report competition then, so I’m not sure why it didn’t inspire me to write more reports!

Since that time, I’ve completed my Munros – and then started doing them again (I know, what a lack of imagination!) and also started to look out for Corbetts. So when I was researching Carn Ban last month, I was surprised at the lack of trip reports for the Alladale approach and that has spurred me into action, though admittedly it’s taken me 3 weeks after the walk to do it. Hope it helps others with their planning. It ended up taking us 8.5 hours but it was the first day of our holiday and we were quite weary so didn’t push the pace, and we also lounged around a bit on our breaks as the weather was so good.

It’s 9 years since Malc & I had been in this area, doing a fab cycle trip from Ardgay station via Croich church to Ullapool on offroad tracks with a wild camp in the middle. That had been the most amazing trip and the start of a 2-week cycle tour from Ullapool to Thurso/John O’Groats (which is now mostly the NC500 and probably too busy with vehicles for an enjoyable cycle). I’d never actually been on Alladale estate, though for years I'd read various reports about their wolf reintroduction plans so I was curious about what it would be like. In fact I was totally unprepared for how beautiful it is - stunning landscape and ancient Caledonian pinewoods, lots of new trees coming through. Mind you, with the sun shining from a cloudless sky, I challenge anywhere in Scotland not to look gorgeous on a day like that.

We parked at the end of the public road by Glencalvie estate, the temperature was just above zero. We got on to the bikes by 9am to follow the Walkhighlands route and soon warmed up as there's a big hill early on. 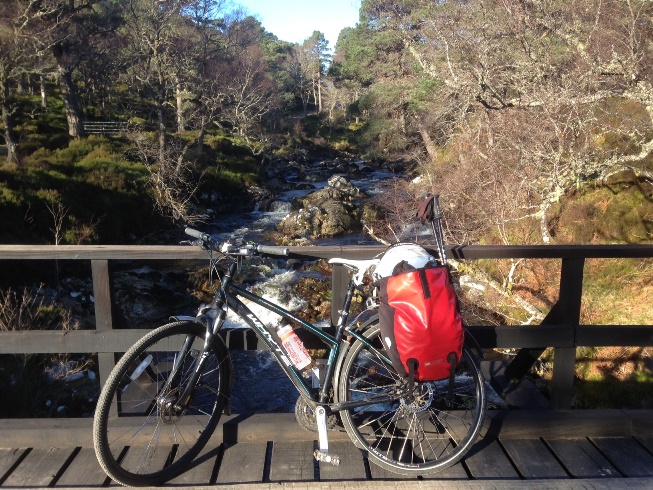 Setting off through the pinewoods

It’s a 9-mile cycle down Gleann Mor to the bridge after Deanich lodge where you enter Gleann Beag. Mostly the road is in good condition, and relatively flat, just a few ups and downs. There’s a number of fenced enclosures – possibly for wild boar? – and some extensive native tree planting which is already beginning to change the character of the glen in a very interesting way. Lots of birdlife as we cycled through, feeling that we were getting into more and more remote country. We never saw a soul all day. 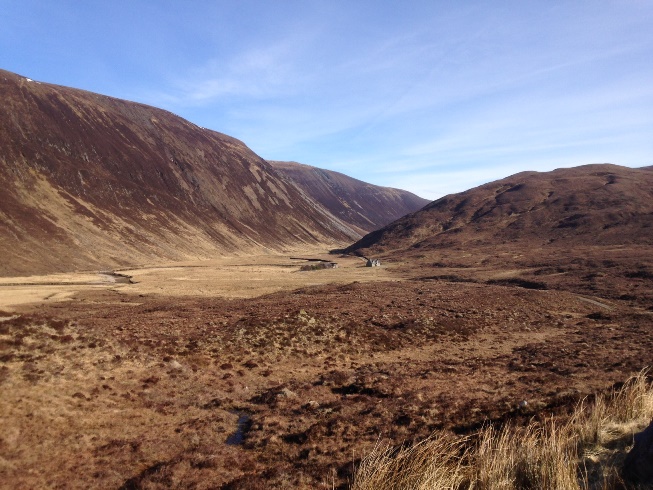 After the bridge was reached we had an early lunch break and then continued on foot along the road to finally climb up the side of the glen just before a hydro scheme and weir. It was a fairly steep pull up, and really hot in the sun on a southerly slope, but the views were getting better and better. 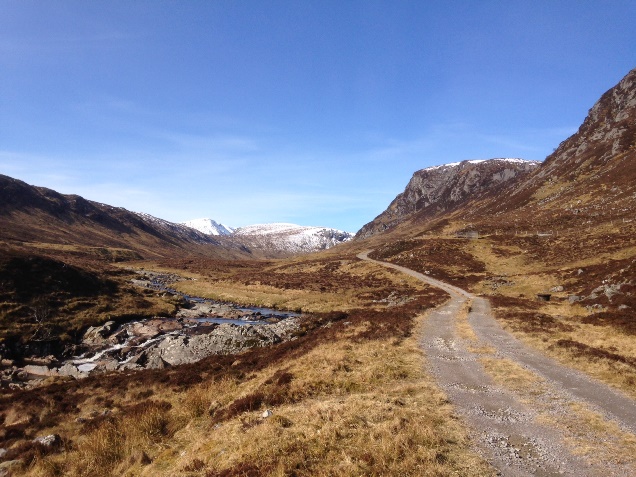 Setting off on foot down Gleann Beag, Cona Mheall in the distance First was Cona Mheall and Am Faochagach then Beinn Dearg (with its wall) and Meall nan Ceapraichean, and Eididh nan Clach Geala … and then finally Seana Bhraigh, all touched with snow and looking amazing, bringing back lots of memories. Looking back to Beinn Dearg and the Fannaichs

By this time we’d passed Loch Sruban Mora and were heading up the first top. Fortunately most of the snow had gone underfoot but there were plenty of drifts which meant a meandering route. Carn Ban summit looked an awfully long way away but the views had opened out all around and our heads swivelled all the way along the ridge. Across Seana Bhraigh to the hills of Assynt

To the west as well as those already mentioned we had all the Assynt hills laid out in front of us, plus the Summer Isles and Outer Hebrides. To the north, Ben Klibreck and Ben Loyal stood out. To the south the Fannichs and even An Teallach peeping through, and to the east Ben Wyvis. By this time it was slightly hazy but I really think we were seeing the sea on both sides of the country, it was utterly fantastic, such a sense of space and peacefulness! 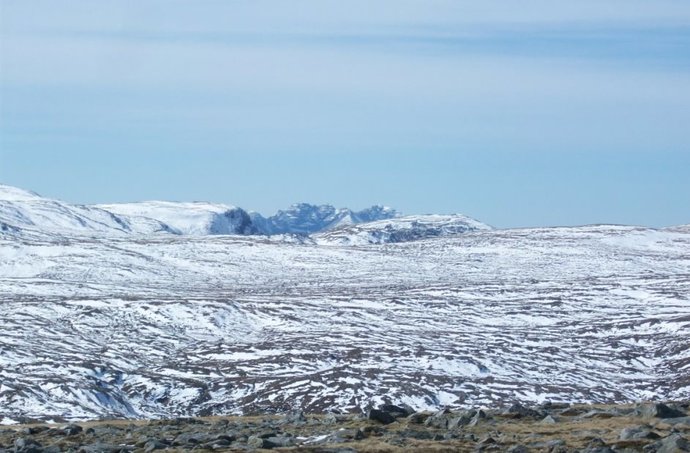 An Teallach peeping through behind Beinn Dearg Malc walking along the summit, looking to Assynt 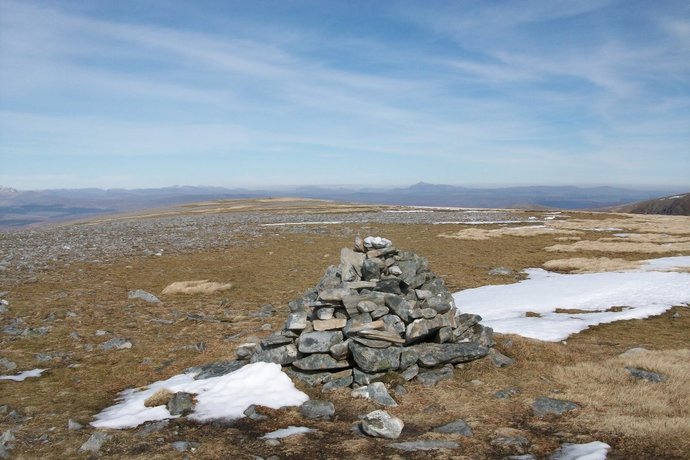 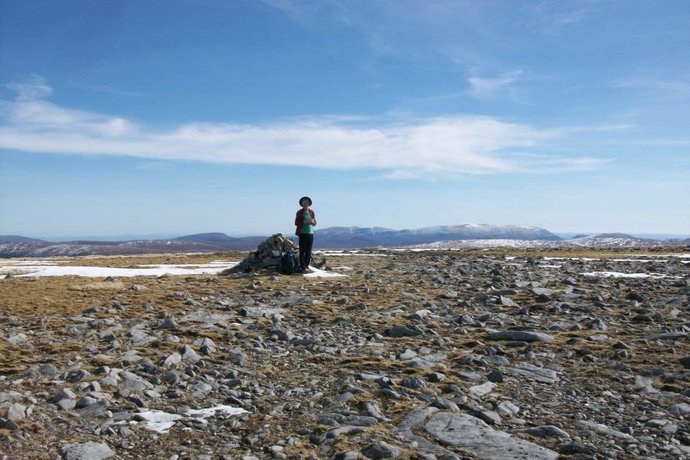 We decided just to head back to the bikes from the summit, but this ended up taking a fair bit longer than hoped due to lots of soft snow drifts and peat hags to plough through on this north east side of the hill above Coire na Feithe Riabhaich. Because it was so hot I wasn't wearing gaiters and got loads of snow inside the boots. Finally, we luckily picked up the stalkers’ path which zig zags down the side of the glen beside a hydro scheme to where we’d left the bikes. 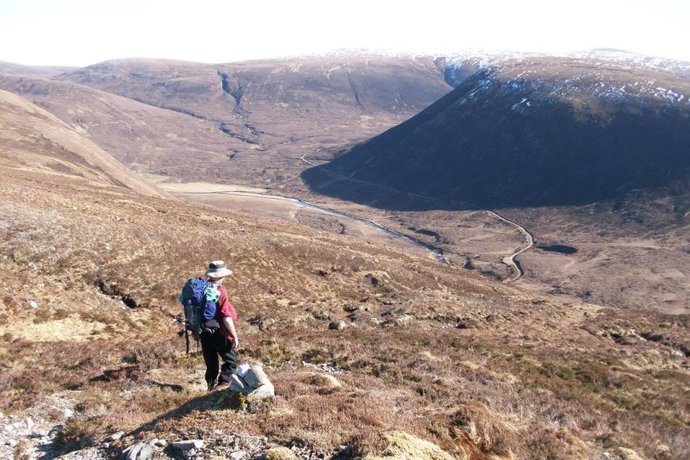 Back down the stalkers' path to the bikes

Back on the saddle and then a mostly downhill ride all the way back to the car for 17.30. We’d had a stunning, blue sky day in really remote country right in the centre of Scotland, and had the hill all totally to ourselves. A great start to our holiday!

Re: Clear skies on Carn Ban

That looks fab.... but you really do need a bike and that I don't have.

Good to see you back on here again!

Re: Clear skies on Carn Ban

dogplodder wrote:That looks fab.... but you really do need a bike and that I don't have.

Good to see you back on here again!

It would definitely be a long walk - but don't you have form on long walks in? I seem to remember having a chuckle when reading about your trip to the eastern Fannichs a few years ago,