Meall nan Subh, must be the shortest Corbett ever

Meall nan Subh, must be the shortest Corbett ever


After painting the house all weekend thought I'd deserved a day on the hill and this Monday promised to be fine so an early get a way at 6.30 am got me up to the first goal of the day Meall nan Subh. Instead of driving the long road up Glen Lyon I decided to go through Kenmore and then take the high road up to Ben Lawers and over to Glen Lyon. The final section from the dam to my starting point is first gear stuff if you don't want to break the springs on your car. Stopped at a parking area on the West side of the road at the high point where there is a pile of stones in the car park, booted up ready for the off by 9.10 am The view from the car park up the first part of the climb. Underfoot conditions fine not too wet. Starting height approx 450 m Looking over West towards the Munro Beinn Heasgarnich 1076 m Same view higher up the climb 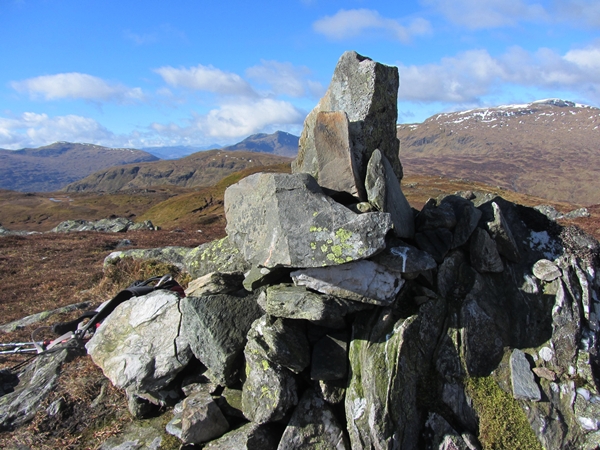 Me at the summit looking NW It took me 48 mins to the summit so this is a fine wee hill with grand views and must be the quickest ascent of a Corbett I have done, I just returned near enough the same way with a slight deviation Thought I would treat myself to a coffee and fruit scone with trimmings from the Glen Lyon Post Office, store and caf'e, it sure went down a treat and set me up for the next Corbett just up the road. Highly recommended stop off place, I like to support the locals whenever I can and will return. This wee fella wanted a share of the scone The exterior of the Glen Lyon facilities

I was amazed at your time for this walk Rod, then I realised I did it from Glen Lochay. Not the most exciting hill in the world but I enjoyed the views from the top.

Gordie12 wrote:I was amazed at your time for this walk Rod, then I realised I did it from Glen Lochay. Not the most exciting hill in the world but I enjoyed the views from the top.

As I had another Glen Lyon Corbett to do I did it from the North, the road is pretty rough in places especially the first section just after the bridge crossing, first gear stuff, but improves later on.

Nice one Rod. Good wee café that in an idyllic spot. Great soup and sandwich too.

Sunset tripper wrote:Nice one Rod. Good wee café that in an idyllic spot. Great soup and sandwich too.

I like to support the wee locals when they deserve it, I might try the soup the next time

Can you drive up glen Lochay and do the corbett or is it better approached from glen Lyon side?

anthonyrjackson10 wrote:Can you drive up glen Lochay and do the corbett or is it better approached from glen Lyon side?

Hi Anthony, I drove up that way after doing another hill it's quite a long way then reached the farm at the far end where there is a sign no vehicles beyond this point, it looks rather new. I was short of time and did not want to walk from the road near the farm the intention was to go as high as possible on the road to Glen Lyon. On my way back down the road I met a farmer guy and asked him re access and he said it was still ok to go beyond the farm, as I was nearly at the main road I decided to leave for another day. I therefore cannot comment on the road condition. There were certain sections I was in first gear coming over from Glen Isla, hope this helps.

anthonyrjackson10 wrote:Can you drive up glen Lochay and do the corbett or is it better approached from glen Lyon side?

I had this very question earlier in the year. The short answer is yes. It's doable.

First had a look at access from Glen Lochay in March this year when I happened to be to be up in Killin. At that time, I'd seen the Private Road signage near Kenknock and noted the presence of 2 gates half a kilometre or so beyond that. The gates mark the southerly end of the minor road/track that leads north to the power station and Pubil. Between the signage and the gates, the area didn't feel particularly walker friendly and I left it at that.

However in May I revisited the idea. I'd knocked off the 2 Corbetts to the west of Loch an Daimh and was keen to tackle Meall nan Subh at the same time. I'd seen The Rodmeister's report and used his Glen Lyon access suggestion to leave the car at the high point of the road/track we're talking about. The shortest route home thereafter was southwards to Kenknock and then east to Killin. Returning via the Bridge of Balgie was substantially longer.

The road/track proved driveable with care - the odd large pothole, narrow in parts and quite twisty but certainly no worse the upper part I'd left behind. The gates had drawbolts but no padlocks. Passed some workers at Kenknock a few minutes later. They smiled and waved so don't assume any upset there. Hope that helps.