With winter this year having been a bit of a disappointment, I was already starting to hope for better next time round. But when I saw a decent amount of snow was due to come down on Tuesday (March 21), my hopes were raised. And they were raised even further when I saw the forecast for the following two days. So with a couple days off work to take, I set about planning a last minute trip and decided on Stob Ghabhar.

The WalkHighlands route includes the neighbouring Stob a'Choire Odhair, before cutting across and then up a steep north face onto Aonach Eagach and then onto Stob Ghabhar. However, with the avalanche forecast as considerable on north and north-east faces I decided to follow the route in reverse and leave out the second Munro. So parking at Victoria Bridge, I would make my way along the path before crossing the river and bearing left, as shown by the grey line and miss out the red line. 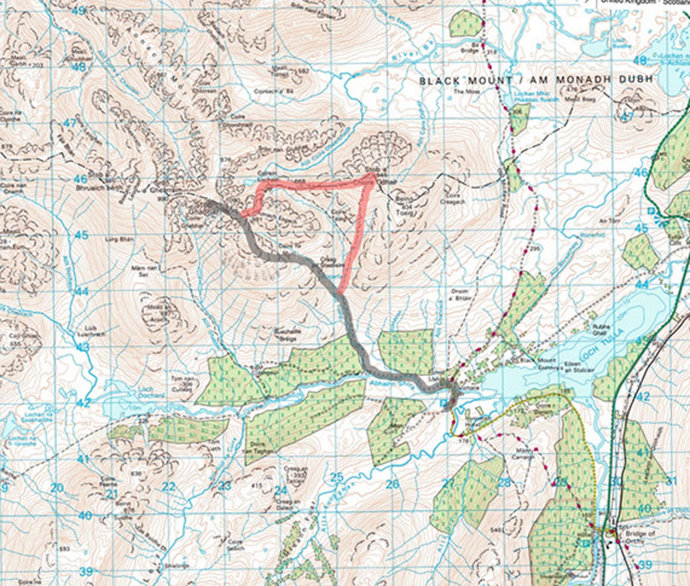 Having looked at the map I decided a good place to camp would be where I have circled in red, a flat bit of land with a lochan and stream next to it for fresh water. I would then just need to follow the ridge up to the summit and back down again after sunset. This was slightly lower than I would normally like to camp, leaving around 500m of ascent, but felt like the best bet. 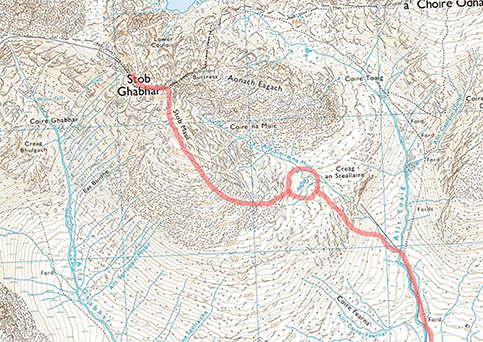 The walk in was very pleasant and included watching a herd of deer cross the river Abhainn Shira, which flows down into Loch Tulla. I eventually left the path to bear left and managed to cross the stream without getting my feet wet, leaving a fairly short but steep climb up past a beautiful waterfall to Coire na Muic. The camp spot (around 570m) was just right so I got set up and at about 3.45pm I decided to start making my way up to the top. 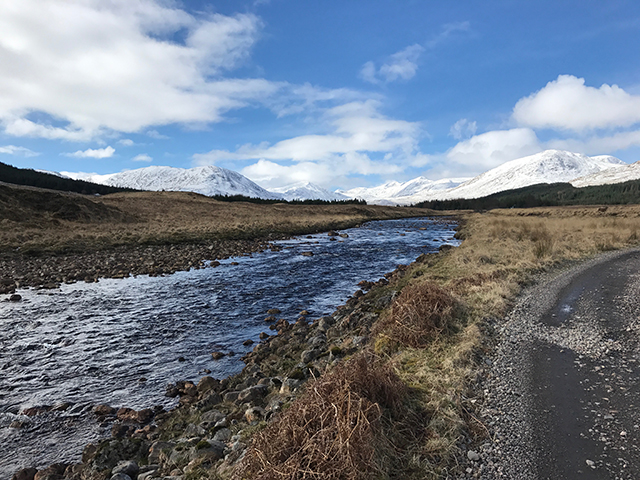 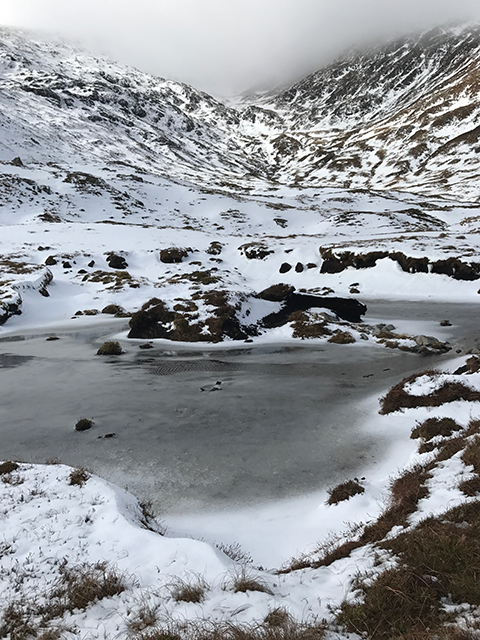 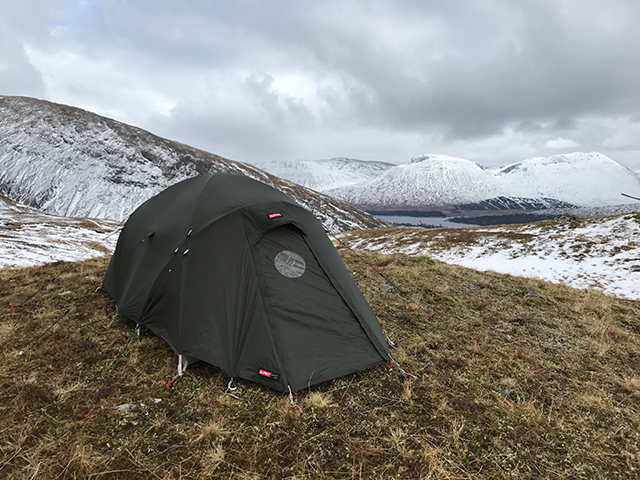 The walk up was a bit slow, I had played football the night before and coupled with carrying a 20kg bag my legs already felt quite sluggish. The snow was quite soft, so easy enough to walk in, but what caught me by surprise was the strength of the wind . It had been forecast to be only 15-20mph, but was starting to feel much stronger and coupled with the fact the top of Stob Ghabhar was covered in cloud I started to think about abandoning the top for sunset and returning for sunrise. Above me you could see the spindrift was really starting to pick up so I took a few images where I was and began to think about returning to the tent. 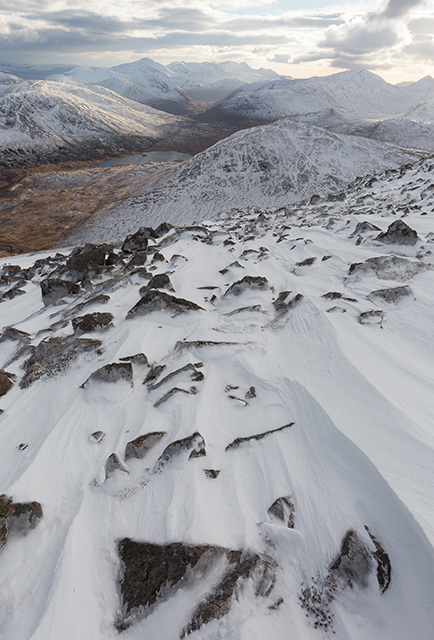 However feeling torn about what to do, I decided to go up a bit further just to see what it was like. As I did the clag on top began to clear slightly so again I went up a bit further. The clouds also seemed like they had potential for a nice sunset so eventually I decided just to go for it and thought if I can get something half decent now then it would save me the walk up in the dark the next morning. By now the wind was very strong though, unbalancing me at times, and along with the soft snow made for slow going. But I was rewarded with spectacular views the higher I got, such as this one across to the imposing figure of Ben Nevis. 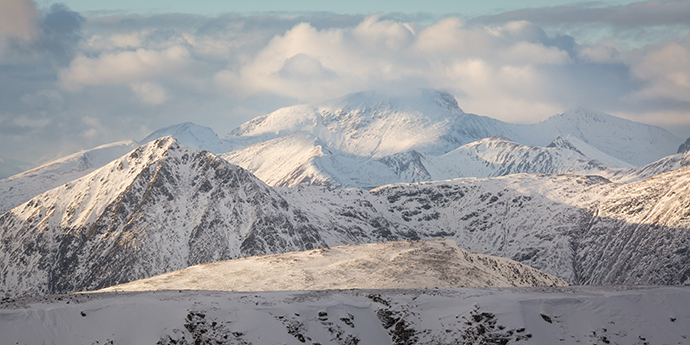 Time was pressing on and I could see the best light was going to be close. Eventually I reached the top and there followed about 45 minutes of strong winds, wild spindrift and amazing light which all combined to make some spectacular conditions. Taking pictures proved far from easy though as my goggles had started to steam up but I was unable to open my eyes without them on. Then for some reason my auto focus started cutting in and out and the shutter button began to freeze! It all made for a rather frantic experience, desperately trying to make sure I got something usable. But despite all that it was still one of those mountain experiences you dream about and the reason you go through all the pain of getting there.

With the sun eventually descending below the horizon, all that was left was making my way back to camp in the increasing dark. In these conditions this would normally have been a little concerning, but thankfully the route was fairly straight forward just following the ridge back down. With this is mind I tried not to rush and a few times took a break behind some big rocks to get out of the wind for a few minutes. Eventually the sight of the tent was a welcome one and I was quickly in, changed into dry clothes and eating my freeze dried carbonara. Feeling shattered I decided I would stay close to the tent for sunrise and settled down around 9pm. Despite the freezing temperatures I enjoyed a cosy night, only disturbed by the wind, and the next day packed up and was back at the car for around 8.30am.