Starting from. Just North of An Dubh Lochan near Fersit


day 1.gpx Open full screen  NB: Walkhighlands is not responsible for the accuracy of gpx files in users posts

Day 1
Our plan was to do a round of hills east of The Lairig Leacach Bothy, spend the night in the Bothy and head out the next day back towards Fersit.
Thankfully everything went to plan, including the weather, this made for a very enjoyable trip, and all had a great time.
The ridge nearly starts where the car was parked, and once on there is only one-way to go. It’s a long slog before the summit of Stob A Choire Mheadhoin is reached. Along the way the views are pretty good with views of Loch Treig, and the Crags at Meall cian Dearg was a nice way of slowing the walk down. It was now 2.30pm it had taken us about 3 hrs to reach the first summit. Due to the cloud base being about 1000m views were very poor. Wilson looking down the crags The summit of Stob Coire Easain was reached in about an hour from the first Munro. From the Bealach it’s a case of following a line around the coire to meet the ridge for the final climb to the summit. From here we headed North down the ridge with Views of Sgurr Innse straight ahead.
Julie and Wilson decided to head for the Bothy, I was heading for The Corbett. The South East side of this Corbett looked pretty daunting, but several weaknesses were spotted on the way in. Looked like I was going to have some fun here.
Nice views from the summit were had, and every hill of our 2-day trip could be seen from this fine vantage point.
From the summit I retraced my route down to about 700m before heading South West and heading directly for the Bothy. Julie had managed to get a fire going, and had bagged up some dead heather. The heathers burned surprisingly well with the remains of some charred coals in the Auld cast stove. Stob Ban from below Sgurr innse summit ( and the bothy )

We got the Bothy to ourselves that night… Braw …. Sat in front of that auld stove having blether to the wife, several very large Irish coffee’s then several large drams we were both ready for bed near midnight….


day 2.gpx Open full screen  NB: Walkhighlands is not responsible for the accuracy of gpx files in users posts

Come 8am ish we were booted and on our way. Heading for Stob Ban this time. We decided on taking the SW ridge up to the summit, from the summit we headed north before heading NE around the coire edge and making our way back down to the Bothy for breakfast. On a good day the views would be fantastic from Stob Ban, we just had to make do with what we got.

Breakfast cooked and bags packed we decided to head for Corbett no. 2 Cruach Innse we move north up the 4 x 4 track for approx 2km then NNE up the craggier side of the Corbett towards the summit, finding a few scrambly bits as we went. From here we head N for a short spell then drop into the glen Between Cruach Innse and Cnap Cruinn then climb until the ridge is reached. We reached the ridge around the centre point of its length then head for it’s summit. 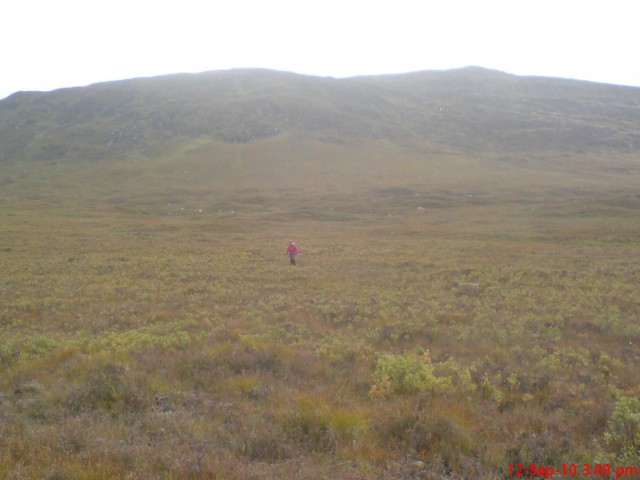 looking back to Cnap Cruinn

From here its all down hill we head East to catch the edge of the forest. We follow the 4 x 4 track until we reach the dam and cross the river at this point. We then join the old dismantled rail line and head for the North end of An Dubh Lochan where the car is parked.

Phew, that looks brilliant! How did Wilson get on with all that walking? I'm looking for walks that I can take my dog along with. She did Mount Keen with me on Sunday but that was pretty easy for her and when the weather is cooler I'm thinking of a 'coat' for her as hers isn't that long and woolly.

. Looks like some nice scrambles possible up Cruach and Sgurr Innse. The weather wasnt bad as well. 3.2.1 indeed