Bum-shuffling on some windy Donalds

Bum-shuffling on some windy Donalds


Pretty sure Monday was a better day, but it was the obligatory “knee rest day” after a big cycle on Sunday, so Tuesday it was. I couldn’t be bothered getting up very early, but with the longer days it didn’t really matter. After an uneventful drive I arrived at the car parking area (or it may have been an oversized passing place) just short of Kirkhope Cleuch and started walking shortly after 10.

I followed a muddy track just before the gate but soon cut through and across the wall and fence as the walking looked easier there. It was more exposed here and the wind was whipping up a storm. I could feel moisture in the air and before long I stopped to add waterproofs. I squished my way through some bogs and across a fence or two and began the climb up to Comb Law, following the fence posts all the way to the unmarked summit.

Looking back it was wet and windy 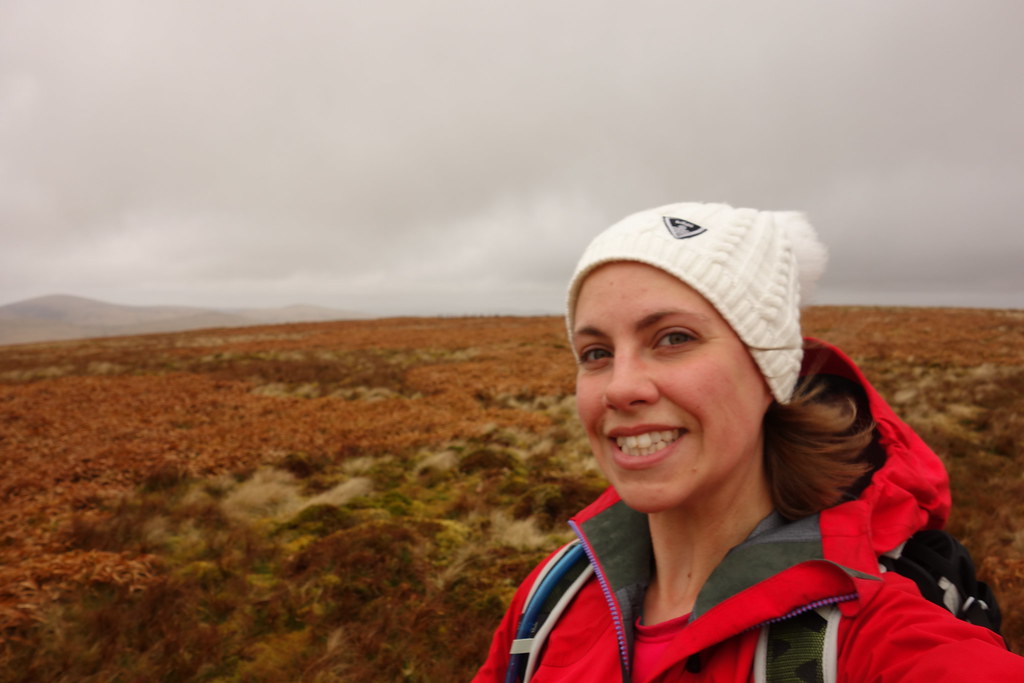 It was very windy (too windy for posing) but I could at least see the way ahead for now. My second summit looked a long way away 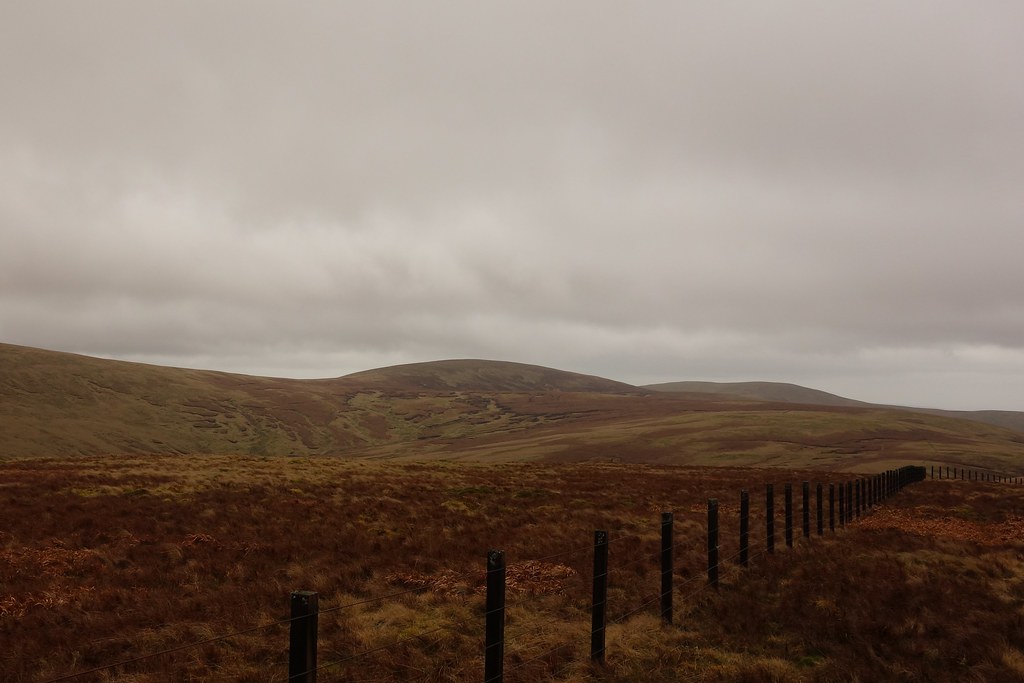 Onwards, I followed the fenceposts over Hirstane Rig, through bog and up to Ballencleuch Law. All the way along it was insanely windy and I was battling against it and trying to hang onto my hat. This summit was at least sort of marked but it was way too blowy to risk my camera for a pose

It had at least stopped raining. 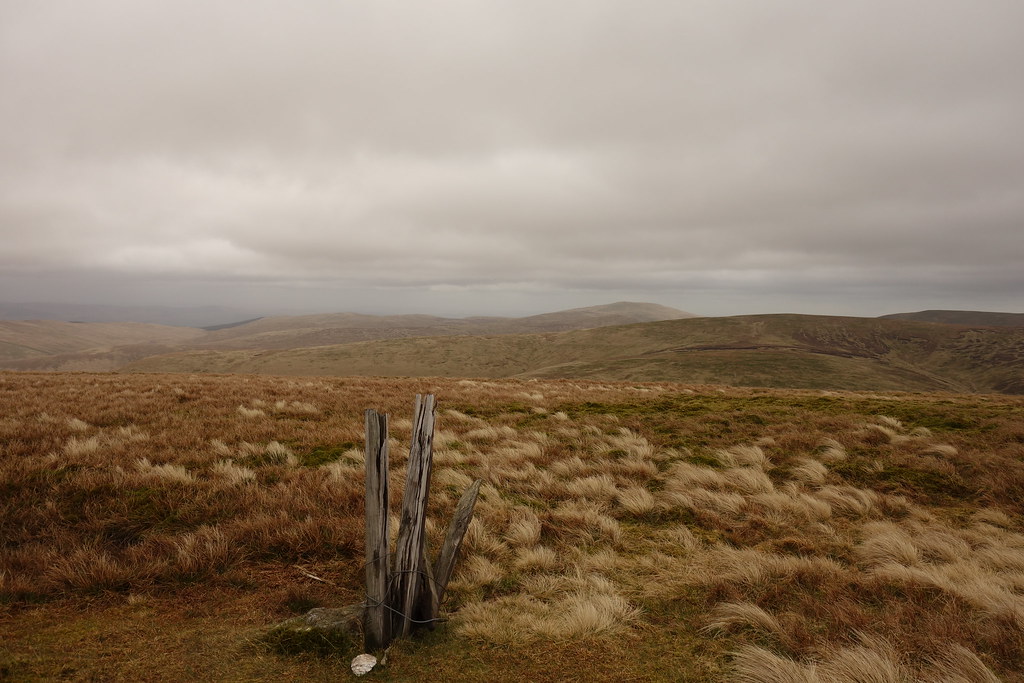 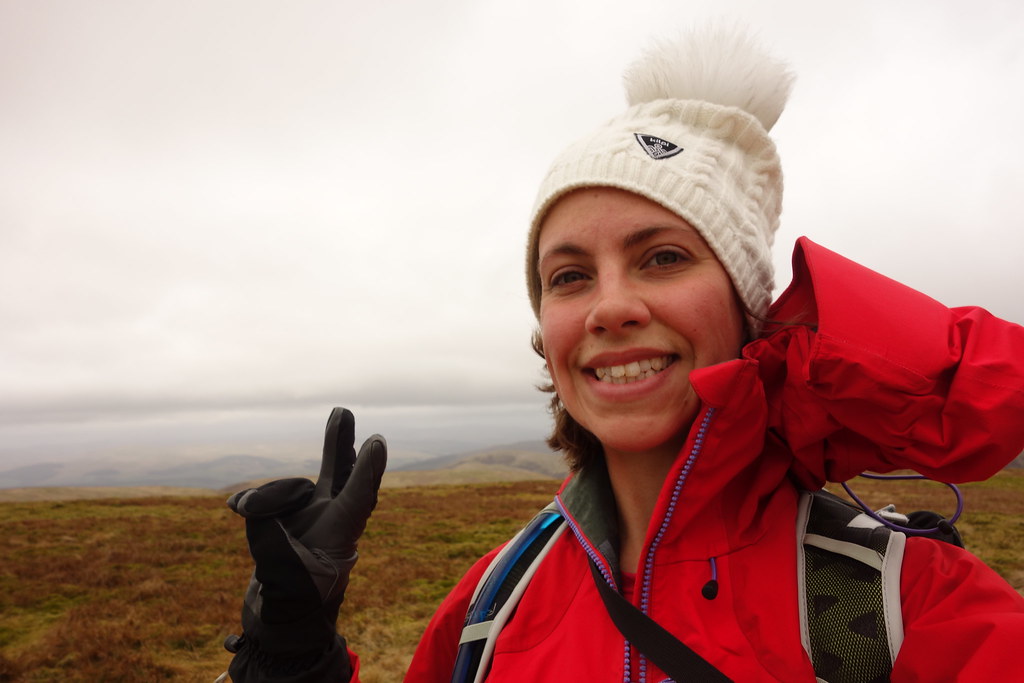 Looking ahead to Skaw’d Law 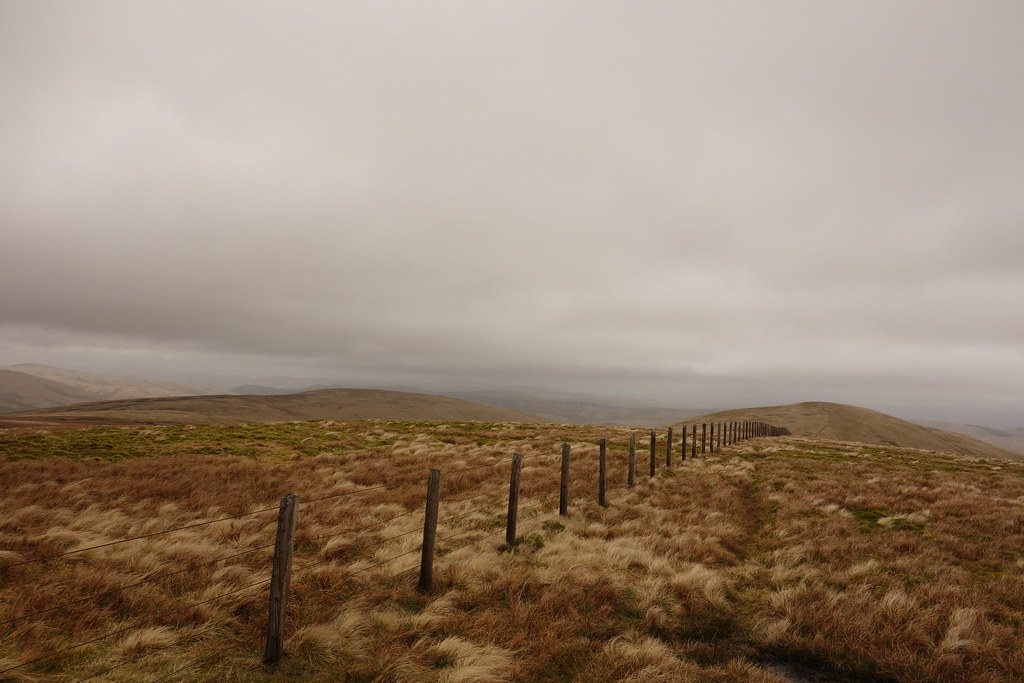 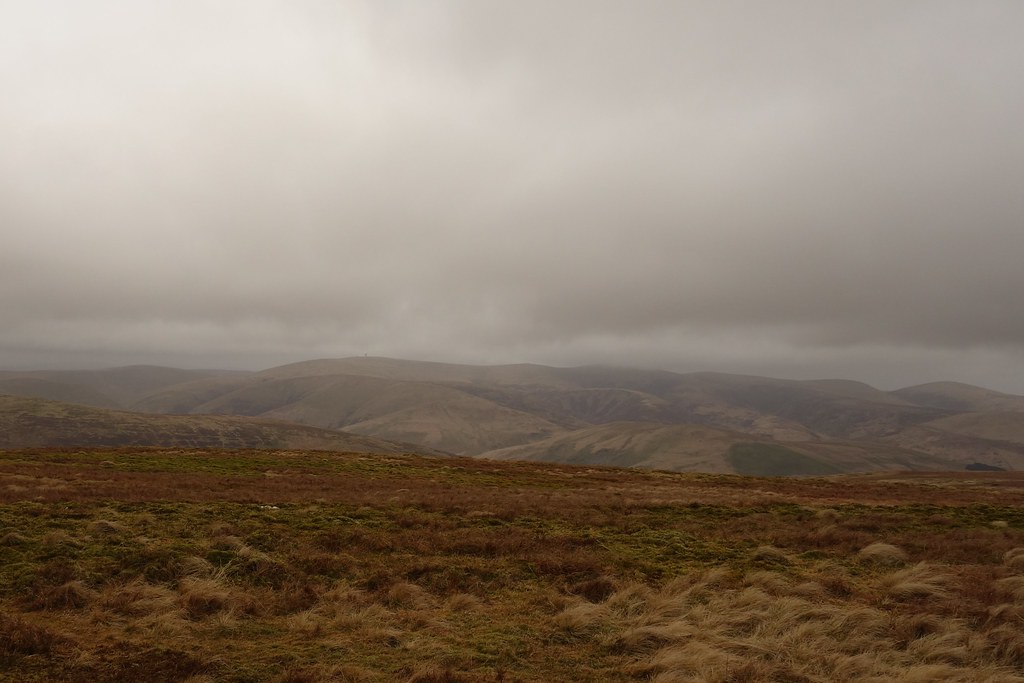 From here it was an easy but windy trek to Scaw’d Law, yet again unmarked and seemingly with 2 different options for summits. I visited them both and decided to push on. It was not a day for hanging around. I was also thinking about escape routes as this was definitely Type 2 fun and I wasn’t sure if I could be bothered with spending many more hours being blown around 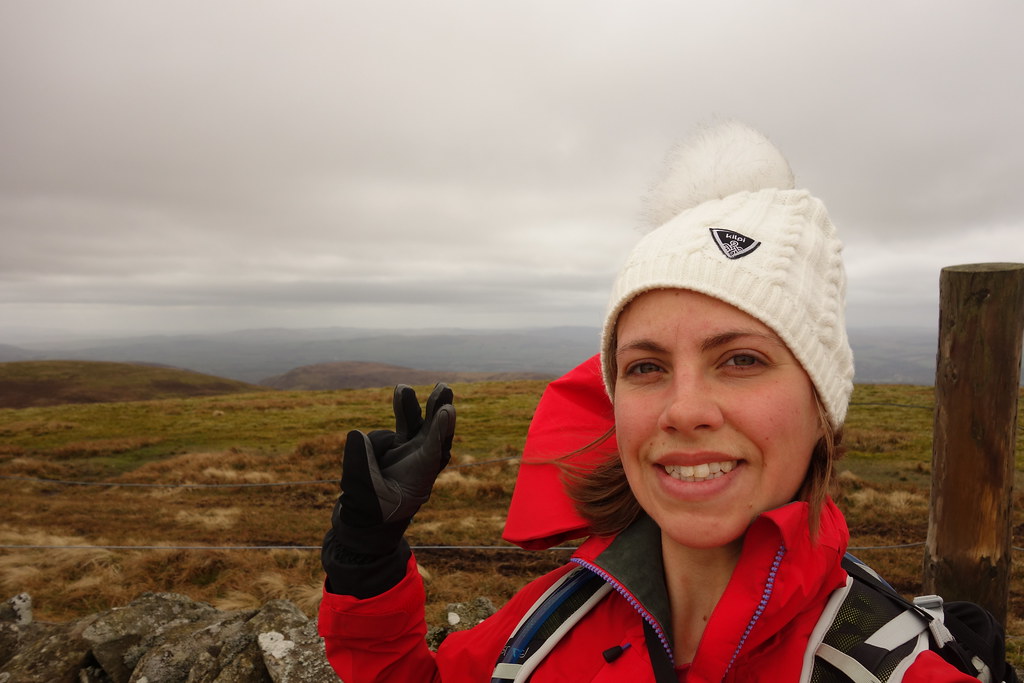 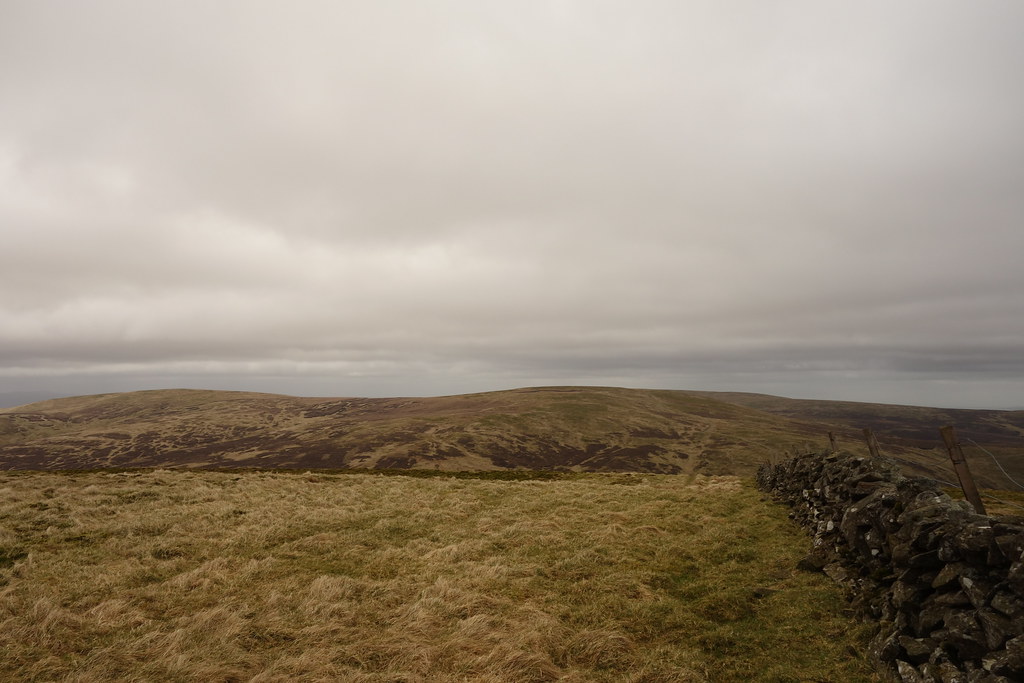 Another easy plod to my next summit, Wedder Law. The advantage of changing direction was a bit of respite from the wind. But all too soon I was at the summit, and being blown around again. 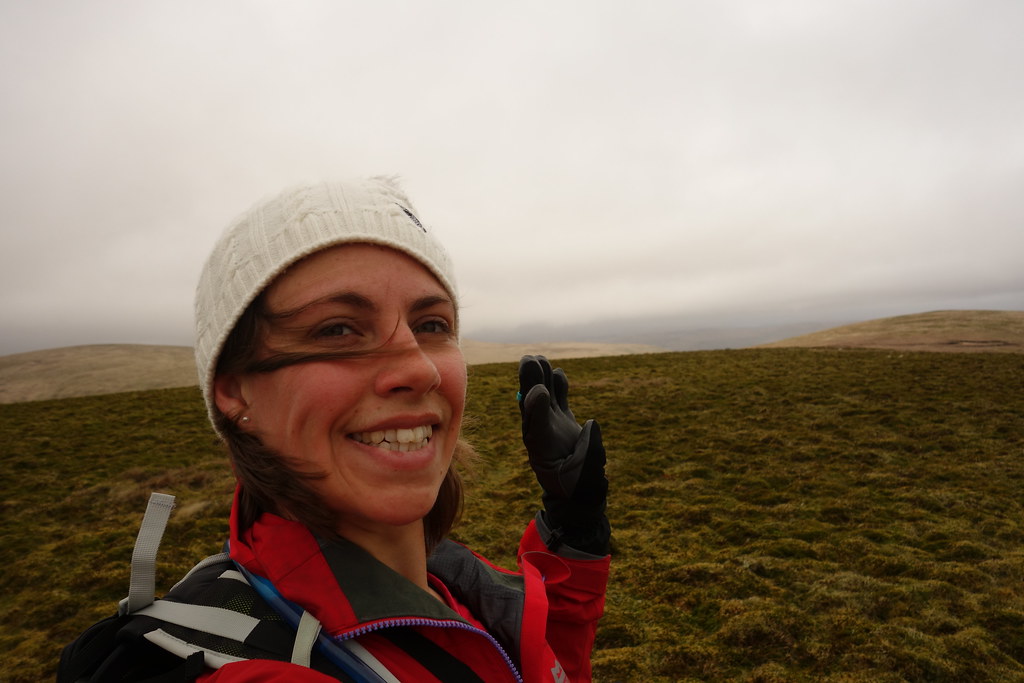 From here it was easy again to Gana Hill. I could see a track heading up it but figured the direct route would be quicker as I’d have to bog hop to get to the track

and a wind shelter. It wasn’t the actual summit (that was further along) but I utilised the wind shelter for a cheeky pose at last 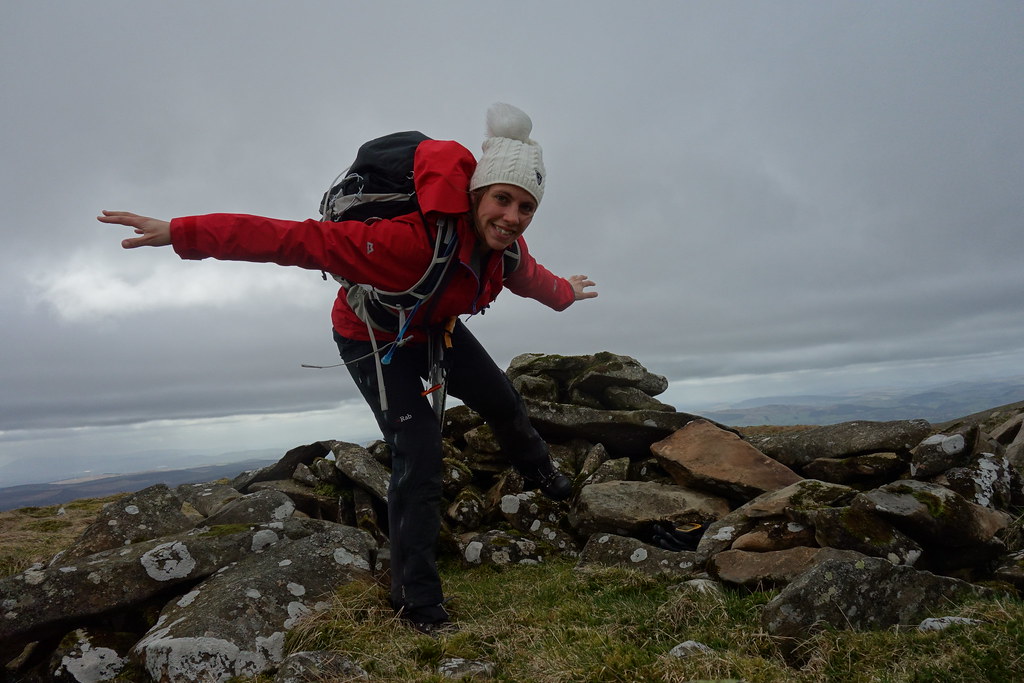 Looking down towards the reservoir 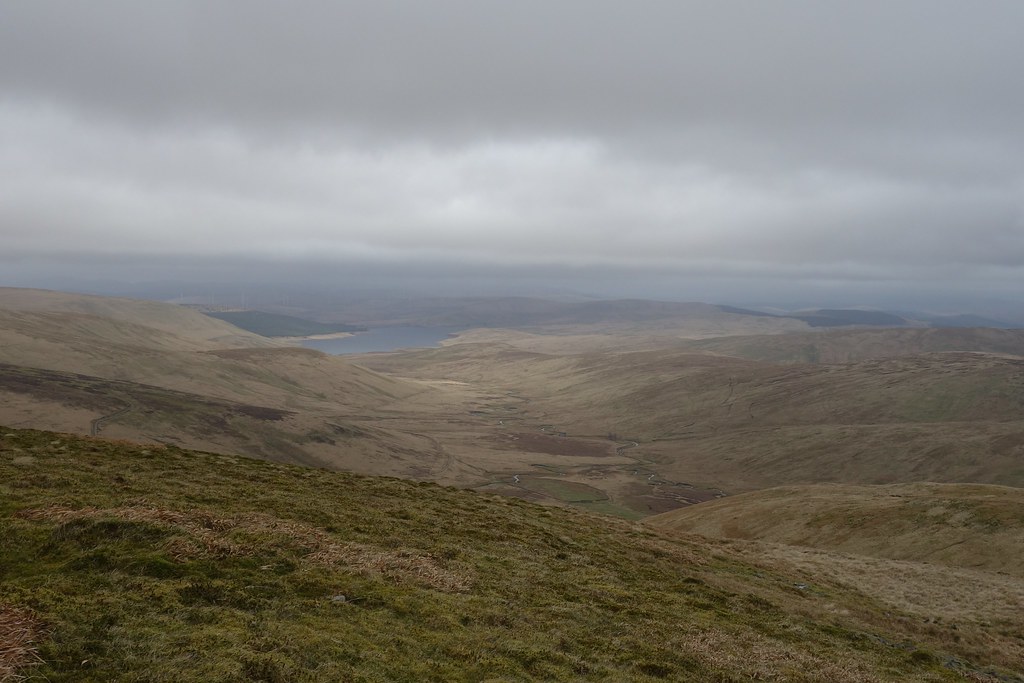 After visiting the actual summit of Gana Hill, marked by a less impressive cairn, it was a simple case of following more fenceposts across a boggy bealach (there was an ATV track which seemed to be boggier than the actual bog

) and then following a vague path up the steep side of Earncraig Hill, weaving around the crags. I climbed over a barbed wire fence to get to the summit although turned out there was a more easily climbable fence further round that wasn’t visible at the time.

Looking back to Gana Hill 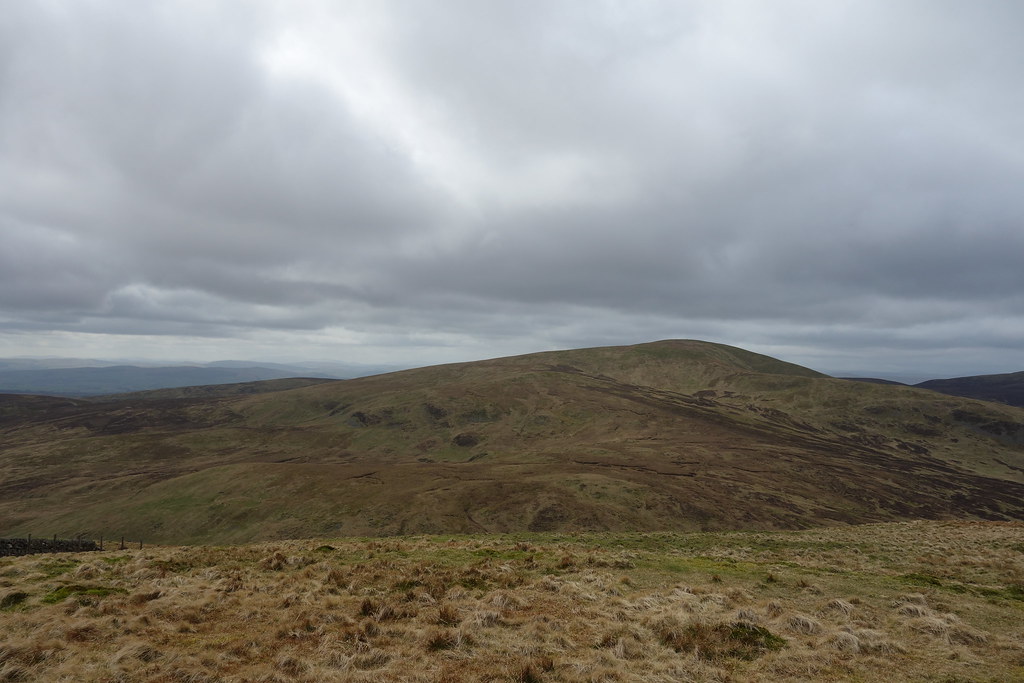 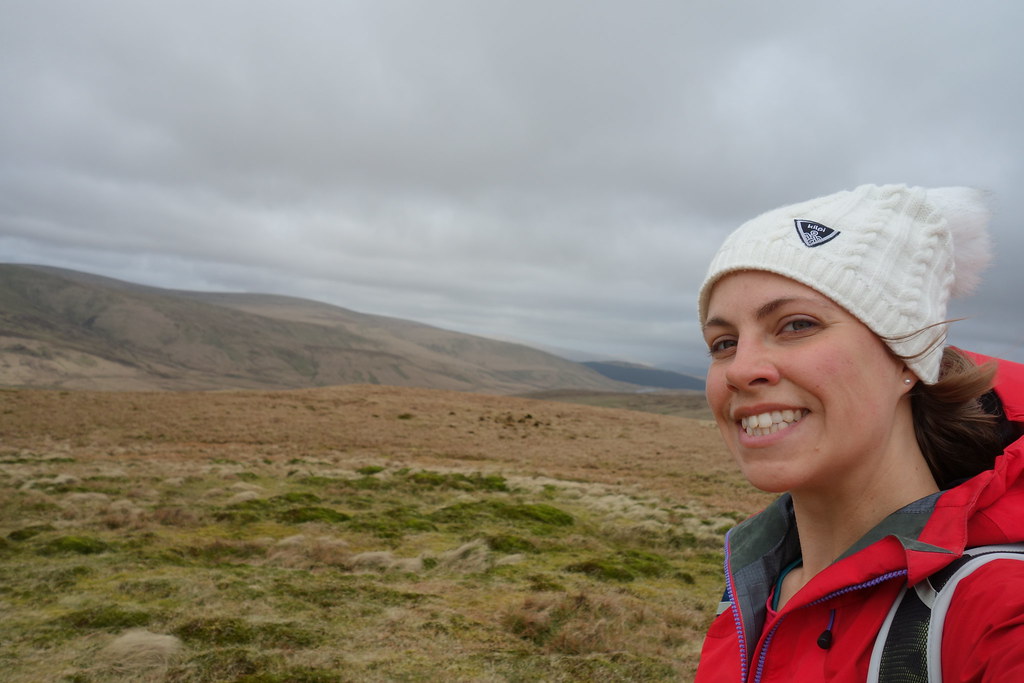 From here, Queensberry didn’t look too far away but unfortunately due to geology and lack of wings I had to take the long way round 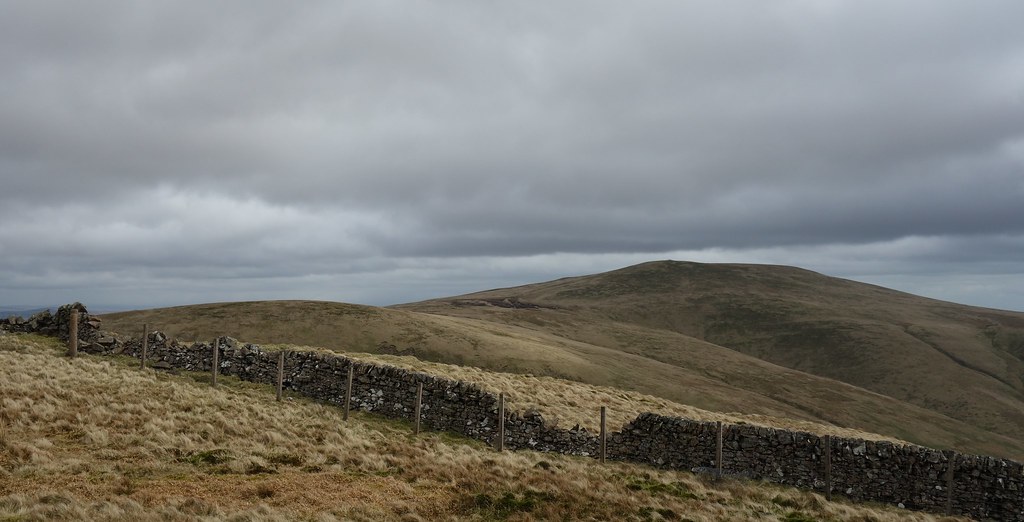 I followed fenceposts down Berry Rig before dropping down to Capel Yetts across bogs and peat hags. The reason for the diversion… 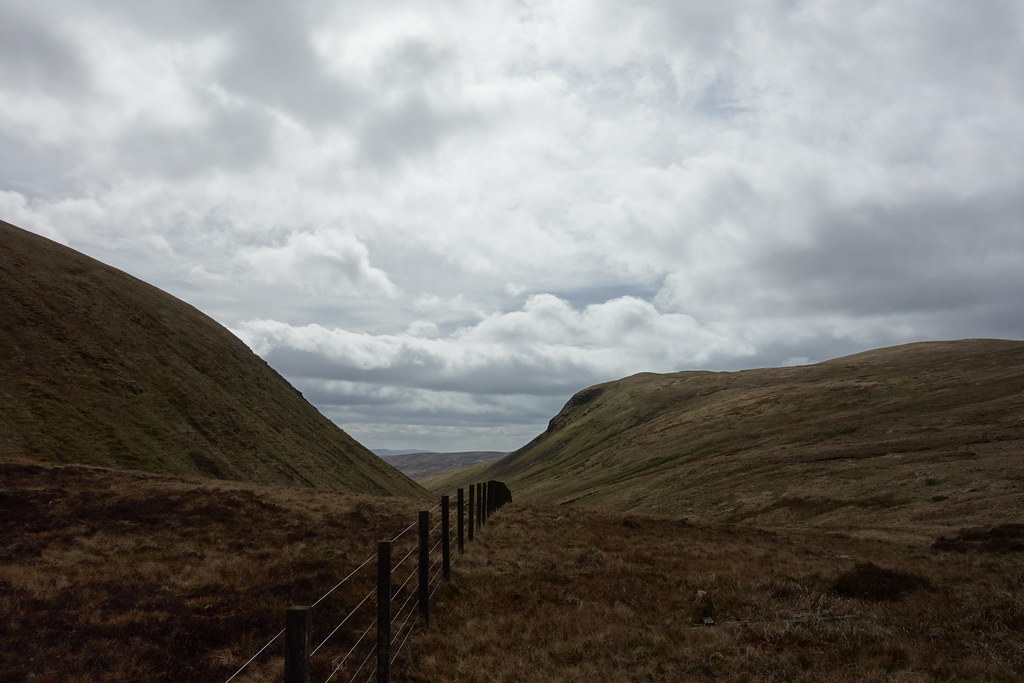 From here it was a steep climb up Penbreck, a lot of peat hags to cross and then a climb up Queensberry Shoulder… 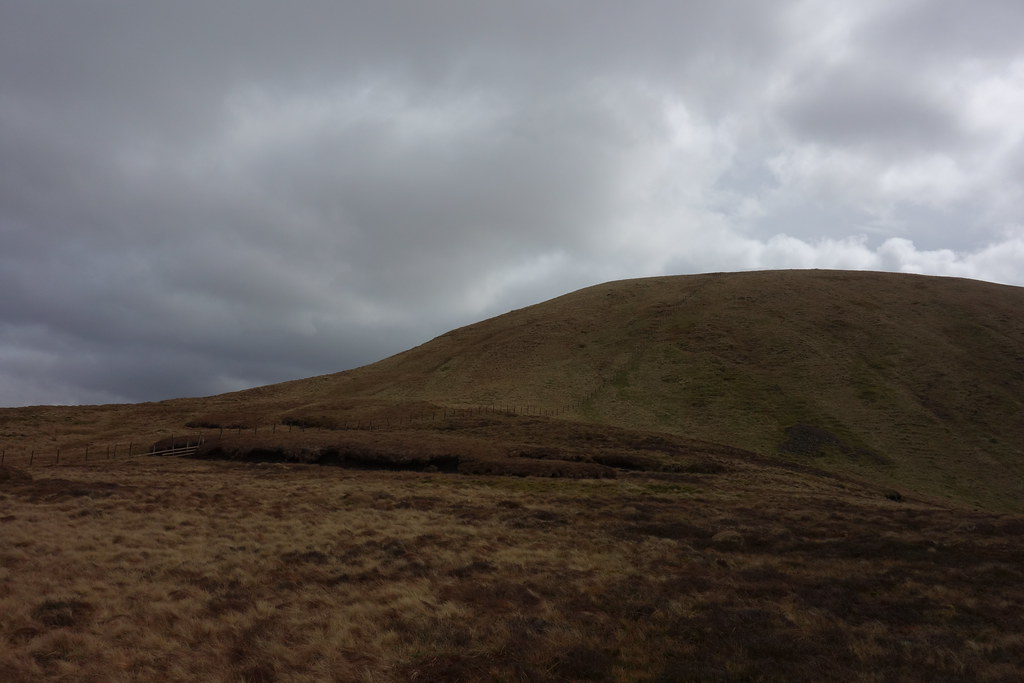 ….to the summit where I was brutally attacked by the full force of the wind

I dumped my stuff in the wind shelter and made the final climb up the huge cairn on my hands and knees. I attempted to stand and was nearly blown over

I retreated back to my belongings on my backside and sheltered from the wind for a few minutes.

Shelter for a pose… 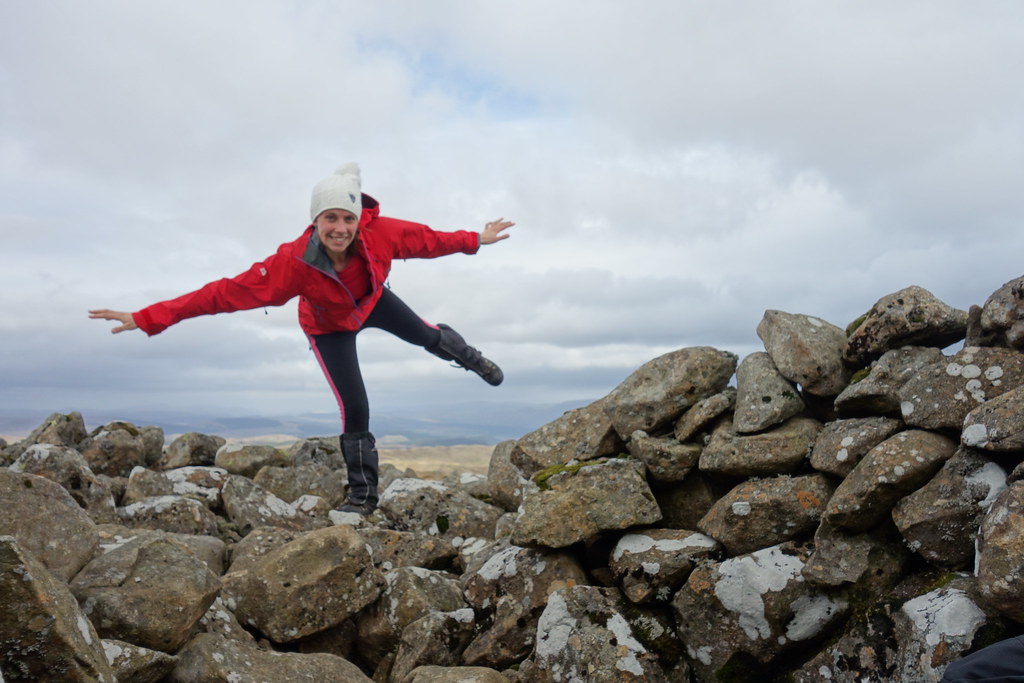 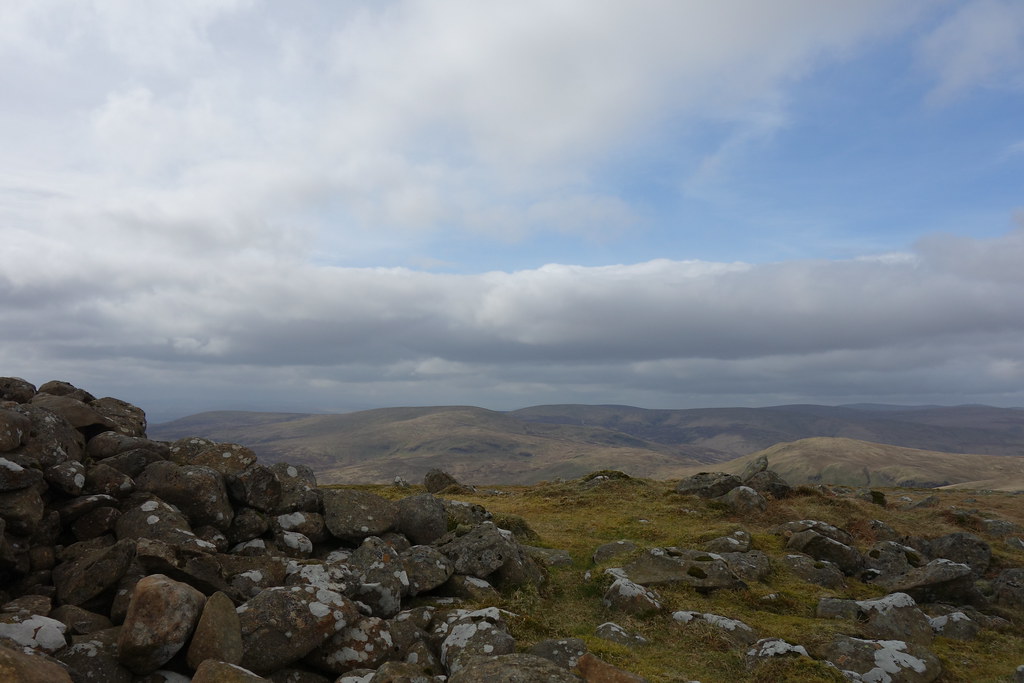 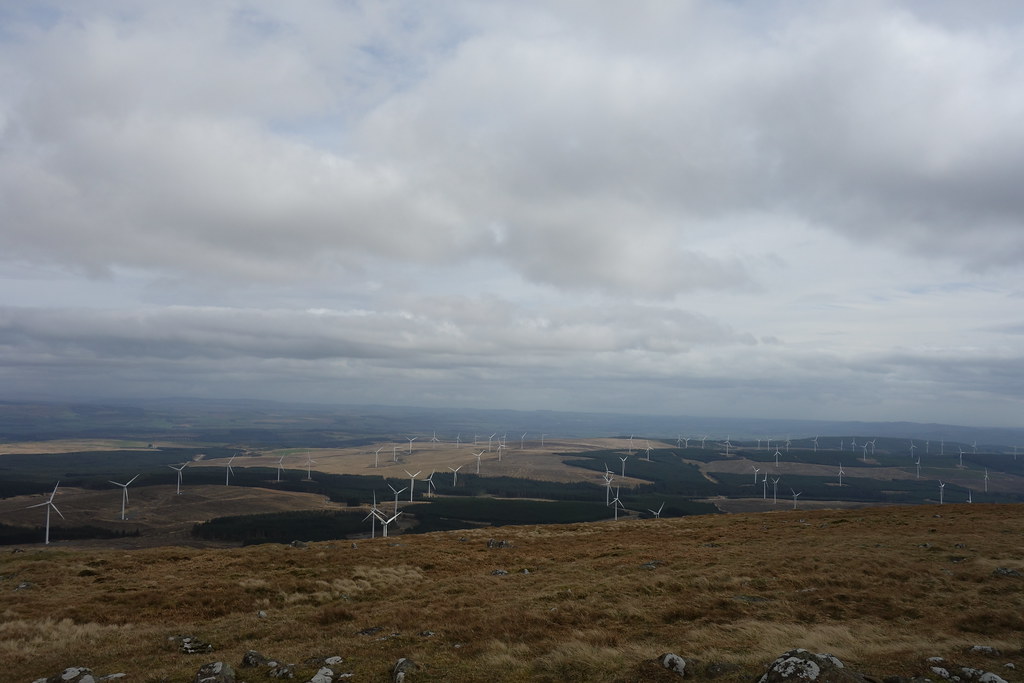 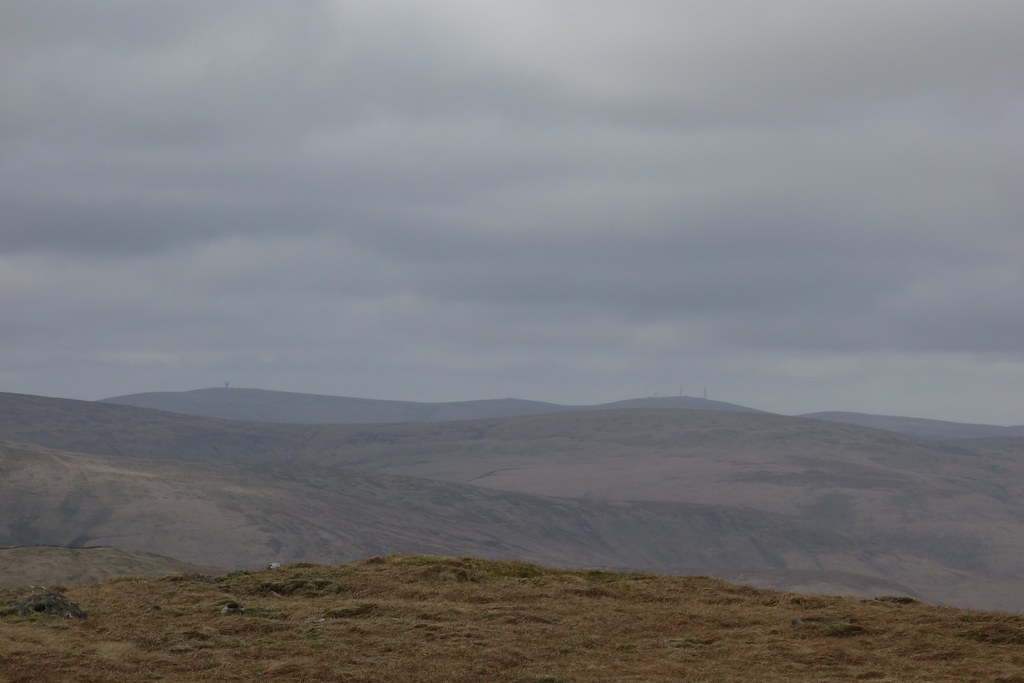 It was a case of retracing my steps to Capel Yetts, before climbing back up to the North Ridge of Earncraig Hill.

Looking back up to Earncraig Hill 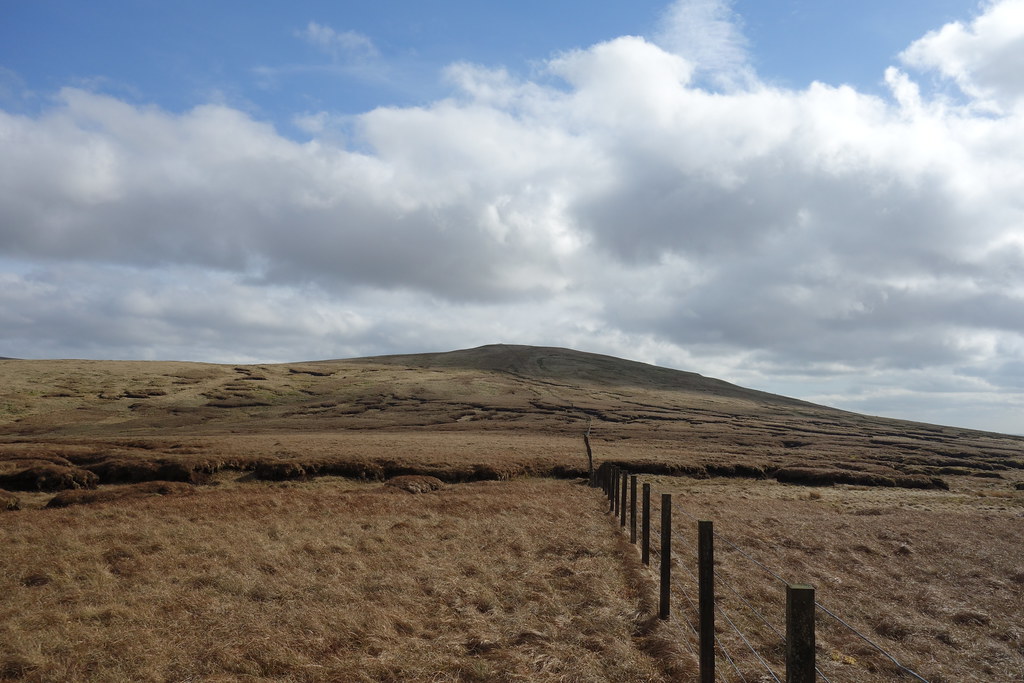 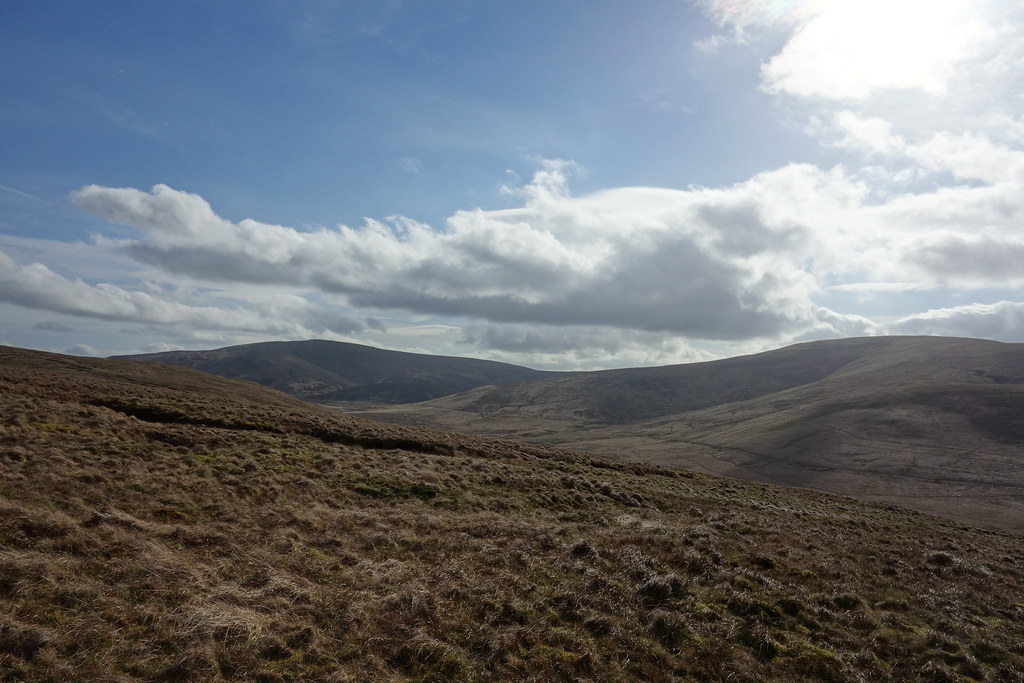 Previous users of this route have dropped down the other side, crossed the river and enjoyed a nice easy walk out along the track all the way down the valley. I thought a stroll down the ridge might be nicer (plus I have a fear of river crossings

) so walked over Lamb Hill, Over Law and Nether Law before dropping down to Crookburn, borrowing their bridge and walking back along the road to the car arriving back just before 6.

The reservoir from Over Law 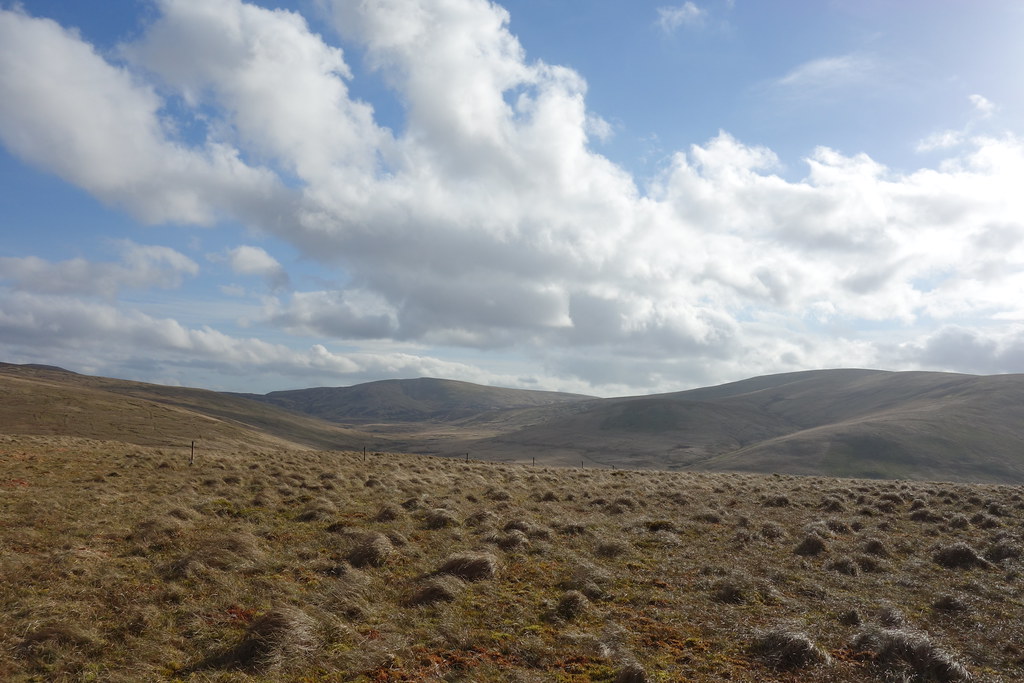 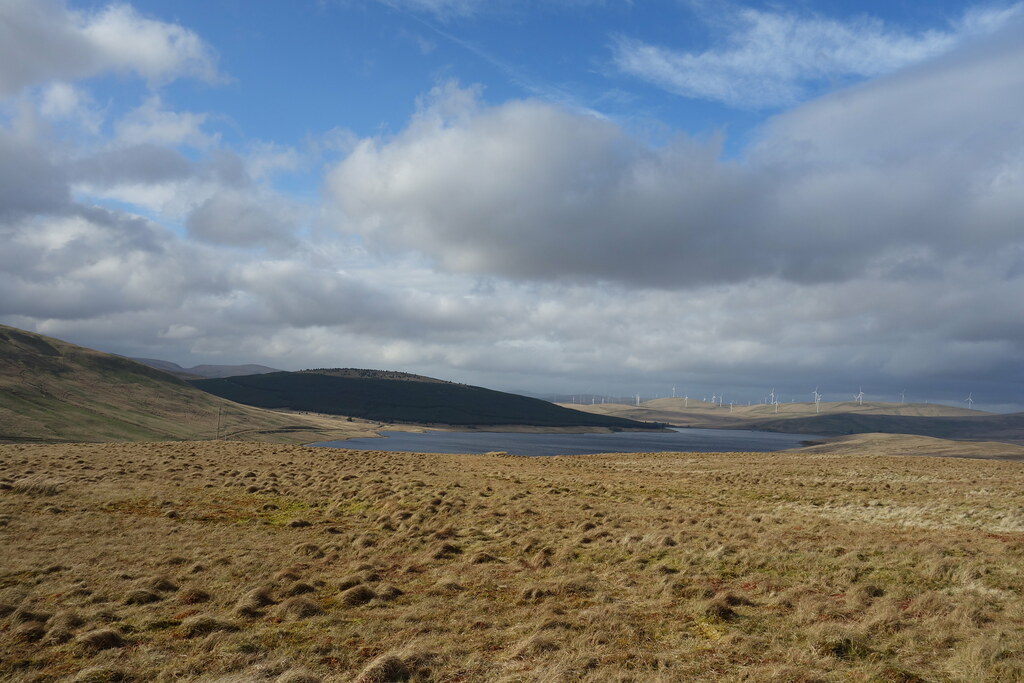 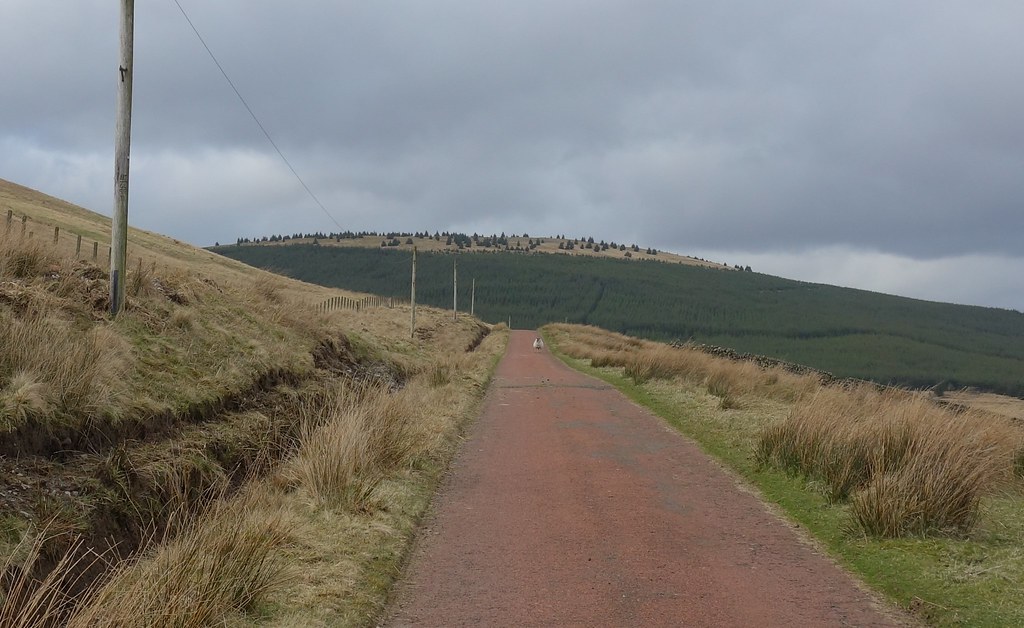 Looking up the Kirkhope burn towards Comb Law 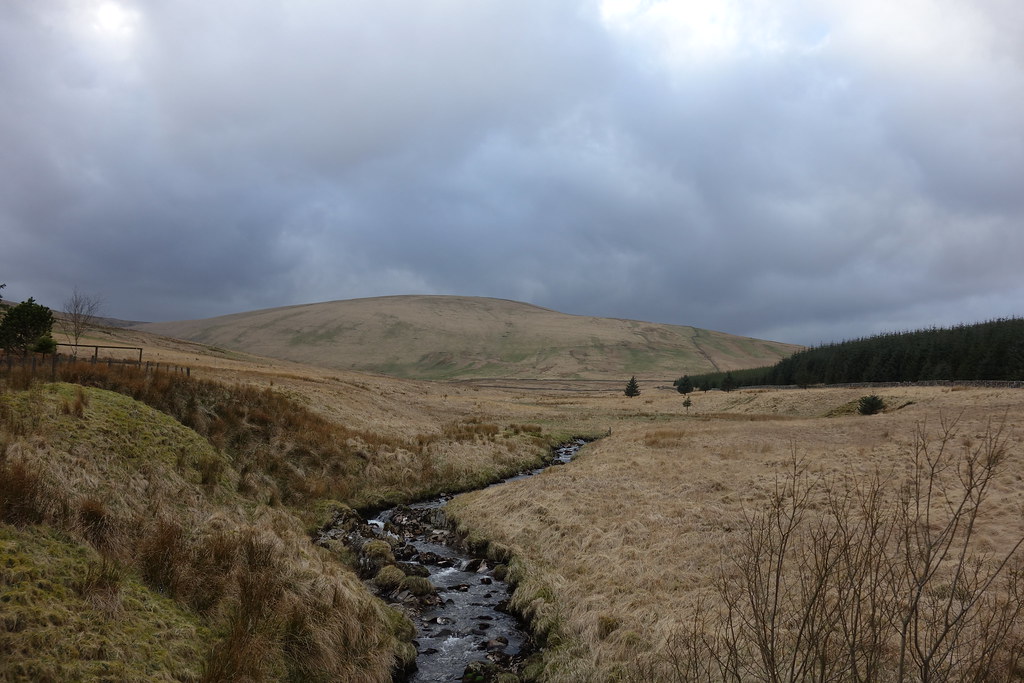 activity_1671625581.gpx Open full screen  NB: Walkhighlands is not responsible for the accuracy of gpx files in users posts

It was an easy drive home, and whilst stopping to feed Blondie I discovered cookie and cream flavoured KitKats. Day made

BTW I have competition for the Ballencleuch cairn.... 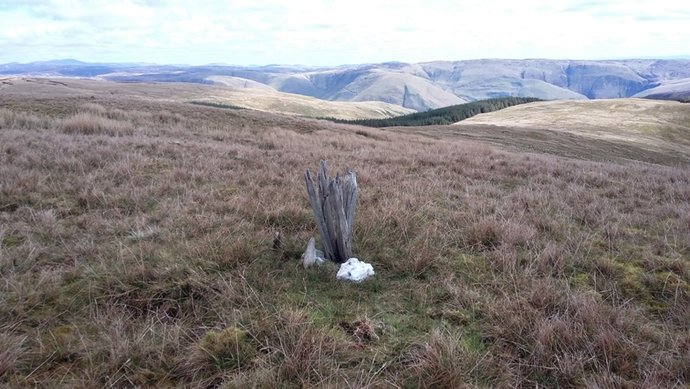 Pleased to see you've developed a streamlined version of the pose, just don't try it with a baggy top on or you might take off....

Didn't know these hills, only ever passed them at 70 (honest) on the motorway. Thanks for enlightening me.

Alteknacker wrote:That's a pretty speedy round - you were clearly blown in the right direction the entire way

BTW I have competition for the Ballencleuch cairn....

It was too cold to stand still!! I think your cairn wins, where is that one?


Mal Grey wrote:Pleased to see you've developed a streamlined version of the pose, just don't try it with a baggy top on or you might take off....

Didn't know these hills, only ever passed them at 70 (honest) on the motorway. Thanks for enlightening me.

they're good because it's a shorter drive, although there are those horrible roadworks around Hamilton to contend with

Jaxter wrote:..... I think your cairn wins, where is that one?

It's a Hewitt in Southern Snowdonia (it features in the WR I did of an outing in the Arans).

I'd never seen anything quite so odd before...

Jaxter wrote:..... I think your cairn wins, where is that one?

It's a Hewitt in Southern Snowdonia (it features in the WR I did of an outing in the Arans).

I'd never seen anything quite so odd before...

There's a similar one on Hillshaw Head....