My planned walk yesterday was postponed after a poor weather forecast, so I found myself heading up the A9 on a bright morning, with all to play for. Unfortunately, after such an encouraging start to the day, you can imagine my disappointment 10 minutes from Balsporran, when the could rolled in and the rain came on! However, this was the pattern for the day - showers interspersed with more benign conditions and the bright spells more than compensated for the clag!

I parked at the large area across the burn from the cottage and was the first car there. The cold wind meant that I got the boots on quickly and started to follow the track. The tops were now clear and A'Mharconaich certainly looked more of a mountain than it's neighbour. I last climbed these hills in 1983 on a very snowy March day and although I followed the same route, there is little I can remember about it, apart from the presence of the large narrow cairns just under the summit of Geal-Charn that have now been disappointingly demolished - I can only imagine by some rather anti-social walkers. A great pity as they were the only distinguishing feature of Geal-Charn!

I found the track that takes the direct route to the summit of Geal-Charn and decided to follow that, rather than the track leading to the bealach. I followed the track until its rather abrupt ending where it is replaced with a faint AV track and a very peaty/boggy footpath, although it would be hard to describe this walk as hard going. On the way up, when the cloud permitted, I was treated to some pleasant views. It didn't take long for the ground to level out as I approached the summit. I made a detour to say hello to what remains of the tall cairns. A'Mharconaich from the tall cairns 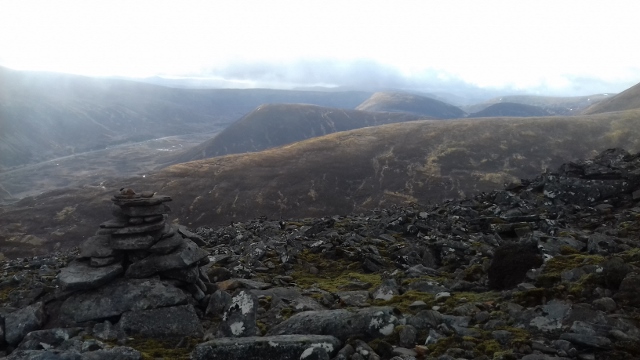 Looking south to the Sow of Atholl

It was quite a short walk from here to the summit of Geal-Charn, where I was glad to shelter from the cold wind at the stone shelter. It is only at the summit that the views over Loch Ericht open out - The Fara, Loch Pattack and the Ben Alder range - quite an eyeful! 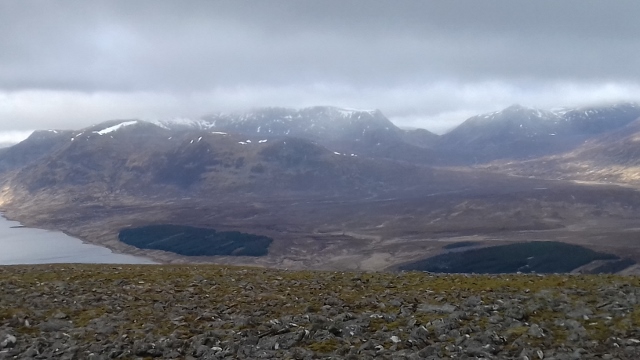 I headed south to the bealach and as I made my way to the shoulder of A'Mharconaich, I was lucky enough to see a couple of mountain hares. Their coats were at the in between stage - not quite summer and not quite winter. A great sight. Once on the shoulder, it was a short and easy walk to the summit. There are two cairns, but I think that the first one you come to on this approach is the higher point. 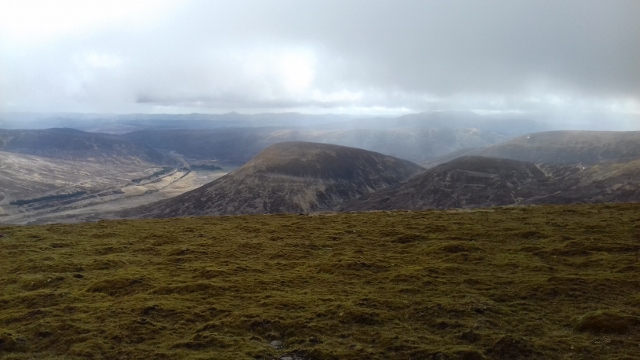 The view south from the summit of A'Mharconaich

After a short stop, I began to make my way back to Balsporran by the north east ridge. It was very easy to follow the route as a path has now been beaten out by walkers' boots. Looking back to the summit from the north east ridge

I stopped for lunch atop a conveniently placed boulder at the side of the path. 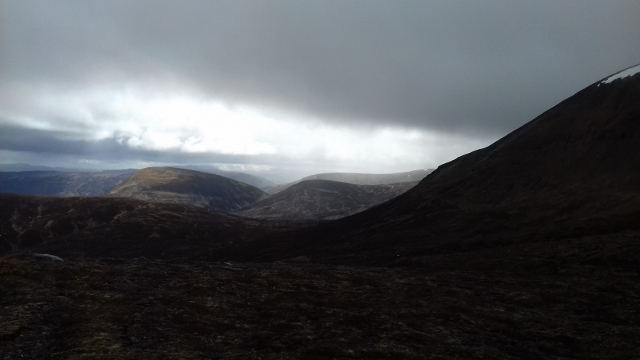 The view south on the descent

I quickly arrived at the foot of the ridge on the moor south of Balsporran. It was hard to see the path at this point, so I made for the main track, crossing the Allt Coire Fhar to regain the track at the point where I headed uphill this morning. A backward look from the track

From there it was a short an easy walk in the early afternoon sunshine to Balsporran and the car. 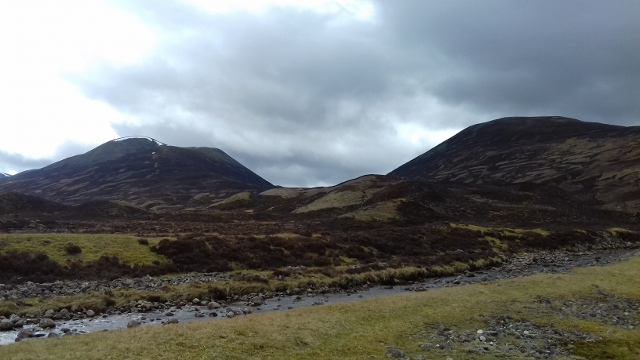