I pulled off the A9 at Dunkeld shortly after 9am, and headed for the carpark at the Osprey Centre on the Loch of the Lowes. A short walk along the road took me to the path signposted for the Cally carpark and Dunkeld. Despite the varying weather on the drive down from Inverness (including snow most of the way down to the Drumochter), it was bright and spring-like down in Perthshire, with even the higher hills carrying little hint of the fresh snows further north.


Newtyle Hill.gpx Open full screen  NB: Walkhighlands is not responsible for the accuracy of gpx files in users posts
Loch of the Lowes: 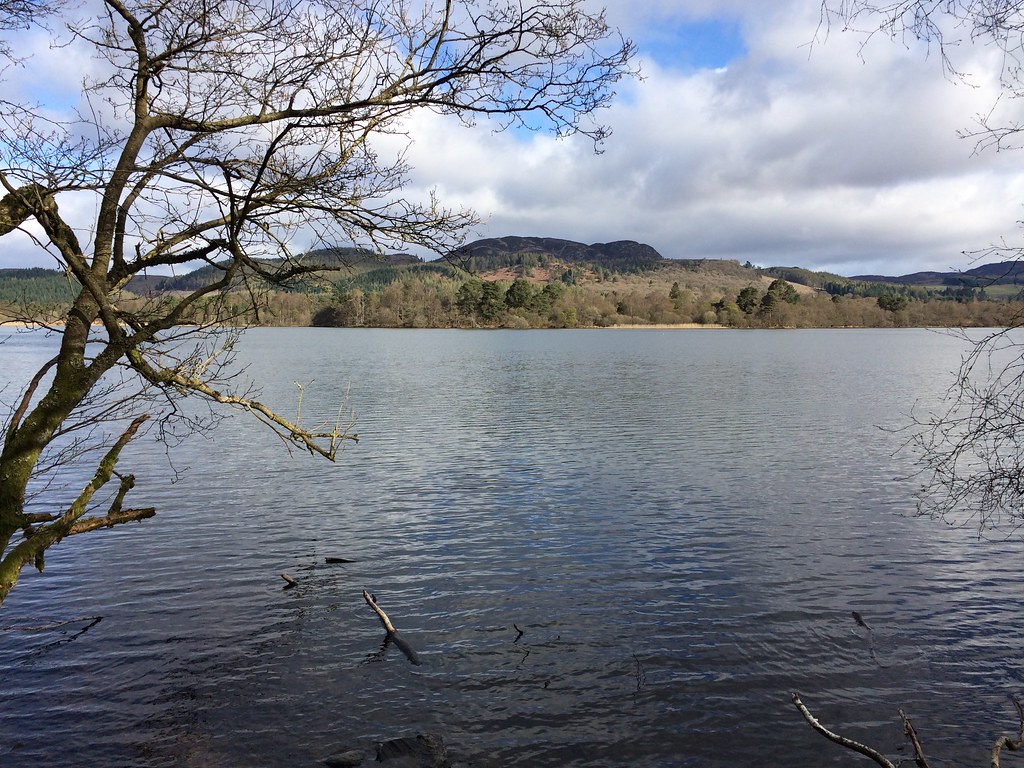 Path from Loch of the Lowes: 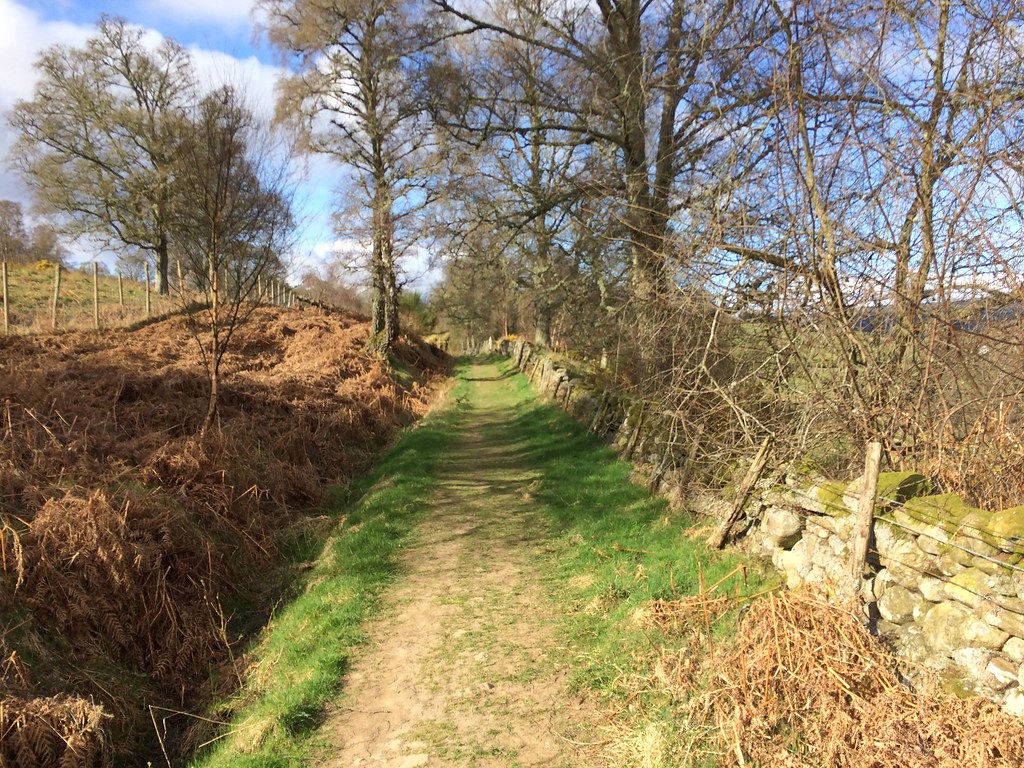 The path led pleasantly to the track which winds up to a mast on the hillside above Dunkeld. There were glimpses of the Tay through the trees, and once in the open, lovely views back down Strathtay to Dunkeld and the bridge. Although there was some plantation and felled area, the woodland was pretty varied and attractive.

Dunkeld from the transmitter track: 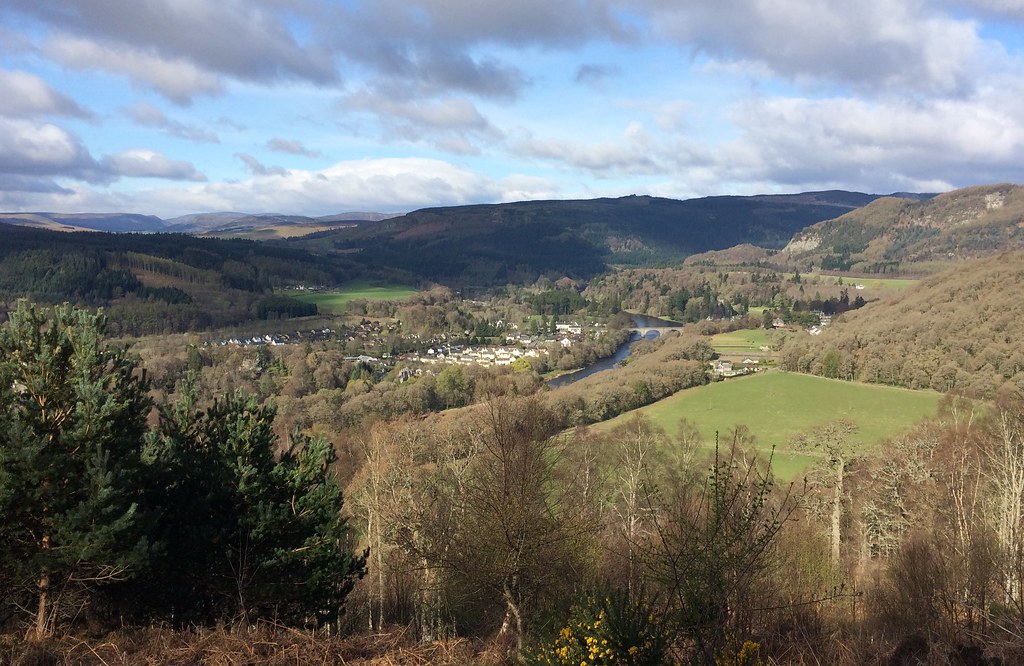 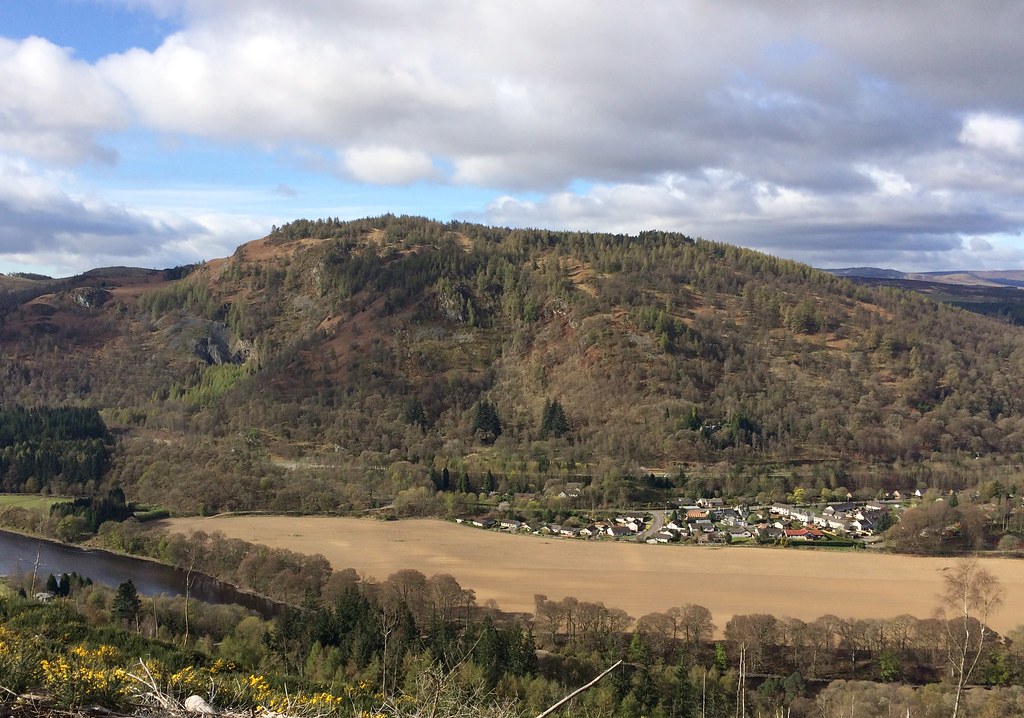 Across the Tay to the Lomonds: 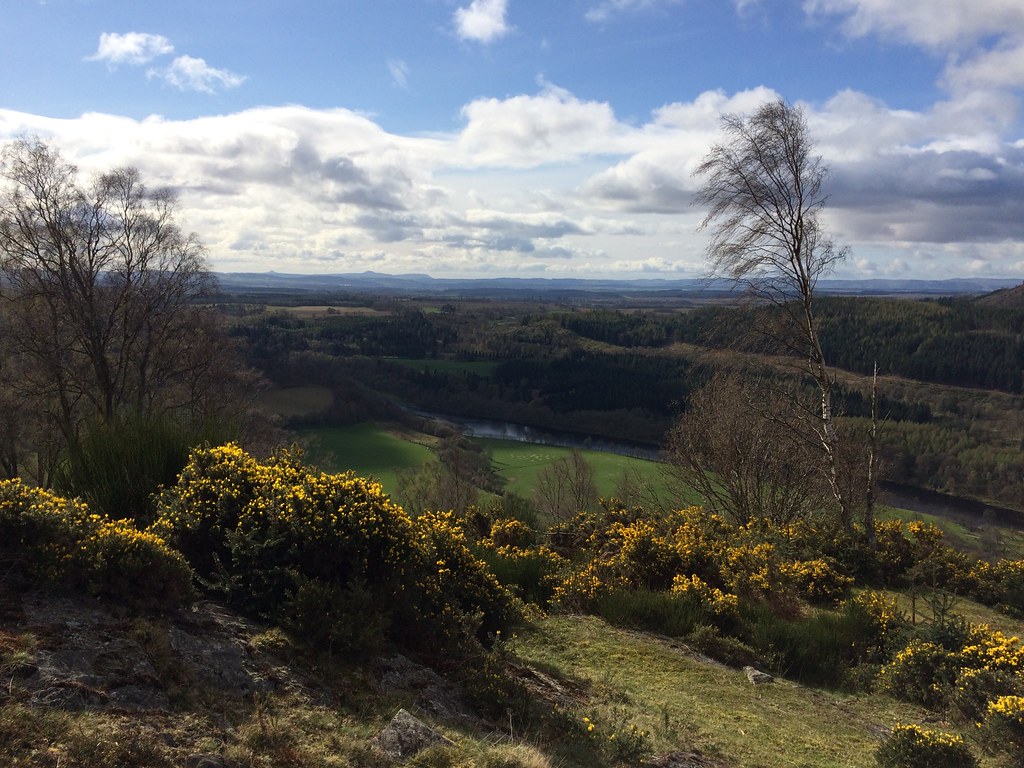 Beyond the mast, the track continued more faintly, and I took an even more obscure right branch which looked like it would lead to a nice viewpoint at the top of Newtyle Quarry. It certainly did - an attractive little knoll with a few trees and crags on it. I retraced my steps back along the obscure branch and continued on the main track, which wound back left to double back up onto a knoll above the mast. More great views here, but it was now time to dive into the rougher ground for the summit.

Birnam Hill from above Newtyle Quarry: 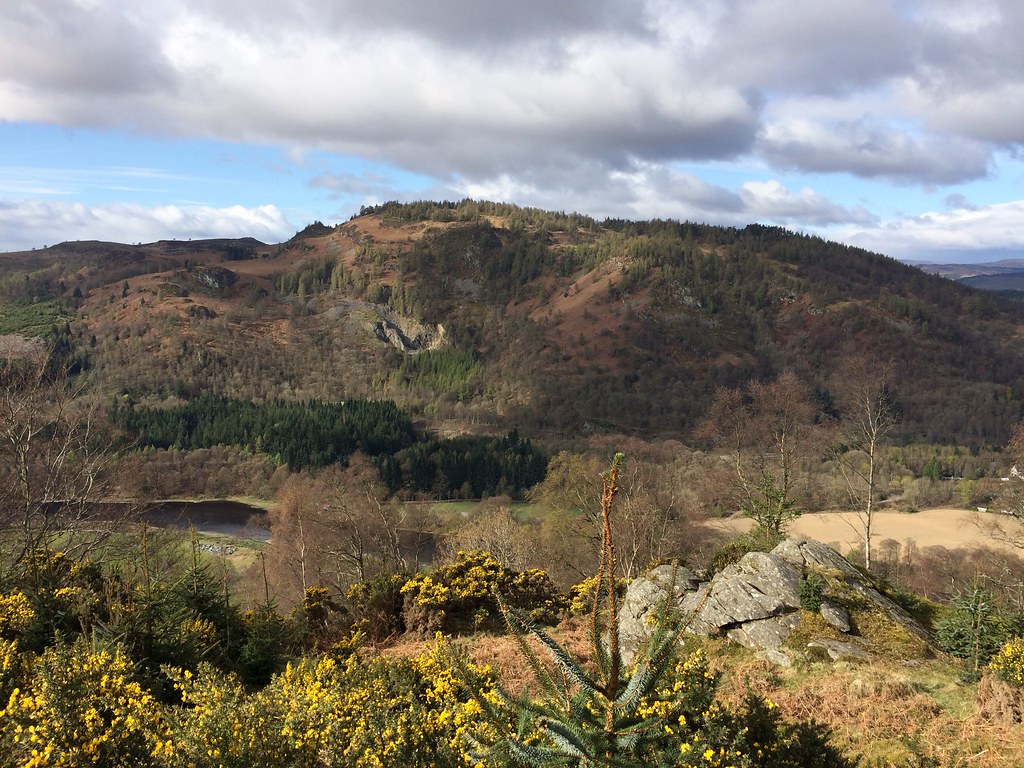 View over Dunkeld from near the summit: 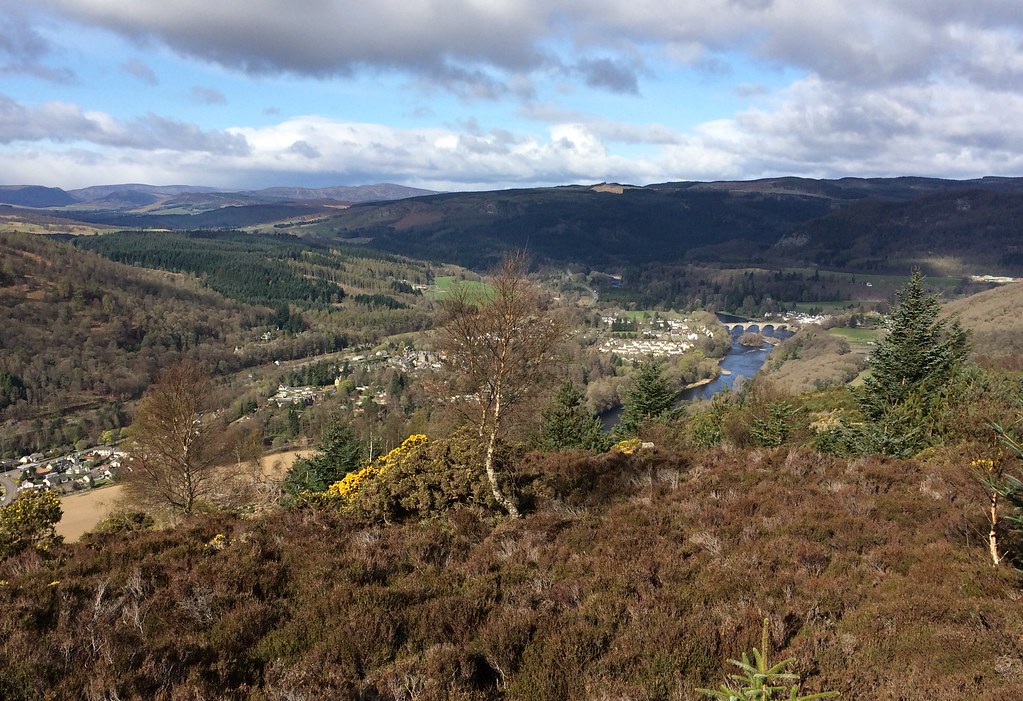 A ladder stile led over a deer-fence into an area of mixed woodland and clearings. The going was a little rougher here, and would probably be more awkward once the bracken is up in the summer. I pushed my way through across an intermediate knoll to the summit, which was partly obscured by trees. The lack of decent summit photos in the various reports of this hill had led me to believe that there was nothing to see from the top, but this wasn't entirely true. The views are definitely better from the sides of the hill, but the top is far from being completely hemmed in, and despite being a little hard going in places, is still very attractive. 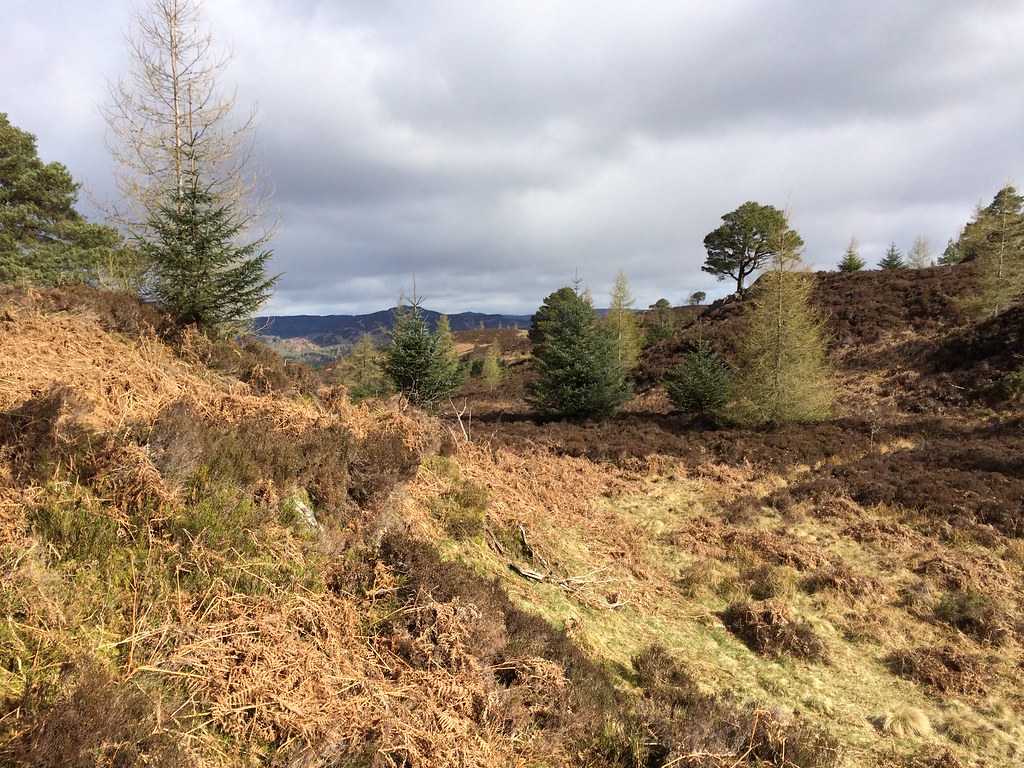 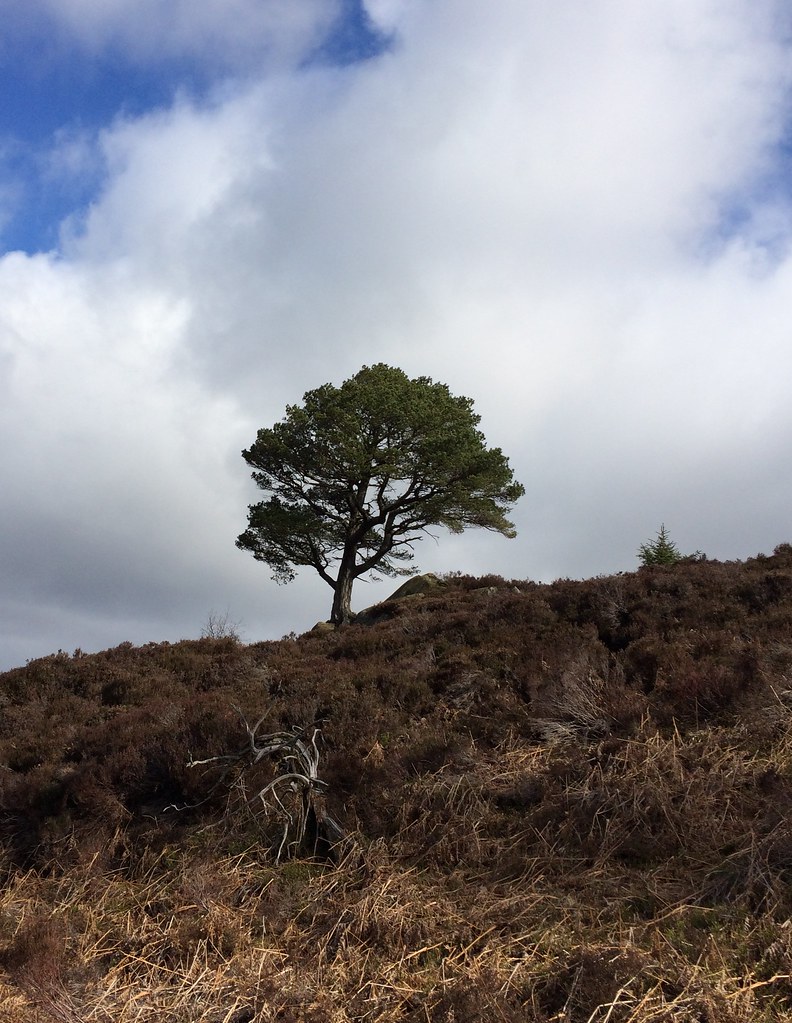 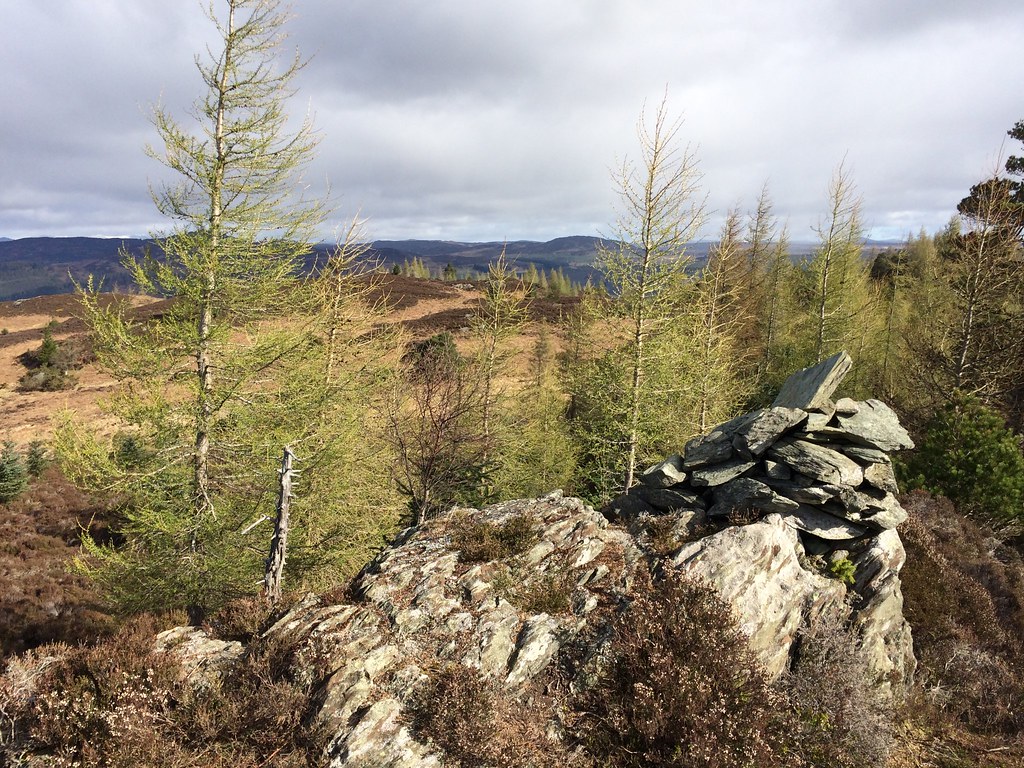 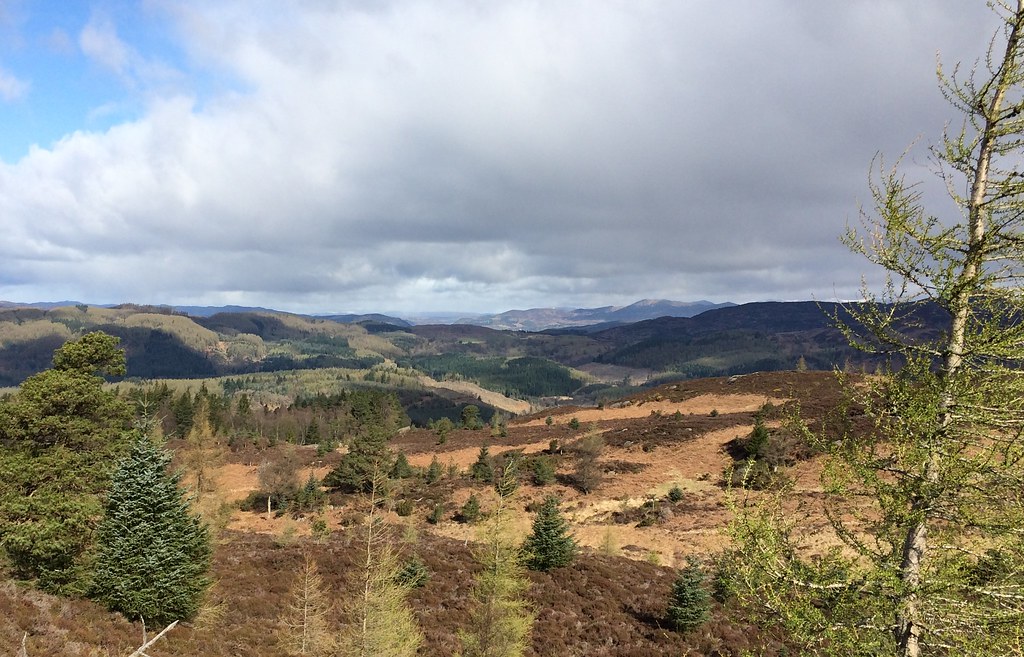 I decided to stick with this terrain and take a more direct route back to the car, picking up a path I had spotted on the way up. This was initially quite rough, with some of the clearer-looking areas being a bit marshy, but before long I was climbing over a fence/wall into rough grazing land with great views over the Loch of the Lowes and Loch of Butterstone. Despite driving past this area constantly, and occasionally cycling past it in my Dundee University days, I had never really realized how attractive it was.

Across Loch of the Lowes to Deuchary Hill: 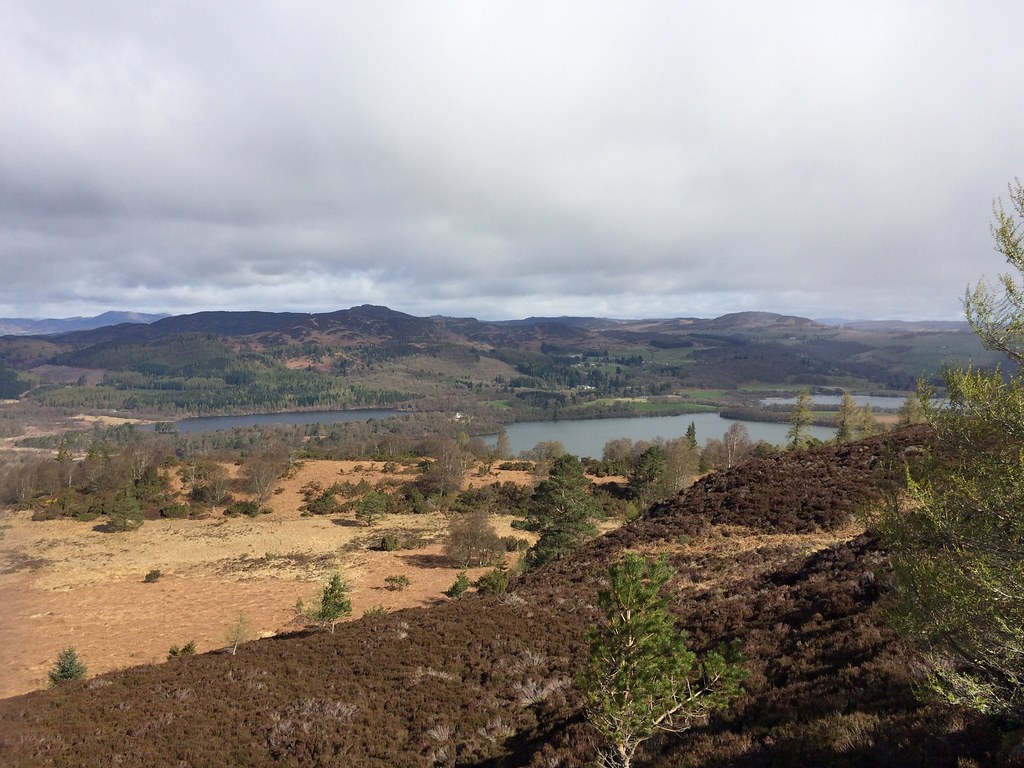 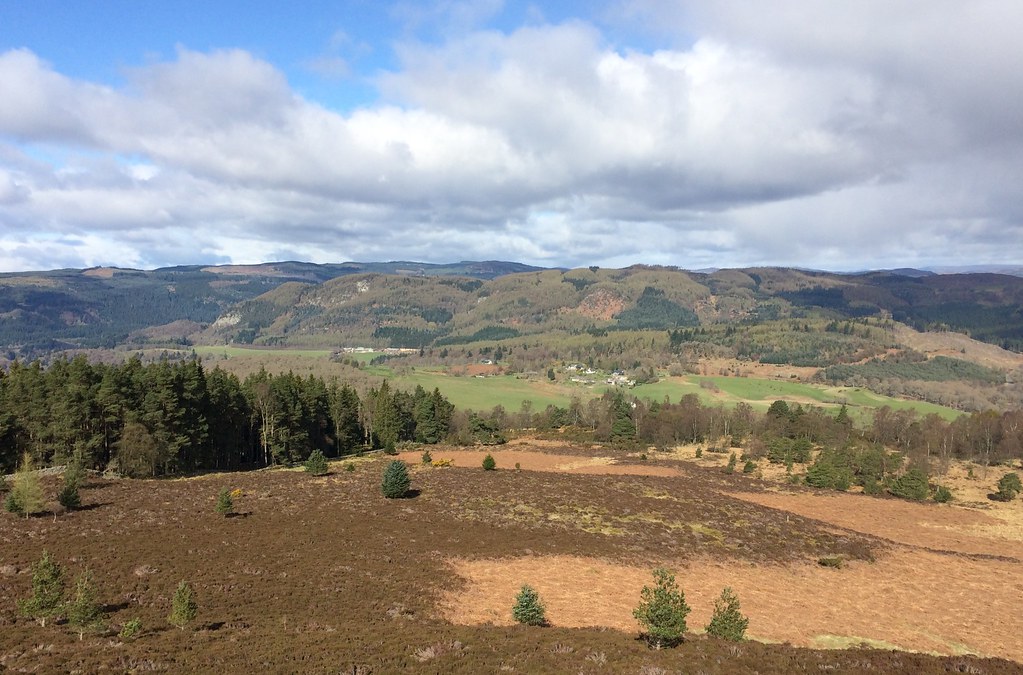 In the grazing land, I picked up the path and rejoined my outward route. Perhaps it was the lovely sunny weather, but I really hadn't expected much from this hill other than a bit of fresh air. Even if the summit was the less interesting part of it, the area will definitely be getting more visits in the future.

Descending to Loch of the Lowes: 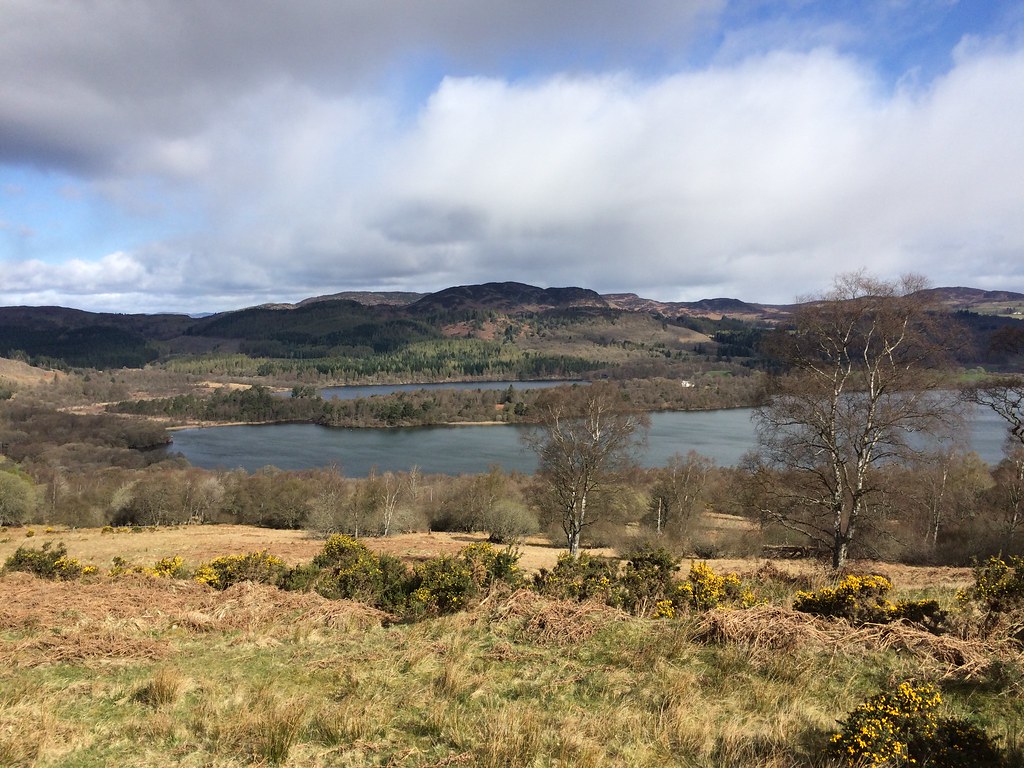 Cademuir Hill is not somewhere I really expected to go at any point in the future. I had noticed it on the map before, and thought it might be worthy of a diversion when doing the Glensax horseshoe, but in the end I approached Dun Rig from another direction, and while it is a decent bit of Borders upland, it didn't feature that high on the list of places I was likely to return to anytime soon. Plus I was aware of the blanket of forestry that covered the highest point.

Having arrived at Laura's place and had lunch with the family, Laura suggested going out for a walk somewhere. She showed me a Forestry Commission map and suggested that the Cademuir Forest trails would be a handy place for her to get a bit of fresh air with her 3 month-old, and let the dog off the lead without any fear of sheep being chased. Oh well, I thought - I might just nip off the waymarked route briefly and pick up an unexpected second Marilyn that afternoon. I also remembered Russell had posted up recently that the summit area had been felled, meaning there might actually be some views.


Cademuir Hill.gpx Open full screen  NB: Walkhighlands is not responsible for the accuracy of gpx files in users posts
In the classic family way, we didn't set off from the carpark until 4pm. After following a track back towards Peebles for a bit, we turned sharply round and started ascending the northern side of the hill. The John Buchan Way, which leaves Peebles and crosses open ground just outside the forestry area, is probably a nicer way of gaining the height. However Laura's mutt, which is only a little more than a year old, but already something of a horse, has once jumped a rather substantial fence in pursuit of sheep, so we were much better allowing her to run about off the lead in the middle of the forest.

Dad and the mutt in Cademuir Forest: 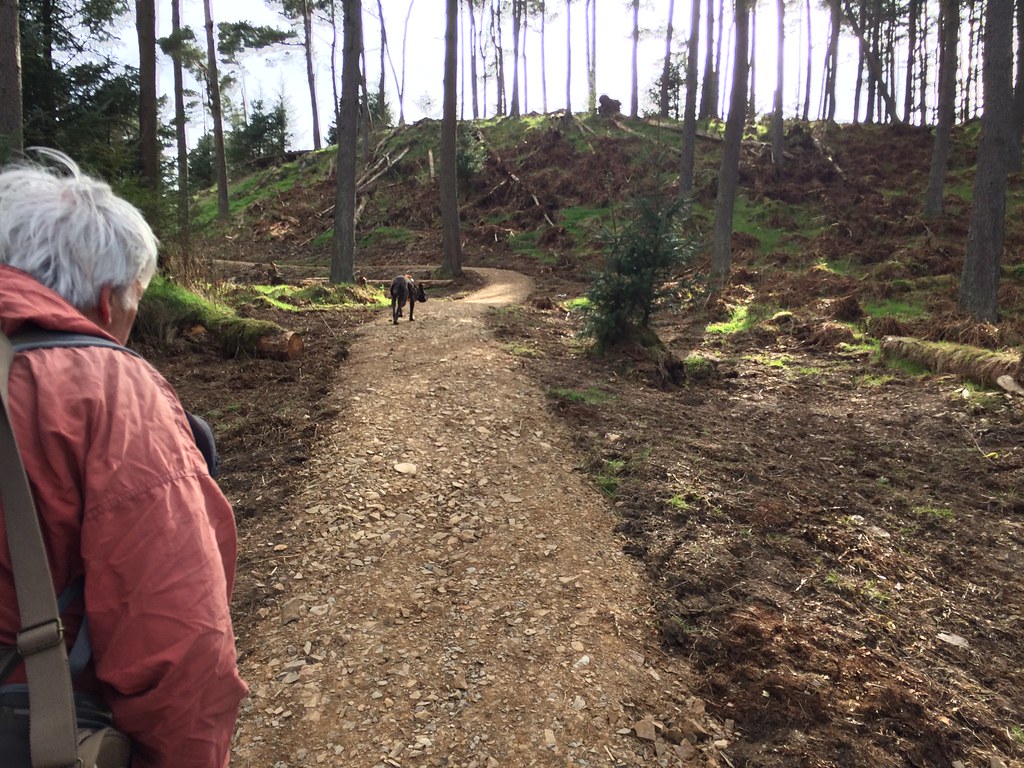 A glimpse of Peebles: 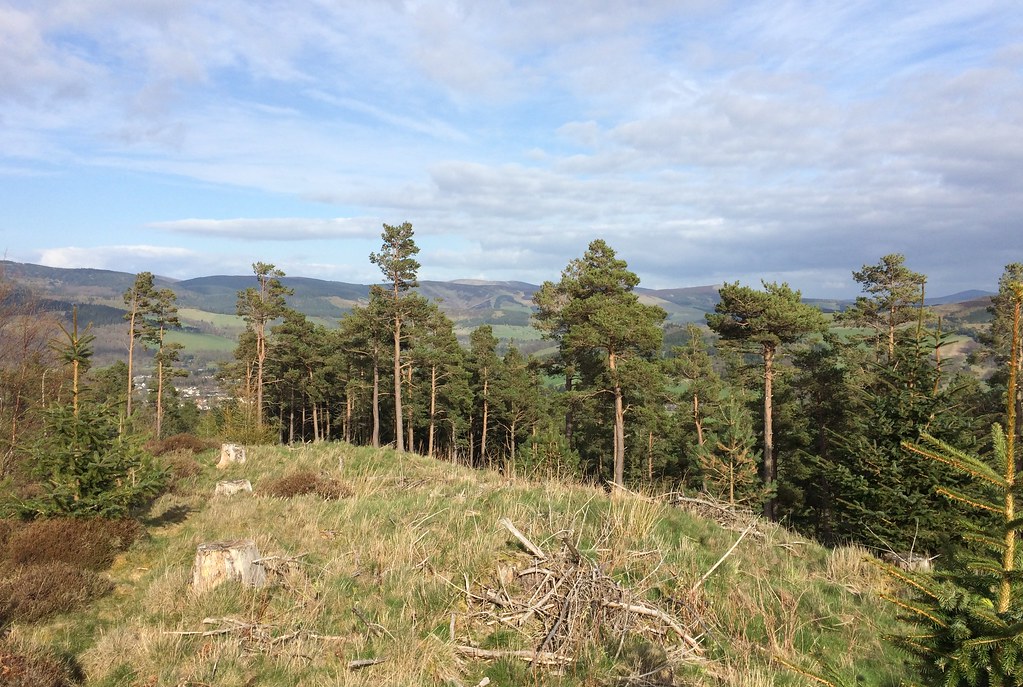 Further along, where the waymarked route passes through a small col, the other end of Cademuir Hill, with a hill fort on the summit, is well seen. It looks quite attractive, and if I was here again, I would be heading for that summit rather than the highest one. At this point the route shown on the Forestry Commission map descends and meets a track lower down. However a newly constructed path could be seen snaking up the recently felled area to the highest summit. Dad and I took this with the mutt, while Laura and mum descended the original route with the baby, as it was a bit breezy up here.

Pykestone Hill and the Manor Valley: 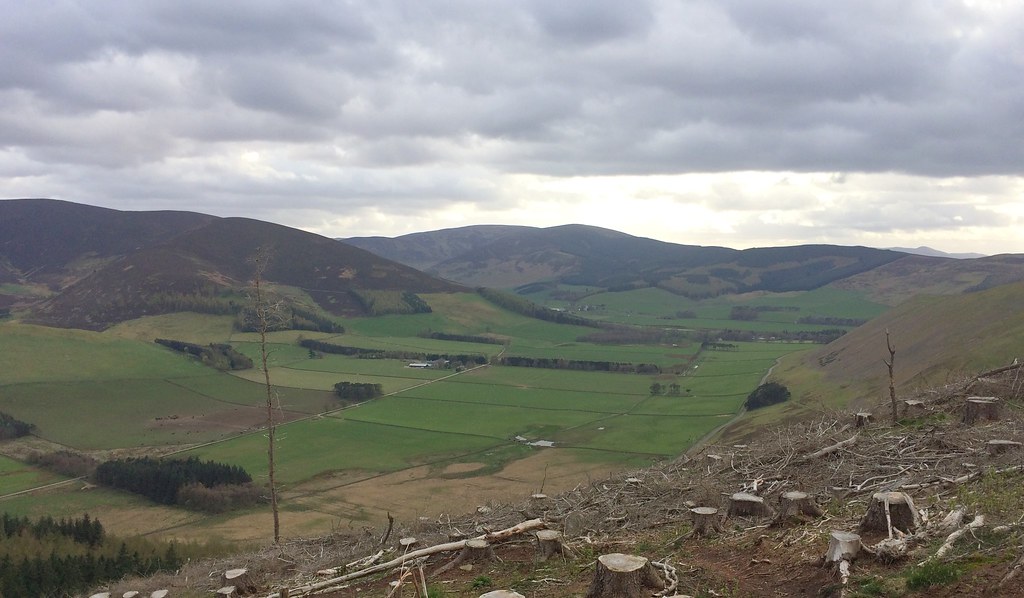 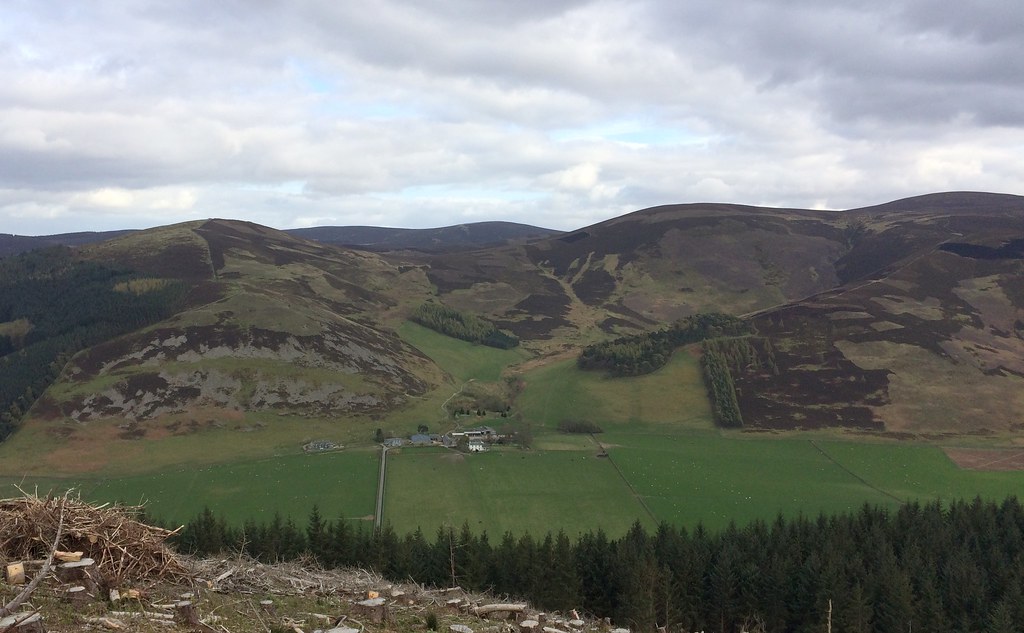 Peebles with the Moorfoot Hills beyond: 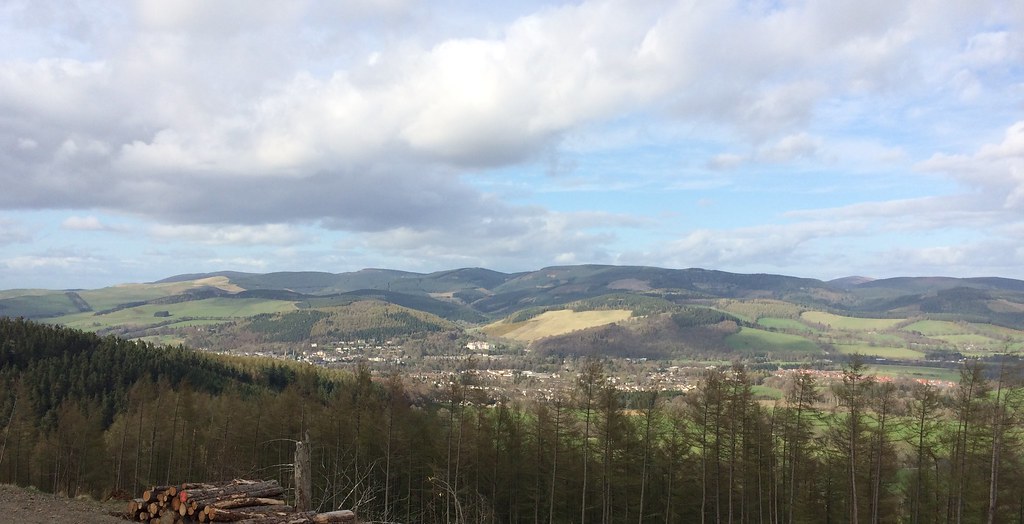 Not bad views from the summit at all, and it is now a really easy walk on a waymarked route (even with a picnic table at the top). However the immediate surroundings leave a bit to be desired - a rather raw looking new path surrounded by hundreds of tree stumps and brashings. It will probably take quite some time for the surrounding ground to soften and look halfway pleasant.

The new path descended steeply and seemed to cut out a rather large corner. Dad and I stopped and waited for mum and Laura, but they didn't appear - by the time I got hold of them, they were already back at the car! Fair to say that the Forestry Commission route maps are now quite out of date. 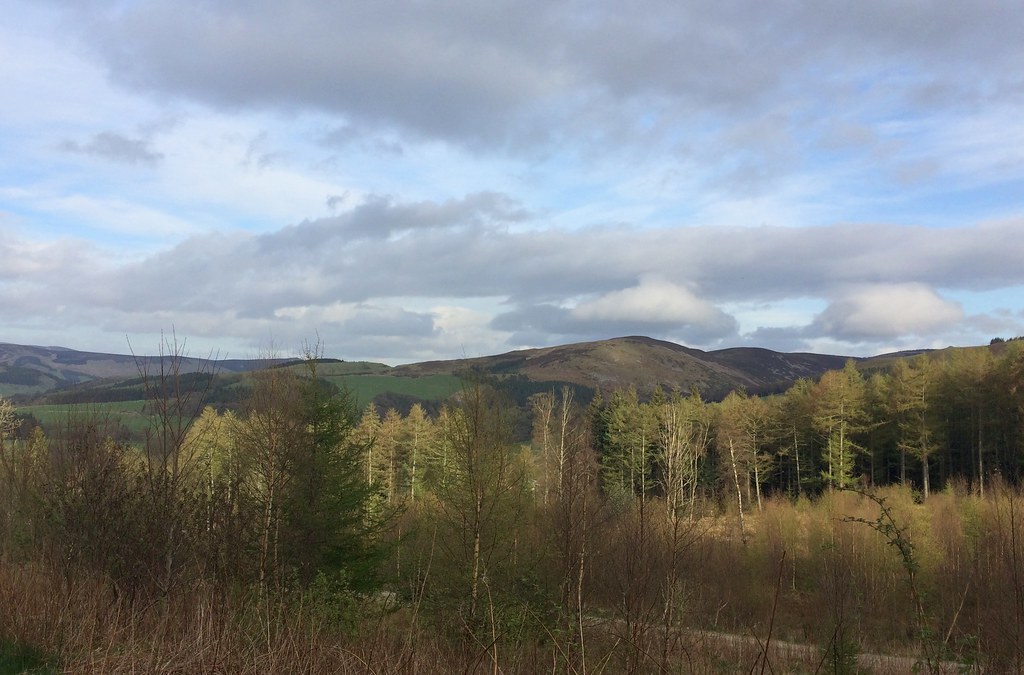 Pavement wrote a song called 'Date with IKEA', and sadly that's what I had on Sunday morning - always a probability when visiting so-called civilization with the car. The song is way better than the reality! However it wasn't too painful, and before long I was heading north over the Forth Bridge in drizzle.

I had a few possibilities for a quick stop-off on my way back up to Inverness, but Bishop Hill was the one I was most keen on. I had looked a the map a few days earlier and thought I had seen all I needed to know about getting off the M90 and onto it. I hadn't really, so took an unnecessary detour through Kelty. Also, I knew there was a path shown on the map going straight up the W face somewhere after Scotlandwell, so when I saw one above Kinnesswood, I turned off and parked at the foot of it, only to find that I should have carried on another half-mile or so to Easter Balgedie. However this path looked decent, so I decided to stick with it.


Bishop Hill.gpx Open full screen  NB: Walkhighlands is not responsible for the accuracy of gpx files in users posts
It is quite an adventurous looking route for Fife (although technically not actually in Fife - I hadn't realized) - a steep ascent topped with a short band of crags. Despite the poor forecast, the rain was nothing more than an occasional drizzle, and I could feel the heat of the sun trying to break through.

A steep ascent past a water tank took me to the crags before too long. 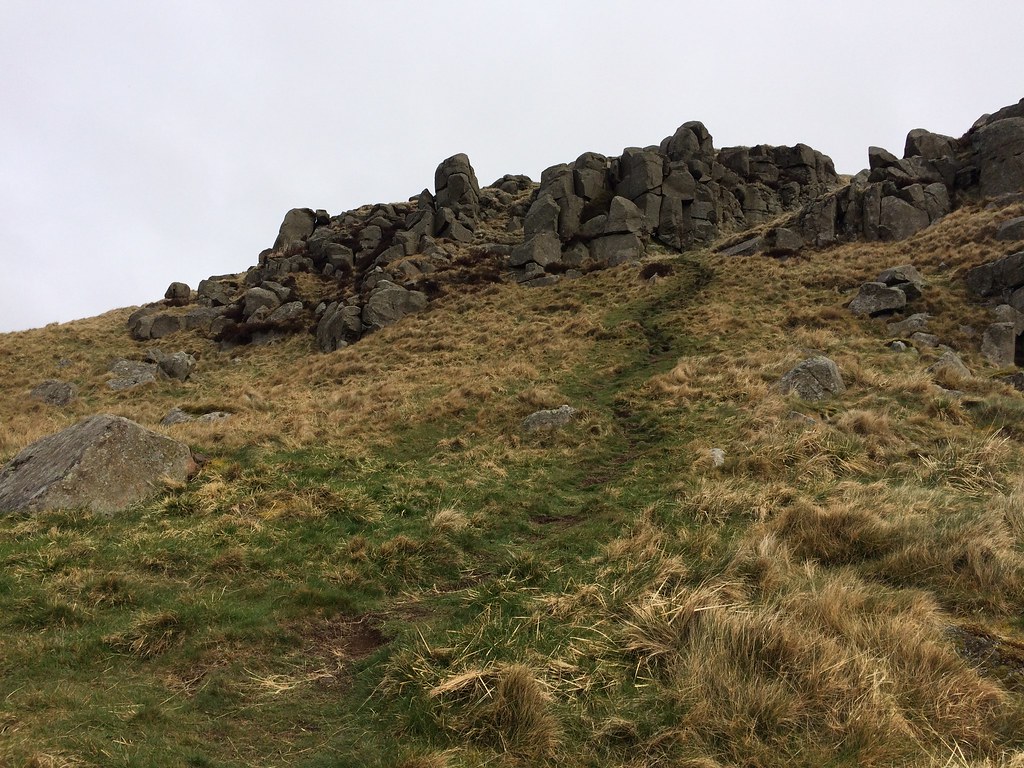 The path slips through a little gully in the crags, then you're on the plateau. There is a big golf ball on the southern summit of the hill - in fact it is probably the highest point. Can't say I've ever noticed this before from the M90. 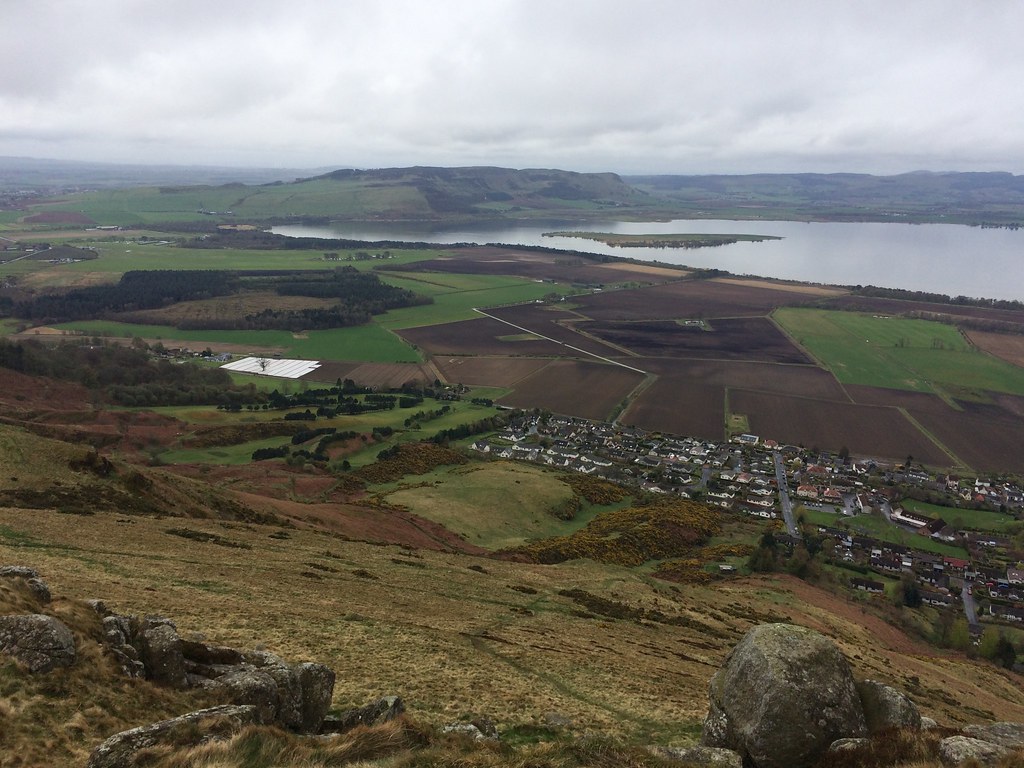 I turned north and made for the highest natural summit. Easy walking up here and wide views across Loch Leven, and presumably to the Ochils if I could see them. I joined a larger path and made for the summit cairn, where the Lomonds burst into view.

East Lomond from the summit: 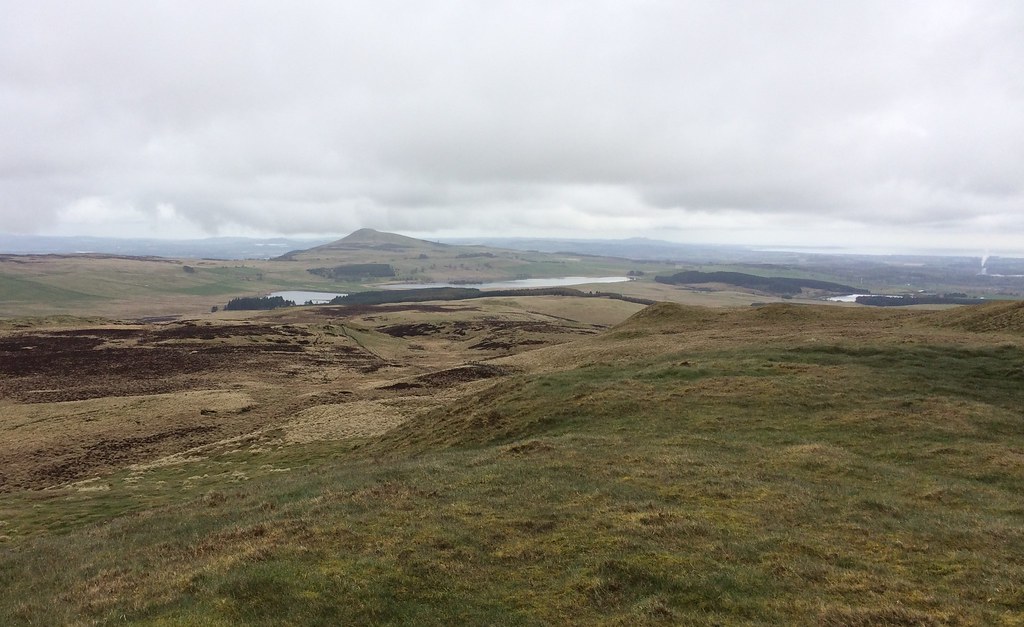 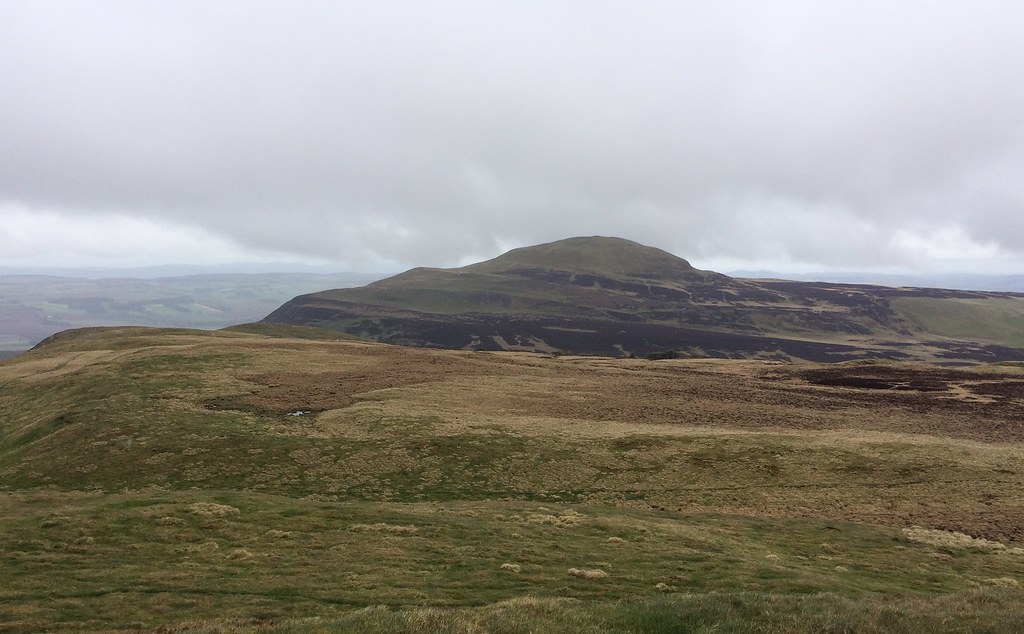 Loch Leven from the summit: 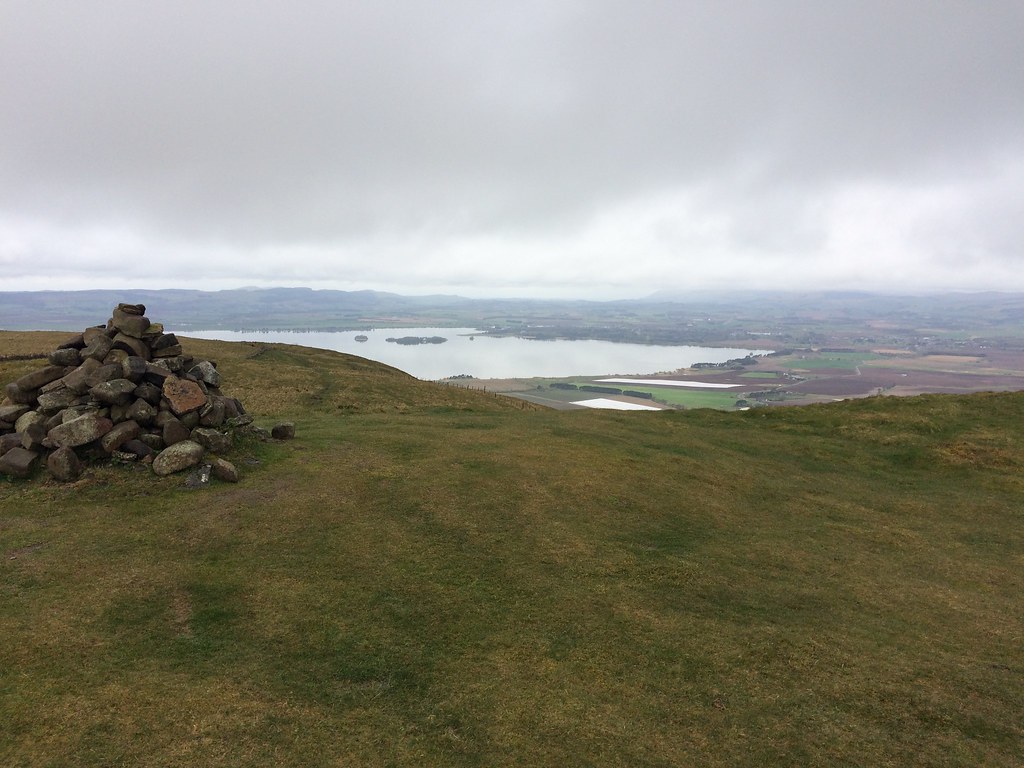 I decided to go back mostly the same way, although I was tempted by a traversing path across the face of the crags that I had passed on the way up. This petered out and left me on narrow sheep tracks, but was an interesting enough diversion, soon putting me back on my ascent route.

Crags at Pinnels from the traverse below: 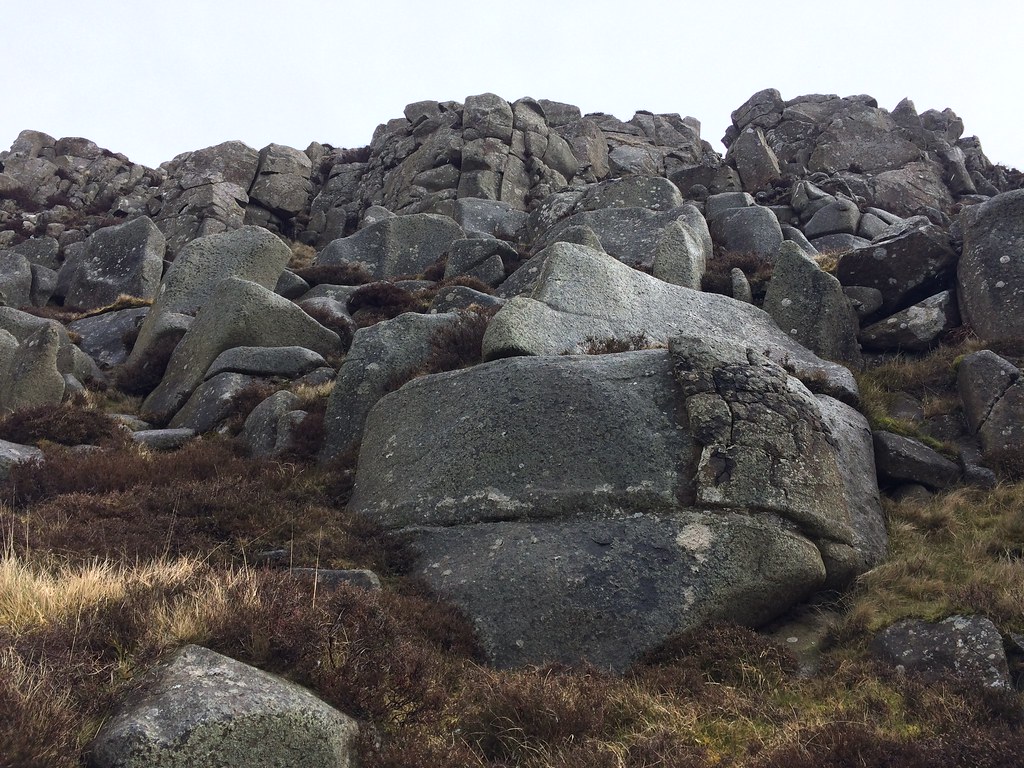 I reckon if I lived in Kinnesswood, I would increase my fitness quite rapidly, as the steep route I took today is easily accessible from the village, and would probably be a bit of a weekly challenge. I'm sure there are more interesting, longer circuits on this hill, perhaps taking in the Lomonds, but this provided an enjoyable hour's diversion on the way back up the road. 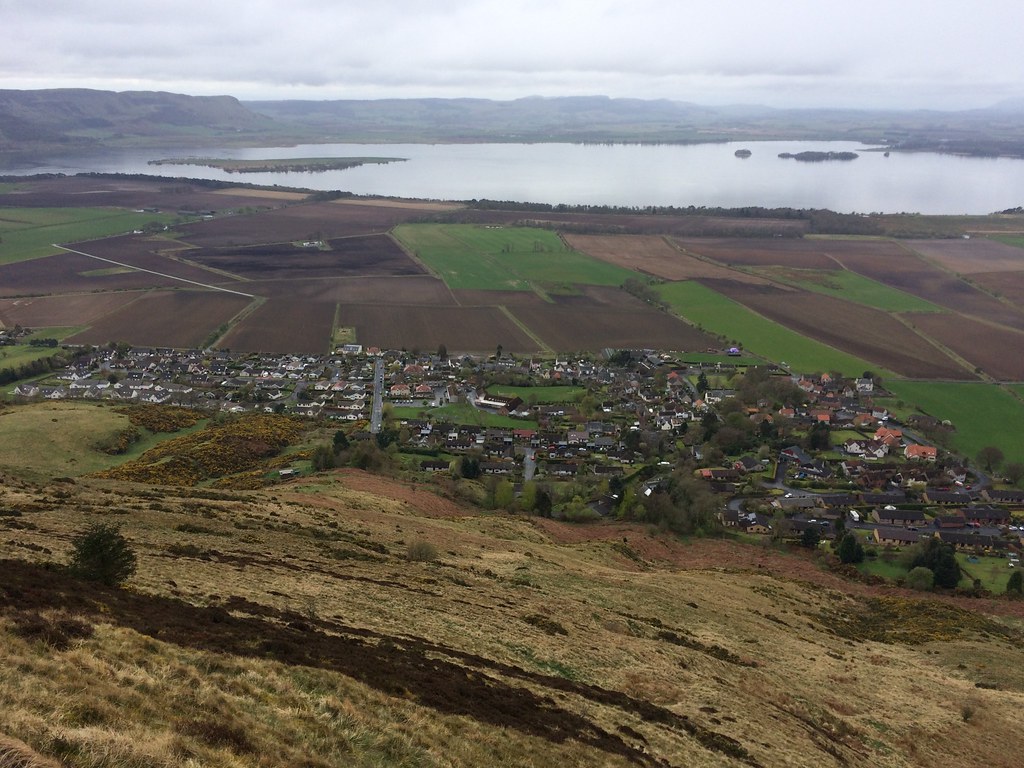 Munros....Corbetts....Grahams....Then sub 2000s...Glad to see that there are always more beautiful places to explore and your report illustrates that perfectly!

I was supporting a long distance horse over Cademuir last summer. They stayed north of the forestry which was definitely more pleasant, as you suspected.