It is funny how some of the days that don't turn out as you plan them end up being the best kind of days. This walk was like one of those. Whilst we never made it to the summit of this hill it will still be remembered as one of my best winter walks. Even the drive to the start was an adventure with trees bent down with snow over the road and several inches of snow to navigate. This meant we were late to the start which was one of the main reasons we ran out of time. That and the fact that we were wading through snow at times on the walk in. All was worth it because the combination of high pressure, cold temperatures and plenty of snow made it a real winter wonderland!

Setting off from the car with the temperature measuing -12 deg C, but no wind, it felt like it was going to be a special day. 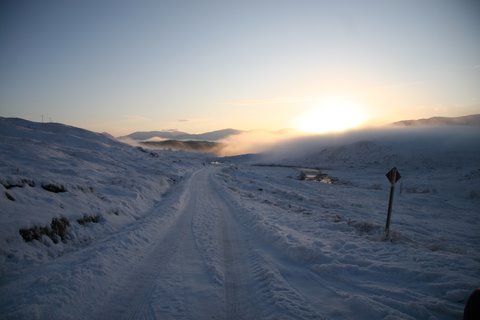 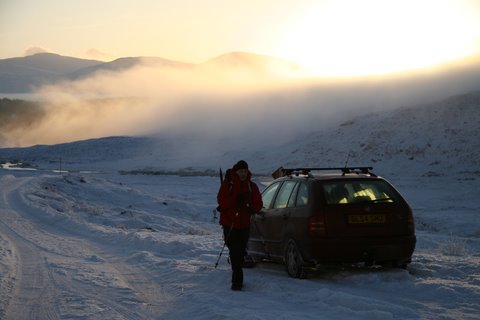 Striking out from the car, it was -12 Degrees C when we left the car

All the trees were clad in snow and everything looked so fragile. By the time we could see Gairich it was nice to compose a shot with both the trees and the mountain we were headed for. 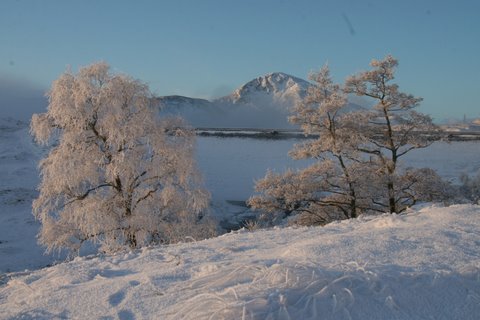 Winter shrouded trees with Gairich in the background

We took time out to check out this frozen waterfall. My friend Neil posed for the shot to give it scale. 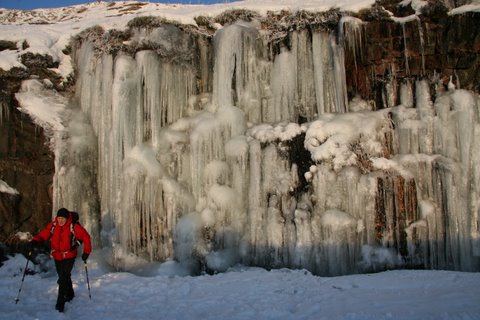 Crossing the Dam was fun with snow drifts to cross. The snow on the wall was 4-5 inches thick. 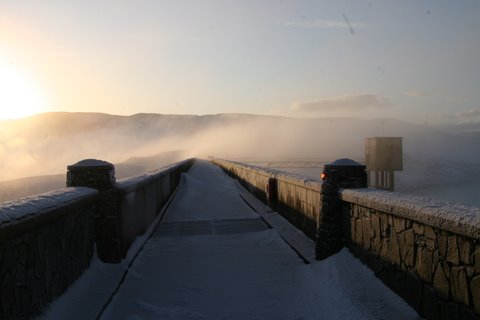 Wading thru snow across the Dam Snow on wall of Dam 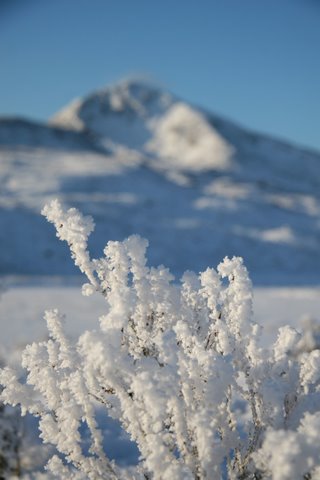 Frozen bush with Gairich behind 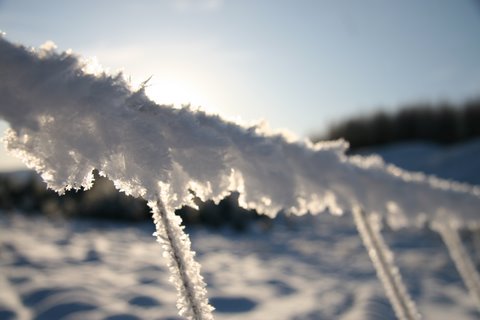 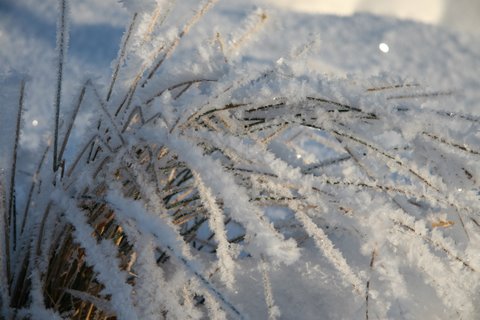 There was hardly any sign of this frozen stream until we were right on it. It would have been easy to wander onto the ice. 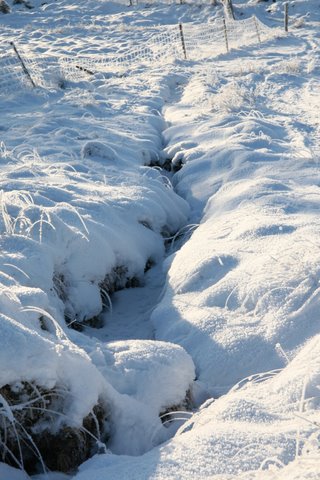 Once we got a bit higher up the wind had blown the snow into drifts which mostly we could avoid so the going was a bit quicker. By this point we were quite a bit behind time. Note the animals footprints beside mine. 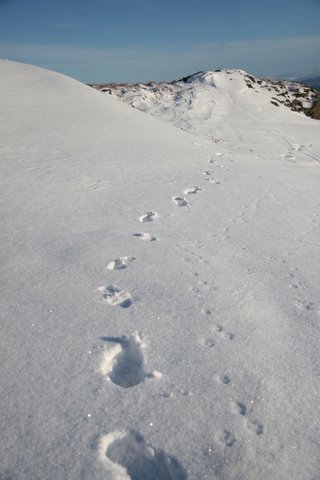 Wasn't too much snow higher up

Nearing the top the snow was still fairly deep and a bit slippery. No need for crampons just kicking good steps. That said it was getting a bit steep and exposed and still powdery giving way a bit. I have done much worse than this in terms of exposure but the cold and snow and lack of day light left meant I had definately had enough by this point. These two pictures were from our turning back point. 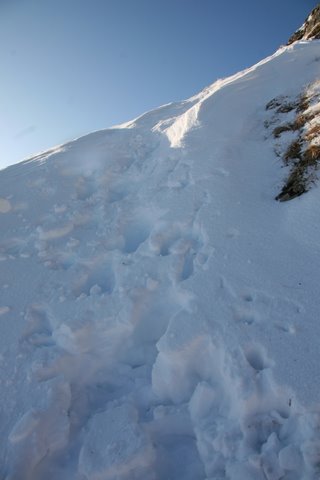 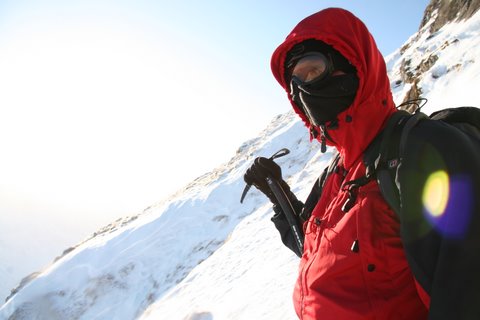 By the time we got back to the car it was dusk and darkening fast. I wouldn't have fancied our chances if we were benighted in these temperatures. All in all a very rewarding day which was partly the reason why we didn't summit. There were so many points of interest along the way that we simply ran out of time. Many good memories once again. A good day in winter on the Scottish hills is hard to beat! 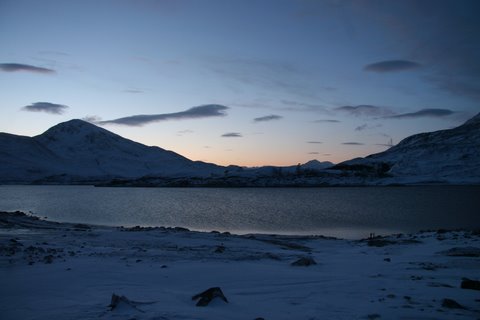 Getting dark before we finished

Makes me restless for the return to winter

Loved the photo of the frozen waterfall & the one above it.

am surprised you even got the car that far. With the winter we had

I'm amazed you got up that road too! I wouldn't have dared try - it's a helluva way. I wasn't driving the February we went up there, a lady in our group was driving about 8 of us up in her people carrier - it did get very tricky towards the dam - she did really well! I got to the foot of that steep nose, gave it a quick try and then totally bottled it - followed by around half of the group who hadn't been happy either. Think they just didn't want to admit to being feart!

Defo not my sort of thing in snow and ice - way too steep at the top! Lovely pics though

But, although the walking can be quite fun, I'll never be eager for winter - I hate being cold and miserable!

Hi Michael,
Nice report with some excellent pictures. Just love that frozen waterfall. I done this one in rain and sleet and it was not much fun. However I would not like to be caught out in those temperatures.

Brave getting your car up there

really love the composition of some of those photos!

bring winter on with gusto!

Michael
Fantastic photos. Thinking of trying it this winter but if there is that much snow on the roads I doubt I would attempt the drive in. Good decision to turn back especially with the fantastic memories.