Slioch and the Slippery Gully

Slioch and the Slippery Gully


We had a fine walk on Slioch several years ago on a sunny autumn day, with superb views, but, we accidentally missed out the summit

, and every subsequent visit to Kinlochewe has been tinged with embarrassment as we admire Slioch in its sentinel position by the side of Loch Maree. Today, at last, we set the record straight

, but decided to experience Slioch in different conditions and vary the route by going up a large gully / small Coire to the right of the large buttress in Coire na Sleaghaich. In fact we went up the a steep gully in the middle of the buttress We set out at 09:00 and followed the standard route to Coire na Sleaghiach. The weather was warm with light rain making it impossible to keep dry, the path was wet and muddy, the rocky sections damp and slippery and the cloud low on the hills. But none of these minor irritations detracted from our enjoyment; The tantalising glimpses of moody Torridon mountains, the peaceful beauty of Kinlochewe River, the impressive buttresses, and
the Abhaino-an-Fhasaigh cascading over the rocks in a deep gorge. Goats and Gorse by Kinlochewe river The short section of the path into Glean Blanasdail seemed much longer than it looked on the map and we were beginning to think we had missed our turning when we reached the small cairn marking it and began the ascent up the eroded path leading to Coire na Sleaghiach. The views across Loch Maree The path leading up Coire a Sleaghiach.

12:00 and we are making our way across the Coire, stopping to have a drink and fill our water bottles on route. The standard route from here makes it way straight across the baisin up the grassy Coire slopes but we headed off towards the buttress where you could clearly see a potential route up its far side. From the map we had anticipated that this would be a steep scramble walk. Not sure exactly why,

but we became distracted by the wide gully in the middle of the buttress, it looked doable and so we did it

not realising that we had deviated from our original plan until we looked at the pictures and the map when we got home. The buttress and our way up

The start of the gully was steep walking on slippery wet grass, but enough footholds to keep you going. The first part of the gully

. There were interesting rocky towers and scrambley excape routes to the left hand side.
As we gained height the gully became steeper, soft slippery snow over wet grass, mud and loose rock with few visible decent foot placements. Ice axes seemed a good idea. Finding a stance to get them out proved a bit tricky as we still had them stashed on the back of ours sacks

but it was worth the wobbly effort

. Further faffing to put the treking poles away was not an option. Pushing on an axe daggered through soft snow and mud on one side and a fist pressed through the snow on the other, slow tenuous progress upwards was made. I am not sure if my the lack of vocal squeaking and swearing meant it wasn't as bad as I thought at the time or it was so scary it left me squeakless

. Himself had a slip which almost turned nasty but he still claimed the gully was not scary just contemplative

. This could be a very nice gully in good firm snow conditions and may make a pleasant easy scramble if dry but is best avoided if wet. There were a couple of enjoyable bands of firmer rock nearer the top and then it was all over. We had lived to tell the tale,

I still can't decide and in retrospect it all seemed a jolly jaunt and great fun. The gully had taken an hour and thirty minutes, it was now 14:30 and I felt all in, but was determined to reach the summit. We were mildly surprised that we had emerged directly east of at the 933 spot point rather than closer to the summit.
We stopped just long enough to add a layer of clothing, it had been snowing on and off for a while and was definitely a bit chilly on top. Walking past the Lochan It was late, snowing and everything covered in cloud but we were delighted to finally be on Sliochs summit, we were determined to savour the experience. Time for Jeremy Jetboil to strut his stuff and come up with a good brew. Warmed by a hot drink and dry gloves

we were ready for the ridge to Sgurr a Tuill Bhain. There was no rushing the ridge with slippery conditions underfoot, and we amused ourselves taking endless pictures of the nothingness. It was 16:45 so we didn't stop on The final top but headed straight off the other side. There was no sign of the cloud clearing and I think we probabley went a very long way round, zigzagging about as made our way down. Back across Coire na Sleaghiach

It was 19:45 before we were back on shores of Loch Maree and we stopped for another brew up. One of the advantages of being slow is being out in the sunset and today we were well rewarded for our efforts. 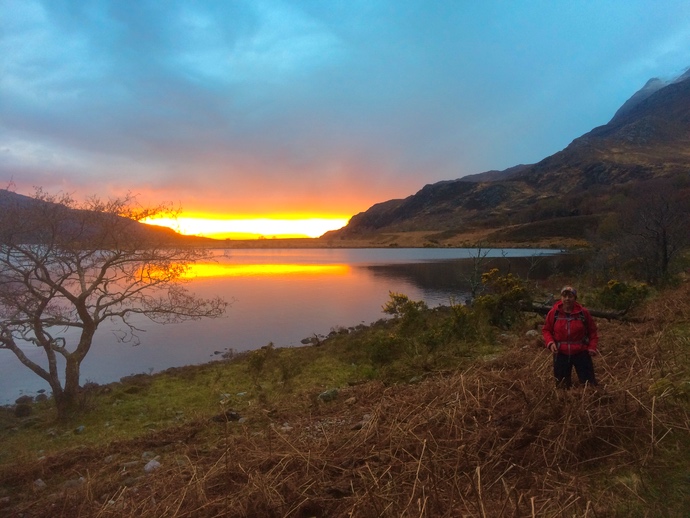 As we wandered back along the path a number of stags ran across our path leaving a hind trying to hide behind a tree. Distracted by the display we wandered of the path and our second navigational error of the day. Luckily it still wasn't dark as we strayed rather a long way towards the crags before spotting the path below us near the river

.
It was 10pm before we were back at the car and at last we can hold our heads up in Kinlochewe.

know that "should've got the ice axe out earlier" feeling too

It's a fab hill though isn't it, definitely one to return to

Nice alternative route to the normal, and an enjoyable report. That's the sort of thing we like to do, find a moderate gully to climb on the way up. I too know all about the "decide to get out ice axe (and/or crampons) when already fully committed and balancing on one leg on a foot sized ledge whimpering softly" moments...

Hi Jaxter: it definitely is a wonderful hill both with views or atmosphere. A day doesn't feel complete if you get back before sunset

Hi Mal: Does make it interesting to choose a different way up, even if it's not the route you thought it was