Sunday morning, and a completely different kind of day from the one before - sunshine mixed with dew so heavy it almost looked like frost. The hostel is tucked right into the valley and has a wonderful view up to Pillar, but all my photos of it have the sun in their eyes! 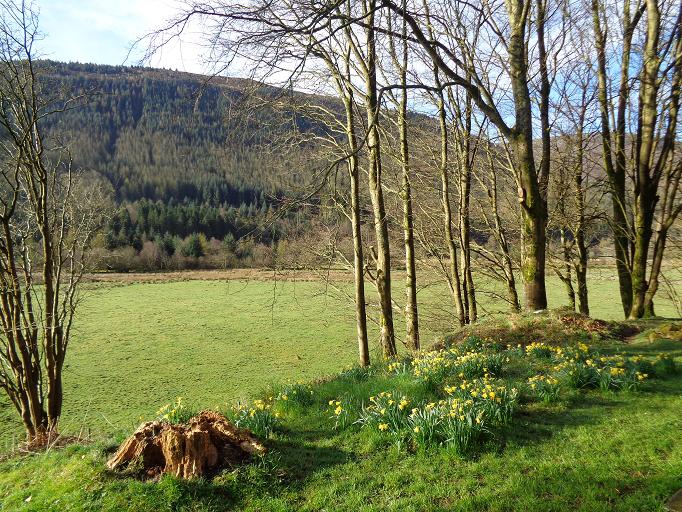 A fairly early start, and I was heading for the one gap in the trees on the smooth Buttermere side of the valley - a far more cheerful looking place than I'd expected from the map, with a little path winding up over the grass. 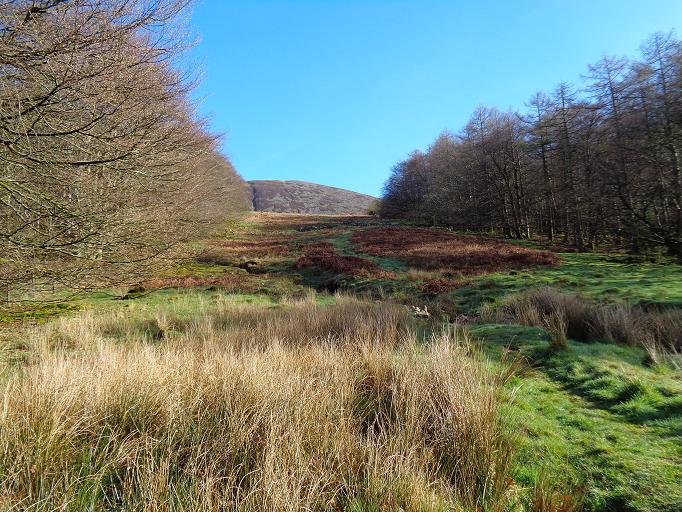 The gap in the trees

The views to the other side of the valley were shifting as I climbed, with Steeple becoming more prominent. 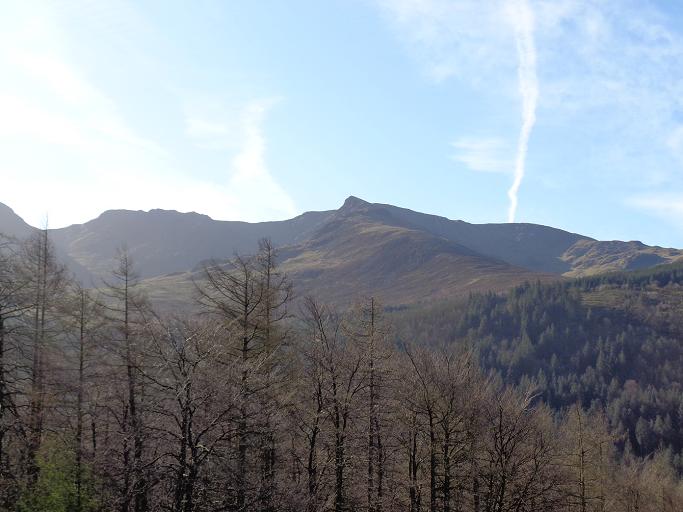 Up above the trees there was also a good view back to some of yesterday's hills, showing up much more clearly now than they had when I was on them. 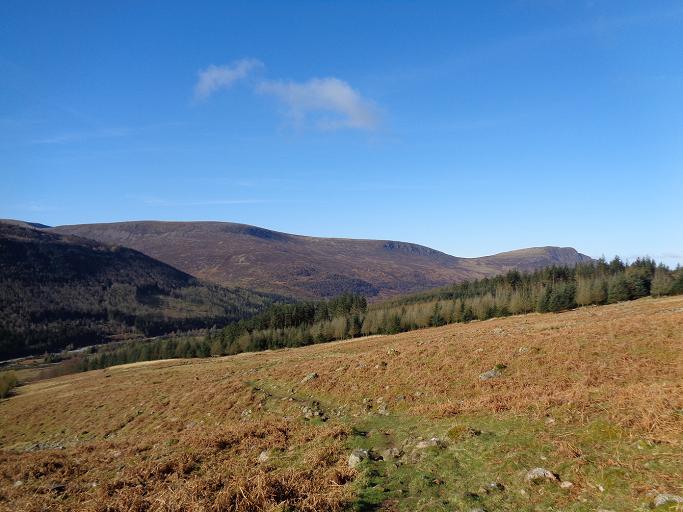 Above the trees the path wandered over to follow the stream - according to the map I should have crossed it at some point to follow a good path towards Red Pike, but as this seemed like a long way round I was pleased to find that a smaller path kept following the stream. 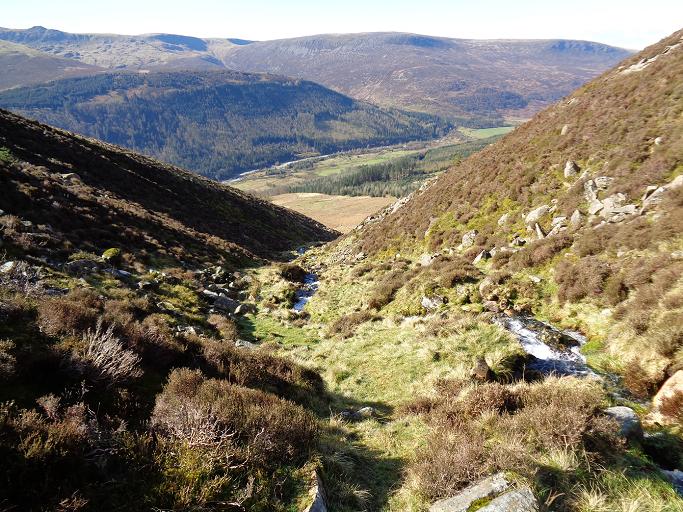 Up by the stream

As the slope eased off and the stream faded into the grass the path faded too, as they so often do - Red Pike was now towering quite impressively above me to the right, but I was cutting across to the left to the far less imposing summit of Little Dodd. 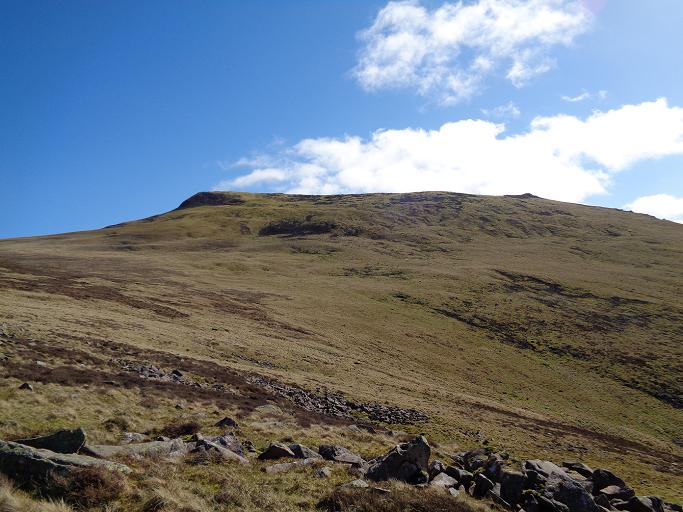 Although it's only a tiny bump on the ridge, it has quite an impressive cairn - very artistic. 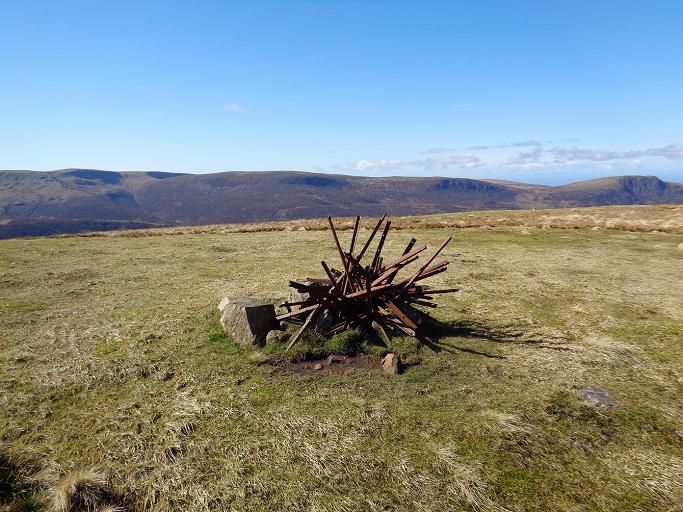 Ahead and to the left I was now looking to the plains and sea and low hills, but I'd gained views to the north to make up for it. 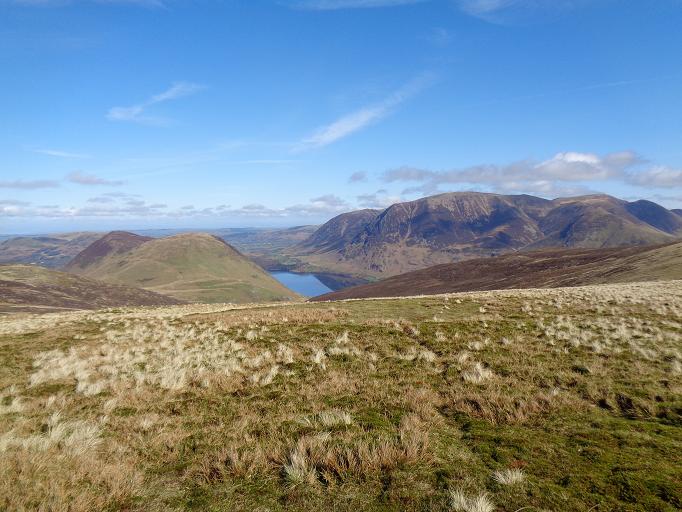 The summit of Starling Dodd was only a steady climb away - its cairn is slightly less artistic, but more demonic. 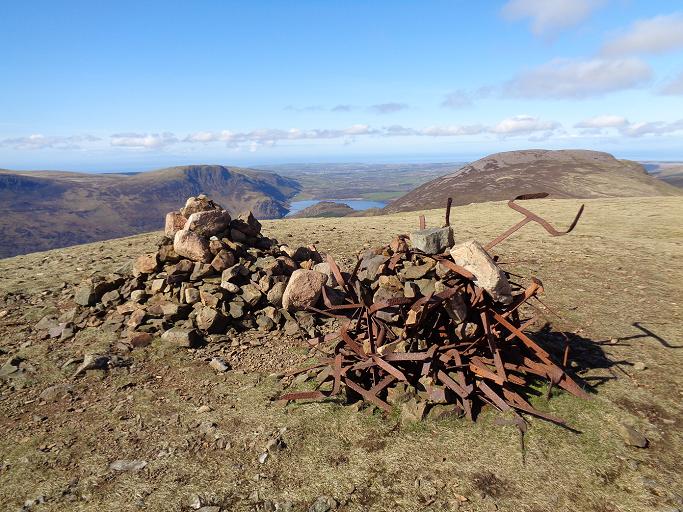 Great Borne was not much lower, but there was quite a dip in between - a fairly steep descent first, and then a trek over slightly rougher ground, where the path dodged to avoid a triangle of ground fenced off for conservation. 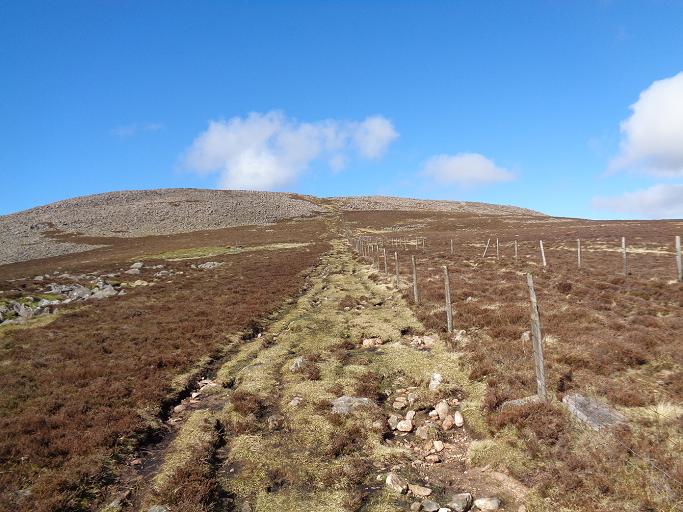 The fence leads on up the steeper climb to the summit - a choice of two, but the higher left hand one has the trig point. Here I met a lady waiting for her husband who was rescuing tadpoles from a puddle and relocating them to a bigger pond! My planned descent to Steel Brow was one of those things that you think should probably work - not on Wainwright's map, but shown as a pathless dotted line on one of the diagrams. As a way down it was a bit steeper than I had realised - as well as having a very boggy approach. The steep way down to Floutern Pass

Still, a cautious descent by the fence got me down, although with a grazed ankle where a stone had shifted under my foot and left it jammed under another rock.

Floutern Pass was a busier place than I had expected, with several small groups passing through - four or five people passed me to start on the climb by Steel Brow as I came down, although until then I had only met two people all day. It was a very wet place, too, especially around the gap in the fence, although I've been in worse.

My original plan had been to head over Hen Comb, but with its reputation as the only fell which could be cut off by heavy rain this had been doubtful since I'd seen the Ehen over its banks the day before - going over the three linked Loweswater fells seemed like a better idea, since I had the time, and would make a later day easier too.

On the other side a little trodden path led up by the fence, with the shark's fin of Floutern Cop standing out very distinctively. Although still slightly wet, this was quite easy - a fairly gentle climb with only one steeper patch, which for once brought me out at the summit before I expected it. Down by the fence and up again onto Blake Fell, with a family following me from the path over High Pen - it's not so much higher, but it's definitely a more substantial looking hill. As I moved north the views were improving again, and I could now look right up Buttermere to Fleetwith Pike A view up Buttermere

I had a better view of the Grasmoor fells too, now looking over the farmland around Loweswater, rather than over high ground in between. This was another summit that I reached before I excepted to - these hills were really nice walking for a sunny day, never turning into too much of a toil. It had lovely views as well - the hills to south and east, but also over the flatlands to the sea. It's impossible to get confused on the way down towards Burnbank Fell, as it's another case of following the fence, but I managed to get confused anyway, as Carling Knott is so much more obvious. Concentrating on the fence sorted out my geography, however, and brought me down to the short climb to the summit of Burnbank Fell, another little end-of-the-range summit in the corner of a fence which reminded me a little bit of Grey Knotts, although much smoother. From here the view was all about the Solway Firth, with the Scottish hills showing not just as the usual line against the sky, but as definite land and more distant layers beyond. By now you've walked right away from Ennerdale or Crummock Water and come very much into the realm of Loweswater, and my descent was towards it - down by the path to the cairn, and then instead of a very steep descent to the wall, following a tiny new path which takes a more slanting route. From the top field wall I took the 'terrace' path - a lovely route - which leads along to the tracks through the woods down to Holme Force and out to the good lakeside track - with the very distinctive National Trust trick of leaving the tiny fords through the streams in place and building tiny bridges to one side of them! - and along skirting Loweswater to heading up Scale Hill to the main road and the bus - I thought I'd just missed the last one heading round the short way, but should have plenty time to meet the one going round the long way, and walked up towards Lorton to meet it. 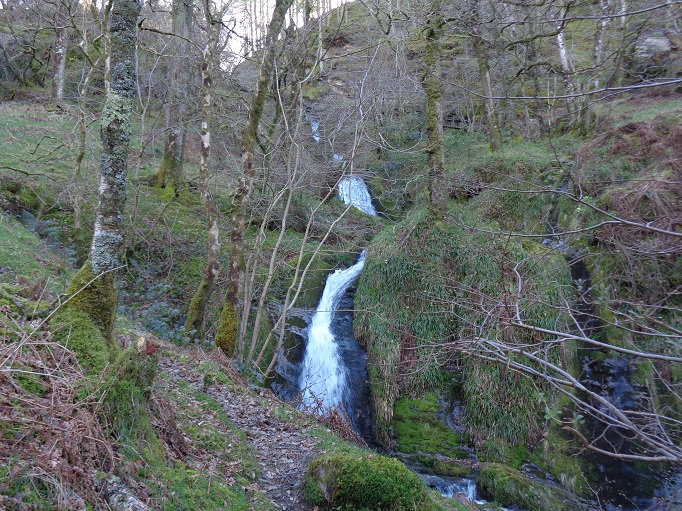 The only problem was that there was no bus.

I had been absolutely convinced that it started from the beginning of April - and to be fair, with early Easters the last couple of years, I think it always has anytime I've looked. Still, I was sure I'd checked for this year, and it was a daft mistake!

The even more annoying thing is that if I had known I could still have done almost all of the same route, just walking out to Cockermouth by the Mosser road to catch the bus there. Still, the pub in Lorton supplied me with a taxi number, and got me back on track, so it wasn't the end of the world. I'm annoyed with myself all the same, though!

Cracking weather and some fine hills and views, looks like a super day out.

Another good walk and pics so well done you

A wonderful day weatherwise on which to enjoy this lot! But weird weather this year...

You learn something new with every report you read - I'd never heard of Flouter Cop (what a name!) but it looks pretty sexy.

The hedgehog artwork on the summits reminded me of those on the Glen Lyon North Ridge - are you sure you didn't take the pics there...???