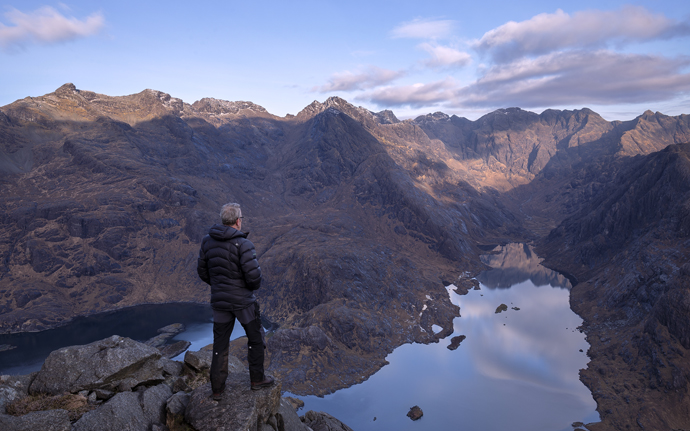 I had been planning a photographic trip to Sgurr na Stri (SnS) on Skye for over two years and had made two previous attempts at it, each time being beaten back by the weather. On both those failed attempts I had tried to walk in from Kirkibost / Kilmarie (the short route), but on arrival at Camsunary Bay the river was in flood and the hill top was shrouded in cloud, so I ended up camping beside the old bothy.

I was determined not to be beaten this time and took the decision to walk in from Sligachan (the long route) when a weather window presented itself. Easter Sunday / Monday looked good and I set off from my house, arriving at Sligachan about 1500 hours. I keep telling myself that I need to reduce the weight of my pack, and never take my advice, this time I added a drone to the pack and my new tent. I stood on the scales before I left the house and groaned when it weighed 25kg (55lbs in ‘old money’). After I arrived home from this trip I critically examined everything I carried. I used everything I took on the trip, which is always depressing when planning future ‘expeditions’.

Anyway, setting off from Sligachan I made good time. Passing Lochan Dubh you get a first real glimpse up through Harta Corrie of the majesty of the Cuillins and the sights to come, with Sgurr na h-Uamha and Sgurr nan Gillean to the right, Meall Dearg to the left, and Sgurr a Mhadaidh and Sgurr a’ Ghreadaidh in the distance. To my left the sun was shining on the slopes of Ruadh Stac, but the top of Bla Bheinn was shrouded in cloud and Corrie Dubh was living up to it’s name, however the peaks of Clach Glas were visible. Arrived at the bottom of Druim Hain after two and a half hours, not the quickest, but I kept stopping to take photographs (and ease the increasing strain on my shoulders). My torn left Achilles was holding up (so far) and my right foot (I had torn the big toenail clean off (ouch) coming down the Big Boochle about 3 weeks ago), wasn’t too bad (so far). 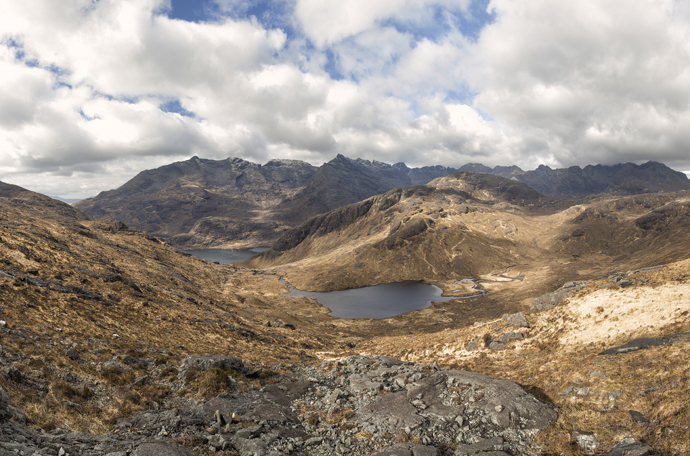 The path was very good, if a bit boggy in places due to overnight rain and I made it to the top to the big stone cairn (where the path divides for SnS or Loch Coruisk), at the foot of Sgurr Hain with relative ease. Taking the left fork for SnS the path becomes less visible and can frequently be lost to sight further up, if it weren’t for the previous footprints that others have left in the mud. I was becoming increasingly tired and had a stop at the bealach at the foot of Sgurr Hain (where the alternative route from Kirkibost comes up to meet the path) for a rest and some more photos. I could just make out the old bothy (beside which I previously camped) in Camasunary Bay far below. By this time, it was about 1800 hours, need to push on and get to the top of SnS for 1900 hours, find a camping place and get some photos taken before sunset. 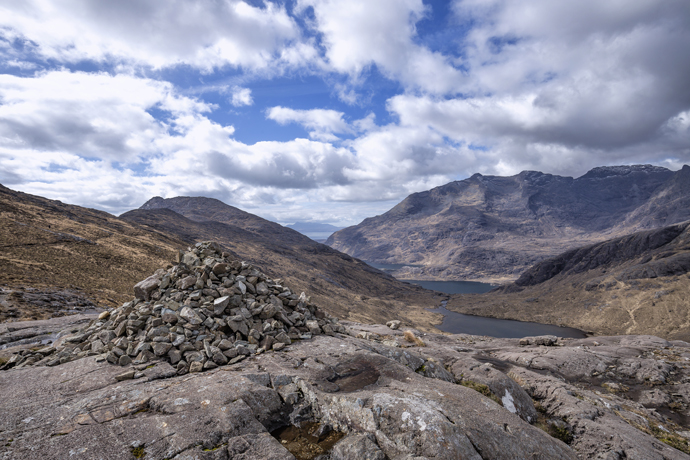 Cairn at top of Druim Hain, left for SnS

There are various pathless paths up to the top of SnS and I took the one which seemed the most obvious, occasionally picking up on a faint path and more muddy footprints. I arrived at the top just after 1900 hours. A 4 hour slog, and I was really knackered. The small sliver of ground which I had been planning to camp at (after looking at other people’s photos) was taken by a young couple, so I found a relatively flat spot right on the cliff edge about 200 metres north from the summit cairn to pitch my tent. Priorities first though, the light was fading and I needed to take photos.
The wind had picked up and I spent an ‘awkward’ time trying to get my tent up in the wind, but eventually managed. One problem is the lack of depth to the soil on top of SnS, my tent pegs kept hitting underlying rock. I managed to peg the edges of the tent, but the guy lines were wrapped around large rocks which I positioned for the purpose. It was stable enough and I was glad of the new tent – geodesic – designed for two, three at a push, one if you’re antisocial like me. I like to spread myself. Time for coffee, beans and sausage, pasta carbonara, and chocolate – I was ravenous. Then the highlight – sitting on the cliff edge watching the light slowly fade over the Cuillins, Rum and Eigg, with a hip flask of Talisker Storm single malt whisky and a nice cigar. (On a previous post I said I always took an appropriate malt whisky on camping expeditions – what else would you take for a wild camp on a mountain in Skye but Talisker Storm?). My pitch for the night My camp, what a view to wake up to. Moonrise over Eigg and Rum 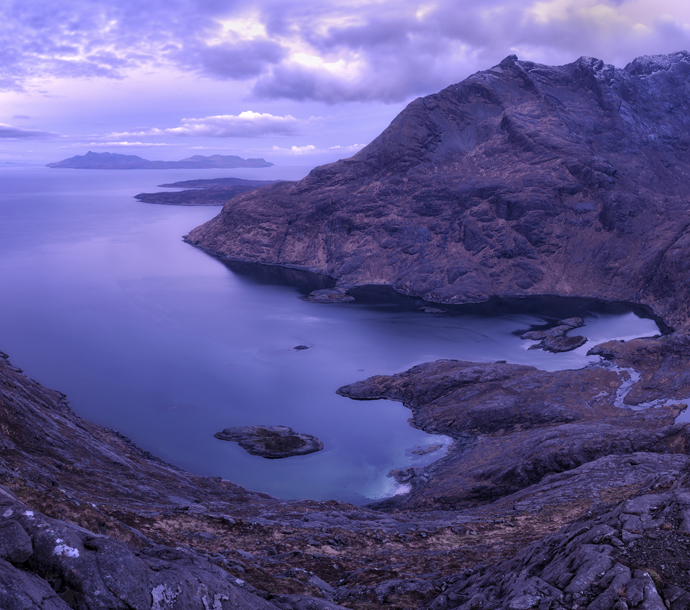 Rain during the night pattering against the tent woke me and I feared for the dawn. But my fears were unfounded, about 0300 hours the rain stopped. I had set my alarm for 0500 hours, sunrise at 0610 hours. Up, dressed, morning coffee by 0530 hours and ready to go. Seek out the best location for the camera position, right on the cliff edge looking directly up Loch Coruisk, about 10 metres downhill from the tent.

The Best view in the UK

God must have been a mountain climber and photographer in a previous life (is that possible – does it even make sense? God knows). Because the morning was spectacular. I spent 3 hours taking photos. I used the drone once. I kept getting a magnetic interference signal, the rocks on the Cullins and SnS are magnetic, which throws the drone’s compass haywire, but I managed some video and photos from the drone. But the main point to the trip was photography and I got some great shots. The Fortress of Shadows I noticed that Snowdon in Wales was recently voted the best view in the UK, but you can take a train to the top and tens of thousands do it every year – hence the number of votes. So few people wild camp on SnS to catch the dawn sun lighting up the Cullin ridge, that it gets few votes. I have been to many spectacular locations in Scotland and the UK, but this must be one of, if not the, best viewpoint in the whole of the UK. The Towers of the Teeth The morning boat from Elgol

I packed up at 1000 hours and began the long trudge back to Sligachan. Coming down off SnS is easier (obviously) than going up, but the trail is also clearer as you can see it more easily. By the time I was half way back I was tiring rapidly and my feet were really beginning to hurt, my Achilles was very sore and the toes of my right foot felt a bit ‘squishy’. Taking off my right boot my sock was red with blood. I decided to leave in in place, put the boot back on and struggle back to the car. Got back to the car at 1430 hours, totally spent, shoulders aching, feet more than a wee bit sore. Then the 5 hour drive back home, forgot about the Bank Holiday traffic jams. Lay in a very hot bath with glasses of red wine. Could hardly move the next day I was so stiff. Typing this a few days later, the pain is gone but the memories of a spectacular ‘expedition’ remain. Morning coffee with the Best View in Britain

Snowdon is my home turf; I must have been up there 50+ times, most recently yesterday with my grandson. And the views were indeed amazing.

But the views from SnS are simply the best: "there nis namore to seye" as the poet said.

You got perfect weather. It was pretty fair when I was up there, but the Cuillin peaks were shrouded in mist (but one still couldn't avoid the conclusion that it was the best viewpoint on the planet!!).

Stunning photos, makes the aches and pains worth it

Particularly like the shot zoomed in to Sgurr nan Gillean etc, otherworldly mountains...

Cannae wait to do this myself. I did have a laugh at your big pack, I tend to overpack too (would rather carry extra than need something I haven't got

) but you do really feel it!

Outstanding views and your reoprt and photography is top notch , cheers

Great report, one of my favourite spots. Watching the sun coming up and filling the Coruisk bowl is not to be missed. Hope the aches and pains have cleared up , getting those photo shots make it worth while.

Amazing - first photo and it just kept getting better.

There's no way that Snowdon even comes close!

Absolutely stunning photos of amazing mountains from a special spot. I really want to go there now, it's often the wee hills next to the big ones that enjoy the best view, none more so than Sgurr na Stri. I agree, I don't think i've seen a finer viewpoint in the country.

In that last photo you could be wearing a Hobbit outfit and not look out of place!

Love the campspot too.

great pics. Do you know if it's possible to Mountain bike the long walk in section from Sligachan? thanks

Wow,,,always think of the peaks on Skye...but your photos are amazing.Might have to have a rethink next time I'm on Skye,as to where to go..Thanks for posting. Your photos have just made me go wow