Catching up on my trip up north and round the west coast to Skye.

So my first day on the road with my sister and nephew, where we spent the day at Landmark before heading further north to find a campsite. Typical as it goes i was coming down the fire tower stairs at Landmark, when my knee starting getting sore. Not sure if i twisted it or what but it wasnt a very promising feeling with a few good days of walking planned ahead of me. Oh well nothing for it, get some food and sleep and hope all feels well the next day.

So up early, packed up at the campsite and on the road towards Klibreck, found the layby easily enough and got ready to head off. While the layby was easy enough to find the land rover track was another story, in the end I bite the bullet and decided to head straight towards Cnoc Sgriodain where the path went up. This first section was fairly boggy and very wet, so our feet and trousers were soaked in short order. Its a whale alright, even with a large chunk missing in the cloud! she's a big one

We reached the Cairn at Cnoc Sgriodain easily enough and headed onwards dipping down towards a big ol pile of peat hags, it was at this point we seen around 50 deer running infront of us. My what a speed they go at, I only wish my legs were as fast and nimble going uphill lol. Alas my camera was deep in my pack at the time so never got time to snap some pics of them, but we did spot a smaller group to our left which i was starting to take pics of just as a family came up behind us with running shouting children. That was all the warning the deer needed and scarpered fast as lighting so my pics of them were not great in the slightest. We decided to stop for lunch here to let the family get further ahead and to fuel up for the peat hags. We made it through the peat hags in one piece and headed up once again. The going was fairly easy and my knee was going ok uphill with only a slight twinge. The views started getting good as we made our way along the long path. 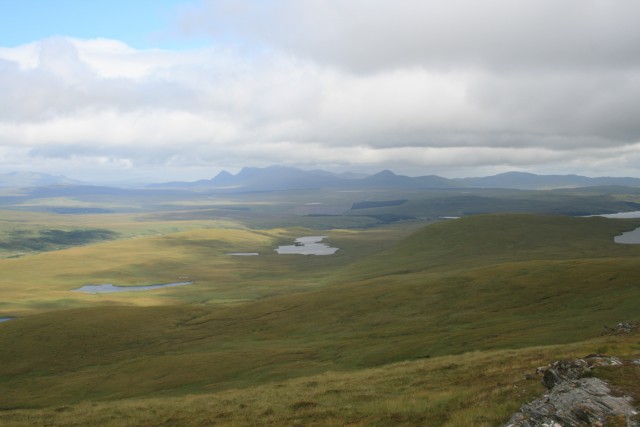 Final pull and we were at the top, very wind and cold up here but the cloud had lifted so the views were pretty good, we stopped here for about 10mins while i had some coffee and enjoyed the views. We had some intermittent cloud but it never lasted any length of time at all. Loving the clouds up here Very windy and cold at the top The long route back

Well time to start the journey back and boy did my knee really not like going downhill. Made good time none the less to get out of the wind. The long path seemed to take forever though, then again followed the peat hags once again which my knee started to protest mightily at all the steeps steps. Back to the top of Cnoc Sgriodian and energy was at a low and it was all downhill. The slope down was like a long steep, wet, knee crunching slog, but finally it was over and we were on even ground once more. A short walk later and we were at the car and back in some nice dry warm clothes and I quickly set about the bag of haribo in the glove box:)

We headed up to Durness and the campsite Sango Sands that i stayed at the year before. Love the sea views from the cliffs there

The plan was for Ben Hope the next day but with my knee giving me grieff we decided to spend two nights and have a day resting my leg. Wise choice indeed as we got to enjoy Cocoa Mountain

where i had some amazing Mochachino coffee and got some lovely truffles. We also explored around the area a little visiting a few small towns further south.

really enjoyed Ben Klibreck even if my knee was killing me. when Paul describes it as a whale of a mountain he wasnt lying at all. Well off to Ben Hope after my days rest which really helped my knee huge amounts but i'll save that for the next report

NIce report Ross, well done for continuing with a dodgy knee. Do you wear or take any support bandages with you.
I usually carry a knee and ankle support - just incase. Explains why my pack is always heavy, full of just incase items.

Well at least with Klibreck, you could roll back down... nice soft landing in the bogs at the bottom too!

Hey Skuk007 thanks for the comment. nah i dont wear or have any support bandages. Was the first time my knee has been abit dodgy. Been fine since aswell. Id did Ben Hope 2 days later which was a little tender on it then Conival and Ben More Assynt the day after which filled my knee a fair bit, but think i just knicked it abit at Landmark before walking lol.

Hi Ross,
Thats a nice route you took (Its mine hahaha). I done this last year and it wasn't so boggy. Well done on doing the northern 4.

Watch that knee. It may be downhill walking thats causing the problem. Hopefully you have just caught it as you said and all will be fine.

Get some auld mans poles hahaha

Hi Monty, cheers for the comment, yeah i really liked the northern 4, all really diff from each other but good at the same time. Think my fav had to be conval and ben more assynt. haha i wish it wasnt as boggy, mind you others have been worse.

haha yeah i'll be keeping an eye on it

lol iv got those old mans poles just not used them in ages, cant make my mind up if i like them or not or if they help me much, need to try them on a walk iv already done to see if i feel it was easier or about the same.

Did this last year and it was the boggiest walk I have ever done! Nice views from the top, though.

Yep - was one of the boggiest we've ever done too!