I'd been asking around on walkhighlands about the state of the remaining snow in the West Highlands. Despite a few recent dustings the general consensus seemed to be that there wasn't much left, so with a good forecast we planned to tackle Beinn Bhuidhe for Easter Monday. The morning didn't start off too well. Firstly we were late in leaving (9am!), and secondly, the weather forecast from the night before didn't seem to be panning out. Overcast skies above Glasgow instead of expected sunshine, and the BBC now suggested it would remain that way until late afternoon in Cairndow, at the foot of the hill. We like to save the hills for sunny days, but went for it anyway as MWIS still seemed optimistic for blue skies.


Beinn Bhuidhe.gpx Open full screen  NB: Walkhighlands is not responsible for the accuracy of gpx files in users posts

The car park was mostly full when we arrived around 10am - nice to have such a short drive! Risking delaying our return time even more, we planned on popping into the Fyne Ales Brewery (handily on the walk in to Beinn Bhuidhe) for a tour on the way up, but they weren't running any until mid-afternoon. Never mind - past the cows and along the glen instead. Hundreds of red deer in an enclosure to the left: 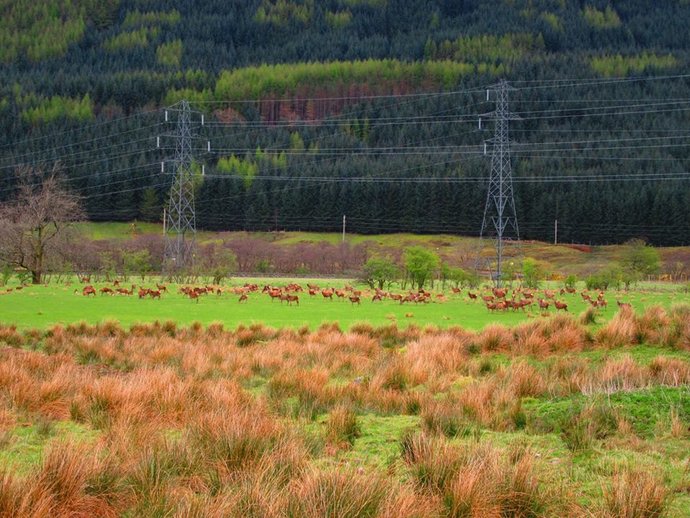 A little further on we had an encounter with Beinn Bhuidhe's guardians, which I'd seen in a couple of walk reports beforehand. They had calfs so we took to the rather boggy hillside to the right. A speedy cyclist came up from behind and suddenly found himself in their midst before deciding to follow us. Soon back on the track beyond the cows and the cyclist zoomed off ahead - we were now officially the slowest walkers in the glen...

Apart from cows and deer, this part of Glen Fyne isn't especially scenic, and it's spoilt further by large power lines. After a bit they marched off over the hill to the east and our track came down to the River Fyne, crossing it and following the far bank a bit more closely. Better views now, though still mostly cloudy - though the base had lifted off the surrounding hills, which was a good sign. 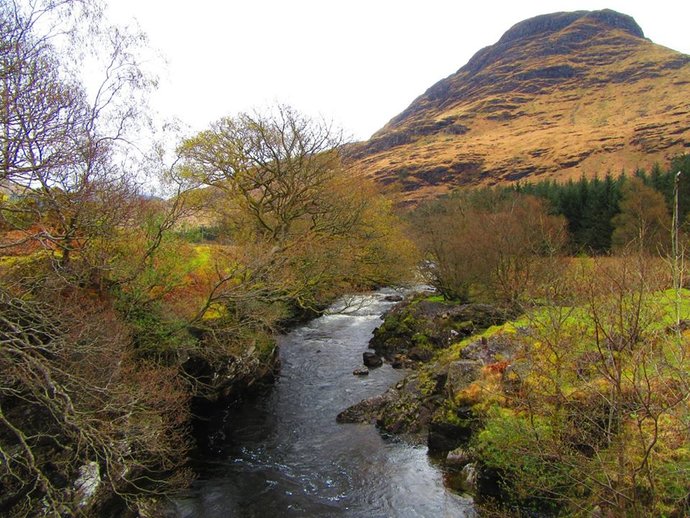 Past the houses at Glenfyne Lodge - what a lovely (but remote) place that must be to live - and onto an older, well-made track as the tarmac one crossed the river again. Our track passed through some beautiful woodland, with a few chinks appearing in the cloud cover: The track left the woods, with some impressive waterfalls on the river below (but no easy way of getting to them). Lookng ahead we had our first proper view of Beinn Bhuidhe, with just a dusting of snow on top. Immediately after passing the abandoned cottage at Inverchorachan, a broken gate marks the point at which to turn left onto the hill path. The start of the path is slightly faint - if you get to the bridge over the Allt na Faing, you've gone too far.

The path up from here is great fun - rough and narrow, occasionally a little wet, an odd hand needed in places, but with great views all around. The burn is interesting too - almost a continuous succession of waterfalls in some places. Towards the end of this section there's a slightly more serious scrambly section to traverse a rock wall. The rock is grippy and there are plenty of good holds, but quite a big drop below so you wouldn't want to fall off. Here's a pic from below - the slope from left to right feels a little steeper than it appears here. After this section the glen opens up (we had lunch by the burn here) and the path ascends further to the left: Looking at the map I was slightly surprised we were still at the 500 metre mark - it's been a little while since we've started from sea level! The path gradient relents a little and becomes slightly wetter, before suddenly meeting a particularly ugly track - we weren't expecting to see this. 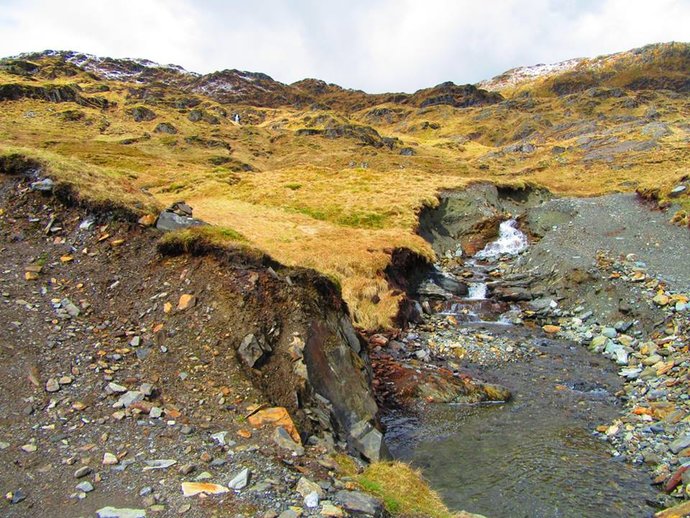 The hill path continues upwards (follow the track right for a couple of metres before a small cairn marks the point at which to turn off again) - lots of frogs round about here, including dozens - maybe hundreds - in a shallow lochan further up. Over a shoulder and Beinn Bhuidhe still looking lovely. Fairly sunny too: At this point we started passing walkers on their way down - we definitely weren't fast today! There's a final steep climb from about 700 to 850 metres, with plenty of running water on the path when we were there (snowmelt?). View looking back: There were few patches of snow around from 700 metres upwards, with the proper snowline coinciding with us reaching the ridge at 850 metres. All the snow was very slushy, and not deep, but we were grateful that all the other walkers had broken the trail. Path to the summit: More care needed on descent for the snowy bit (and the steep section afterwards), mainly in trying to avoid getting hands dirty

A snow flurry accompanied us off the ridge, with plenty of showers getting going on the surrounding hills. On reaching the ugly new track again, we decided to follow it back to the glen, having asked somebody earlier where it ended up. It should certainly shave some time off the walk, and makes it a circuit, but it's a horrible piece of engineering - I've never seen such an ugly track before! There's also a slightly galling section of reascent lower down. A couple of showers on the way down, including one fairly serious one which had us scrabbling for waterproofs. Past the reservoir / hydro scheme this all seems to have been built for, and onto a final, long descent to Glen Fyne. The track forks soon after the reservoir - we took the right fork, but I think the left branch also goes all the way to the valley floor. Some nice evening light in the trees lower down... ...before a seriously ugly last section through a quarry, hydro station and power lines! The whole route reminded me of Beinn Chabhair a bit - some tiresome lower sections, but worth it for the last few miles to the summit. Not a classic, but it's always nice to be out in the hills... You had a good day weatherwise too. Great to get out on a decent day with a little dusting of snow at the summit! I think Glen Fyne is well named - it's lovely even just going right along the glen to the reservoir.
The coos are usually fairly benign too katyhills wrote:I enjoyed Beinn Bhuidhe, and it makes a good walk on shorter winter days if you go to the top of the gully an dback down the hydro road. That open section of bogland between the top of the gully across to the final bit of ascent is covered in spotted orchids a bit later in the year

teaandpies wrote:The ridge part of this walk was excellent it's a shame I didn't get the views like you got

I agree, the ridge is the best part of the walk.

And... oh well, wouldn't be Scotland if it was sunny all the time

Nice to see the views from the top - the clag came in at the top when I was there! An excuse to return

You seem to have managed it with more dignity

Jaxter wrote:Nice to see the views from the top - the clag came in at the top when I was there! An excuse to return

You seem to have managed it with more dignity

At the rate you seem to be compleating, it won't be long until you'll be able to return for your second round of Munros!

Nice report, helping to change my mind about how much of a grind this one had sounded to me, and has hence been ignored thus far!