What do Evelyn Waugh’s Decline and Fall, Ainsley Harriott’s tomato and chilli couscous and the apple tang of a 12 year old Glenfiddich have in common?

Put them together with the incessant rush of a nearby river, the snug warmth of a sleeping bag and the monochrome skyline of snow-speckled crags above, and you get the perfect combination for a wild camp. Add the prospect of a three-Munro day to follow and it makes the sacrifice of leaving all those uneaten Easter eggs behind worthwhile. 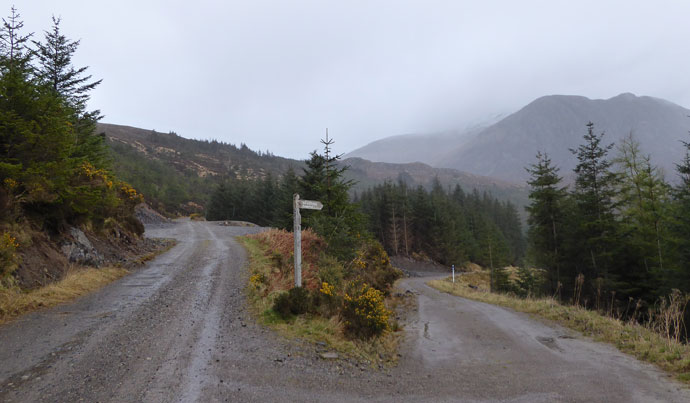 The first might appear a tad surreal but, as I‘d missed the last episode, it had been downloaded onto the iPad for a nocturnal diversion. The second was a result of a recent WH forum string on food pouches and dehydrated grub: it seemed an interesting alternative to a carton of meaty Covent Garden soup. The last was an attempt to tidy up some miniatures left by my late father-in-law: he’d have considered it a fitting epitaph. 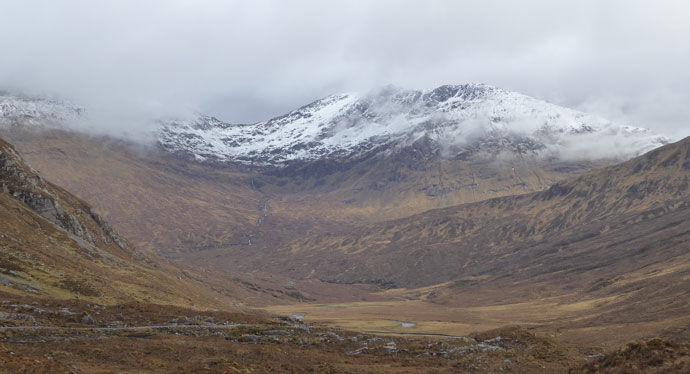 A well-proportioned bedroom for the night below Sgurr Choinnich

The setting was alongside the wire bridge in Pollan Buidhe below Sgurr Choinnich. The plan was to rise early to traverse it and its neighbour Sgurr a Choarachain before heading even further east to tackle the remote Maoile Lunndaidh. As I creep ever-closer to compleating, I’m reluctant to leave any of these outliers that might involve lengthy treks or tortuous approaches. I’m still swithering about Seana Bhraigh, but that’s for another day.

The Waugh had been watched – too much like a televised Tom Sharpe if you ask me.
The couscous digested – apart from the un-rehyrdrated peas
And the Glenfiddich – well, mmmmm

By 7.00am I’d shaken the rime from the tent, been grateful for the quality of Lidl’s muesli and slid my way across the wire bridge – the second one, as I’d already been warned about the somewhat sagging nature of the first. 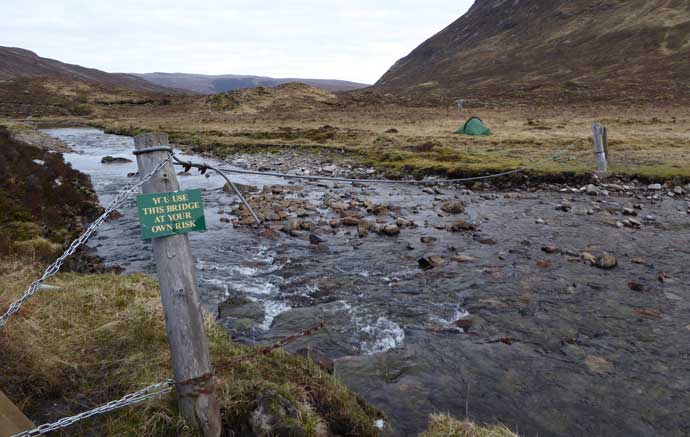 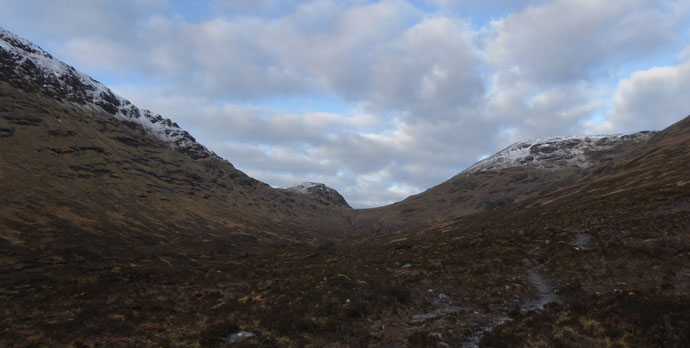 A gentle rise to the Bealach Bhearnais in the early morning

The Bealach Bhearnais beckoned. Strolling up the glen, I realised that the banks of russet autumnal heather and the spikes of fawn, frost-bleached grasses, all hid the signs of a burgeoning spring. Small bunches of green leaves were emerging from the heather stems and pale green spears of grass were sheltering, waiting for the warmth that seems a little late arriving this year.

At the bealach, the ground still gave that slight squeak with each step on the lingering frost and, as the sun came over the horizon, I paused to watch while fragile filigrees disappeared from the edge of pools of water left stranded alongside the path.

South west from the lochan at the Bealach Bhearnais

The views were pretty good too.

Apologies for the occasional descent into attempts at waxing lyricism: the blame lies at the feet of nature writer and broadcaster Jim Crumley. He recently made me realise how little we see and observe of the natural world around us, especially when distracted by a potentially obsessive focus on the paths we tread or the summits to which we aim.

But finger ends were getting numb as I dawdled, so I turned and headed east up the gloriously named Streagan nan Aon Pacan-deug ridge – not a clue how that translates, but I’m sure someone will be able to elaborate. A few blocky scrambles got the circulation going, but when the Torridon giants burst over the northern skyline, the temptation to stop and stare was too great. By now Lurgh Mhor and Bidein a Choire Sheasgaich added to the surroundings – but photography just doesn’t do them justice: unless you’re Colin Prior or Baxter. 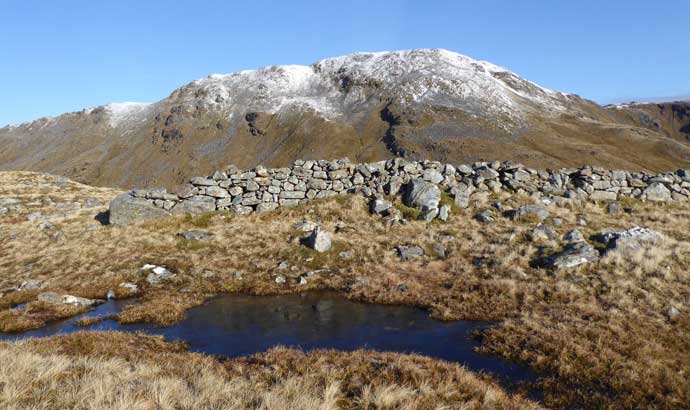 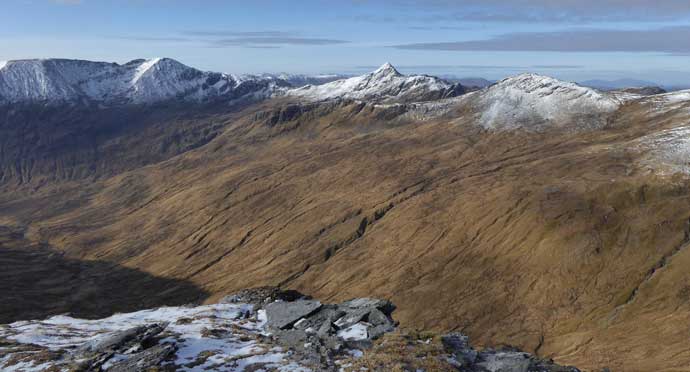 Scrambles and views always take your mind off any sense of tiredness so, as the gradient relented, it was a pleasant surprise to see the summit pyramid of Sgurr Choinnich burst into view just a couple of hundred metres away. Snowy ground, that had previously been patchy, now dominated: encrusted crags and the remnants of cornices reassured me that winter hadn’t quite made its exit. 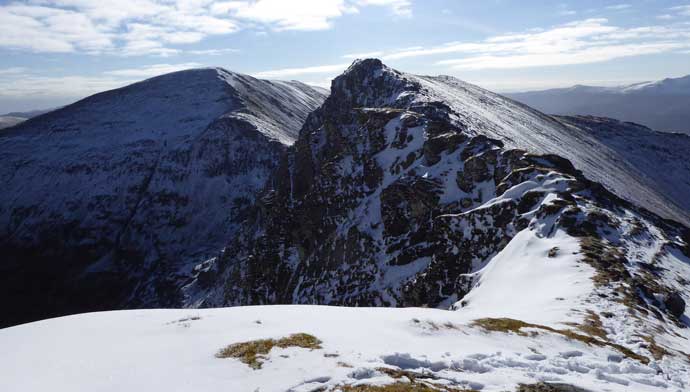 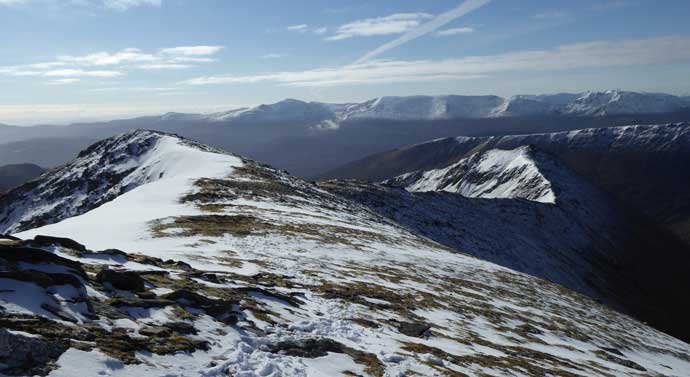 The dip down and back up to Sgurr a Choarachain took barely forty minutes and, just three hours after finishing breakfast in the glen below, I’d added another two Munros to my list. Loch Monar stretched away to the east below the wall of the Mullardoch Munros and the Torridon giants seemed to be sheltering under gradually darkening skies. Meanwhile, the rounded dome of Maoile Lunndaidh hunkered down across the Strath Mhuilich, its white cap promising an extension to this late winter excursion. 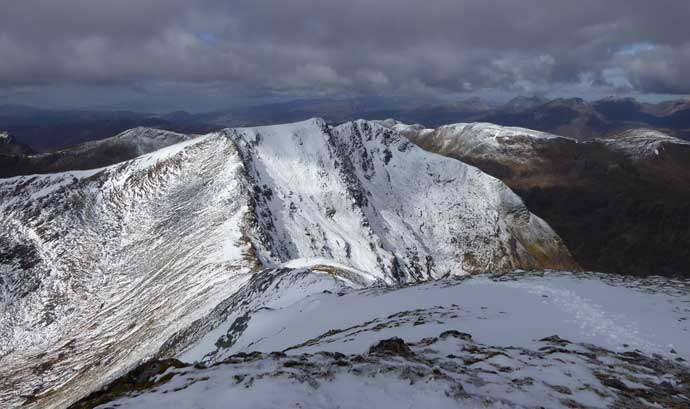 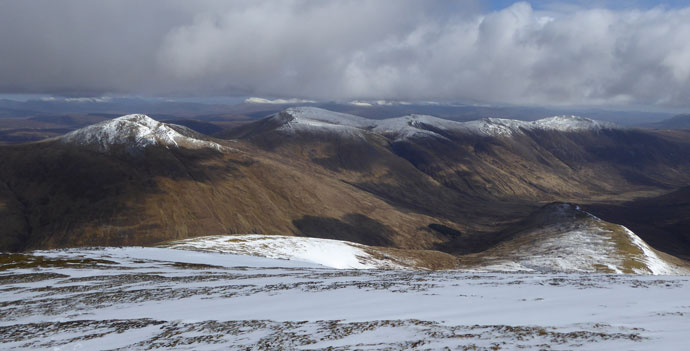 The recommended jaunt out to Bidean an Eoin Deirg was shunned. As alluring as its profile appeared, conditions weren’t conducive to a steep descent down any of its north or easterly faces. Instead, the snow was in ideal condition to make lengthy, plunging strides down the northern spur and on to the Sron na Frianich, from where the squelchy Drochaid Mhuilich could be crossed. 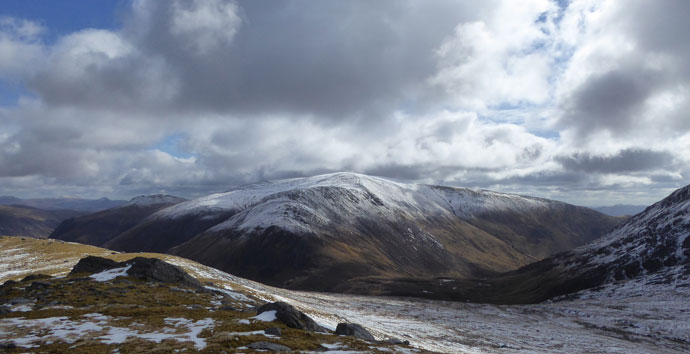 Losing height and leaving pristine white behind is always dispiriting, especially when you suspect that the next phase of the day is likely to be the toughest. A five hundred metre dipper was the price to be paid, but well worth it when Maoile Lunndaidh’s summit plateau began to stretch out ahead. A bitter, biting wind reminded that winter hadn’t quite relinquished its grip as first the jumble of stones marking Carn nam Fiaclan on its western edge was passed. 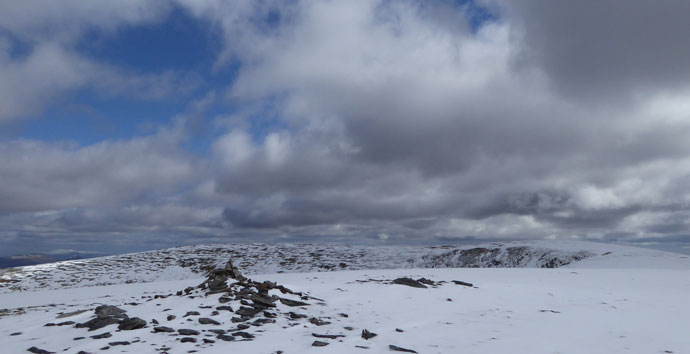 Then the first of the two cairns at a height of 1005m was reached. The southerly one clearly makes no claim or holds no aspiration to be the main summit of the Munro; barely two feet high it could easily be mistaken for the marker indicating the safest route of descent. Its neighbour, some six or seven hundred metres away to the north east, maybe bigger but is equally unimpressive. There is no statuesque form or structure, no selflessly constructed arms of a welcoming shelter, nowhere to perch with a sense of achievement. In fact, the summit of Maoile Lunndaidh more closely resembles a pile of roadside stones hastily thrown together by people eager to leave an exposed and wind-blasted place where they have little or no inclination to linger. It’s a shame. For a hard-fought and remote Munro, you’d like to think it deserved something a tad more significant. 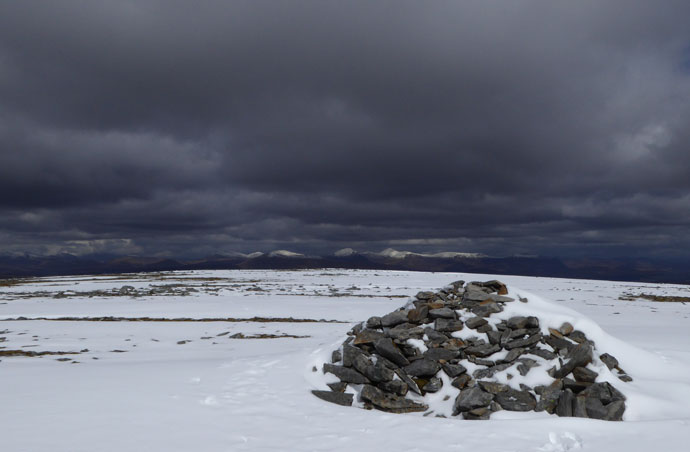 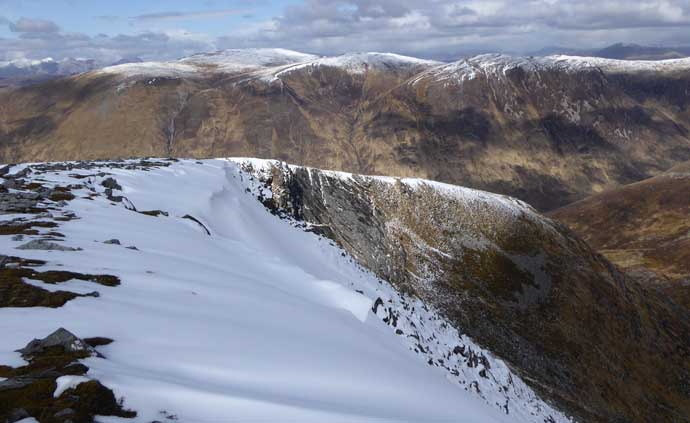 So, now it was time to descend. I too could summon up little or no motivation to hang around. The views were still stunning, but they could be enjoyed while on the move. Rather than head north and down the long slopes to swampy ground, about which the guidebooks warn, I headed back over Carn nam Fiaclan. The spur leading more directly to Glenuaig Lodge, and past the top of the Fuar tholl Mor crags, appeared more attractive and minimised the likelihood of a difficult river crossing as the River Meig grew bigger as it flowed east. 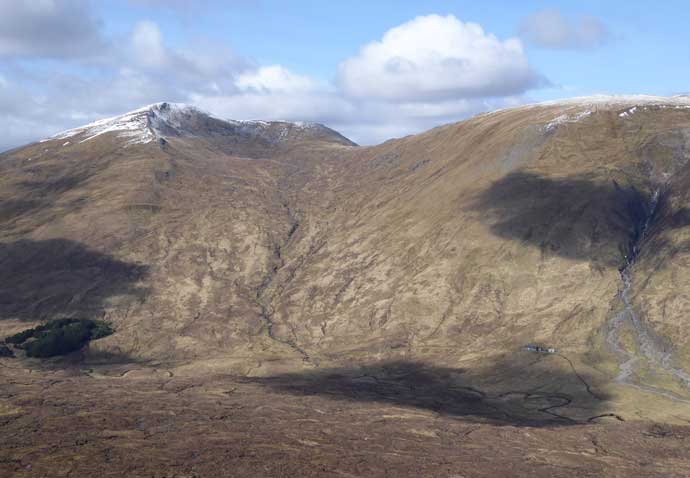 Glenuaig Lodge way, way below - carefully and easily does it

By the time I was greeted by an eager Labrador wary of anyone encroaching on its territory round the lodge, conditions above had changed. While watching the careful placement of each step, I hadn’t noticed the approaching clouds. Now a thick rain and snow squall was dragging itself across Maoile Lunndaidh and it looked like the next four kilometres back to the tent were going to be wet as well as sore. Any hope of being able to pack a dry tent was diminishing.

Fortunately, the localised nature of the squall kept the rain at the eastern end of the glen: the walk back along the track was mercifully dry, and the rise to cross the watershed from one glen to another was barely noticeable. From a distance I could see that my isolated spot by the wire bridge had now become tent city so, having seen nobody since late the previous afternoon, I knew I was headed back to civilisation. However, with the sun out again, I could enjoy a brew and a rest at the tent on my own for an hour or so before starting the final trudge down the track.

With a heavier load shouldered I made slower progress than the two cyclists who hurtled past me at one stage, but at no time did I regret walking in rather than bringing the bike. I’m no experienced mountain biker and there was no way I’d have been happy trying to pump my way up the forestry track out of Glen Carron to start the trip. And pushing it up would have been a price too high to pay for a helter-skelter dash back down. At least I was in less of a rush, and enjoying the latter part of my day, far more than the poor soul who dashed past me at a trot as he tried to make sure he didn’t miss his train at Achnashellach.

Now I think I’d burned off enough calories to attack those Easter eggs with no sense of guilt.

The first photo brought back memories of cycling up there in March (as a wet day alternative rather than a hill approach). It is indeed a bugger of a climb, even without a loaded pack. Doable for regular riders, bound to be pushing for a while if not. Going down was excellent and blinkin' fast!

The bridge looked well dodgy that day, didn't fancy it at all! Nice place to camp, though.

No need to apologise for waxing lyrical.

I still have these to do, so that's helpful, particularly re the camp site. I think I'll take the bike, if only to transfer some of the load onto the bike from my back even if I'm pushing it.

Up to your usual superb standard Nigel

Not sure your plan is best

I did the 3 in 2 trips, the bike made a huge difference, certainly for ML and especially on the way back - still remember rather scarily, freewheeling down the long steady downhill section back to the car. That must have been torture to walk

I was pleasantly surprised with the views from ML, Fuar-tholl Mor is quite spectacular.

Enjoyed that, nice to see them with a bit of snow still around

I'm with you on the long climb up Maoile Lunndaidh

That was brill - thank you

, your photos did justice to your walk and excellent narrative. We have some unfinished business up there and this has really whetted the appetite. As for Seana Bhraigh - it has its own magic