Rod was salivating at the prospect of a three-Corbett day: it would be the icing on his cake at the WH meet.

Options were juggled, vague routes sorted and six takers for the hour's drive round to Glenfinnan bundled into two cars: we prepared to follow in his wake.

How far? How long?

With a selection of maps, reports, and extracts from guidebooks to choose from, there seemed to be no conclusive answer to these questions. At least two GPS units and two smartphones made further contributions to the debate. The closest we got was "between nine and eleven hours." As long as we're back for the quiz, it didn't really matter. Maybe accuracy wasn't going to be a big thing today.

There was enough confusion in deciding what the first target of the day was actually called. Between the above sources we were going to visit Stob a Bealach an Sgriodain, Meall Mor or Druim Tarsuinn. The general consensus was to make sure we got to 770m: anything lower and we'd only visited a top; anything higher and we were on the wrong hill altogether. Don't scoff, it has been known. A pleasant prospect as we start by the Callop River

The car park by the Callop River, just off the A830, doesn't announce its presence and it's all too easy to zip past and end up at the next lay-by on the main road. But, along with Rod and myself, Kevin, BP, Penny and David, we all made it for a reasonably civilised start at 9.15am: not too early to be bleary-eyed and not so late as to be pushing the pace for the remainder of the day: or so we thought.

We caught up, we made new friends, we wandered on our own, and we blethered. Height and distance were gained easily as we headed south past the cottage at Callop, toward the narrowing gorge of the Allt na Cruaiche, then into the wider, wetter and more rugged bowl of the Faith nan Con. The watershed that dropped into the Cona Glen was our first target of the day. Looking back to the north, we sympathised with anyone on the hills beyond the A830 as intermittent squalls drifted across Gulvain and its companions, leaving an icing sugar dusting of snow on the top few hundred feet. Optimistically, we thought south was definitely going to be better today. Little did we know.

By now, the mass of Meall,Mor filled the horizon and we began picking routes up its wrinkled face or considering an east : west traverse of the whole thing. In the end, we opted to pass an enclosed patch of young woodland to the left and head directly up the Allt Eag a Mhadaidh Ruaidh to arrive on the ridge a few hundred metres to the east of the top.

But before that, we had a river to cross and a swamp to negotiate. Suffice to say, not all was successfully achieved and during the remainder of the day Penny was wringing out her socks and pondering the return of her new Scarpas. 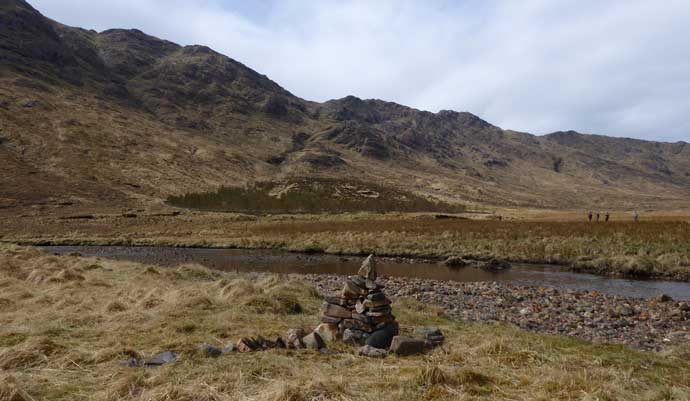 OK, the next bit wasn't the most pleasant of the day. It felt like a very long seventy five minutes as we trudged upward, occasionally following the line of a vague track, but more often than not weaving between small crags and aiming for anything low on the horizon above. 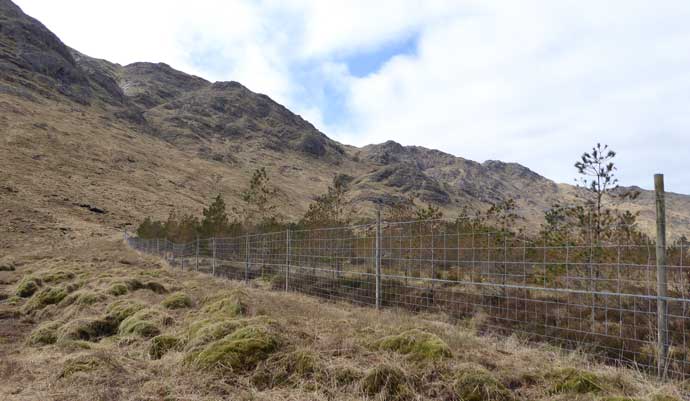 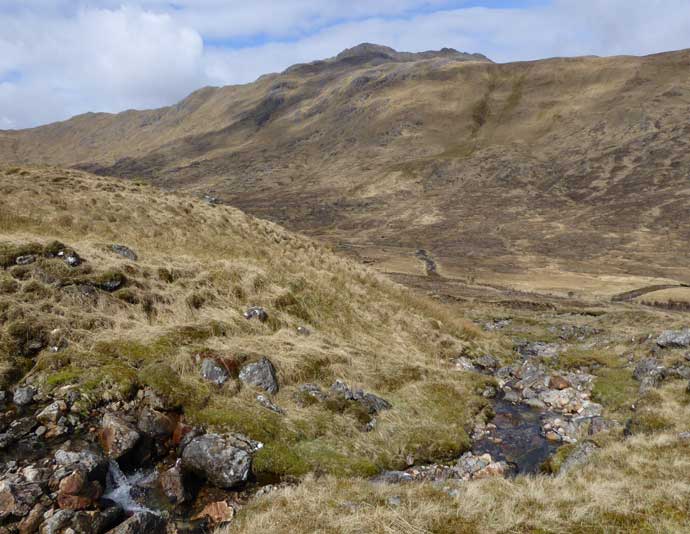 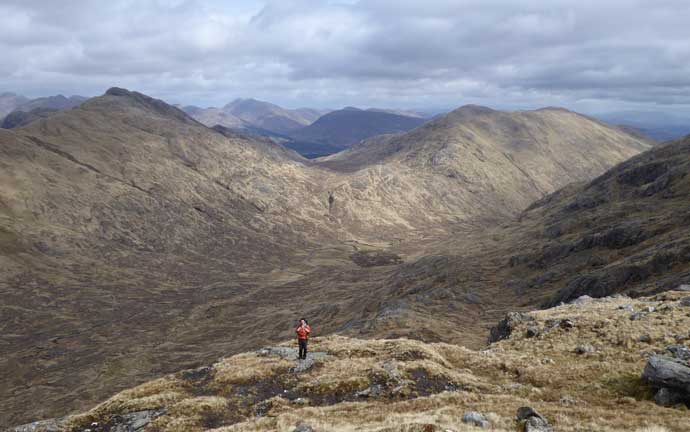 Our smug optimism from earlier was punctured after we finally arrived at the top of the first Corbett of the day - whatever it's called. We were granted a brief glimpse of the distant Ben, stretches of the coast to the south west and someone even pondered if one particular notch on a distant horizon was the The Window on Creag Meagaidh. Having now checked on the WH panoramic view, I have to confess to an unwarranted scepticism. North from the top - grey but expansive

Anyway, once we were settled around the cairn and gobbling peanuts, jelly babies or sandwiches - and Penny had taken her boots off again - the snow hit. Granular pellets rattled for a while before they softened into real flakes: big flakes. For the next ten minutes we were wrapped to the nines and heading into a mini-blizzard. Above, we could see blue sky and across the glen, as gaps in the cloud flew past, Sgurr Ghiubhsachain had the cheek to present a sunny profile. But hey, that's Scotland for you.

Surprisingly, it had taken us over three and half hours to get to the top but, we thought, that's the majority of height gained. Sgurr Ghiubhsachain is only just over there: a quick ridge walk around the head of the glen. Dream on. 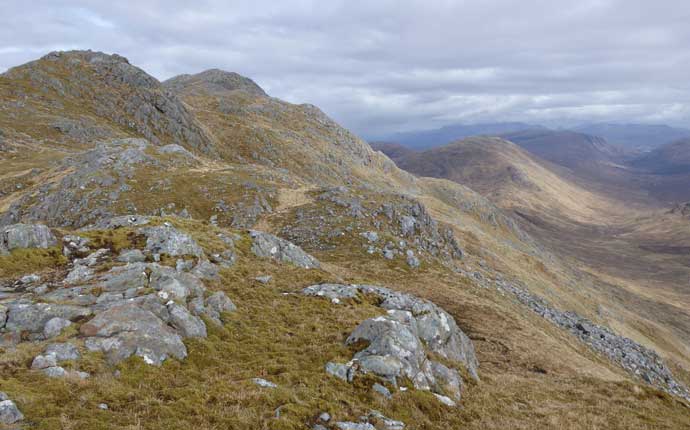 Nearly two and a half hours later and the latest in a succession of false tops smirked at our frustration. I won't attribute the next statement but, if it was meant to encourage and spur us on ...

"It's only another twenty metres."

From the warmth and comfort of my desk at home, and without the wind whipping my map up and down, I reckon it must have been closer to sixty or seventy metres in height and a good five hundred in distance, taking in another two false tops.

With relief, we finally clustered around the summit cairn of Sgurr Ghiubhsachain just before four o'clock. By now, we had been subjected to a few squalls blowing through, but the sky was becoming clearer. The only blot on the skyscape hung over Ben Nevis, where we hoped the group tackling the CMD arete had been successful.

Looking down on the final Corbett of the day, Sgorr Craobh a Chaorainn, we knew this was going to be a little further than twenty metres. However, given the prominent lump a couple of kilometres away, there were going to be no false tops and once there, we'd know we were actually there.

With the steep grassy eastern slopes of Sgurr Ghiubhsachain now adding a bit of slippery spice to the descent, we proceeded with care and breathed a joint sigh of relief when we looked back and found we'd tackled it safely. The remainder of the route simply headed toward the rounded hump at the end of shoulder. Right or left? Short scramble or long scramble? Or a full-frontal assault on the buttress in the middle? 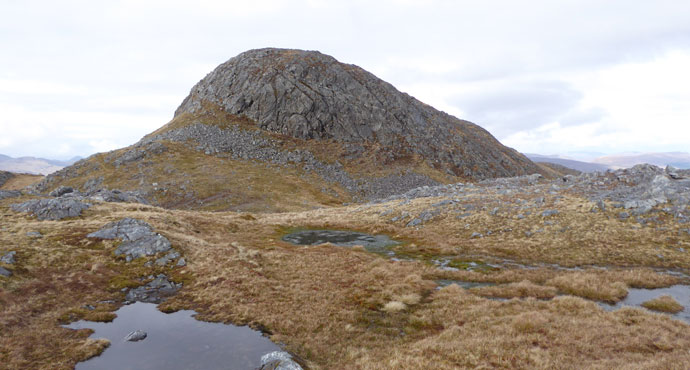 The summit block of Sgorr Craobh a Chaorainn

Between the six of us we did a bit of all three, arriving at the top a mere hour after leaving the previous summit.

It still looked a long way to go from the top of Sgorr Craobh a Chaorainn, and then we needed to add on another hour for the drive back to Kinlochleven. It was proving to be a longer day than we had expected.

Guidebooks recommend a descent over Meall na Cuartaige on the north east ridge from the top. While from above, and on the map, this definitely looked a more aesthetically pleasing end to the day, legs were getting tired. By now it was a case of "aesthetics be damned." We'd already done too much up-and-down round the skyline horseshoe of the Cona Glen and the track below looked tantalisingly close - even if a bit knee-jarringly near.

Directly down we went. On the way out, at the beginning of the day, careful steps were taken, avoiding the boggy stretches on the path. Now, on the return, we took a more cavalier in approach and splashed through puddles, squelched through ankle-deep peat and washed our boots striding through the streams. 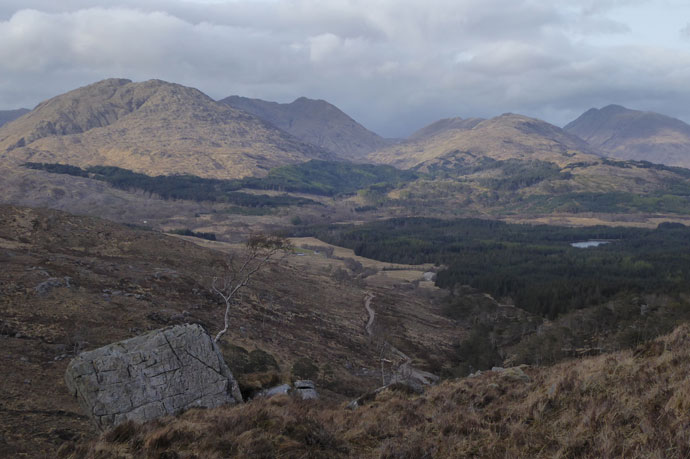 Back down to a brighter Glenfinnan

Once through the deer fences, and back on drier ground, we knew that the end of the day was close to hand. Momentum kept weary legs going and finally, at just seven o'clock, we got back to the cars. At the beginning of the day I doubt any of us would have thought we'd have spent nearly ten hours walking - even if we had been told it was only going to be twenty metres.

We let the Lochaber boy-racers flash past, took the twists and turns of the old A82 to the strains of Amy Macdonald on the CD player and arrived back just in time to grab a combination of burgers and haddock before flexing the brain muscles at the quiz.

And no, the answer wasn't twenty metres ... but Rod was wearing a deeply satisfied grin.

Excellent report there Nigel, enjoyed the read and re lived the day, and yes there still is a smile on my face

Nice one Nigel. As I discovered a few weekends back, this is a tough circuit and some of that walk in (and out) is a real bog fest. The drop from the first Corbett is also a lot more than you expect isn't it? But I'm thinking you all had the same sense of satisfaction as I did on returning back to your cars.

It was a day we will remember! Thanks to everybody in the group for company and apologies if I was annoying, squeaking into people's ears, jumping about and shrinking distances

You beat me to my report, I'm still sifting through our photos... But I guess my story won't add much to what's already been said. Superb hills, climbed in great company, maybe weather could be a bit better but even that wasn't all so bad!
Here's the group photo taken on Sgurr Ghiubsachain: