Right, my first ever report.

I'm new to this walking thing at 54 years old although not exactly a beginner. A few years ago I was on a visit to Glen Doll. It was a nice enough day and I decided Dreish 'looked doable', I didn't follow any paths or the like and just went straight up, no problem, but the idea that you can just come 'straight down' was a learning experience. That and the fact it was a pea souper at the summit made for not the best of experiences.

I swore that one day I'd do Mayar and Dreish, by the proper recommended route, and this was my initiation to proper hill walking.

Me and the boys (my two Vizslas) set off from home and arrived at the Ranger Station around 9. We met a friend there, also a fairly newbie, we got ready and off we went toward Corrie Fee, a walk I've done plenty times before only to marvel at the place, never having actually gone past the top of the approach path. This time though off I went into the corrie itself. 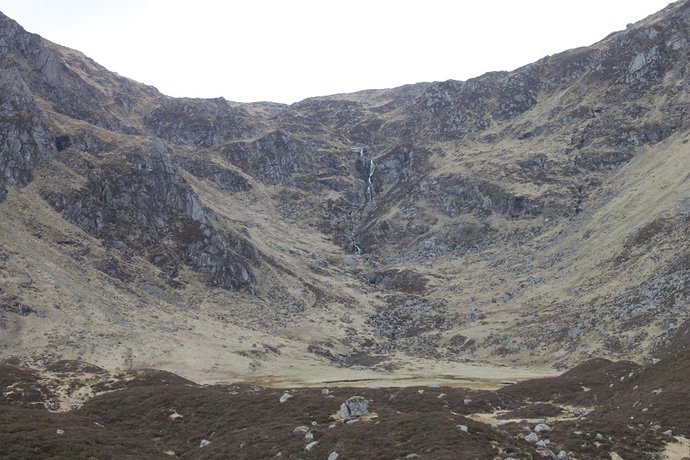 The path is beautifully defined across the corrie and was easily followed. It culminates of course in a rather steep climb up to the left of the waterfall which took its toll on me and my mate but that the dogs thought was great fun Once at the top though the climb lessens as you bend around to the left and start toward the top of Mayar. We thought we were doing great for a couple of old newbies until we looked around and saw a wee girl head toward us, within minutes she hammered past us and left us swirling in her wake. Maybe we need to work on the fitness aspect a bit?

This ascent is good though and for me it was great getting my first real glimpse of some of the cracking scenery in this area, particularly the stunning 'reverse' view of Corrie Fee Bashing on we soon reached the summit of Mayar and my first (second really) Munro. Well worth the effort with stunning views in all directions. The boys got there first and made sure it was safe to approach the cairn Moving swiftly on we descended into the bealach and made for the next target of Dreish. This was a more relaxed walk with less impressive views. With an increase in temperature by a degree or two it was time to sit by a rock and have lunch. Not really being hungry the boys got my sandwiches and I managed a single finger of a Twix before dropping the other only to see it disappear down a dog's throat. That's gratitude.

Suitably refreshed I struggled to my feet and continued onward soon reaching the part where the path leads back down to the glen to the left and leads straight on to Dreish, a surprisingly busy area for such a remote and desolate spot The climb to Dreish summit was a bit of a pull but we soon reached it and were again rewarded with some fine scenery, rather different from my previous visit there when I could barely make out the shelter from two feet away 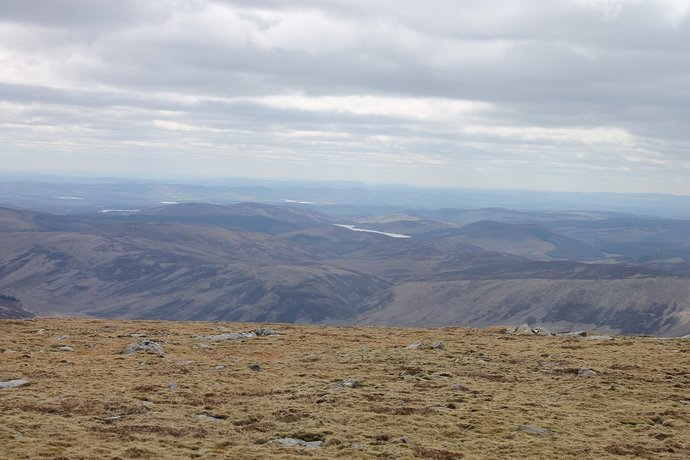 The descent saw us re-trace our steps back to where a path led back down to the glen. If getting up there was a bit of a stretch of my fitness getting down was to prove a real challenge for this old codger's knees. Still, once again a valuable lesson was learned and knee supports have been procured in good time for the next challenge which will see me and the boys tackle Ben Lawers and Beinn Ghlas.

One walk in and I'm hooked so despite my pretty boring report I'm afraid you'll be subjected to more over the coming summer; for this I make no apology.

Re: First Munros - but not the last

Well done - great report and pix, and glad you enjoyed your day

That corrie's (Fee) a real treat isn't it? Know what you mean about the knees - hope the supports help you. I can't get down any hill without mine.
You can drop off Driesh by the Scorrie, which runs along the edge of the Winter Corrie, and is shorter than going back to the shank, but much steeper.

Good luck with your next outing too