Blown away in Coigach

Blown away in Coigach


MWIS were forecasting 35-45mph winds for my walk and when i got out the car at Culnacraig the wind immediately blew over my boots and blew my Garmin down the road. Started having doubts about the walk but i had read that there were bypass paths on the ridge so i thought i could use them as a last resort if the ridge was too windy.
This is the first view of ben more coigach after ascending out of Ullapool. Typical view of the Fiddler in the middle as seen from the main road and is the view that made me want to climb this peak. I followed the WH route for this walk and crossing the stream where it came out of the ravine was easy.
View of the ravine. I was surprised how eroded the path was as it followed the high edge of the ravine and i left it to cut directly across to the Garbh Coireachan which did indeed look a bit intimidating. 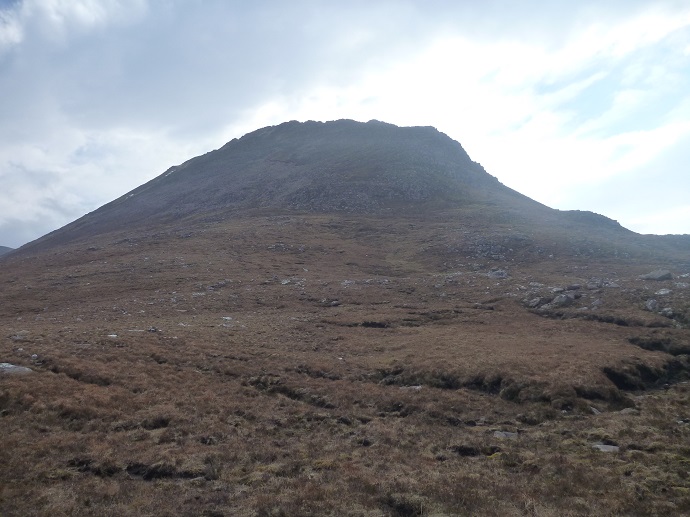 I was now sheltered from the wind and this made for an enjoayble ascent to the ridge. A path can be followed or easy scrambling on the overlapping pancakes of sandstone. Pleasant surprise when i gained the top of the ridge to find the wind much less than at the carpark and easy to keep to the ridge albeit at a crouch at times. the start of the ridge looking back at a downclimb 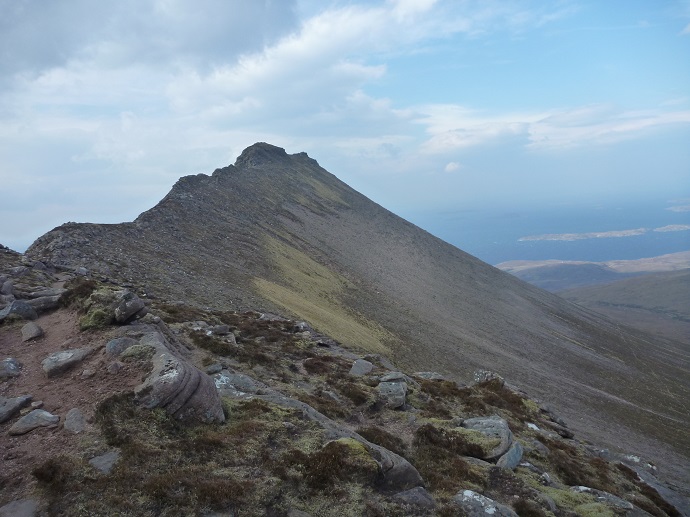 looking back along the ridge

Away from the sharp ridge and heading across to the flattish summit of Ben More Coigach was easily the windiest part of the walk. The views were not great due to haze and spells of cloud close to the surrounding summits. An Teallach was barely visible.
The col between here and Sgurr an Fhidhleir looks rather odd and what i though were boggy ,wet sections turned out only to be patches of sand. The whole area has lots of eroded soft sand sections on the descent. Sgurr an Fhidhleir on the left

Sgurr an Fhidhleir has great drops to the north and east and this was made much more dramatic by the wind which made standing close to the edge a bit nerve wracking. taken with my legs as far apart as possible Stac Pollaidh finally getting some sun

After a few hundred metres of descent a well defined path develops and an easy drop back to the starting point, only to find the wind had dropped a lot and the car doors would now stay open by themselves! view of some of the Summer Isles The Fiddler in the sun on return road [left of centre]

One of my favourite walks, the views are stunning out to the Summer Isles and also the view from the Edge of the Wedge

audreywaugh wrote:One of my favourite walks, the views are stunning out to the Summer Isles and also the view from the Edge of the Wedge

Mine too, though I'd recommend descending down from Garbh Choireachan at the end of summer's day, with the Summer Isles laid out in from of you on the sparkling sea.