Break from the bike: Little Buachaille at the spring meet

Break from the bike: Little Buachaille at the spring meet

. I had got through more whisky than strictly necessary the night before, and was paying for it slightly this morning! Chatting about plans, I had decided to head for Buachaille Etive Beag with David. Having Cerebral Palsy, David has to put more effort than most of us on this forum into getting out on the hills. It certainly doesn't seem to stop him though, and he had managed a fair bit in the past. Having been off the hills for a bit, he was keen to find out what he was currently capable of, and was looking at today as a bit of an experiment.

Rather than me rambling on as much as usual about the walk, here's a link to David's blog from the day, which gives a much more interesting perspective than I could:
http://davidcreilly.com/mountainchallenges/

We drove round to the top of Glencoe in David's car and set off mid morning. He had warned me that he would be on the slow side but I didn't think we made bad time up to the col at all. I'm slightly disappointed in the photos, which are a bit greyer than the day actually felt. It was one of those atmospheric days that doesn't really translate well onto camera. 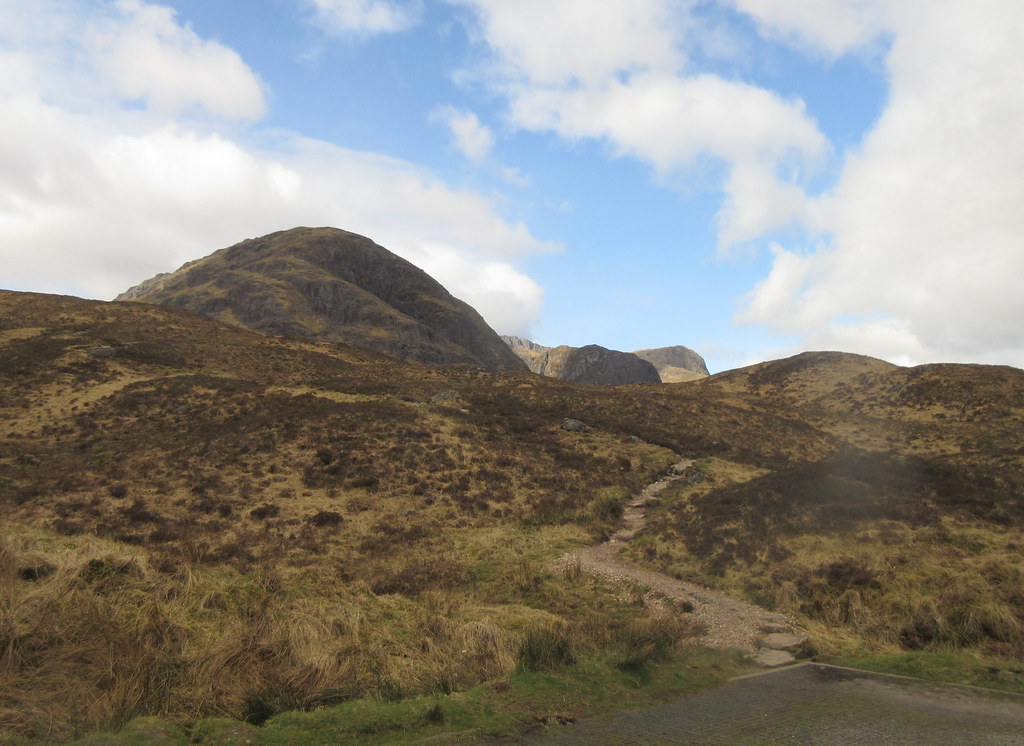 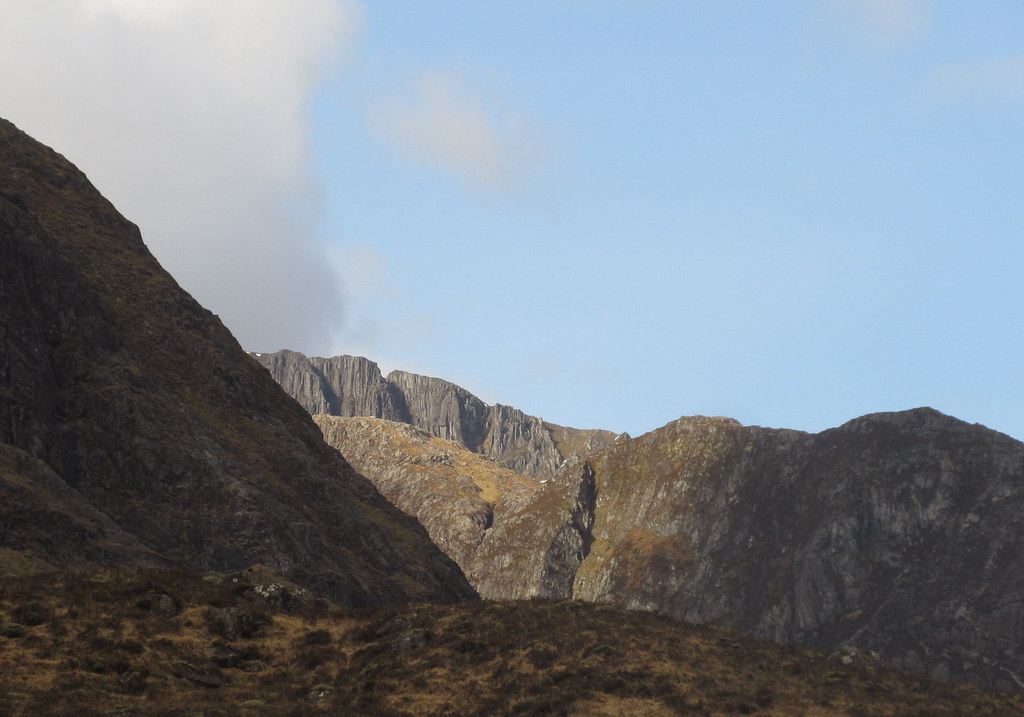 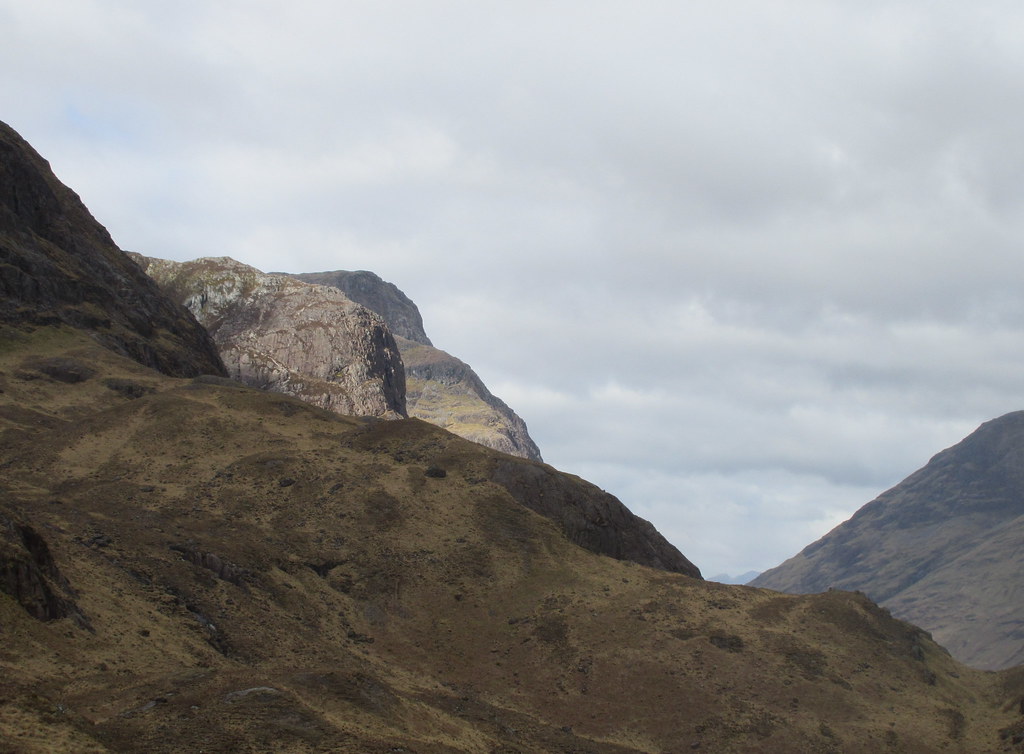 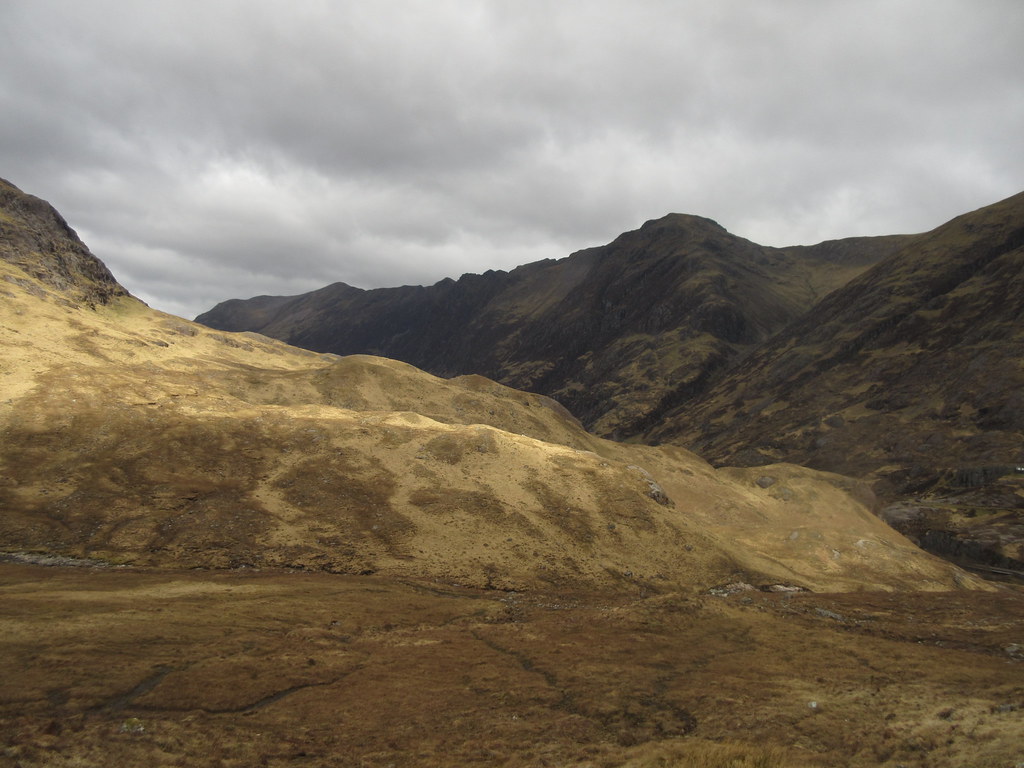 …with cloud moving in: 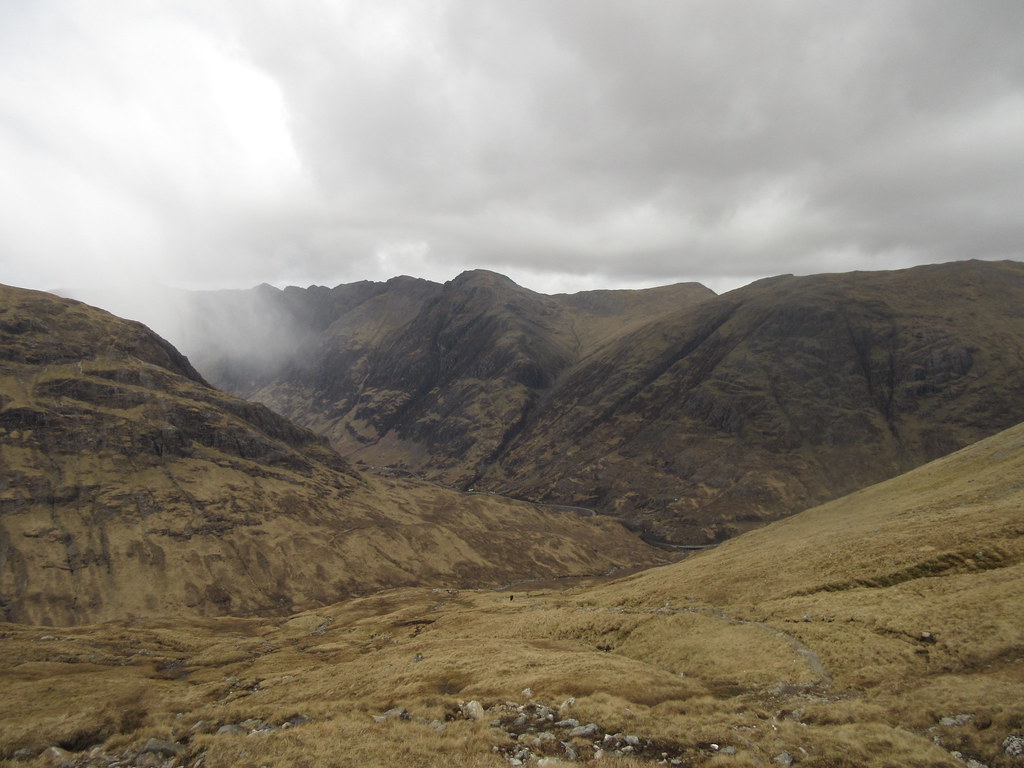 At the col, we decided to head for Stob Coire Raineach, as David decided that it was his best bet for getting to a summit. I thought he was going fairly strongly at this point, but he decided that he had gone far enough. After a bit of a discussion, he decided to drop back down a short way for a break, while I headed quickly up to Stob Dubh on my own. 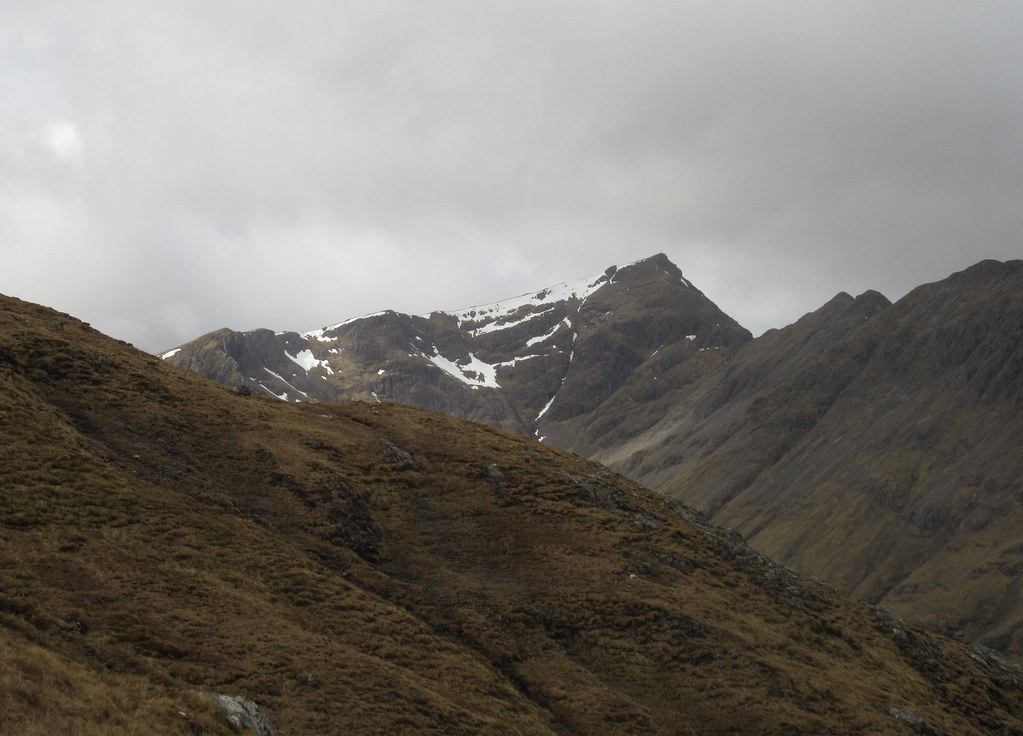 Nice summit - it's quite a time since I was last up here, and the path has improved substantially since then - it's now a sort of boulder motorway. There were quite a few people about enjoying the views, and I wandered along to the SW end of the ridge to look down Glen Etive. Unfortunately this was the direction of the most cloud, and there was only a sliver of Loch Etive and none of Beinn Trilleachan or Cruachan on display. I could just about spot Mull though, so I wasn't complaining.

On the summit ridge, looking over to Buachaille Etive Mor: 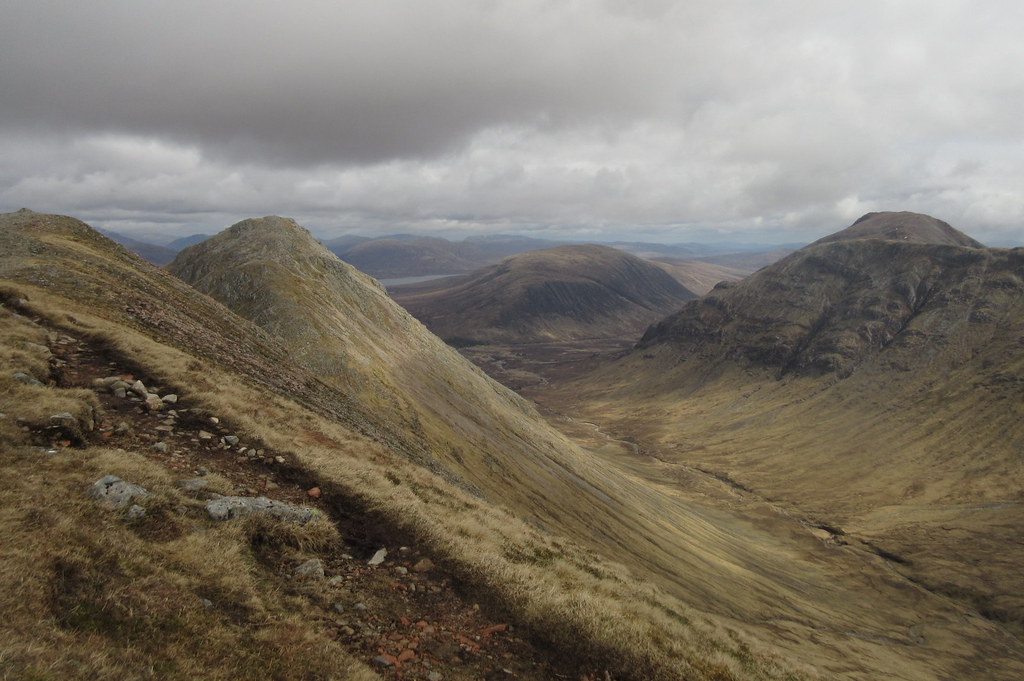 Stob Dubh (the other one in the area) with Ben Starav to the right: 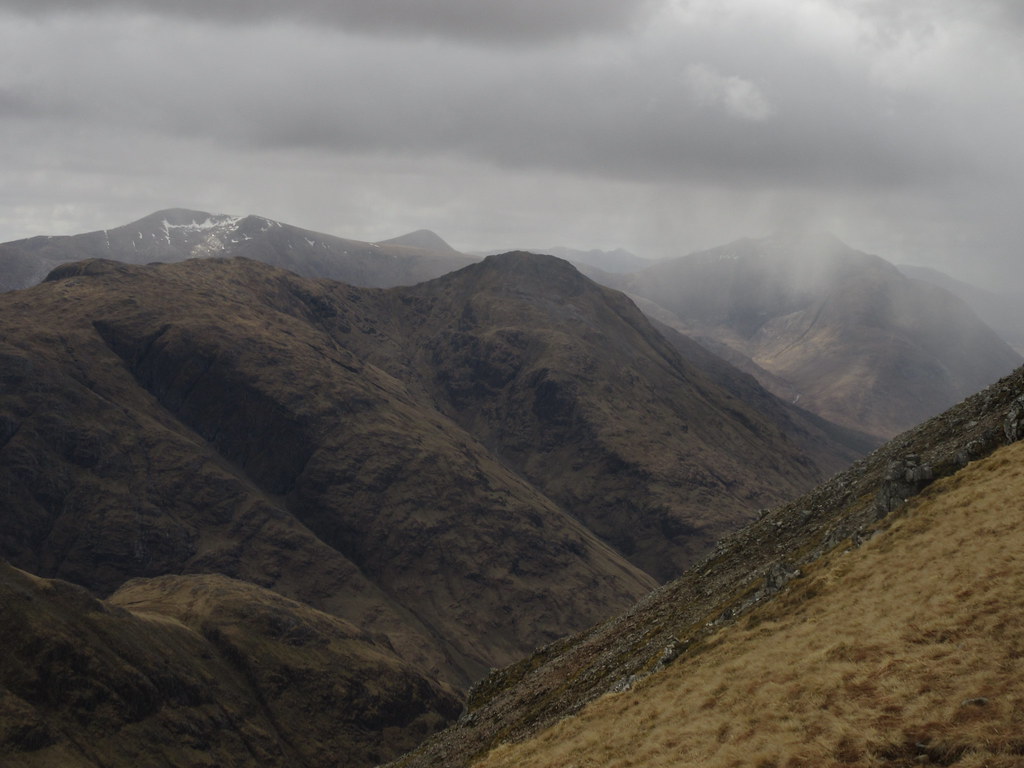 On the summit ridge: 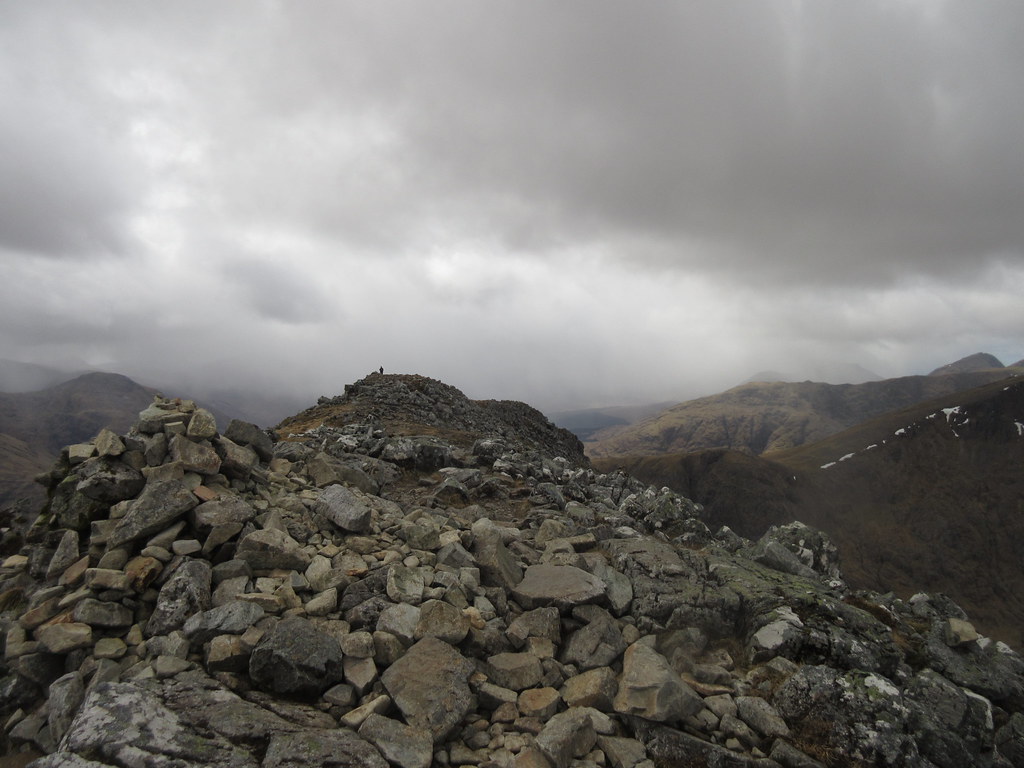 Looking over to Bidean: 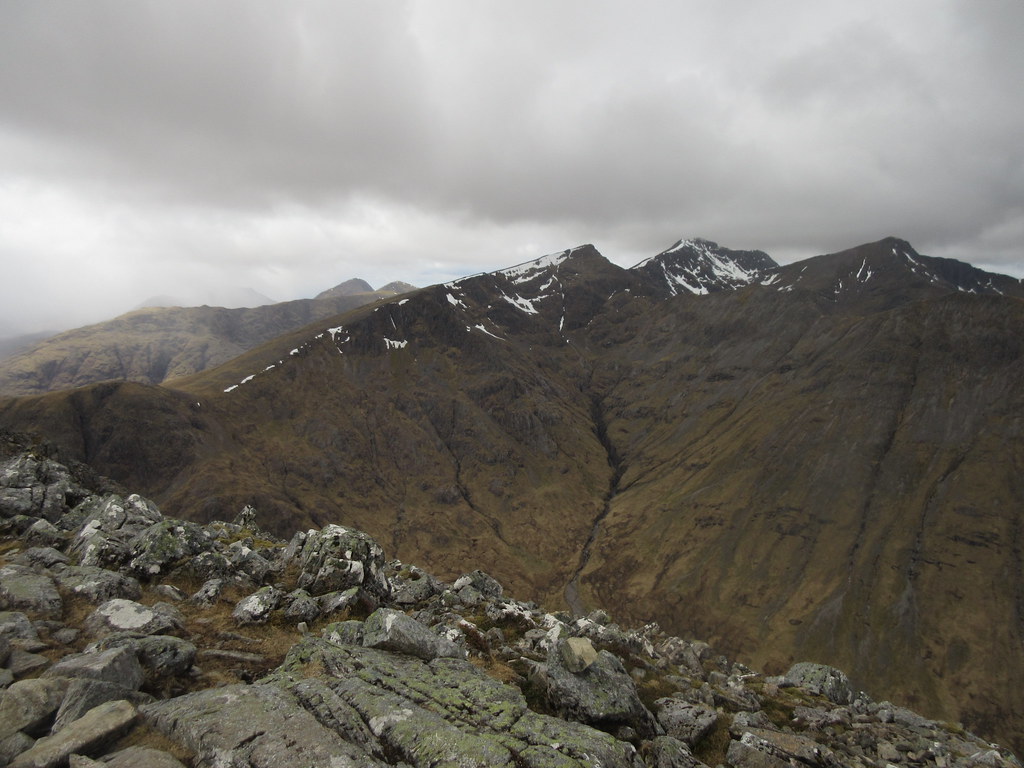 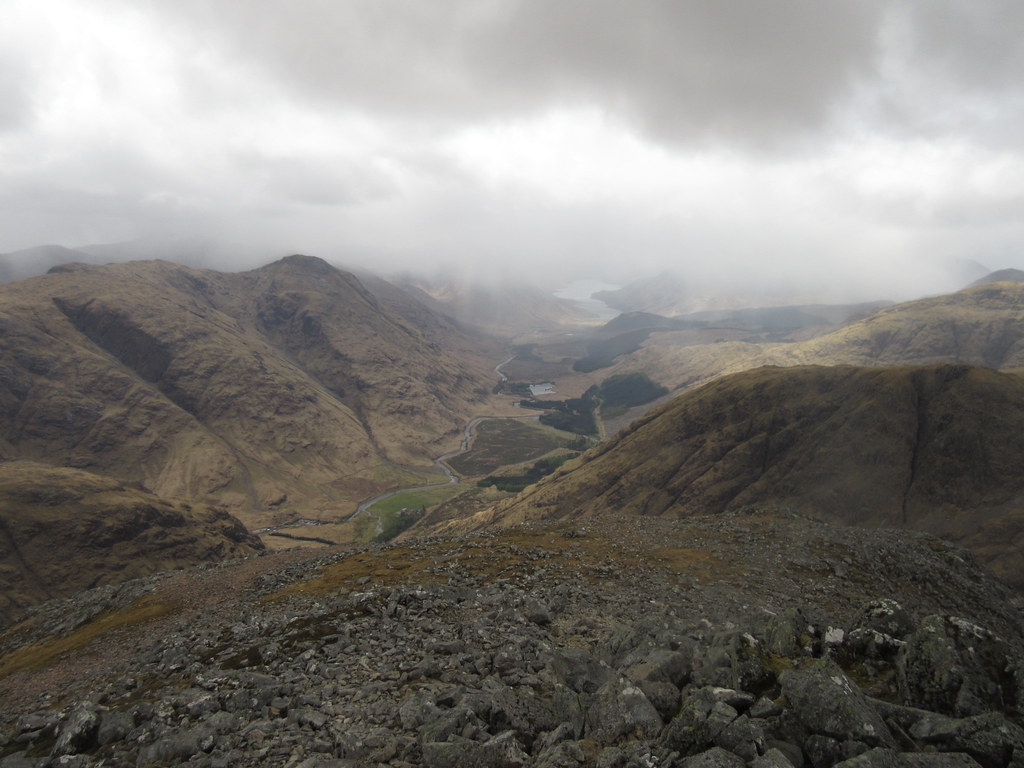 Sgurr na h-Ulaidh with Ben More on Mull behind: 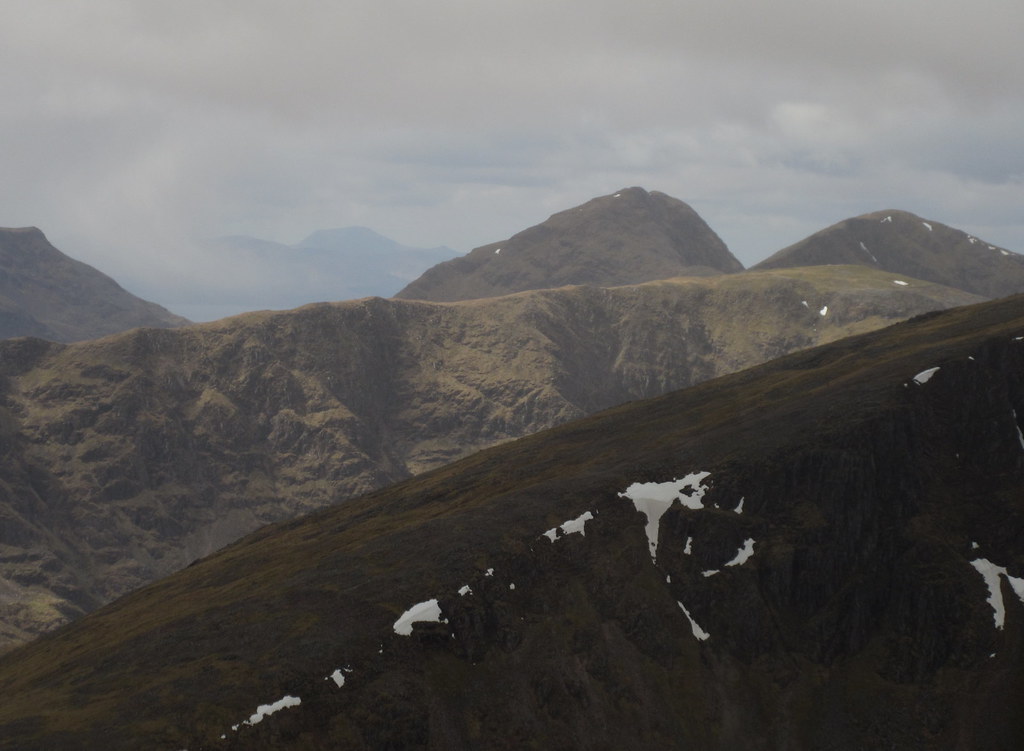 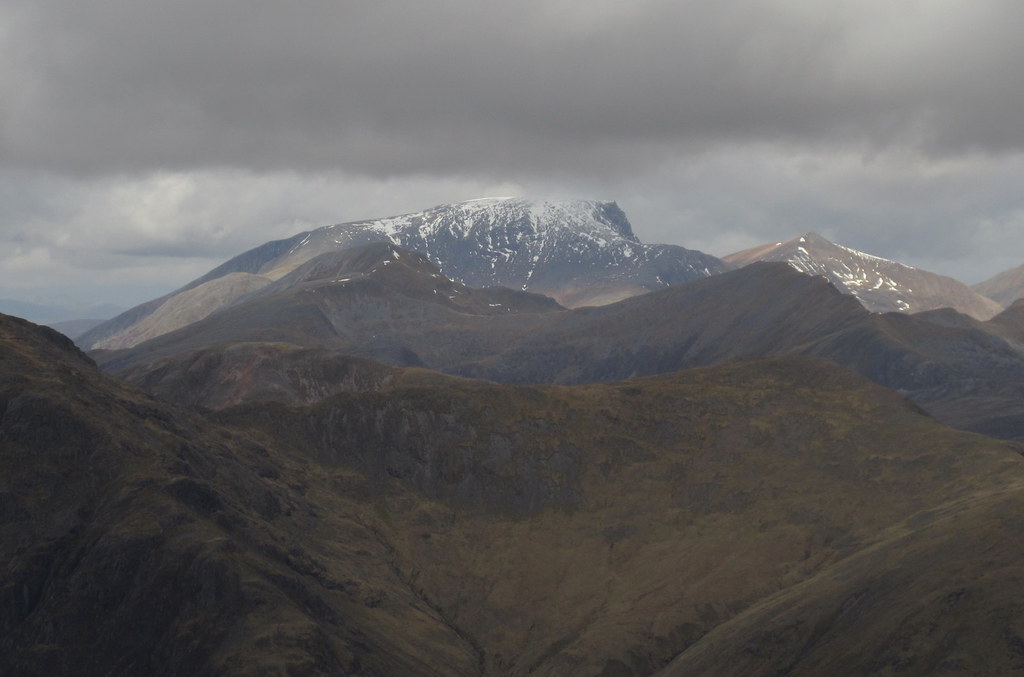 Looking back along the summit ridge: 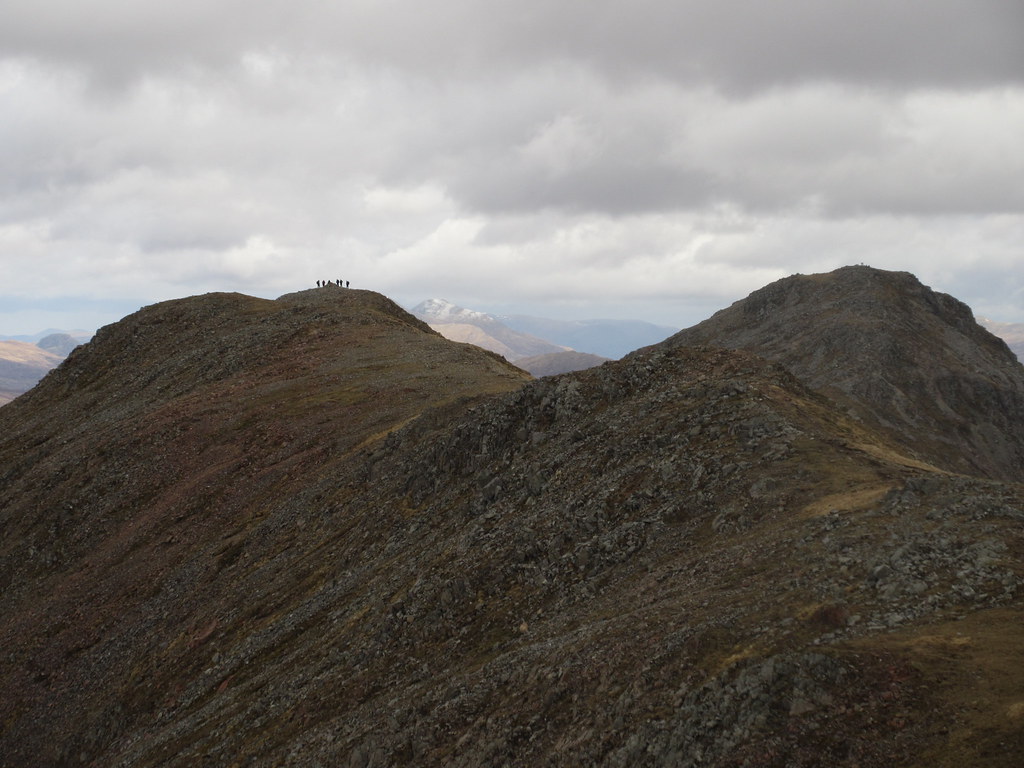 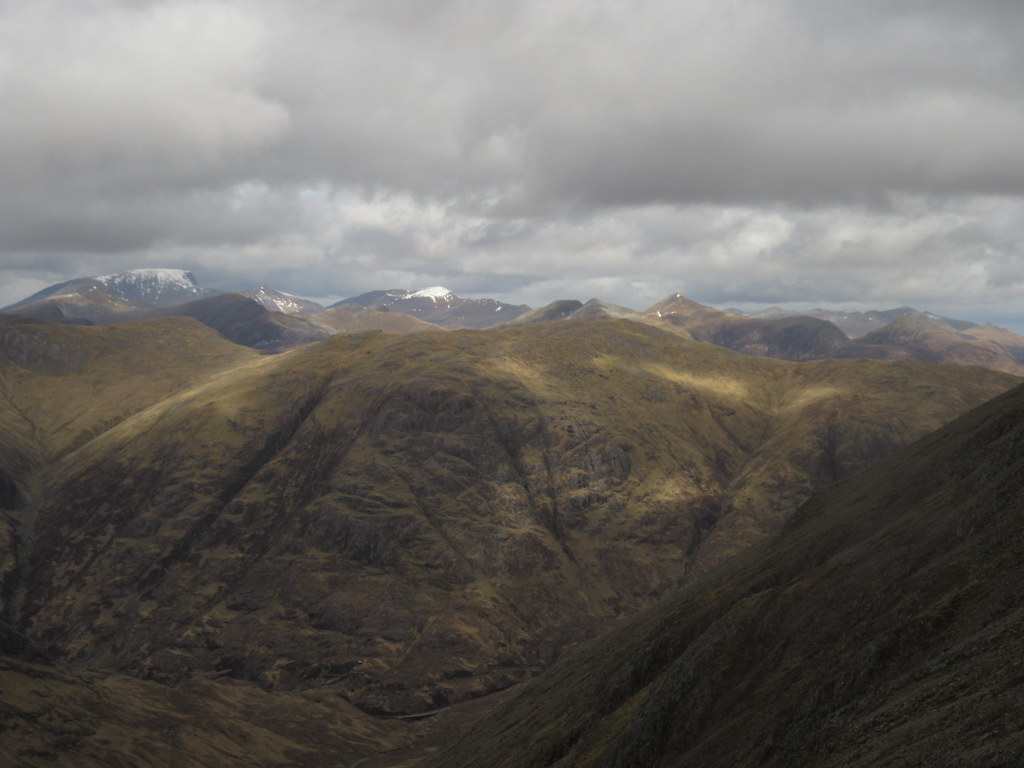 I descended back to the col and carried on down to catch David up. I could see that the descent was going to be more awkward than getting up there. He'd decided to get the worst of it over early on rather than sitting about too long, and he had clearly judged it right when he decided to turn round. Although we were most of the way down now, he was struggling against painful joints for the last section, and it didn't look fun at all.

A Chailleach and the path down: 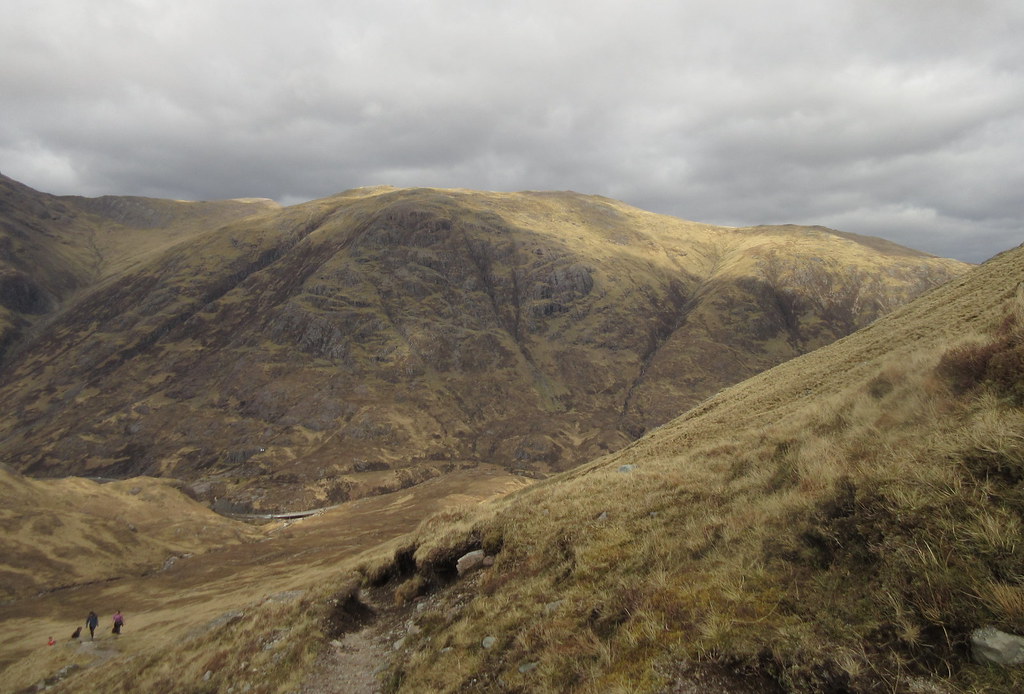 Still, we got back down, and David was pleased with most aspects of the day, but definitely not the pain in the latter part! Despite the seemingly drawn-out return to the car, we weren't back late at all; it probably wasn't later than 3pm when we rolled back into Kinlochleven.

Back at the hostel, it was great to bump into Monty for the first time in a good few years, and we sloped off to the pub for a couple of pints while other folk slowly trickled in from the hills. Saturday night was the usual hoot, with a good quiz (despite a couple of suspect questions - pretty sure we should have won

), and a deliberate avoidance of any more than the bare minimum of whisky. Seems like I am slowly learning

. A big thanks to Jackie for organizing a great meet, David for putting up with me on the hill, and a special cheers to David Main for the excellent pies

So quite a different day out from the usual Saturday walk on a meet, but definitely an inspiring one, showing what is possible if you want to do it enough. It made me wonder - would I still do this if I had to put myself through so much pain and effort? Not sure, but I can only hope that I would.