The most popular circular route in Glen Lyon covers 4 Munros. Out of curiosity, I checked the number of reports posted on WH on this walk... 88! But very few people realize that just a few kilometers up the glen there is another good circuit, the one I called "The Innerwick round". Similar distance and ascent to the Munro walk, this one links two Corbetts and a Graham.
Most folks bag the two Corbetts as short, separate trips, as they are easy hills for winter conditions (tracks a long way up) but for us Glen Lyon is a 2.5hrs each way drive, so we always planned this as a three-in-one. I must say, this round is, in my opinion, far more demanding than the Munros. The ground between the hills is wet, bumpy, overgrown with heather and quite steep in places. Not to mention the lack of paths. Still, a very satisfactory outing for lesser hills baggers, with good views and almost guaranteed solitude - next to no one goes for this round!
Funny that out of all sources, only one guide book mentions combining Cam Chreag with Meall a'Mhuic, but even that one says, connection with Beinn Dearg is not so good. All right, it's overgrown, it's pathless and lots of re-ascent between the hills, but I think if we did it with big smiles on our faces, any hill bagger can! The only problem would be stalking in September/October, this area should be avoided in autumn.
We went up clockwise, to Cam Chreag first, then over an intermediate top to Meall a'Mhuic, leaving Beinn Dearg as the final mountain.

Track_GLEN LYON 18-04-17.gpx Open full screen  NB: Walkhighlands is not responsible for the accuracy of gpx files in users posts
It was Tuesday morning and when we arrived in Innerwick, the car park was deserted. It's a very nice place though, even has toilets!
Black Arrow alone in the car park: 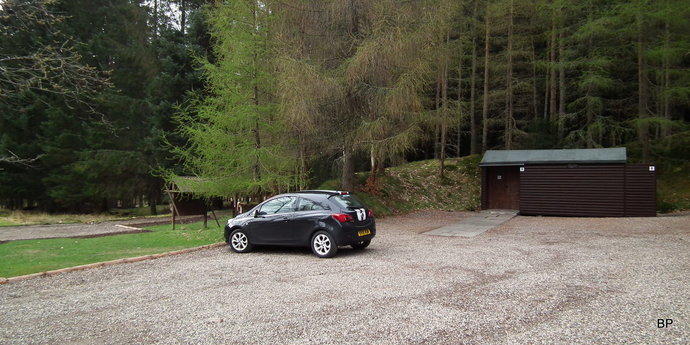 Out of the car park through a metal gate, we marched up an estate track along the edge of the forest: 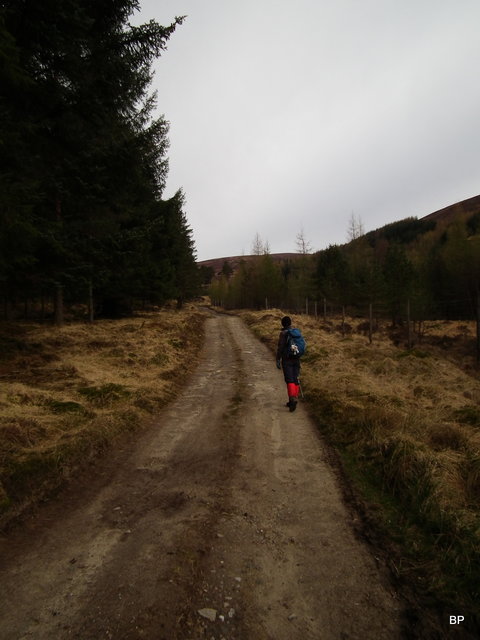 Going up Cam Chreag first allowed us to use this track to its very end at over 600m: 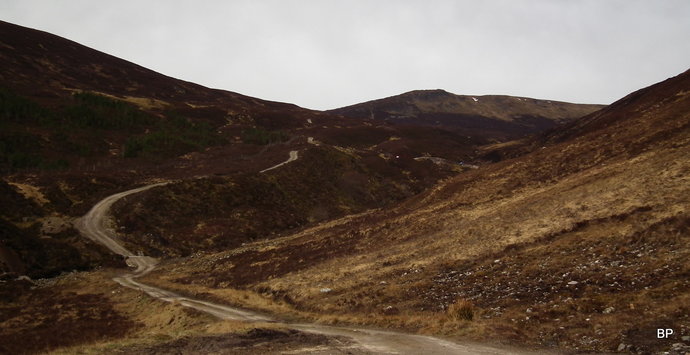 As we gained height, we could see the whole length of the ridge of our target Corbett, looked interesting already!

View to the south opened up, as well, the Lawers group dominated the horizon:

We followed the track to its end on the col between Cam Chreag and the lower top, Meall nam Maigheach. The final 200m up to the summit looked steep but grassy: 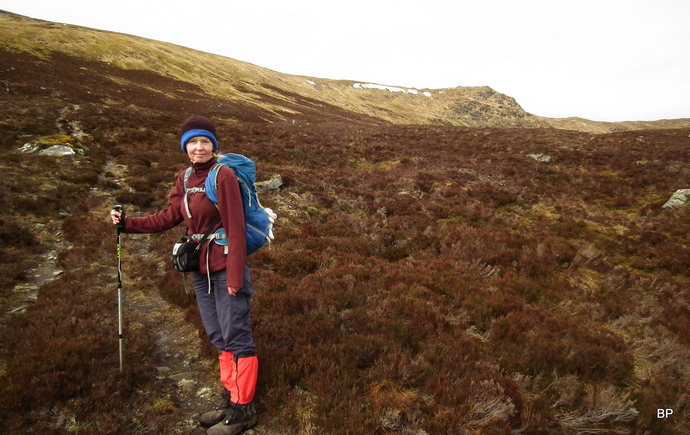 At 547487 a small cairn marks the start of a path through the heather. This path climbs straight up the slopes to the summit ridge and from near the top, views become really good.
What still awaited us - Meall a'Mhuic and Beinn Dearg, with Carn Gorm behind:

A short break to adjust gear... Summit was visible just 500m along the ridge: 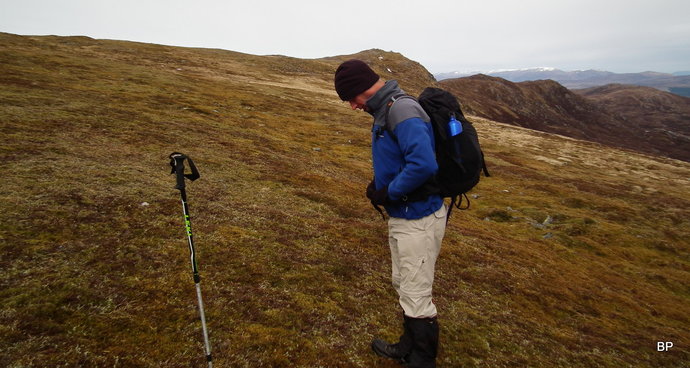 The day was a bit grey, lots of high cloud made photos look dull, but this hill is I think the best viewpoint of the whole trio, well worth taking a longer break here. I was ready to lurk about, as always...

Loch an Daimh and the Glen Orchy Munros behind:

Due to the high cloud, the sky had a pinkish tint to it, making interesting conditions for taking photos. The Lawers group looked spectacular...

...and so did the Tarmachan ridge!

Two steep peaks on the southern horizon, must be Ben More and Stob Binnein? 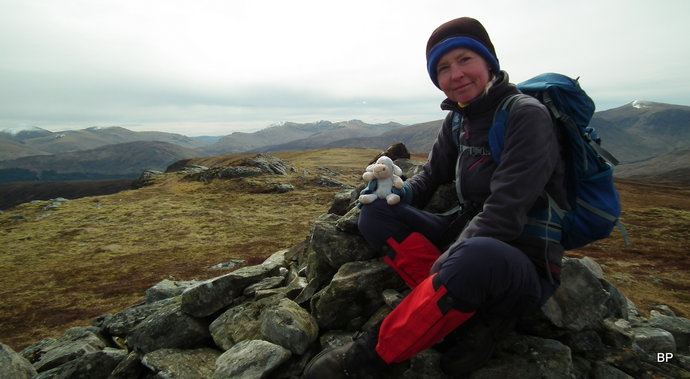 Meal Ghaordaidh to the south-west:

It was windy by the cairn, so we found a large rock and hid behind it, it was time to refuel, warm up with tea, before embarking onto the pathless part of the trip, the traverse to Meall a'Mhuic (and Beinn Dearg eventually).
We retraced our steps to the track on the col. The path leading to Meall nam Maigheach, marked on 1-25k map, does not exist. Instead, for over 1 km we plodded through countless water canals, small peat hags and muddy puddles. The ground became drier near the top of Meall nam Maigheach. This subsidiary top can be omitted by contouring around to the 621m col, but we found the higher ground much easier to walk 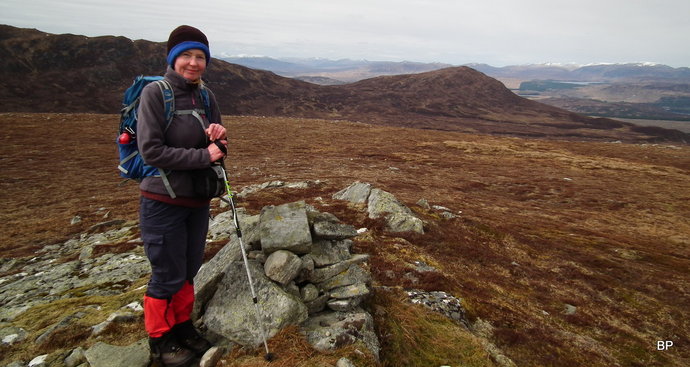 From the subsidiary top, we dropped to the aforementioned col and then descended at an angle into the dip of Lairig a'Mhuic. This was the least pleasant part of the traverse, overgrown with heather and quite mushy underfoot. An option would be to aim for the shielings at the bottom of the glen, but this would involve more descent/reascent.
Trudging through the deep heather, our second target hill looming above:

The bottom of the dip was protected from the wind so we stopped here for 5 minutes, then carried on up the steep slopes of Meall a'Mhuic. I let Kevin take the lead and after initial clambering over scratchy heather, he found an animal path winding its way through the vegetation. We pushed on, glancing at the western sky behind us, where we spotted the first signs of wet front coming. Higher up, the angle eased of and we marched past two lochans straight to the top of the Graham.
Kevin on the summit of Meall a'Mhuic: 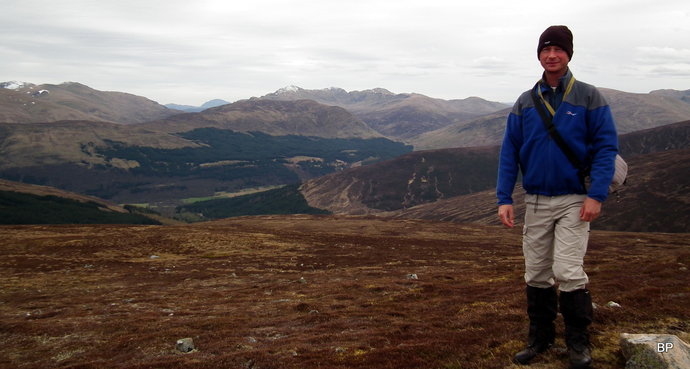 The NW panorama, showers developing over Glen Coe to the left:

From the summit of Meall a'Mhuic, one can descend straight to Innerwick by picking an estate track on the southern slopes of the hill. We kept that as an option in case weather broke, but as we stood on the top of the Graham, apart from very distant showers over Glen Coe area, conditions looked good if a bit windy. We had more than enough daylight left to include Beinn Dearg and enough energy left in our legs to climb another 400m

We descended easy, grassy slopes to the glen between the two hills. We spied a wet ATV track ascending the western side of the Corbett - this would be out route up.
On the col:

The ATV track soon shrunk to a path but it was possible to follow almost to the lower top, Meal Glass, where it vanished in the thick heather.
Meall a'Mhuic from somewhere up Beinn Dearg:

View north to Loch Rannoch and hills beyond:

After more plodding through scratchy vegetation, we hauled ourselves up to the last summit of the day. Beinn Dearg, my 118th Corbett: 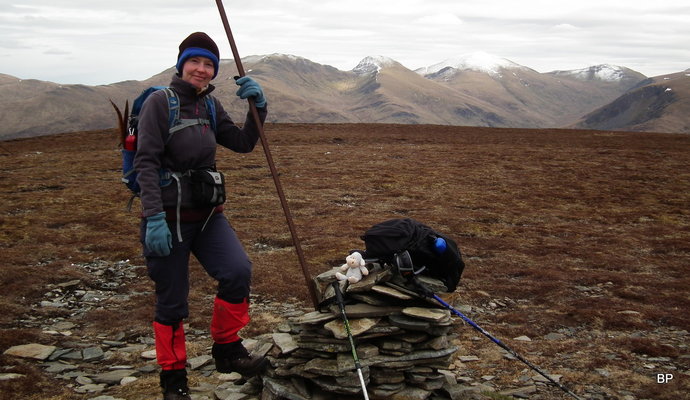 I was surprised how close we were to Carn Gorm, the westernmost Munro of Glen Lyon circuit:

The best views from this hill are to the south, to the hills across Glen Lyon, including Tarmachan Ridge:

Looking SW to the upper end of the glen and surrounding mountains: 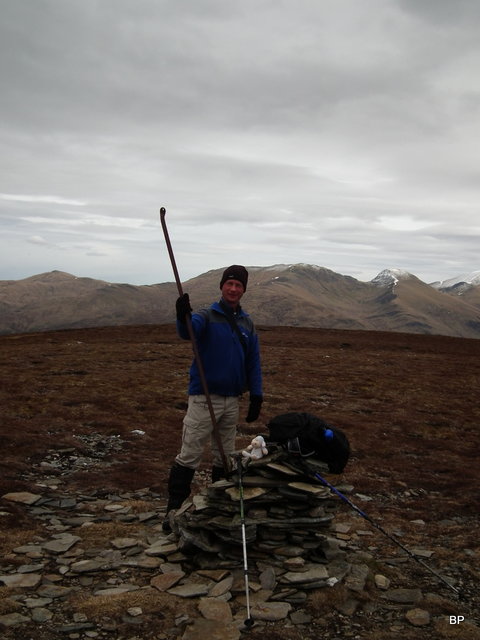 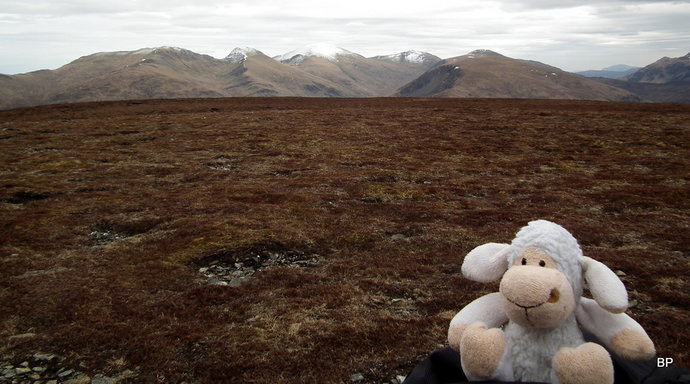 We had plenty of time left before dark, so we stayed on this top a bit longer, taking advantage of good conditions - weather held, what a surprise!
A few zooms to more distant hills:

For the descent to Innerwick, it's possible to drop steeply straight to the track in Lairgh Ghallabhaich over Meall Glass, but we opted for what seemed more gentle option, aiming for the 703m col and the descending to the edge of the forest, where we could pick a forestry track.
On the way down:

Once on the track in the woods, the rest of descent was a formality. We marched back to the car park, happy and not even too tired. It was a very successful day of Graham/Corbett bagging, with good views around and in total solitude - for the whole day, we didn't spot a soul! Indeed, the only living creatures we noticed were deer, sheep and countless pheasants

Only when we got home, we discovered that we ascended close to 1400m

It sounds shocking, but I guess it's the nature of Corbetts and Grahams (the 500ft drop!). So the Innerwick circuit is about 5km longer and involves about 100m more ascent that the neighbouring 4 Munros. It's also tougher going on boggy, pathless ground, but in the end, it's a very satisfying day out. For those living further away from Glen Lyon, a great way to cover 3 peaks in one day!
.....................................
My next TR will be for Corbett connoisseurs, and will involve one hill with restricted access and Panther's instruction how to avoid the restrictions

An opportune report for me BP. Was along the road from here yesterday picking off the 3 Corbetts at the west end of Glen Lyon. Had a great day and got me thinking about a route that would take in these 3. Thanks for posting.

Did these 3 just over a year ago and your report brought back good memories.