Nobody Ever Mentions The Weather Can Make or Break Your Day

Nobody Ever Mentions The Weather Can Make or Break Your Day


Nobody Ever Mentions The Weather Can Make or Break Your Day

It's good to be back.

Ah-ha the irony - I think I have mentioned the weather in every report so far, so why stop now?!

This weekend started with the ever supportive message of "surely you're not going to enjoy it on your own in that weather" - That's Where You're Wrong (10/10 if you got that reference). Over the last few outings I have certainly had an increase in uptake of friends joining, this weekend's rather dreich weather outlook meant it was back to a solo expedition.

Don't get me wrong, there are definitely advantages to going out with others but there's something unique about being alone in the middle of nowhere with a compass, map and camera.

Now Walkhighlands estimate a 8-10hr trip, without fail I have found these timings normally pretty accurate so I set the 04:15 alarm and set of from Stirling, just in time so witness the early morning stumble home for a good few back to the university campus

As I was just leaving the Broxden roundabout to head north I was met with an array of blue flashing lights a couple of hundred meters up the road - "I knew I should of stayed in bed". As I got closer it became clear a few calves had escaped and were parading down the road. Not sure who look more scared, the calves or the young policeman standing in the middle of the road trying to stop them getting any further. Probably not how they expected the nightshift to end!

After the cowgate I had successfully made it to the start and was the first car to get parked up. Got everything packed up and set off by what must have roughly been 07:45.

Enjoying a bit of the wildlife at the start of the walk. 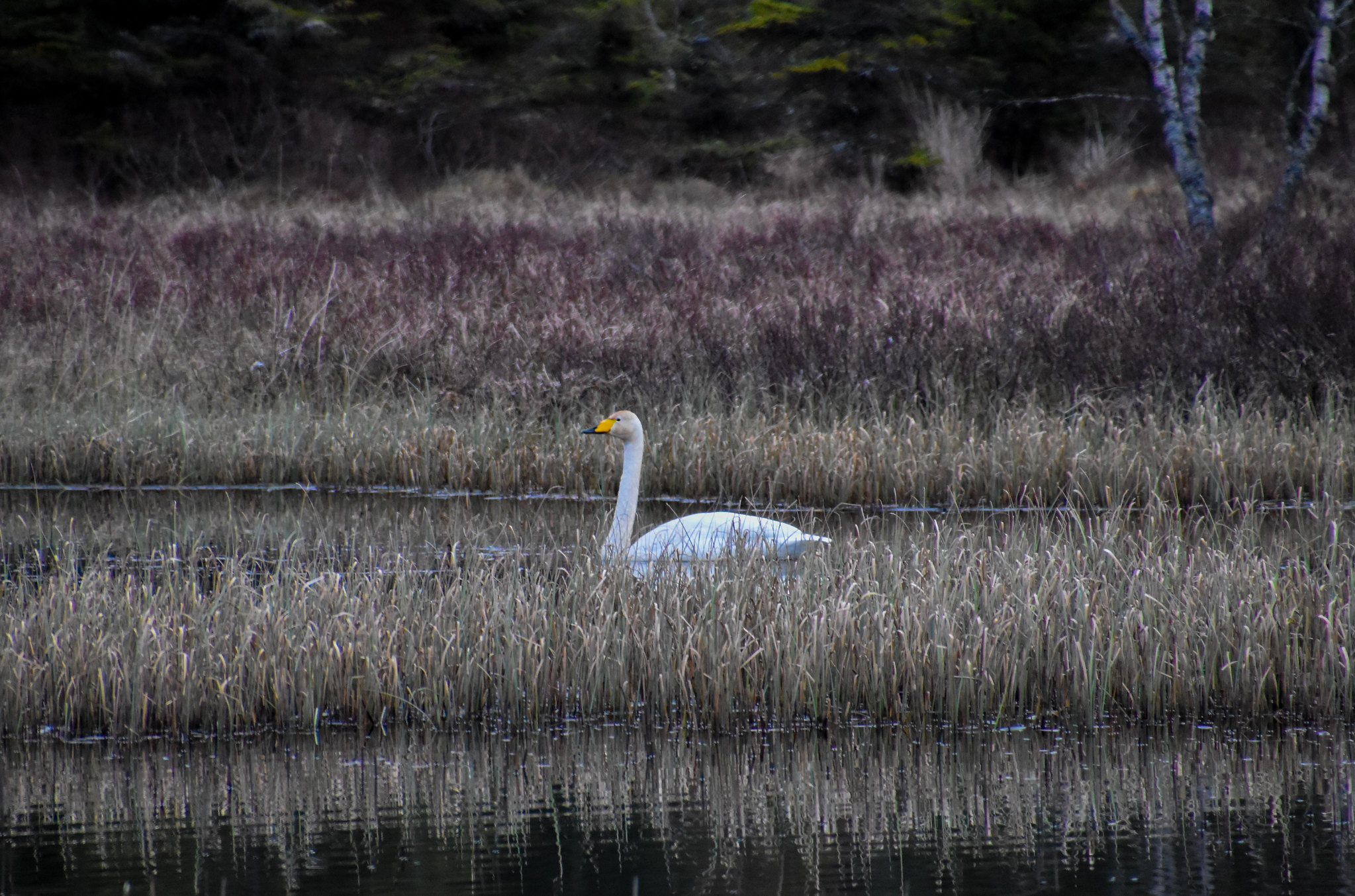 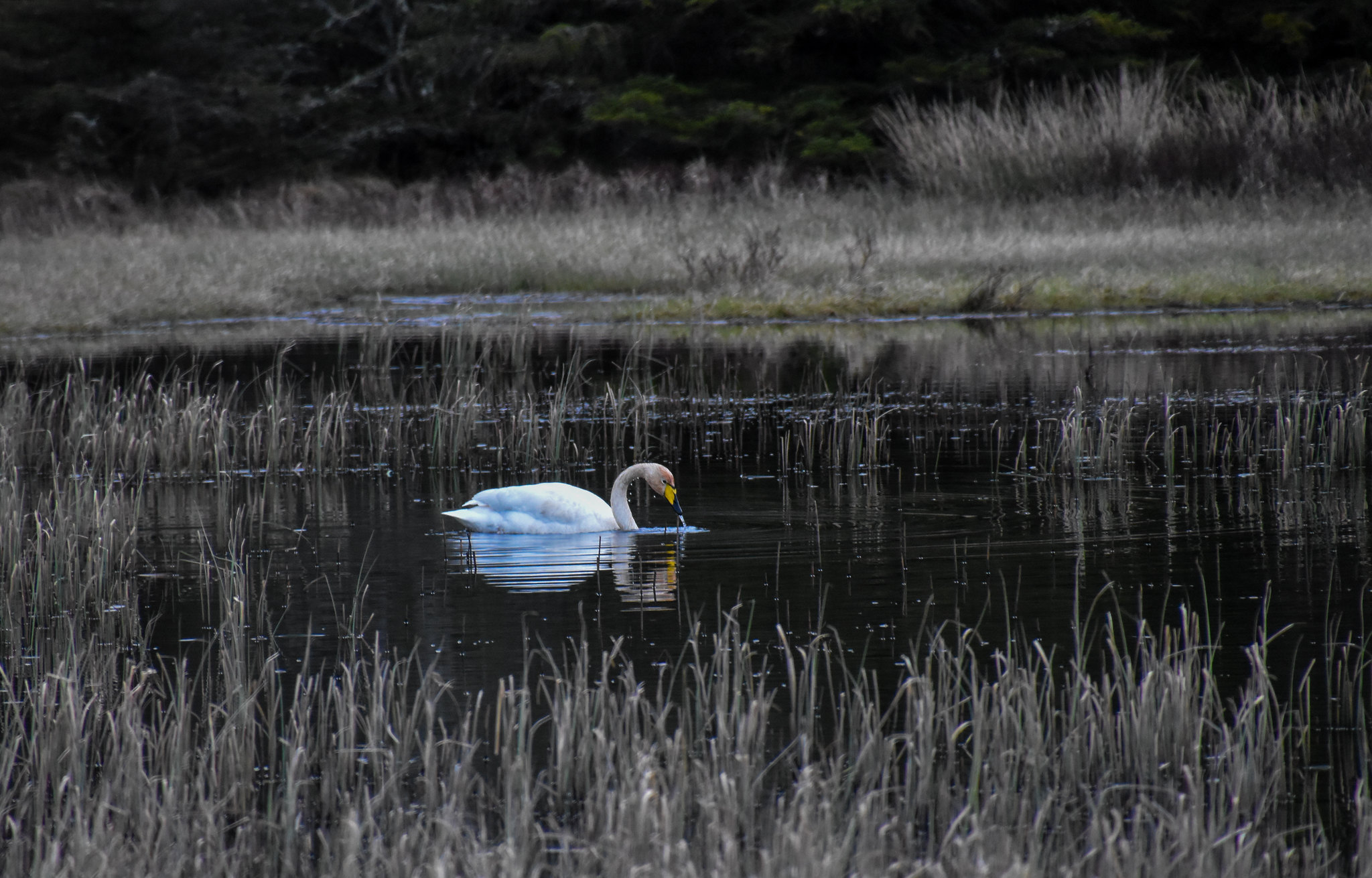 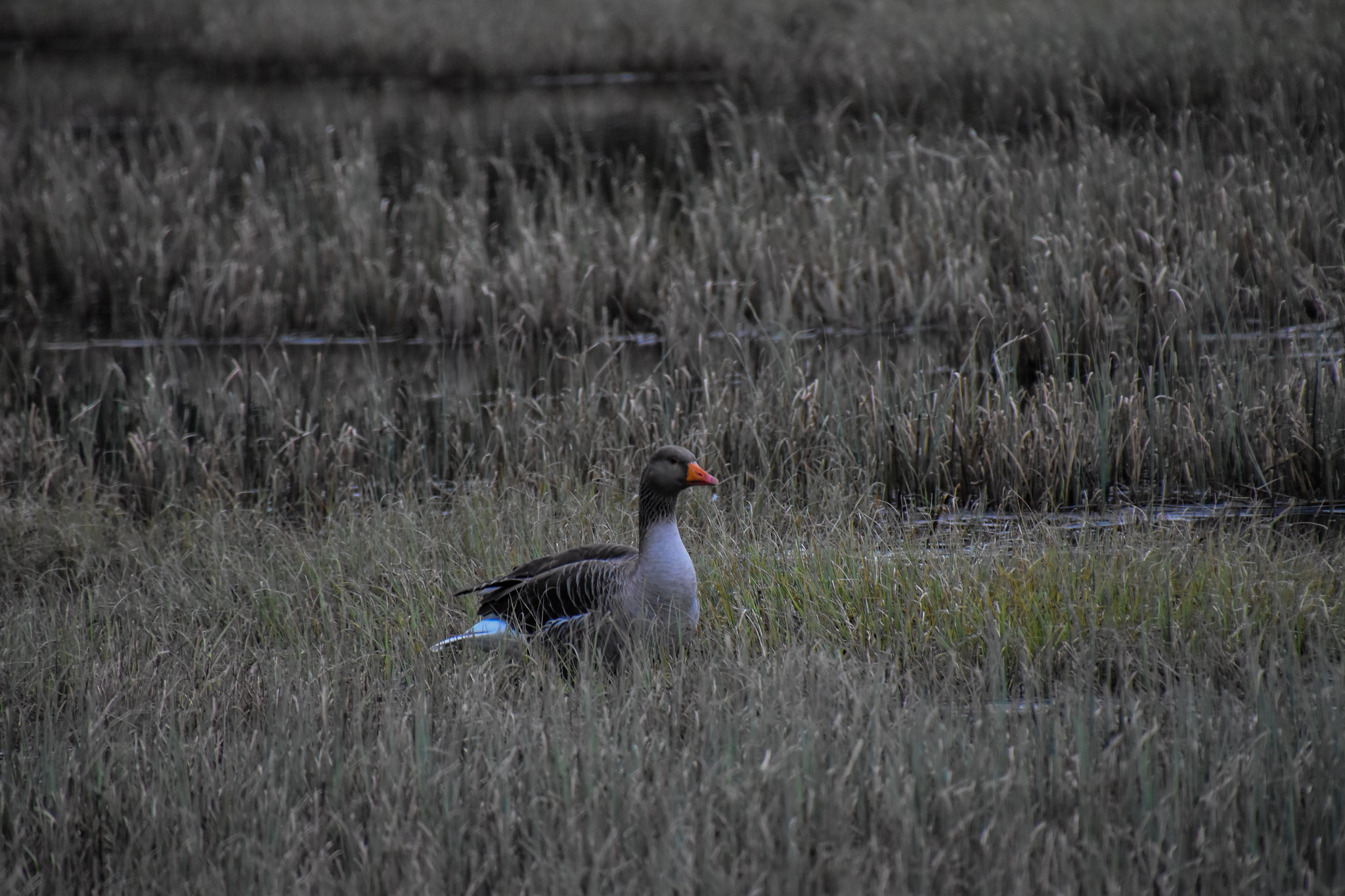 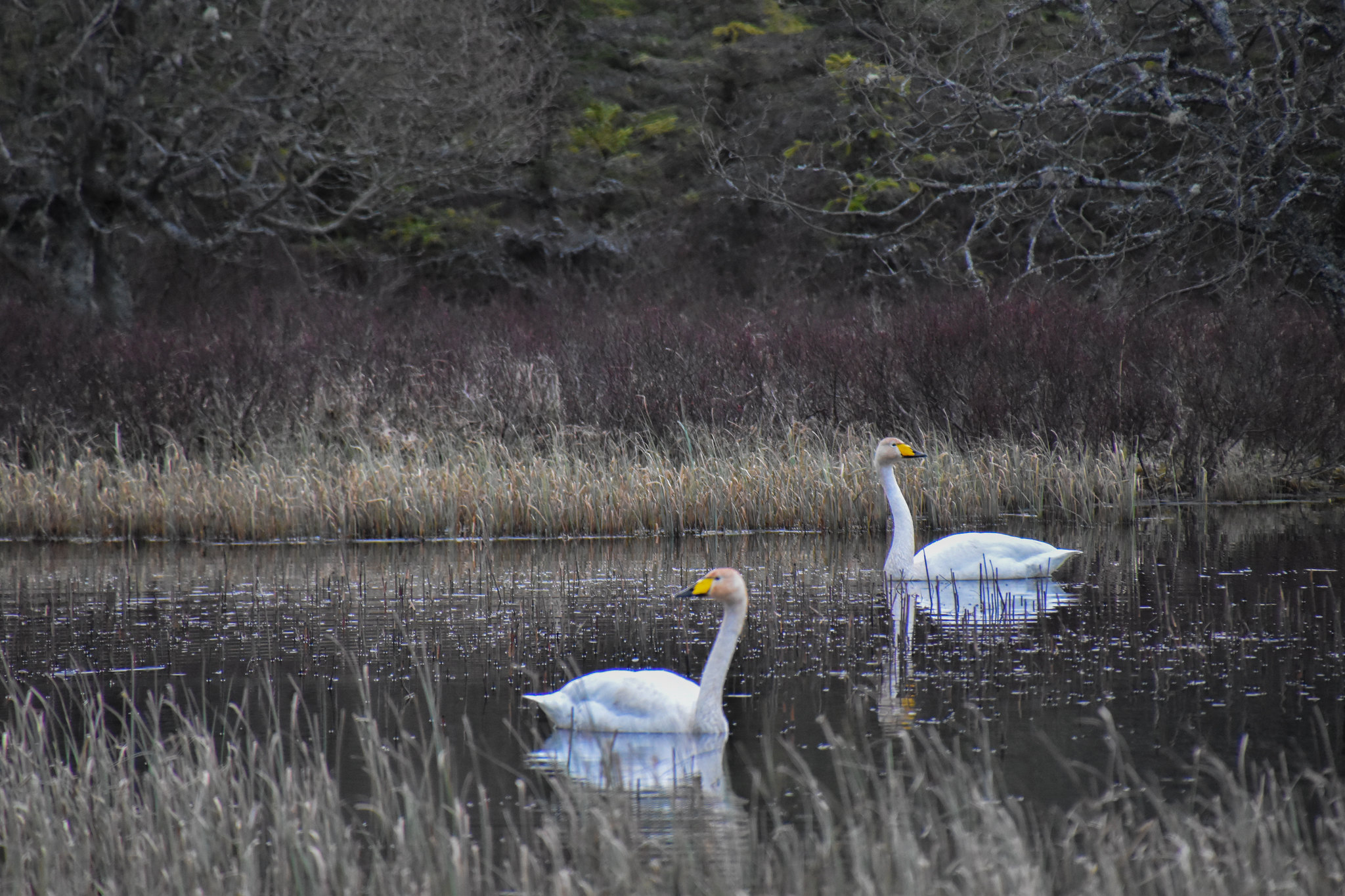 Now the weather wasn't looking great, but it was far from bad! What is bad weather anyway? I guess that is incredibly subjective.

View from the "car park" 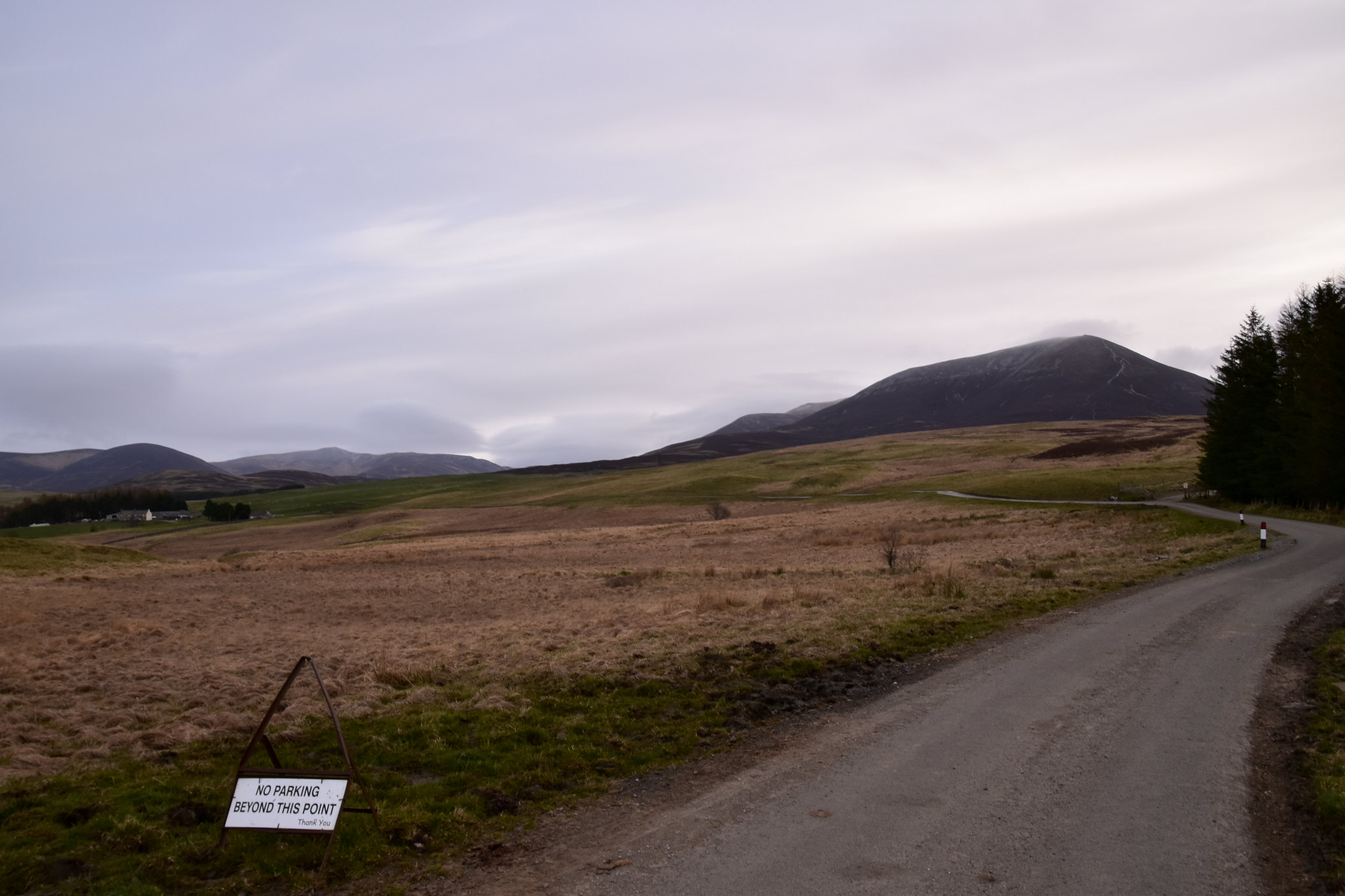 With the early start the cloud base remained (just) above the summit of Carn Liath. I had opted to use today as a navigation practice day - I kept the handy gps in the bag (just in case) but vowed just to use the old fashioned map and compass to see how competent I actually was.

No compass needed this far! 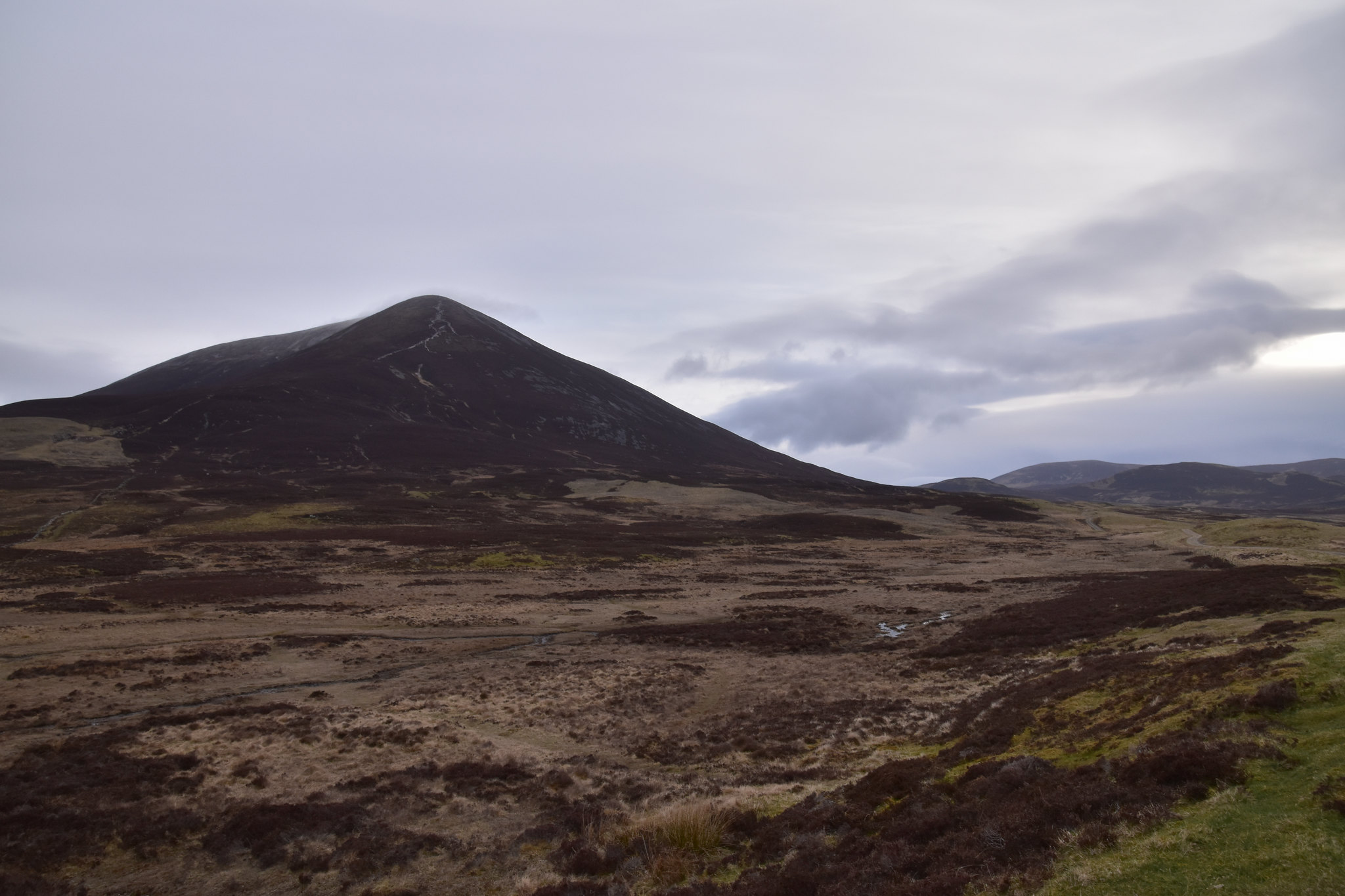 The start of Carn Liath, just after the wee hut (that I somehow didn't photograph), is rather boggy but after a couple of hundred meters you hit a rather obvious scar of a path.

Half way up, looking back towards my car - the birds photographed at the start were in the little pond. 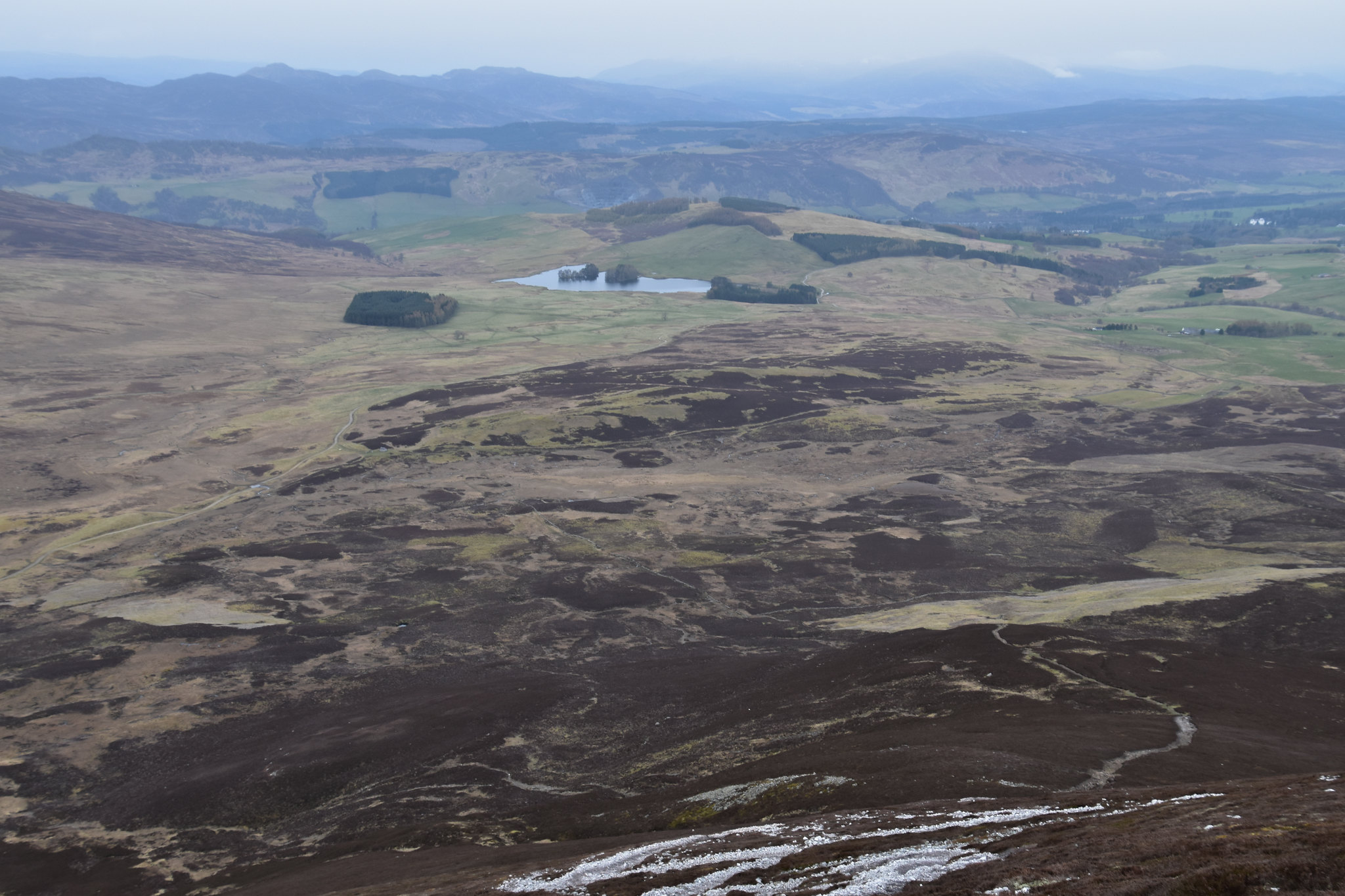 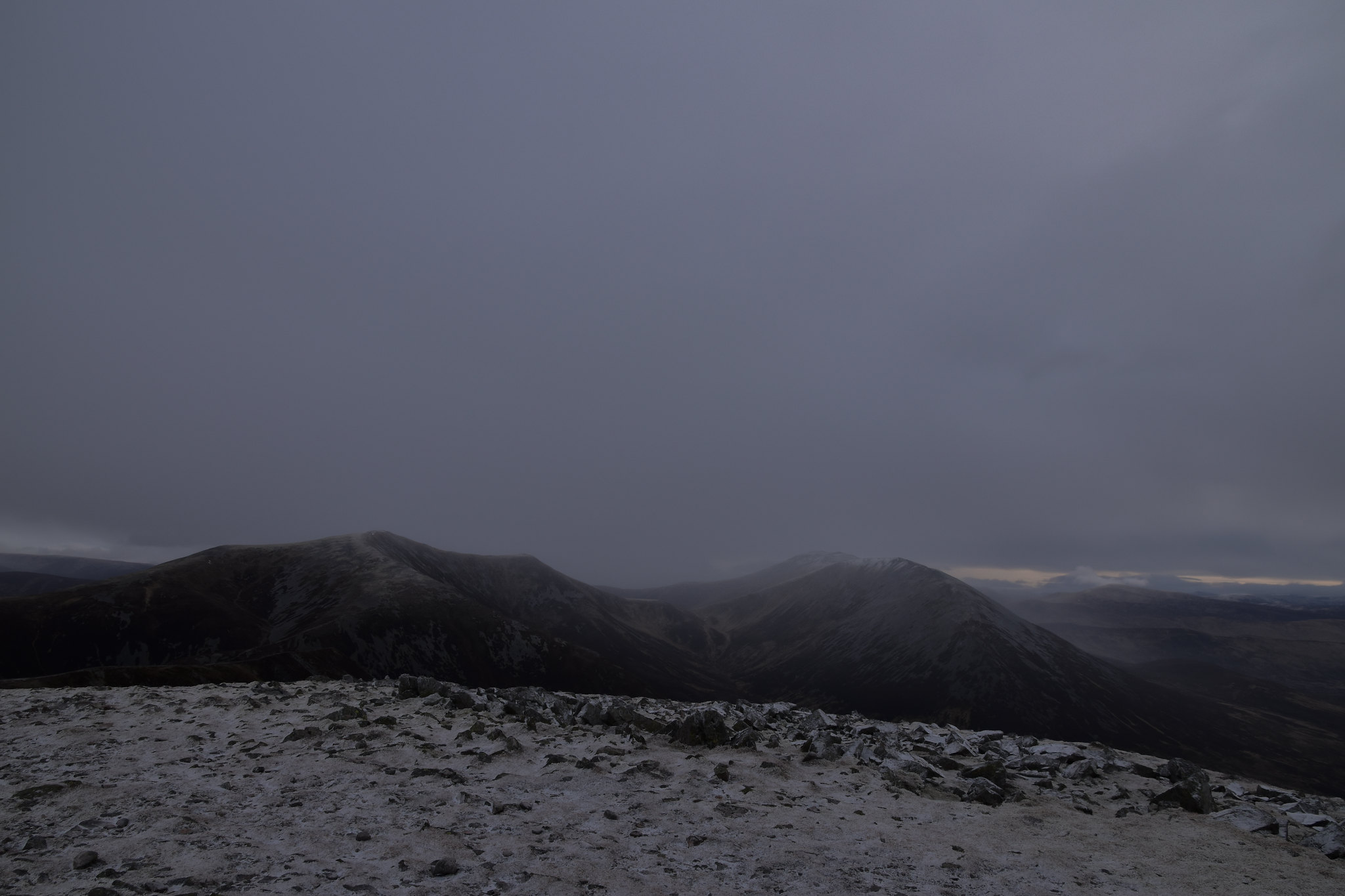 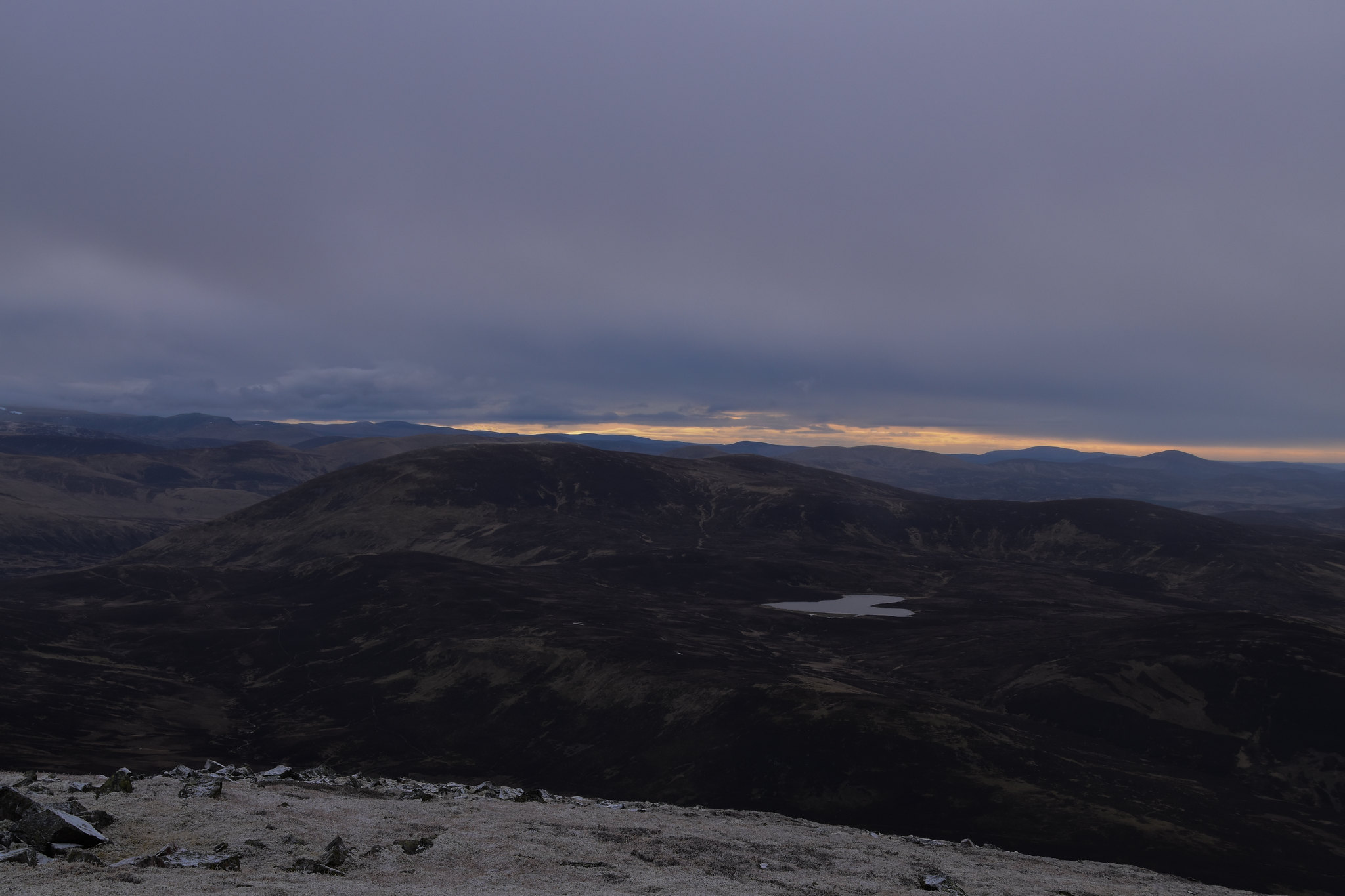 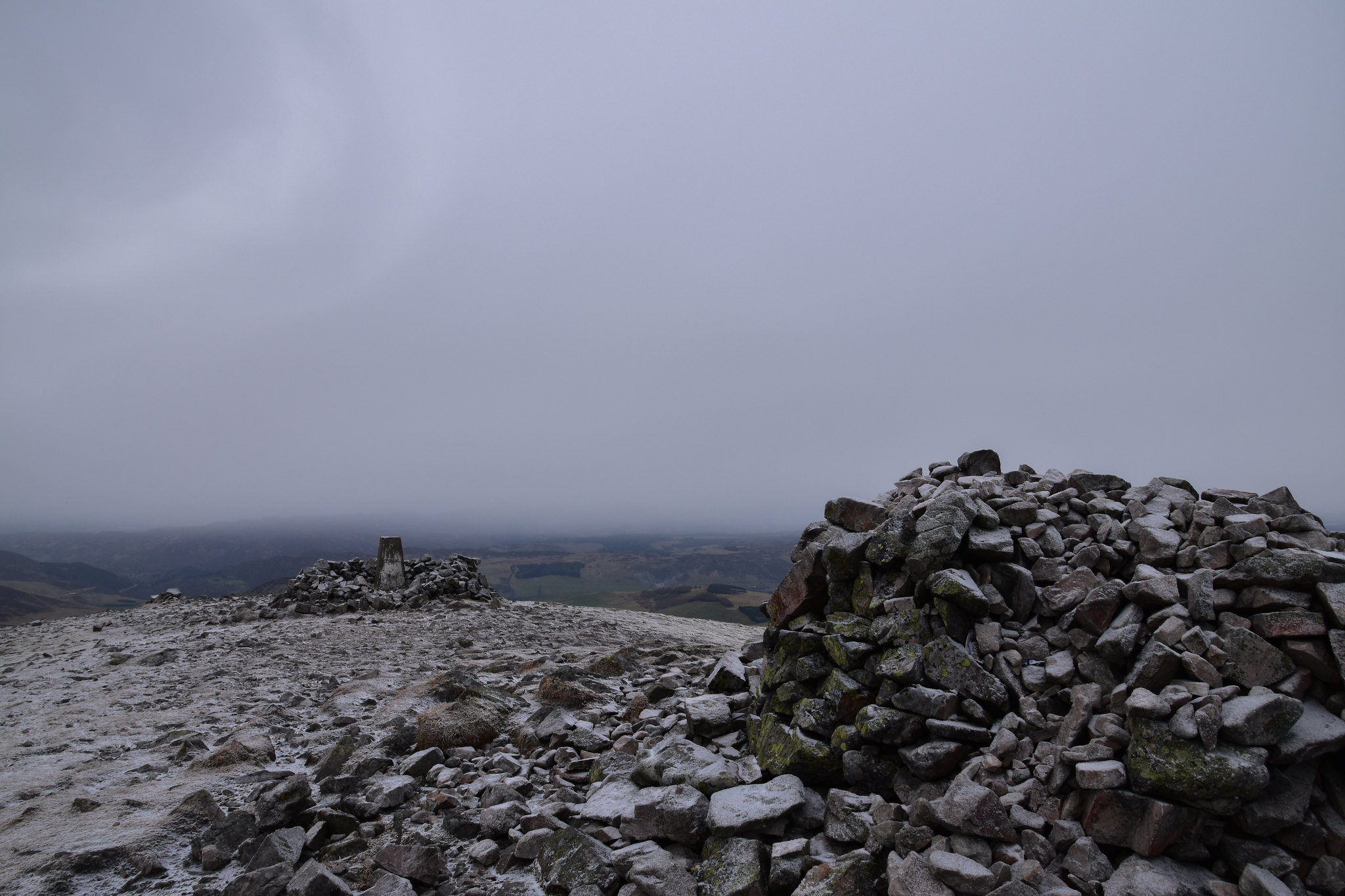 By now I was aware I seemed to be making quicker than normal progress - maybe that's a side effect of heading off alone? 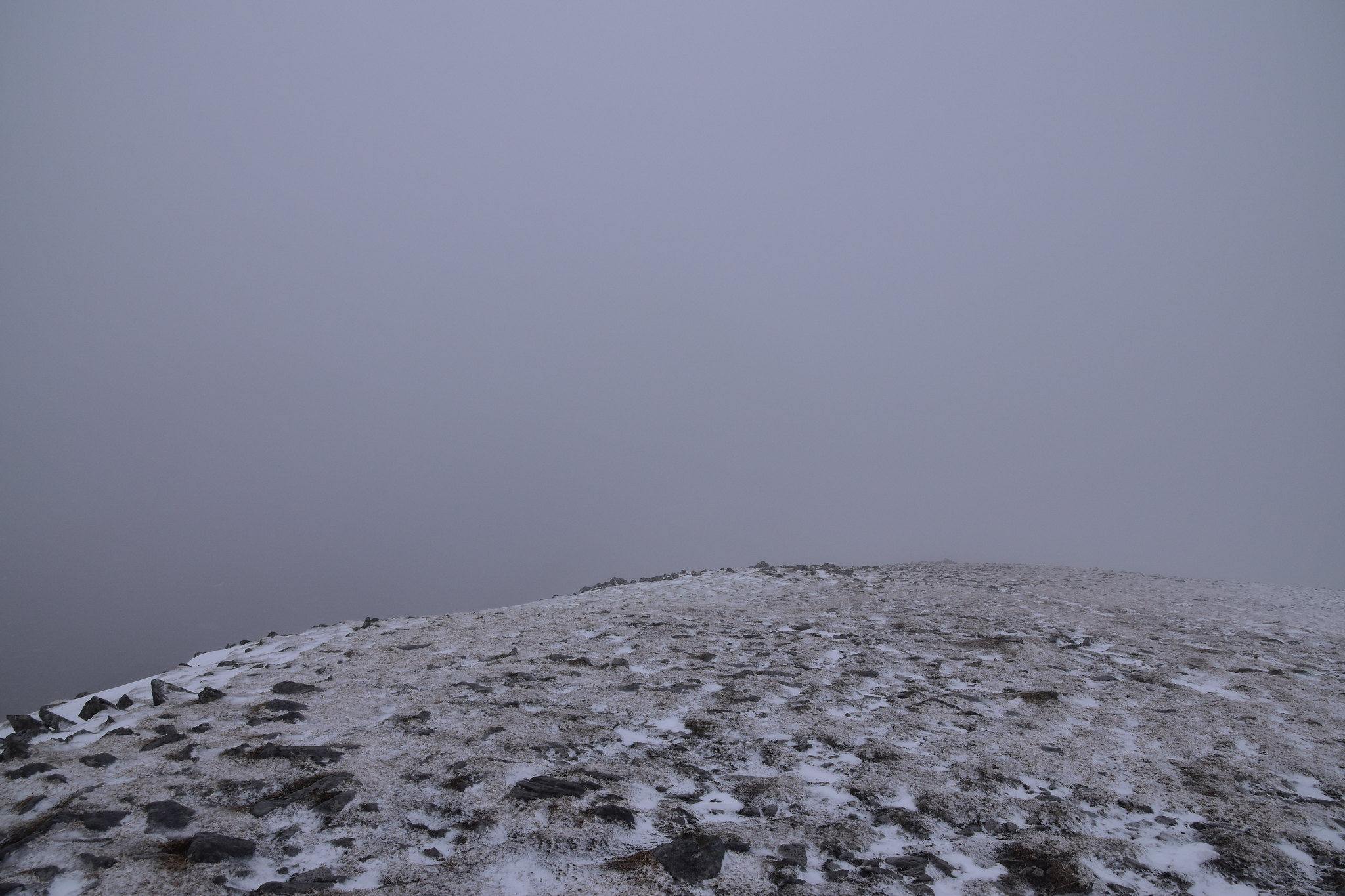 It began snowing and visibility became increasingly less, well, visible. Bad weather? Perfect nav practice weather I'd say! I opted not to stop for lunch instead moved all the consumables into my pockets and ate on the move.

I am surely not the first one, but the temptation to pie the 3rd munro and just head down after Braigh Coire Chruinn-bhalgain is enormous! It wasn't even 10AM there was no way I could head home early! I'm glad I didn't.

The top of Carn nan Gabhar, but first, let me take a selfie. 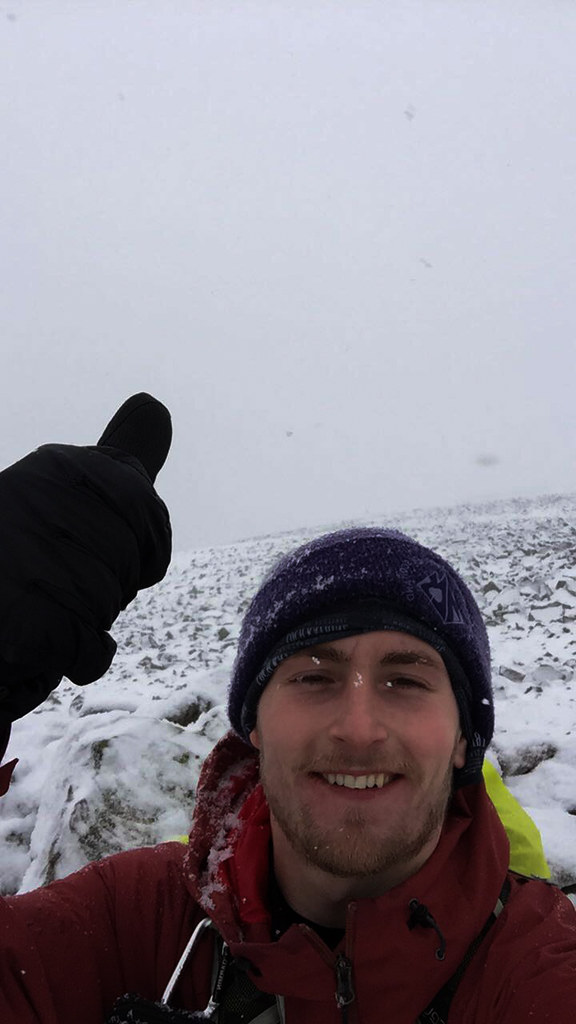 It continued to snow, but without a drop of wind - I can't remember another time on the hills that felt that peaceful. I almost contemplated if I was dreaming / dead.

With another three in the bag, all focus moved from whether I was asleep or six foot under and turned to how boggy the return section would be.....

Frickin' boggy is the answer!! 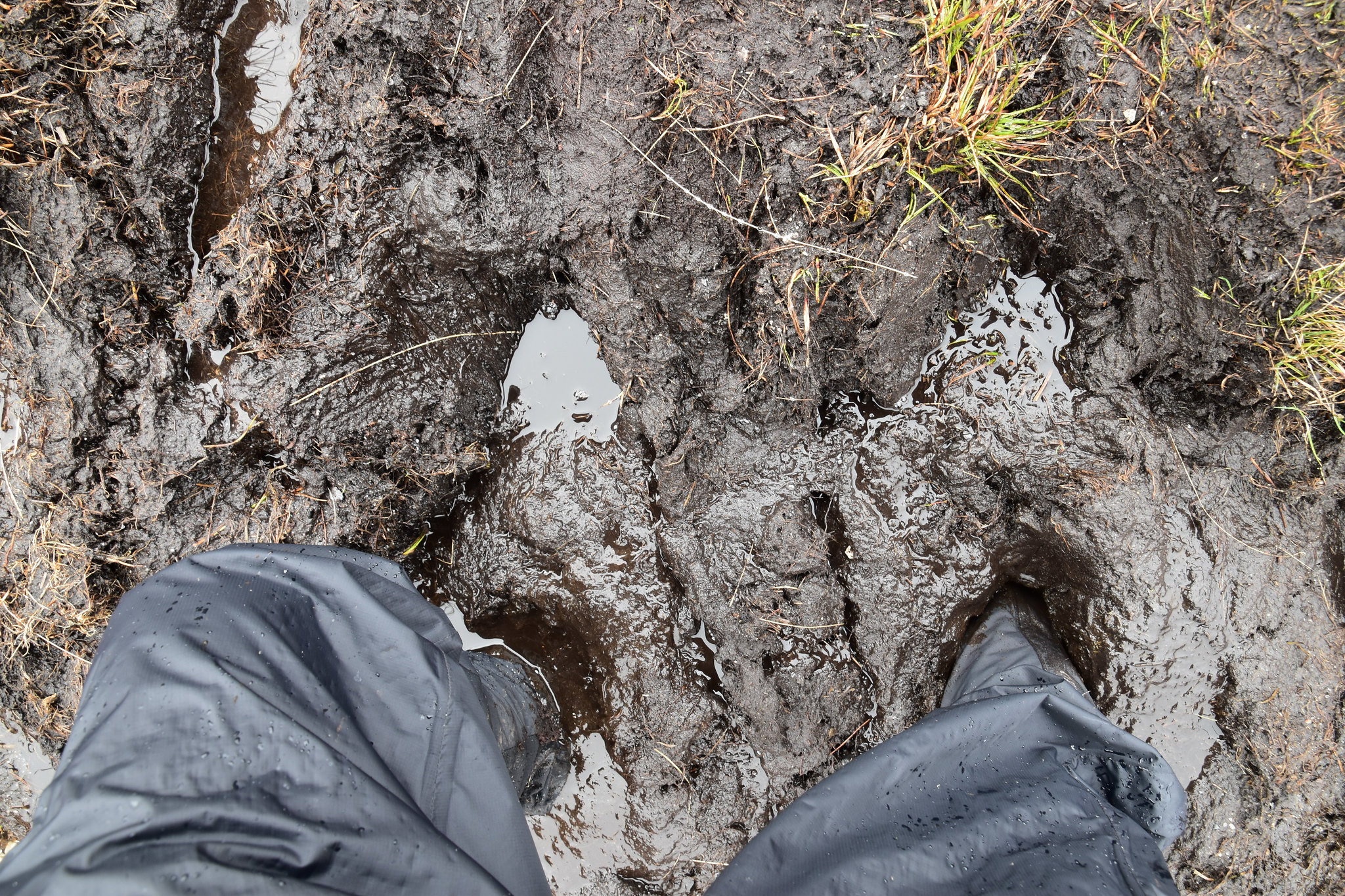 Unfortunately I had a few near knee deep entries into the bog...

. Although mentally tiring the section doesn't last quite as long as you will anticipate. Before long I was back on the well maintained path and heading back to the car (hopefully in time to catch the second half of the football on the radio!). 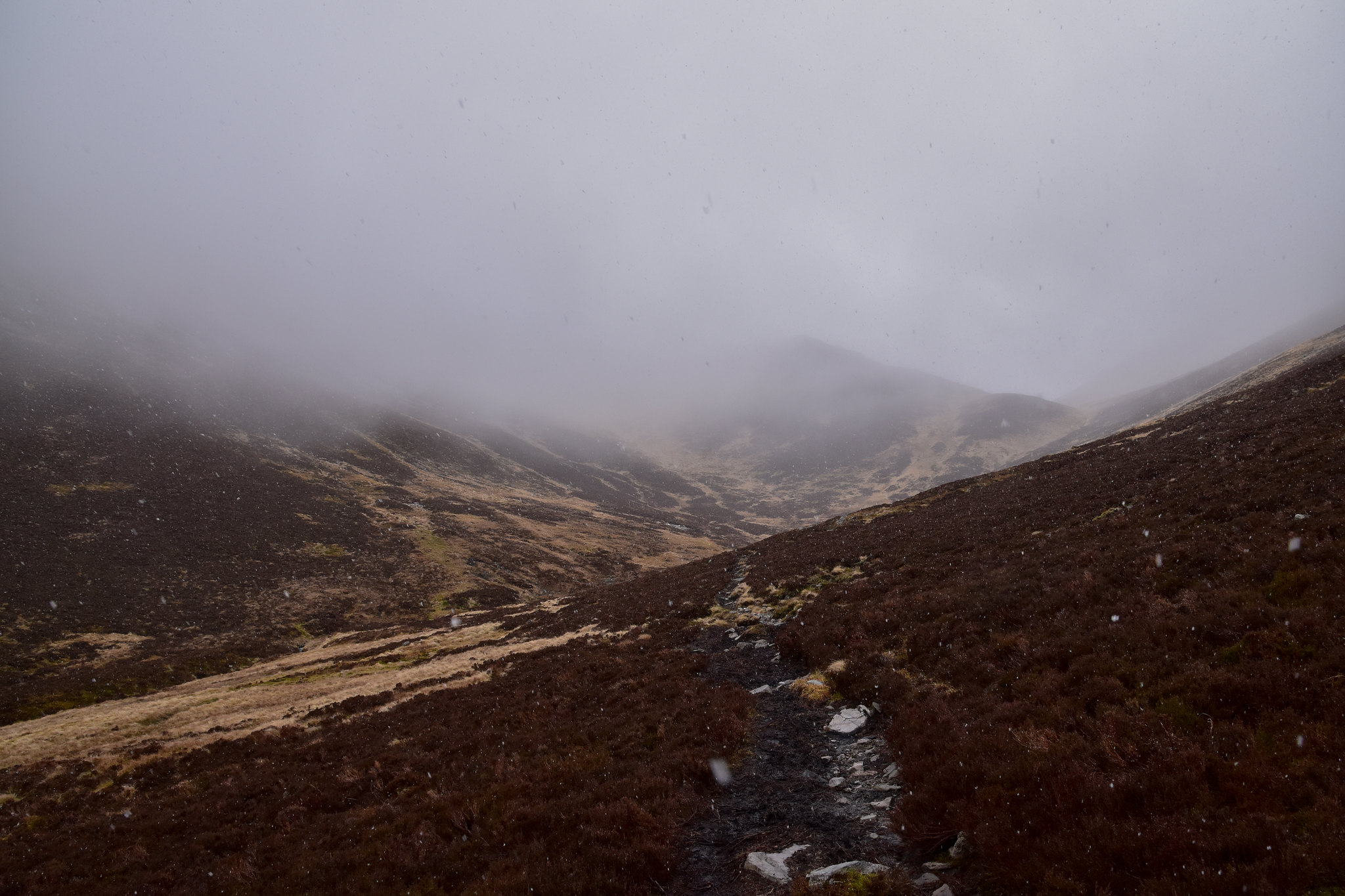 I must admit when I started hillwalking, wildlife wasn't even a thought. As the hill count increases the number of times I have rushed to pull the camera out has far exceeded any of my expectations - this was another example. 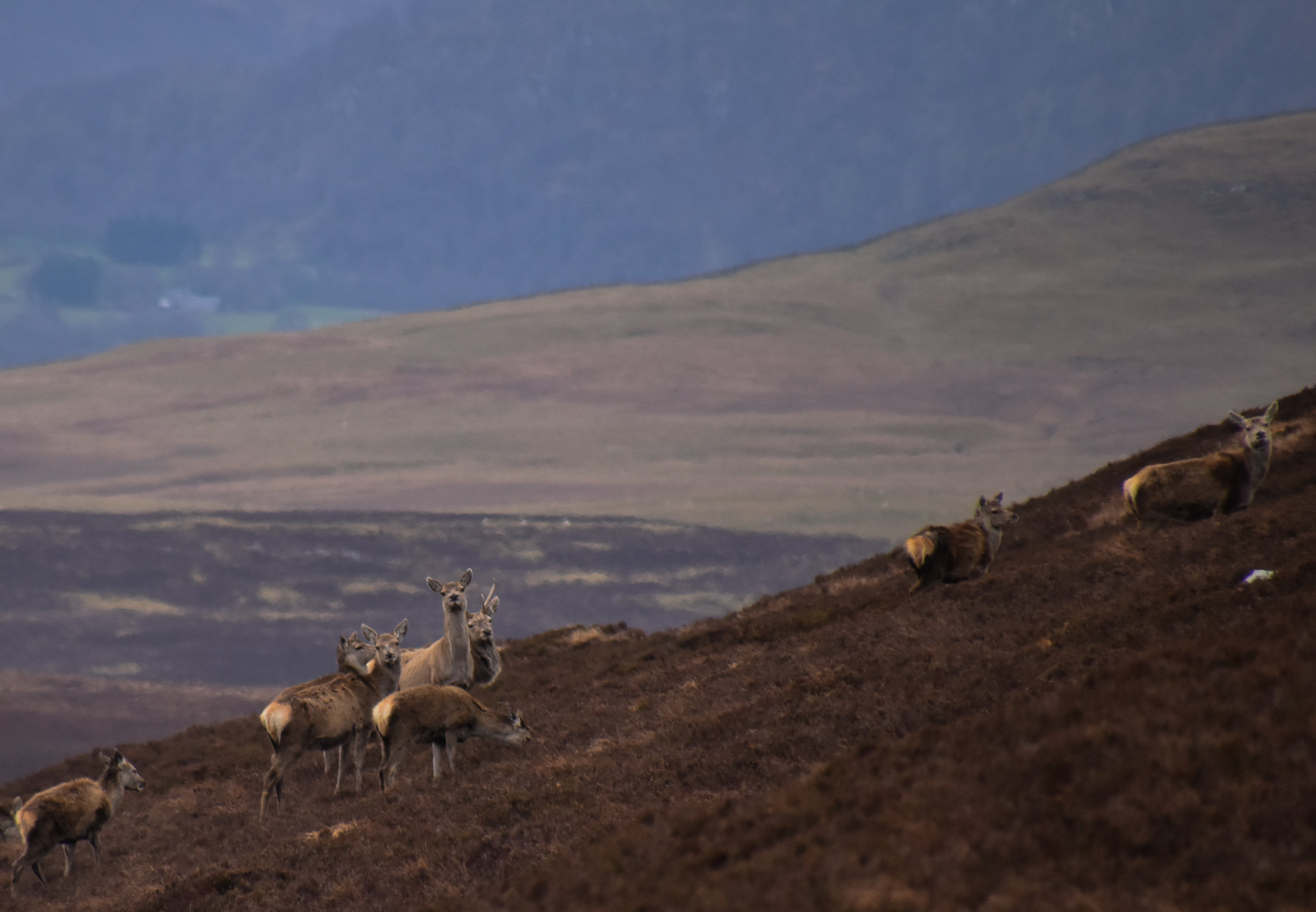 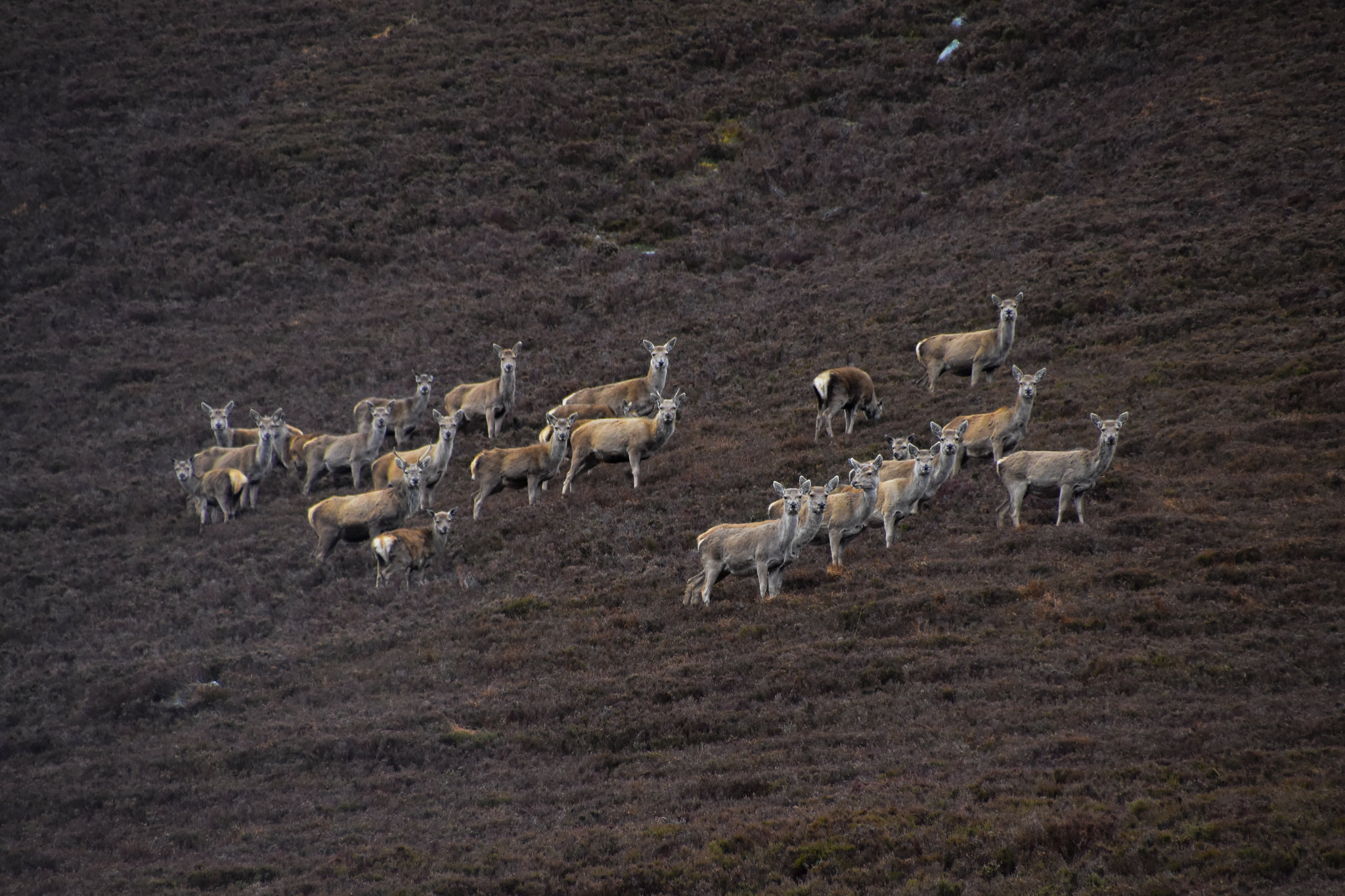 It does always clear up once you're heading back to the car! 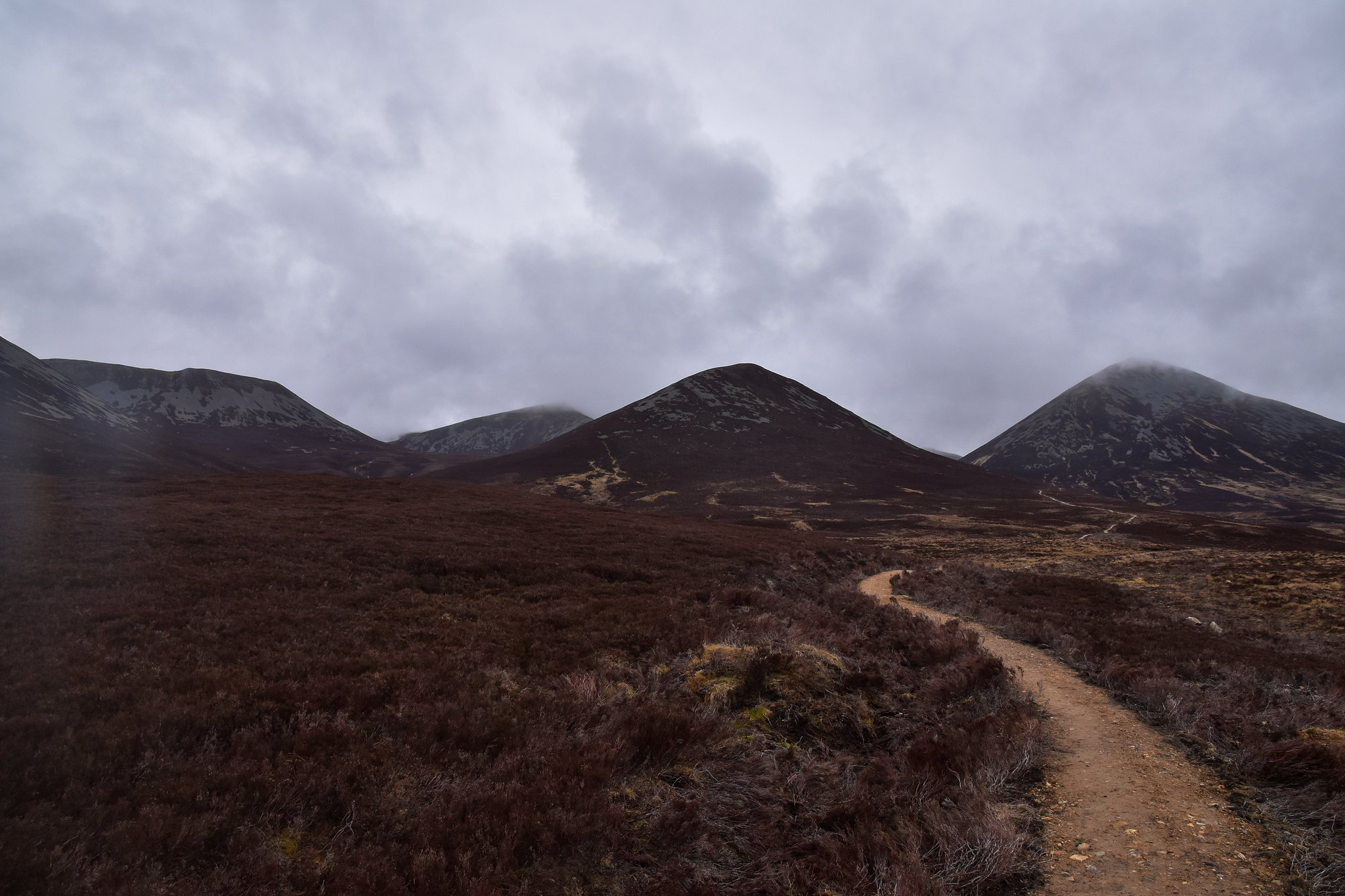 Five and a half hours after setting off I was back at the car which was now joined by a healthy others. I could moan about the plonker that someone managed to block me in, but.... after a 24 point turn and 2mm to spare I will give them the benefit of the doubt...

Was it worth it?

Simply put, a good long day walk. Even with poor visibility for the most part the fresh air, nav practice and seeing some more of Scotland's wildlife made it all worth that 04:15 alarm!

As I put the final touches on this walk report I have just finished packing the tripod, camera, tent, sleeping bag and food for another high camp - this time just off the Devils Ridge on the Ring of Steall! Now hopefully that report will offer some more views!!

Thanks again for reading, (if I happen to be reading this in my retirement home... hope ten in a row went well!

Sometimes a little bad weather adds atmosphere, and makes the trip far more interesting. There's a good feeling of satisfaction from navigating in poor visibility and then coming out from the clouds exactly where you wanted to be.

. As a bit of an Oasis-nut myself, I love your title. I was up Being a'Ghlo back in late September with great weather up to Carn Liath. Clouded over between the first two Munros, and by the second summit it was blowing a gale and lashing down with hail. With nothing but thin summer walking trousers to protect my legs, it was perhaps the coldest I've been in my life! We ended up leaving Carn nan Gabhar out. Just shows what Scotland's weather is like-completely unpredictable. Anyway I'm sure I'll get back up Being a'Ghlo in better weather and I enjoyed your report a lot.
Cheers

That was decent weather Andy. When I did those 3 I'd have been as well saving the legs and sticking my head in a filing cabinet for 7 hours, all I saw was grey