We have just completed the John O'Groats trail, North to South, as the first stage of a JoGLE which we will be completing in sections through the year. We set out from JoG on Thursday 27th April and completed it - more or less as per the guidance - on the morning of Friday 5th May. We camped every night until Inverness

The trail is a great experience and we would recommend it. It is challenging and tough in parts. Hats off to the volunteers who have established the route

Navigation - used 1:50,000 map sections printed from the OS map app with the GPS trace from the Walkhighlands site marked on it. We carried Jay's description of the route on a tablet, reading the next days description each evening. This was fine most of the time. Going in the opposite direction from Jay's description was sometimes tricky. The pictures help. Occasionally there were sections which were not waymarked and the map had insufficient detail to find the route. We just found alternatives. As mentioned on the site Jay's description differed from the GPS trace but we found both useful. Beaches are frequently easier to walk on than some of the described routes - maybe we were just lucky with the tides

Obstacles - We thought the River of Wester south of Keiss looked fordable at its mouth - the weather has been dry though. We only realised this having negotiated the diversion up to the A99 and followed the river bank down to the beach. The river bank was dry and easy to follow. We only had to wade one other river - the Loth Burn. The brand new bridges which the volunteers have installed were a real blessing and a pleasant surprise when we came across them. We crossed a lot of barbed wire fences, often with the stiles erected by the volunteers - they really helped. The proximity of the cliff tops themselves can be intimidating - this walk is a real challenge for anyone nervous of heights. The valley of the Ousedale burn was challenging, particularly the climb out!

Waymarking - this is often excellent but sometimes non existant. The trail is truly a work in progress. We encountered a variety of markers: white rectangles painted on posts (in some places the paint is already fading) ; white topped posts; white John o'Groats trail discs or boards; and in some sections lengths of red insulating tape wrapped around the wire fencing. Are these marking spots for stiles? This was the biggest waymark we found

Surroundings - Awesome scenery - particularly north of Helmsdale. Towering sea cliffs with huge Guillemot and other seabird colonies. This is a walk for sea bird watchers. Further south we walked along sandy deserted beaches for miles and miles 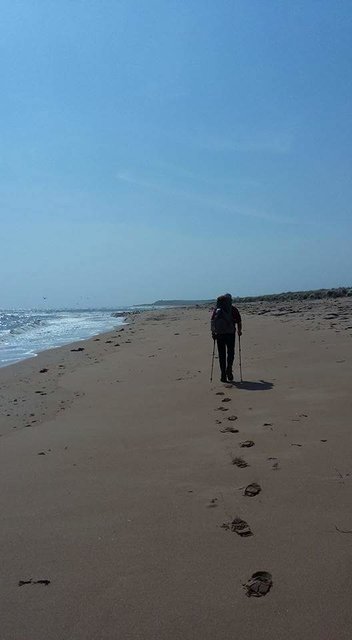 Accommodation. We camped every night -in fortunately dry weather. We stayed at campsites in Wick, Dunbeath and at the Brora Caravan Club site (cut across the golf course to get to it). Every other night was wild camping. Good pitches were hard to find but we managed. The best one was on the grassy platform at Clyth Harbour - surrounded by seabirds 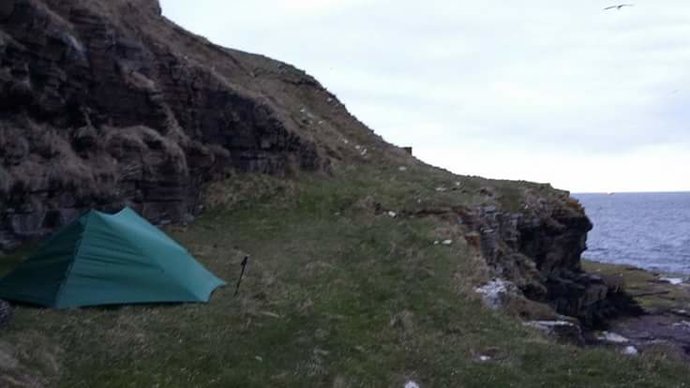 Food/Drink. There are shops and/or cafes all along the route. We took full advantage. The outstanding place to eat that we encountered was the Whaligoe Cafe. Most of the water we carried came from cafe's or the campsites. We only used filtered local water once - south of Berriedale

Locals - we met Charlie and Jet just south of Wick. His enthusiasm and passion for the trail was apparent and spurred us on. The owner of the campsite at Dunbeath assured us that it was impossible to walk the coast, particularly to the south. How wrong she was. Locals advised us to take a track down to the beach at Port Gower (leading to ND 004130) which seemed simpler than the suggested route
Thanks to all the volunteers and in particular Jay for making this trek possible

Thanks for giving a good report of how the trail is now. Glad you enjoyed it. Jay will certainly like the feedback.

Things will improve as time goes on, hopefully we'll get a bridge over the Ousdale burn soon. Our next project is marking the route south of the Broch.
Good luck with the rest of the walk.

Anyway it was nice meeting you both.

Thanks so much for posting this report. Yes, a work in progress, which makes it all the more exciting that people are already walking it this year. Thanks for your suggestion at Portgower, we will indeed be using that way you took.

All you long distance walkers out there. How about this trail for something different. You won't be disappointed.