The weather forecast was fantastic and my sister Jen was coming down from Shetland to Aberdeen, so meeting up in the Cairngorms for the day seemed like the perfect plan. After a lot of discussion about the logistics we decided to meet at the Braemar Bothy which turned out to be the perfect choice as it's almost impossible to miss it when coming into Braemar from either direction. After a cooked breakfast on the patio (along with feeding of a tame robin) and a lot of shuffling the contents of the cars, we headed off to the Linn of Dee rather later than originally planned, but feeling fuelled for a long day on the hills. Unfortunately I realised when I was about halfway to Braemar that I'd forgotten to replace the CF card in my camera after downloading my photos from our last hike... extremely annoying but at least I realised before we were out on the hills so I saved myself from carrying the extra weight.

I was amazed how extensive and how full the Linn of Dee car park was (and indeed when we finally returned at the end of the day it had pretty much emptied out) but managed to squeeze in and set off through the woods. There seemed to be so many people around at this point I was wondering if our walk was going to feel more like a walk in the local park! Once we reached the main path we took a short detour down the little trail straight opposite to see the salmon ladder and find the geocache whose details I'd taken care to bring with me. The water looked incredible and we were both dreaming of taking a dip until we tested the water temperature! 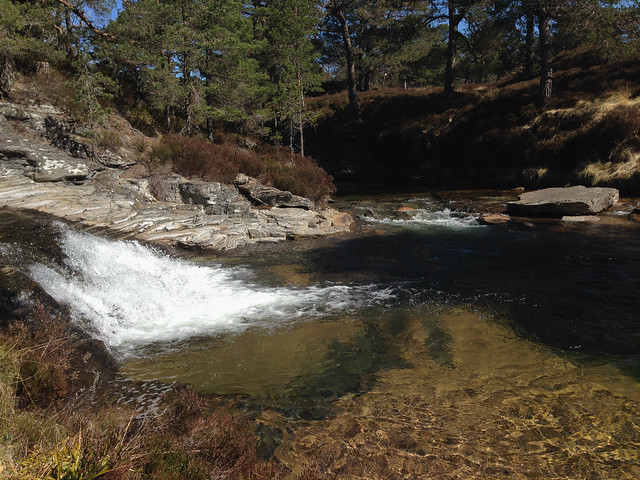 The walk to the Derry Lodge passed fairly quickly and was easy going, although it always seems a bit like cheating to walk along such a well defined path. 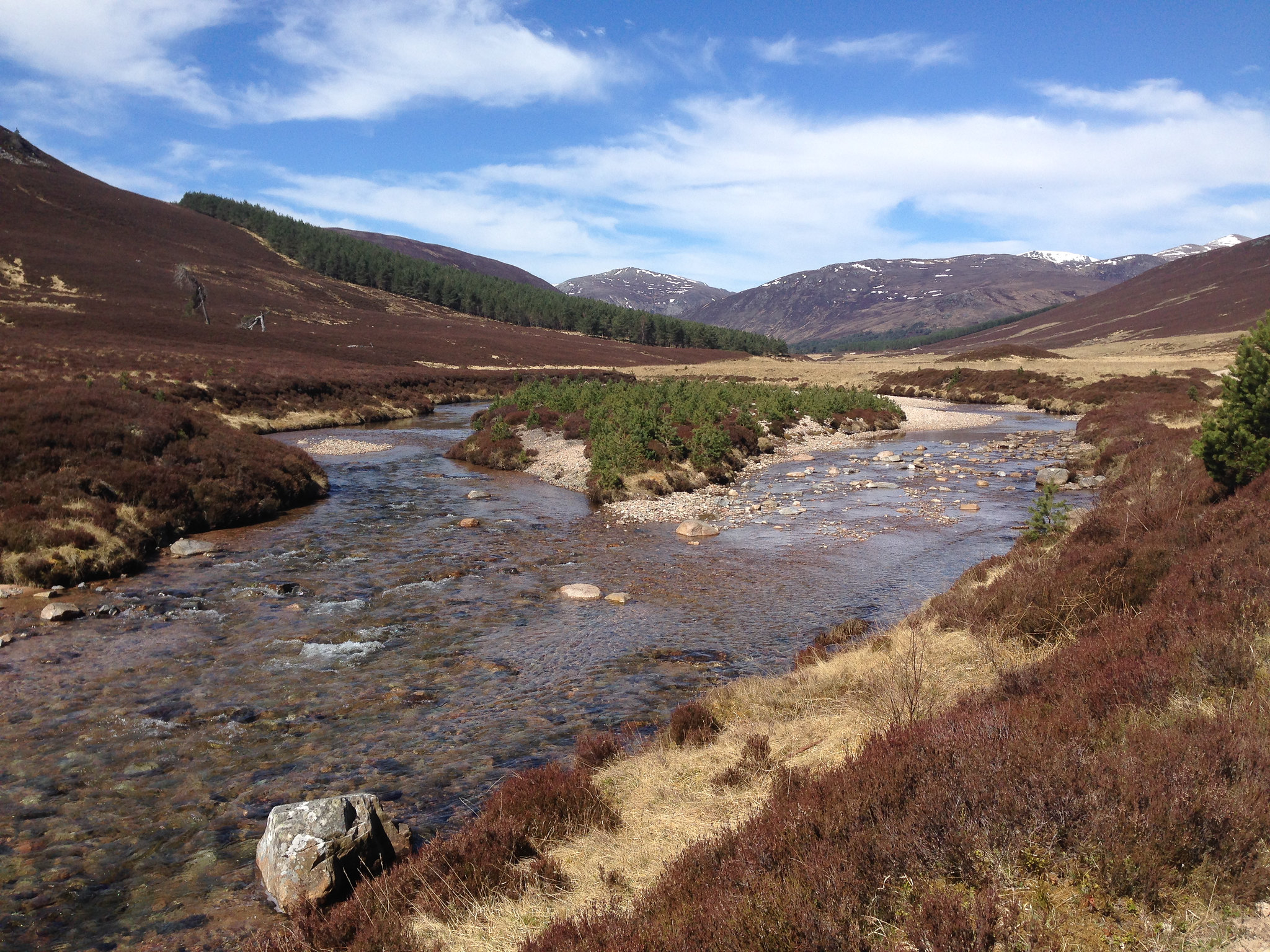 As anticipated we were passed by quite a few folk on mountain bikes along the way, which made it hard to imagine that we were heading into the wilds. The area around Derry Lodge was littered with mountain bikes and there were quite a few tents set up by the river. I think we were both a little jealous of the campers. We could see the mountains ahead and started getting excited about the hints of snow still to be seen. In the meantime, though, the long walk in continued and it took a while before the mountains really looked close by.

Once we got into the wooded section we were overtaken by some valiant mountain bikers who were persisting with their bikes beyond Derry Lodge. However much I can see the advantage of bring a bike as far as the lodge, it didn't look too much fun by this point as the path was narrow and uneven and the bikes were being carried much of the time. We left them to their hard work and sat down by the river for a lunch break - hunks of cheese and crisps were the order of the day and we took the opportunity to dabble our toes in the water, although we couldn't keep them there for long! As we set off again up towards the Luibeg bridge we met our mountain bikers coming back towards us, bikes in hand. They'd decided to give up and stop for a sandwich and although we thought we saw them coming after us later we never did see them again. 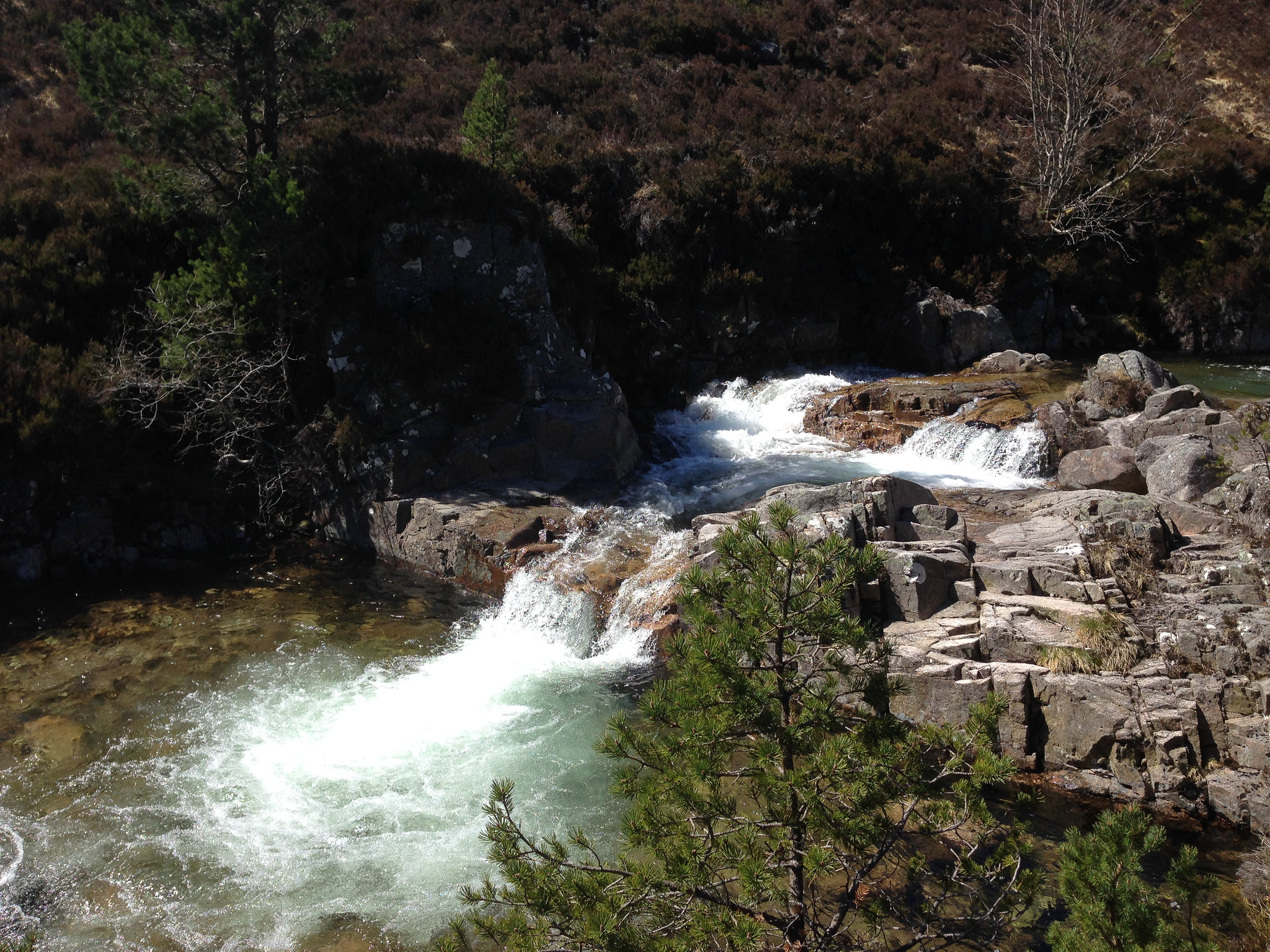 The river at the Luibeg bridge was gorgeous and worth stopping to photograph and Carn a'Mhaim was now in our sights. This was the point where the flat walking was over and it was time to grit our teeth and start the climbing. As ever, that first bit of climb was a challenge as our legs adjusted to what we were asking of them, and we had plenty of pauses to stop and admire the view behind us. We'd not got that far up the hill when we stopped suddenly - two ptarmigan ahead, and they hung around long enough to give us a good look. How I wished I had my camera and telephoto lens, so many great ptarmigan photo opportunities ensued! 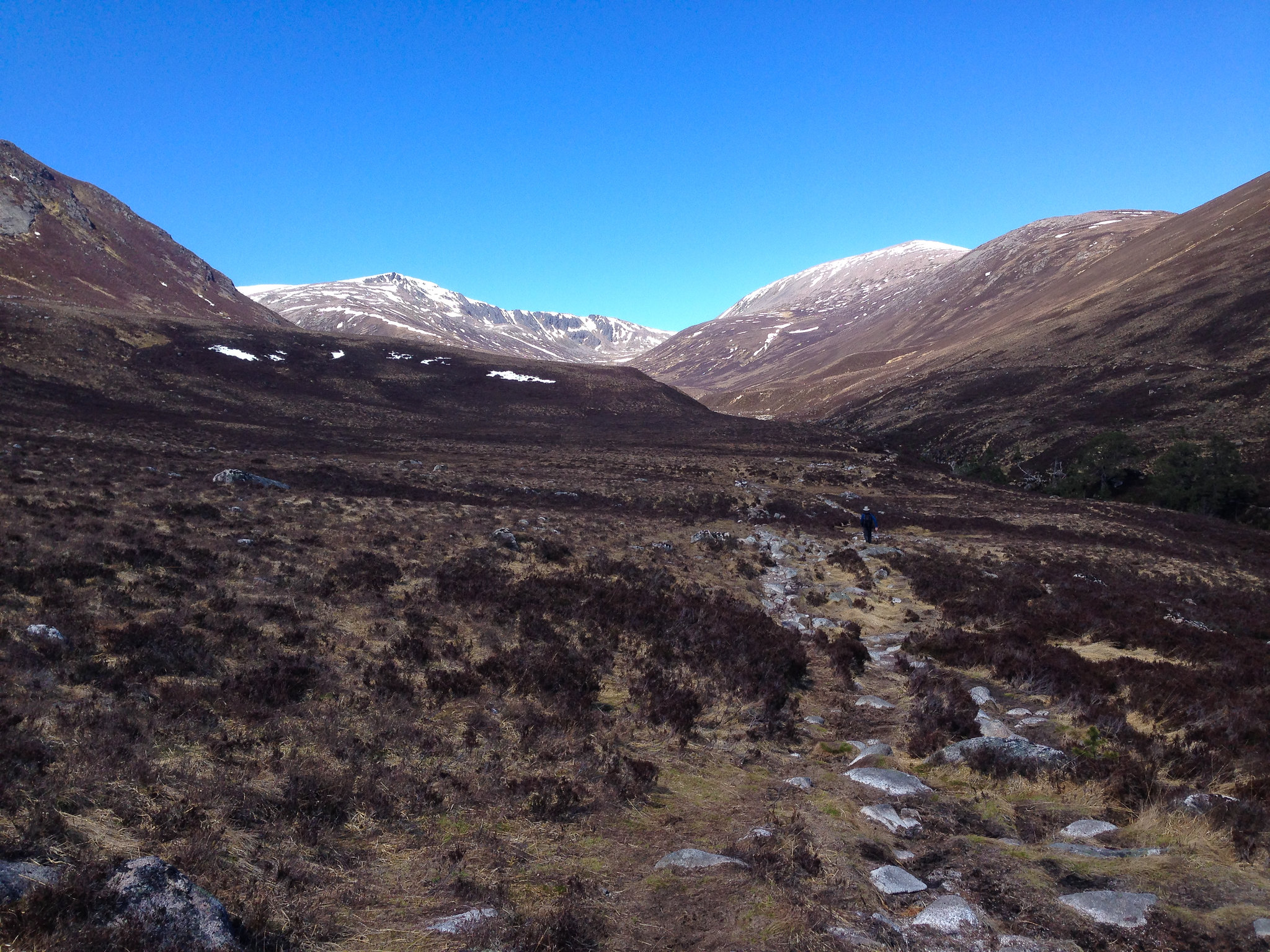 Up we plodded and plodded, with a couple of diversions as we found immensely appealing snow patches. We were getting pretty overheated by this point and flinging ourselves onto the snow seemed like the perfect solution. 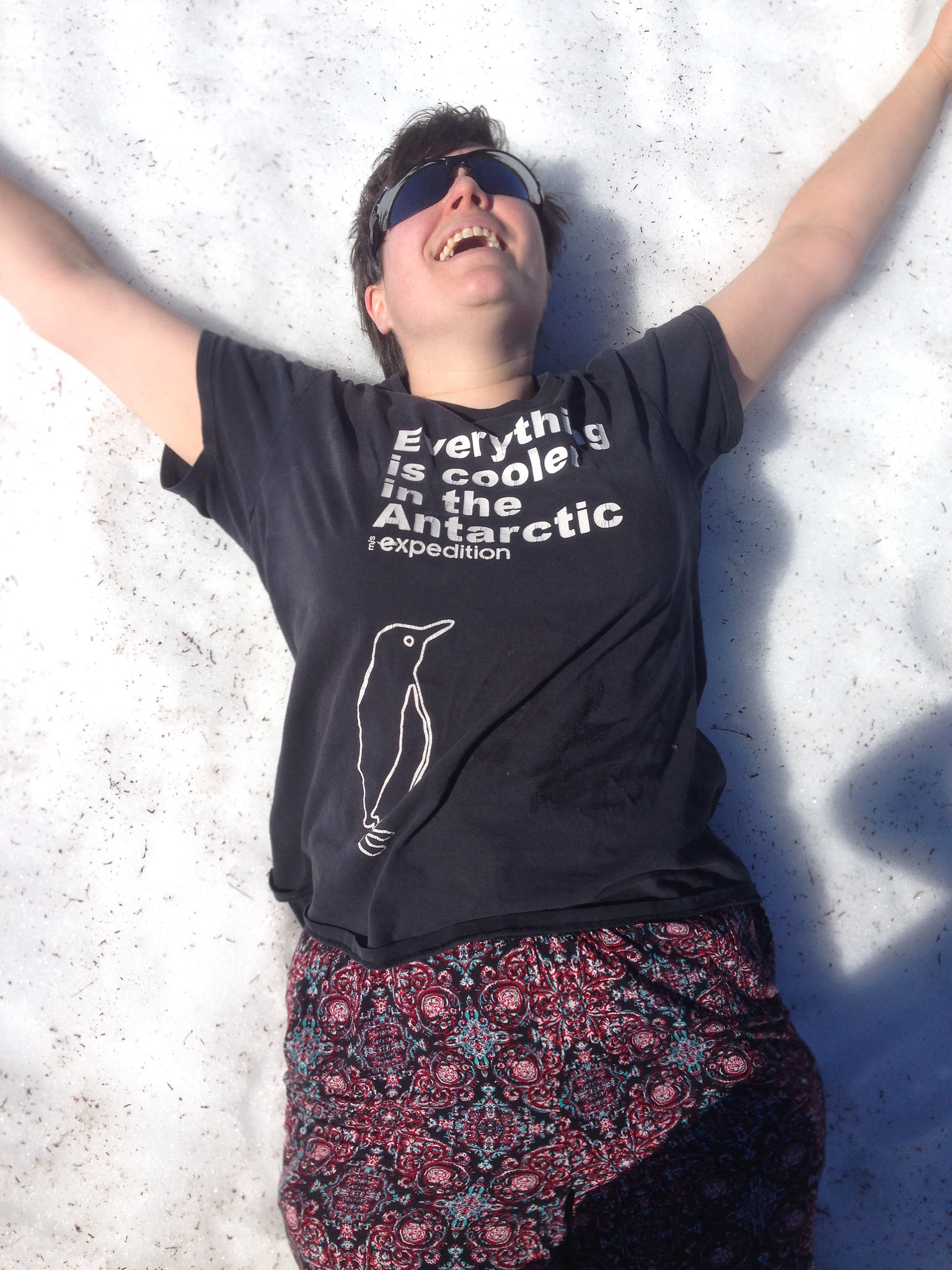 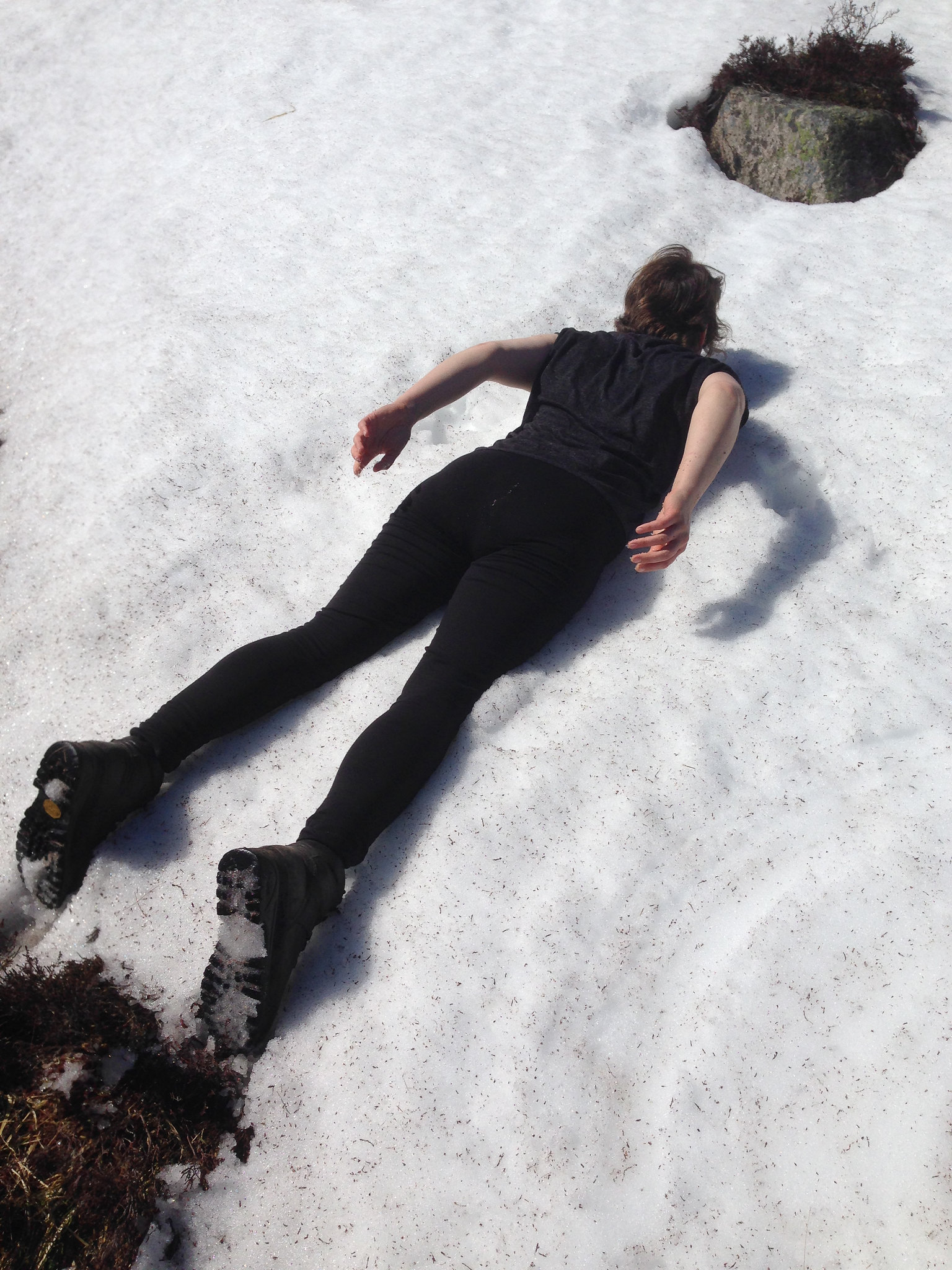 Despite our fears at the start of the walk we had the mountain almost to ourselves, although there were two small figures far down following us up. They overtook us on the boulders as we stopped to admire another pair of ptarmigan. One scramble up the last lot of boulders and a bit of a walk and we reached the summit. 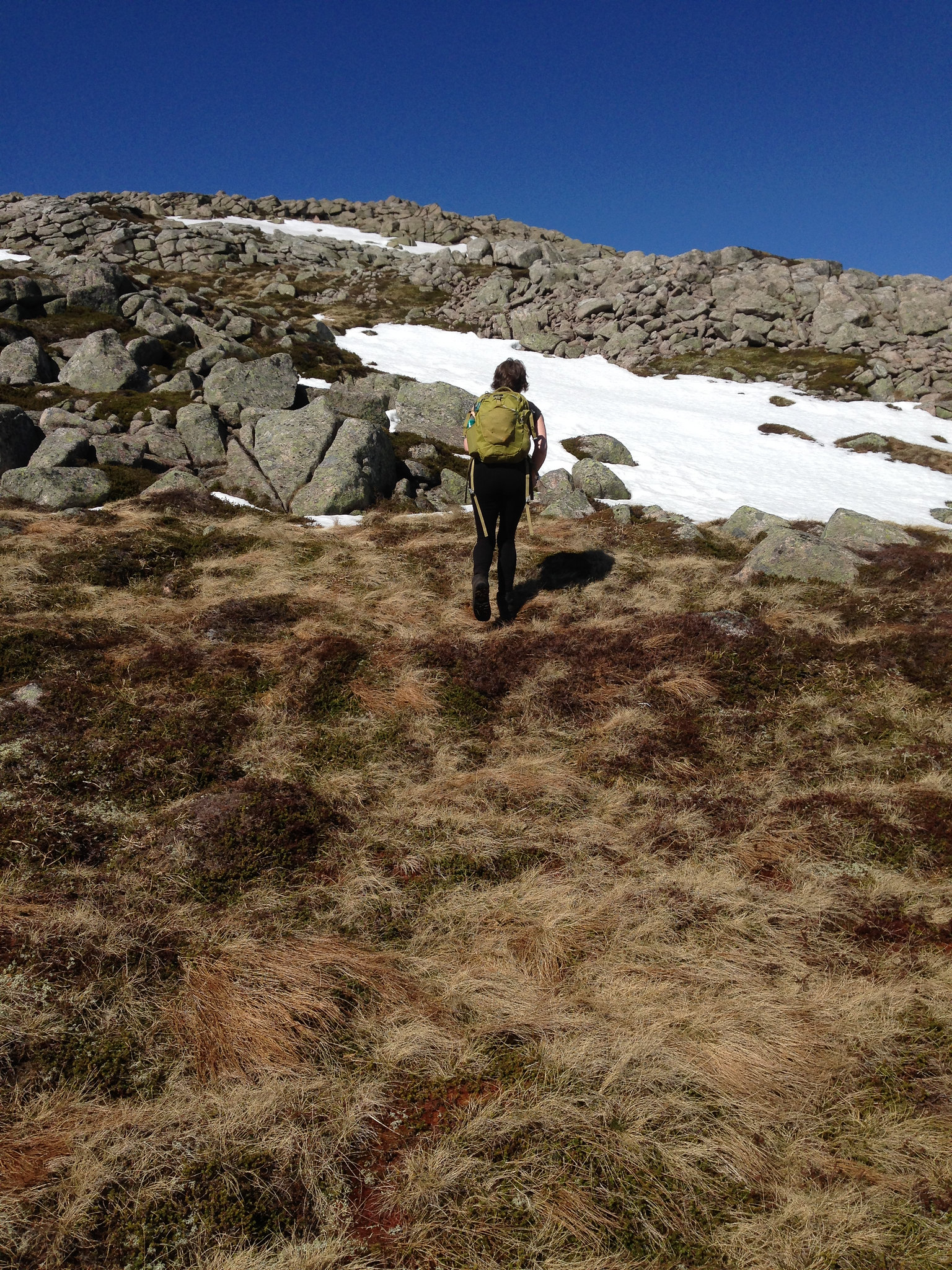 After a quick admire of the ridges of Sron Riach, we found ourselves a good vantage point where we could enjoy the view of the Devil's Point and topped up our lunch with some quiche and cocoa. On our last walk 2 weeks ago the cocoa was amazing as it was a much colder and windier day. Today's cocoa unfortunately had a bit of a mouldy aftertaste as we'd forgotten to clean the thermos out, and in the sun it wasn't quite as enticing, although we both enjoyed it all the same. By this point it was late afternoon and the sun was directly in our faces, so I'm already planning to come back with my proper camera and to get to the top earlier in the day so that I can enjoy a better view of the Devil's Point. 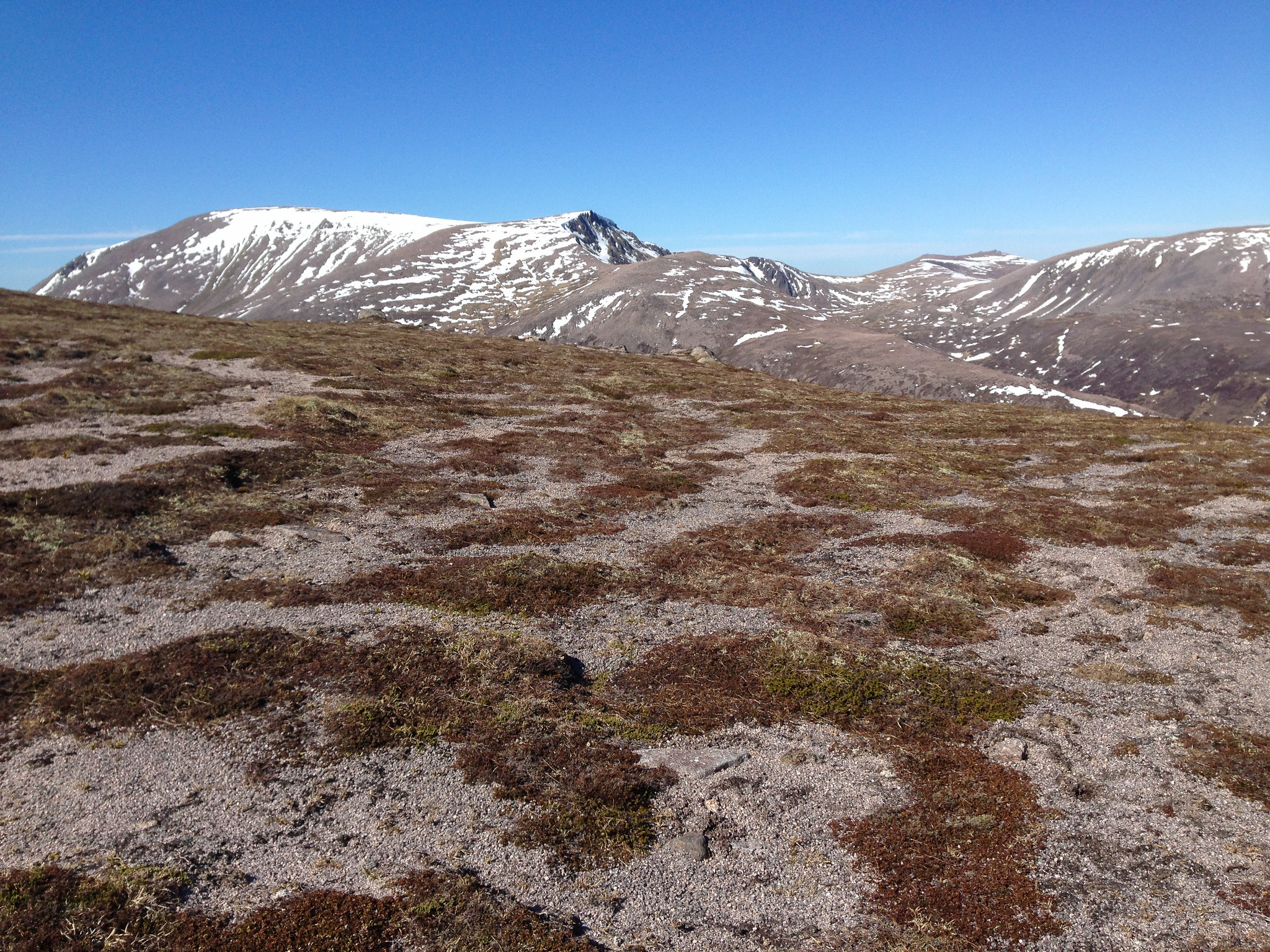 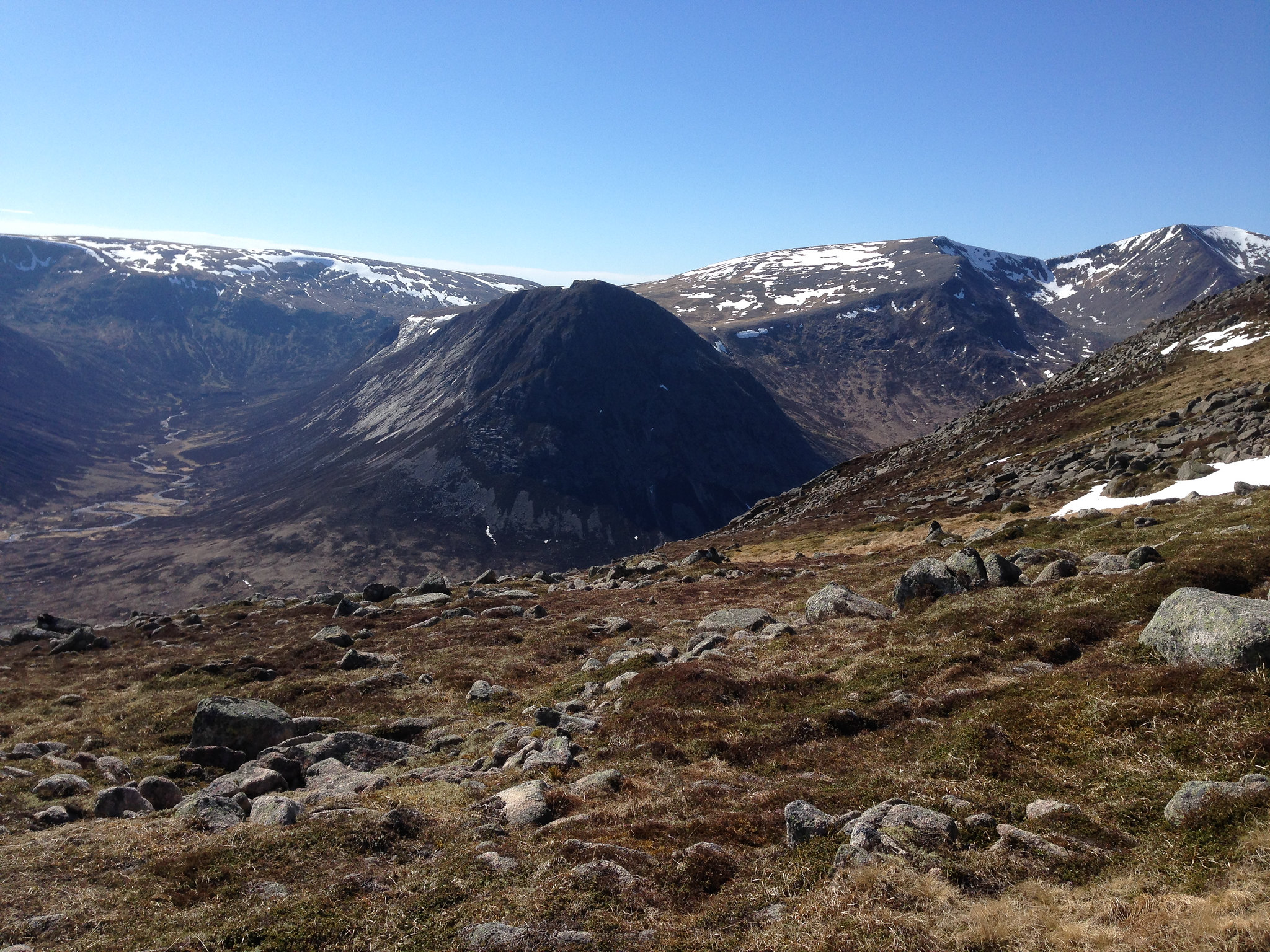 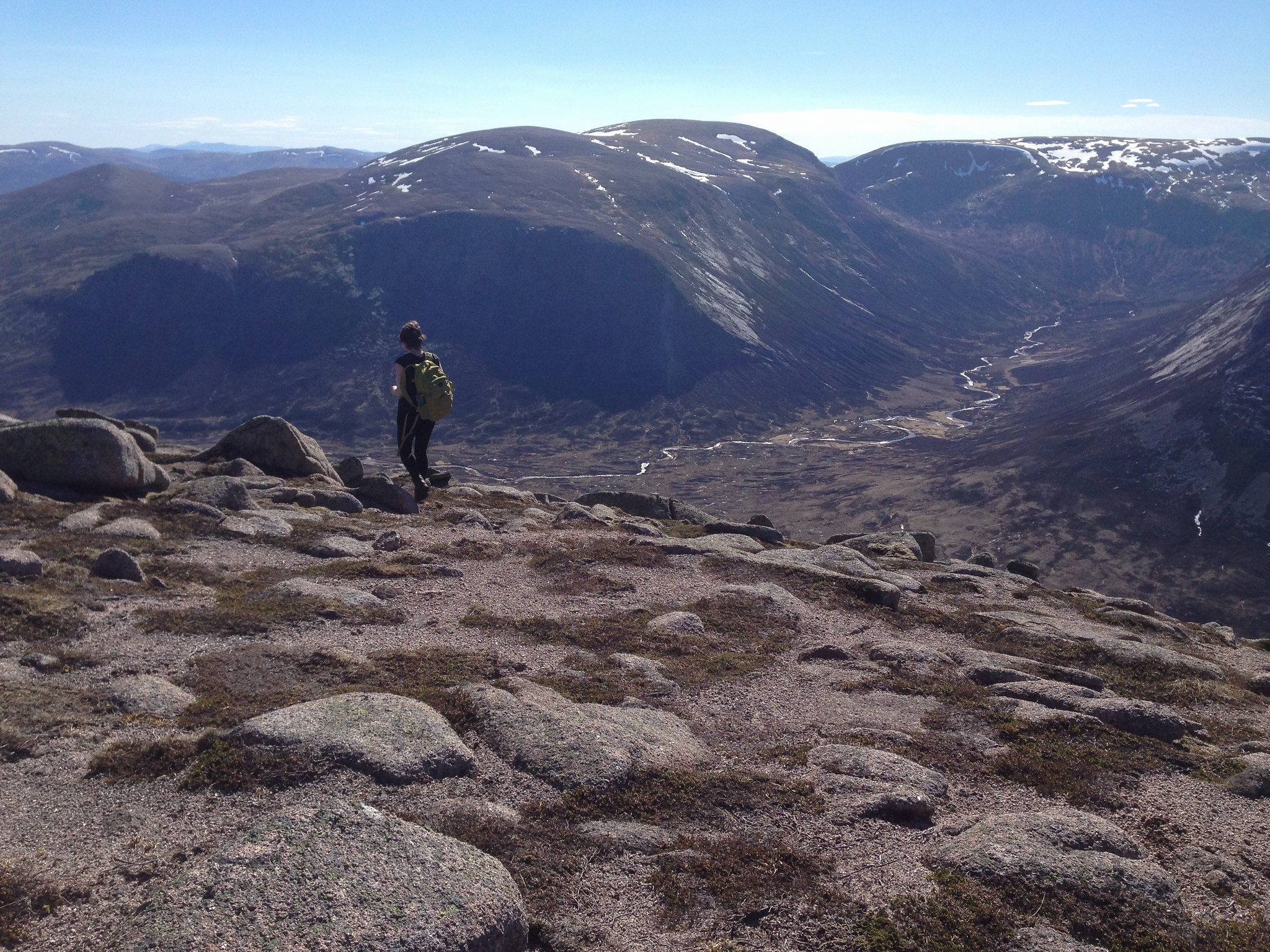 We had a good hour or so just enjoying the stillness and the view before we forced ourselves to make a move. We decided to continue along the ridge with thoughts of dropping down to the Allt Cam a' Mhaim and returning that way. In the end though my vertigo got the better of me and we decided to grit our teeth and turn back to walk the way we'd come. It's so frustrating to love mountains and yet have no head for heights. 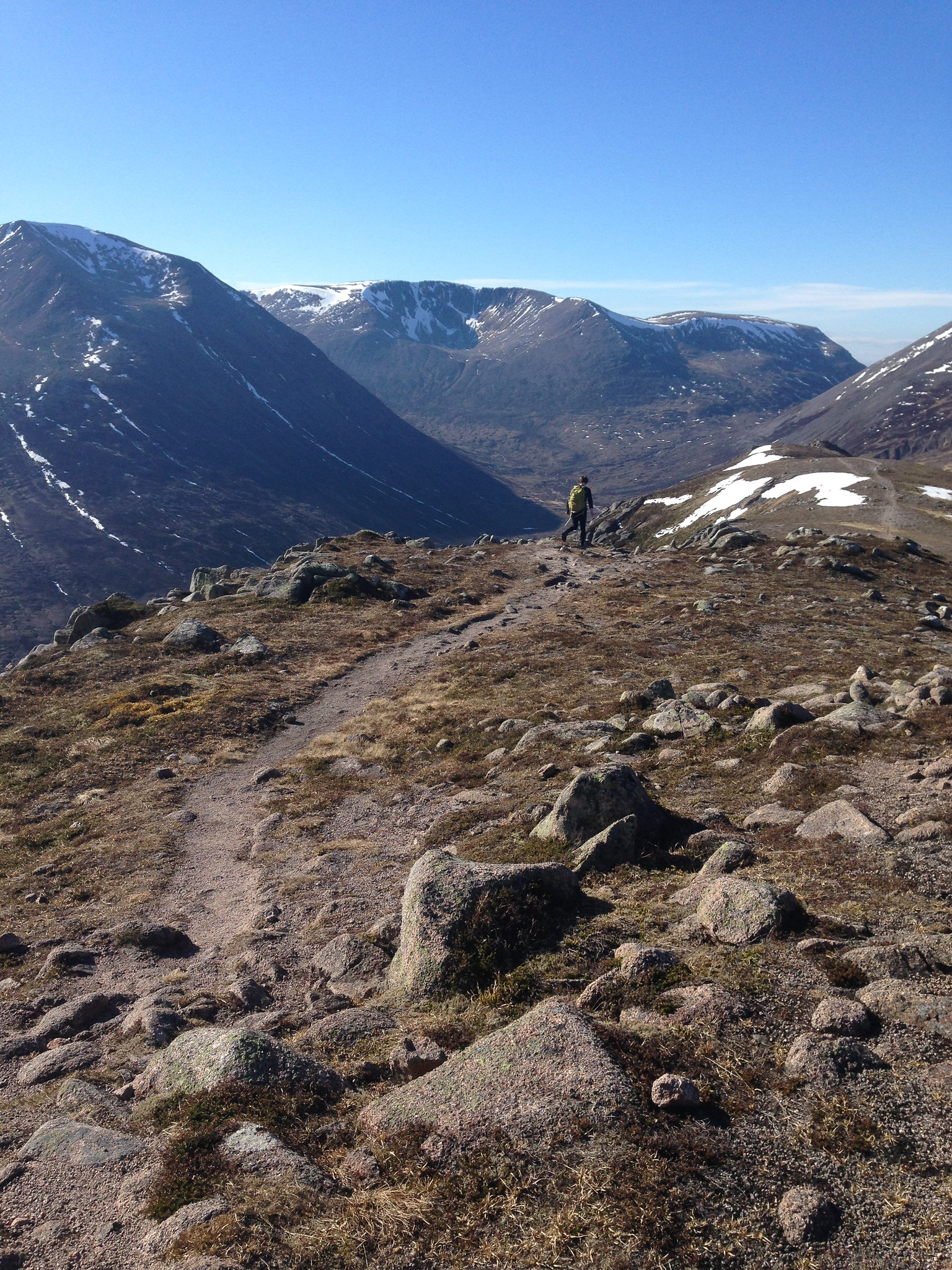 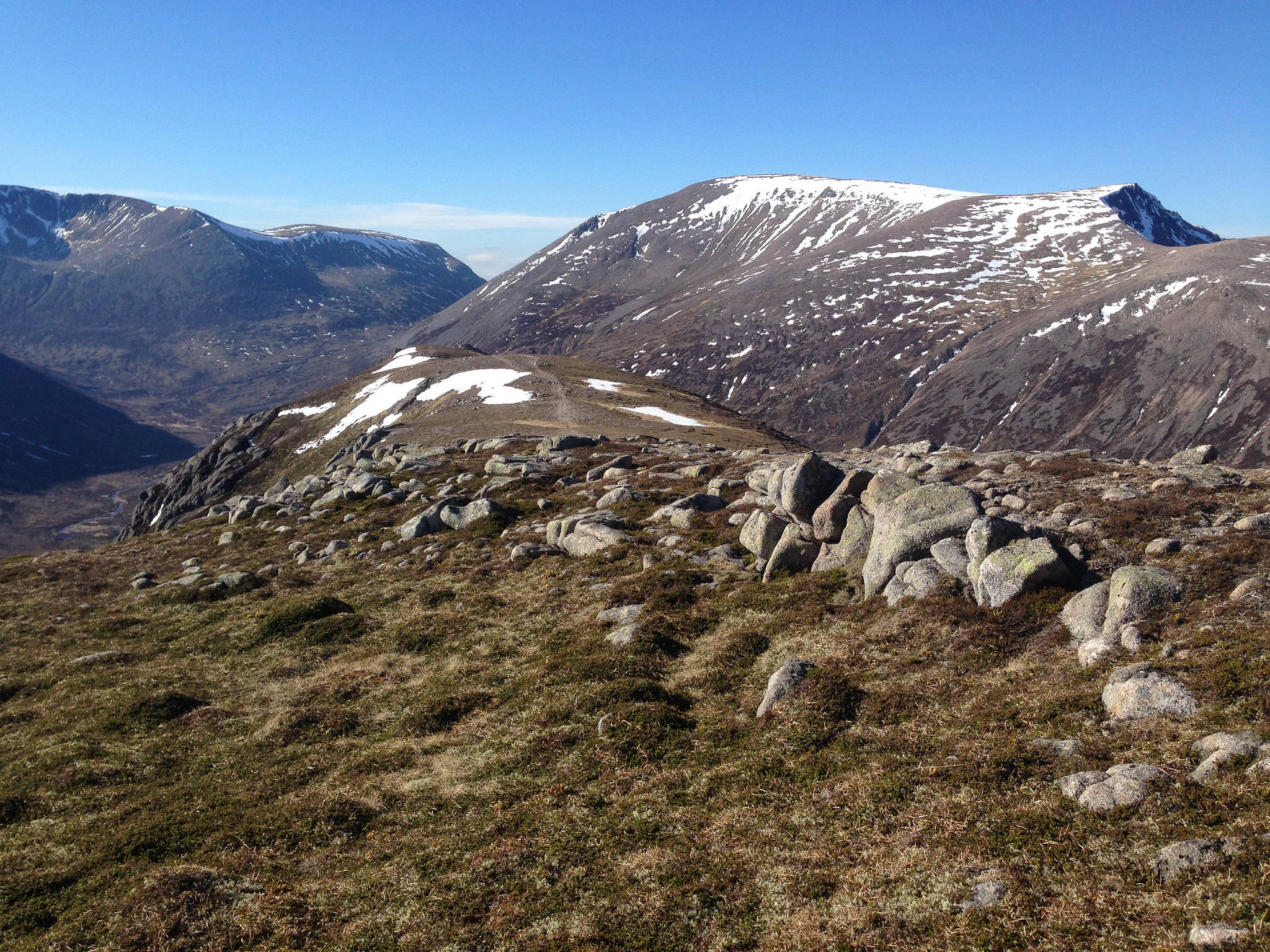 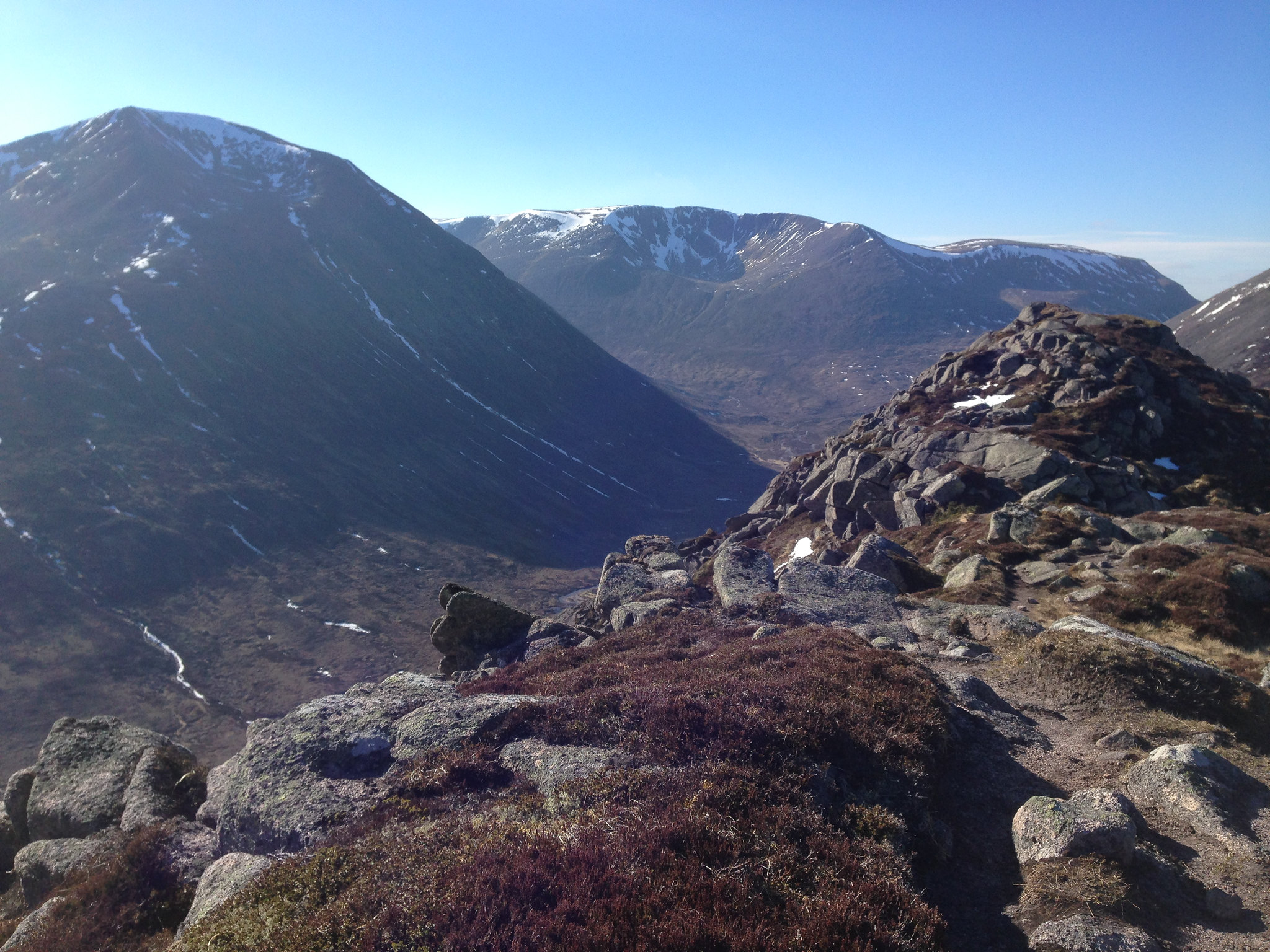 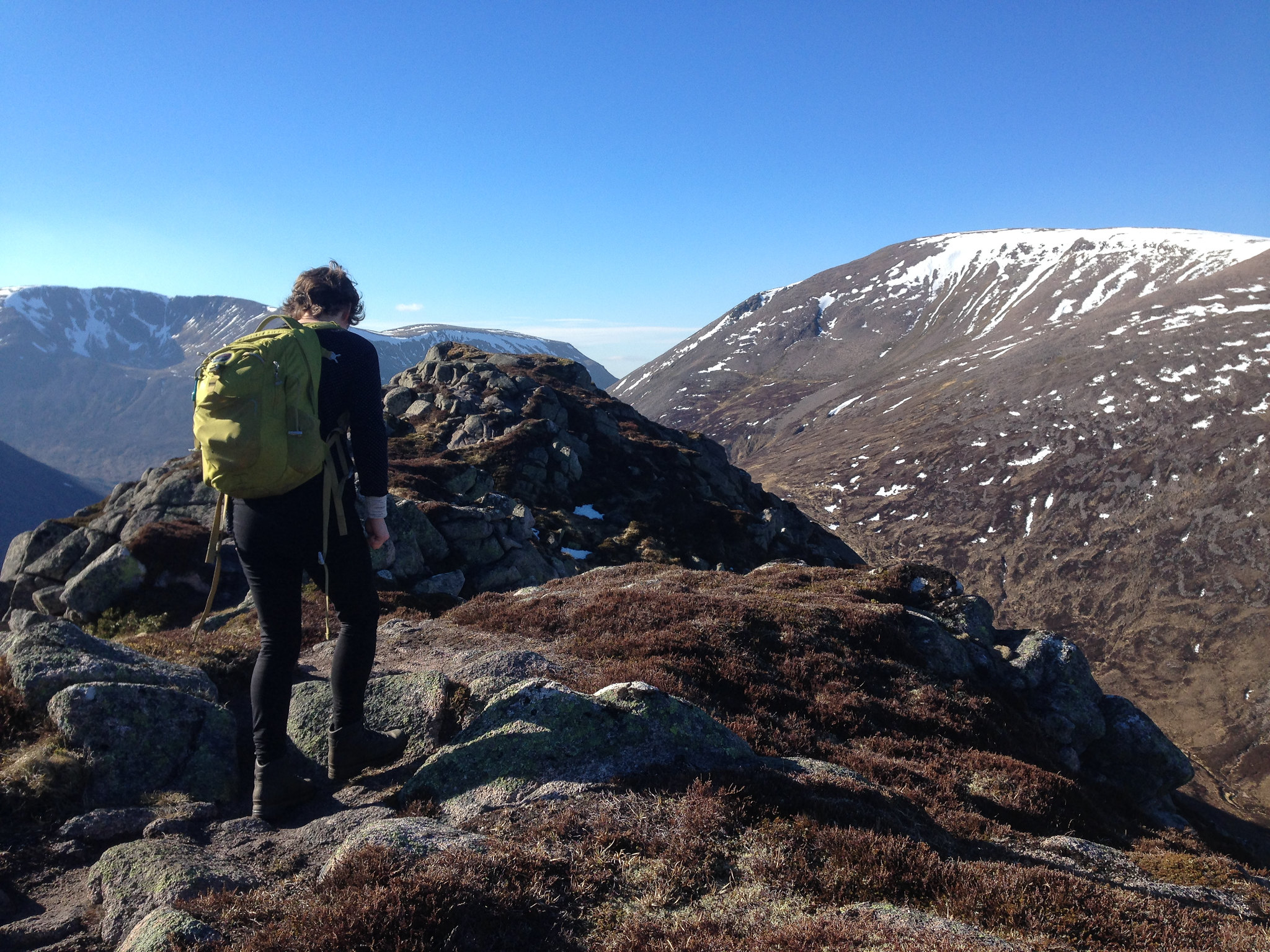 There was a bit of grumbling from both of us about having to go back up the hill to the summit, but we did enjoy our second stop at the summit before heading back down. 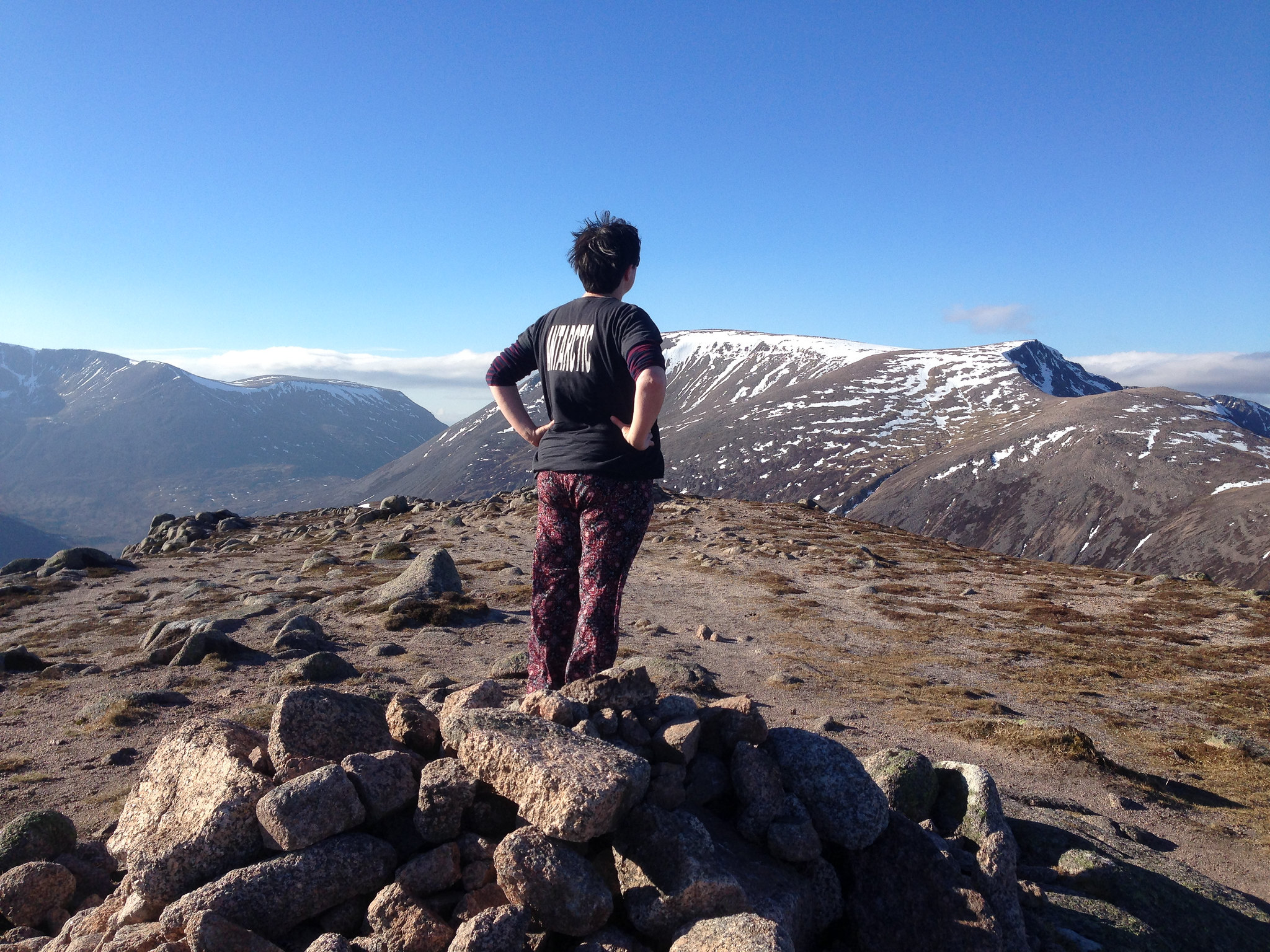 It's a funny thing how different a walk can look when you're going back on yourself. For all my loathing of taking an out and back route, it really did feel like we were on a totally different walk for most of the descent and we had to look at the GPS tracks to convince ourselves that we had ascended that way. Stepping down through the boulders was tough going on our tired knees and I wished I'd thought about bringing my walking poles, although I'm not really convinced they'd have helped much. 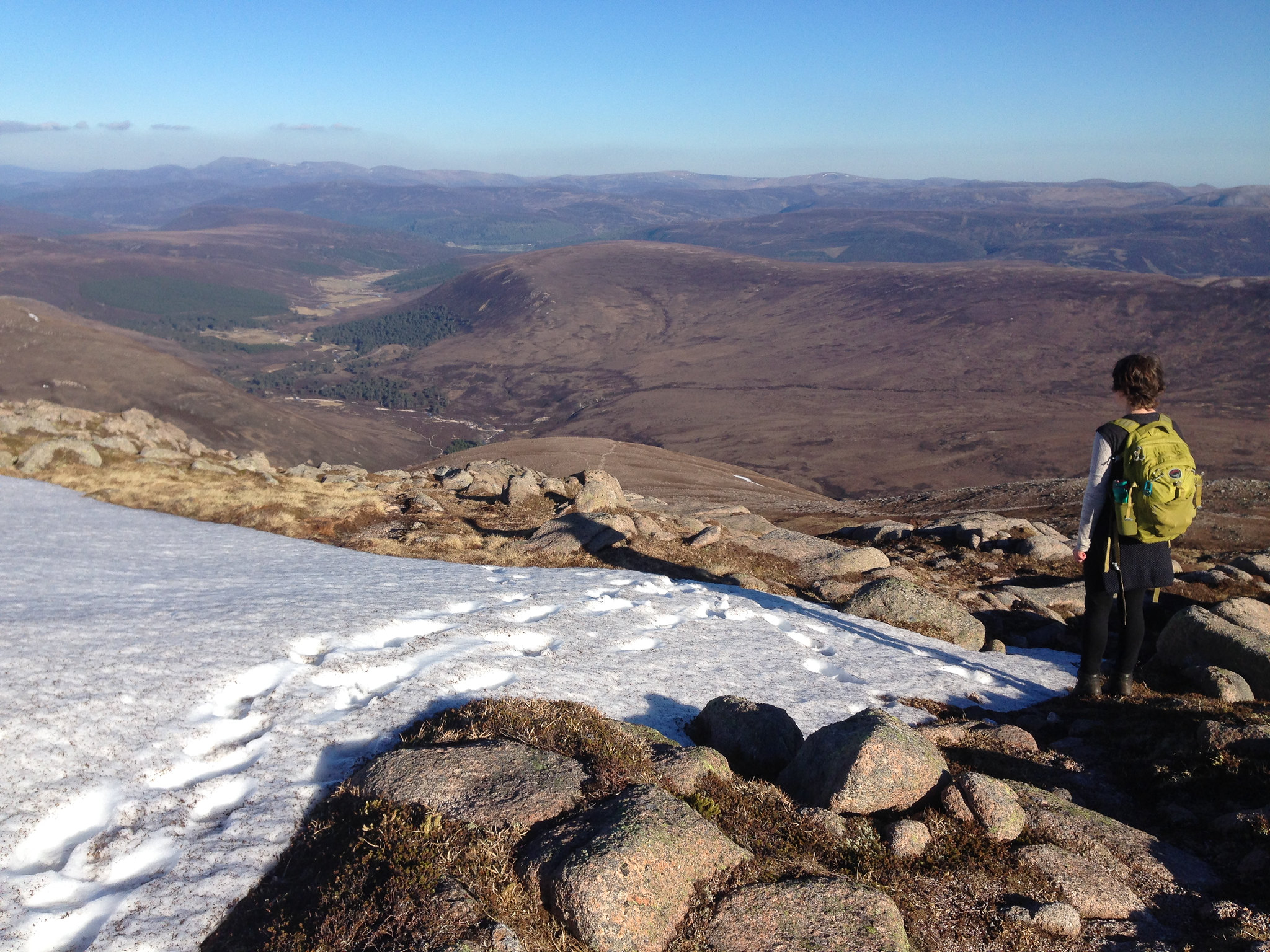 After being so hot all day we were getting a bit chilled now as most of our descent was in the shade. Once we finally reached a sunny patch we had a short stop on a rock to enjoy the two pieces of cake we'd picked up at the Braemar Bothy - one lemon, one ginger. Then it was plod, plod, plod and trying to keep our energy levels up. We both noted the path off to the left and ignored it for a few minutes until Jen spotted the Luibeg bridge and we realised we'd forgotten we needed to turn off. Funnily enough the idea of a dip in the deep pools wasn't so enticing at this stage!

Back through the woodlands and we found ourselves on a slightly different path and faced with bog. A bit of careful path finding and we headed towards the river and regained the more solid alternate path. Emerging from the woods, Derry Lodge was finally back in our sights, although again we did keep losing the path through the bogs. Drained as we were and dreaming of the car by this stage, we were a little bemused to meet someone striding off towards the hills with the most minimal of packs on his back. 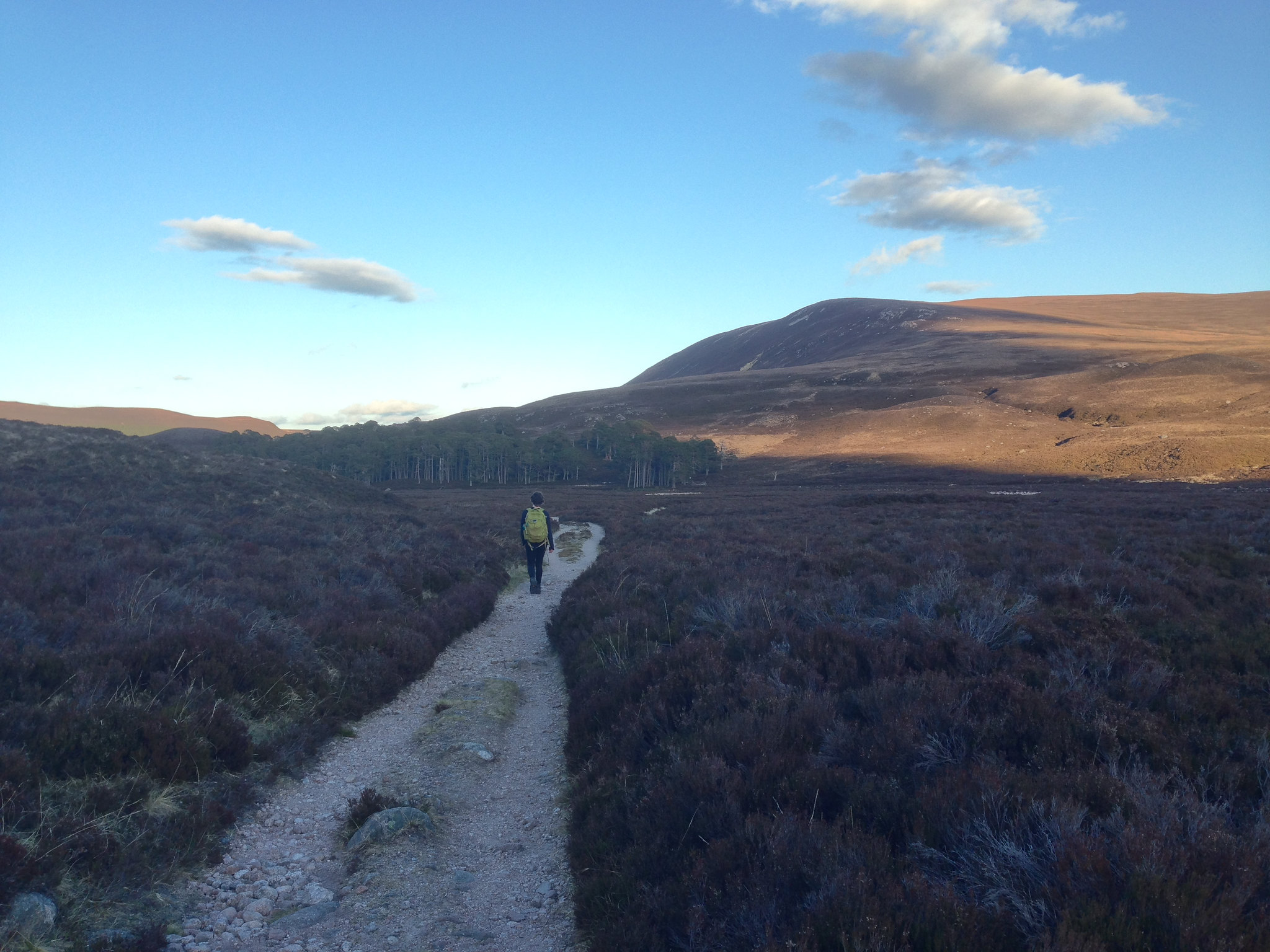 Just 5km to go once we reached the Derry Lodge, and we gave our legs a wee rest as we crossed over the footbridge! 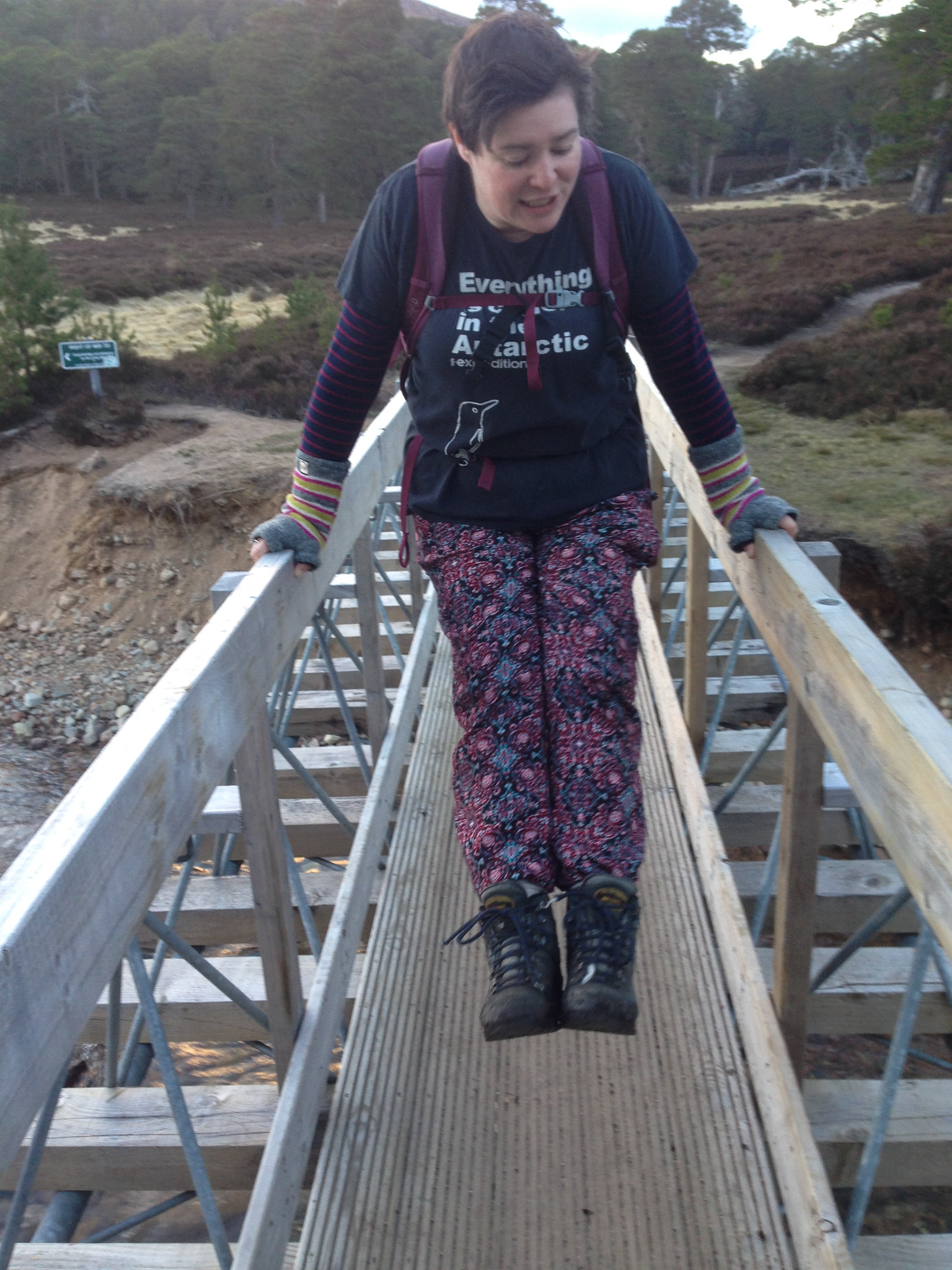 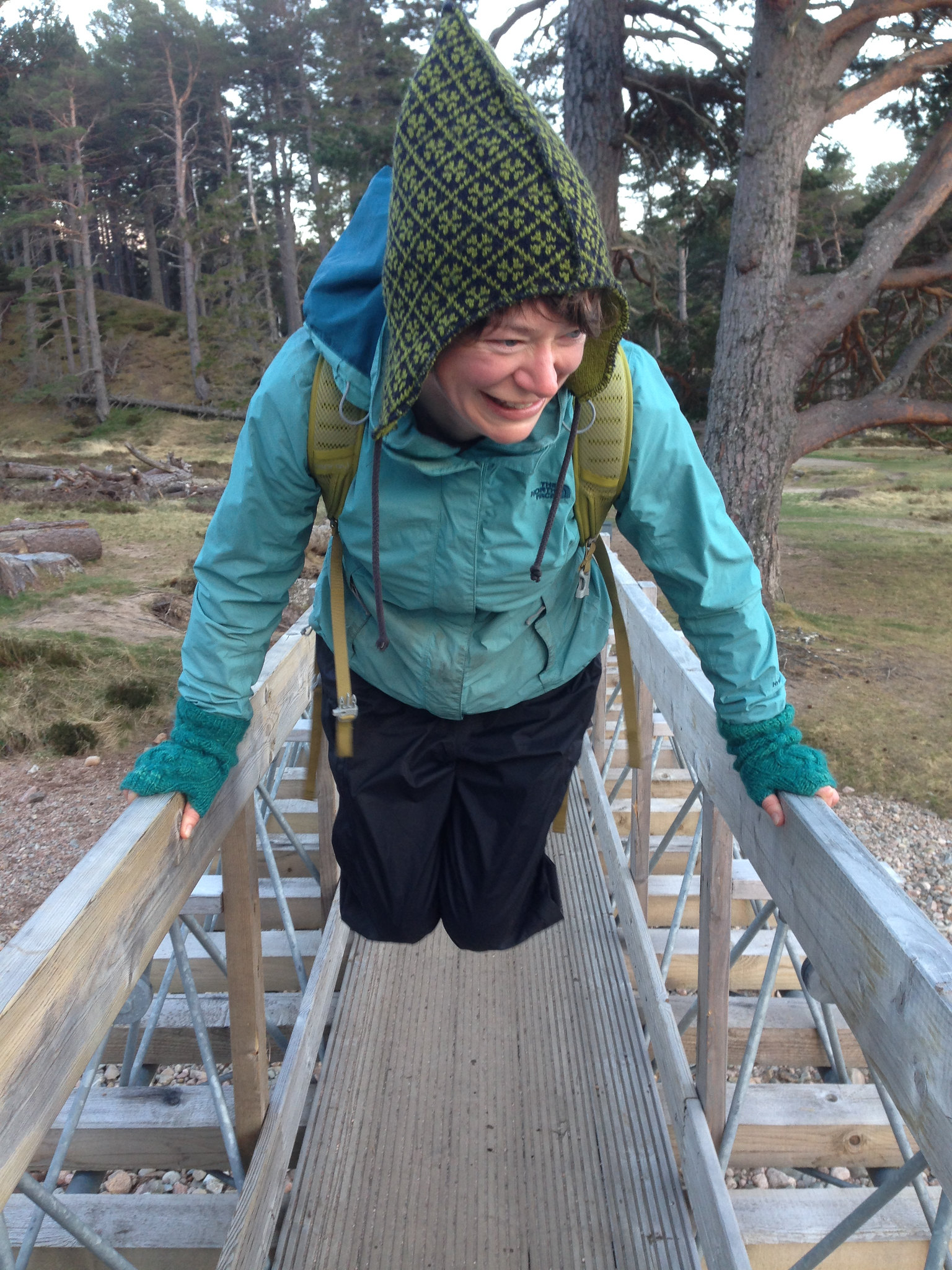 It was getting very dusky by now, but even though we were desperate to get back we couldn't help but be distracted by the cloud formations over the mountains and stopped for a few minutes to admire them. 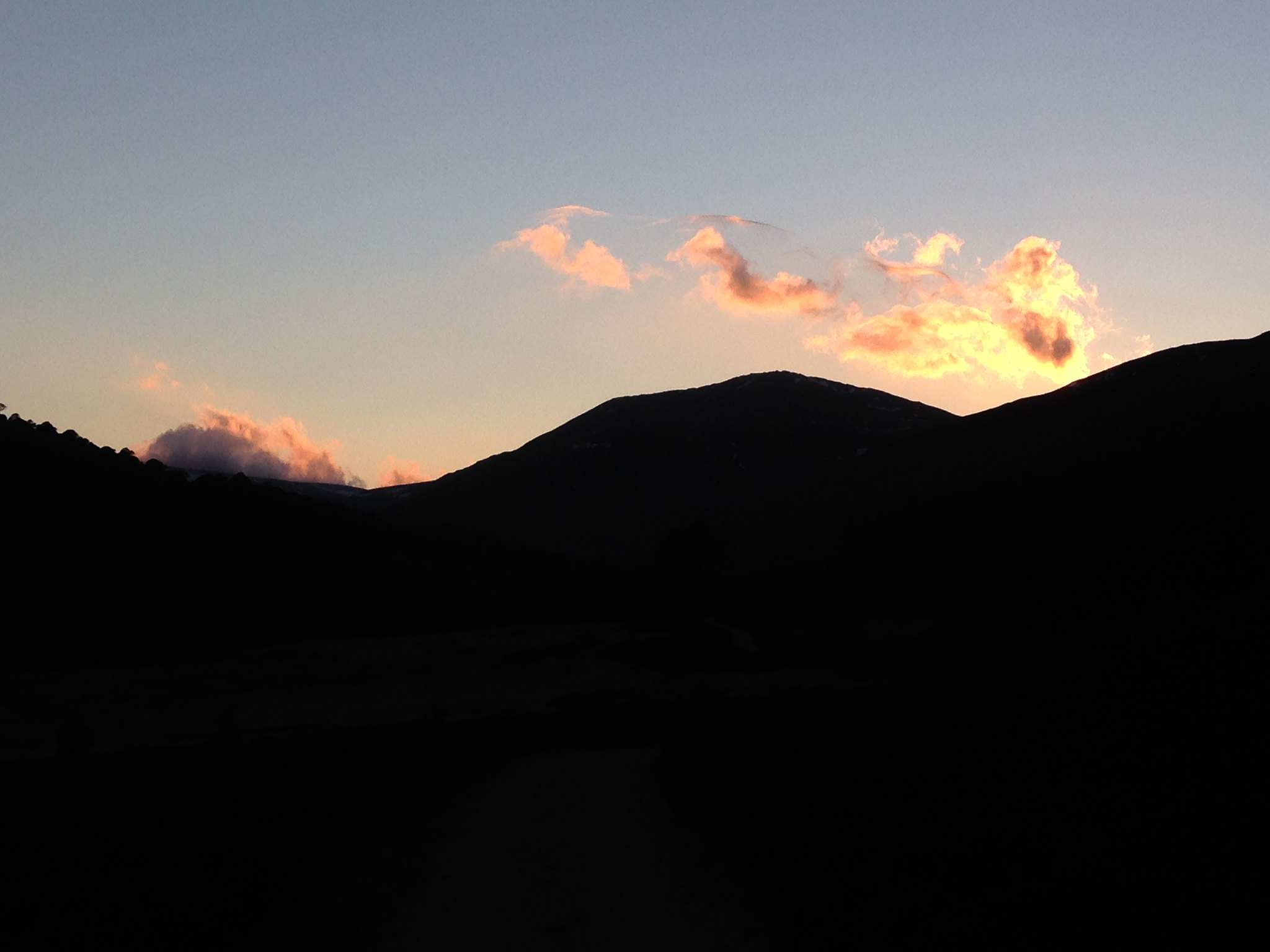 When we finally reached the bridge over the river I had no recollection of having crossed it earlier in the morning (although I have photographic evidence to prove I was there!). It's a good thing that there was a sign pointing us in the direction of the car park when the trail left the track because I think we could have easily kept on walking on autopilot by that stage. Just enough light to see by through the woods, so I never did get the head torch out, and we reached the car bang on 10pm. 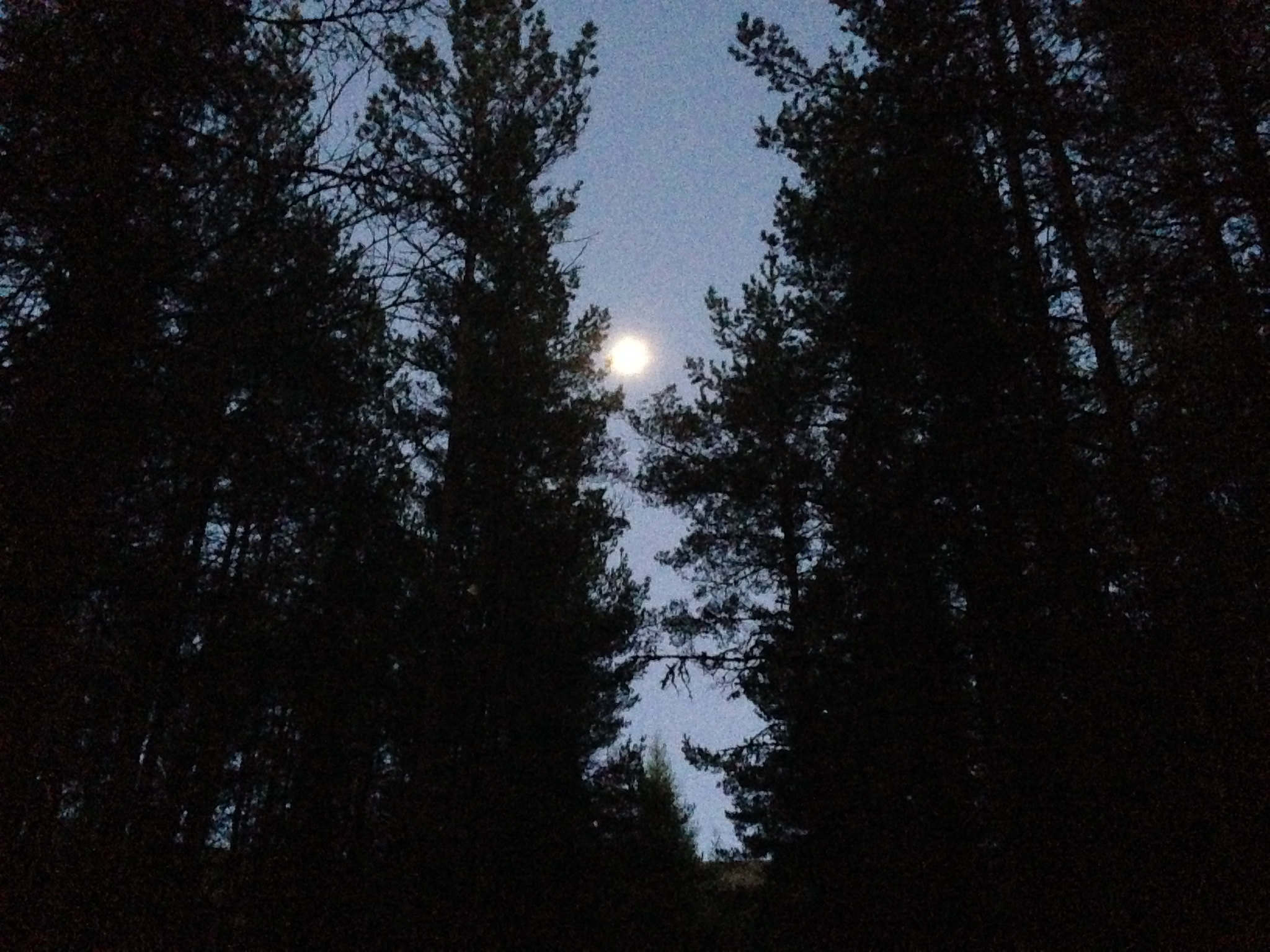 Leaving the Linn of Dee we were held up by a herd of deer crossing the road. Although we could have willed them to move rather faster it was a lovely end to a brilliant walk. The drive back to Dundee seemed to take forever though! 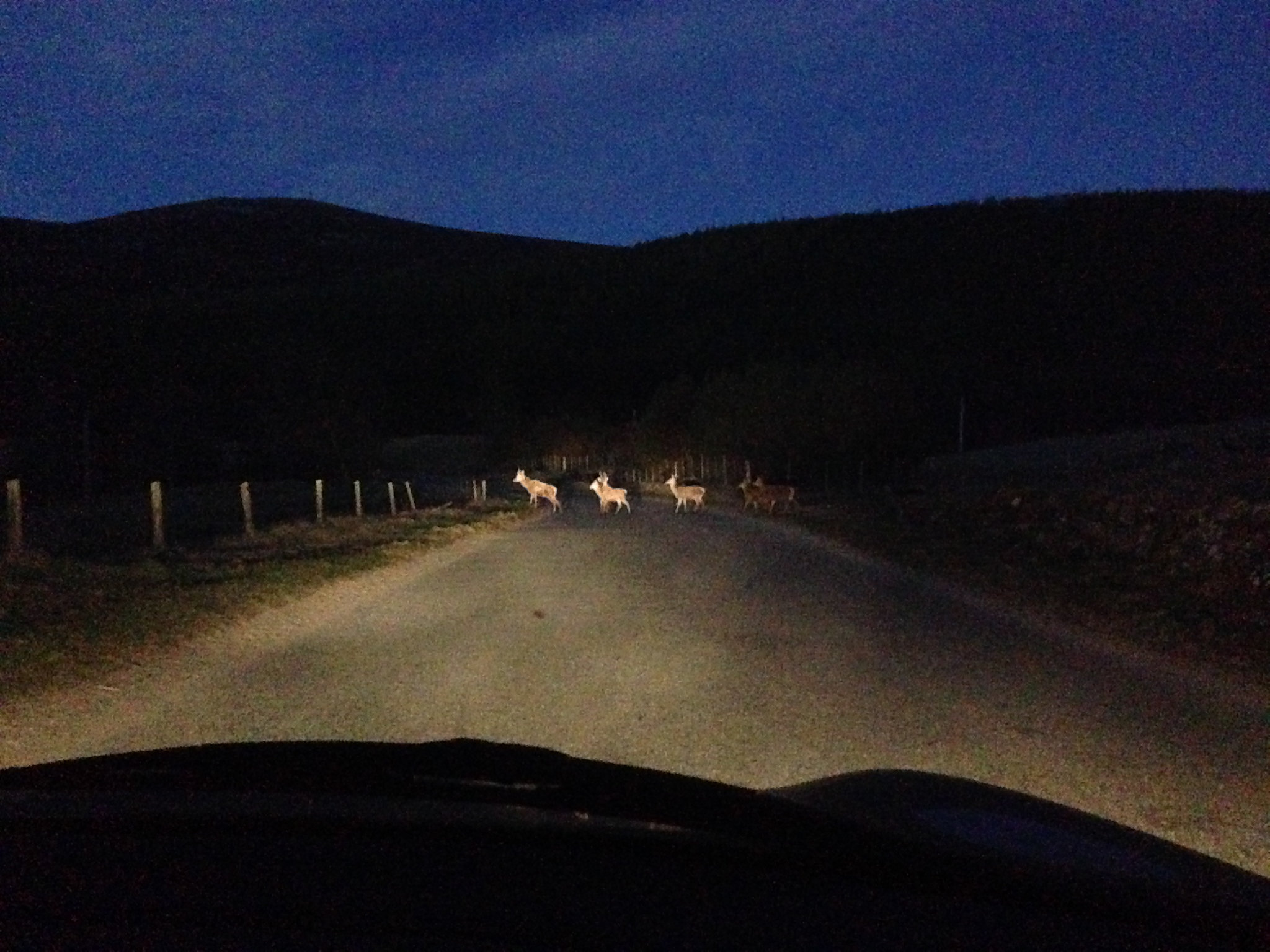 carn a'mhaim.gpx Open full screen  NB: Walkhighlands is not responsible for the accuracy of gpx files in users posts