In the past year we seem to have bailed out quite a lot. It started in the early May bank holiday when we had our "traditional" Munro-bagging weekend with Shish and Mother Goose and anyone else who wanted to come. (We've done it three times so it is a tradition now right!) We did two of the four Arrochar Alps but had to stop as two members of the party were unwell and one had a bad leg. Then we got blown off Mam Sodhail in July - literally - causing us to change its name to something a bit ruder. In December we missed out the two Munros East of the Drumochter pass when our good weather ran out, and in January did only two of the four we had planned in Glen Lochay - well because January is cold wet and windy and we wanted to be warm and dry.
Anyway, the May Bank holiday is once again upon us and I have a whole week and a bit off work! Unfortunately Shish is out of action with a broken leg and Mother Goose is in the throes of renovations of her house so it was just Rudolph and me who bravely set off to redress some of the imbalances.
It's a long way to Glen Affric from Yorkshire so we planned to include the Glen Strathfarrar Four in our expedition so as to make good use of the fuel. But first, on the way North we would pick off the two East Drumochter with a summit camp on Friday night. We were promised a quiet night and high cloud so that was good.
Here's the track of our route.

drumochter east.gpx Open full screen  NB: Walkhighlands is not responsible for the accuracy of gpx files in users posts
We set off from home at a sensible kind of time and were at Layby 87 on the northbound side of the A9 ready to set off at about 5pm. We had bikes with us which we were not taking up these hills but we stashed them a little way up the hill away from passing traffic and eventually I remembered to switch on the satnav to record our route.
The track is obvious and climbs at a steady and comfortable pace to the plateau and we took a little detour to the right to miss the final 20 metres of climb - no point climbing more than you have to. A'Mharchonaich across the Drumochter pass from near the start Looking back to Dalwhinnie and the Monadh Liath This sheep is Monarch of the Glen here snow melted most places but hiding in the track 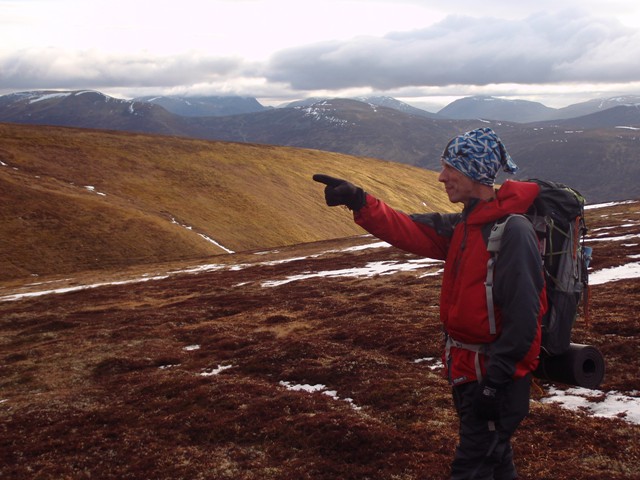 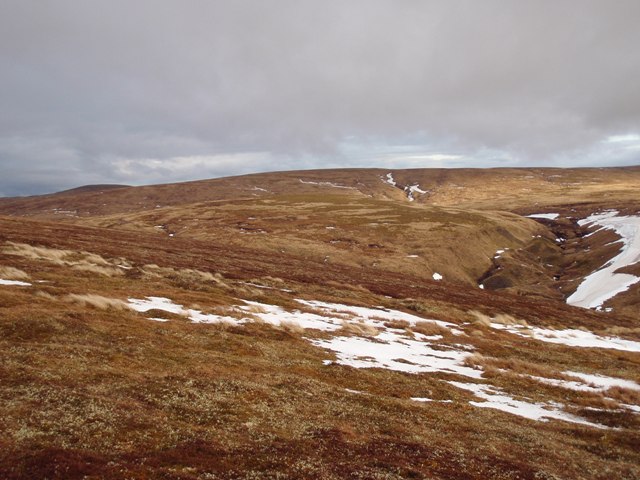 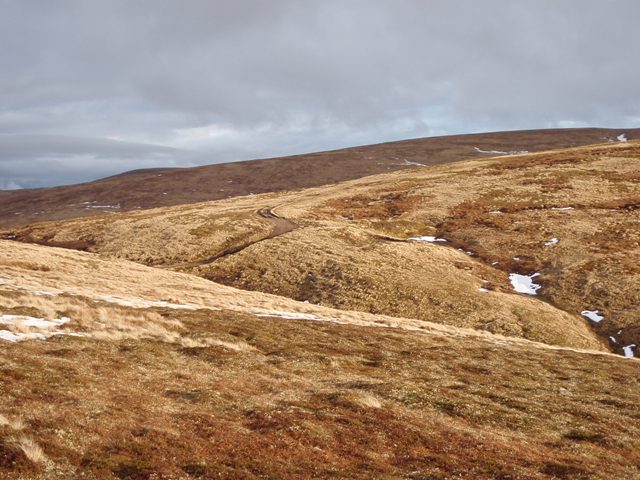 back to the track after skirting the last little ascent some snow left in sheltered spots, but nothing you have to walk in

We were aware that we had to take a left off A'Bhuidheanach to avoid a steep descent, and when we came to this cairn we marvelled at its amazingness, took photos, recorded birdsong and missed the turn completely. lovely views of distant hills we haven't climbed yet

It didn't really matter though as we could see perfectly well where we were going so after remarking that the track went right when we wanted to go left, we descended down steep grass to the bealach at 830m.
We then set off on a bearing up the slope with some interesting and heated discussion about the correct way to go - as it turned out Rudolph was not wearing his glasses and was aiming for a different summit to me. In any case that ensured we found the bealach between the two tops of A'Bhuidheanach Beag where we decided on a nice sheltered camp spot and dumped the bags before ascending each top in turn. We decided the one with the trig point is the higher but we have been to both just in case somebody decides it is important. somewhere around the unmarked summit. it is quite flat on top so it is around here somewhere me on the top. This summit gives a splendid feeling of isolation.

We brought our lightweight summer tent (mesh inner) and the wind decided to get up rather coldly so it was a draughty and chilly night. That was not what we had ordered, and neither was the cloud shrouding the plateau in the morning. It really wasn't warm enough to hang about so we packed up quick and headed off to Carn na Caim. Once back at the bealach at 830m there is a nice track to follow most of the way, and then a line of fence posts, so despite the cold wind and mist there was no real navigational difficulty. We found the track up A'Bhuidheanach without difficulty and were interested to see how we could have missed it the night before!!! 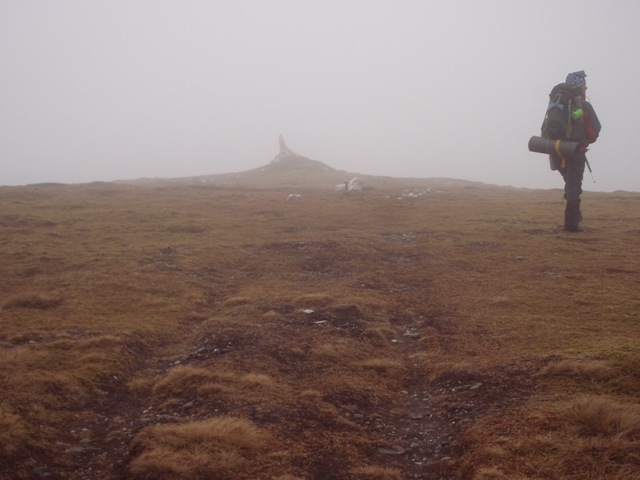 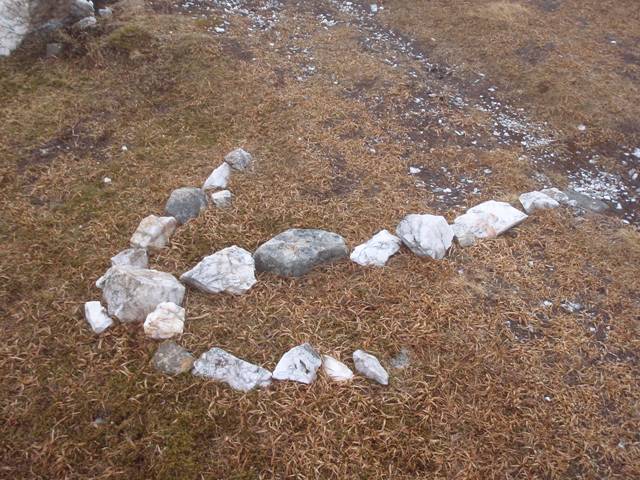 snow in the track again, but not all the way.

We met a couple coming off the top of Carn na Caim as we arrived and another few people heading up as we were coming down. 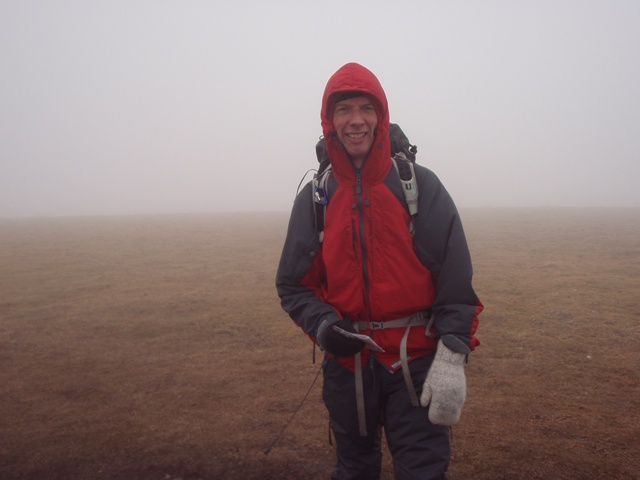 Rudolph on carn na Caim, though it could be anywhere! 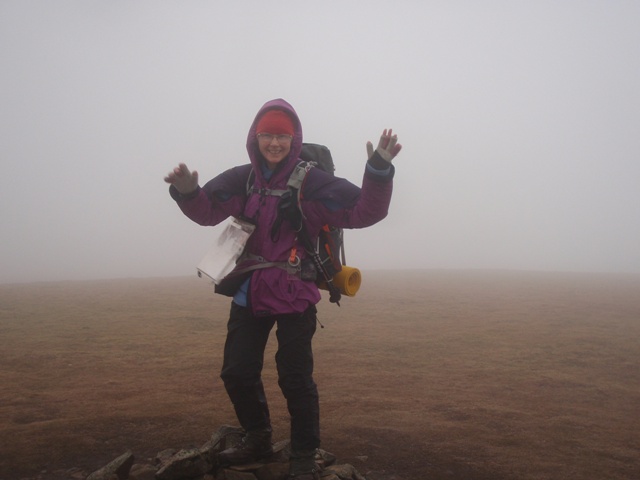 And me. The cairn is small. But at least it is in the picture! 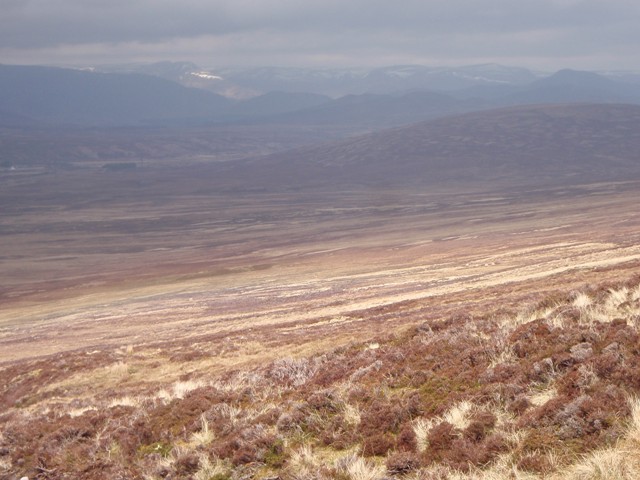 Once off the plateau we quickly came out of the mist and the sun even came out as we approached the bottom of the hill; we were back to the car before 1pm ready for the next part of our adventure, which was finding Tiso's in Inverness so that Rudolph could replace a missing glove (it turned up later in my sleeping bag). And from then to the Co-op in Muir of Ord and to the Glen Strathfarrar gate