I usually only post walk reports on Walkhighlands when I've been using one of their published walks. But we've been up a couple of hills recently by less-frequented routes which have been interesting enough that I thought I'd post them here. Dumyat's the first one: a characterful little hill but usually climbed by a fairly uninspiring-looking path along the top of the broad ridge from the west. The ascent we used started from Blairlogie on WH's second suggested ascent route, but branched off to traverse the steep south face on a wonderful little path sandwiched between cliffs above and below. We returned via Dumyat Farm to the south-east to make a circular route.


Dumyat.gpx Open full screen  NB: Walkhighlands is not responsible for the accuracy of gpx files in users posts

The car park's signposted off the A91 just east of Blairlogie. Head up the steps (or unnecessarily long disabled access ramp to the side) to a gate giving access to the main east-west footpath which is part of the Hillfoots Diamond Jubilee Way, and turn left. The wide path soon reaches the outskirts of beautiful Blairlogie at a gate. 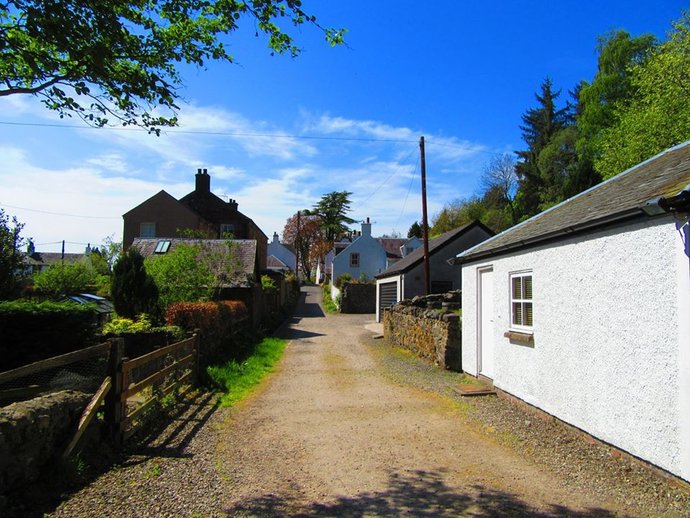 Don't go through the gate; instead, take the much narrower path up to the right behind the houses, still as WH's "Dumyat from Blairlogie" route. The path is rough, rocky and occasionally steep, but through beautiful woodland, ferns and gorge (apparently it can get a bit overgrown late in summer, but it was perfectly clear today). 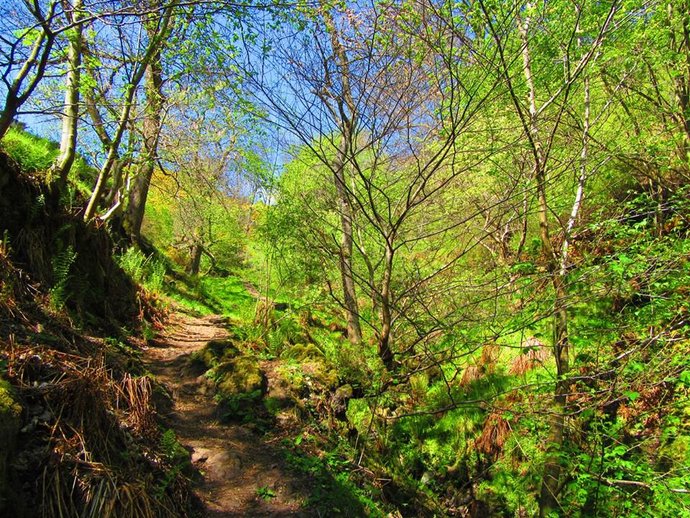 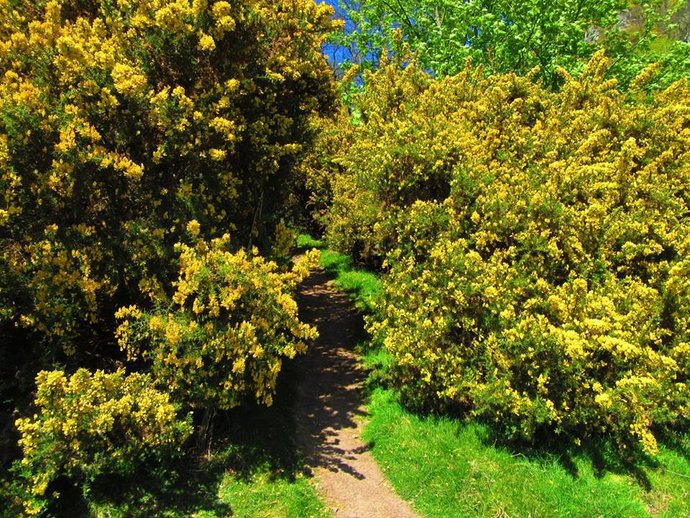 Above (most) of the gorse, keeping to the left of the burn - no bog today, but this short section might be soggy after rain. 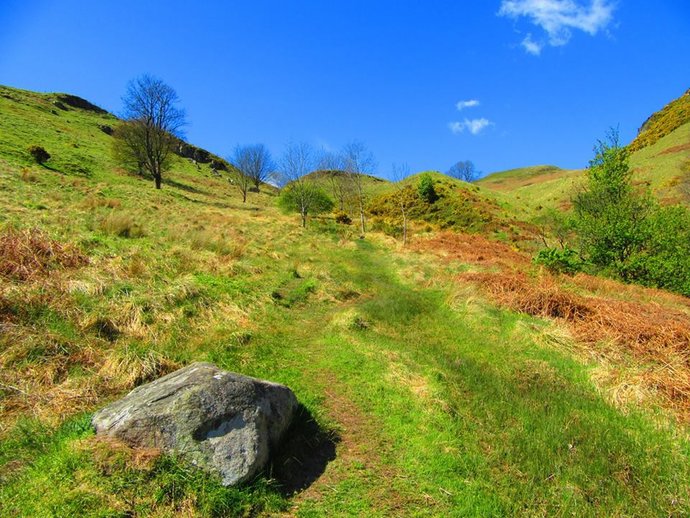 The path crosses the main burn and runs right across the hill towards one of the little tributary valleys. The start of the traverse path can be seen in the background, in between the foreground path and tree. 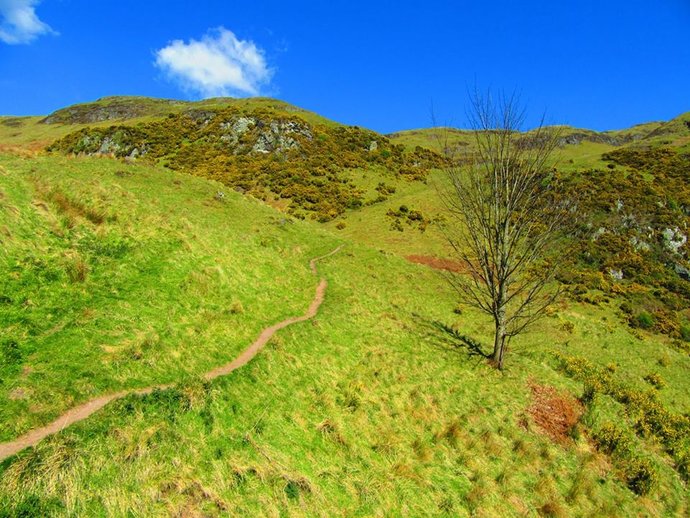 The next photo is taken looking up the tributary valley. Immediately after the path crosses this burn (pretty much at its source), the path splits. Left is the WH route to the summit, joining the tourist path further up. We headed right: if anything, this path is actually the clearer of the two. 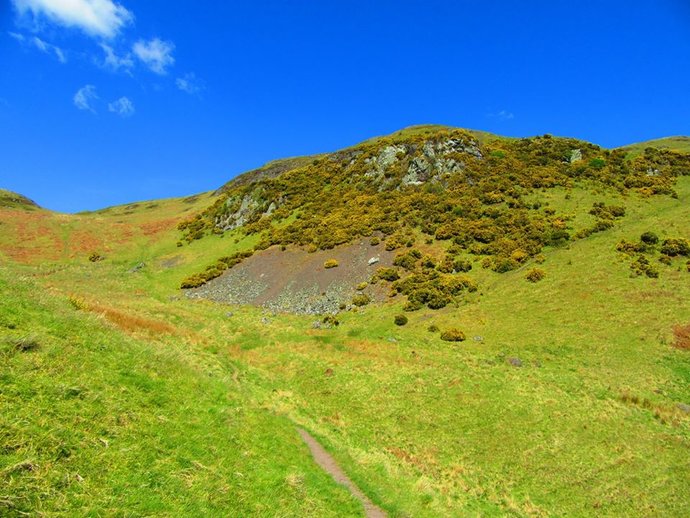 The path continues to be delightful - slowly ascending, clear on the ground, with beautiful scenery and never really boggy at all. It crosses a couple of small gorges with a few rocky steps where just the odd hand may be needed. 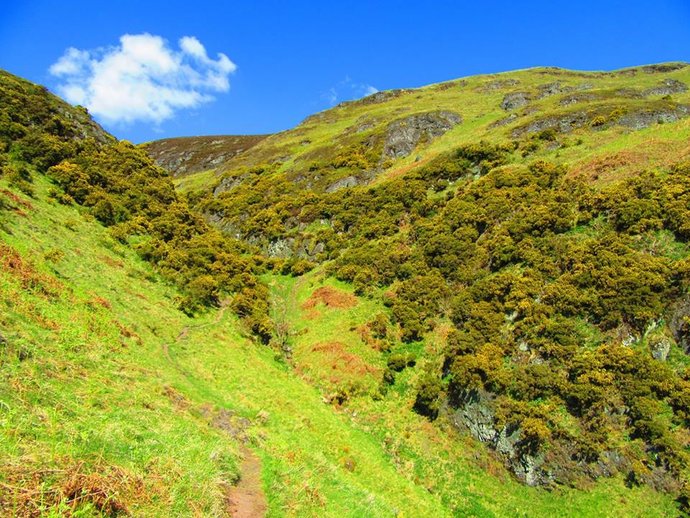 Looking back, over the fields to Stirling and the Wallace Monument. In the foreground you can see an earlier section of the path traversing the slopes on the other side of a gorge. 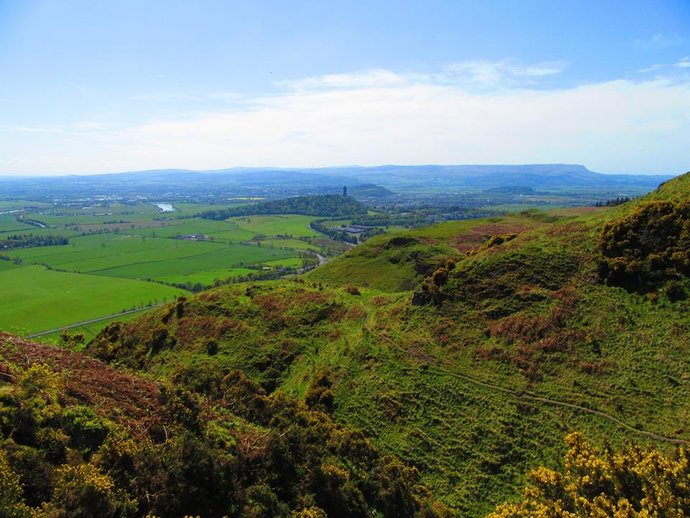 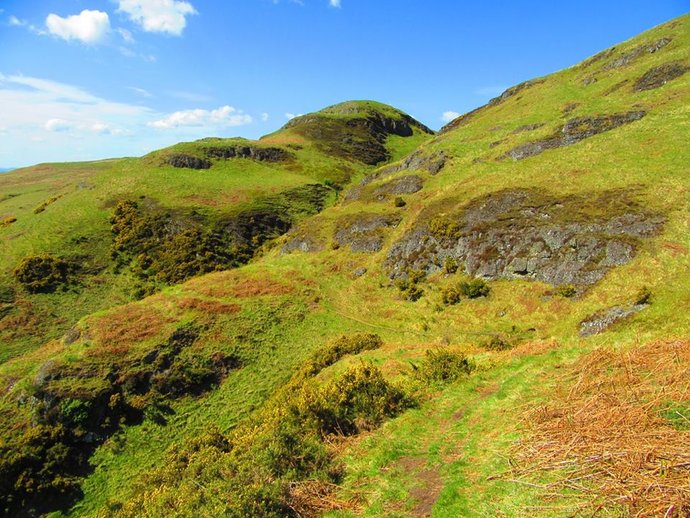 At times there are steep drops on the right, all the way down to the Hillfoot road, farms and villages. 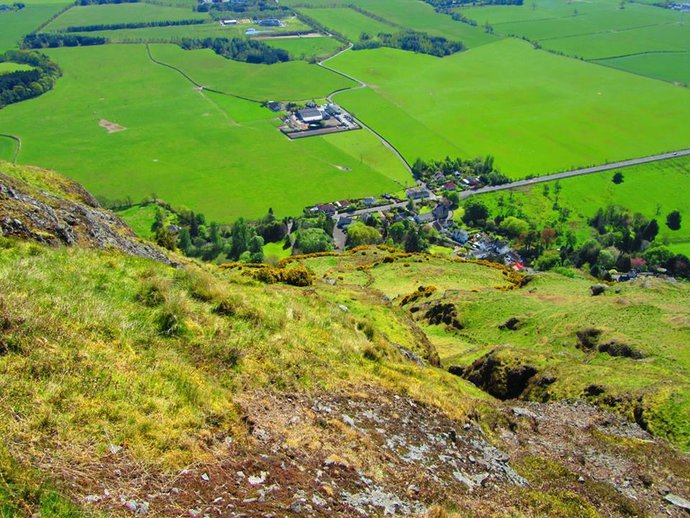 Despite this, the path's never really that exposed. Occasionally the grass is interrupted by short rockbands. These are usually at a gentle gradient - none of this route could be described as a "scramble" - but care required if the rock was wet, just because of the drops in the vicinity. 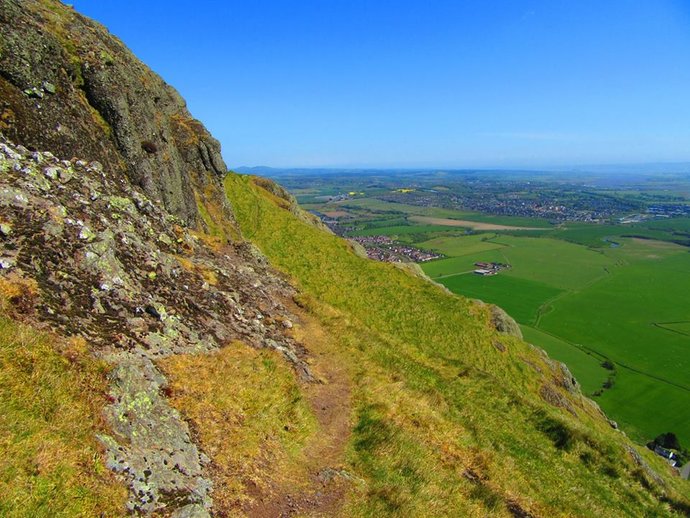 What a wonderful path! The rock band in the middle is much easier to cross than it looks here. And the views... 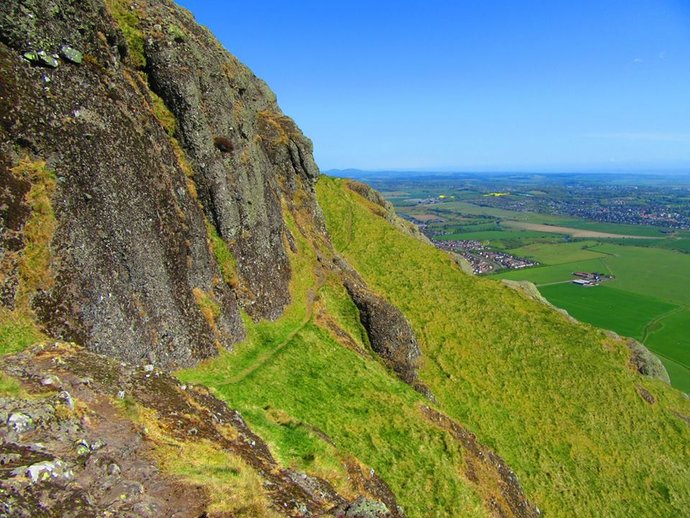 Looking back across a rocky bit: 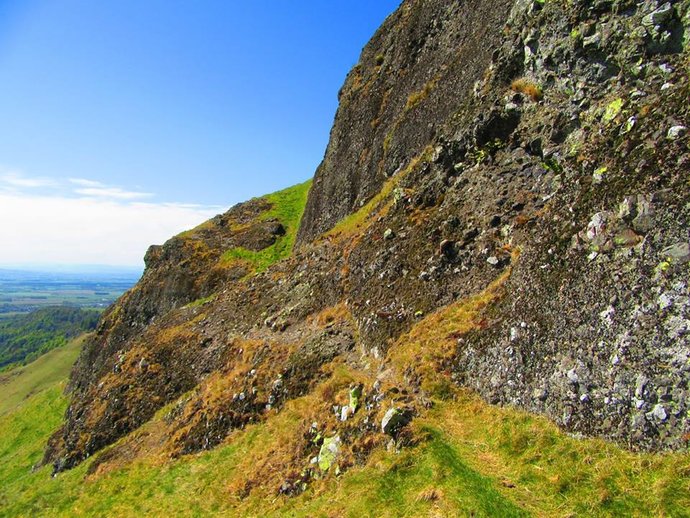 Grassier section ahead, with large cliffs above and below, and Menstrie at the foot of them. 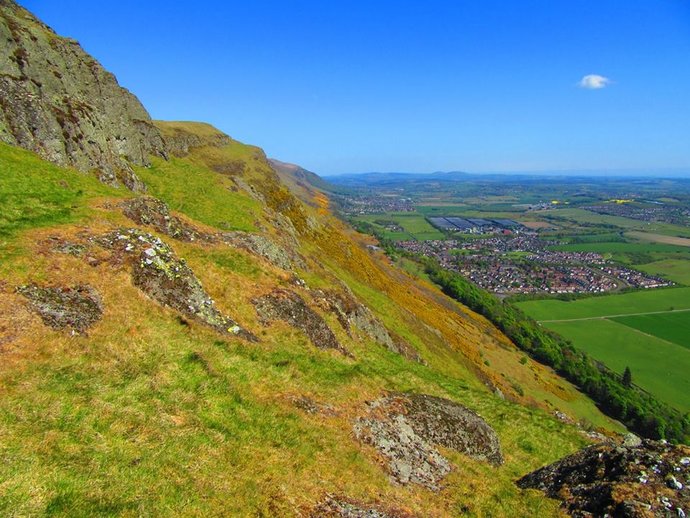 View back along the path: There's one final rocky section where the path appears to drop off the edge into Burnwarroch (also called Warlock Glen, I think). Instead it bends left out of sight, traversing high above the path coming up the glen, far below. Dumyat's summit is finally visible on the other side of the glen. 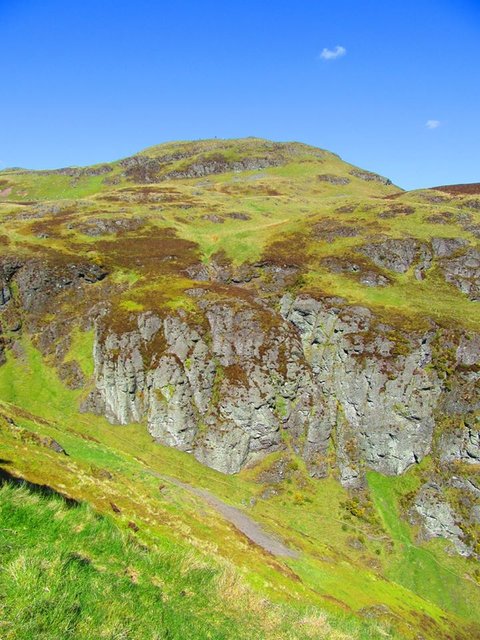 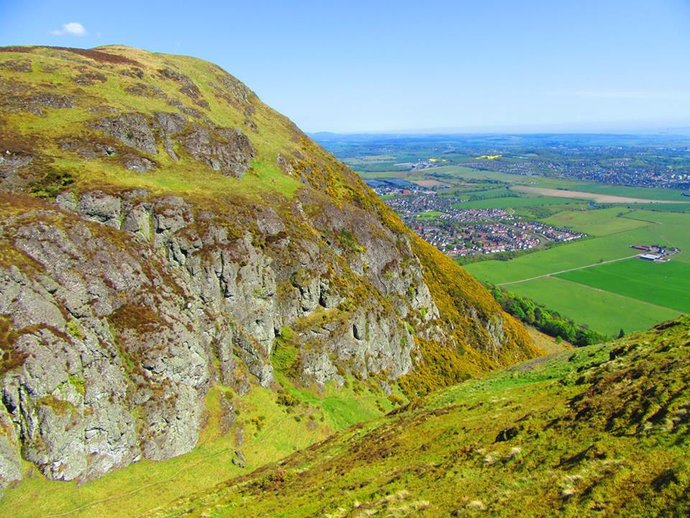 Burnwarroch comes up to meet us. From here you can pick your way to the summit by a choice of routes: head NNW up the glen to meet the tourist path, ascend NW to pick up the tourist path just before the summit, or descend Burnwarroch very briefly before a path leads up to the left. Of these routes, the first gets a bit boggy and the last crosses some very steep ground, so the middle option is probably the best one. In any case it's less than 10 minutes to the summit of Dumyat - after passing no-one on the climb up, it was suddenly very busy despite what the photos suggest! 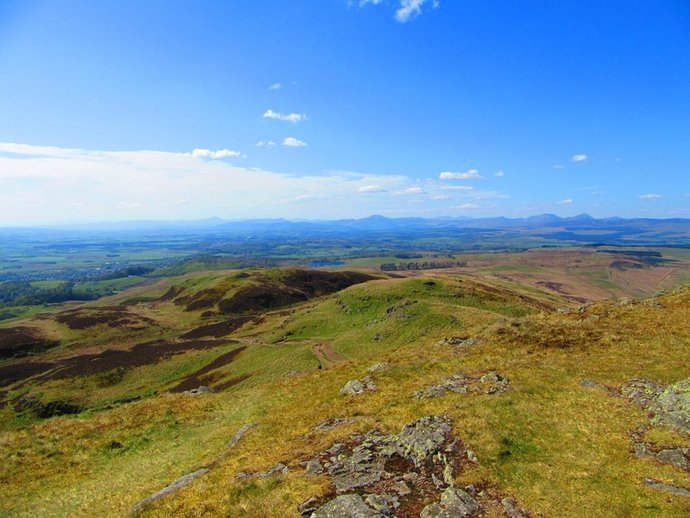 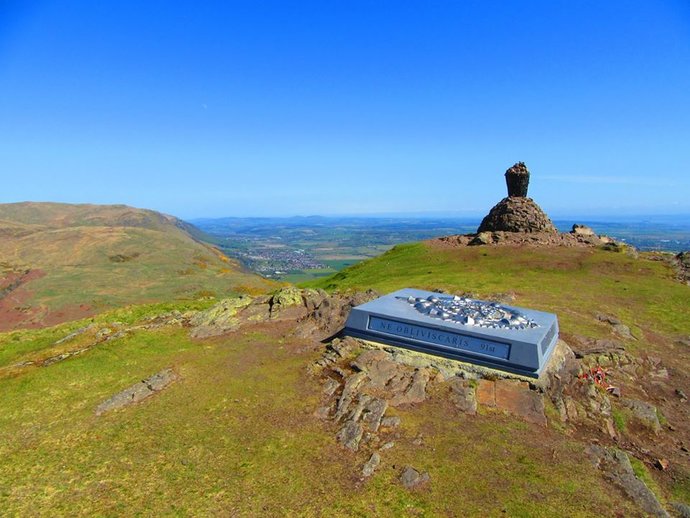 Heading down via Dumyat Farm is less dramatic but still pleasant. A clear path descends east towards a distant Menstrie Burn. 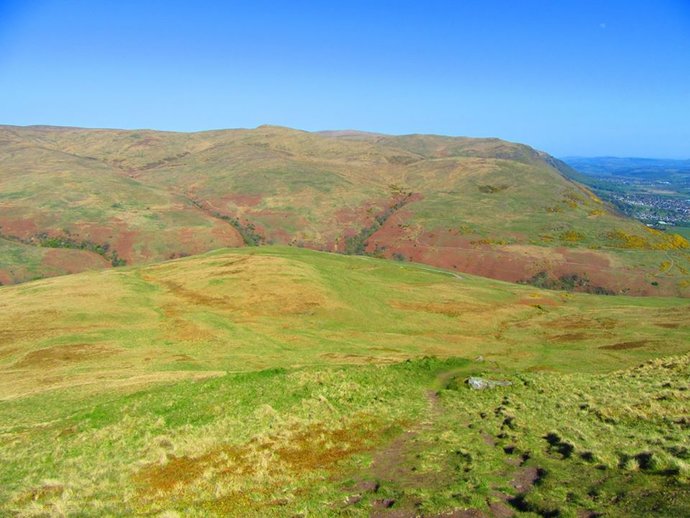 This path forks a few times and a grassy track adds to the confusion. Eventually all the downhill paths are "caught" by the main track along the bottom of the valley - we generally kept right at all the junctions, staying high so as to stay on paths as long as possible rather than the track. Eventually we joined it by a covered reservoir or similar.

The track soon descends to Dumyat Farm. Just before it, a new section of the Jubilee Way branches off right, running parallel to the track at a higher level, missing out the farm and several houses. 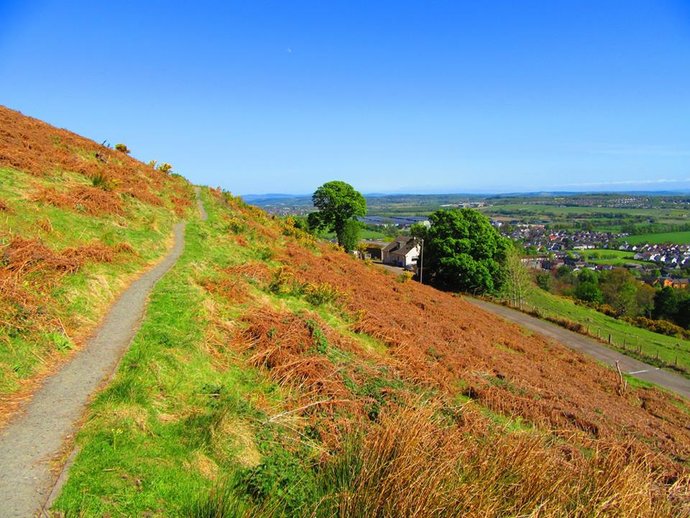 The path rejoins the track after the houses - follow the track with good views of Dumyat's crags up to the right. Where the track descends into trees, the Jubilee Way branches off right again - follow this as it undulates through woodland and gorse back to the gate above the car park. I have to confess I've never climbed Dumyat by the main path before, but I doubt it's as interesting or beautiful as this route. Personally it was one of the best hill walks I've ever done anywhere in the Lowlands - and at under 4 miles, pretty short too! But perhaps don't recommend it to too many people - wouldn't want the crowds spoiling it

It looks very pretty in the sunshine - I had a slightly traumatic experience of losing the path while descending to Blairlogie, in the pouring rain late on a November afternoon, so didn't really appreciate it properly! The main path was pleasant enough too, though.

You're right, that's a lovely, enticing, looking path. It just goes to show that even the smaller hills are very special if you spend time to explore them.