One of those grand mountain days that will live in the memory as long as my deteriorating faculties permit .... Having done Goat Fell and Caisteal Abhail in the previous two days as singles, I decided to go for the WH route up these remaining two Arran Corbetts. In true fashion I added my own embelishments (ahem!) to the written route through a combination of free-spiritedness and can't-be-bothered-to-check-the-map-edness.
As another variation, I set off from the car park at Arran Brewery at Cladach, hoping I may get a further supply of local produce upon my return. This adds another couple of kms to the route, but provides a gentle and shady introduction to the day wandering through the woods until arriving on open ground on the opposite side of the burn from the camp site. 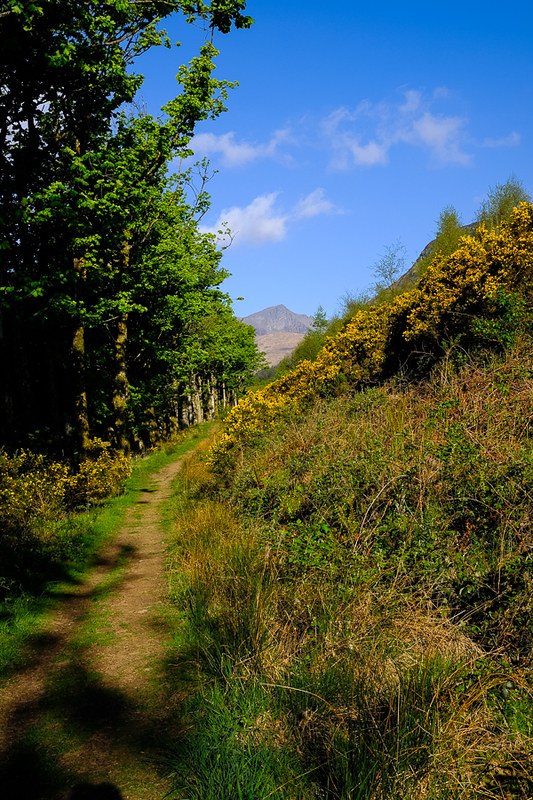 The day was bright and sunny, in typical Scottish fashion, and on good paths Glen Rosa "proper" was reached swiftly (by my standards at least). 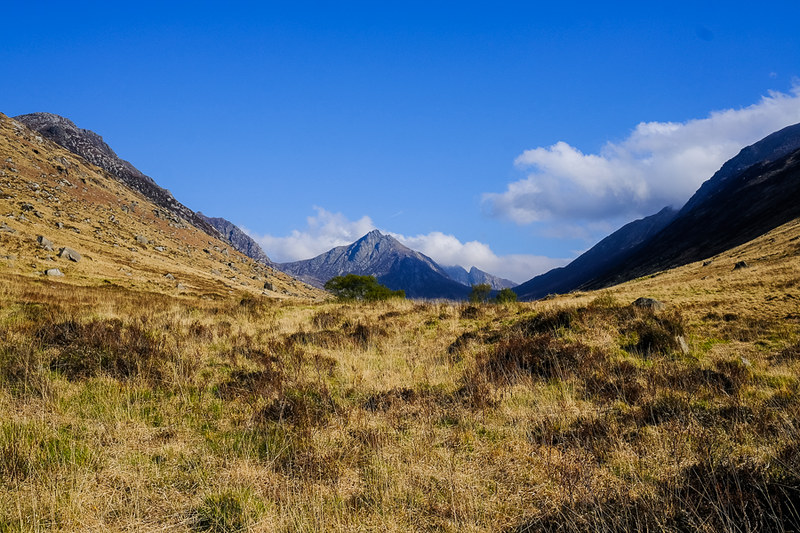 An excellent footbridge takes you over the burn, then a swift left turn down to the path leading up through the deer fence and up by the Garbh Allt burn and waterfalls, bucolic splendour indeed. 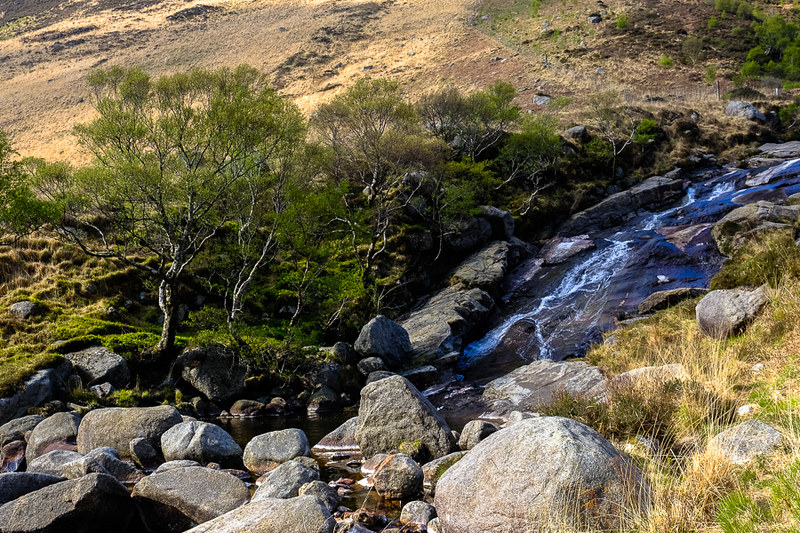 This was the first lung-straining effort of the day, but over quickly. What I did notice was the sudden drop in temperature as the ascent drew in the cool wind, freezing the odd drop of sweat that I might have accidentally shed. I was glad I'd kept the jacket on.
At the top there's a boggy plateau, and muddy path trails run alongside the burn, before turning off north after about 400 metre, towards another deer-fenced off plantation, with kissing gate to get in. I crossed another burn then a large deer fence stile, an interesting job with a feisty Border Terrier tucked under my arm (she was cross with me as I'd forgotten her treats that keep her going and she was having to make do with bits of chicken sandwich instead - poor thing).
And this is where it all went pear-shaped (to a degree). Instead of following the burn further, until the main path developed (and as the map clearly showed, had I bothered to look at it), some unknown force led me away and over boggy heathery slopes onto the ridge on the far horizon. At least the views were getting even better, Goat Fell appearing above Cnoc Breac 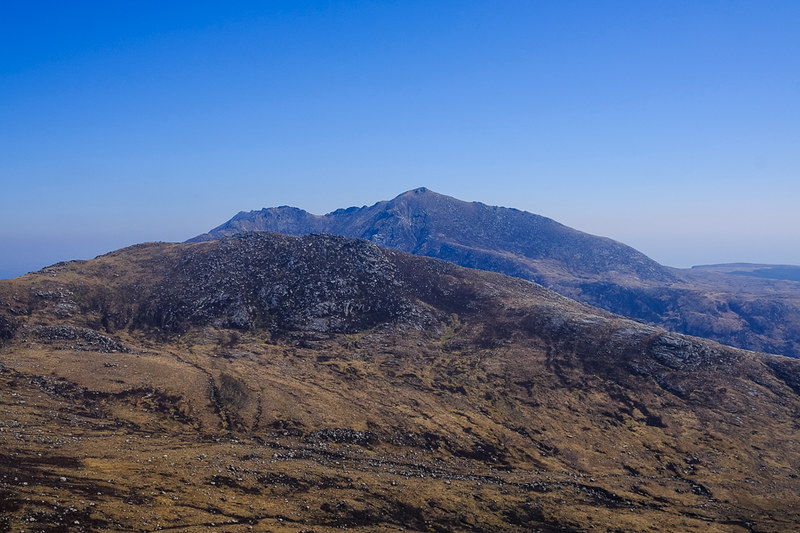 'Twas not a major issue, as visibility was perfect, and the ridge ended up on the same bealach as the path, just before Beinn Nuis. However, I reckoned it added on another 30-40 minutes due to the nature of the pathless tough terrain, and when we got to the top the wind was howling, almost a hat and gloves job.
Ploughing on to the summit of Beinn Nuis was hard work in the wind and fairly steep in parts. Looking back I could see the sad remnants of the USAF bomber that crashed here in 1943. From the summit however, the views opened up, and we spent a few minutes lying in a sheltered spot and drinking it all in 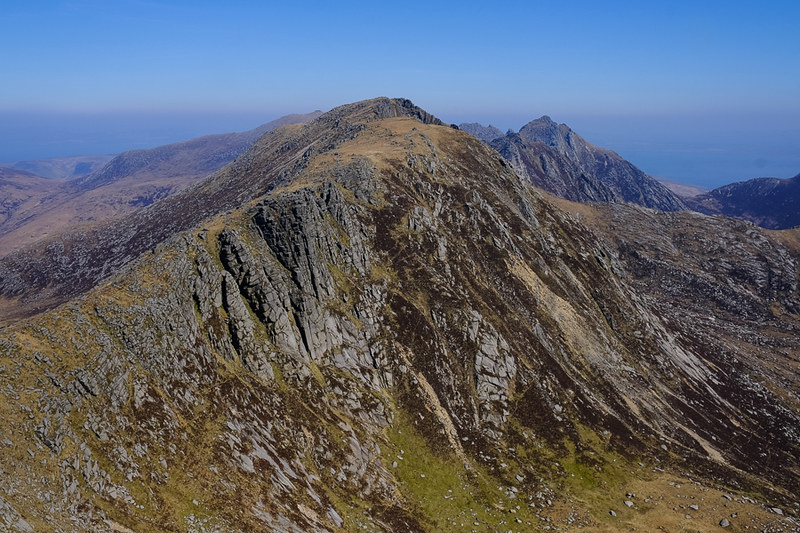 From here it was a straightforward descent and ascent to the first of the two Corbetts, Beinn Tarsuinn. Sadly I didn't see the Old Man rock formation, mainly because I had no idea what I should have been looking for I suppose!. Again, superb views across to Goat Fell: 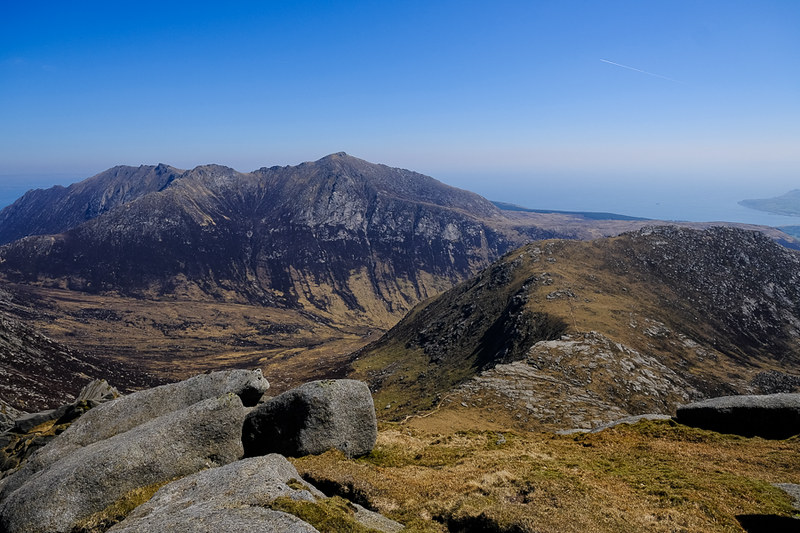 And along the ridge to A'Chir, Cir Mhor, and the distant summit of Caisteal Abhail, climbed the day before from North Sannox. 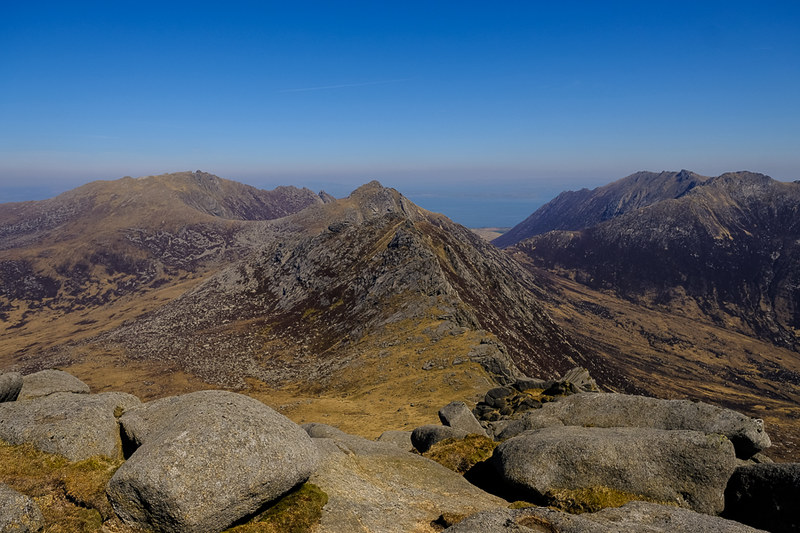 Zoomed shot of the Witches Cleft: 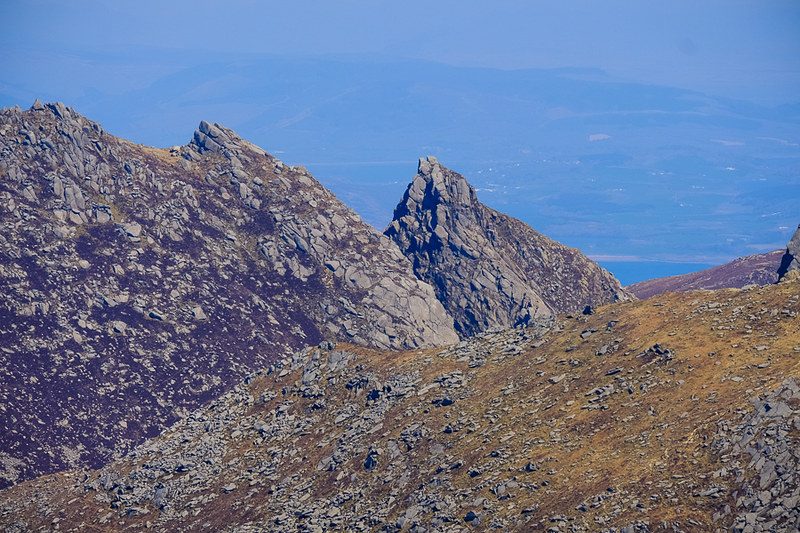 Now, the official WH description of the descent from Beinn Tarsuinn is not very flattering, and it was indeed all a bit of a scrambly graceless mess through the boulders. Not helped by having to retrace my steps several times to grab a rebellious small hound and help her down the larger drops. Would be better coming up that way in future I think.
The descent leads to a bealach where those of sound mind choose to keep left on the bypass path, clearly visible here: 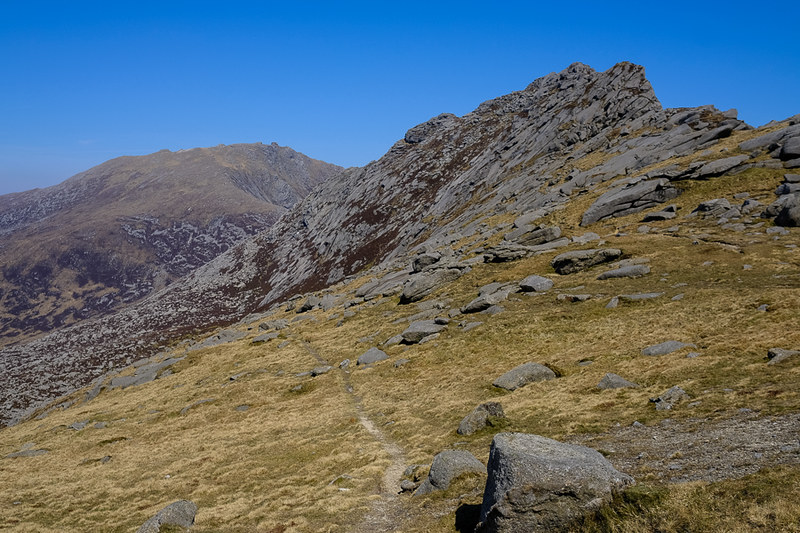 The way ahead is the ridge over A'Chir, and that way madness lies unless you're bedecked with helmet, ropes and plenty of Kendal mint cake. (And bicycle clips).

The bypass path takes you down a reasonable way, across some slabby bit which need a little care, and then climbs out and up to the bealach between A'Chir and Cir Mhor. Whilst traversing the bypass, the combination of being in the lee of the wind and full blast of the sun led to a sudden increase in temperature of about 20 degrees, or so it seemed. This was quickly reversed once at the bealach.

Cir Mhor summit slope from the bealach, Goat Fell to the right: 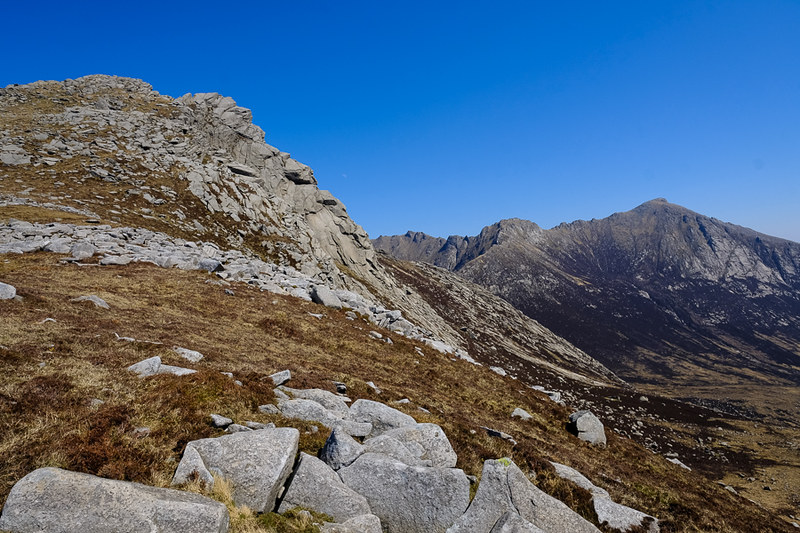 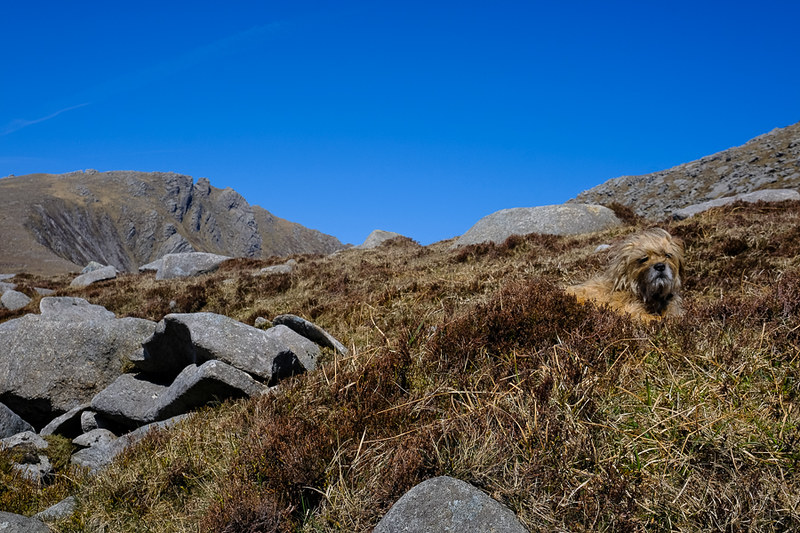 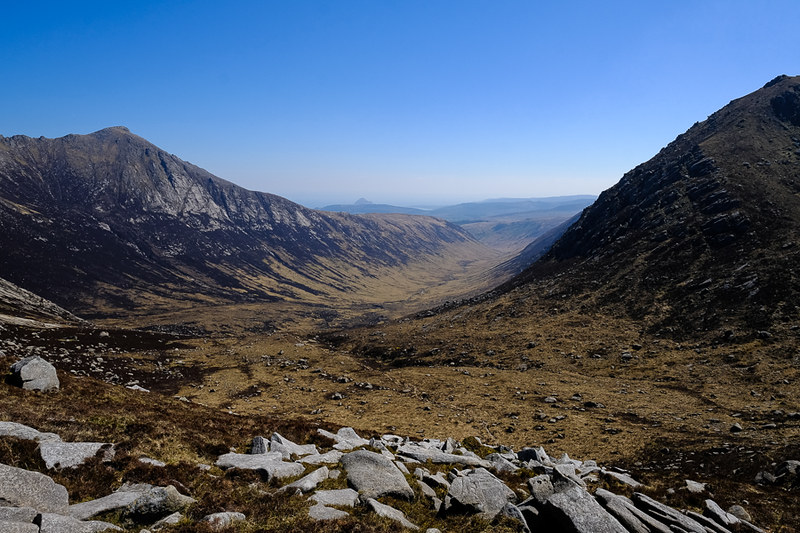 After another pause for food/drink/photos I set off up Cir Mhor. For normal people this is straightforward. I free-styled by actually setting off along a traversing path, for some reason I have no recollection of. After about 100 yards I realised that the ascent was a little easier than it was supposed to be, and that the path showed no signs of bending round to go up the mountain ... so it was off through the heather again and upwards, eventually meeting the real path up the mountain. This is a much easier ascent then the views of Cir Mhor from Goat Fell or Caisteal Abhail would suggest - the ascent from the east side is much harder I believe. At the top there is a small scramble to reach the true summit, and what a wonderful airy position it is.
Caisteal Abhail:

Goat Fell and Glen Rosa in all it's glory: 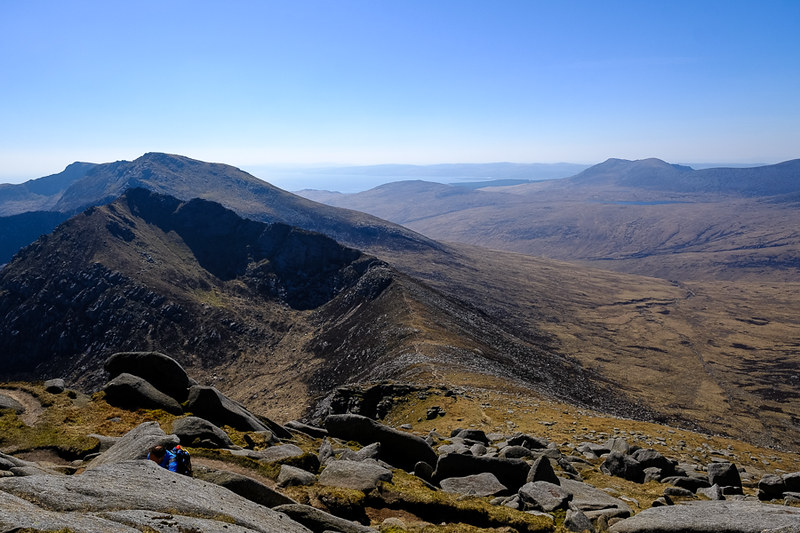 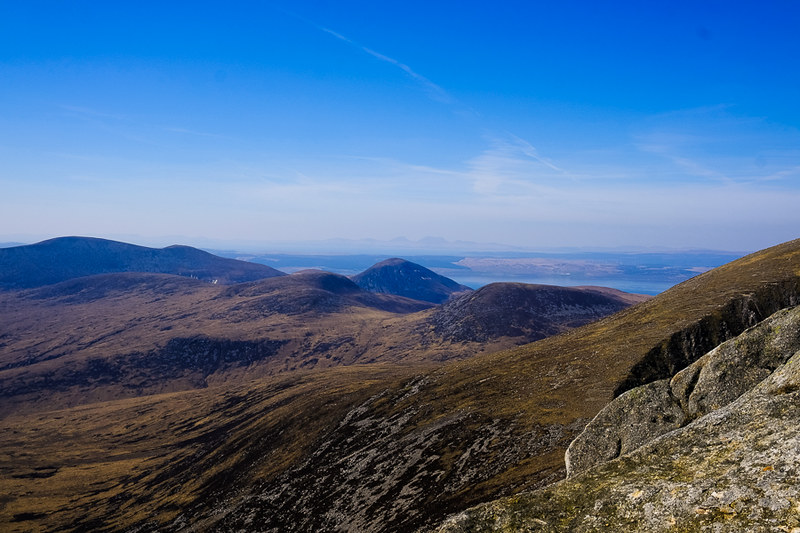 I spent ages there, drinking it all in. Maisie managed to scramble up there solo as well. We were joined by a friendly walker, come over from East Kilbride for the day, and we swapped a few stories as old gimmers tend to do.

Sadly it was time to leave and wander down, retracing steps to the bealach, and then down the excellent path into Glen Rosa, all the way back to the first footbridge and thence to Cladach.
But not forgetting to turn around for final views: 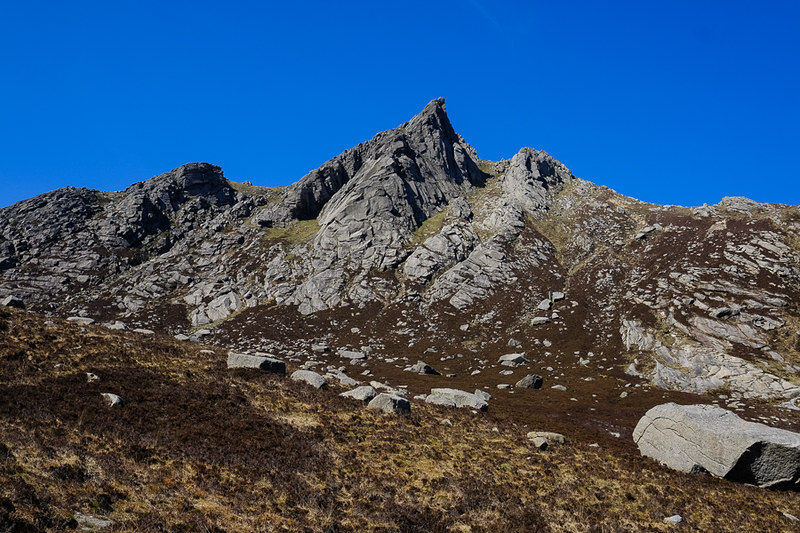 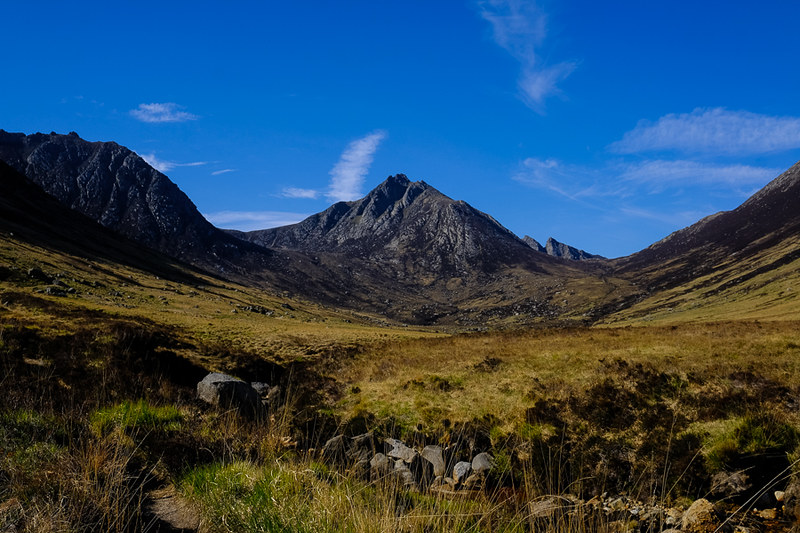 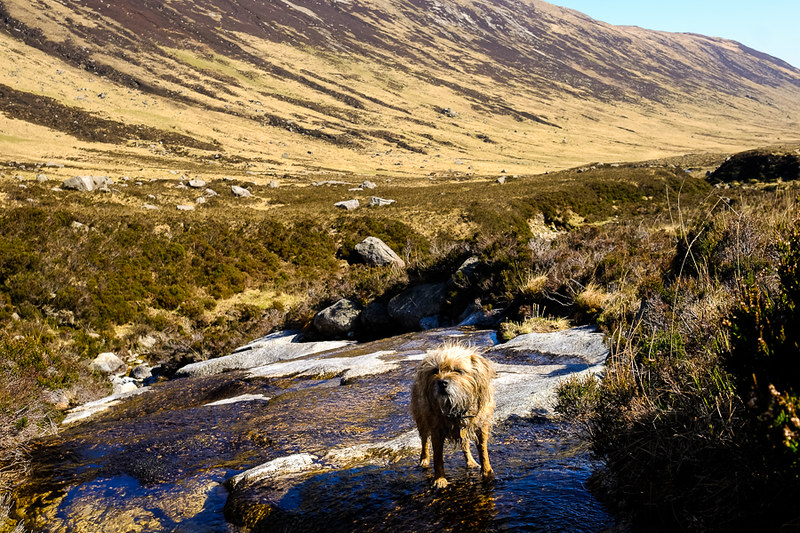 What a beautiful place.

Oh, and the brewery shop was closed by time I got back. But the lingering and faffing about were all worth it.

To see this fine Island in weather like that makes the heart beat faster....looking forward to June

Didnt get as good weather as you for these a few years ago, but it was a great walk from what I remember. We were staying in the Kennels lodge in the grounds of the castle. Must go back again I think as your pictures make it look great.

Wonderful, some great crisp photos there.

I really need to get back to Arran, have barely touched the surface. I do remember the brewery being great though!

Just need to get my backside over there.

PS did you see me waving to you from Gourock???

I`m glad you had the greatest of days on Arran

What tremendous weather you had and the photies are brilliant mate !
They`re all big walks over there, once you go by Goat Fell. You`ll be glad you didn`t have to rush back for the ferry !!