On the way to spring WH meet, we popped in to Ballachulish, to climb two local Grahams, Meall Mor and Sgorr a'Choise. Technically, they are part of Glen Coe and could be combined with Sgurr na h-Ulaidh/Meall Lighiche traverse, but that's an option for madmen

Having ticked off the two higher hills, we decided to do the Grahams separately, as a half-day walk. As weather was not fully cooperative, it turned out to be a full blown adventure, with lots of ascent on wet, soggy ground, raging torrents to cross and finally, a dodgy descent route

On a sunny, dry day, this route would be a pleasure. We had to put up with some unexpected obstacles, but in the end, it was a very satisfying day.
There are different options for tackling this duo. If starting in the village, one could climb Sgorr a'Choise via its rocky west ridge, or work one's way through the forest above Ballachulish to Meall Mor. We preferred the route from Achnacon up Gleann Leac na Muidhe, the same approach as for Sgurr na h-Ulaidh, to the col between the two Grahams, then up Sgorr a'Choise first, then back to the col and up Meall Mor, finally descending NW back to the glen. Not a giant walk, but adding up to almost 1000m of ascent, so no Sunday stroll by any means.

Track_MEALL MOR 21-04-17 13,2KM.gpx Open full screen  NB: Walkhighlands is not responsible for the accuracy of gpx files in users posts
We parked in the car park by the road bridge I call "The risky passage". Really, something should be done about this particular place and I'm surprised the local authorities haven't noticed the problem so far

To reach the start of Gleann Leac na Muidhe track, every walker has to walk over this bridge from the car park. It's on a bend and cars coming from Glen Coe side have very poor visibility - or no visibility whatsoever in bad weather - until they are a few meters from the bridge itself. We crossed to the other side with a bitter taste in the mouth, luckily no speeding car came to knock us down.
The walk in along the Gleann Leac na Muidhe track (and by-pass avoiding private gardens) was pleasant and easy, despite drizzling rain: 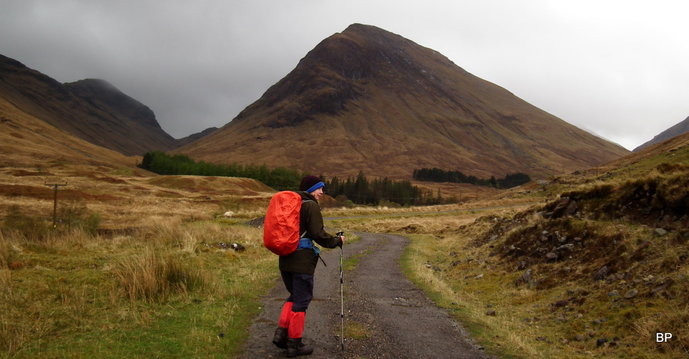 Wee lambs hiding from the rain: The plan was to reach the path climbing up the col between Meall Lighiche and the Grahams, but for that we had to cross the river. Here, we were unpleasantly surprised by a raging torrent!
Uhmmm, that looks dodgy! but needless to say, I'm one stubborn cat, so I desperately walked up and down the stream, trying to locate a good spot for crossing: Finally, we noticed a small grassy island in the middle of the river and used it to get across, also using pole-vaulting techniques with our walking poles and dancing-balancing skills on slippery stones On the path up to the col. The second river (which usually is just a dripping stream) looked just as badly in spate, but thankfully, it was easier to cross above the imposing waterfalls in this photo:

The climb to the col was then very simple, though the ground was so squelchy, I decided to wear my waterproof trousers. When we reached the bealach, the drizzle stopped at last and the cloud was beginning to lift - our hopes for views were restored!
Ballachulish revealed:

We decided to go to Sgorr a'Choise first, turned left and climbed up the wet, grassy slope. From this side, Sgorr a'Choise reminded me of Pap of Glencoe, a breast-shaped bump in the ground: The final slope seemed steep, but all hills in this area are steep, so we didn't complain

There is a high fence crossing the upper shoulder, but a stile for hillwalkers is provided: We clambered over the stile and pushed on. The slope is steep, but mostly grassy and climbing, even on a wet day, provided no problems. We followed a faint path by a line of old, rusty fenceposts.
Looking down from the slopes, Sgurr na h-Ulaidh on the horizon: 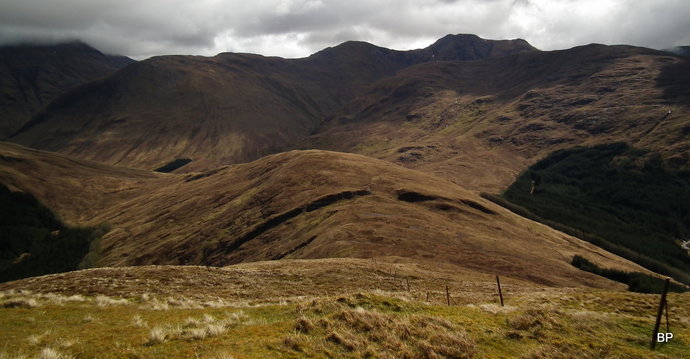 The summit of Sgurr a'Choise is topped with some rocks and one could practice scrambling here, but a well-worn path avoids all obstacles:

Wow, views are getting seriously good! Soon we were on the small summit area, I stopped on the first grassy lump to record some panoramas. The dark cloud was still hanging above Glen Coe hills, but conditions were improving every minute: On the summit (the cairn is perched on one of the grassy lumps) with Beinn a'Bheithir in the background: Kevin on the summit - his 71st Graham: 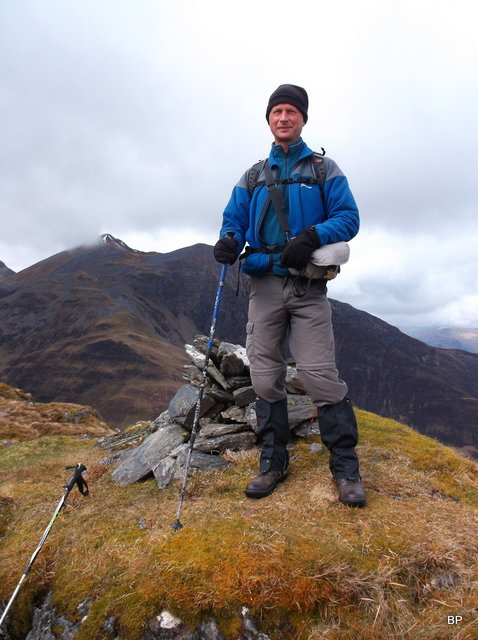 It was windy on the top, but the bumpy terrain provided ample sheltered spots for a tea break. Another group of walkers arrived from the west as we chewed our way through our sandwiches, but they said they were not going to Meall Mor. I wasn't surprised to see people on Sgorr a'Choise, it's such an interesting, shapely hill, opposite to its rounder neighbour.
Before we left the summit, a few panoramas...
Kevin and the Glen Coe peaks:

We took a slightly different line of descent, over Meall a'Bhuige, hoping that the ground would be drier here, it was a bit:

Kevin was complaining about hunger, obviously 2 sandwiches were not enough for him, he kept digging in his pockets, finding countless sesame bars, halva snacks, etc. To his excuse, the slopes of Meall Mor are pretty steep, too... I couldn't but gaze at the superb view down to the classic shape of upper Gleann Leac na Muidhe: The summit of Meall Mor is situated on a long, rocky spur:

A shower was passing over as we neared the summit, so we geared up for the rain:

Pap of Glencoe and the Mamores from the summit of Meall Mor:

Five minutes break on the summit: For the descent, we had two options. We could retrace our steps back south, to the col between the two Grahams, but I dreaded the perspective of having to cross that raging torrent of a river in the glen! Kevin was convinced, studying the 1-25k map, that dropping down straight to Glen Coe should be possible, if very steep.
We started descending very carefully, over grassy ground, stepped over a low fence and then followed its line: Beautiful views down to Glen Coe: After about 100m of descent, we left the fence and descended very slowly, checking every step, along a small stream. Lower down, the stream cuts a deep ravine into the steep slope, but the right-hand side of the gorge is mostly grassy (some dead last year's bracken, too), so we assumed it would be a go, if at snails pace.
I'm just a Panther... Get me out of here!!!!! It took us awfully long to reach less steep ground and later, when we looked at the notorious slope from below, it actually didn't seem so bad!

We crossed the meadow back to the track, trying not to disturb sheep tending to little lambs:

The final notes of the Ballachulish Rhapsody arrived in shape of a high-pitched, squeaky sound that came out of my mouth when speeding cars passed us on the dodgy bridge. Thankfully, we survived that last passage without any damage and could then pack up and drive to Kinlochleven, where the WH meet was about to begin

Nice! We did this pair from Ballachulish back at New Year and enjoyed them too. Meall Mor is more interesting than it appears from the road (well, a bit anyway).

jmarkb wrote:Nice! We did this pair from Ballachulish back at New Year and enjoyed them too. Meall Mor is more interesting than it appears from the road (well, a bit anyway).

We considered the route via the western ridge of Sgorr a'Choise, but I was put off by the perspective of trudging through the deep forest on the lower slopes of Meall Mor on the way back... Somehow we thought the Achnacon approach would be easier, well, the descent was hairy!

These two are both more interesting than they look from the distance.

BlackPanther wrote:We considered the route via the western ridge of Sgorr a'Choise, but I was put off by the perspective of trudging through the deep forest on the lower slopes of Meall Mor on the way back...

The ridge is good, though gaining it is quite rough and heathery (we took a short cut to point 407 rather than heading for the lowest point on the ridge). The descent was fine: there are tracks through felled forestry to the mast on Am Meall and then a wee path down the N side of the fence line to the back of the big quarry.